You win some and you lose some.

I'm a bottom feeder when it comes to vintage watches.  That means I like to pursue ugly ducklings in the hope they are diamonds in the rough.  Most of the time it works out but sometimes it doesn't.  I try to purchase project watches for about as much as the cost of a round of golf - that way if it doesn't work out I'll at least have a little more to show for it than when I finish a round of golf (nothing but a scorecard).  I can always use a spare movement to complete a watch.

I know I'm not alone in the pursuit of fixer uppers but my advice to new collectors is to pursue watches that are already restored - that way you know what you're getting.  I follow that advice myself sometimes but, like I said, I'm a sucker for a good deal.

The one thing I don't do is purse watches with bad cases.  In most situations it costs way too much to restore a case. 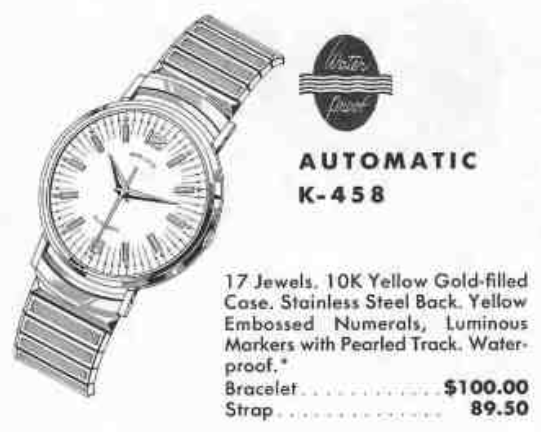 Initially the K-458 was produced on a strap or a bracelet but by 1960 it was only available on a bracelet.

Inside you will find the 17 jewel Hamilton 661 movement.

My project watch arrived pretty much as described... not running.  It looked fairly good though and I thought it would clean up nicely.  However, some important details were left out. 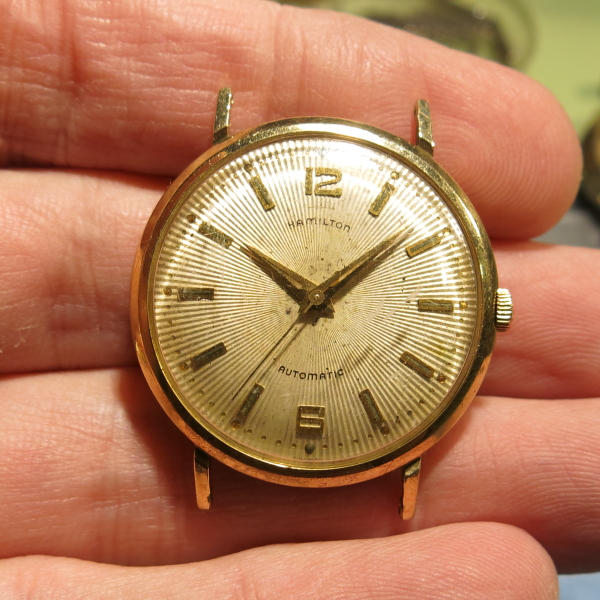 As a model with a 5 as the second digit, you know the K-458 has a stainless steel back.  When I went to open it, the back just spun, and spun, and spun, without coming off.  When I turned it the other direction, it wouldn't tighten either.  If I had paid more for this watch I would consider returning it as being "other than described" as this is an important detail that the seller omitted. 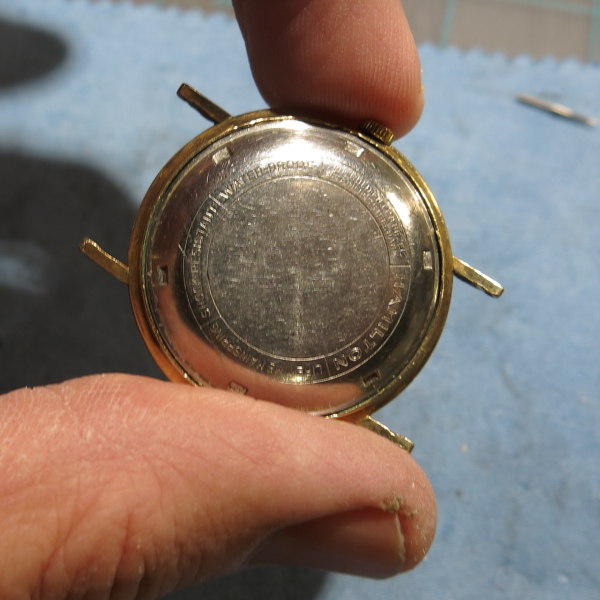 Eventually I was able to get the back cover off and reveal the movement within.  The 661 is dirty but it's not rusted.  So at least I can use it as a spare, assuming I can get the movement running again. 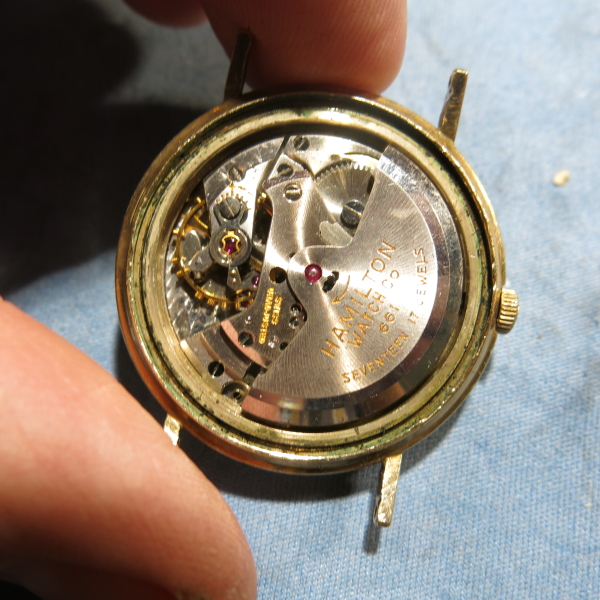 Once the movement is out of the way, you can see that there are no threads left inside the bezel.  I'm not exactly sure if there's a fix for this situation or not.  I'll worry about that later.  First I'll clean the movement and the case and then reassess the situation. 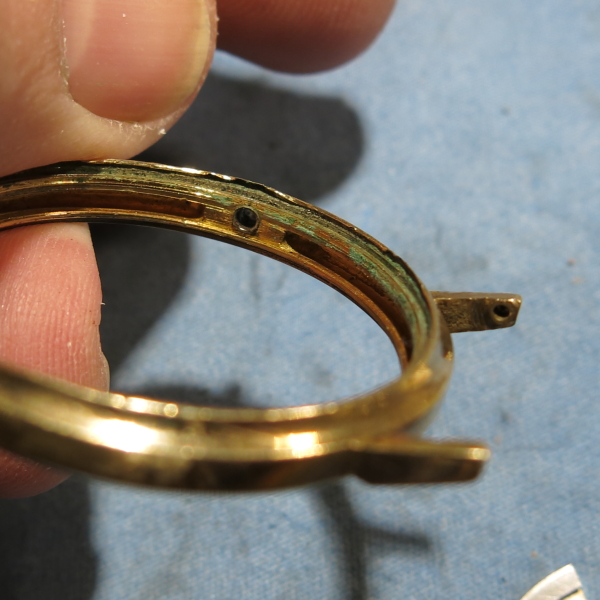 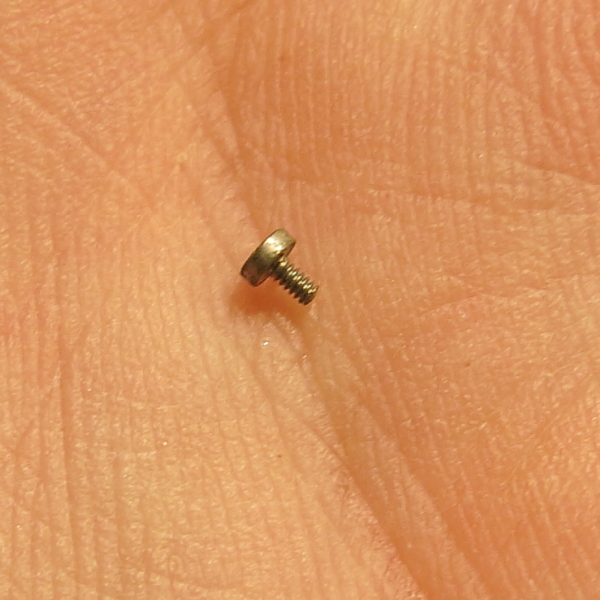 Everything is cleaned and dried.  Hopefully I'll have a working movement the end of this project - at a minimum. 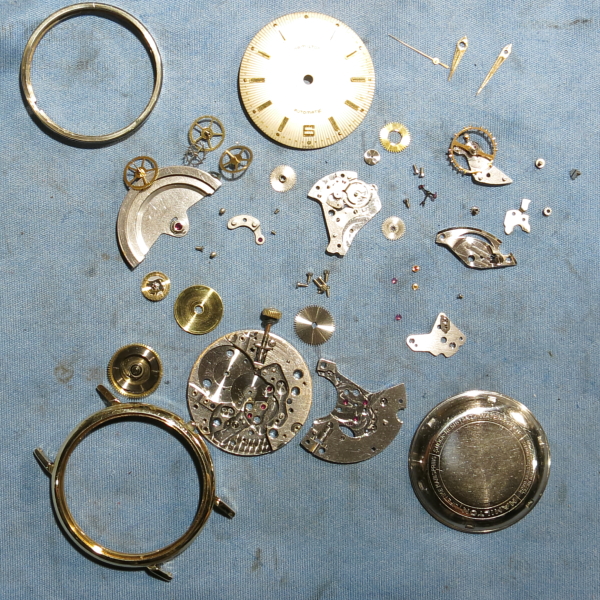 My latest purchase of PHD crystals included a bunch of packets without the dimensions on them, just the PHD numbers.  A 27-1/2 equates to 29.7mm and I'll use this to replace the beat up crystal that came on the watch. 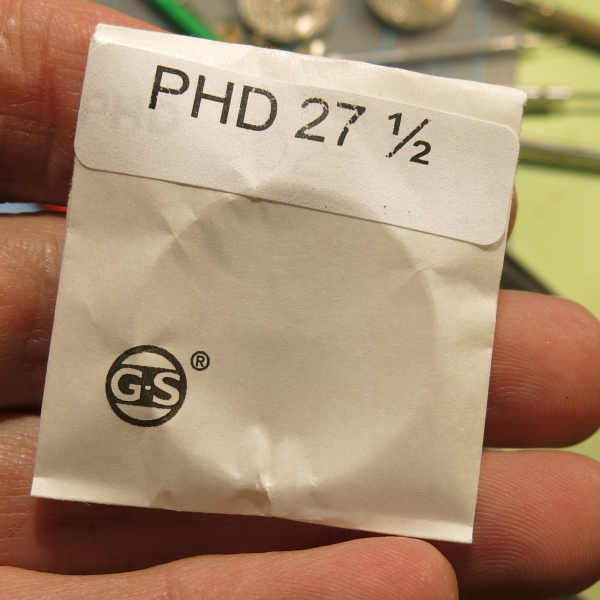 The balance has shock protected jewels and the trick to reinstalling them is to make sure you put the cap jewels back on correctly.  The cap jewels are like tiny tiddlywinks - and they are exceptionally easy to lose.  The jewel is slightly domed and the domed side goes against the shock spring.  You the can tell which side is which by looking for the side with a little ring on it.  The smooth side goes against the shock spring.  In the shot below you might be able to see the little ring. 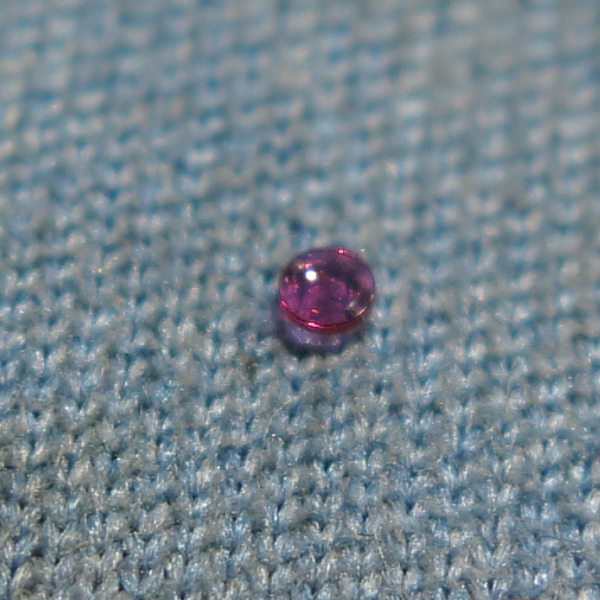 The movement is now running nicely, even without jewels in the balance cock yet.  Next I'll put the jewels in, oil them, and then put the movement on the watch timer. 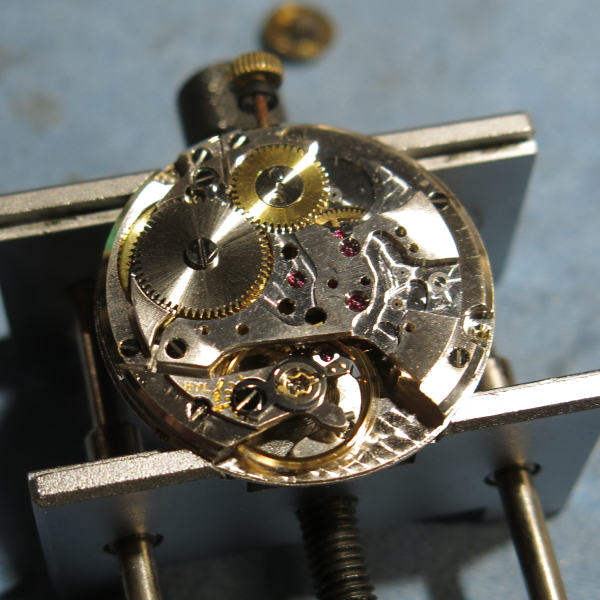 All that's needed is a slight tweak to the regulator to speed it up.   Everything else looks great. 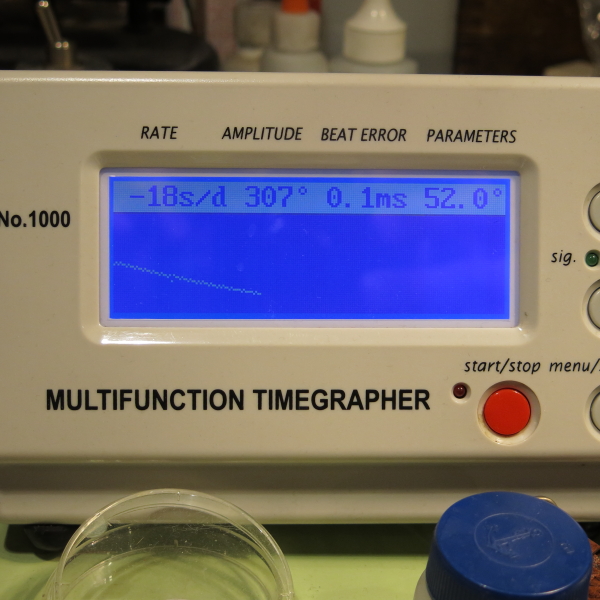 The movement and movement ring go back into the case.  Now I have to figure out what to do about the loose case back. 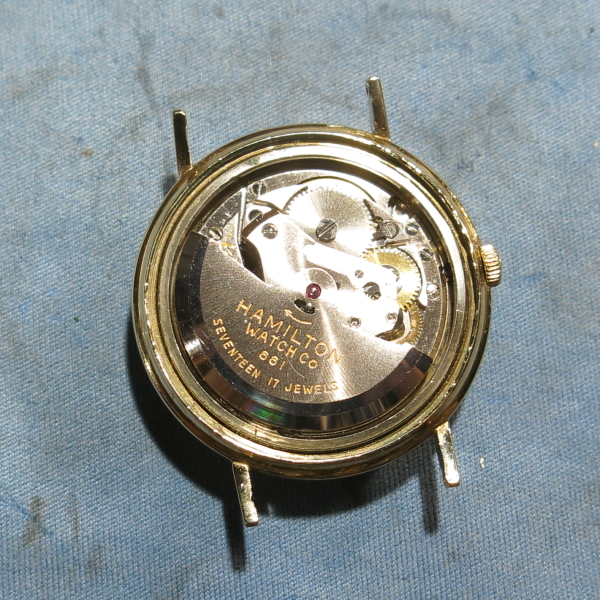 It occurred to me that if a crystal can secure the front of the watch, then why can't another crystal secure the back?  A slightly larger crystal at 30.4mm is just larger than the stainless steel back. With the crystal installed in lieu of the back cover, I guess you could say that this watch now has a "display back"... which is actually pretty cool. 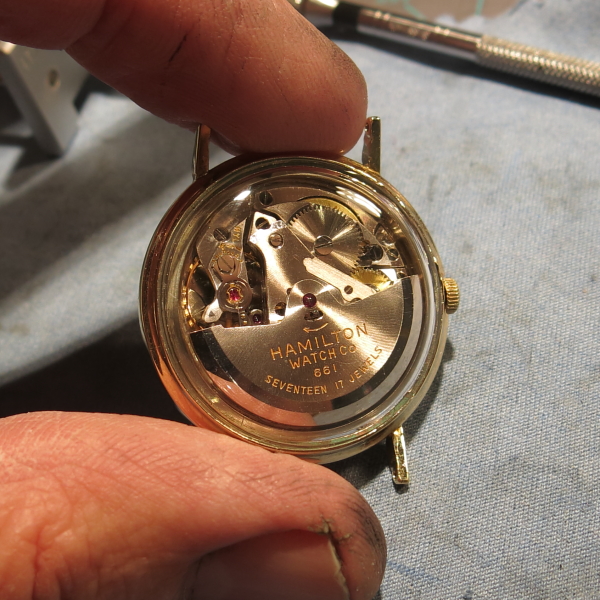 With crystals on top and bottom, you have to look at the lugs to tell which side is up. 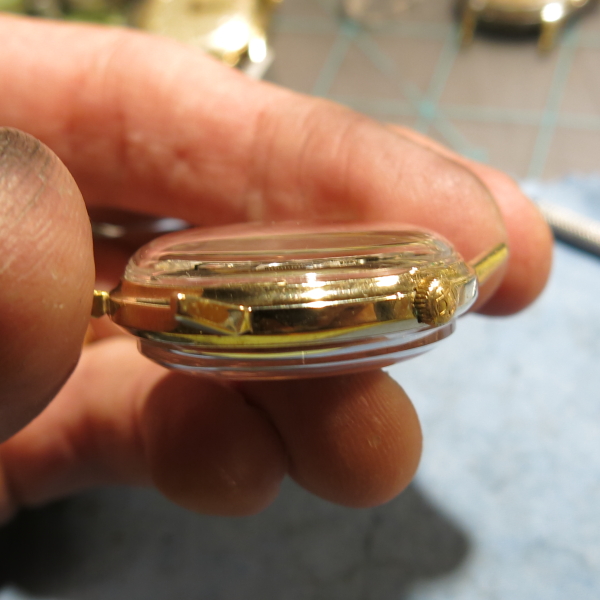 From the front, the restored watch looks very good with a fresh alligator strap and new crystal.  The lume on the hands is old and it took me a while to figure out the rectangular section of the hour markers also has old lume.  It might look better with fresh white lume.  I thought about changing it but I'm not sure I could apply fresh luminous paint cleanly enough so that it would look as good as the old lume. 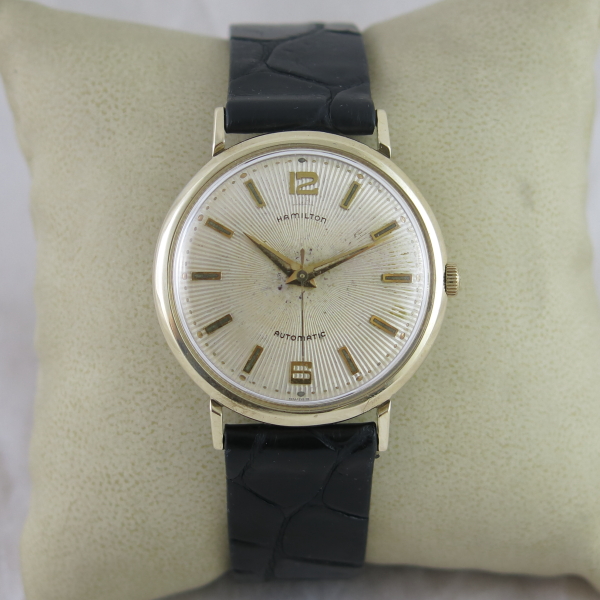 The display back is really interesting.  I love being able to see the movement but I don't know yet if this will be a good long term solution. 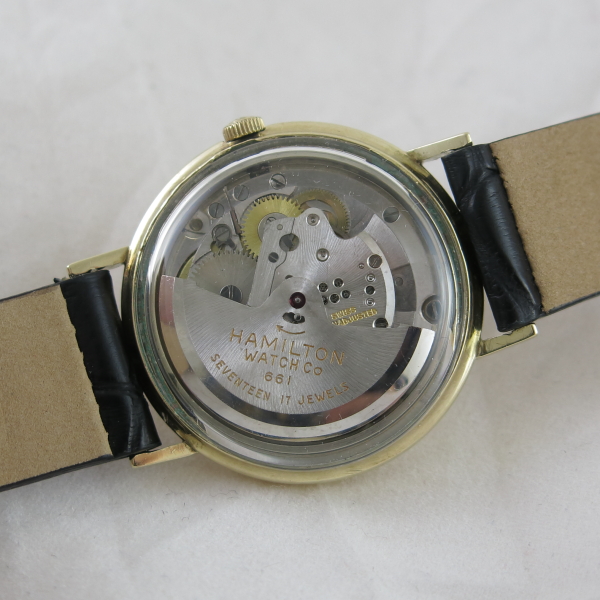 Did I make lemonade from this lemon or should I call it a day and use this movement in another worthy cause with a better case?