If I had to guess which movements are the hardest to come by they would be some of the calendar models.  It's a complication that's typically added to a basic movement, manual or automatic.  There aren't that many calendar models and there are several possible movements so that makes them much less common than the basic models. 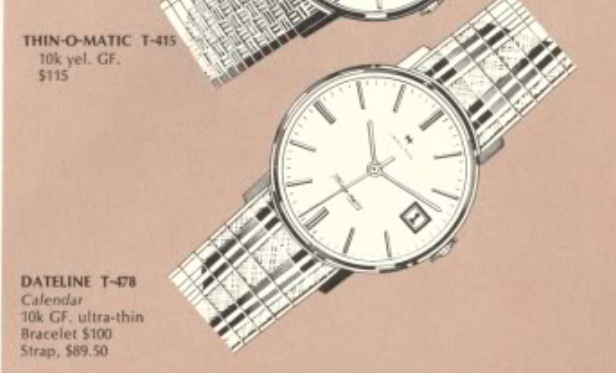 The T-478 came in a 10K yellow gold filled case on either a strap or a matching bracelet.

The 624 movement inside the case is based on an ETA 2522 movement and it's also a Hamilton caliber 74. It looks a LOT like the 694 movement, which is also ETA-based and is a caliber 64, but it's quite different as you will see below.

My T-478 came as a project watch from a new collector who received a family piece.  Its hard to say if it works or not, as it's missing the crown and male stem.  The crystal is deeply crazed and will definitely need to be replaced.  I would guess by the texture of the strap that it's a shark skin strap, but it's hard to say anything for sure, other than it's old. 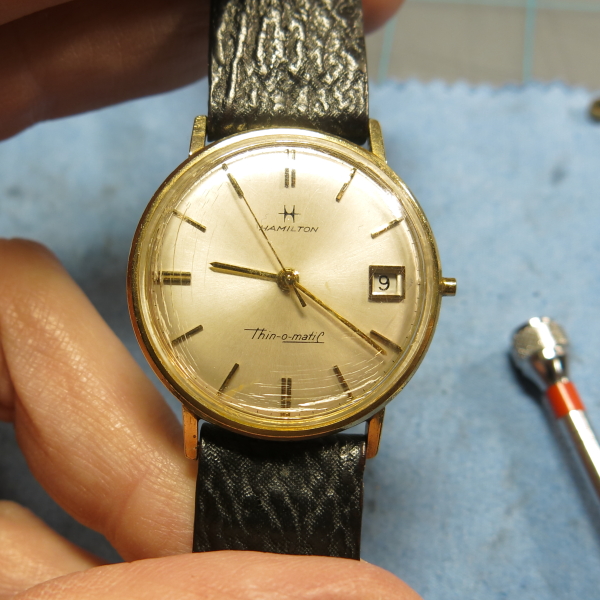 The case is a one piece design and based on the slight dome it's a safe guess that it's got an ETA movement inside and not a Buren micro-rotor.  A micro rotor case would be flat across the back and makes for a really thin Thin-o-matic. 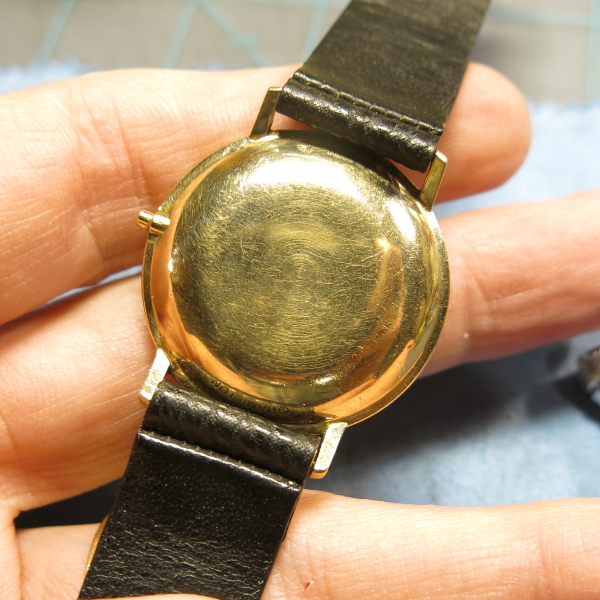 What's this?  A Bulova strap on a Hamilton watch!   Better than Elgin, I suppose... ha ha! 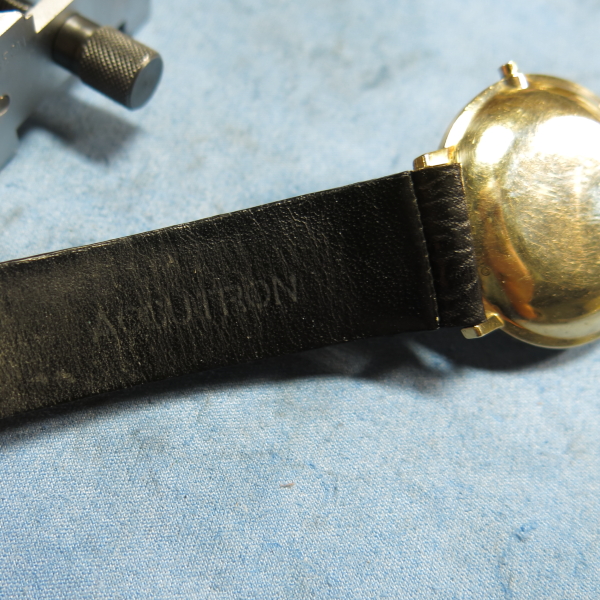 With a little unexpected blur my photo of the movement would make you think this was a more common 689 or 694 movement.  The non-calendar version of the 624 is the 623... and it's quite a bit thinner than the 689 but looks quite similar. 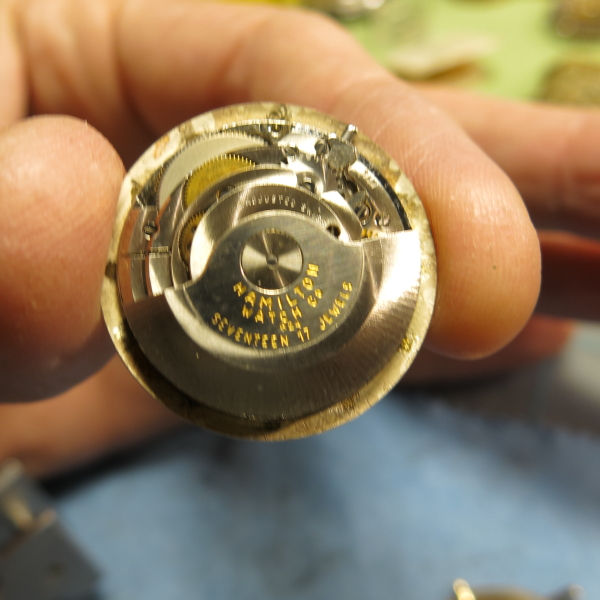 With the dial out of the way the calendar complication looks familiar but it's actually quite different than what you'd see on other ETA movements. 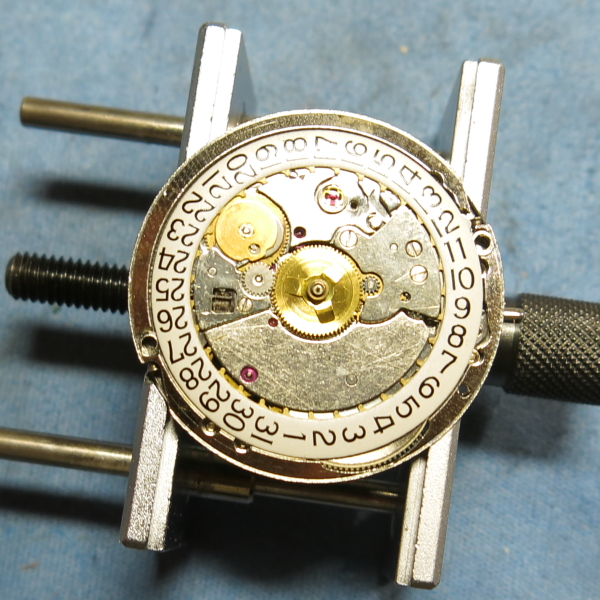 For starters, the index lever to jump the date wheel from date to date is over on the stem-side of the movement.  Still has the dreaded spring that I've been known to lose from time to time.  There's another spring on the other side, by the 26 number, that is used to push the date wheel at midnight. 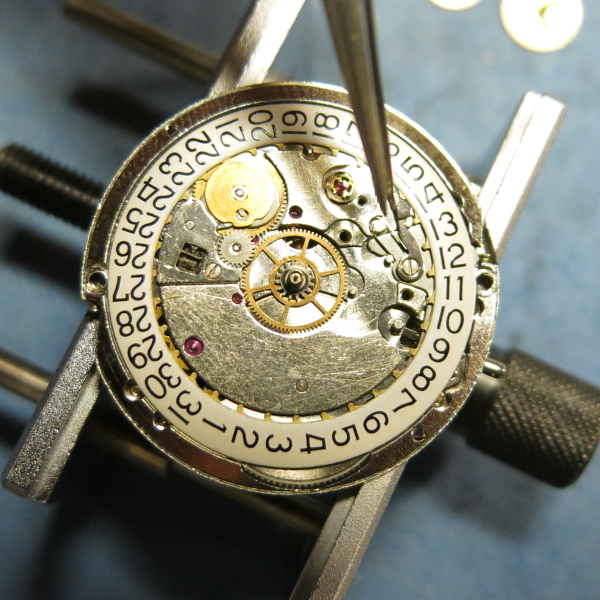 I should have flipped this photo 180 degrees as it look upside down relative to the photo above, but all the parts are removed except the set bridge... which actually fell out after I took this photo and took a mini-vacation in my shop for a few hours.  I eventually found it on the floor behind my chair.  The set bridge is different than a set bridge from a 623 though - so I had to find it in order to get the watch back together.  Losing parts temporarily is all part of the "fun" of working on watches... as I'm sure every professional watchmaker will attest.  That's why it pays to keep the workshop clean. 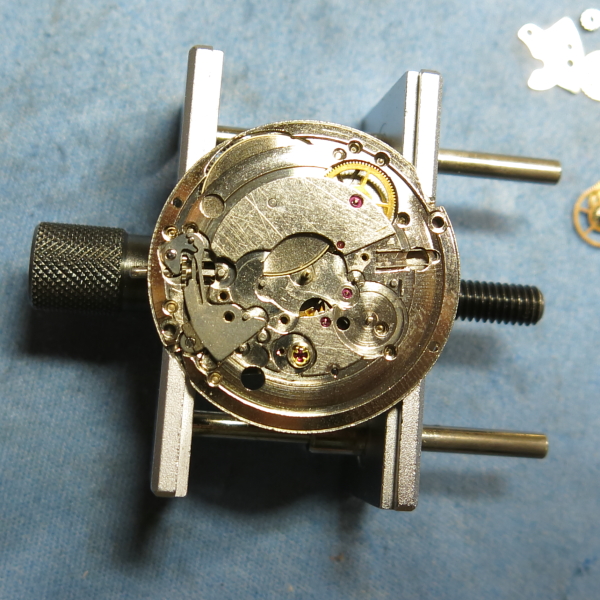 Flipping the watch over, after removing the oscillating weight assembly, the movement looks familiar but also different.  Check out the silver winding wheel that engages the golden ratchet wheel.  The big teeth on the winding wheel actually look like the teeth on an 800 series automatic, but it's moveable like on the earlier 694 movements.  It's a bit of a hybrid design. 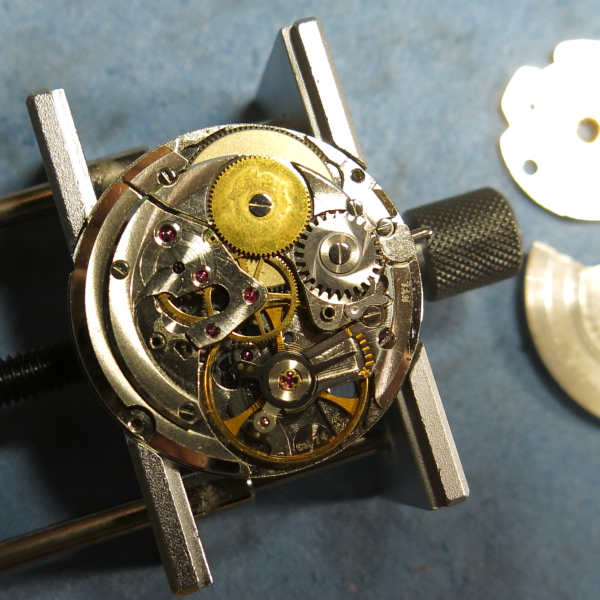 Everything is cleaned and dried... well, almost everything.  Do you see the set bridge?  Me either.  I actually looked at this photo to try to determine when it disappeared. 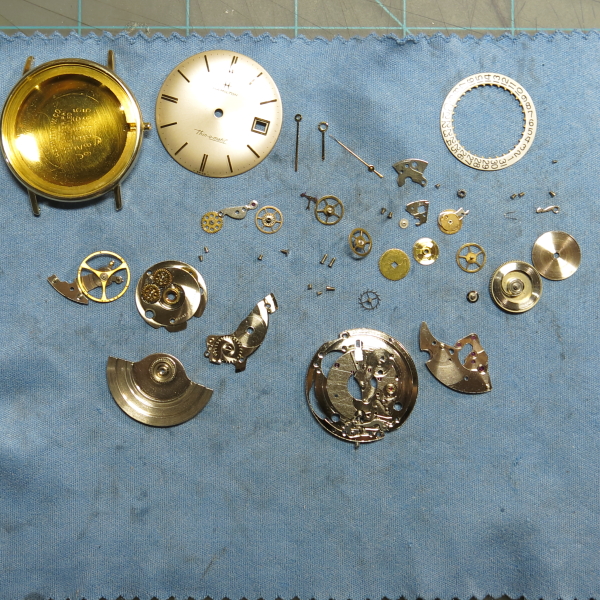 Putting the train bridge back on is just like all the other ETA automatics... all four wheels have to be perfectly aligned before the bridge falls into place.  There's no force needed, just get the pivots into their respective places. 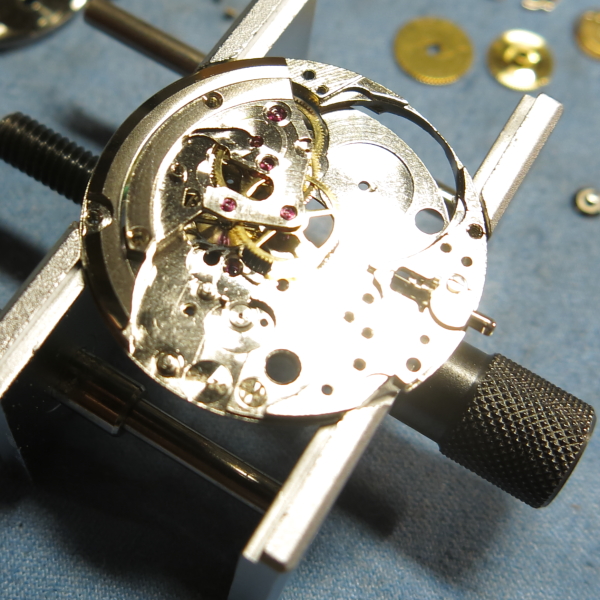 The barrel, barrel bridge, pallet fork and it's bridge all go in next.  I'll put the golden ratchet wheel on and give the watch a few winds to energize it. 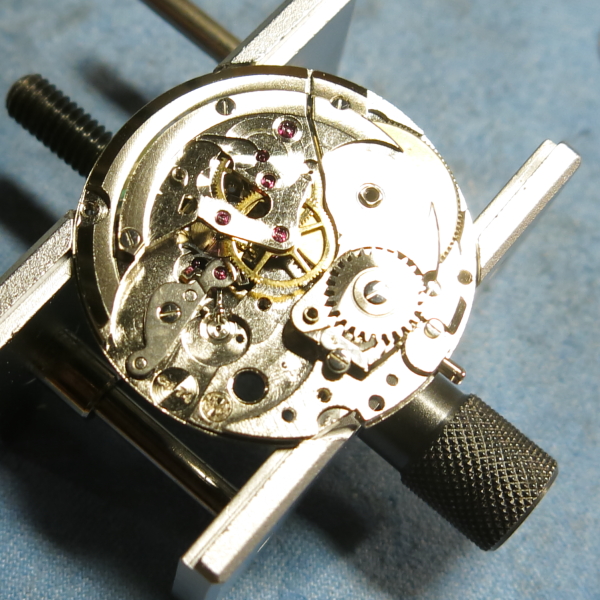 I put the running watch onto the timer... it was running a little oddly so I re-cleaned the hairspring. 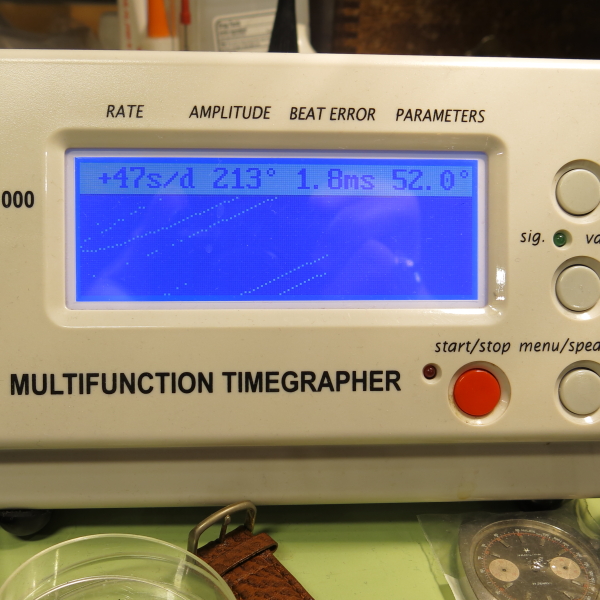 A few tweaks to reduce the beat error and the watch is running fairly well.  The amplitude is low though but that's because I didn't wind it very much. 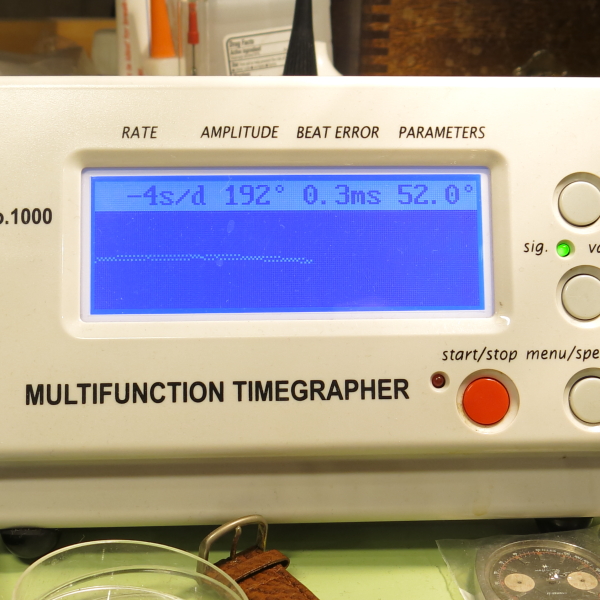 A more substantial winding brings the watch back to life.  This is a good exemplification of why you want to wind an automatic fully by hand before you put it on your wrist.  That way you get the best performance and the automatic just keeps it topped off. 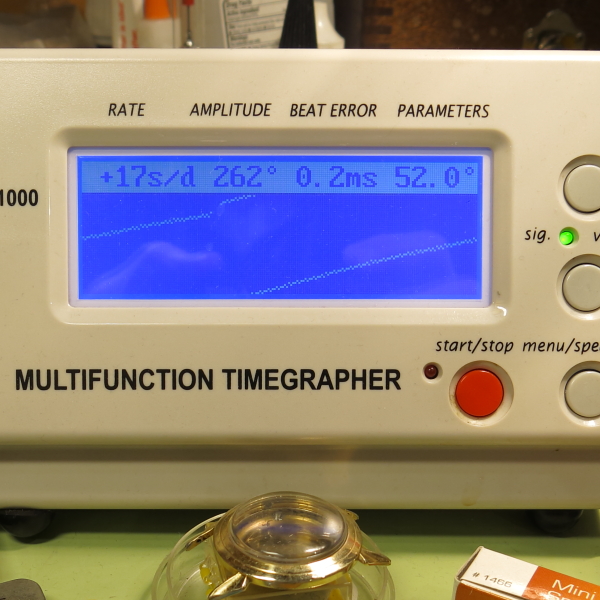 I fit a new male stem to a new crown.  I like to use waterproof crowns with a medium tube is this situation so the tube on the crown is supported by the stem tube on the case and I don't get too much wobble when setting the time. 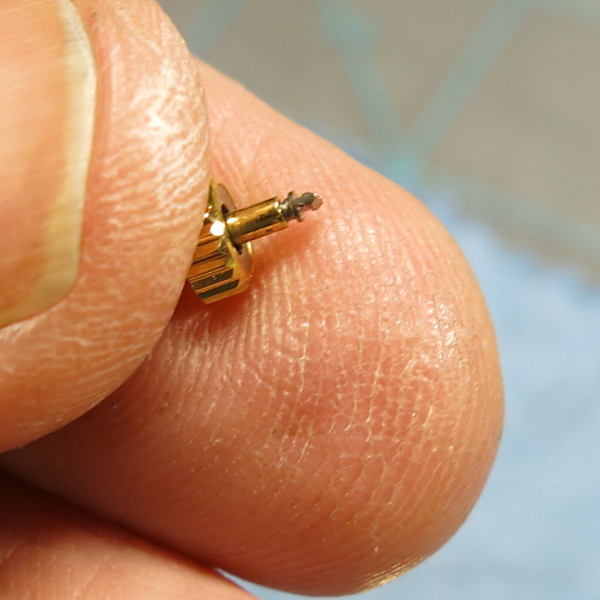 The rotor can go back on now... it gets in the way of making adjustments but I'll leave the watch running as it is for now. 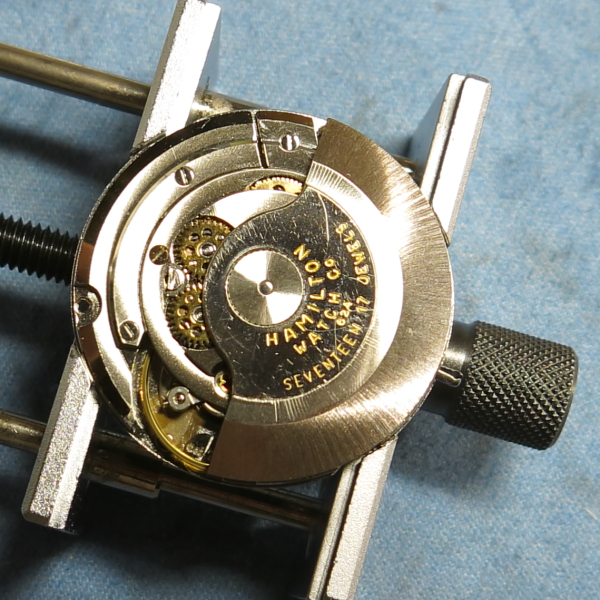 This watch takes a 30.8mm crystal... not the biggest crystal I've used, but close. 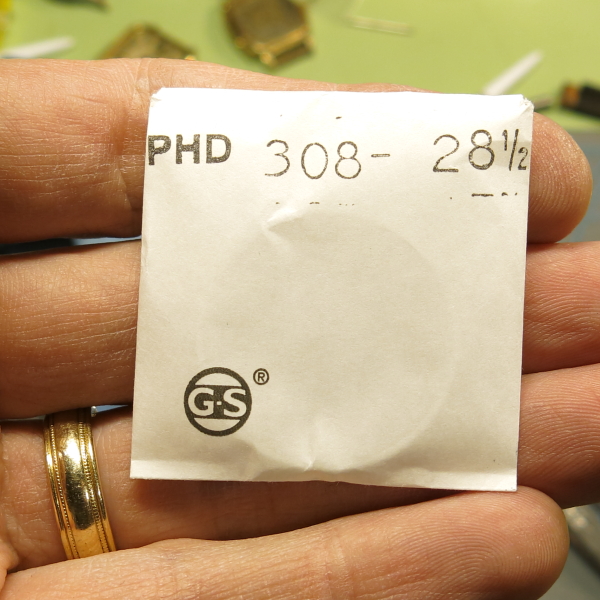 As you can see, with a new crystal, a fresh strap and a crown, this watch looks like it just left the showroom case.  I'm sure the owner will treasure this family watch now that it can actually be worn. 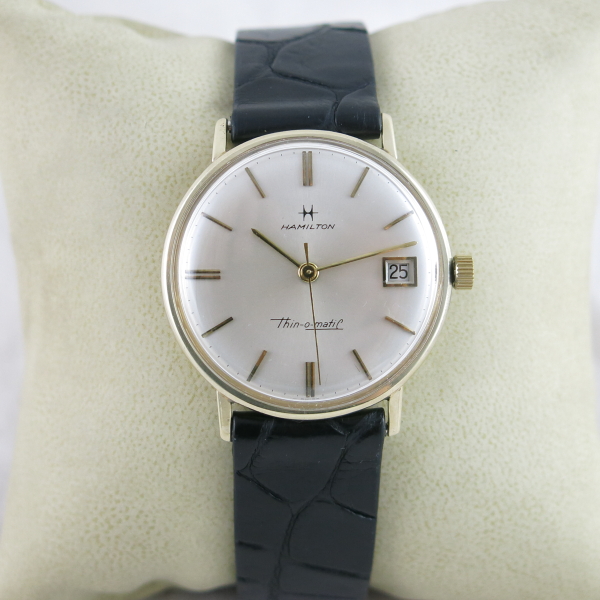