It's not often that I land a post-1969 Hamilton model.  Designs got a little chunky and clunky in the 1970's and a lot of models just aren't that interesting to me.  There are lots of great models though, especially chronographs and dive watches.  But just like cars got a little goofy looking in the 1970's, a lot of watch models did too.

I do occasionally go after decent-looking project watches from the 1970's if the price is right and recently I was able to get an interesting model with a new movement to show on the blog.  It's a 1973 Auto Cal Reliance.  It was made through 1976. 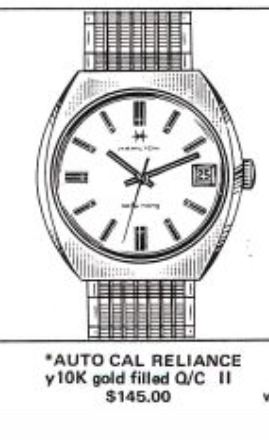 There are several Auto Cal models and some have cool names like Reliance, Patriot, Valiant and Sovereign.  The Reliance is interesting in that it has a 10K gold filled case rather than an RGP case like so many other watches from the period.  It has a Quick Change II movement that allows you to change the date by pulling the crown out midway between the time setting position and watch winding position.

My project watch arrived without it's original bracelet.  It was without a strap as well.  The crystal was cracked in a couple of places but otherwise it looked pretty good.  It didn't sound very good though - it rattled when shaken, so something was obviously loose inside. 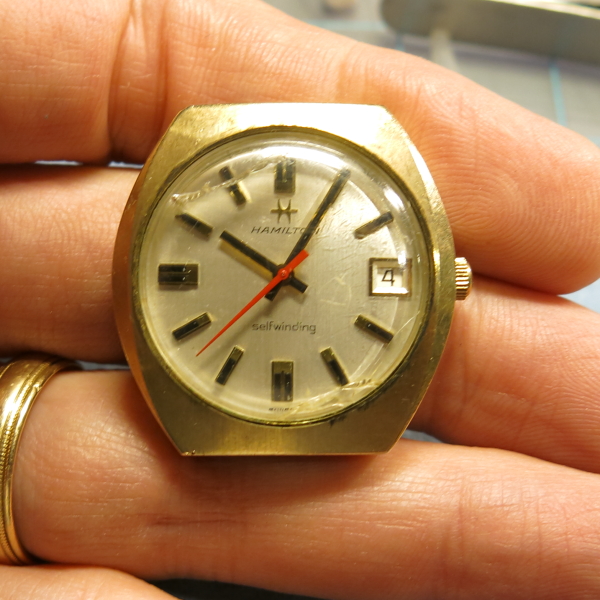 I didn't know what model it was until I flipped it over and saw the model number 941573.  The last two digits usually indicate the year of the model so that made it easier to find and identify. 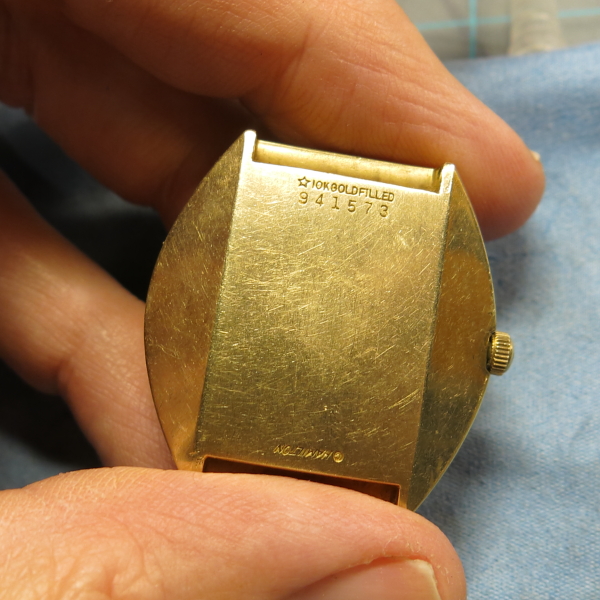 The case has a bezel that snaps onto the front. Under the bezel is a traditional one-piece design case.  I will need to remove the crystal in order to get the movement out.  It's easier to grab the crystal with the bezel out of the way. 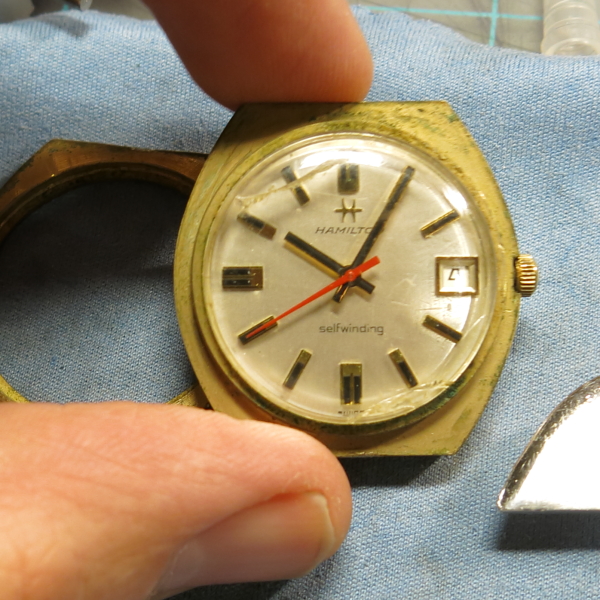 You can't really tell in the photo below that the hands and markers are yellow with a black stripe.  The red second hand really pops on this watch - doesn't it? 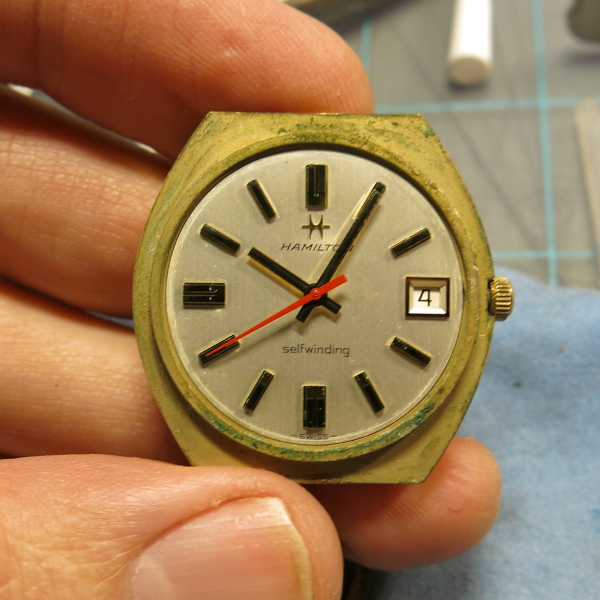 The rotor had come loose from the movement - which was why it was rattling.  The movement wasn't running either but I suspect that's because there's a loose screw inside somewhere.  This is an 822 movement. It's an ETA grade and similar to the 818 but the 822 has a date complication.  This is very similar to the movements that Hamilton uses today in a lot of it's models. 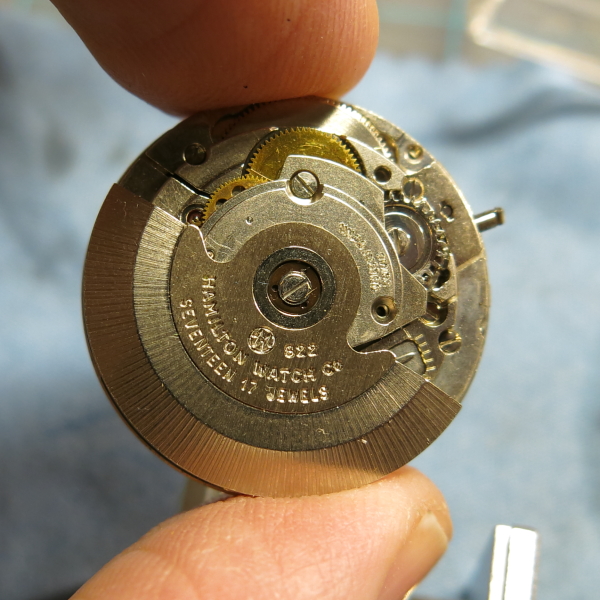 There are no watchmakers marks inside... I wonder if I'm the first person to open this case in 40+ years? 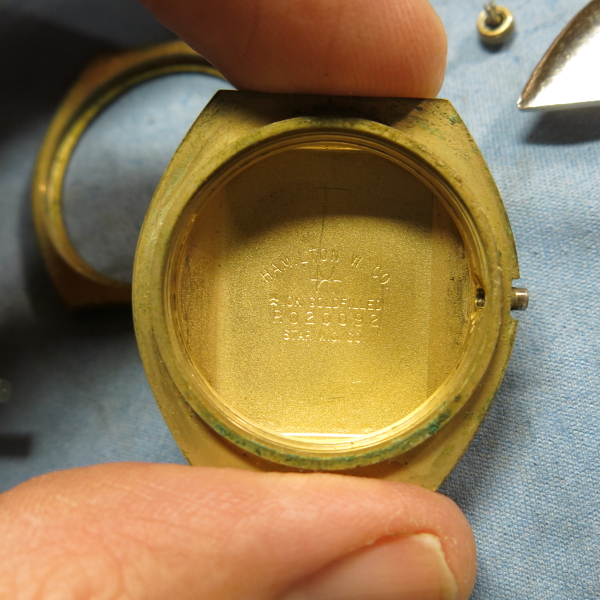 Little spring levers hold the dial feet on... I need to slide them out to free the dial for removal. 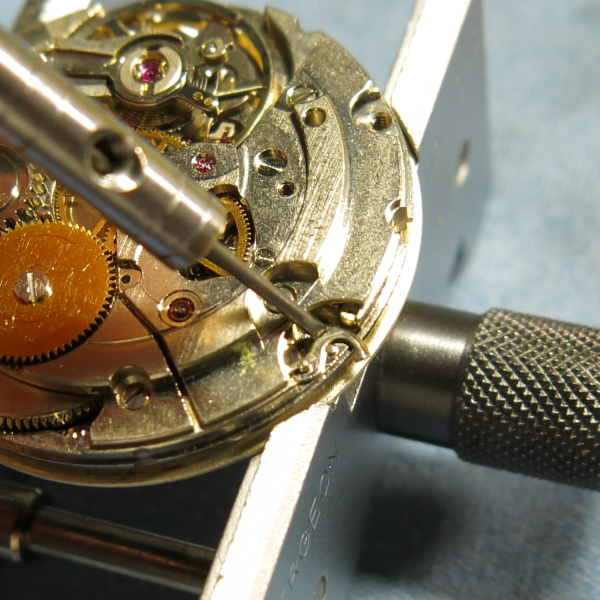 With the dial out of the way you can see all the bits that make the date complication work... well, you can see most of them, the covers that hold them in place block their view. 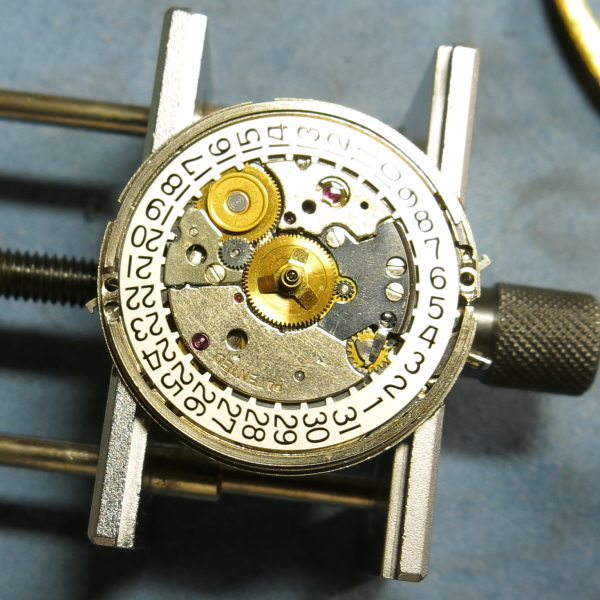 I removed the hour wheel and the set bridge on the right side and exposed the set wheel, minute wheel.   The funny looking wheel with triangular shaped add-on is the quick change wheel.  That's the wheel that advances the date as part of the "quick change" design.  Now I can pull the parts from the left side that advance the date wheel at midnight. 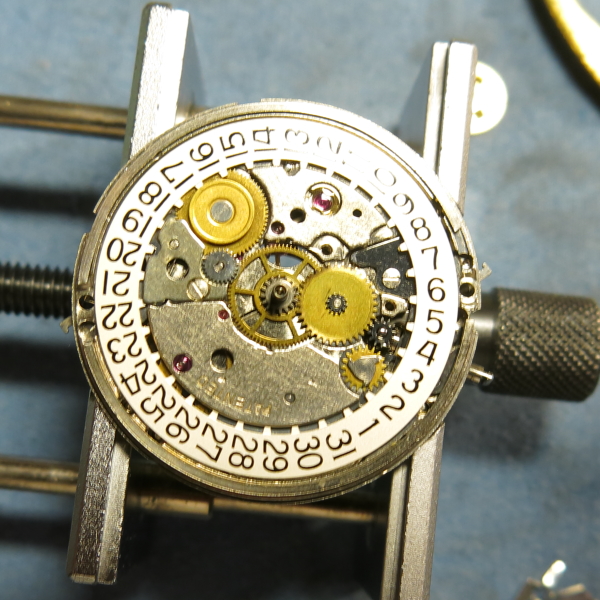 The most challenging parts of this movement are the little springs that are hidden here and there.  You have to be very careful not to lose them if the fly out of the movement. 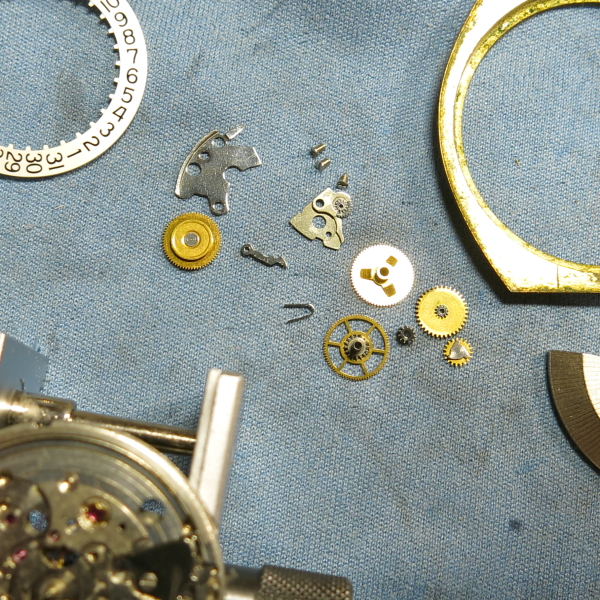 The only thing left to come off on the front is the balance jewel under the shock spring.  Then I can turn my attention to the other side. 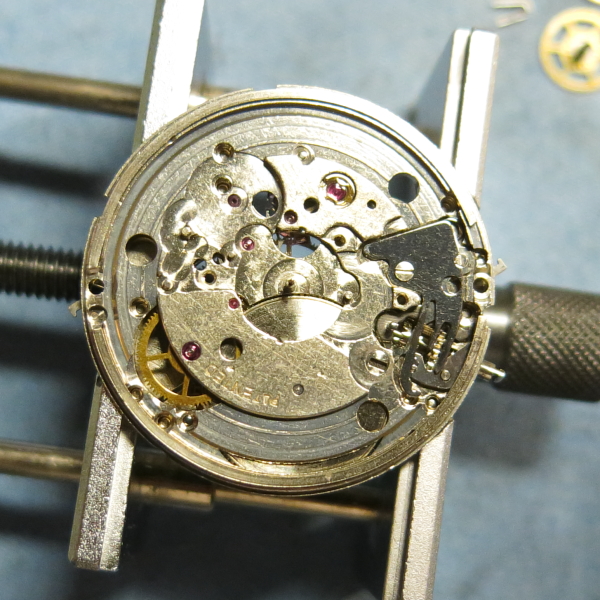 Without the rotor assembly in the way, this movement looks a lot like the other ETA automatics from the 1960s, like the 689, 694, etc.  The large winding wheel floats and is held against the golden ratchet wheel.  Notice the teeth are different sizes between the ratchet wheel and the winding wheel.  The ratchet wheel has finer teeth to engage the teeth on the wheel coming from the rotor assembly.  It's interesting how different teeth spacing can still mesh nicely. 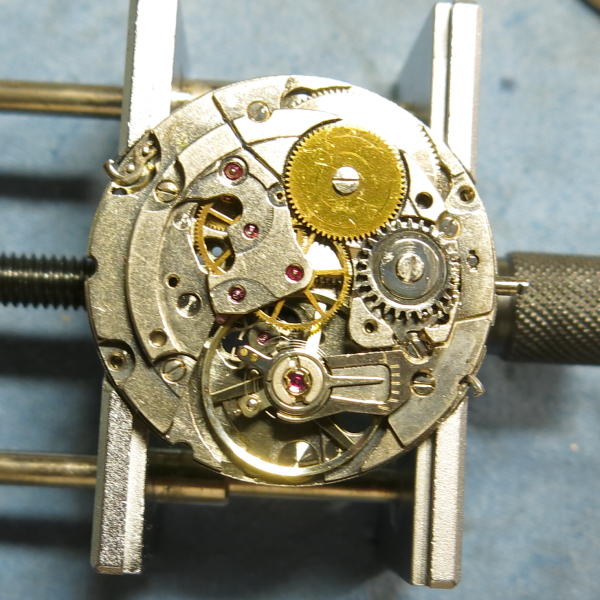 All the parts of the power train are removed.  Next off is the set of balance jewels in the balance cock and then the balance assembly itself. 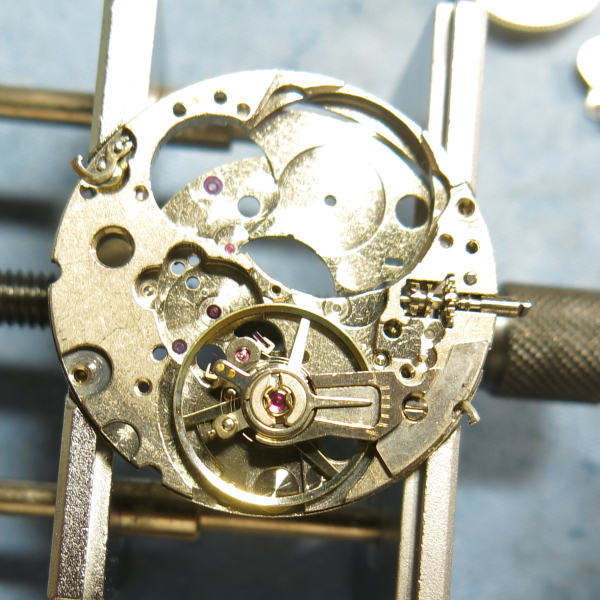 All that remains on the movement is the pallet fork, one screw holds it in place. 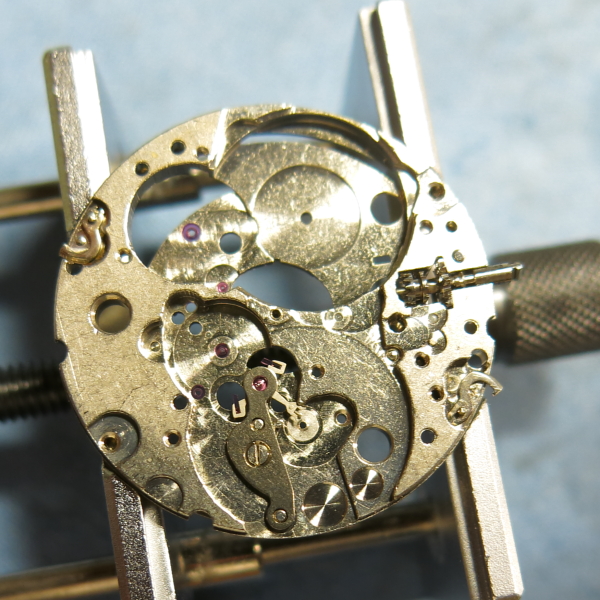 Everything is cleaned and dried.  I'll put it back together pretty much in the reverse order that I took it apart. 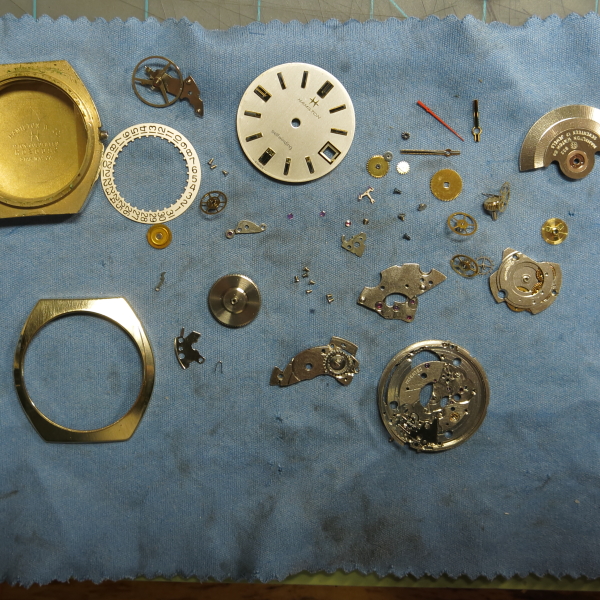 The first parts back on are the train wheels.  Getting all four wheels to line up can take some patience but they will eventually spin smoothly once the train bridge falls in place. 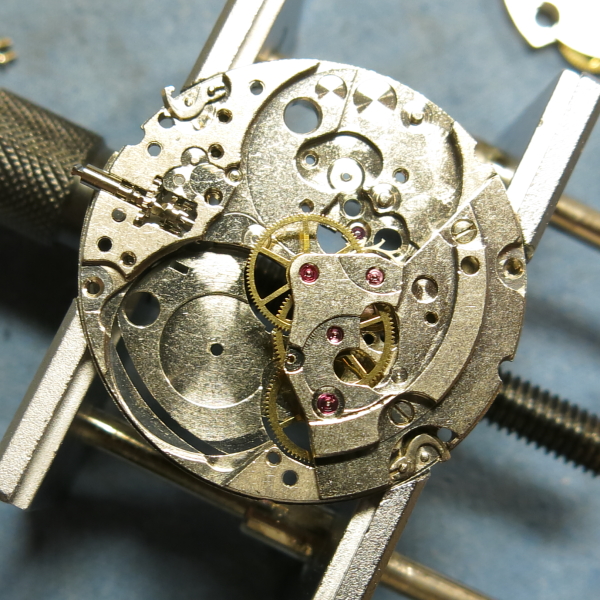 Next on is the pallet fork. 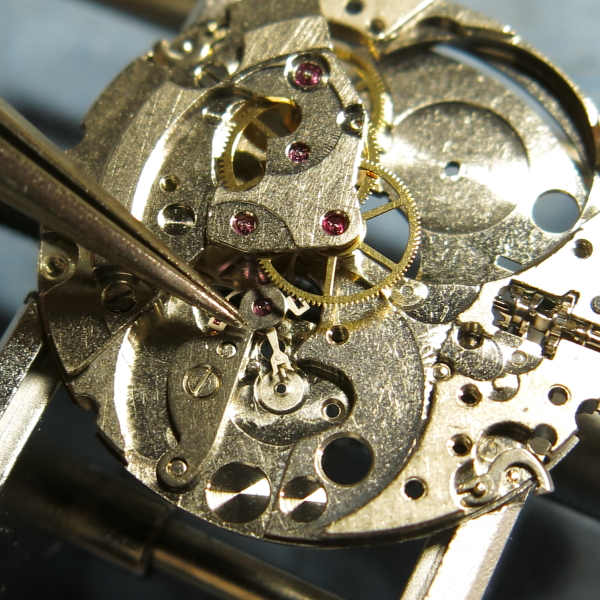 The mainspring barrel gets installed and the barrel bridge to secure it. 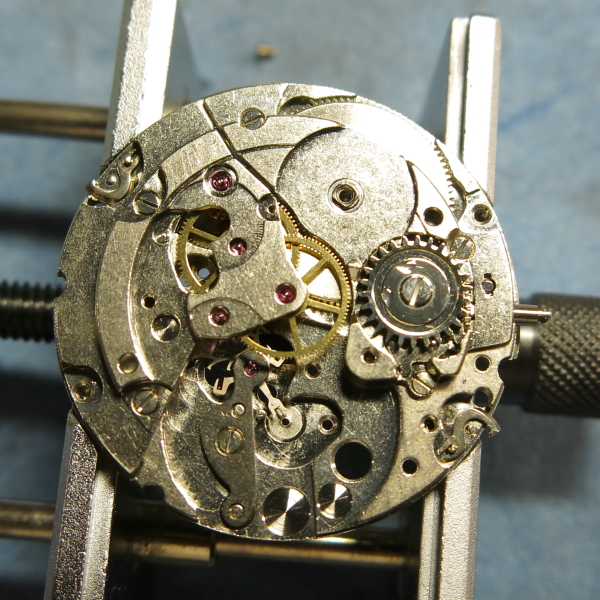 With the ratchet wheel reinstalled I can wind the watch a little and energize the power train.  That way the balance will start to move when it's reinstalled. 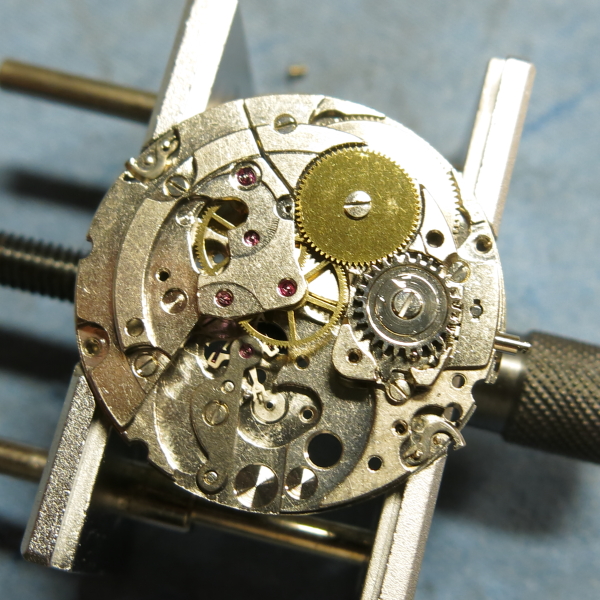 Before I put the balance back on I need to install the balance jewels and close the shock spring. 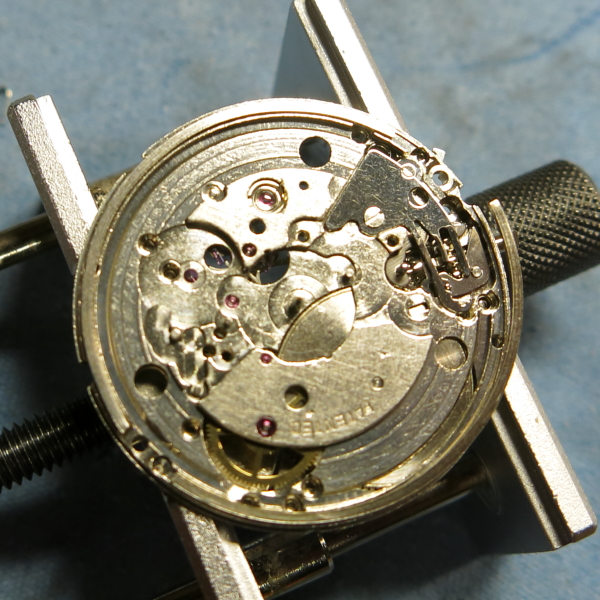 The balance is back in place and ticking.  Now I can reinstall the other balance jewels. 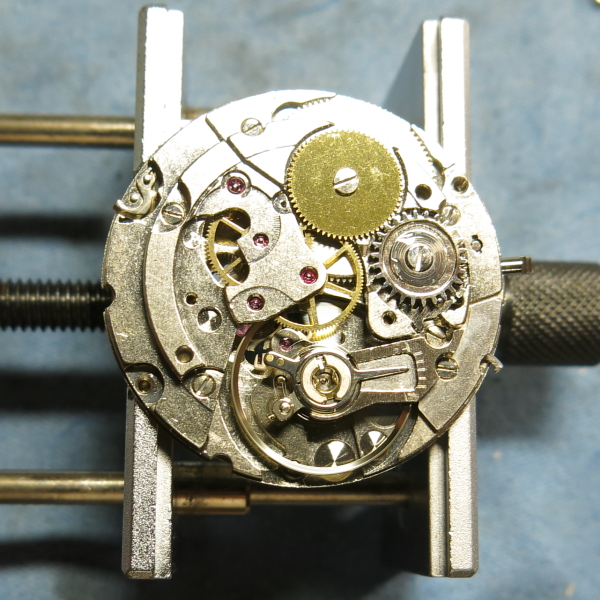 Alright, the balance appears to have good motion and is ticking very fast.  The 822 has a 21,600 beat per hour (BPH) beat rate so it's noticeably faster than most vintage watches with 18000 BPH rates. 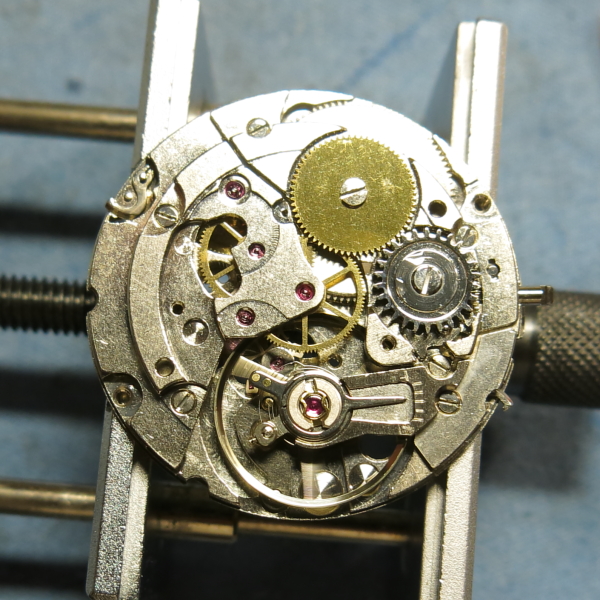 Well... something is making some noise inside.  I didn't see any dust or filaments when I reassembled everything but something is definitely interfering.  I'll just have to take it apart and reclean things until I fix it. 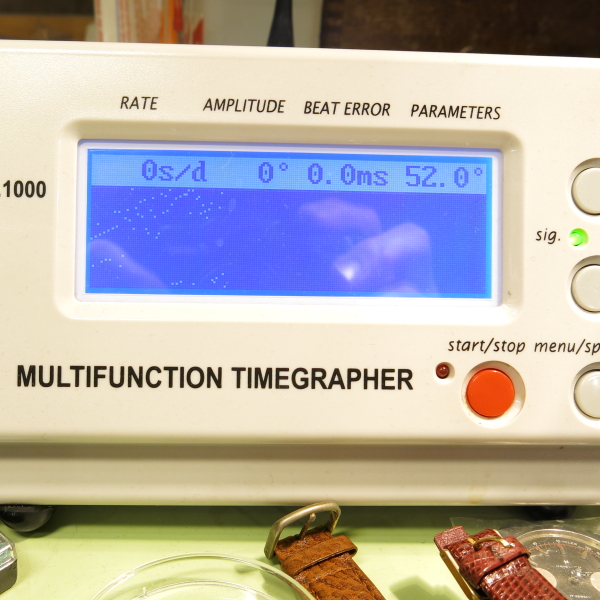 Ah... much better.  I'll leave it running a little fast for now. 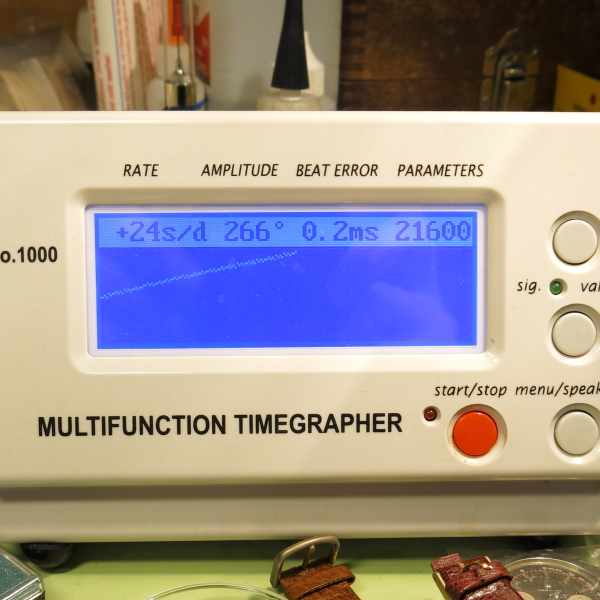 The rotor assembly goes back on, as does the dial.  Then I can put it the assembly back in the case. 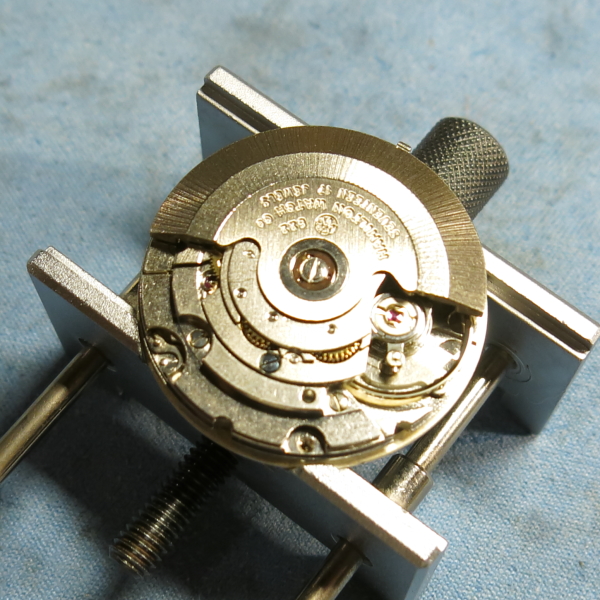 In order to put the hands on I need to advance the time until the date changes.  Then I know it's 12:00 midnight and I can position the hands accordingly. 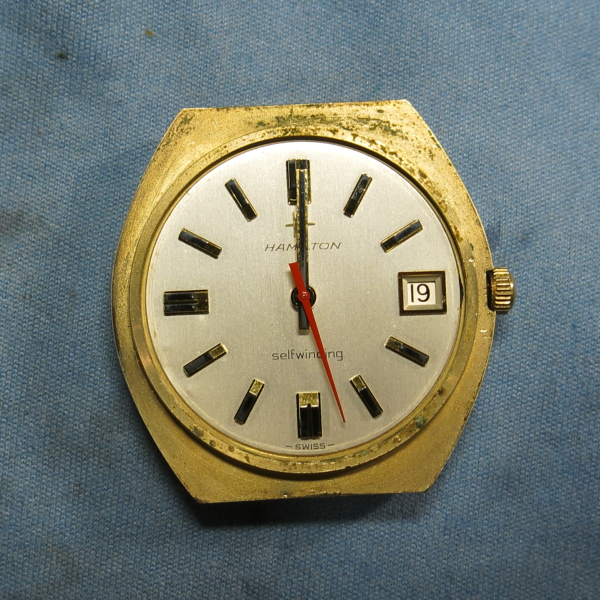 A new crystal is definitely called for. 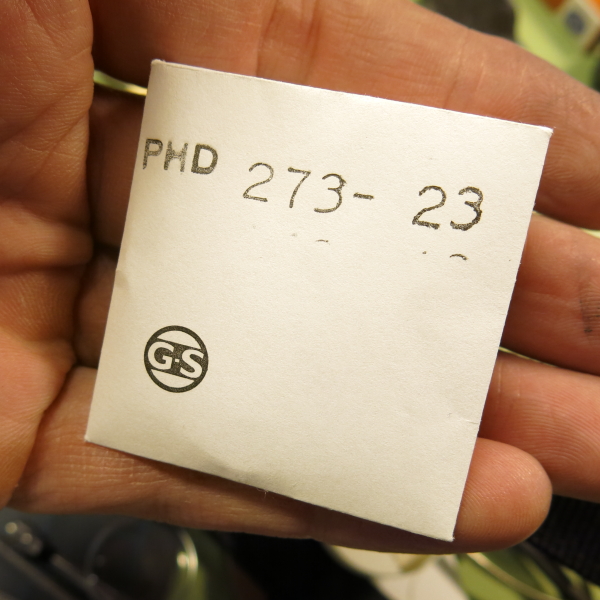 If you look at the catalog image you can see the bezel is supposed to have a brushed finish.  So I hit mine with a stainless steel brush to dress it up a bit.  The rest of the case is polished.  With the new crystal installed, this watch looks fantastic and it runs as nice as it looks. 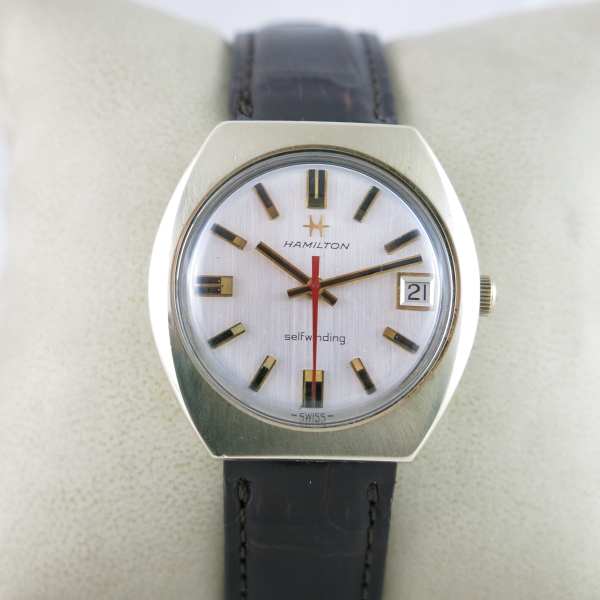