When I first started collecting Hamiltons about 10 years ago I focused mainly on pocket watches.  That's because my interest in Hamiltons was started after I got my grandfather's Railroad Special repaired, along with some other distant ancestors' dress pocket watches.

After acquiring a dozen or so pocket watches I eventually lost some steam, as I don't tend to use pocket watches very often, if at all.   However, I quickly realized that Hamilton also made wrist watches and then I was off to the races again.

One of the first models I happened upon was a 1962 Sea Rover II.  Before too long I realized it had a Swiss-made movement and I was under the impression that Swiss models weren't as desirable as US-made Hamiltons.  That was a classic rookie mistake and I sold the Sea Rover II.

If you want to avoid Hamiltons with Swiss-made movements you'll need to focus on models made before1954 and that exclude any models with automatic movements or movements with calendar complications.  Some folks actually do that - they prefer the earlier models.  But to avoid models with Swiss movements because you think they are "lesser quality" than US-made Hamiltons is really a misguided opinion.

Hamilton simply introduced models with Swiss-made movements in order to compete at lower price points with other makers in the watch market.  Like most things, you evolve or you perish.

That said, I've been on the lookout for another Sea Rover II because I didn't have a decent photo of my original example for the blog.  It's not a rare model but the Sea Rover II was a one-year-wonder and only produced in 1962.

The Sea Rover II came in a one-piece stainless steel case.  It was a "Fine" watch and priced to compete at around the $40 price point.  Of course, in 1962 that was the equivalent of about $325 today - so it was still not an inexpensive watch... but it was a Hamilton after all.

My project watch is far from new but it works, and the dial and hands still look great.  The crown is an obvious replacement and it's a bit too large, in my opinion. 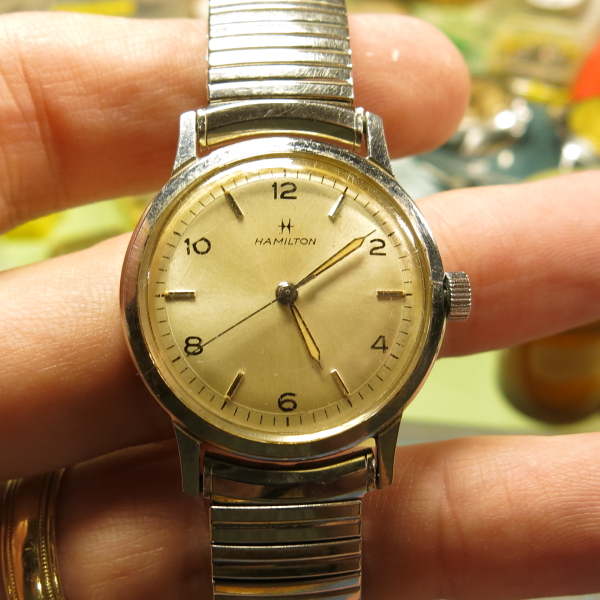 The one-piece case looks unremarkable on the back.  I don't see any of the usual marks from someone trying to open it from behind.  This watch opens through the crystal. 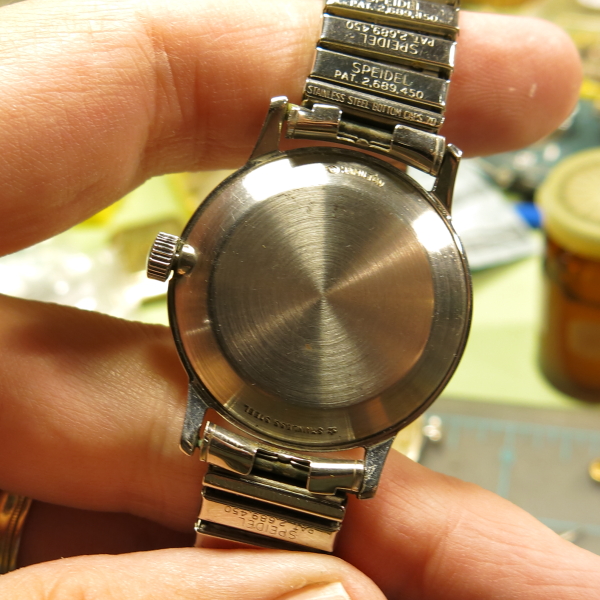 And speaking of opening through the crystal.  I recently picked up a new tool.  It's a crystal removing pump that injects air into the watch and pops the crystal off like the cork from a bottle of champagne. 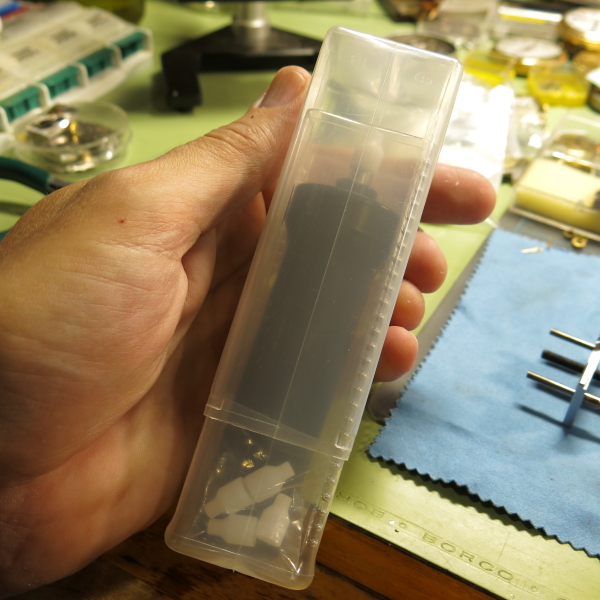 The tool includes a little lever to slip under the crown and pry the two-piece stem apart.  You need to be careful though not to pry it unevenly or you'll risk breaking the stem off in the crown. 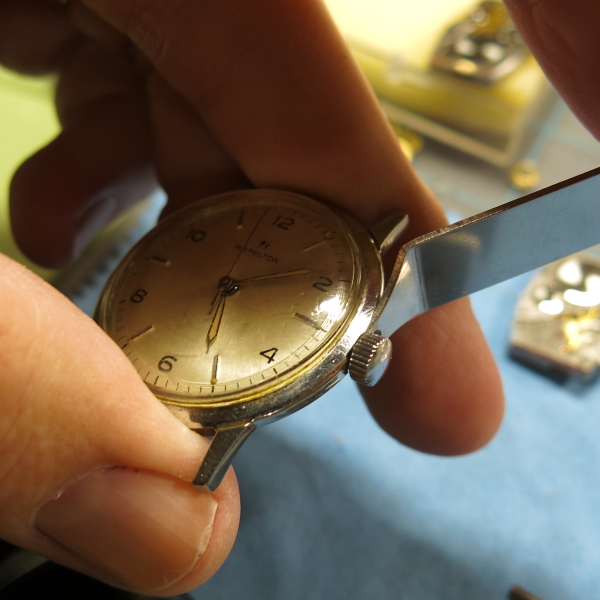 The handle has a metal tube that slides out and when you push the handle back in it blows air through the tube, through the white insert, and into the watch. 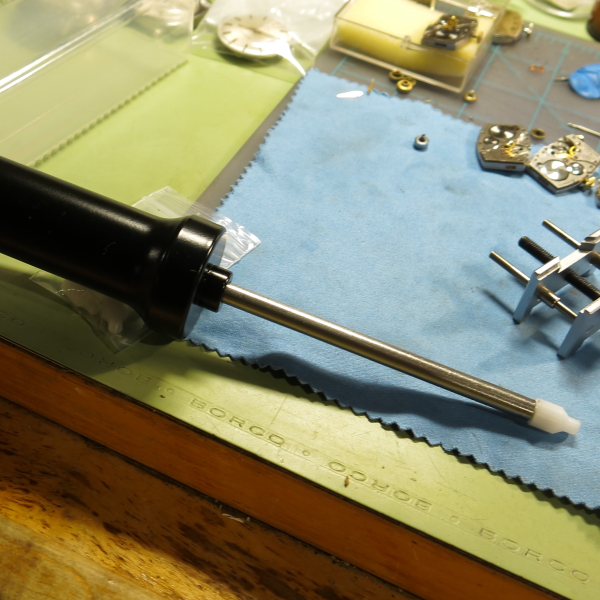 Like a bottle of "bubbly", you want to hold onto the crystal - otherwise it will fly off and hit you in the face. 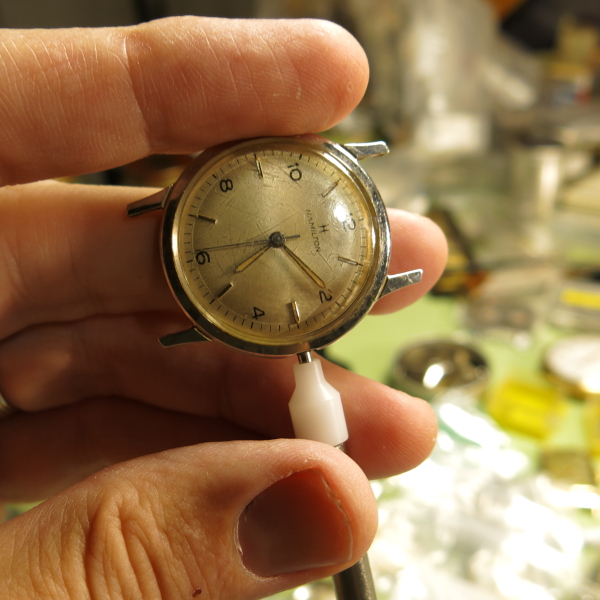 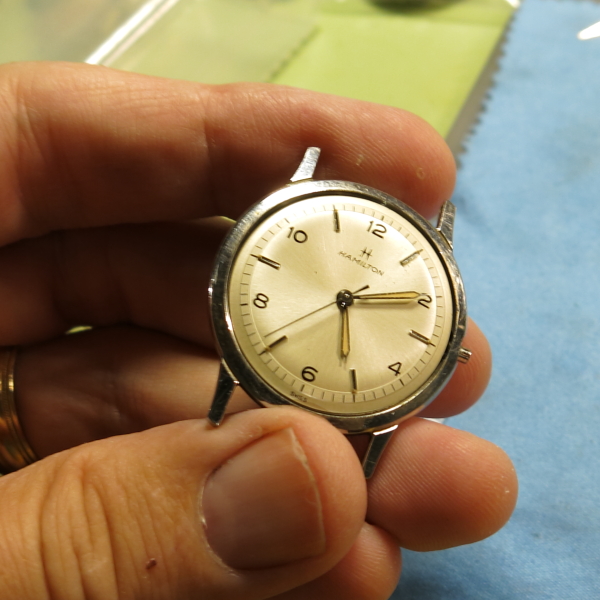 The Hamilton 688 movement is dirty and ready for a trip through the ultrasonic.  The stem is a bit rusty so I'll have to replace it if I want it to securely hold the male-hub of the stem after it's reassembled. 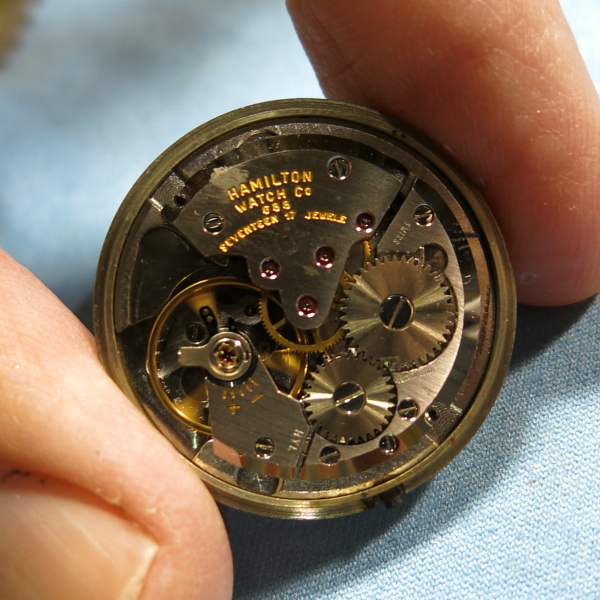 In this shot you can see the strength of the female side of the stem is a bit compromised by rust. 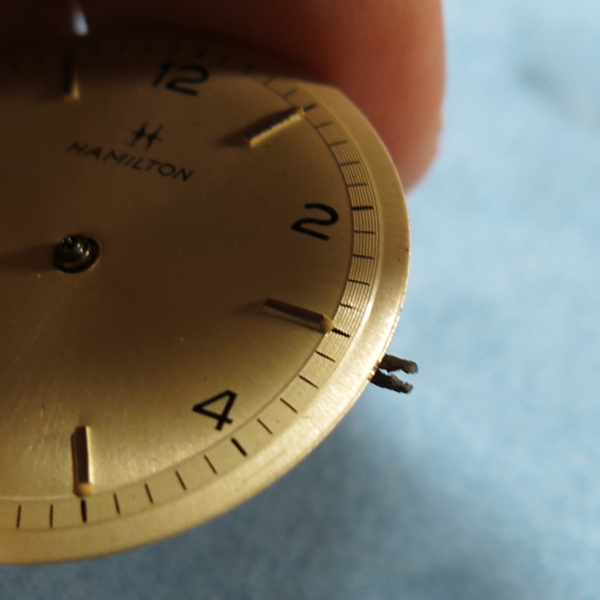 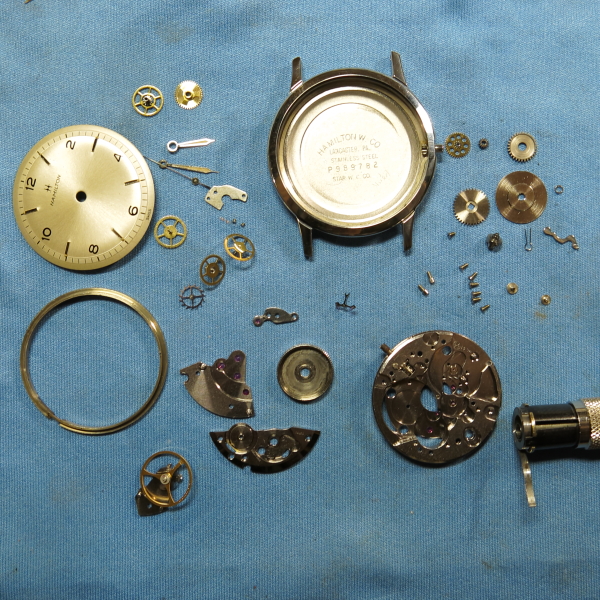 The balance is reinstalled and swinging with good motion. 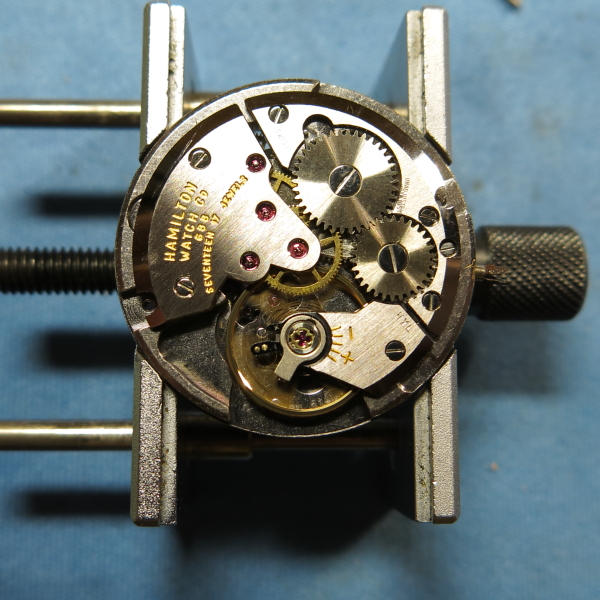 According to the timer the watch is running a bit slow but the other specs look good. 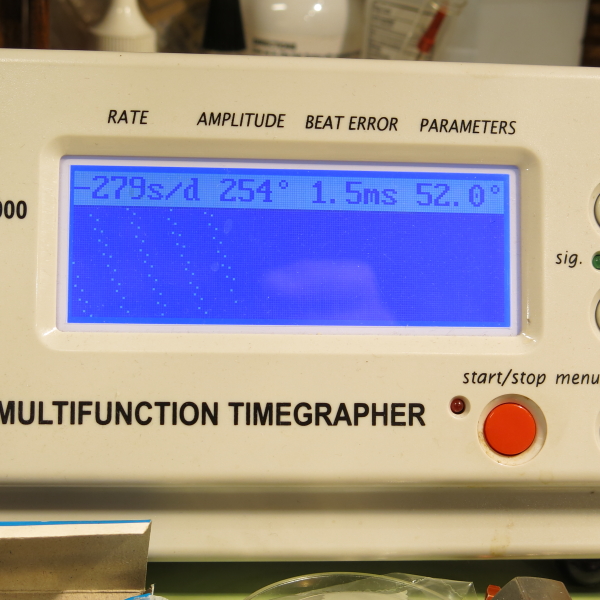 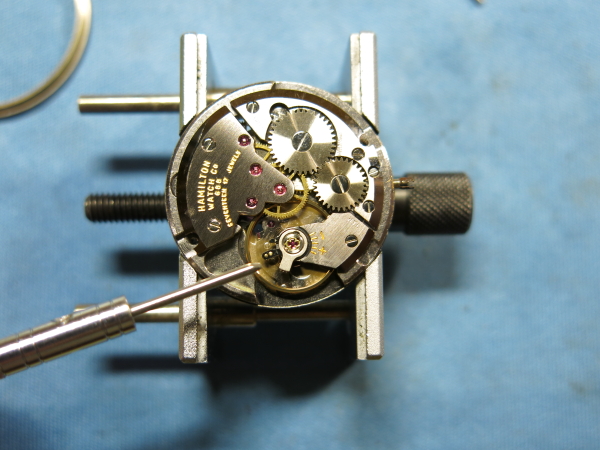 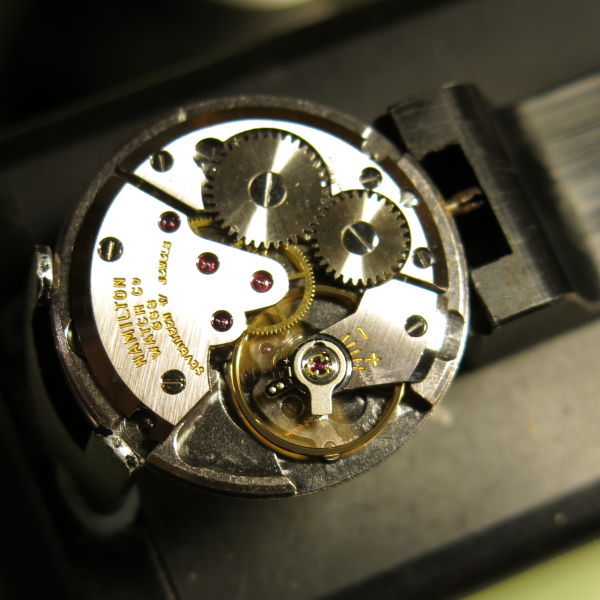 Not too shabby... now I can move the hairspring stud to lower the beat error as close to zero as I can get it.  Starting at 1.2ms, I won't have to move it too far. 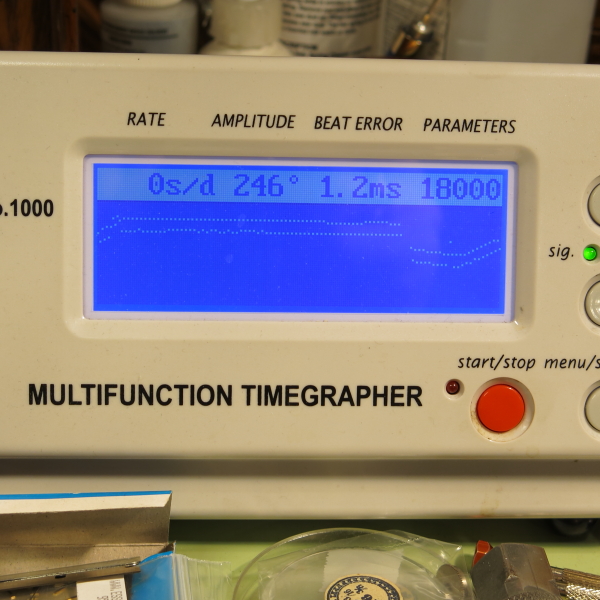 It doesn't take much of a tweak since the beat error isn't too bad to begin with.  However, it's so easy to do on this movement I would feel guilty if I didn't try. 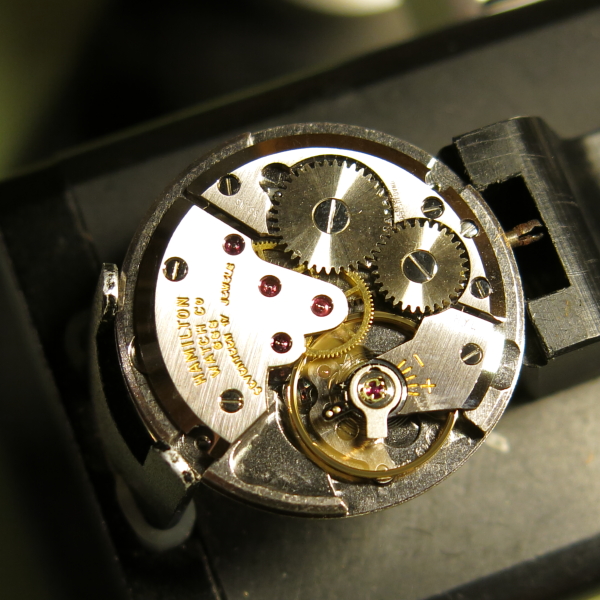 0.1ms is about as close to zero as I can get so I'll call it quits there.  You can see on the right side of the screen the two lines getting closer and farther apart as I moved the index this way or that. 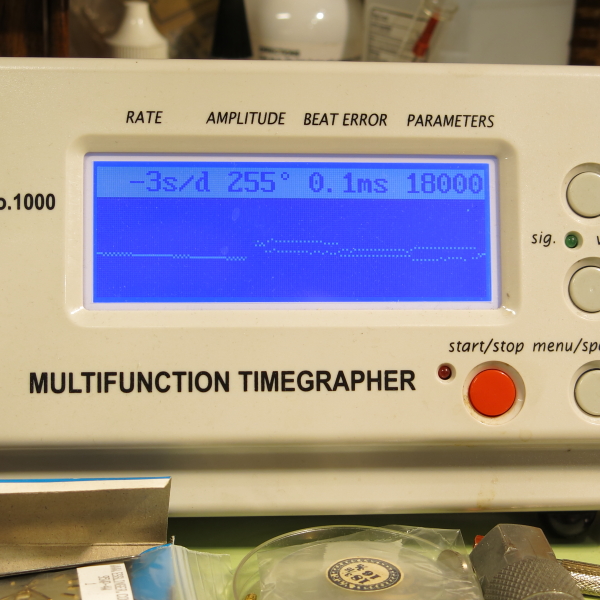 In this shot you can see the difference between a new stem and the rusty one.   A replacement is definitely an improvement. 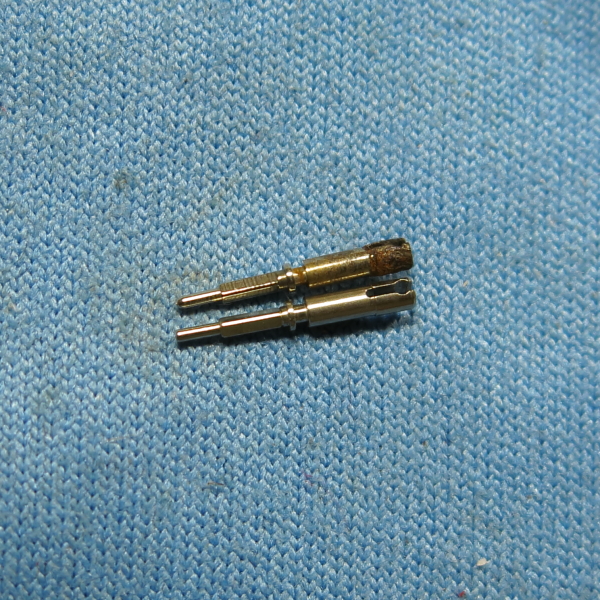 As for the crown... the one that was on the watch is a little over 5mm in diameter.  That doesn't sound "big" but it's obviously too large for this watch. 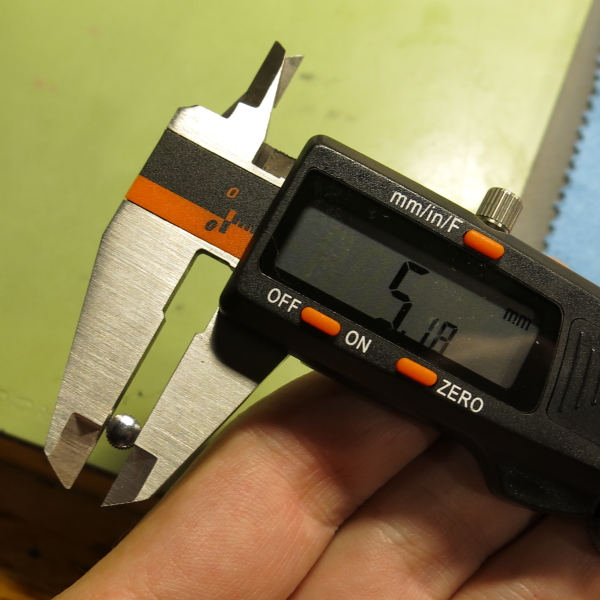 I happen to have a nice Hamilton crown that is better suited to the recess in the case. 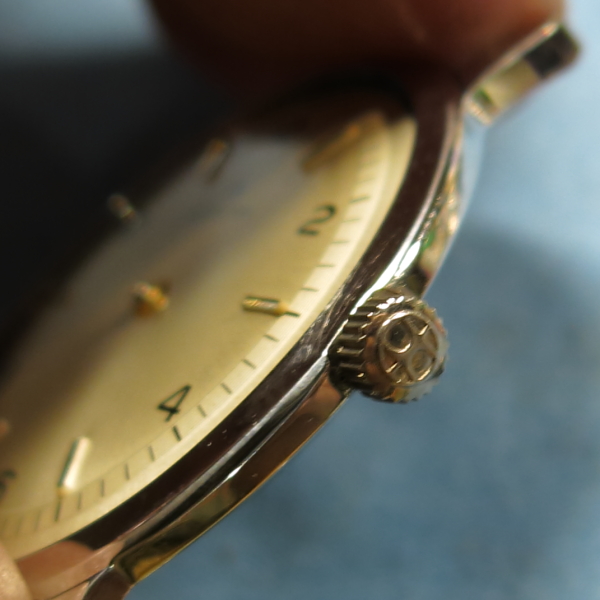 My replacement crown is just under 4mm.  That's about as small as I would use although some models use crowns as small as 3.5mm. 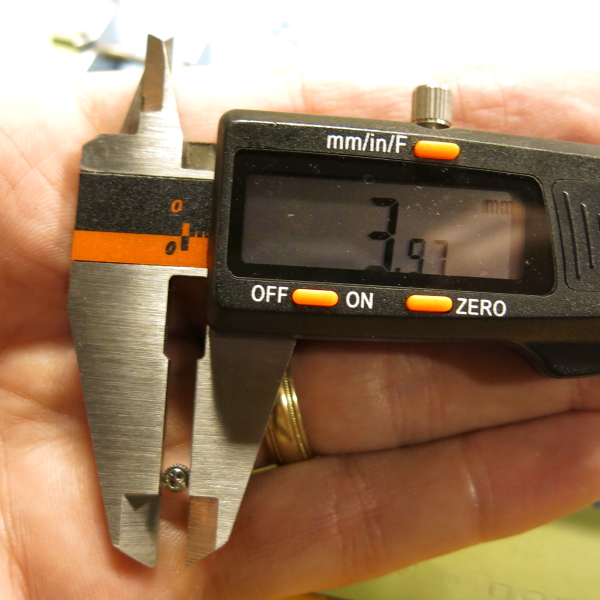 A new crystal is definitely in order and 29.3mm will do the trick. 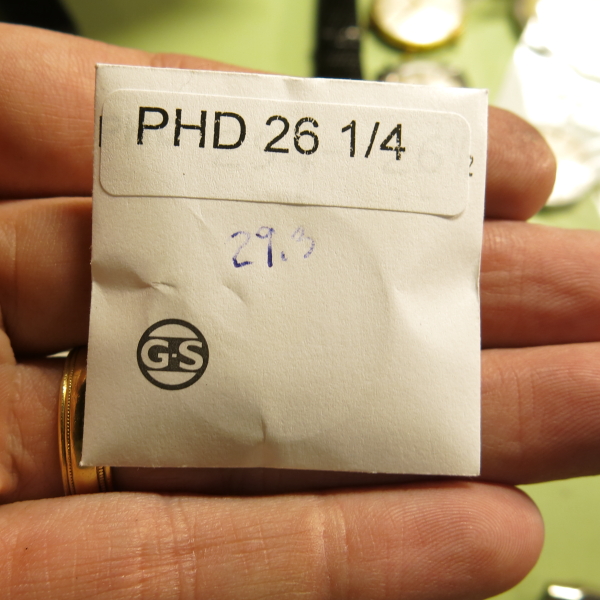 Although the bracelet that came with the watch isn't original, I thought it went well with the watch so I cleaned and polished it along with the case.  The finished project looks and runs great now. 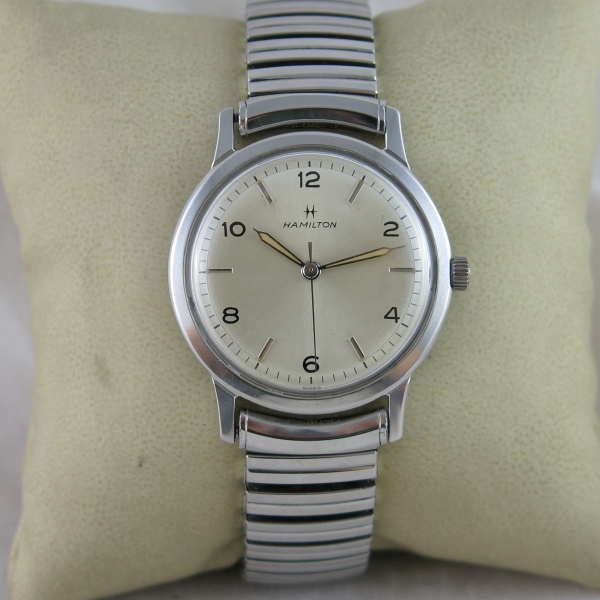