One of the nice things about a hobby like collecting Hamiltons is there are always opportunities to learn new things.  You can go broad or you can go deep.  Given enough time you can even do both.

For example, I recently came across a model that I was unaware of.  It's an Accumatic and it's got a calendar complication but it's not a Dateline model.  The Dateline models were introduced in 1963.  The model I came across is a one-year-wonder, the 1961 Accumatic A-575. 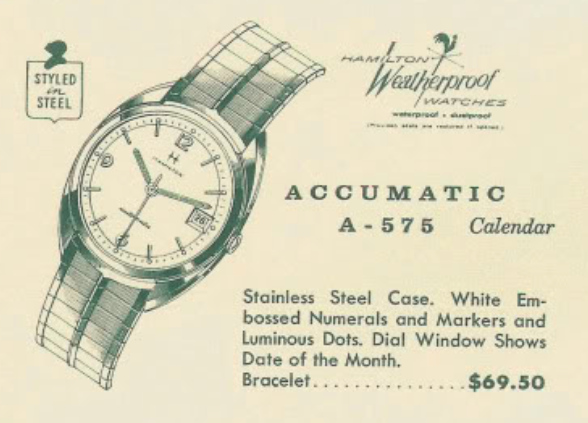 To my eye the A-575 was ahead of it's time.  I thought for sure it was going to be from the late 1960s so it came as a surprise to see it was from 1961.  The model comes in a two-piece stainless steel case.  Tucked inside is a movement I haven't come across before - a 17 jewel 692 automatic movement.

My project watch arrived in non-running condition but it looks good overall.  The dial is fairly complicated so I'm glad it's in good shape because it would be a challenge to get it refinished properly. 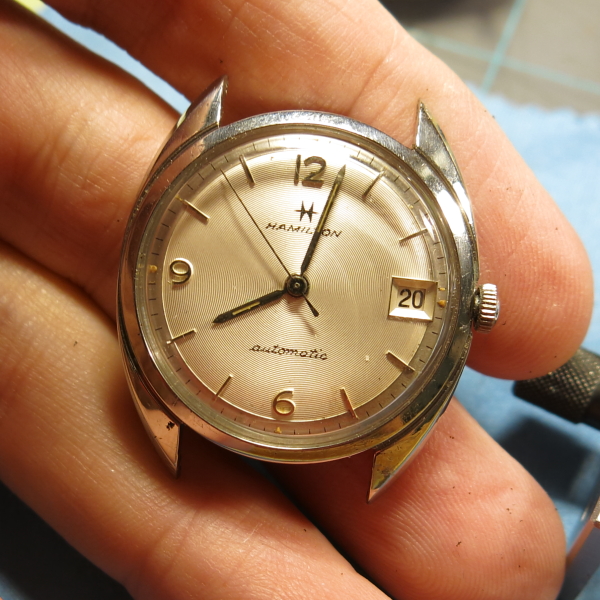 The back is a pie pan with a separate ring to secure it to the front.  This is my least favorite style of case back.  The ring can be a challenge to grasp, making it hard to open and close. 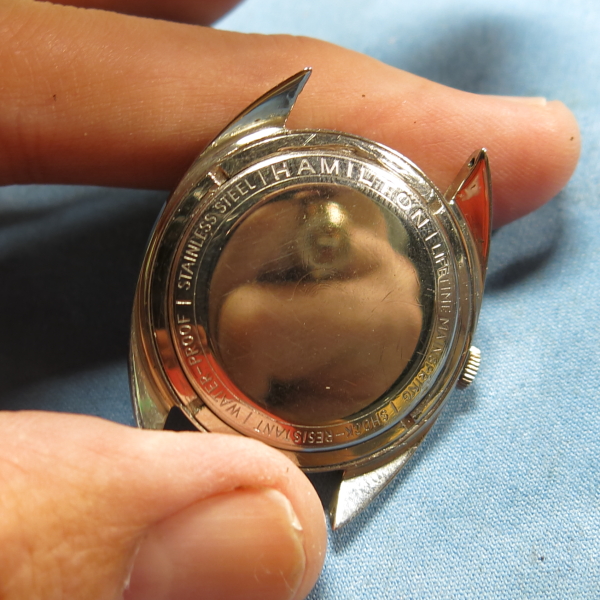 This case was made in Germany and it's reminiscent of several other early 1960 models like the Sea Scout. 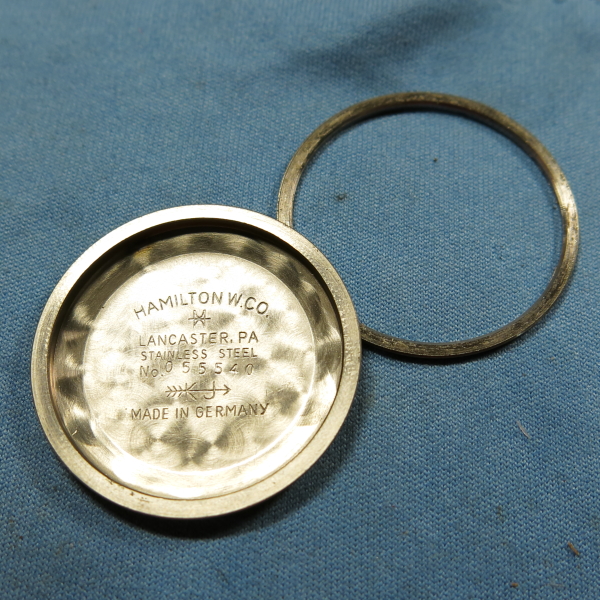 The 692 is obviously an ETA movement.  From the back it looks just like a 679, 689, or any of the other Accumatic movements. 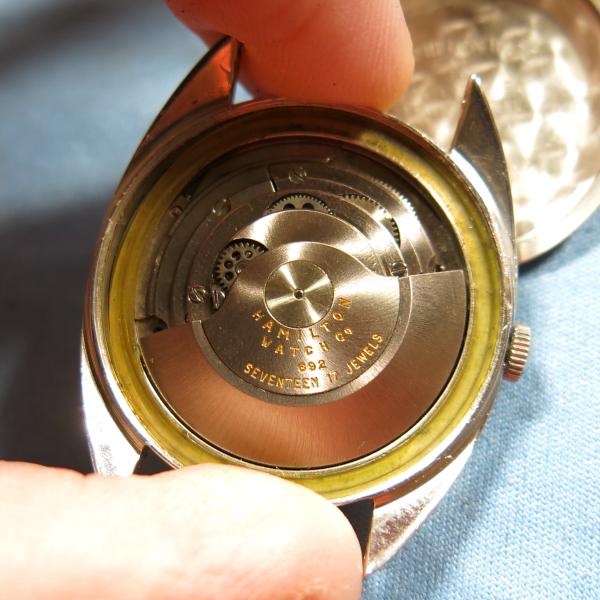 Check out the dial... it has a silver colored band around the perimeter with a textured center.  The hands are luminous and there are little dots at the hour positions, but some have been lost to time. 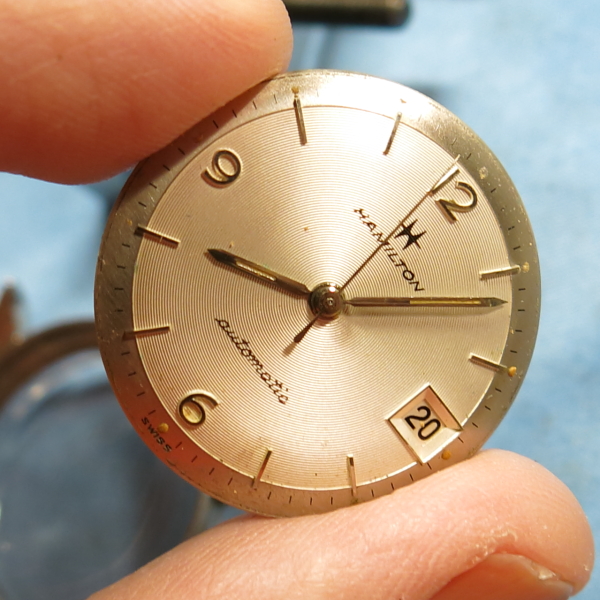 Well, as you can see by the calendar complication, the 692 is not the same as the 694 used in the Dateline models.  The date wheel advances slowly until the spring-loaded index lever positions the new number in the dial window.  The 694 has a spring-loaded mechanism that quickly snaps the date wheel one position when the date changes. 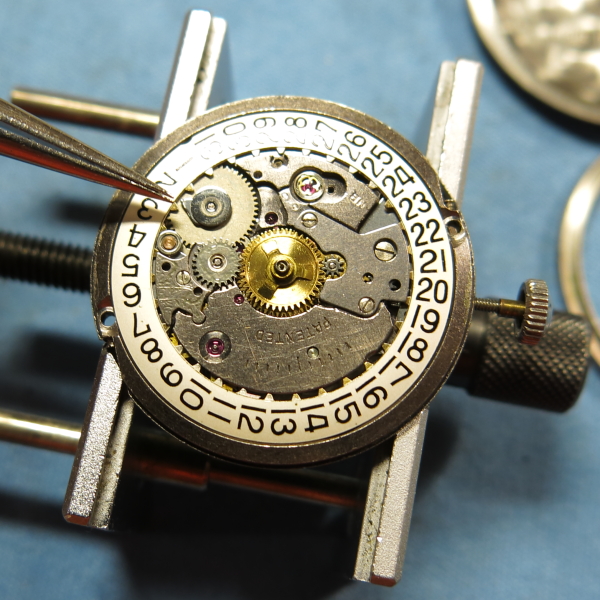 The index lever on this movement is larger than on the 694 and it has a guide wheel to position the wheel between the teeth.  The U-shaped spring is a little heavier than the 694... so I need to take extra care not to accidentally lose it. 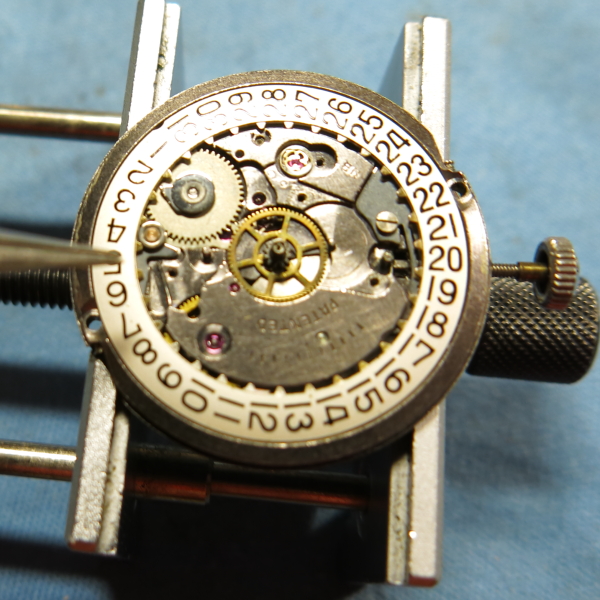 With the date wheel out of the way you can see just how much more substantial the index lever is on this grade.  It's definitely more complicated than the 694 that replaced it. 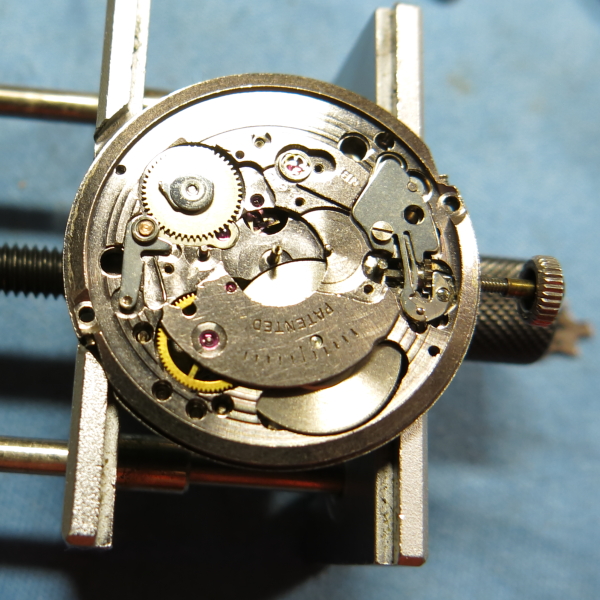 The front of the main plate has been stripped of parts.  Now to flip it over and work on the back. 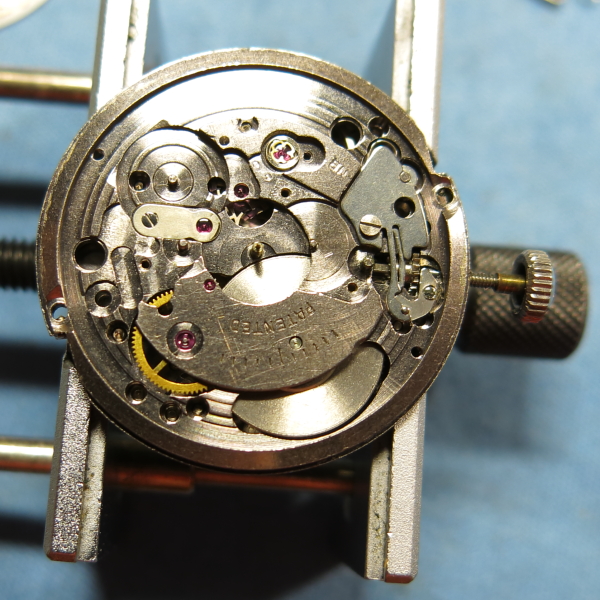 Without the oscillating weight blocking the view, the movement looks just like any other ETA automatic. 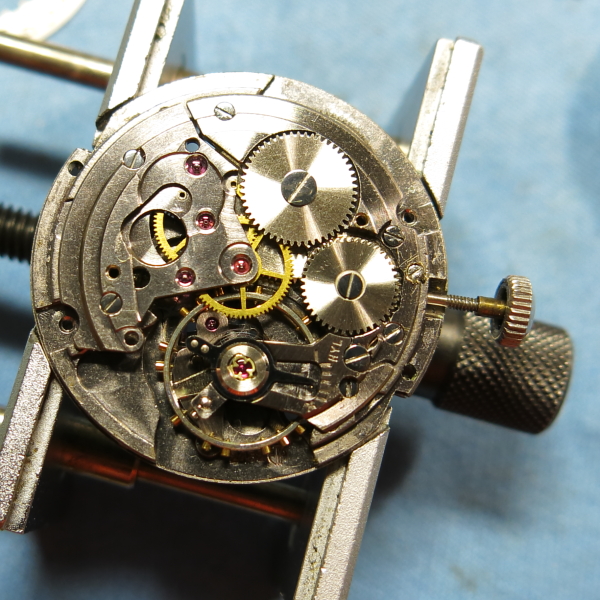 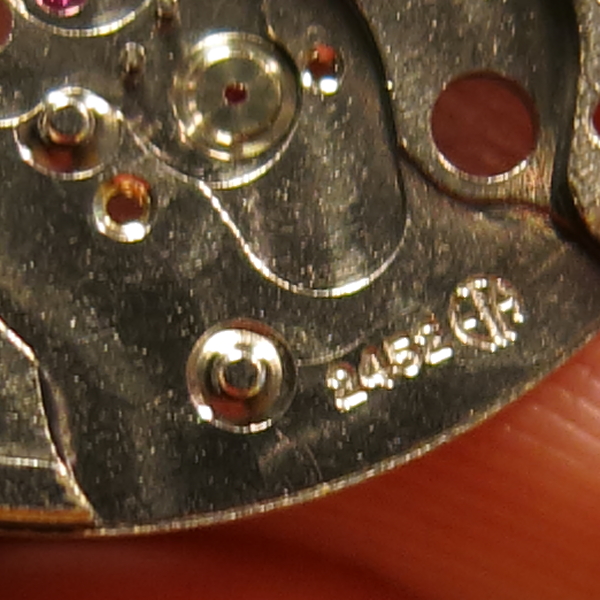 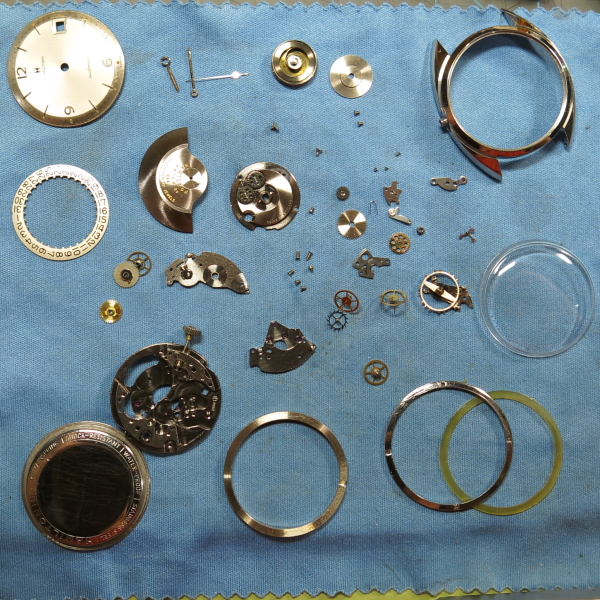 Well, here's the reason the watch was not running.  The 4th wheel is out of flat.  I could probably straighten it but it's easier to replace it with a better example from another ETA movement that uses the same wheel. 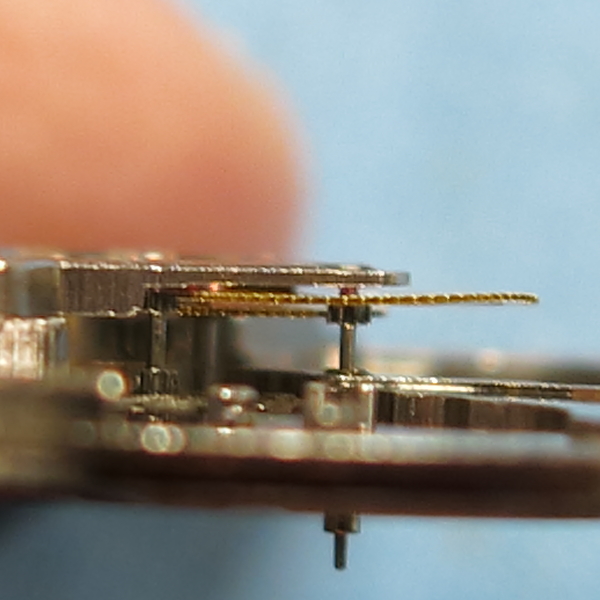 When the train wheels are reassembled they should spin freely.  If they are sluggish at this point, the watch will not run properly once it's assembled. 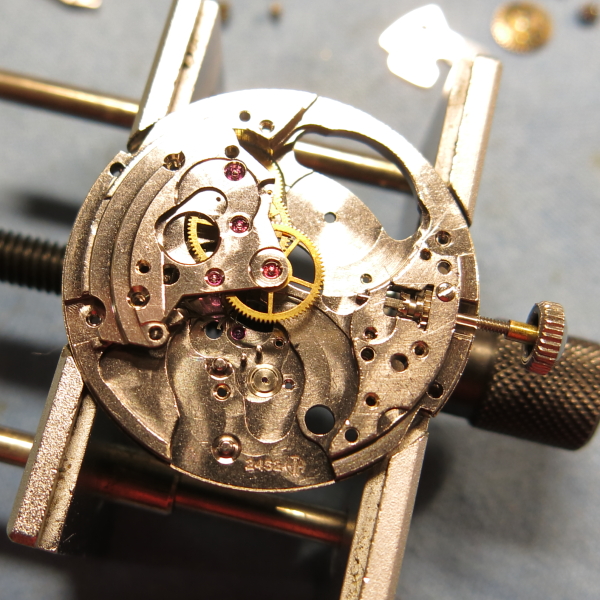 The movement is now back to running condition.  Let's see how well it's ticking. 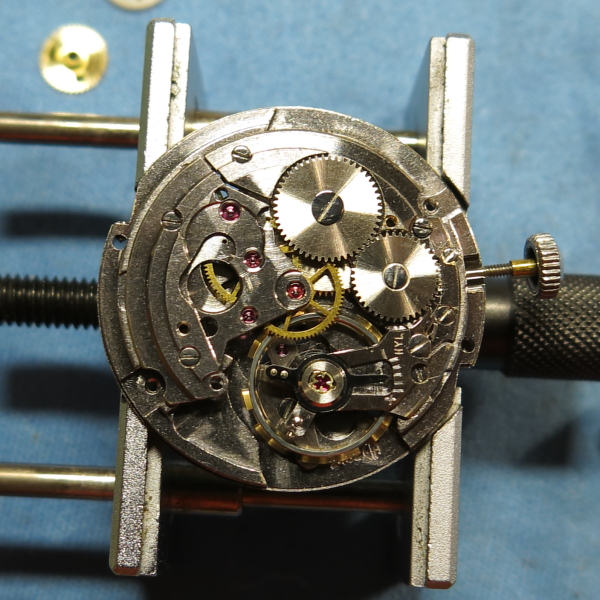 Not too shabby.  The beat error of 1.8ms is well within my specs (l like to be under 3.0ms).   Since this movement has a fixed hairspring stud it's not as easy to adjust as iwith later ETA grades.  Reducing it would require removing the balance from the balance cock and risking goofing up an otherwise perfect hairspring. 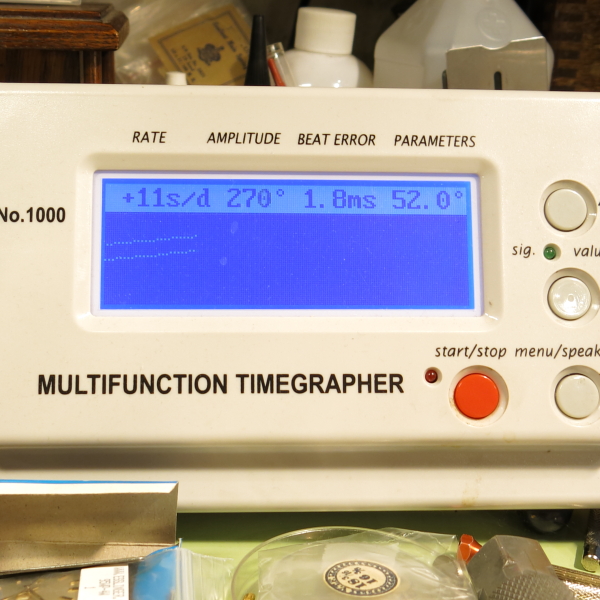 It took about 20 minutes and all of the language I learned in the Navy to get the spring and index lever positioned with the date wheel.  I performed the task in my camera light tent - just in case any of the parts decided to spring out, which they did.  It's all back together now and once I add the hour wheel I can advance the time and test that the date wheel advances. 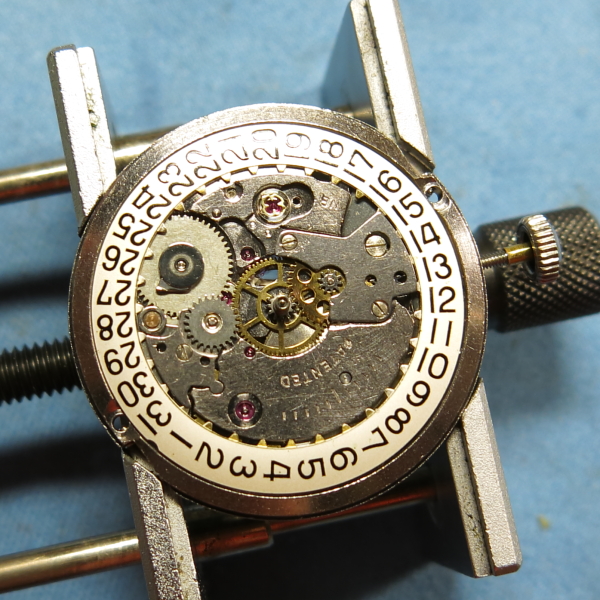 The 28.5mm crystal that came on the watch was in good shape but it was a little loose in the bezel.  A slightly larger 28.9mm will be a better fit. 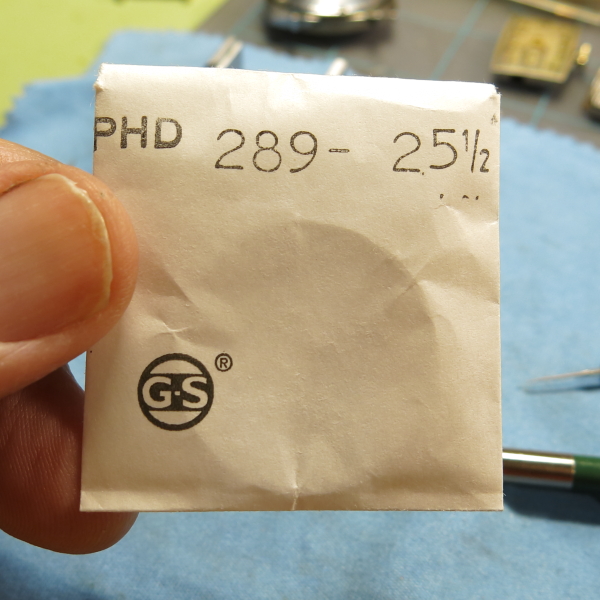 This unique watch turned out great!  I'm really surprised that the model was only available for a single year.  I suspect that either the long range plans for the Dateline series scuttled it or the advances in ETA technology did.  Probably not the latter though, as I suspect a 694 could have been dropped in its place without any significant changes required.  Other models from the early 1960s had different movements over time... like the 679 evolved to the 689, for example. 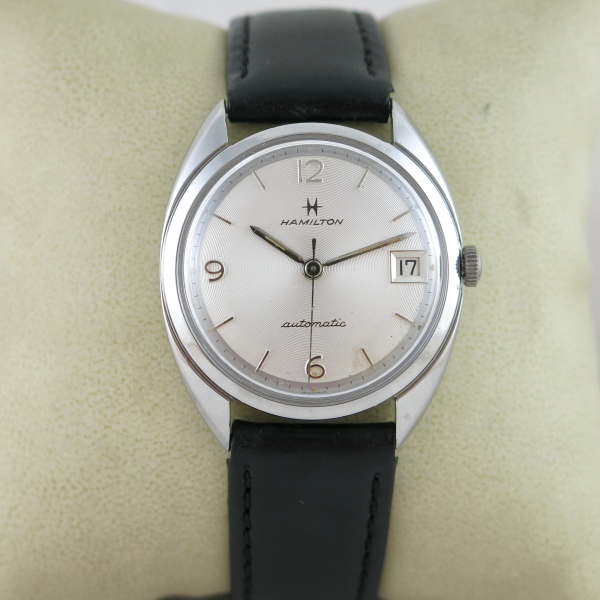