For the most part, Hamilton designers used white, silver, or black for dials and on a few occasions gold and sometimes rose-colored dials were used.  Of course there are exceptions to every rule but if you find a Hamilton model - especially from before 1960 - with a boldly colored dial, then buyer beware.

All bets were off in the 1970's though.  All sorts of colors were introduced and even the 1960's had models with very unique dials.

Take for example, the 1974 Accumatic A-515.  It was produced though 1974 and featured a bright orange dial.  The catalog image just doesn't do the real watch any justice. 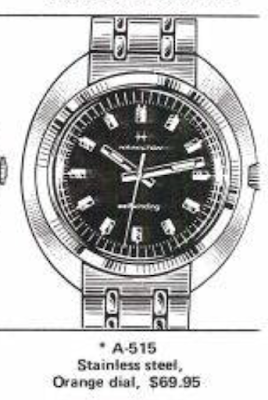 I think the Accumatic A-515 is an interesting blend of old and new, at least as for as the 1970's concerns.  To look at the watch, it looks like the typical funky, chunky 1970's styling but it has a 1960's movement under the hood.

My project watch arrived with a noticeable clunk coming from the inside.  I thought for sure the oscillating weight must have come off.   I was unable to open it though, as the screw on back was on TIGHT. 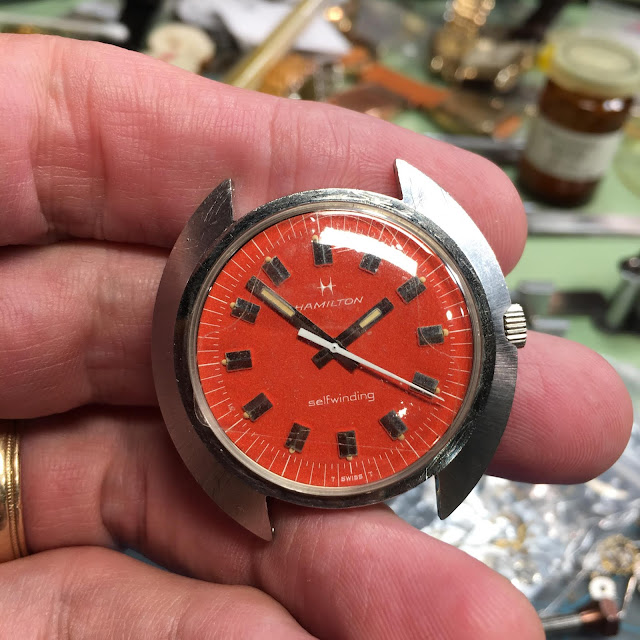 Looking at the case back reveals it to appear like the usual 1970's models.  However, there is one interesting detail to be seen - the model number for this watch is 689032-3.  The -3 means it has a stainless steel case.  The 689 is an indicator of the movement inside.  You will usually see this type of watch start with an 8, for an 825 or 818, etc. movement. 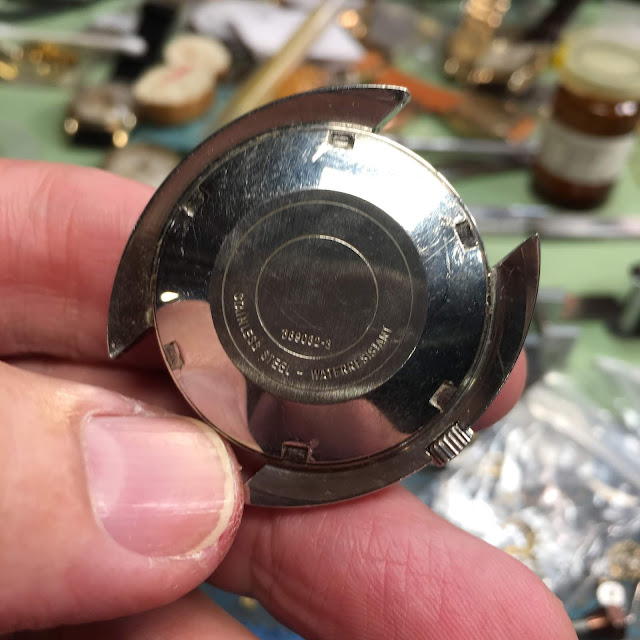 I had to purchase a new case wrench in order to open the watch.  It's a high quality wrench and costs 10 to 15x the price of a "cheap" wrench.  In this case (pun intended) it was worth it, as I was able to get inside.

You can see below that the movement is a 17 jewel 689A, also known as a caliber 63 - although the 63 has 4 additional jewels in the automatic framework, bringing the total to 21.  You can't really tell in the photo, but the rotor has come slightly unscrewed from the framework and is wobbling.  That was the cause of the clunking noise and will be an easy fix (tighten the screw). 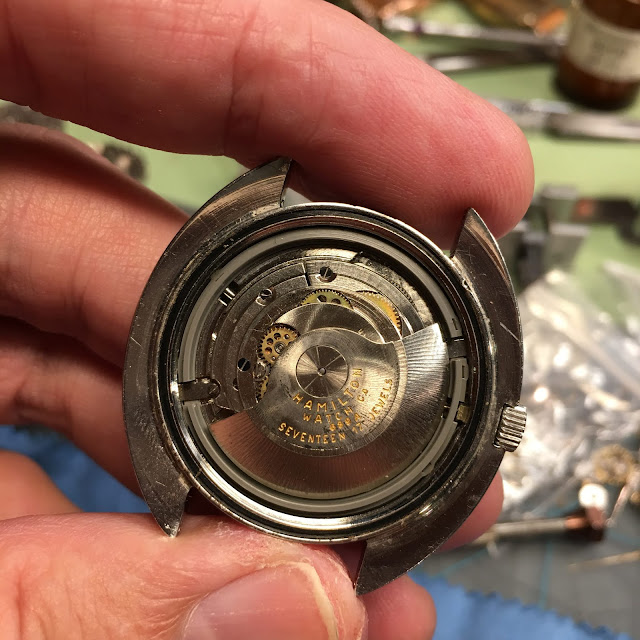 While the parts are in the cleaner I will try to polish and dress the case.  This case has a brushed finish on some surfaces and a bright finish on others.  First I'll try to de-scratch the brushed finish and then tape it off so I can polish the bright surfaces. 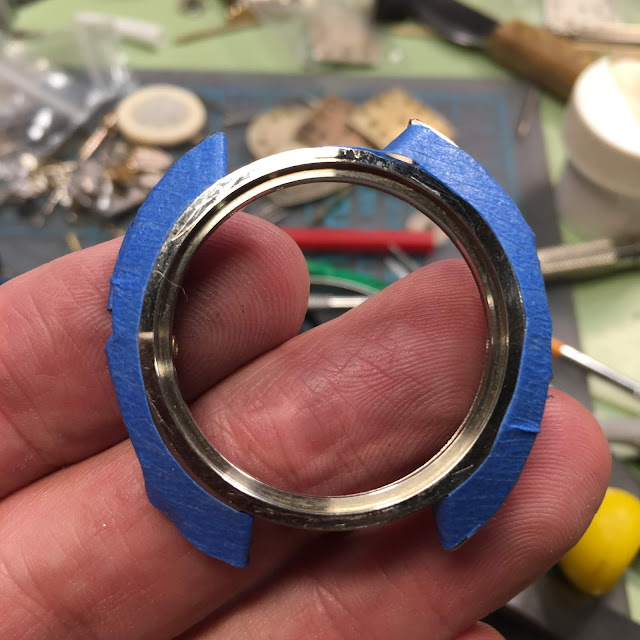 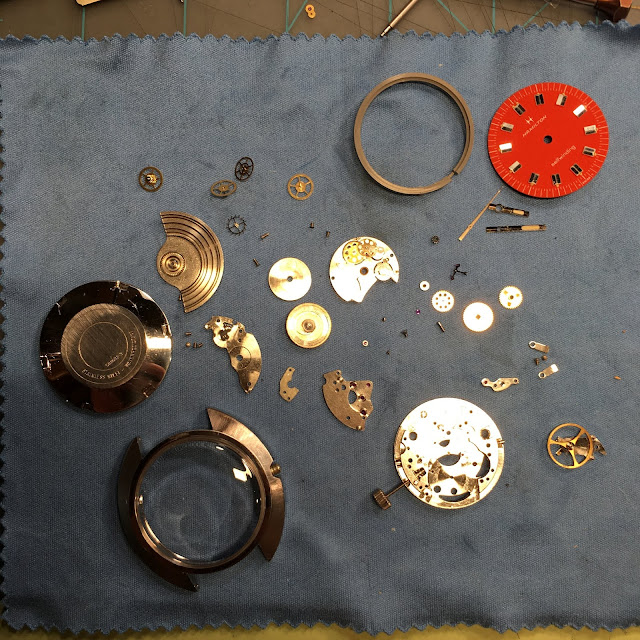 The basic movement is back to running order.  It has good motion so I suspect the timer will bring good news. 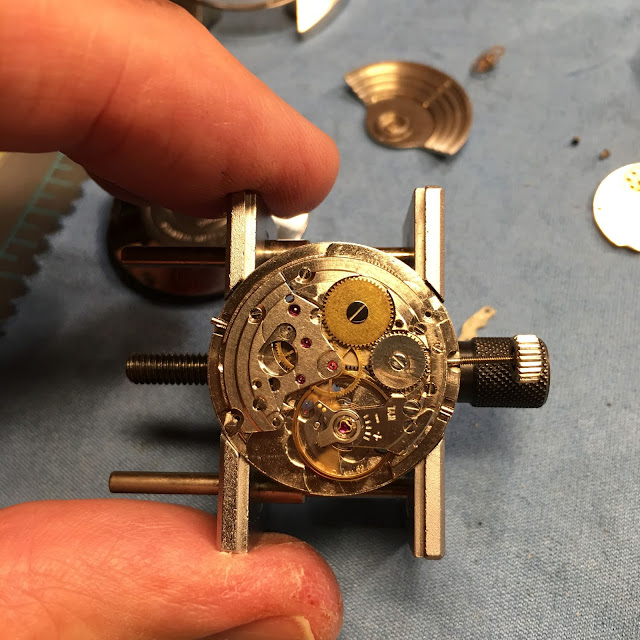 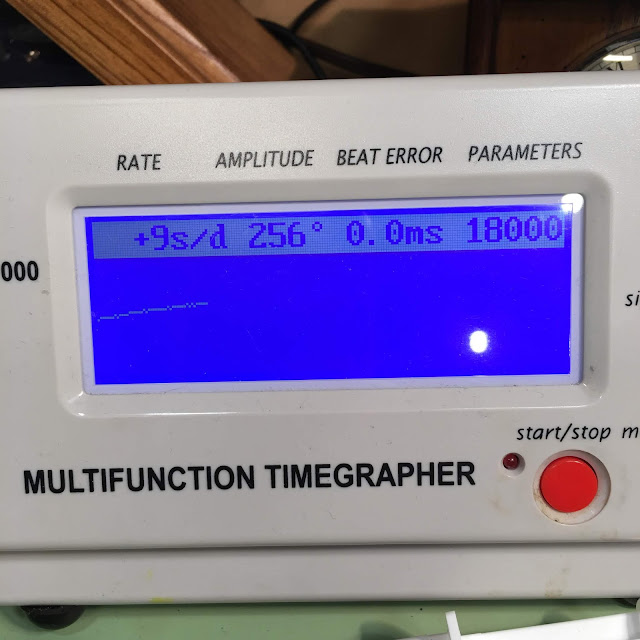 Other than a couple of tiny pieces of lint on the crystal, I'd say this watch turned out very well.  I'm sure an orange dial isn't for everyone but I'm sure there are plenty of Clemson or Virginia Tech fans that might like to have one. 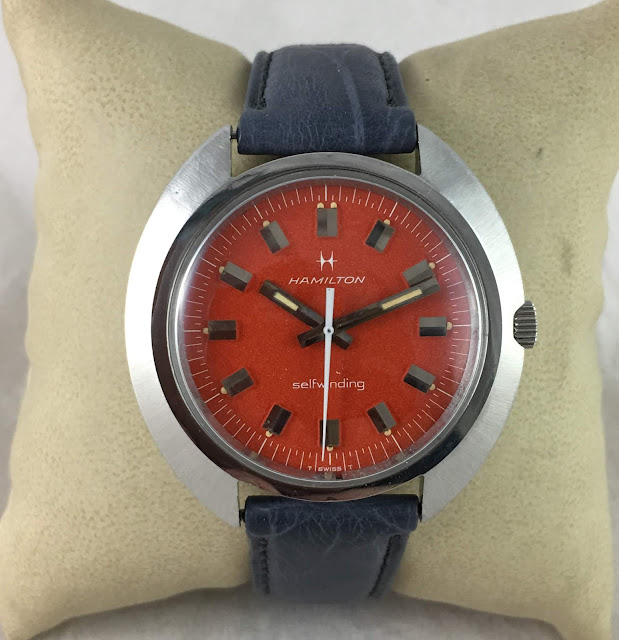 My light tent is merciless when it comes to photos, so here's a wrist shot with the watch in more flattering light.  Definitely makes a bold statement. 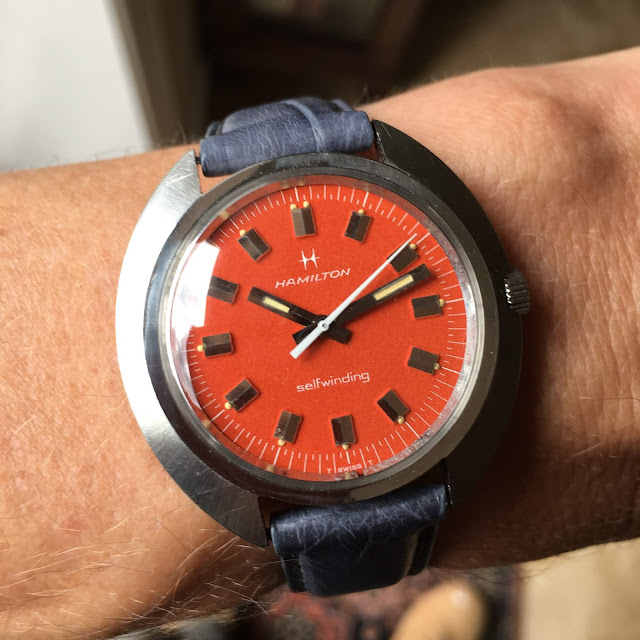