Back in June I did a post on Hamilton's most modern military watch, the Mil-W-46374D, Type 1.  There are a number of Hamilton military models and quite a few fakes out there too, by the way.  The 46374D is arguably the best, in my opinion.  The GG-W-113 is a very close second.  The Mil-W-46374B is okay and looks almost identical but it's really meant to be disposable.   Unless it was in great shape, I'd pass on most 46374Bs.

Back in the Spring I restored a GG-W-113 as well as a British military W-10 field watch.  They both feature the Hamilton 649 movement which was based on the ETA 2750 caliber.  As I found out, there are a variety of Hamilton models from the 1970's and 80s that used the 649 movement.  One of them was an early Khaki field watch.

I recently came upon another Khaki field watch in serious need of some TLC.  I suspected it would also have a 649 movement, but I was pleasantly mistaken.

As received, you can see it has seen better days.  It's quite beat up and the minute hand has lost most of its lume.  Notice this watch doesn't have fixed spring bars.  It was intended to be used with a two-piece strap. 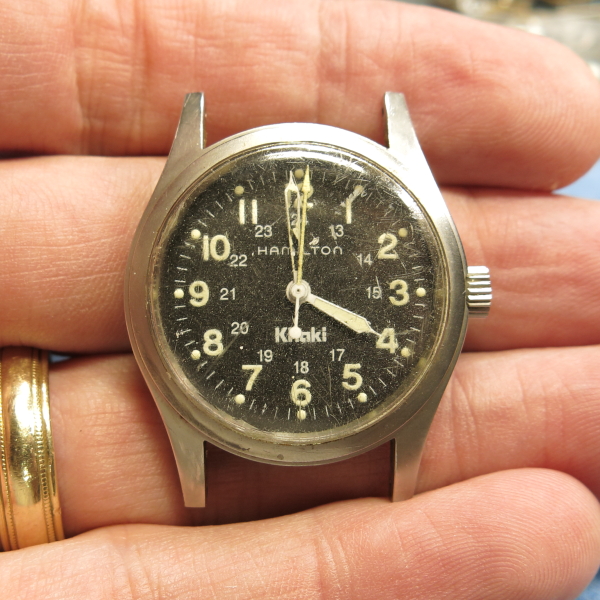 The case is a two-piece design, which I personally prefer since you don't need to contend with a rusty two-piece stem like on most front-loader designs.  The model number of this watch is 9415A.  I'm not exactly sure what years this was made but my guess is mid-to-late 1990's. 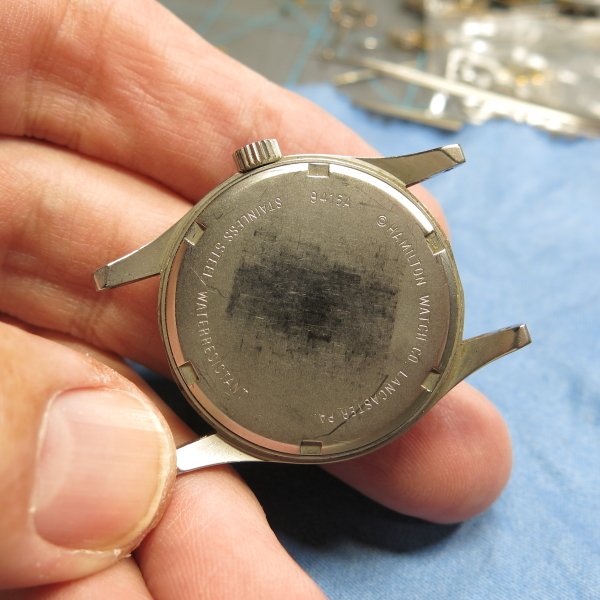 Low and behold, inside is an ETA 2801-2.  This is the same movement that is used in Hamilton's new Khaki Field watch that was re-introduced this year!  It's also what you'll find inside a Mil-W-46274D Type 1. 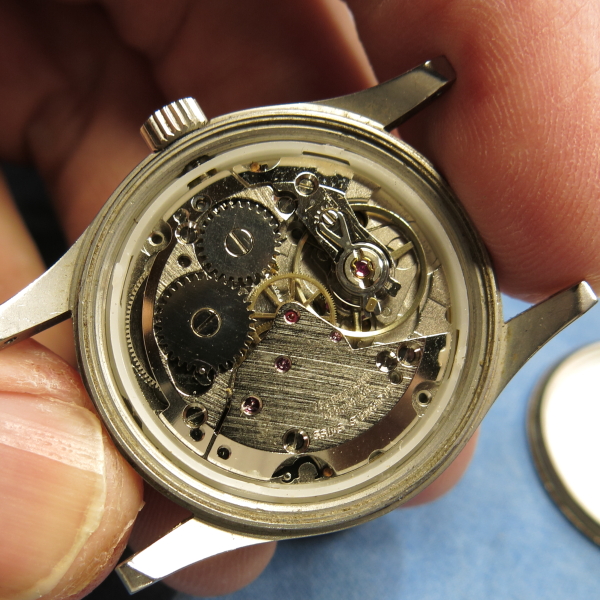 Once the hands are removed, there are little levers on opposing side that you swing out to free the dial feet so the dial can be lifted off. 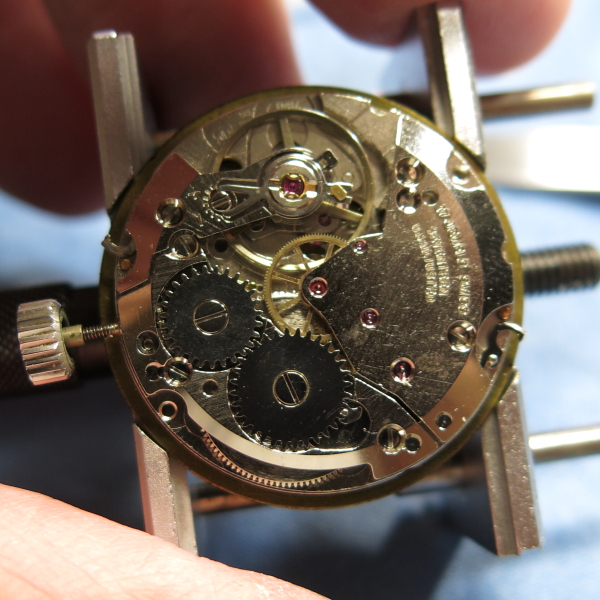 The 2801-2 can be outfitted with a date complication and you can see the empty spaces where those parts could go.  Based on the luminous dust under the dial, this watch is long overdue for a cleaning. 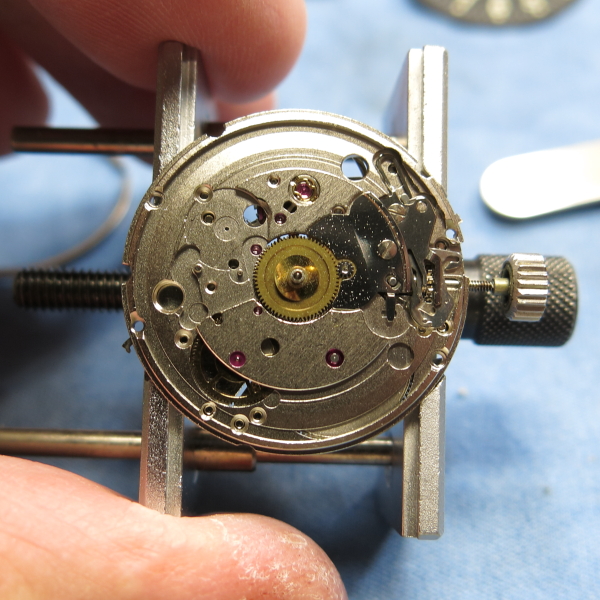 This movement has a hack mechanism and the golden lever is temporarily attached to the bottom of the barrel bridge. 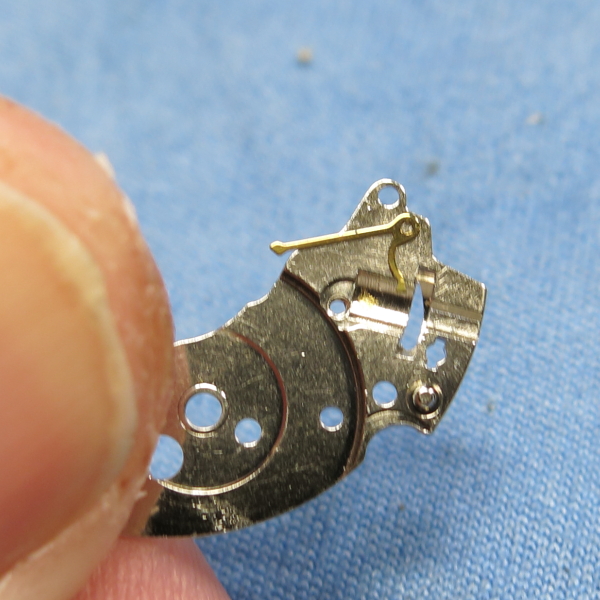 You can see 2801-2 and the ETA logo stamped under the balance wheel. 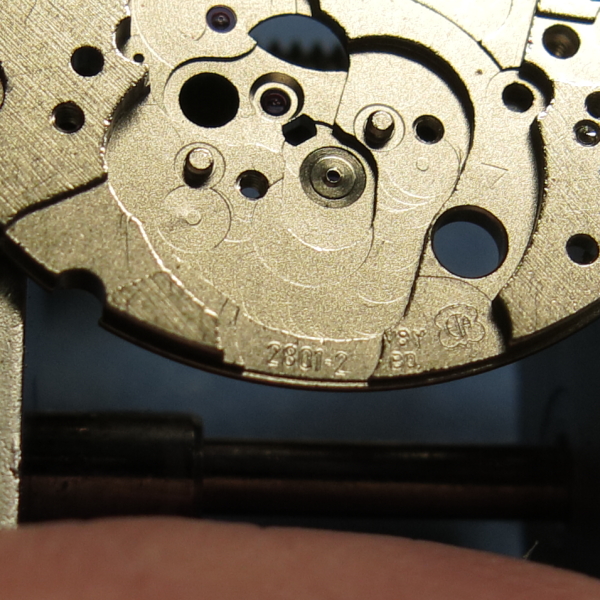 While the parts are in the cleaner I will clean and repaint the luminous hands. 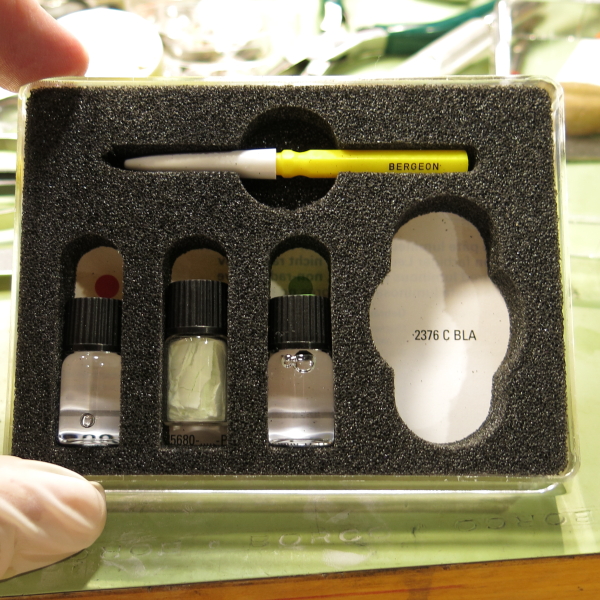 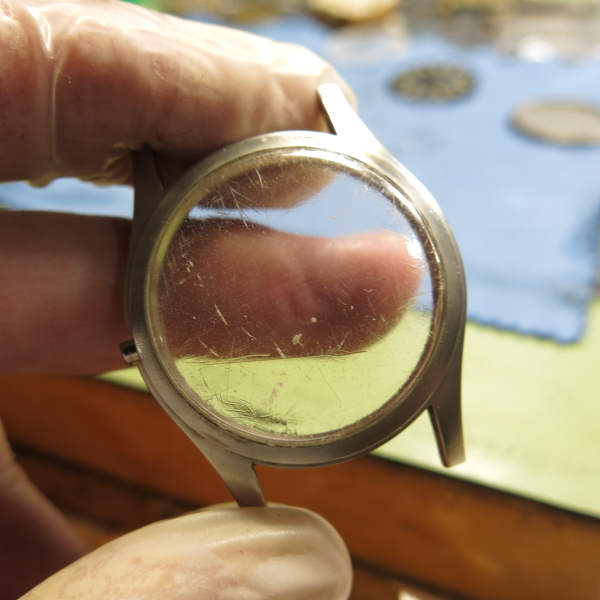 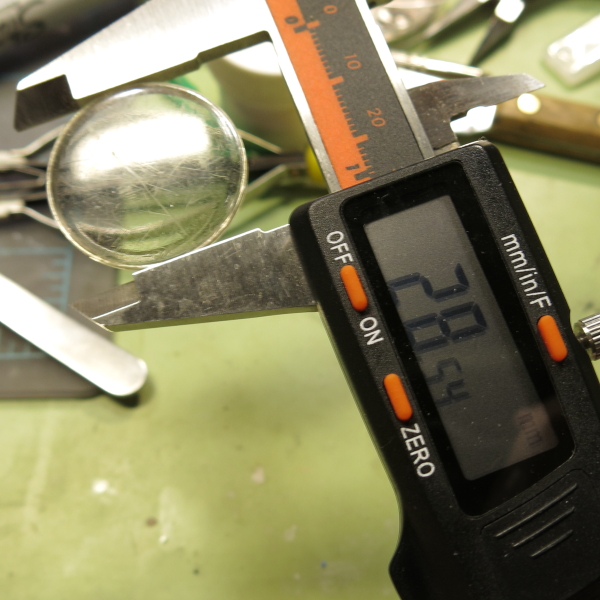 I like the profile of Stella WRA crystals and they're my go-to choice for these applications. 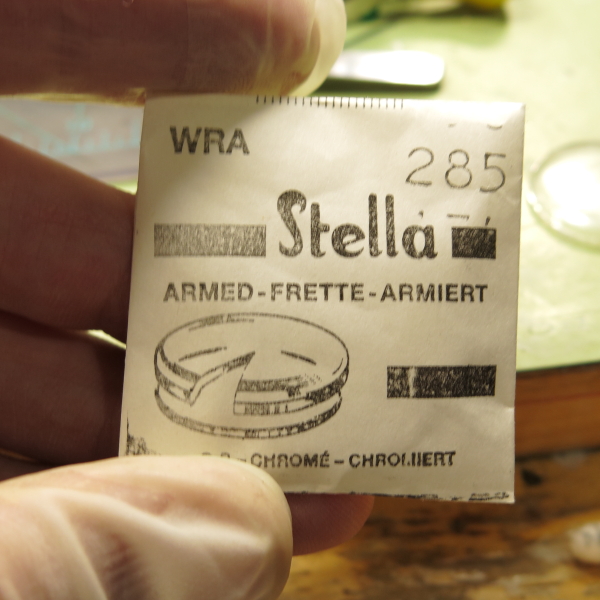 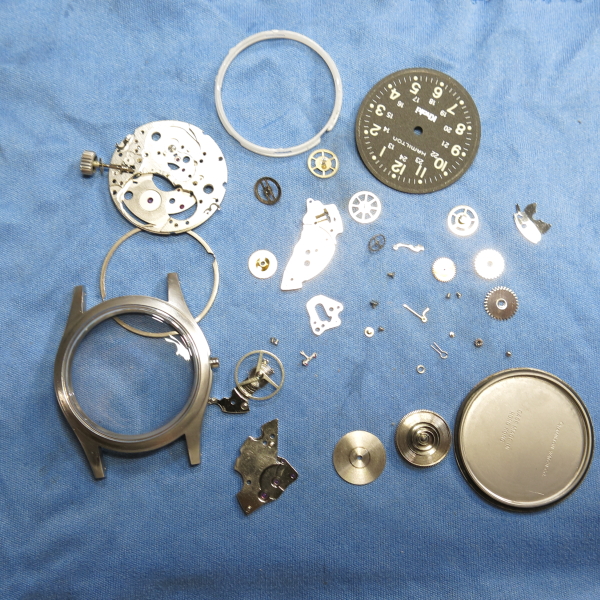 I need to remember to reinstall the gold hack lever.  Most watches don't hack so it's easy to forget this very specialized part.  It engages the clutch wheel and pivots when the watch is in time-setting position.  The long side of the lever will just touch the balance wheel and stop the watch until the clutch moves back into the winding position. 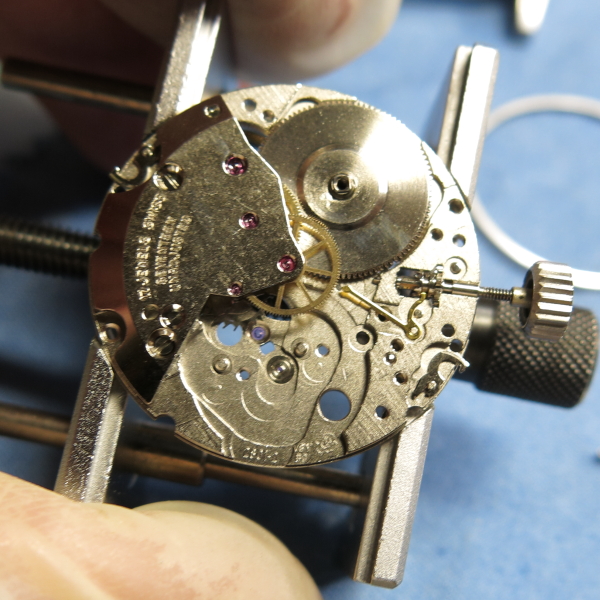 The watch is ticking away.  The 2801-2 has a 28K beat per hour rate so it's noticeably faster than a garden variety vintage watch with an 18K BPH rate.  28K is crazy fast in comparison. 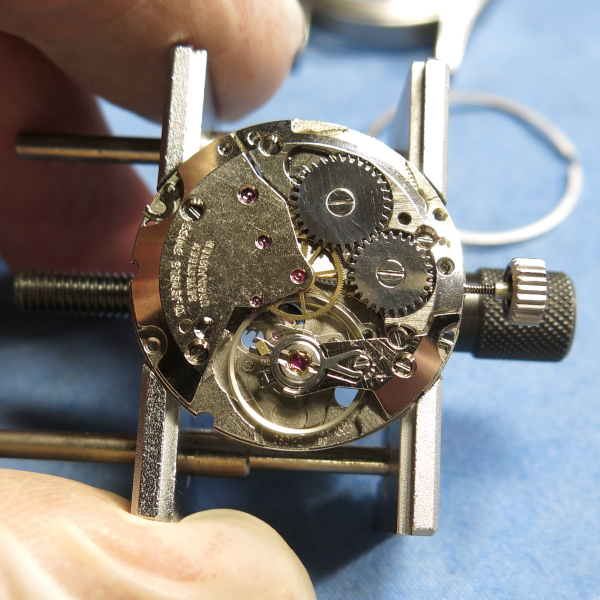 Whoa... something isn't right.  Maybe a spec of dust on the hairspring or pallet fork. 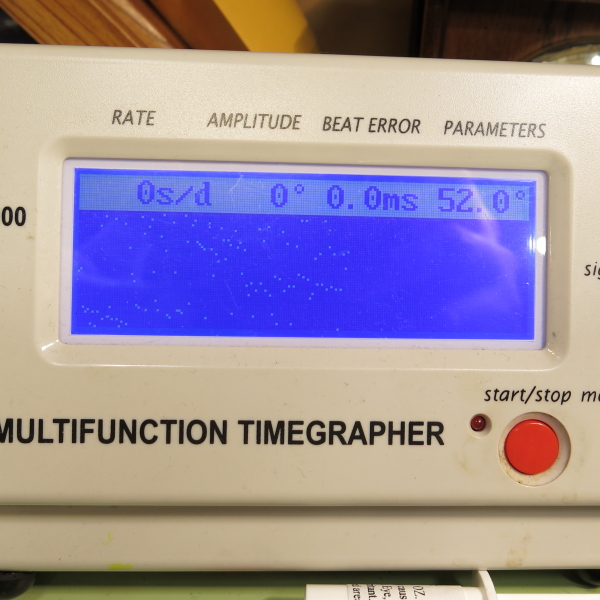 I recleaned the hairspring several times and finally got a clean signature.  The amplitude is a little low but that could be related to having not wound the watch up a lot. 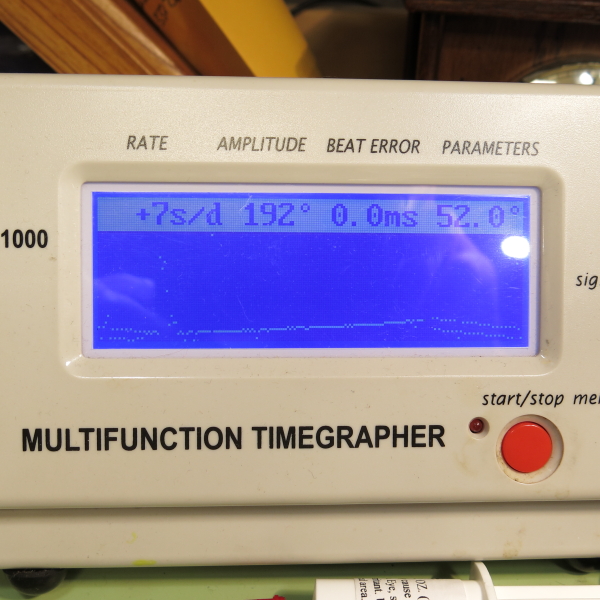 Well, a new crystal and fresh luminous paint makes a world of difference, don't you think?  This watch looks very similar to the new Khaki field watch but it's a little smaller. 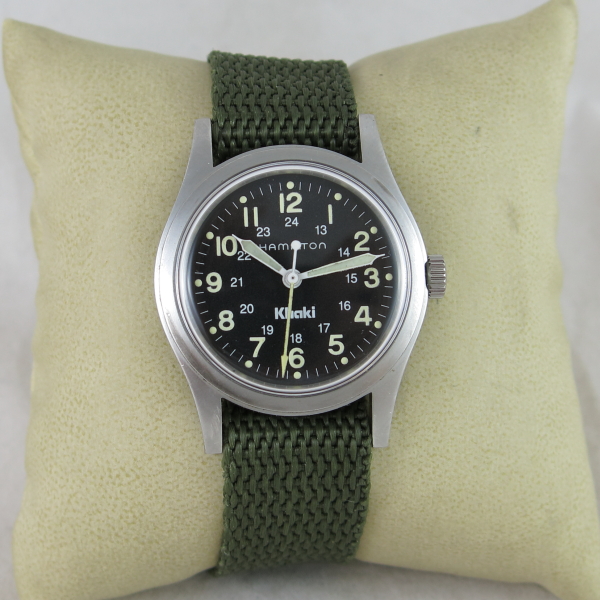 Here's a photo of Hamilton's new Khaki Field Mechanical.  I think it's more closely inspired by the Mil-W-46274D but there's no doubting the strong family resemblance.  The new model is 38mm in diameter while my project watch is closer to 33mm. 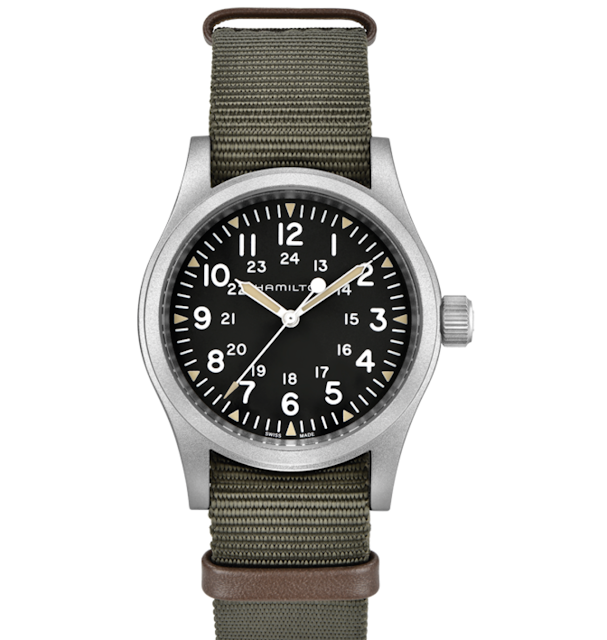 Before the 9415A there was the 921980 (I'm guessing from the 1980s).  Can you spot some of the differences?  First, the older model uses the stylized H and modern italic Hamilton logo.  The 9515A used the more vintage sans-serif logo that WWII-era watches used.  It's the same logo the new Khaki Field Mechanical uses too, by the way.  Also, the numbers on the 9415A are slightly bolder than on the 921980 version.  You can't tell from the outside that the two Khaki models use different movements.  The locations of the dial feet are not the same so dials are not interchangeable, even though they are both based on ETA grades. 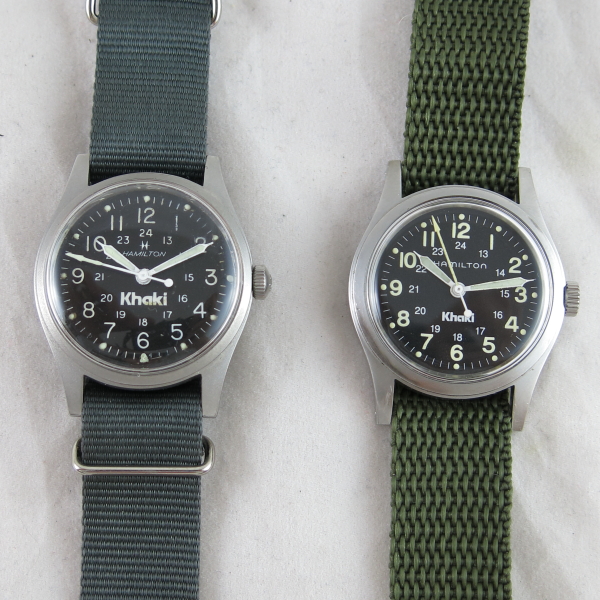 Just to spice things up a little more, here are the two Khakis with their big brother, the Mil-W-46374D.  The military watch (with the red strap) does not say Hamilton on it - at least on the outside. The hour markers are triangles, as opposed to dots.  So you can see the new Khaki Field draws most of it's inspiration from the Mil-W-46374D, including using the same movement - the ETA 2801-2. 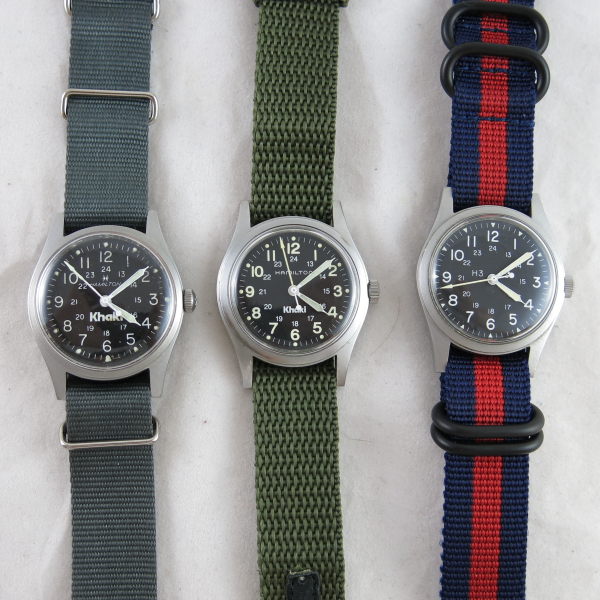