Ah, the perils of buying project watches.  Sometimes you get a lot more than you bargained for.

I recently came upon what I thought would be a promising project watch.  It's a new model for the blog and I thought I might get a deal on it since it had some issues.  The seller listed it as "for parts". 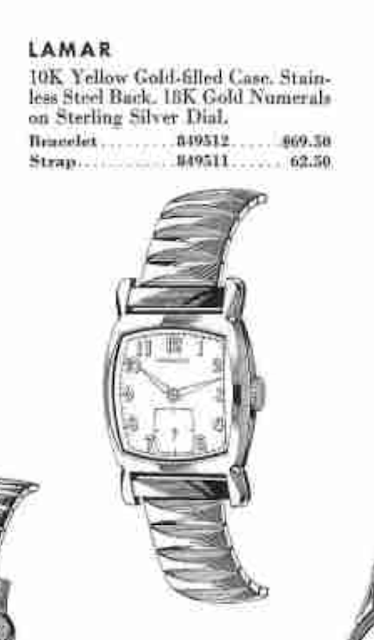 The Lamar was an entry level Hamilton and produced at the low end of the price spectrum at $62.50 for the model on a strap.  That's still about $590 in today's dollars when adjusted or inflation.  It featured a gold filled bezel with a stainless steel back.  The dial is sterling silver and the numerals are solid 18K gold.

Tucked inside the Lamar you will find either a 747 from the last production run or the 730 movement which replaced the 747 in 1955.

As I said, my project watch had some obvious issues.  For starters, it's missing the 9 from the dial.  The case is a bit dirty and the crystal is beat.  I've seen worse but this watch must have been a railroad model - as it proved to be a train wreck.

The case back is stainless steel so it shows very little wear.  In fact, I think it still has the original brush stroke texture on the back. 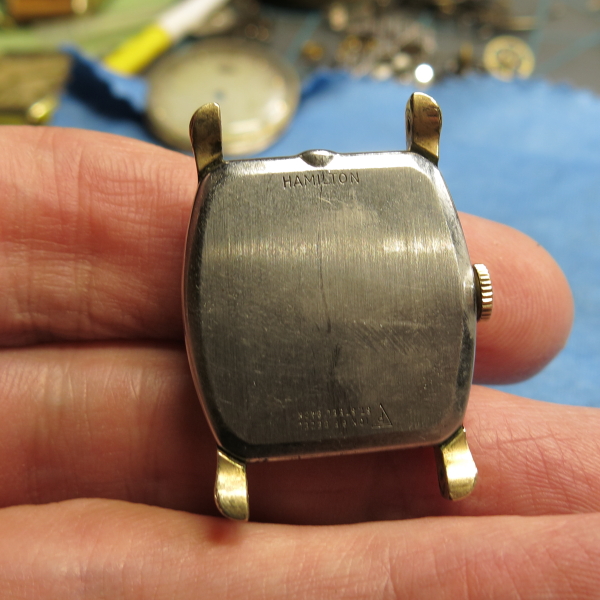 The number 9 is missing in action.  It's not inside the case, unless it's under the dial. 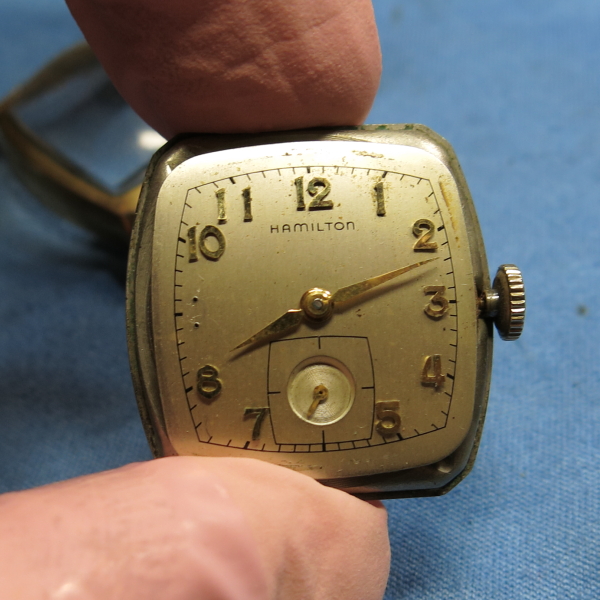 The 17 jewel 730 movement is a fine movement.  It's basically a shock jeweled 747 and shares most of the same parts, other than the balance jewels.   If you look closely you might be able to see there's no hairspring!  The hairspring stud is there and so is the collet, but the spring itself is gone! 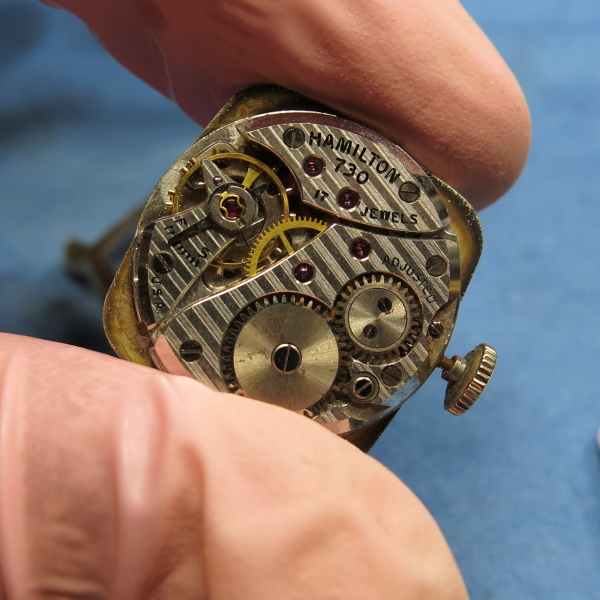 The inside of the case back makes it easy to identify the model.  This is an unusual case maker, I don't recognize the maker mark.  Turns out its a case maker called Pioneer Watch Case Co in Mount Vernon, NY. 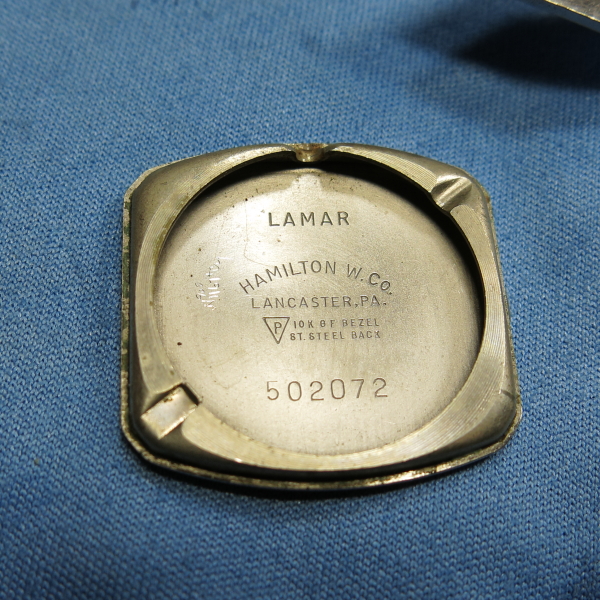 Normally you pull the hour and minute hands and then remove the dial.  The dial lifts the second hand off.  Not in this case though... the arm of the second hand came off but not the post.  It's still stuck on the 4th wheel bit.  Hopefully it will slide off when I pull the 4th wheel out from behind the main plate. 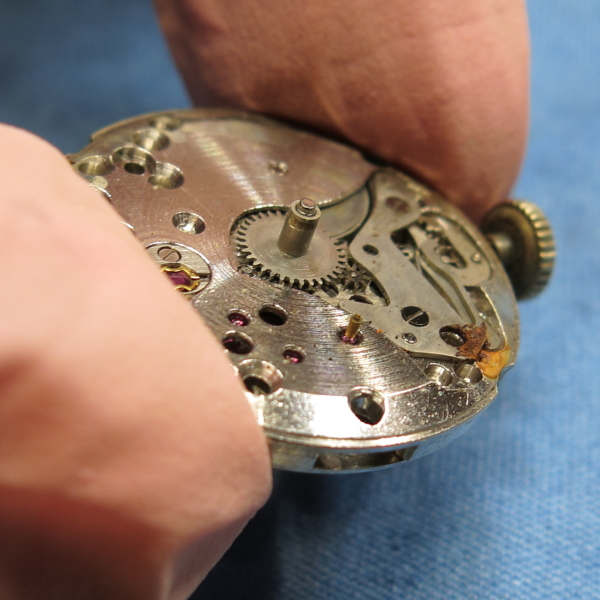 With great care I line up the two parts of the second hand and I will use a stake to press them together again. 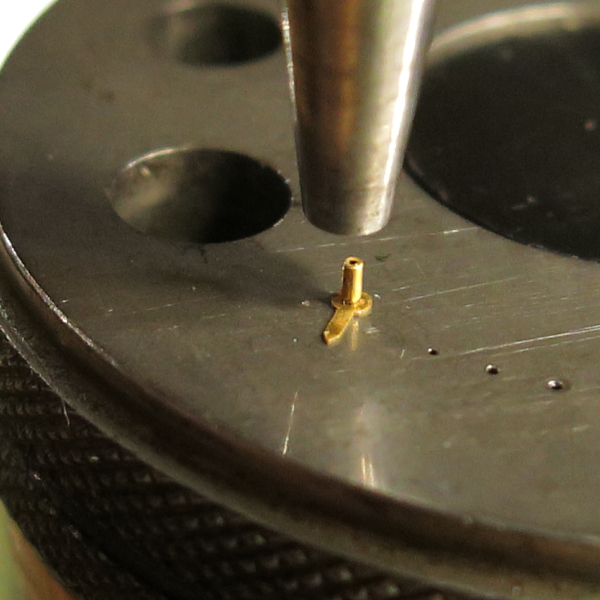 I can get the numeral 9 from another donor dial.  This font is a little unique... notice the flat 3.  Since the 3's on the two dials match the 9's should too. 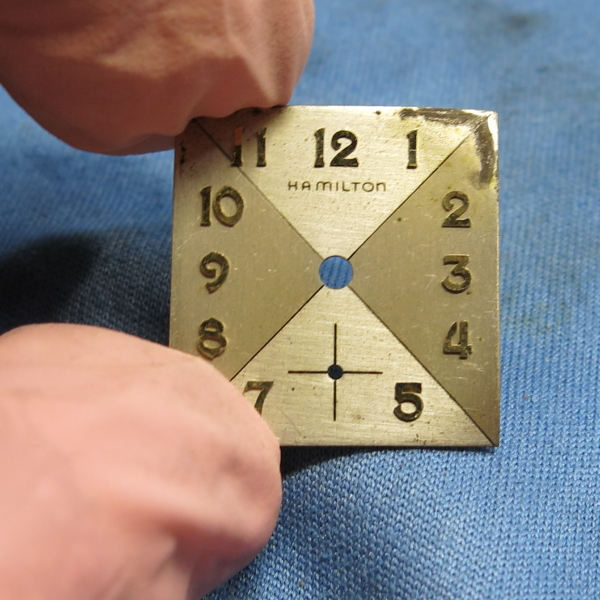 To get the 9 off, I need to look for the tiny rivets on the back of the dial and then push the number out from the back. 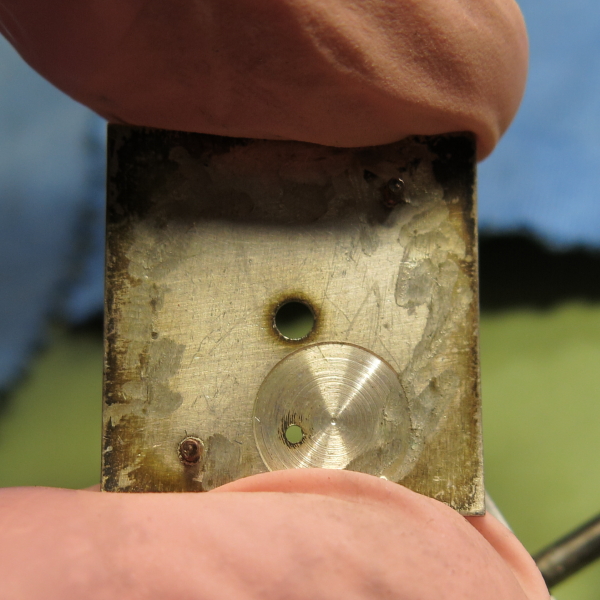 Once the number is pushed out I can get some fine tweezers under it and lift it the rest of the way off. 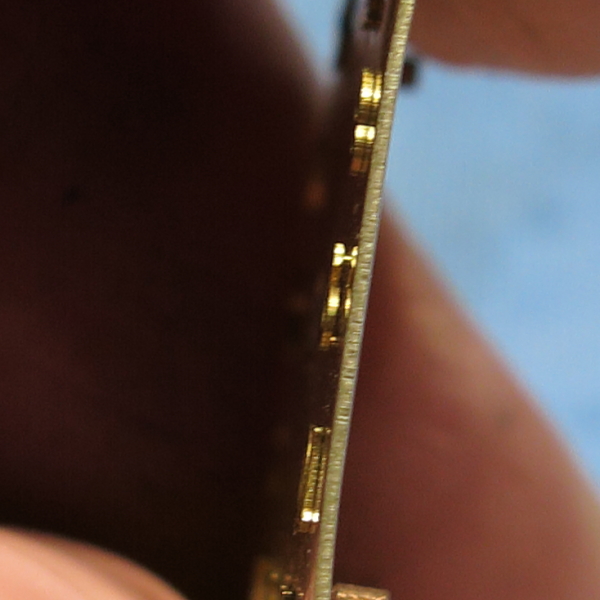 Now I just need to line up the two posts of the number with the two holes in the dial and press it down.  A little UV glue on the back will keep it secured. 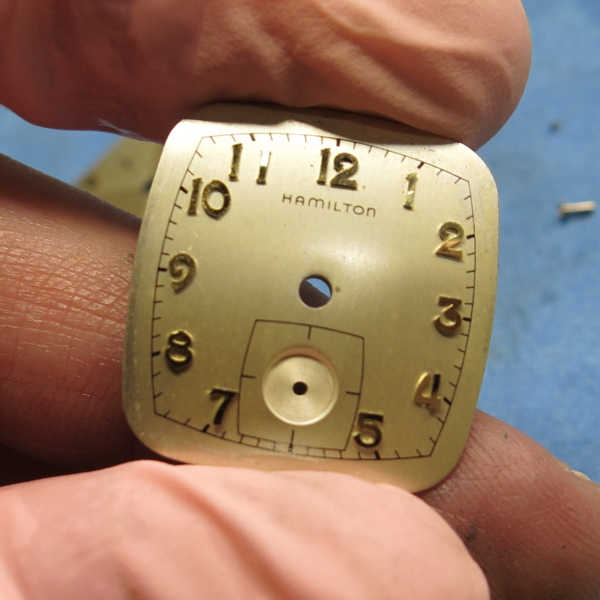 A new crystal is definitely in order.  This crystal is the proper cylinder style, rather than flat glass. 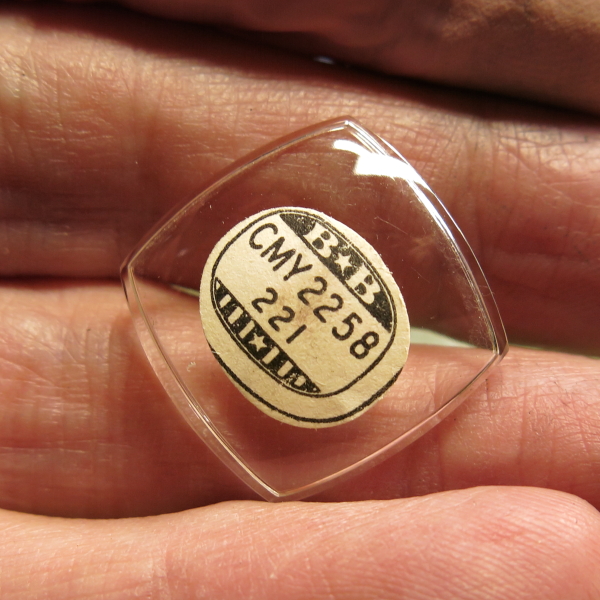 I happen to have a 747 balance with a bad staff, perhaps I can move the hairspring to the balance that came with the watch?  I give myself a 50:50 chance of success.  The hairspring is actually matched to the mass of the balance and if the two balances are different, the hairspring may be too short or too long.  With luck it will be somewhere around the right length. 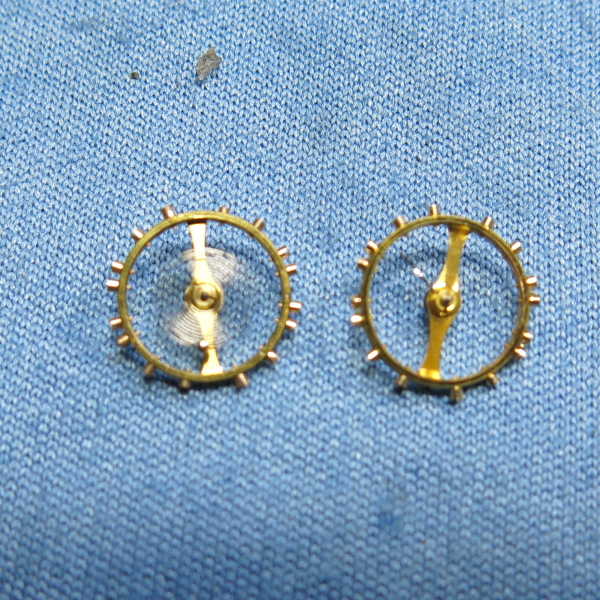 Darn!  My balance is also missing the impulse jewel on the roller table.  Oh well, I'll have to move the roller table from the balance with the broken staff as well as the hairspring. 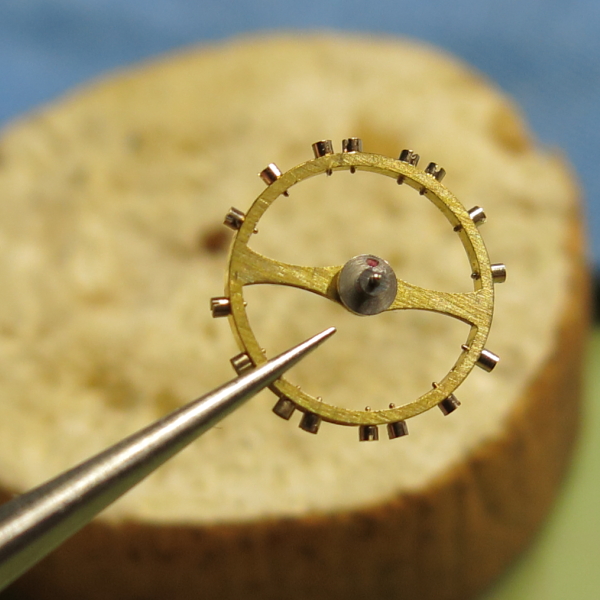 A staking set is the best way to remove the roller table.  The balance is held in a special device and a stake punches the balance arbor down and out of the table. 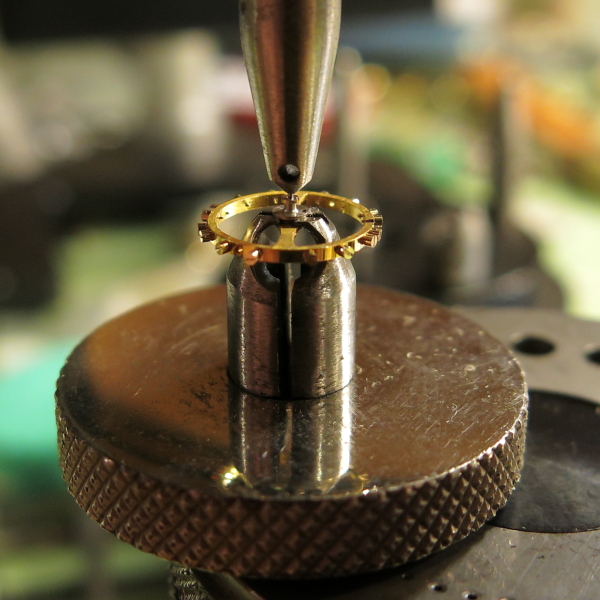 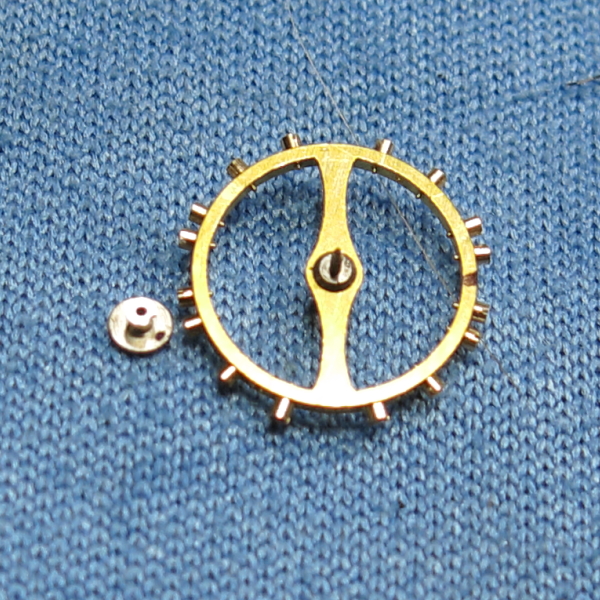 A couple of stakes in my staking set, along with very careful alignment, allows me to tap the roller on the new balance staff.  I just tap it down until it seats. 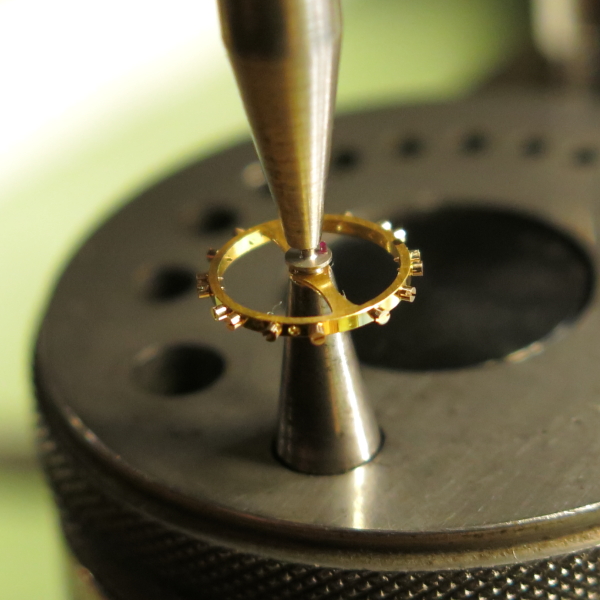 Now I flip the balance over and line up the hairspring with a good guess of where the stud should be relative the impulse jewel.  Then I press the hairspring collet on and hope it will be "in beat" or lined up properly.  I can adjust it later if needed. 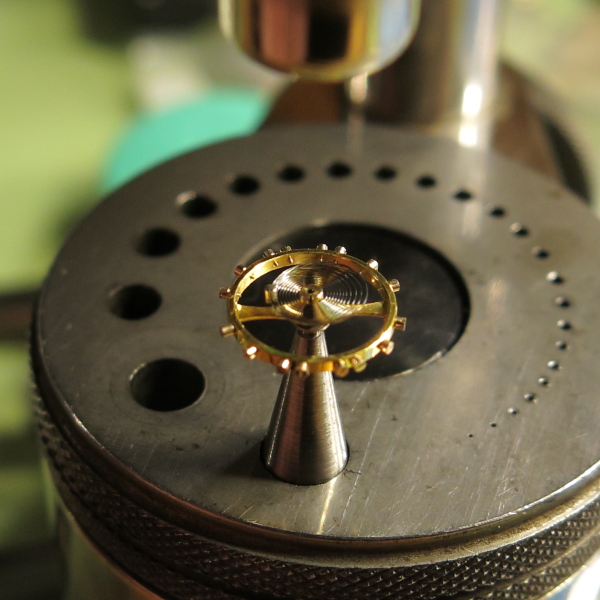 Okay, my "new" balance is ready for installation. 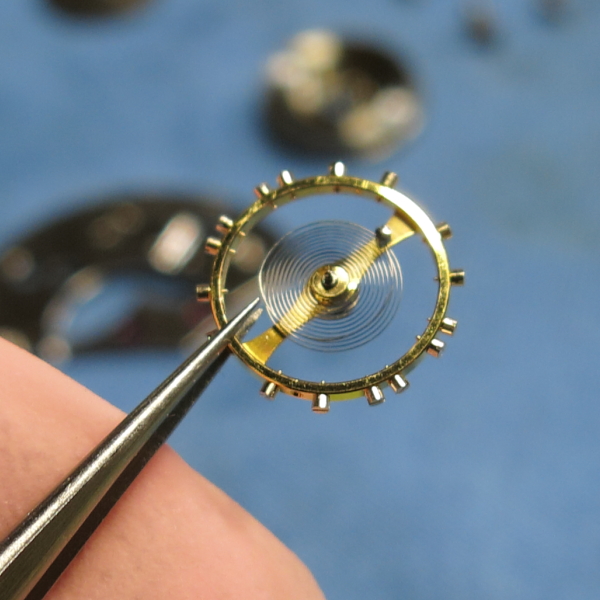 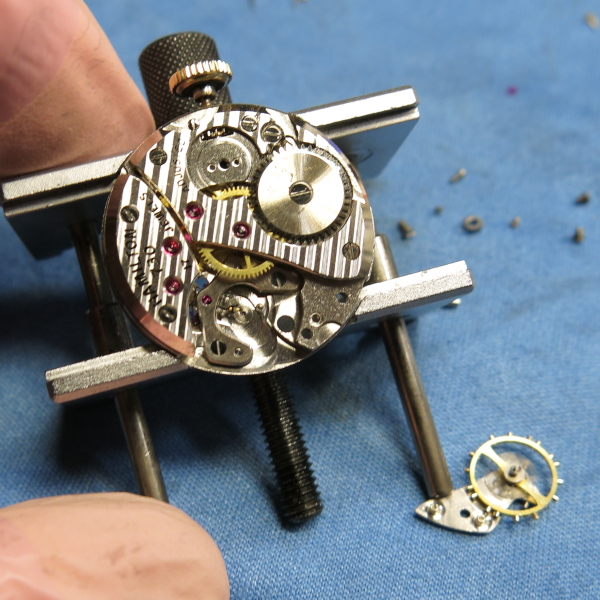 Check out this poor little pallet fork!  Anything look unusual to you?  It's not supposed to be bent like that.  Now I know what happened to the impulse jewel... it broke off when someone jammed the balance hard enough to bend the pallet fork around a banking pin! 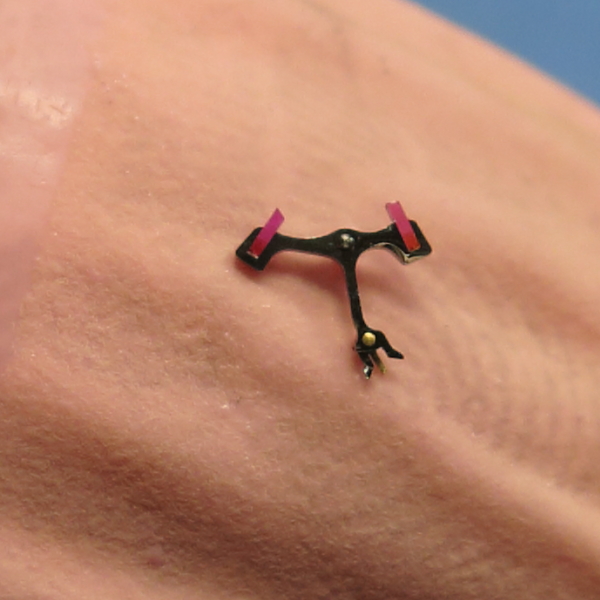 With a replacement pallet fork and the rebuilt balance installed, the watch is now ticking away with good motion.  Time to find out what the watch timer thinks. 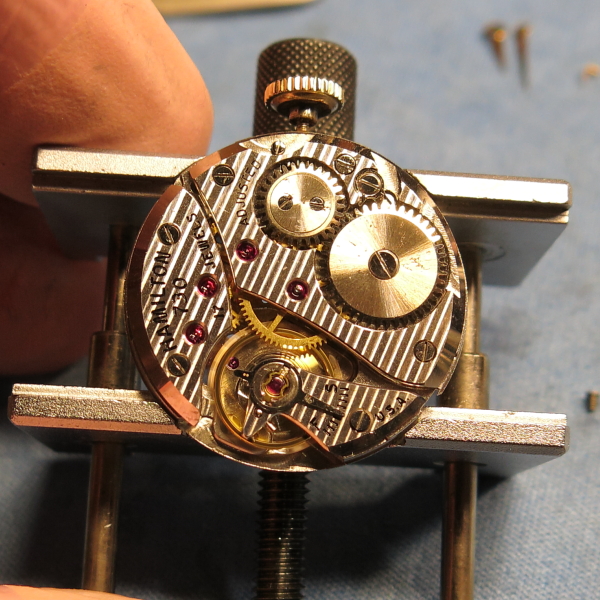 Hmmm... well it has good amplitude, I'll say that for it.  The beat error is a tad high but the watch must be running slowly enough to not register a time... maybe 10-15 minutes slow per day?  It could be super fast too...you can really tell from the pattern but the fact there's an amplitude and a beat error indicates it outside the range of seconds per day the timer can display.  I could put hands on the movement and see what is really happening over time.  However, I think it's time for Plan B, a donor balance from a parts movement. 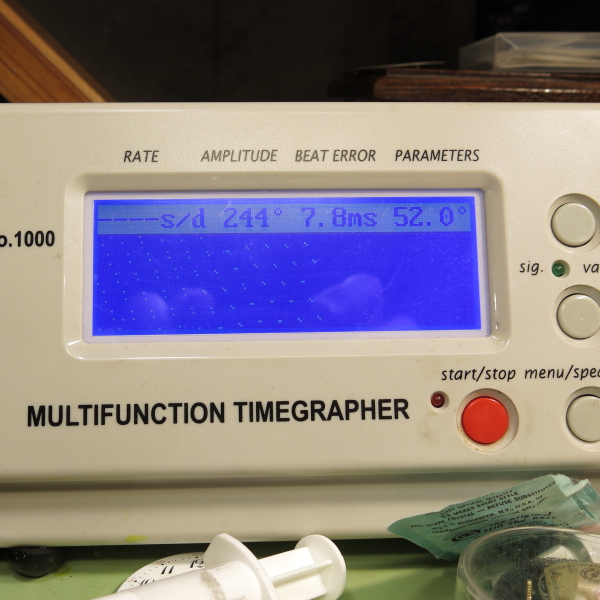 My replacement balance runs fast but the beat error is a bit high.  So I'll have adjust the hairspring. 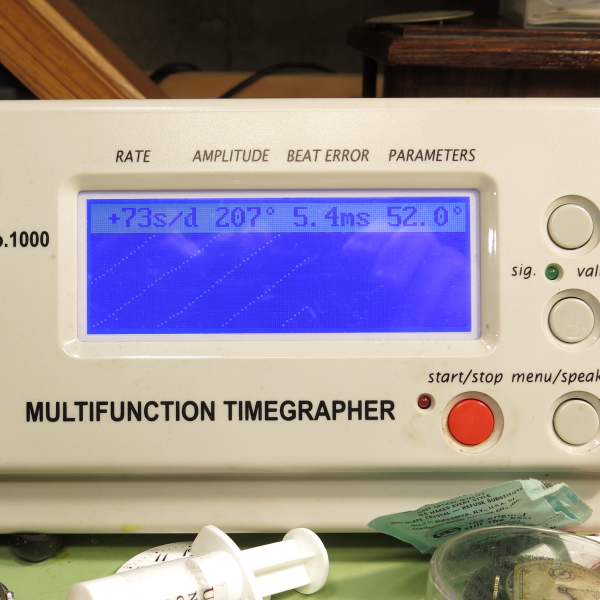 Alright!  Things are looking good now.  One final tweak to slow the watch down and this movement is finished. 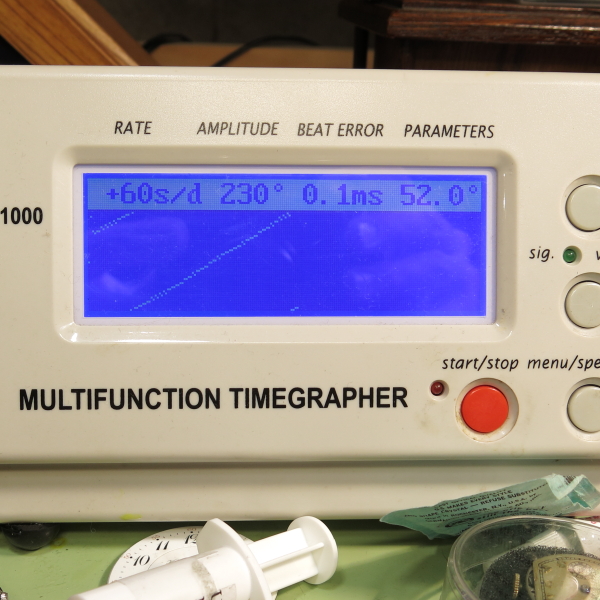 Well, I have to say that it was a lot more work than I bargained for but this 60+ year old Lamar is back in action and looking great.  There are couple of minor spots on the dial but most people I know born in 1955 have a few spots too.  So this watch looks great! 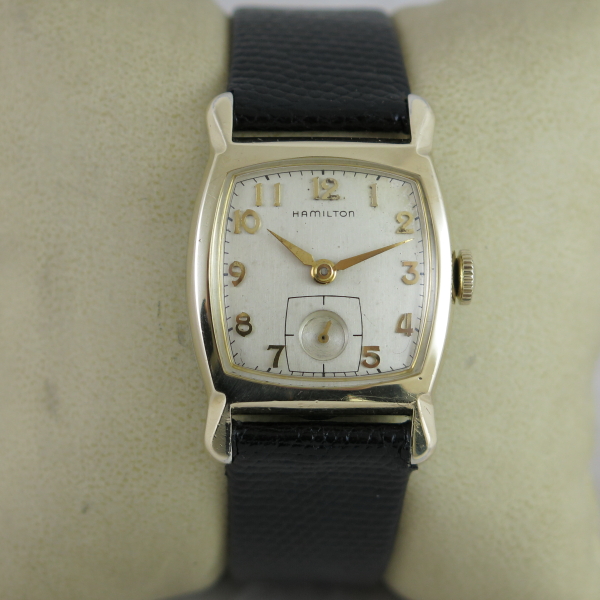