Today is November 10th, the 243rd birthday of the United States Marine Corps.  As a 10 year veteran of our US naval service, I have tremendous respect for the Marine Corps and a number of life-long Marine friends.

As Eleanor Roosevelt said, "The Marines I have seen around the world have the cleanest bodies, the filthiest minds, the highest morale and the lowest morals of any group of animals I have ever seen.  Thank God for the United States Marine Corps". 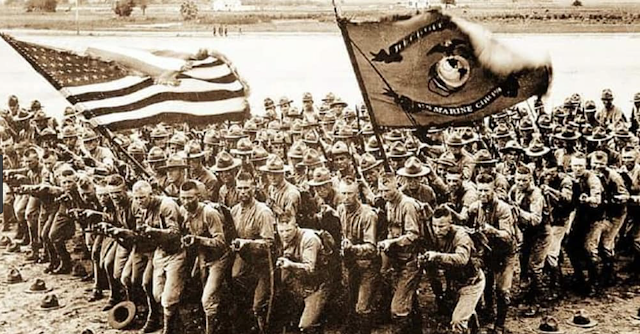 One of the soft spots I have in my watch restoration heart is for military models.  Hamilton made a gazillion WWII watches for the US Army, Canada and even the Russian army.  They also made considerably fewer watches specifically for the US Navy and Marine Corps.

I've restored dozens of military watches and I've had the parts for another few laying around for a while.  One of the sets of parts would make a great "homage" watch.  An homage watch is something that looks authentic and is not meant to deceive but rather to honor.  I figured I could showcase my project while also pointing out some of the pitfalls of military watches.

When it comes to authentic WWII watches, there are a lots of authentic examples for sale out there and there are also lots of bogus ones.  For example, on any given day you can see a seller on eBay selling Hamilton USN BUSHIPS Canteen watches from WWII with movements made after 1955... go figure.  He doesn't seem to want to point out that his watch is bogus but he also doesn't tend to sell them for the $2000 an authentic Canteen will go for.

The best way to make sure you don't get fooled by a vintage military watch is to do your homework.  Understand what movement should be inside the case, know what the dial should look like, know what the case markings say, should say, or how they should be stamped.  If something doesn't look right, move on... there will ALWAYS be another.

My project watch consists of authentic parts from the 1940's, some of which are military surplus.  The main visible part is a parkerized case.  This dull-finished case is marked ORD DETP USA and intended to have a serial number stamped onto the back.  I've bought these new old stock in the past and the packages have usually been marked with information from 1948.  This style of case was used after WWII, like for the Korean War, but it's set up for the 6/0 Hamilton 987A movement and not the later (and smaller) 8/0 sized 747 used in the Korean War USMC watch.

The dial I have has the USMC eagle, globe and anchor logo.  I've also had dials for the US Navy and the Army Air Corps.  They also came in DoD packaging and I suspect they were from the military exchange system or something like that.

All I really needed to supply was a movement, hands and a stem. 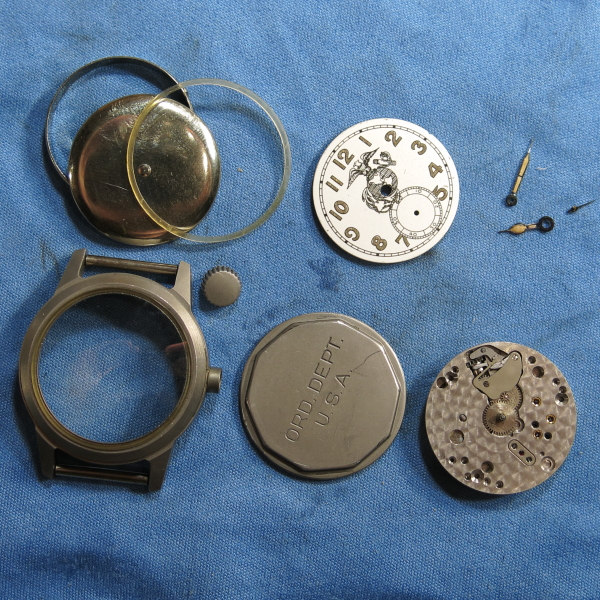 My movement has a serial number that dates to 1942... the early days of WWII.  As you can see by it's dull finish, it's been a while since it was cleaned. 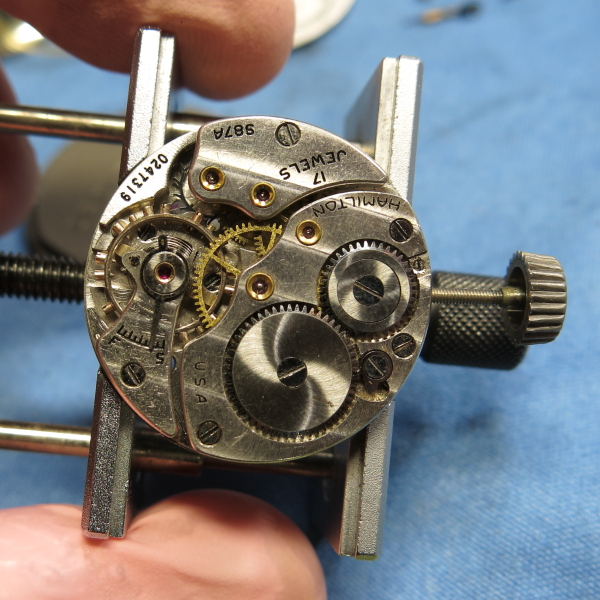 The blue steel mainspring inside has "set" and lost a lot of it's potential energy.  That's not unusual for watches from this era. 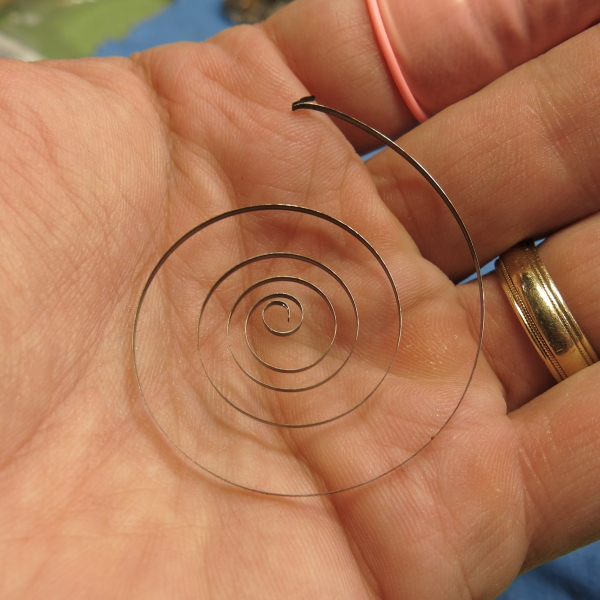 A new white alloy Dynavar mainspring will be huge improvement to the energy of this watch. 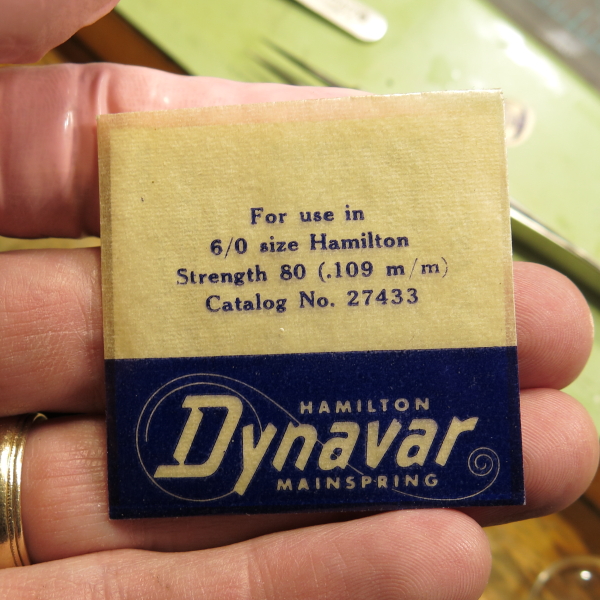 While cleaning the movement I realized the center wheel jewel in the main plate is broken.  The watch would probably run like this but the jewel should be replaced before I reassemble watch. 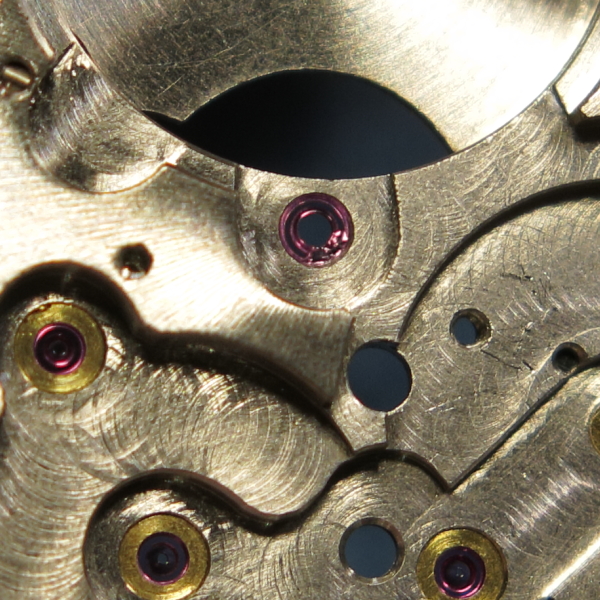 One option is to remove the jewel from another 987A and install it in my project watch.  I have a donor with fine jewels and the serial number is also from 1942, so why not just switch plates?  It's funny to think that these two main plates were probably at the Lancaster factory together 76 years ago and now they're here on my workbench.  Oh the stories they could probably tell! 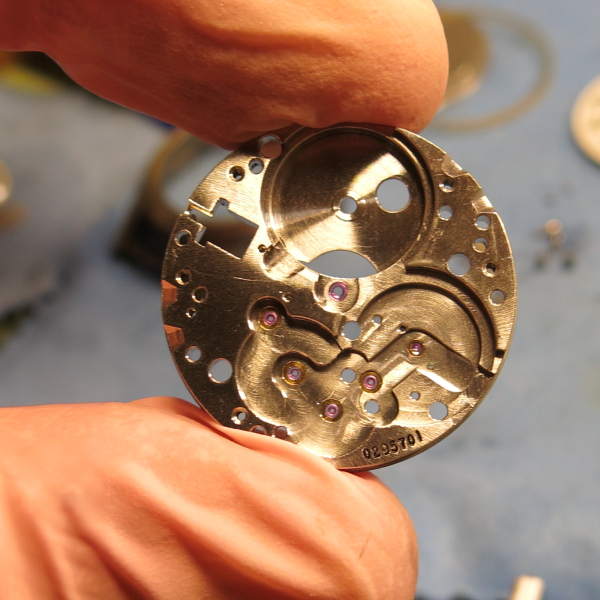 Everything is cleaned and readied to be reassembled. 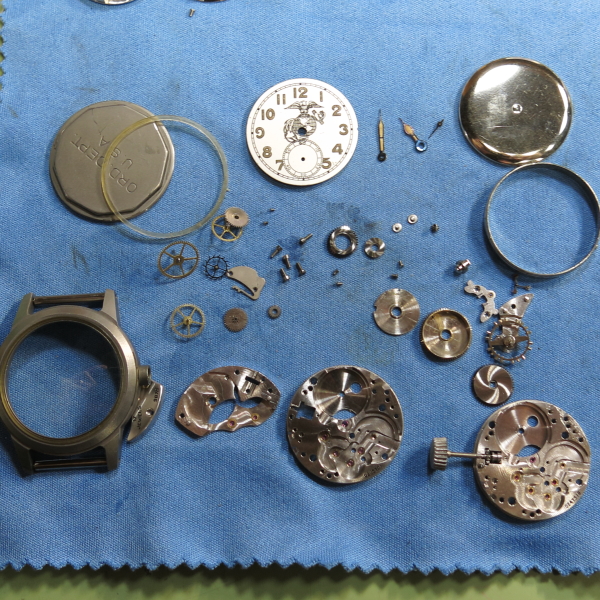 Here you can see what a fresh mainspring looks like.  Notice the coil splays out and even starts to coil in the opposite direction.  The watch will run about 40 hours on a full wind with this mainspring. 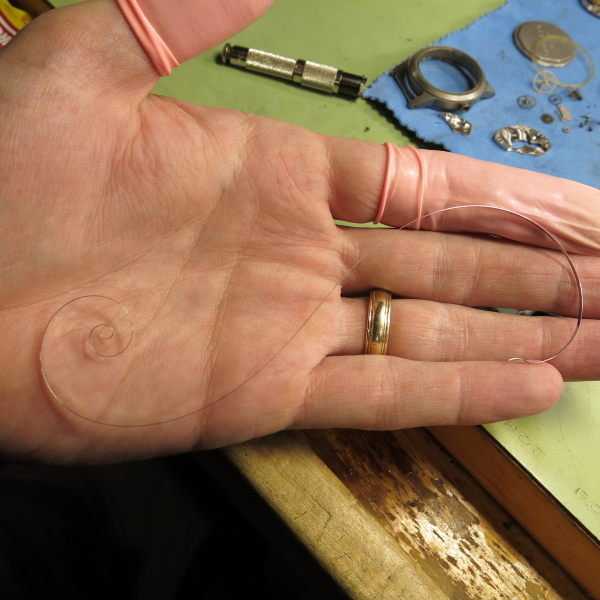 The reassembled movement is running on the timer with good motion... everything looks just as it should. 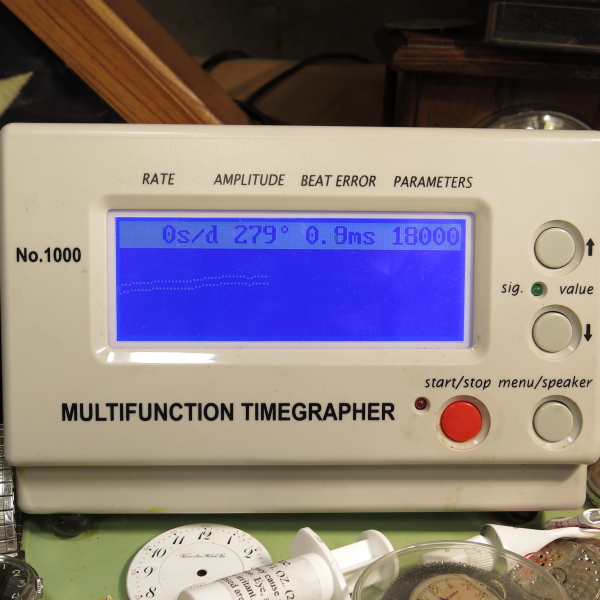 How better to complement a vintage WWII-era watch than with a vintage olive canvas strap? 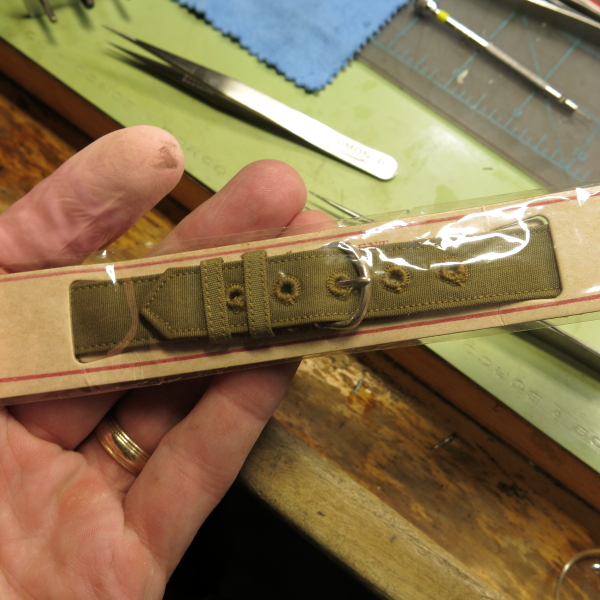 My project watch turned out exactly as I thought it would... awesome!  I've made several of these and given them to buddies when they retired from the service or on other special occasions.  This is the last dial I have though.   I suspect it will make a fantastic Christmas present for someone this year. 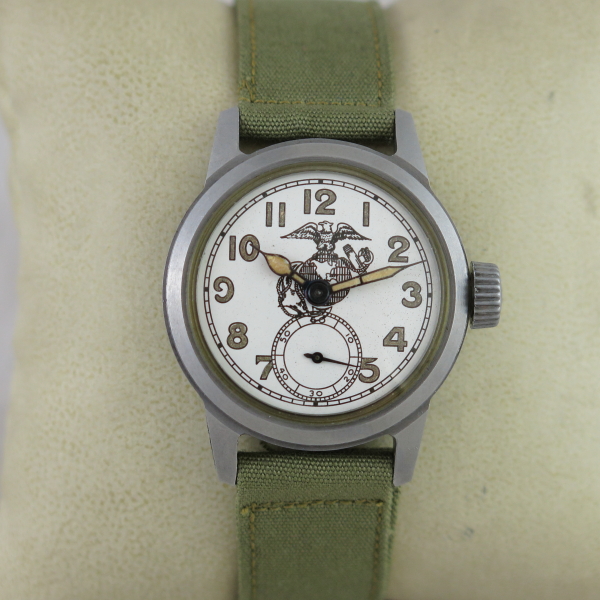