If you see a vintage Hamilton with a day of the week complication you can be assured it's a post-1969 model, as Day 'N Date models were introduced in the early 1970s.  You'll find them in a variety of solid gold, gold filled, stainless steel and gold electroplated cases.

Although some models were named, all models had a model number too.  Typically the model number started with the movement caliber inside... like 825 and ended with a dash number that indicated the case material, like -3 for stainless steel and -4 for yellow gold electroplate.

The Day 'N Date 5006 only shows up in the 1973 catalog and the artist's rendition doesn't really do the watch's details justice.  Looking at the drawing, it's clear the case has a brushed finish but is bright around the crystal and probably the sides. 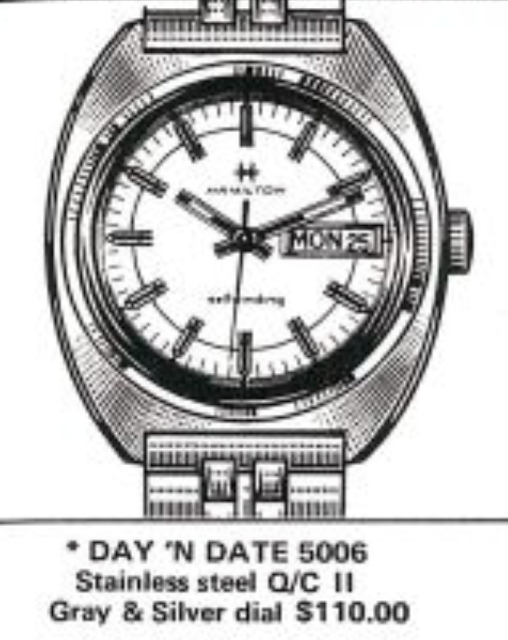 The 5006 has a Q/C II movement and that stands for Quick Change so the stem / crown has three positions... winding, time setting and date changing in between.  In the date changing position you can advance the date by turning the crown one direction and the change the day by turning the crown the other direction.  It's a great advance over the earlier calendar models that would change the day only by advancing past midnight.

My project watch is a typical vintage watch condition... it runs but it's a bit banged up.  It also has a bit of a clunking noise emanating from inside so I suspect the rotor might have come off.

You can see the dial is a silver color with a gray band around the perimeter.  The hour markers and hands have blue highlights and the red second hand really jumps out at you.  Those are details the catalog just can't portray. 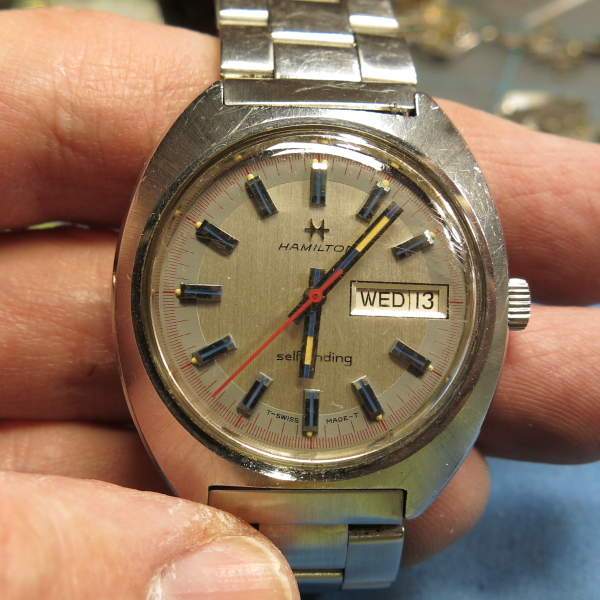 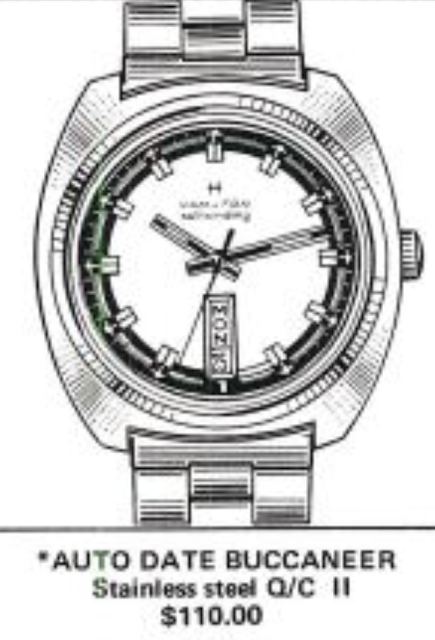 The case back is clearly marked 825001-3.  Based on the amount of DNA behind the watch, I'd say it's been a while since this watch was serviced. 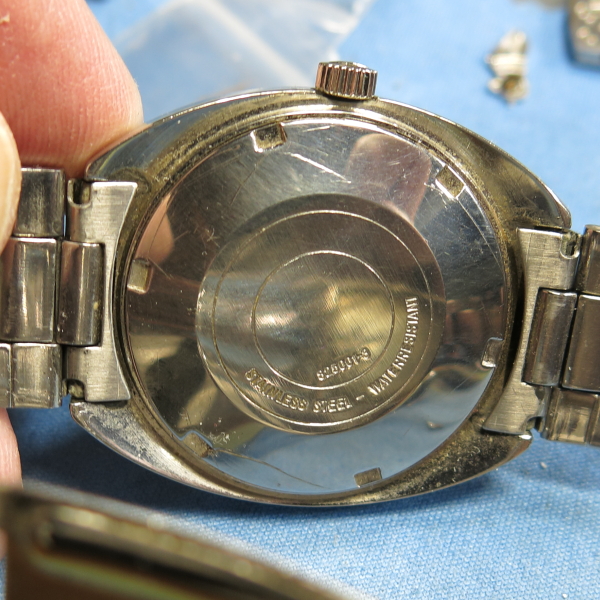 The deployment style buckle on the bracelet is clearly a Hamilton design. 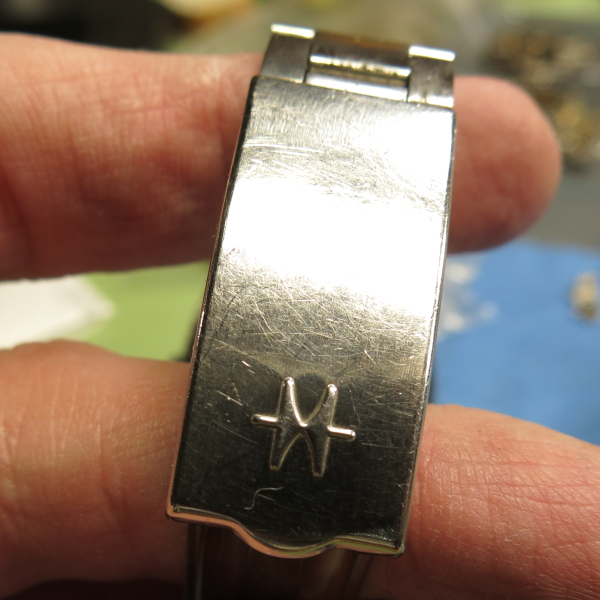 There's a little more DNA inside the back of the bracelet.  The bracelet was made by Drema, if you're curious. 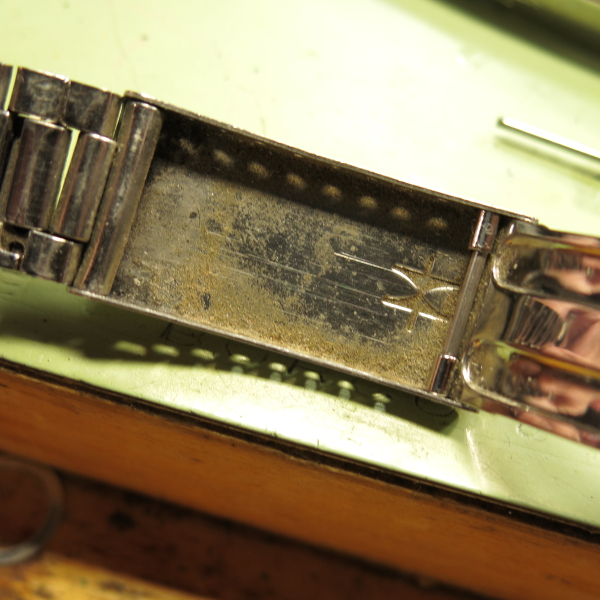 Inside the case is a 17 jewel Hamilton 826 movement, which is interesting.  I'm of the opinion that the 825 and 825 are largely interchangeable and based on the ETA 2789.

I think the clunking I heard was because there are no movement retainers holding the movement inside the case.  It looks like it's designed to use them and they are missing. 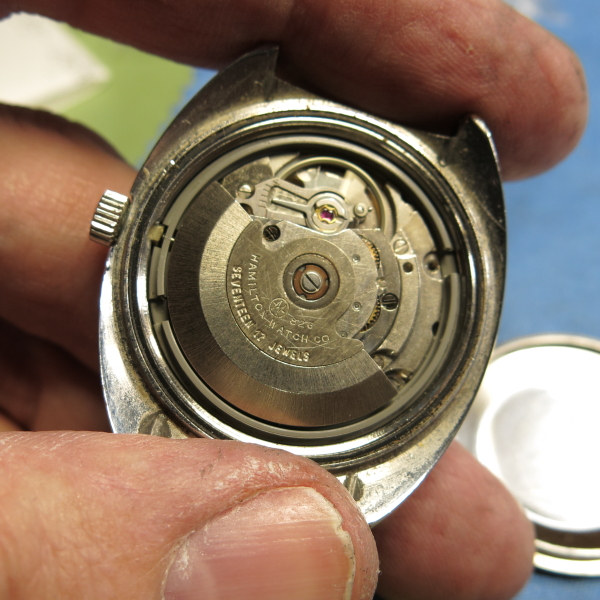 I didn't count them but it feels like there are twice as many parts to a Day 'N Date model than a typical automatic.  Some of them are springs and you need to be careful not to let them fly off never to be found again. 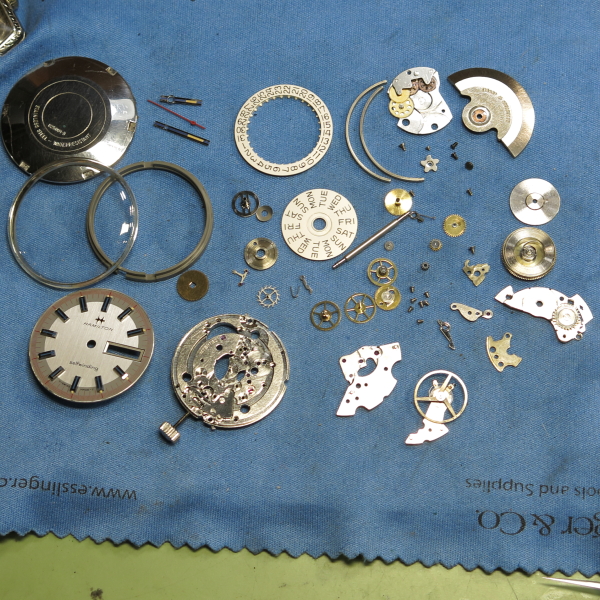 Putting the basic movement back together is a breeze compared to what comes next.  At this point the basic watch is reassembled and ticking away with a brisk motion.  This movement has a 21,600 beat per hour beat rate - visibly faster than the typical 18,000 BPH rate most vintage watches have. 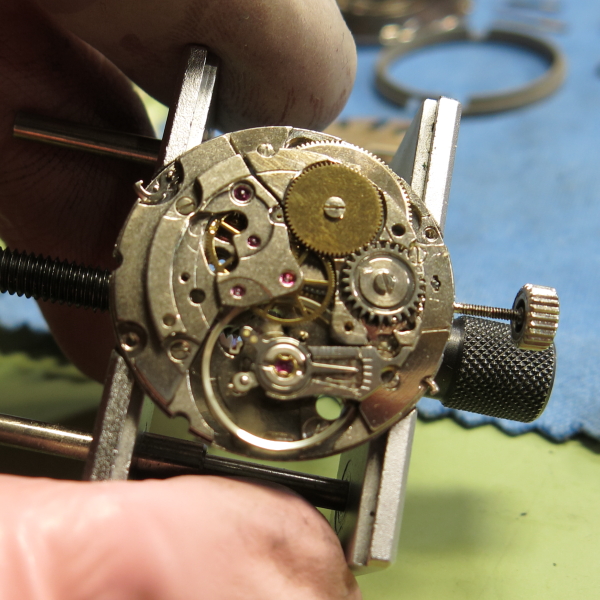 It's running a wee-bit fast but I can fine tune it easily enough. 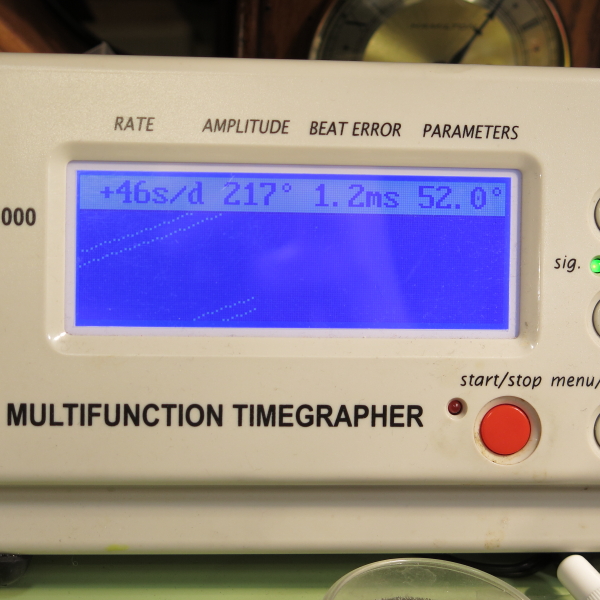 There... everything is right on the money. 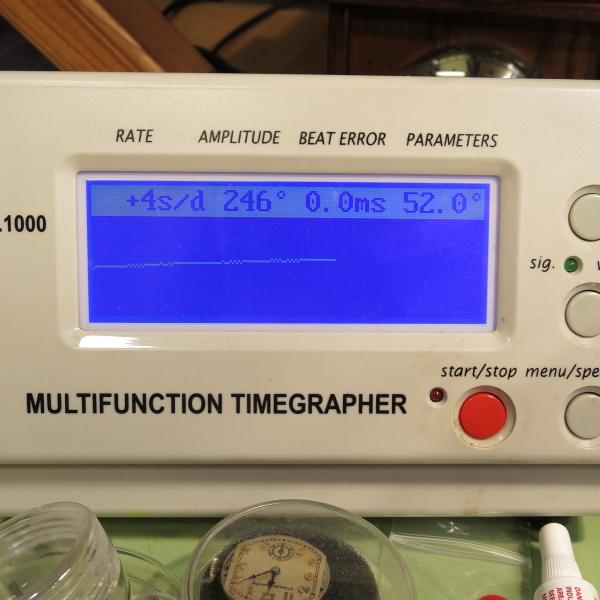 An ETA automatic is essentially a manual winding movement with an automatic framework strapped onto the back.  Just a couple of screws hold the oscillating weight in place once it's in position. 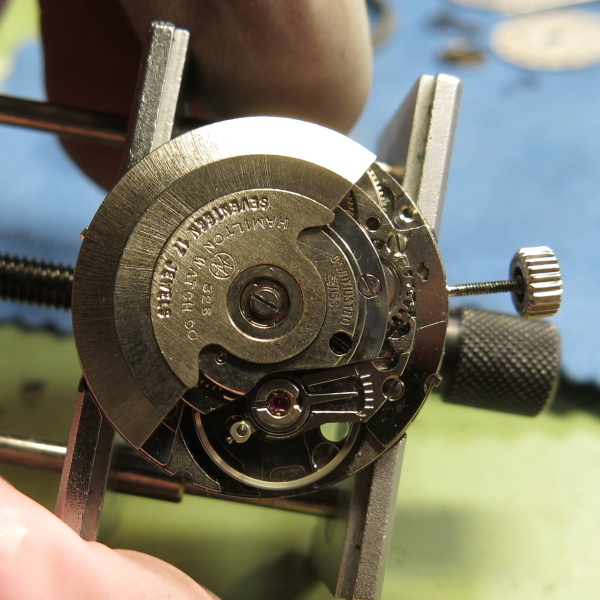 Now comes the fun part, putting all the bits and pieces onto the front of the main plate and making sure the day and date will function properly.  At this stage the calendar parts are in place.  Now I need to install the day parts before reinstalling the dial. The last two parts to go on are spacers that go around the perimeter of the main plate.  These support the dial once it's installed and keep it from rubbing the day and date wheels. 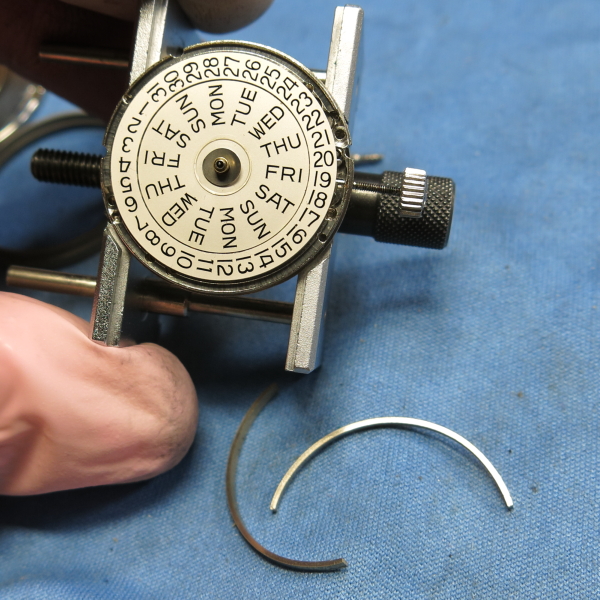 The only trick to installing the spacers is to make sure you don't block the two holes for the dial feet, near the 21 and 6. 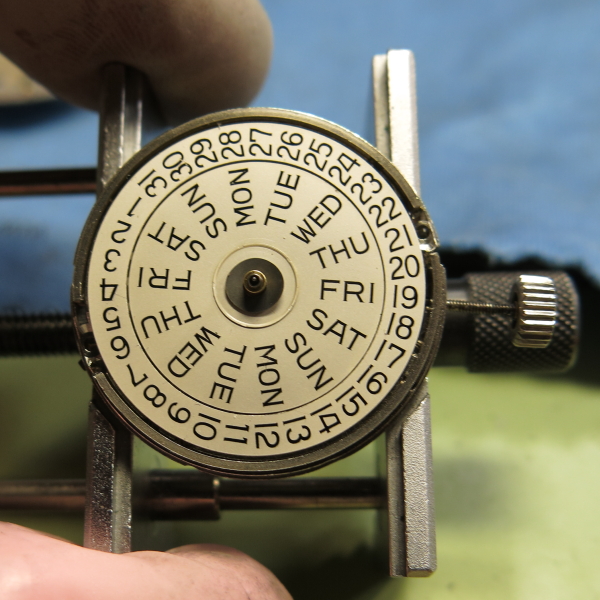 I'll break out my case clamp set and try to find something that will fit and hold the movement inside the case. 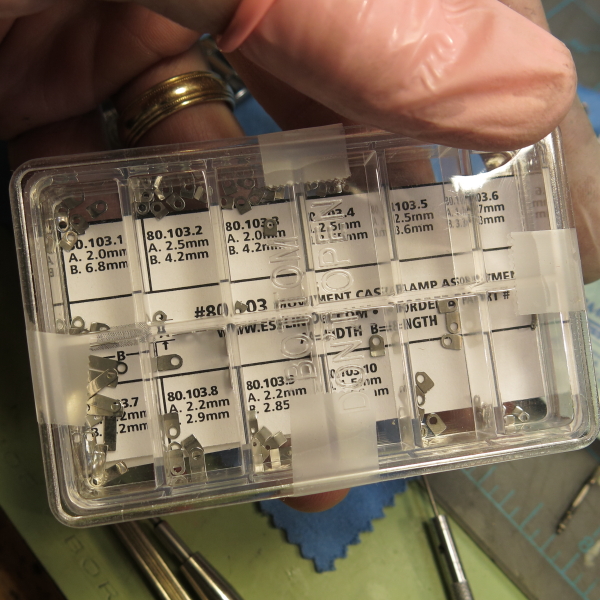 Voila... the watch is reassembled and running great.  I brushed the case and bracelet in an attempt to restore the original finish of the stainless steel.  I think it looks a lot less beat up but it's not factory fresh by any stretch.  It's definitely better than what I started with, thats for sure. 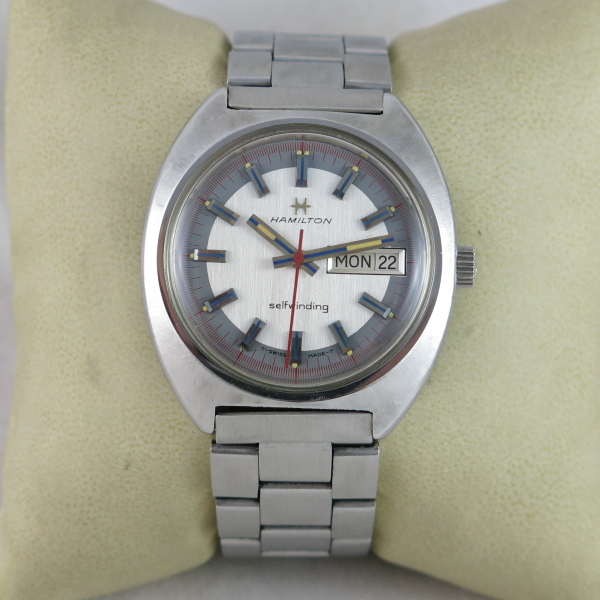