Imitation is the sincerest form of flattery, isn't that the saying?  Well, I guess when it comes to high end watches, imitation can also lead to intrigue and rumors.

In 1938 Hamilton introduced a model called the Otis.  It was produced into 1941, although only shown in the 1938 through 1940 catalogs.  It was arguably one of the most unique models of all time, as the case was "reversible" and allowed the wearer to flip the watch over to protect the glass crystal while still wearing the watch. 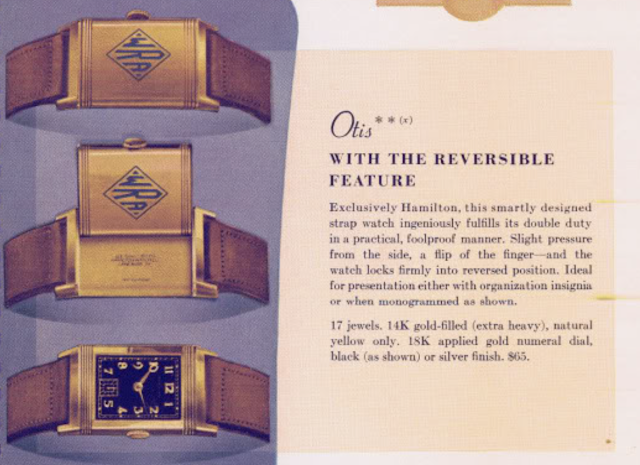 For many, many years collectors believed Hamilton was sued for patent infringement because of the Otis, thus resulting in the demise of the model in 1941.  The design is very similar to the Jaeger LeCoultre Reverso, also produced in the 1930's.  In fact, you can still purchase a new JLC Reverso today!  Did Hamilton get caught stealing another company's designs?  (no)

If you notice in the 1938 catalog, two caveats are mentioned by ** and (x).  Those mention the US Patent for the watch and that it's not available for export.

It turns out, thanks in large part to Mark Cardelucci at www.vintagehamilton.com, that LeCoultre granted Hamilton a license to manufacture and sell watches in a reversible case, in accordance with the US patent, in exchange for a 60 cent royalty to be paid to LeCoultre on every watch sold in the US.   The Otis ceased to be made simply because of the outbreak of WWII, just like many other models manufactured at the time.

Originally the Otis was outfitted with a 17 jewel 980 movement.  That was the norm for gold filled models using a 14/0 sized movement.

In 1940 the Otis was outfitted with a 19 jewel 982 movement.  That was the new norm introduced when the 982M was created for solid gold models and the 982 was used for 14K gold filled watches. 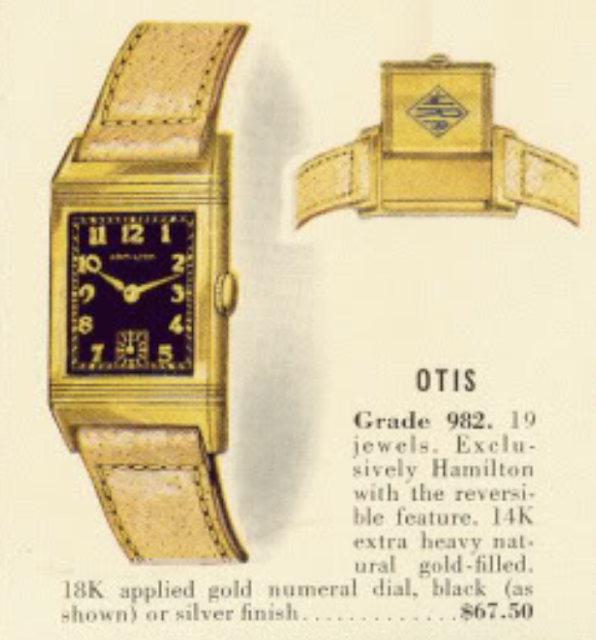 So you will find Otis watches in the wild with both the 982 and the 980 movements, depending on the year it was produced.

As for other features of the Otis, it was available with either a black finished dial or a silver butler finished dial.  The back of the reversible case was intended to be engraved with a personalization but there are plenty of examples where the back in unengraved.  Which is preferable?  Beauty is in the eye of the beholder and some people prefer unengraved while others prefer a nicely engraved example.  Regardless, an Otis will always command a premium and sell well into the thousands of dollars today.

I recently came into possession of an Otis and I took a little bit of a leap of faith with it.  When it comes to a watch with a moveable case, it's hard to say what shape it is in without actually holding it in your hands.  However, as received it turned out to be pretty much what I was expecting... beat up, extremely dirty, and functional. 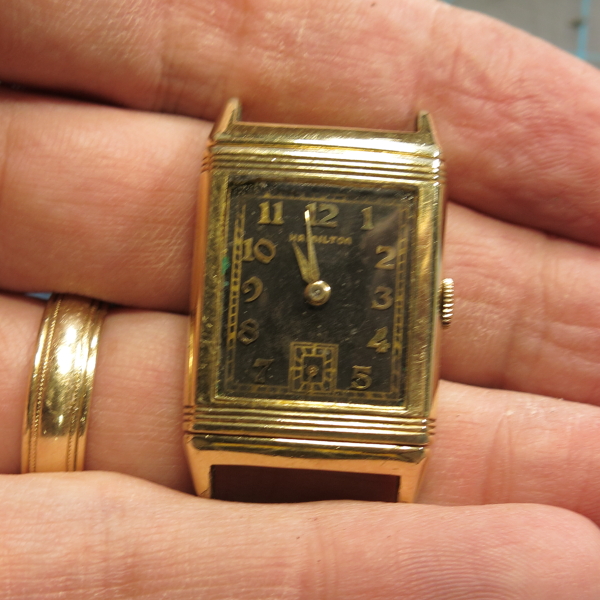 From the looks of the front and back you would not expect the Otis to have any other unique properties.  It looks like your normal, garden variety, gold filled Hamilton of the 1930's. 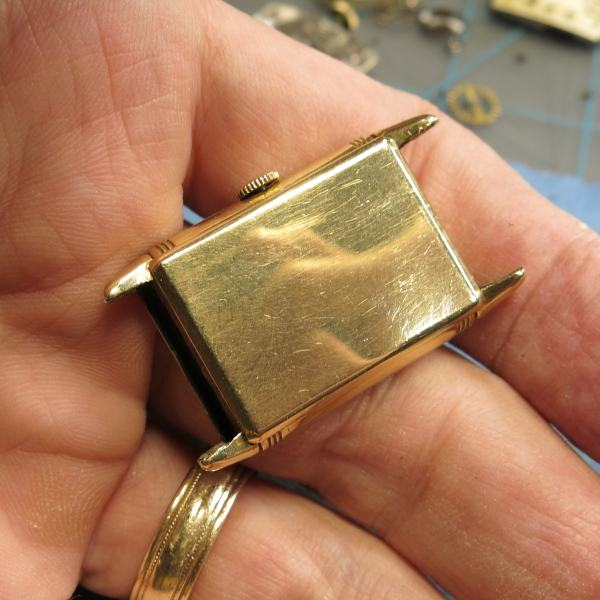 However, with a little force you can slide the case to the side and once it's fully slid outward you can flip it over. 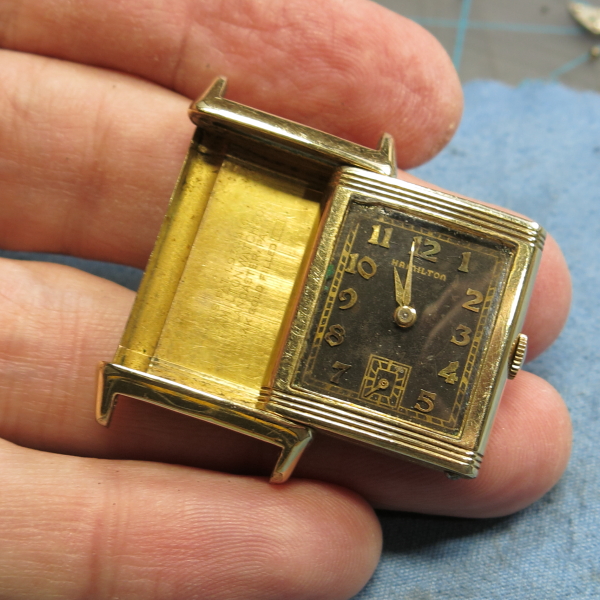 Voila!  The watch is now closed up tight and reveals that this watch was presented to the president of the Advertising Club of Los Angeles in 1941. 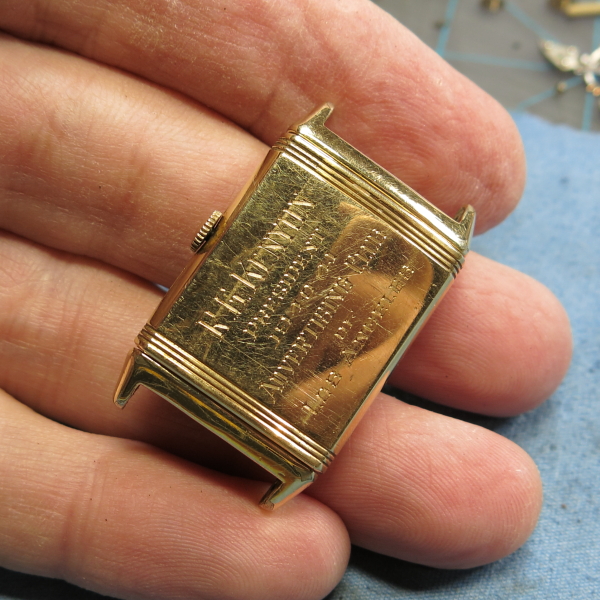 The careful application of a case knife separates the back from the bezel.  Inside you can see two steel springs that work as the hinge as well as the detent to hold the assembly in position. 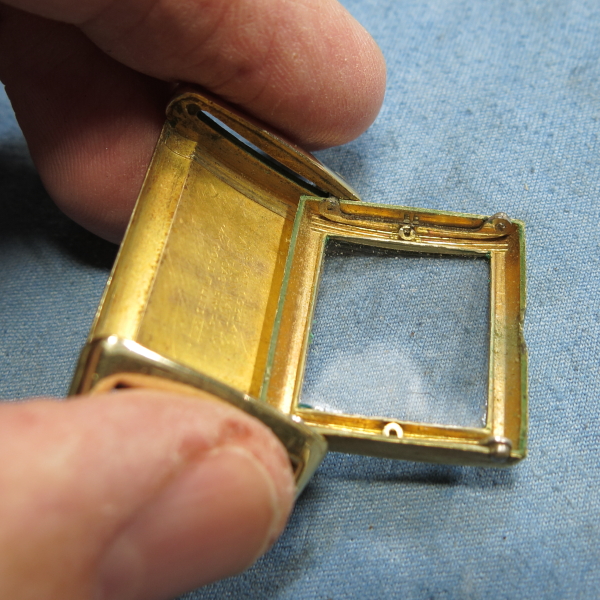 Wow, this in one dirty watch.  I think I could probably send the residue in my cleaning solution to 23 and me and get the DNA of the original owner identified. 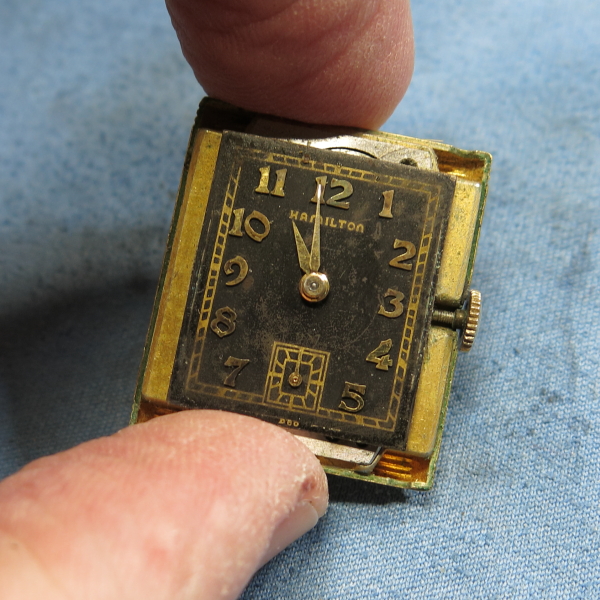 Although it's super dirty, the movement is in otherwise fine condition. 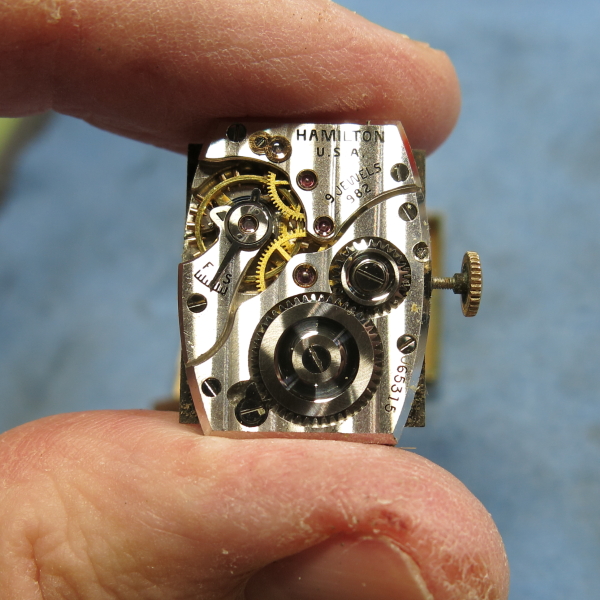 The inside of the case back has a plethora of watchmaker's marks inside indicating that this watch was well maintained, at least for the first few decades of life, 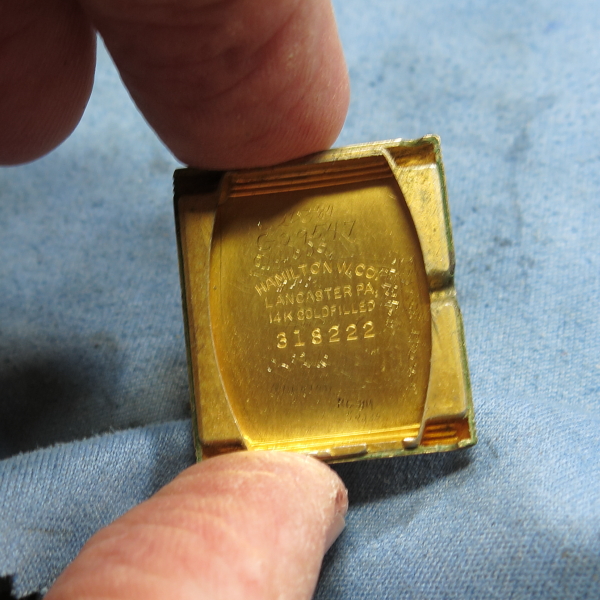 This dial is a candidate for refinishing in my opinion.  Its very dirty and if I try to clean it I'll probably find that it looks worse.  At the same time, it looks pretty grungy as is.  I can tell by the D60 at the bottom of the dial that this is the original dial. 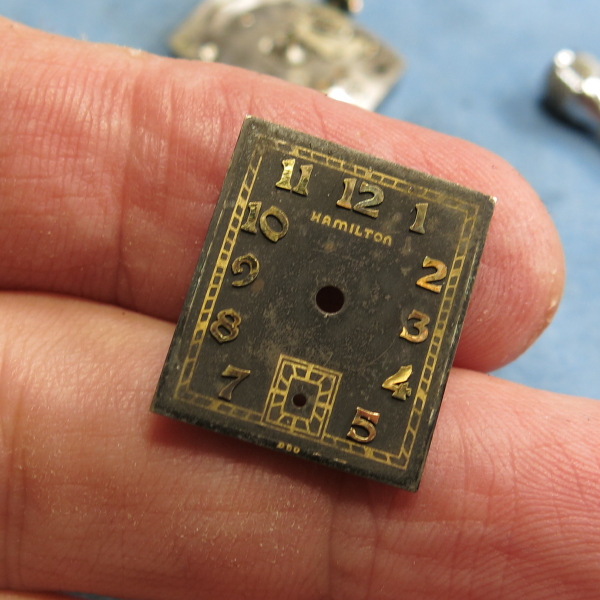 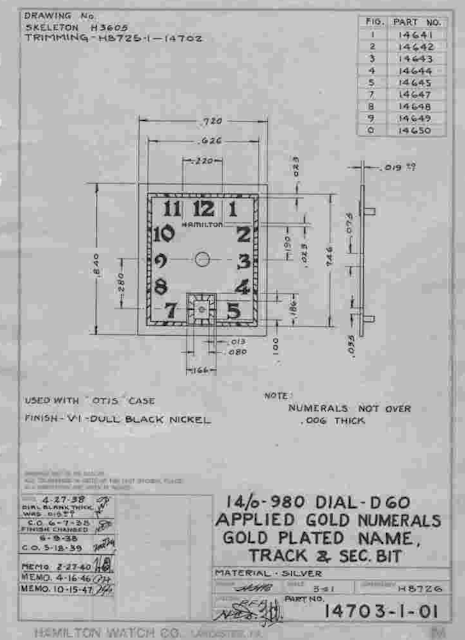 Taking the movement apart, as expected, the mainspring inside is an old blue steel example.  There is a 99% chance that it's "set" and will need to be replaced. 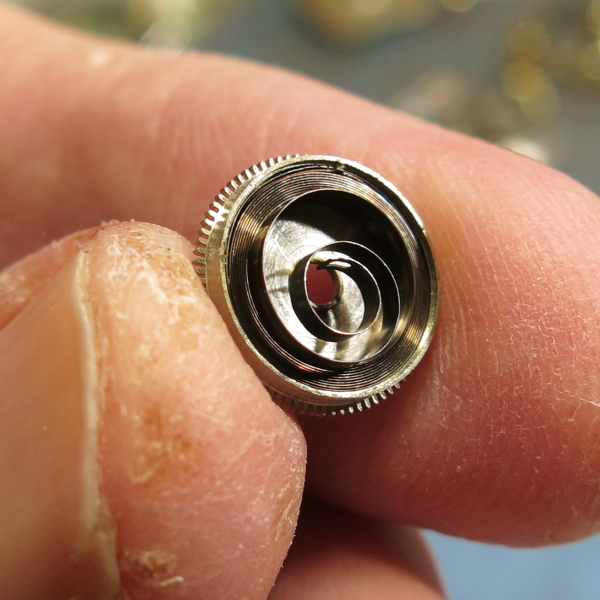 No surprise here, this spring lacks most of its original energy and would probably only power the watch for a few hours.  A fresh Dynavar spring will give the watch upwards of a 40 hour power reserve. 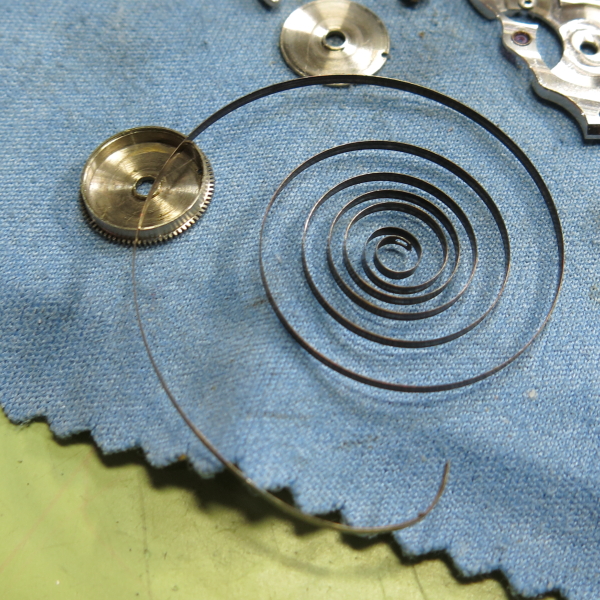 While all the parts are in the cleaner I will see what I can do with the dial.  My first pass seemed to make matters worse. 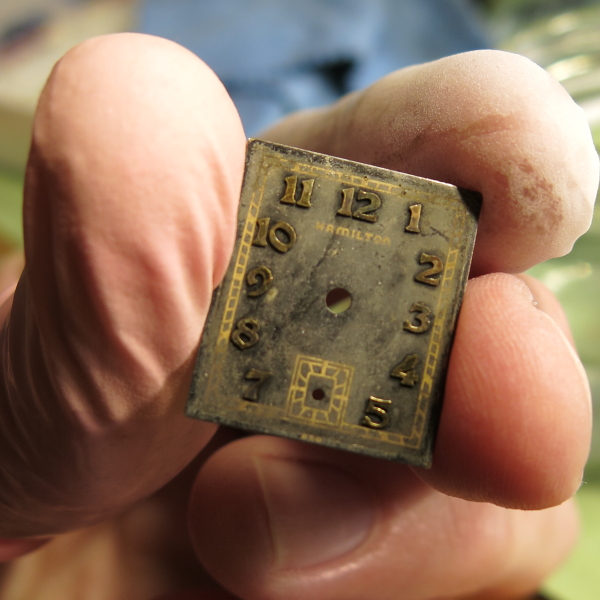 However, the dial looks better when it's wet than when it's dry.  So maybe if I give it a light spritz of clear lacquer it won't look too bad.  I call this the "poor man's refinish" and it will often turn out great. 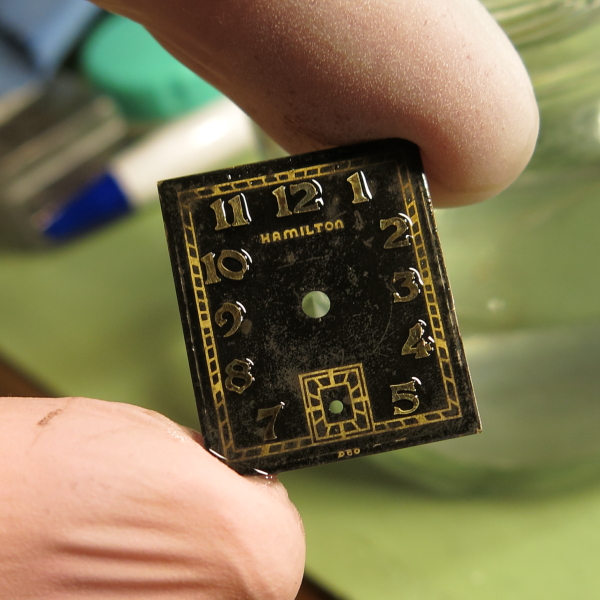 Everything gets cleaned and dried.  Now it's time to put it back together again. 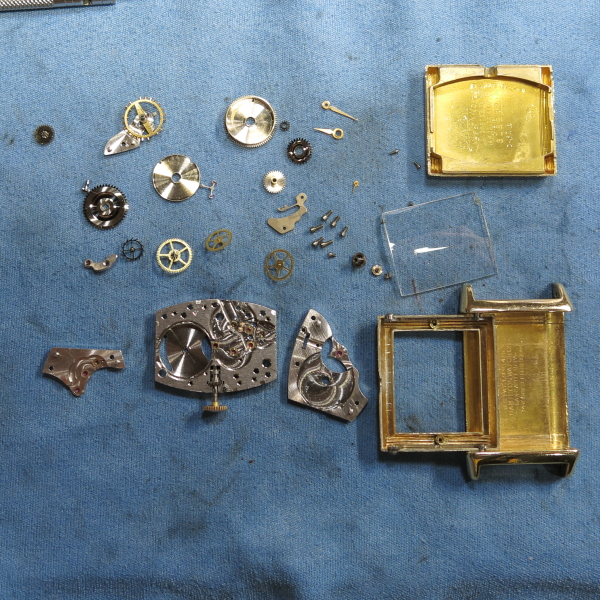 When I went to install the balance I noticed the impulse jewel was off to the side a smidgen.  I suspect the beat error will be a little high.  The watch is ticking away with good motion though so that's a good sign.  Only a watch timer will be able to really say what's going on. 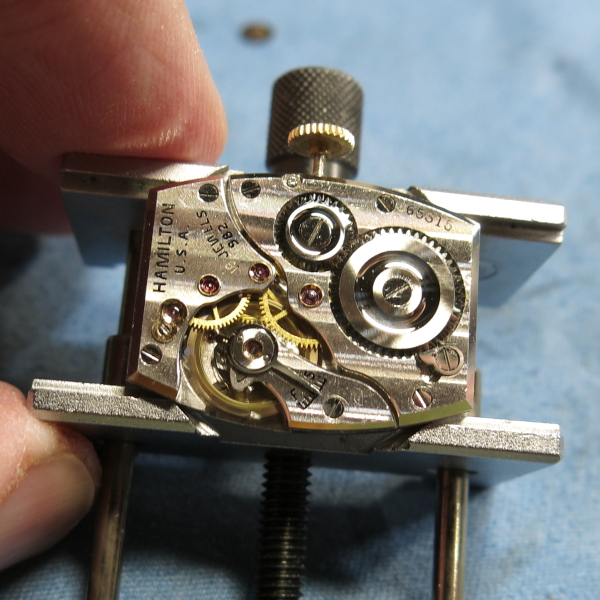 It's running a little fast with great amplitude but the beat error is over my 3.0ms upper spec.  I think I know what direction to adjust the hairspring, now I just need to move it the right amount. 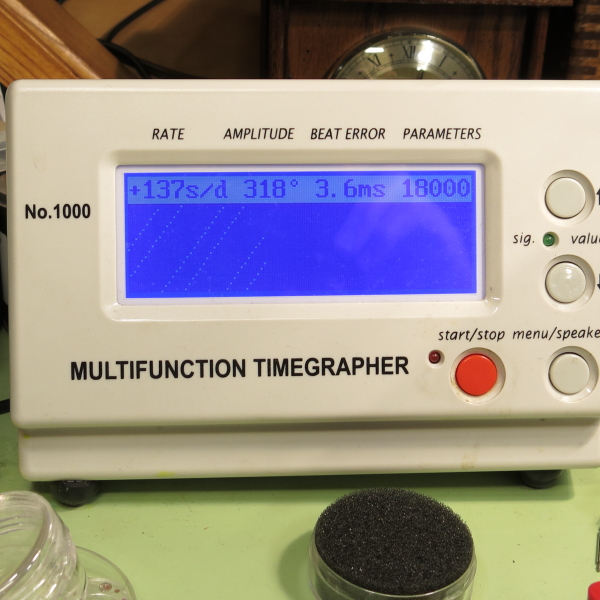 Ah, 0.6ms is much better.  Now I can tweak the regulator and slow the watch down. 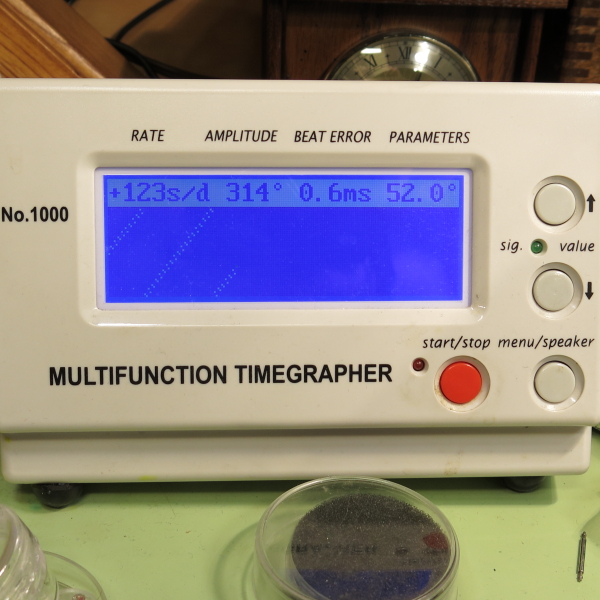 There... 17 seconds fast per day will be fine.  It will slow a little as everything settles back into place. 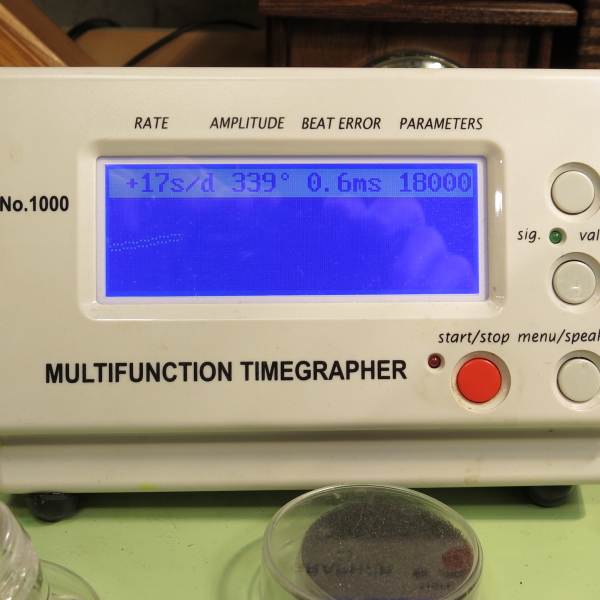 My poor man's finish turned out okay, not great but not terrible.  The crystal has a chipped corner and a couple of dings so I'll add that to my list of things to track down. 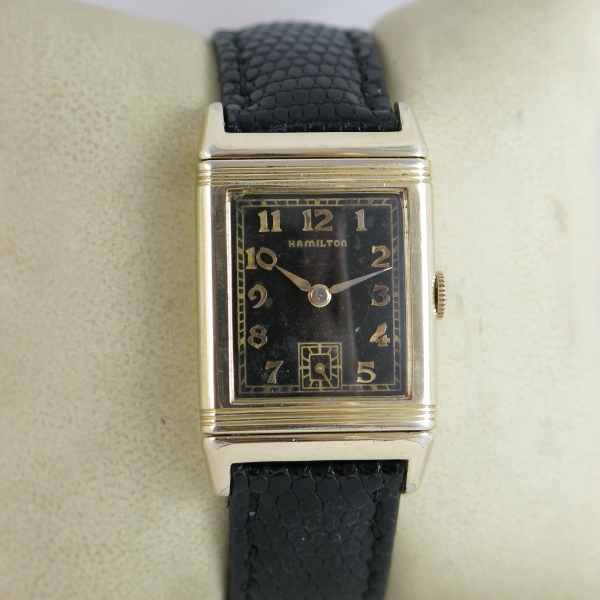 This is such and interesting watch!  The movability of the case is oddly satisfying, like flipping a Gerber multitool.  The case is nicely cleaned of any past grunge and only a hint of wear through is visible to the high points of the lugs. 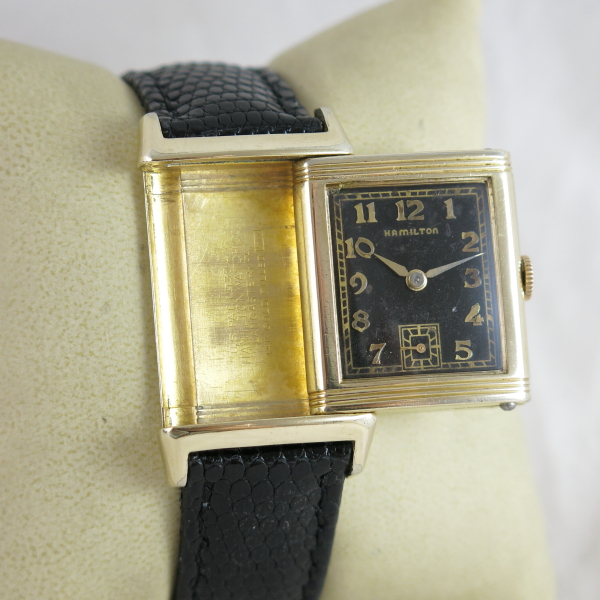 The back (or is it still the front) of the watch is just as attractive as the dial-side.  Personally I prefer engraved examples.  The unengraved versions look too plain and uninteresting to my eye. 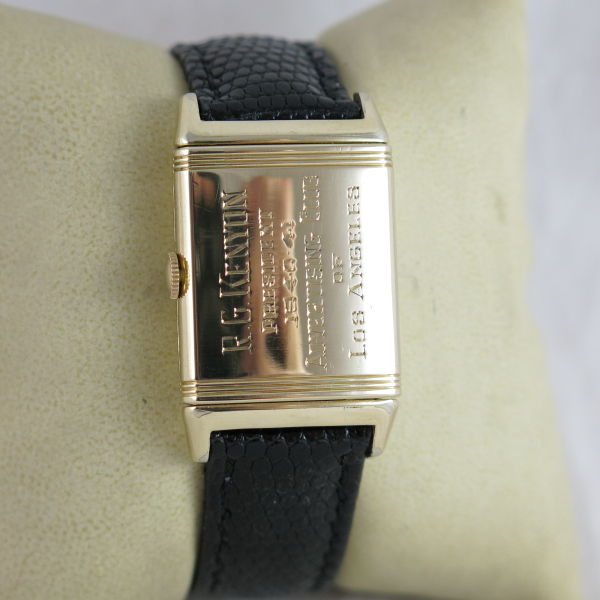 I found the following in the Highland Park Post-Dispatch, Volume XI, Number 42, 2 July 1942

And here's a picture of him sitting at his desk!  It's from 1938 so he's not wearing this watch. 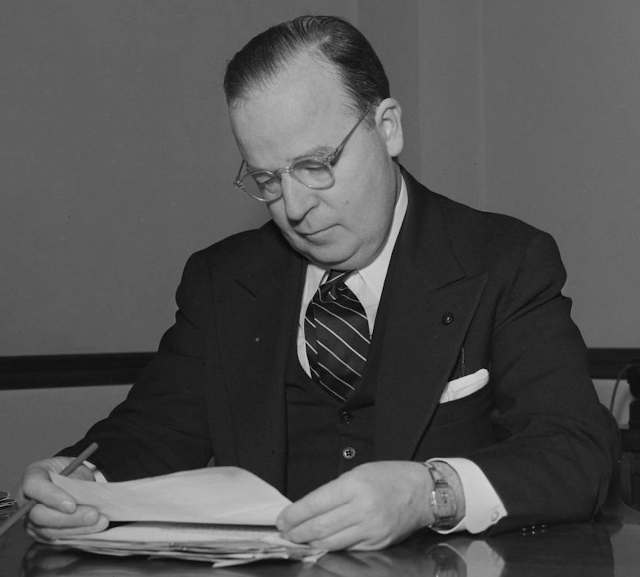