There's a great Hamilton Watch Company video from the late 1940's called "What Makes a Fine Watch Fine".  It begs the question, if the most basic Hamilton watch is a fine watch, then what makes an exceptional watch exceptional?


There is one series of Hamilton models that arguably fits the label of exceptional - or at least the best that they had to offer in 1957 - the Astramatic line.  There are only two Astramatic models, the Astramatic I and the Astramatic II.  Both models are one-year-wonders though, so you'll be hard pressed to find either of them.  They are the only models to utilize the 25 jewel 664 movement.

Of the two, the Astramatic I is the cat-daddy and arguably the flagship of the entire 1957 model line. 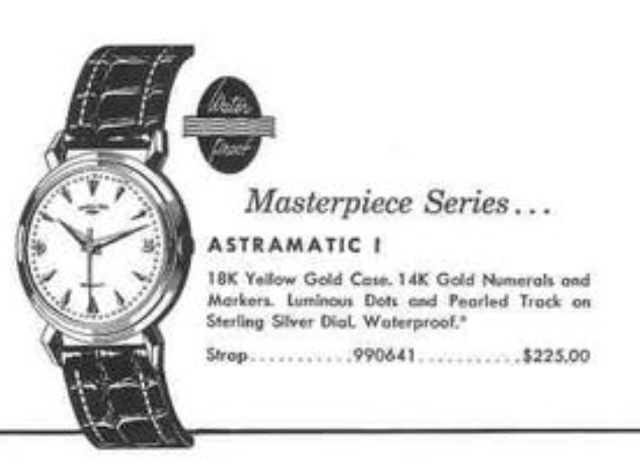 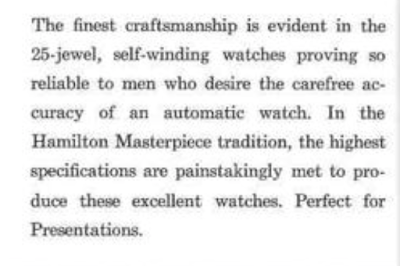 There are only about a baker's dozen solid 18K models and the Astramatic I is a member of this elite collection.

I recently had the opportunity to work on an Astramatic I.  It's only the second time I've come across one, so it was a real treat to restore it.  As received it was in typical "as-found" condition with a few bumps and bruises and a slightly cloudy crystal. 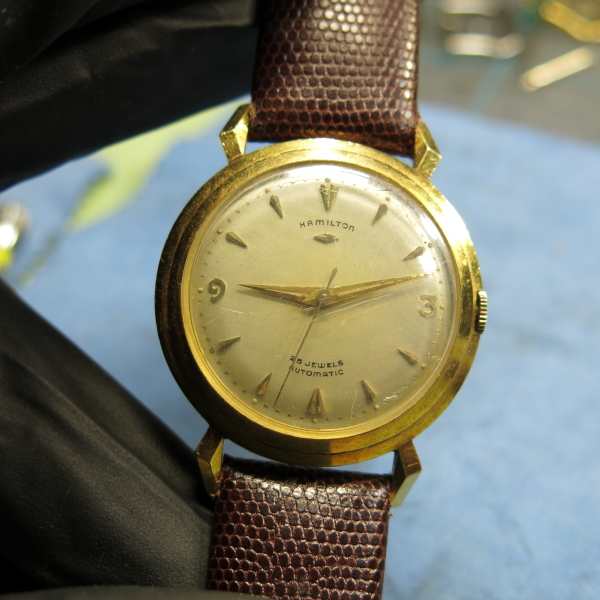 The solid 18K case back is on tight!  18K is fairly soft, as metals go, so I'll have to be very careful not to gouge up the case back by trying to open it. 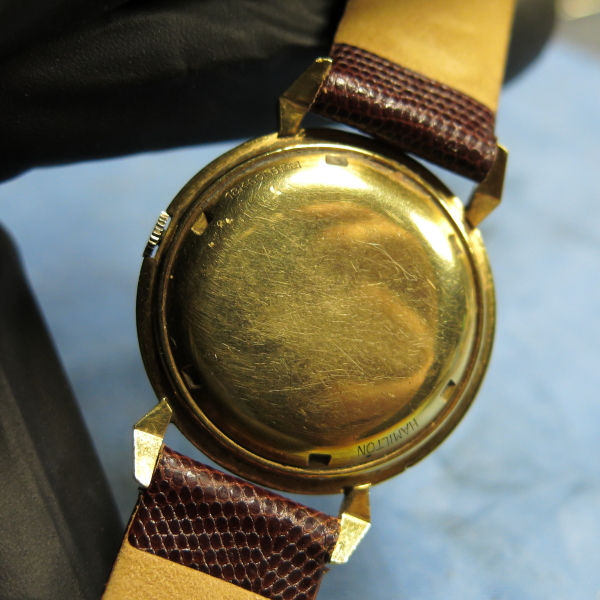 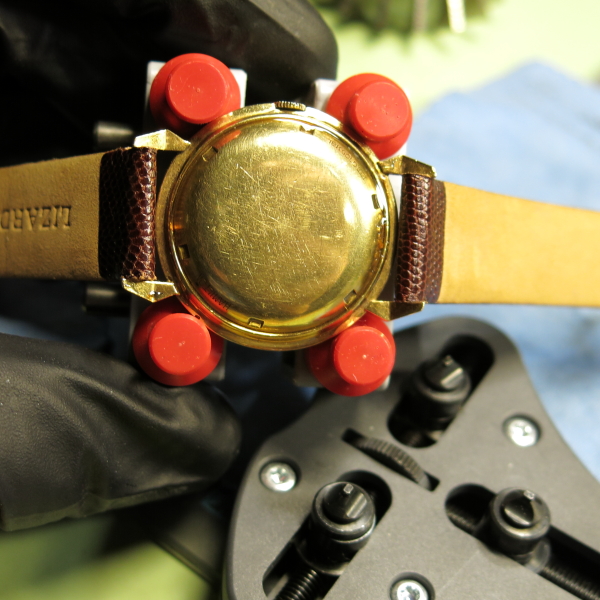 A little penetrating oil helps free up the couple of decades of dried DNA holding the case back in place.  Finally it broke loose without any damage. 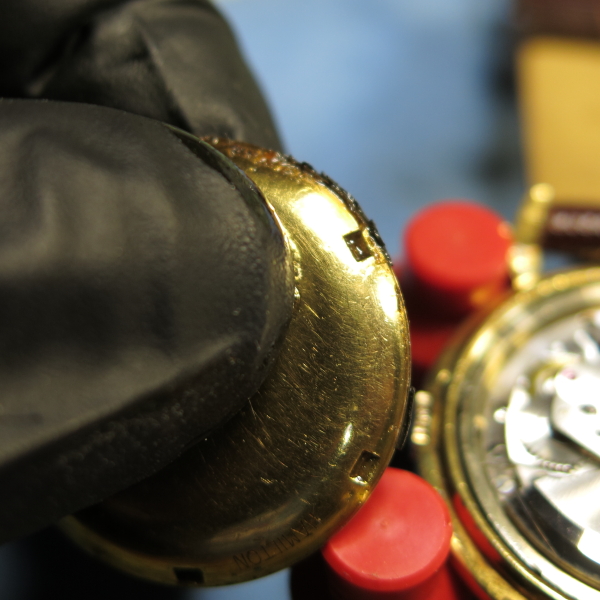 I don't see any evidence of prior watchmakers inside the case back... I wonder if I'm the first person to look at the movement in over 60 years? 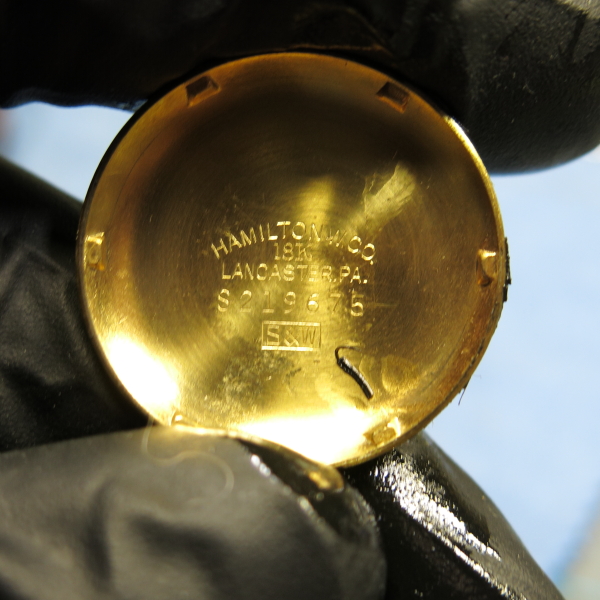 The 25 jewel 664 movement is essentially the same as the 661 movement used in the Automatic K-series of models, except there are 8 additional jewels inside.  Although this is a very rare movement, it's not hard to find parts for it since there are lots of 661s out there. 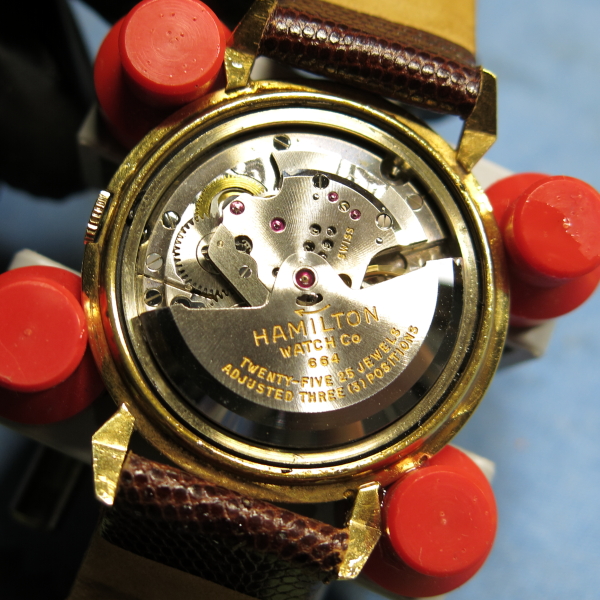 Despite the radium-based lume on the hands, the dial only shows a slight amount of radium burn on the surface. 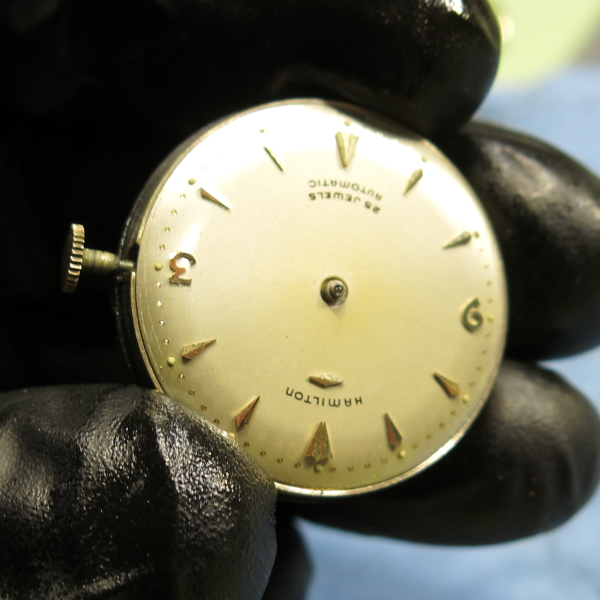 If you look closely at the automatic framework you will see four jewels that you won't see on the framework of a 661 movement. 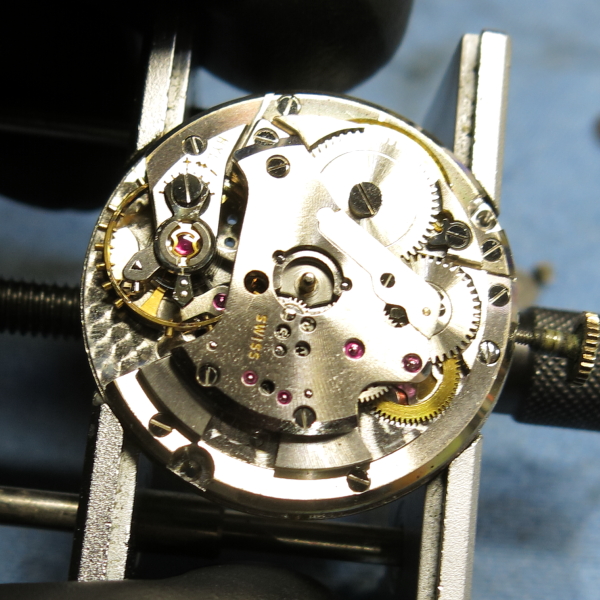 There are four additional corresponding jewels below the framework, bringing the total jewel count to 25. 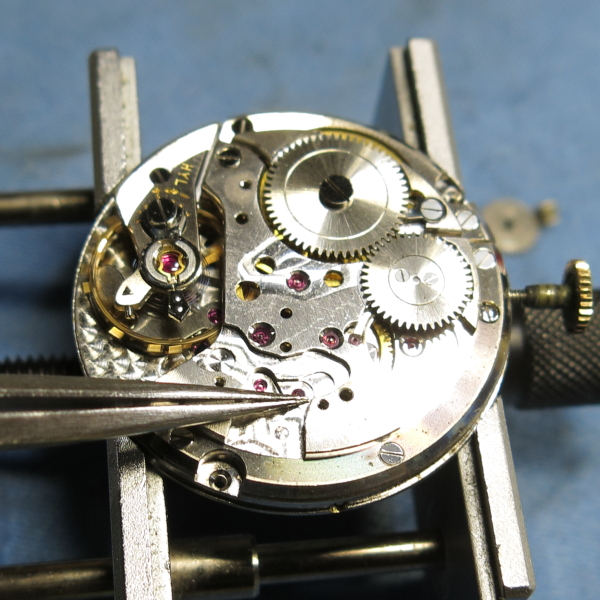 The movement is completely disassembled and ultrasonically cleaned.  While it was in the ultrasonic I replaced the crystal with a fresh one... that alone will make a nice improvement. 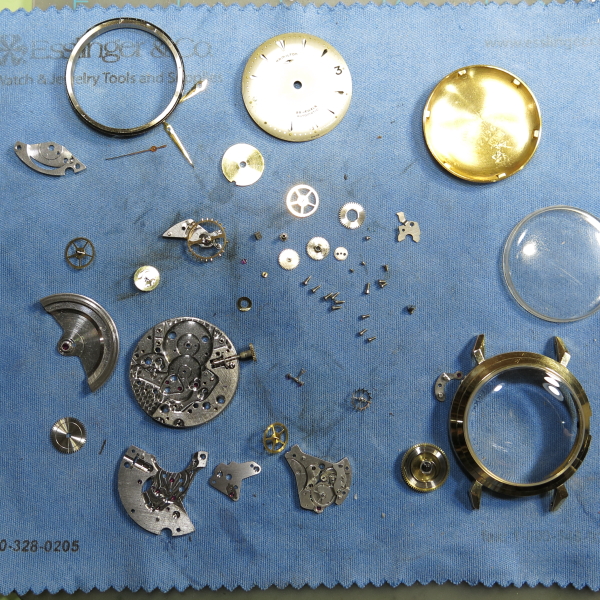 The basic movement is reassembled with fresh oil and now ticking away with good motion. 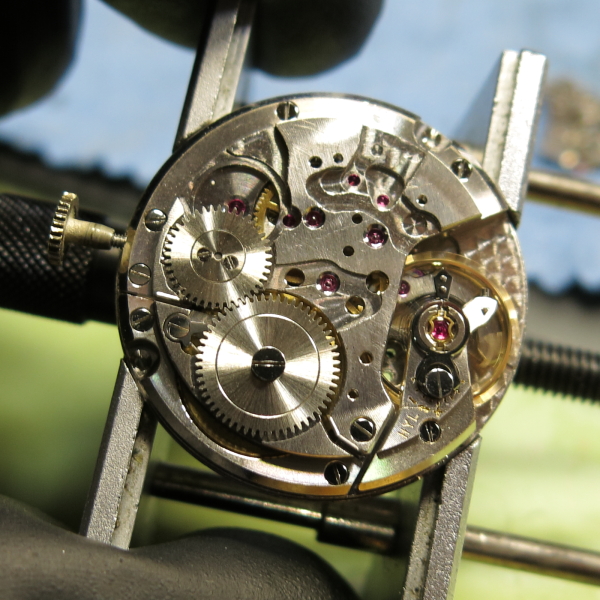 It's running a smidgen fast but a slight tweak will slow it down. 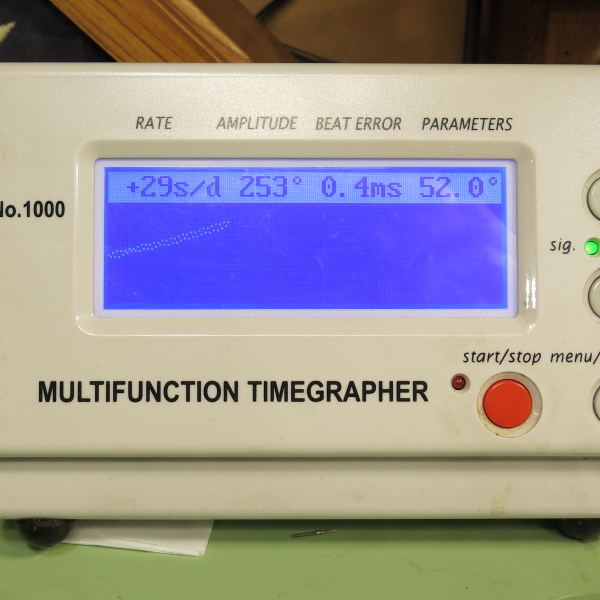 There... 13 seconds per day fast is a good place to leave things.  It will slow a little after everything settles back in place. 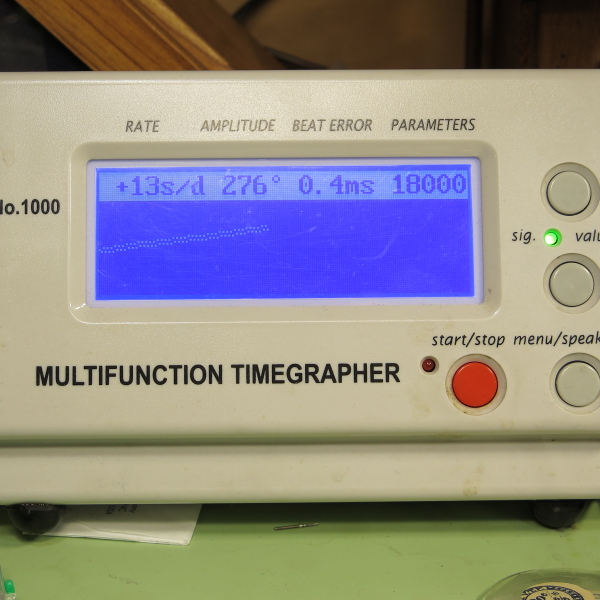 The reassembly of the movement is completed and everything is installed back in the case. 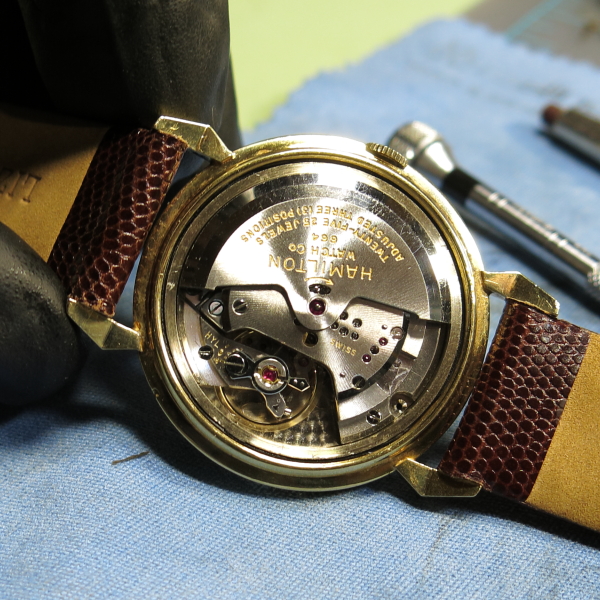 I cleaned the case up and gave it a very gentle polish so that I wouldn't lose any of the crisp edges.  There are still a few marks from prior wear but that's preferable to an over-polished case with soft edges.  A new crystal makes this 63 year old watch look like it just left the showroom floor.  I'm sure the owner will be delighted to get it back on their wrist!  However, I believe this watch will be for sale so if you're interested in it let me know and I'll put you two in touch! 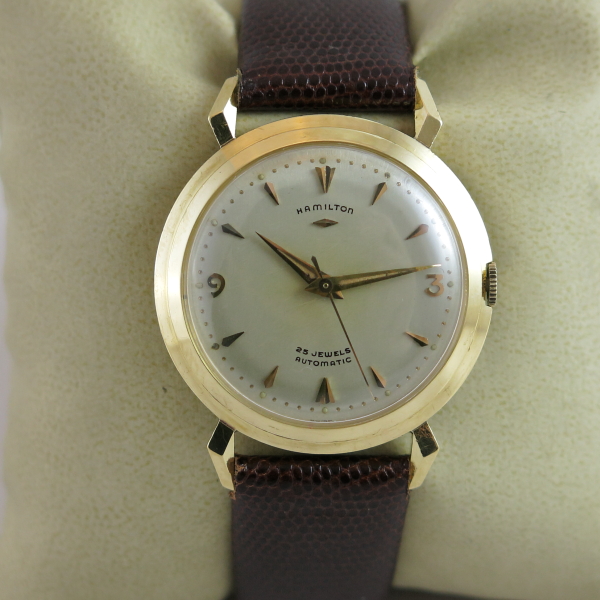