In 1969 Hamilton produced a fairly well known but uncatalogued model called the Liberty Coin.  It was produced after production of movements in the US came to an end.  Hamilton had an abundance of left over stock and they created a very unusual and rare model in both solid 14K gold and 10K RGP.

If you look closely at the watch, you may note a couple of interesting attributes.  First, there's no second hand and, in addition, it says "22 jewels" on the dial.  Both are very unusual for Lancaster-made models. 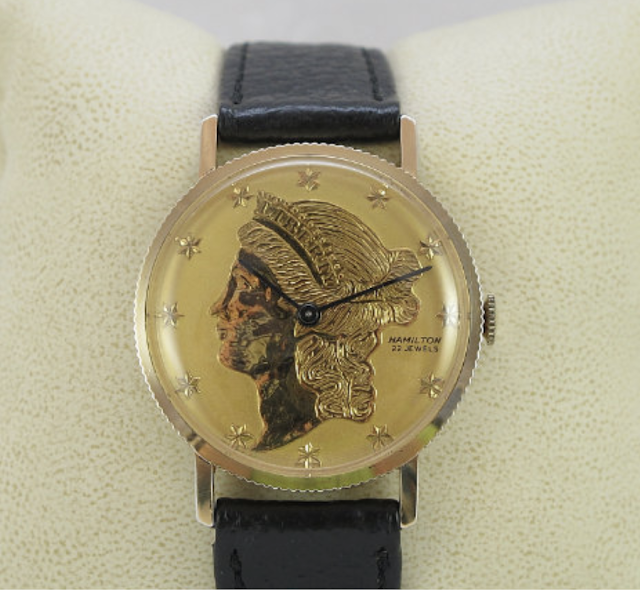 I have noticed other models with "18 Jewels" written on the dial and I suspect they were also created at the end of the 1960s using excess 736 movements.  I posted on one in the past that I've seen in yellow as well as white RGP with diamonds on the dial.  This particular model has a Hamilton branded case on the outside but it's rather crudely made, by Hamilton standards anyway. 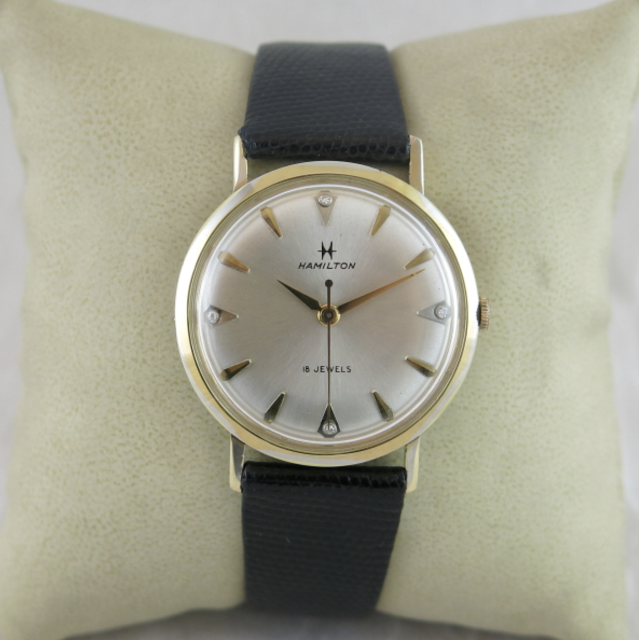 No I've had the opportunity to see another 1969 mystery model, this time in solid 14K.  It also has 18 jewels written on the dial. 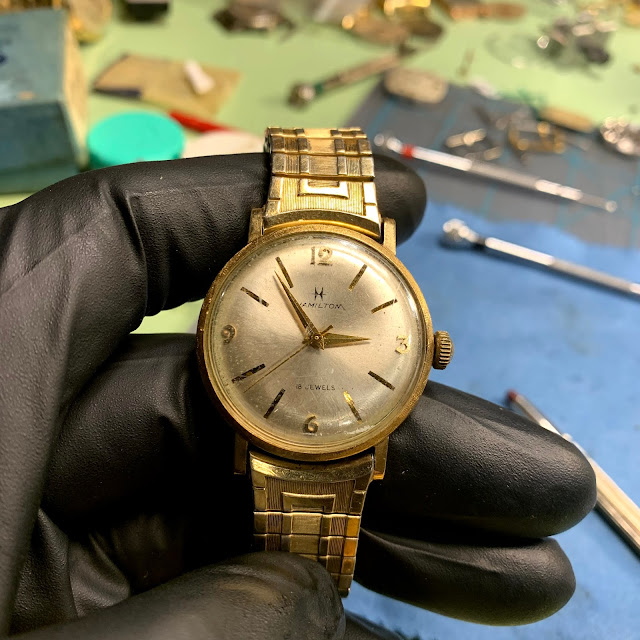 The back of my project watch has 14K Hamilton stamped on the back.  The crown is a bit worn and a little too large, in my opinion, to be original. 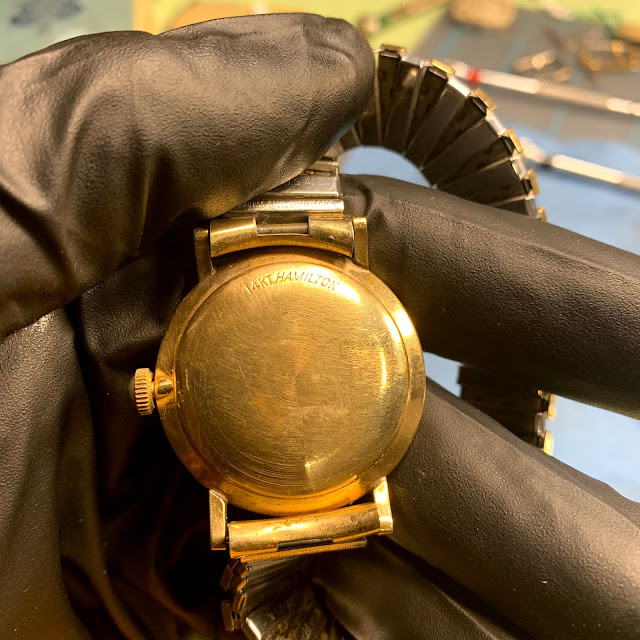 Sure enough, inside is an 18 jewel 736 movement.  This caliber was introduced in the early 1960s as a replacement to the 735 movement.  The only difference is the 736 has a glucydur balance with no timing screws. 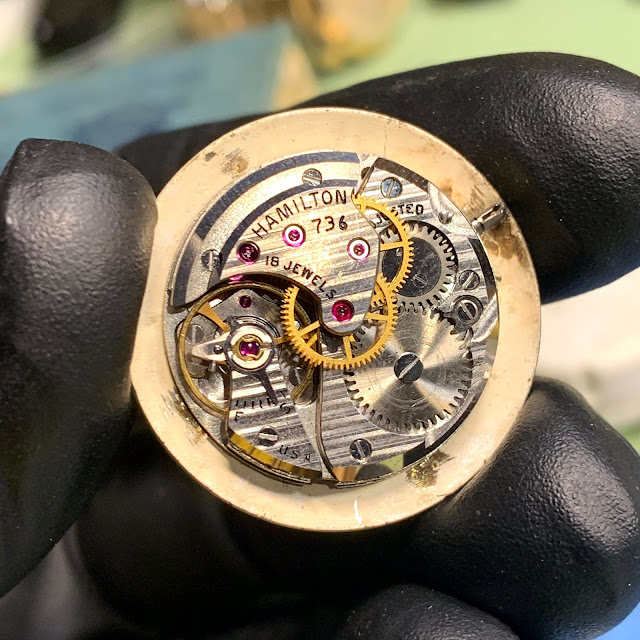 Check out the inside of this case back... talk about plane jane.  There is no Hamilton Watch Company Lancaster PA inside, just like the Liberty Coin and the other mystery models I've seen.  I think these cases were just procured to use up inventory.  There are a few past watchmakers marks inside so this watch has been worked on in the past. 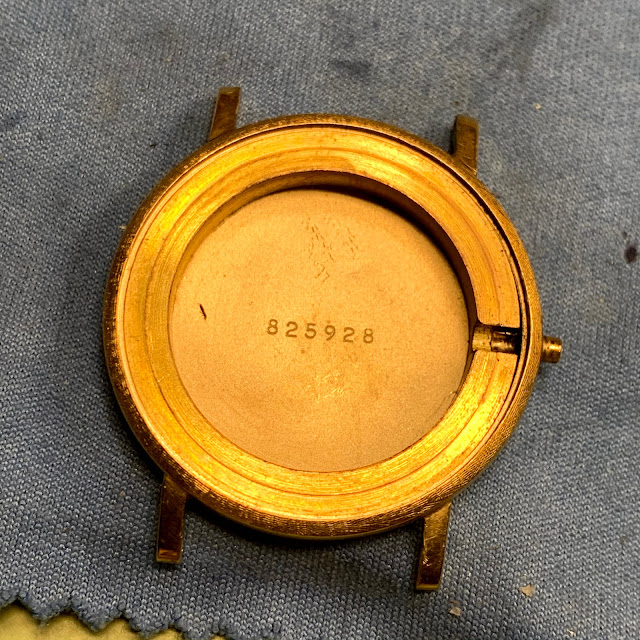 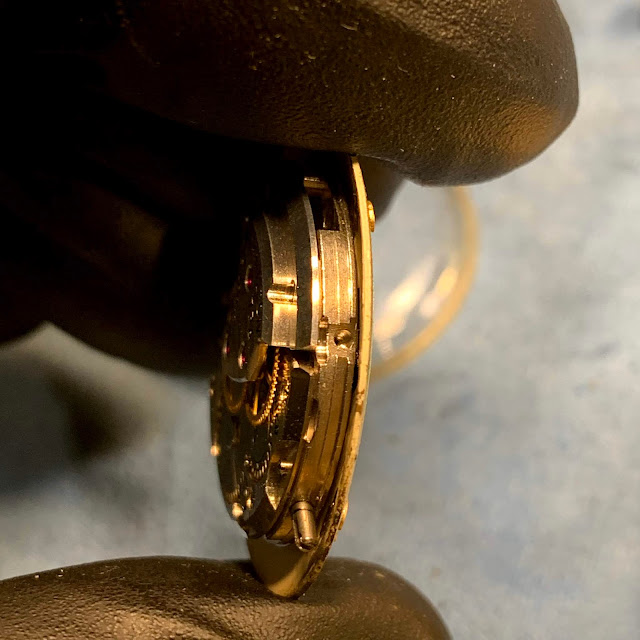 Well, I guess the missing dial foot screw is no big deal, it's missing the dial foot too! 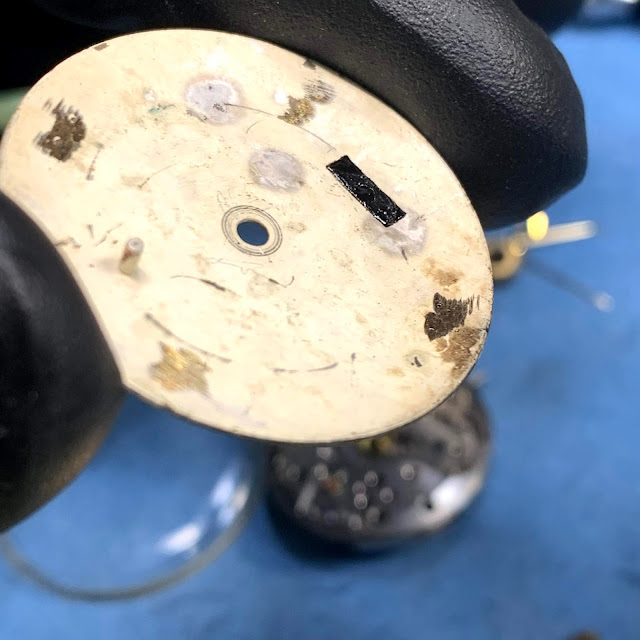 Everything is disassembled, cleaned and dried.  I also prepped a new 30.6mm crystal for it since the old one was too small and has let moisture in an corroded the dial around the circumference. 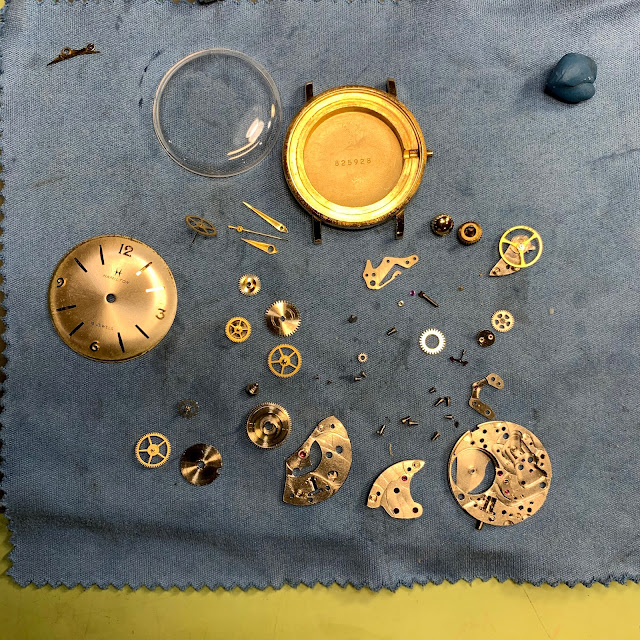 The reassembled movement is noticeably brighter and shinier now. 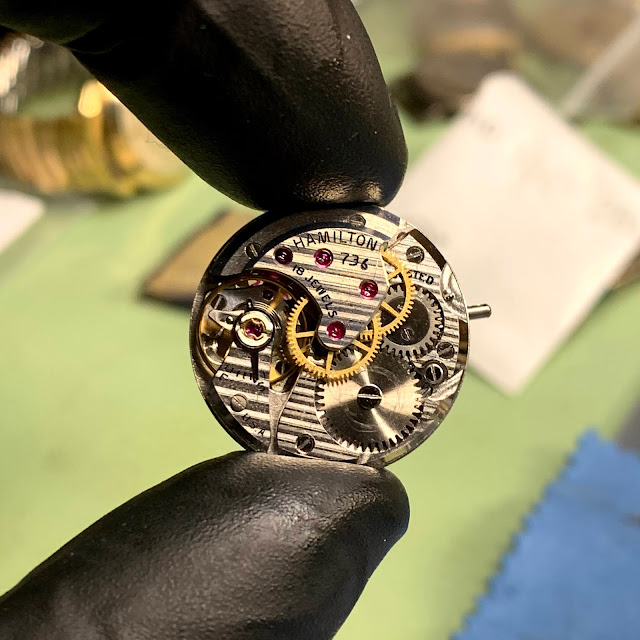 It's running a little fast.  I will tweak the regulator but it's already close to the S.  There's not much adjustment left and glucydur balances are one-trick-ponies.  They are factory-poised and not adjustable.  Still, this watch should run well within the 30 second per day factory spec. 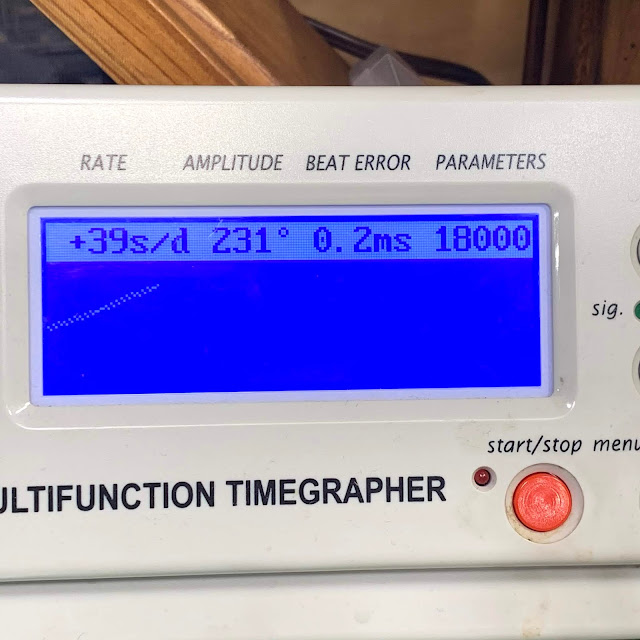 One way to hold a dial without a dial foot on is with "dial dots".  The are small double-side sticky dots.  I've also seen people use glue... don't do that, no matter how tempting.  The dial has to come back off eventually. 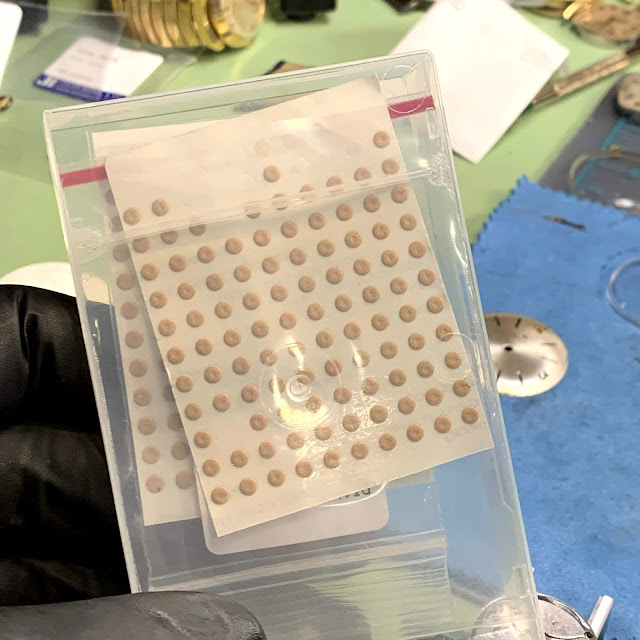 The dots go on in a couple of flat spaces that don't interfere with anything else. 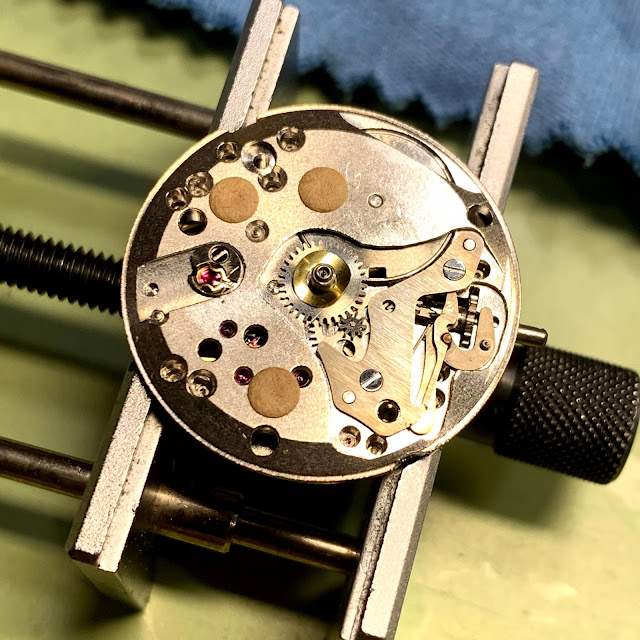 Then I carefully pry the covers off to reveal the sticky side. 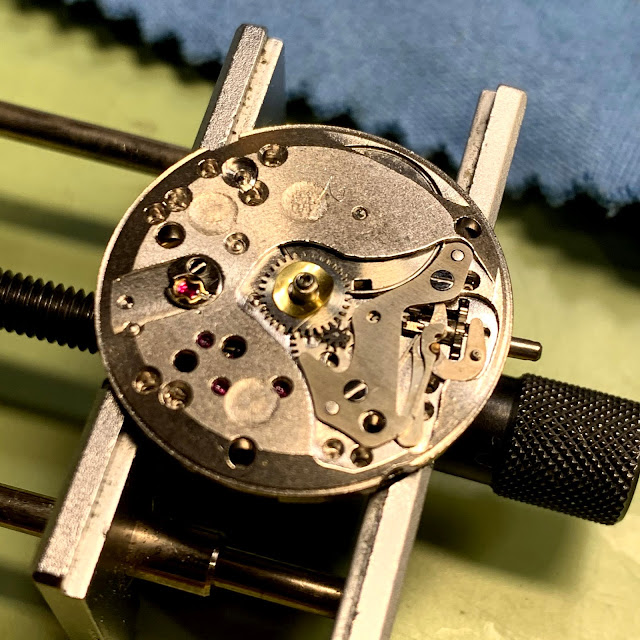 I'll replace the large and worn crown with a new, slightly smaller waterproof crown.  I will also have to trim the male hub since the old hub will be too short. 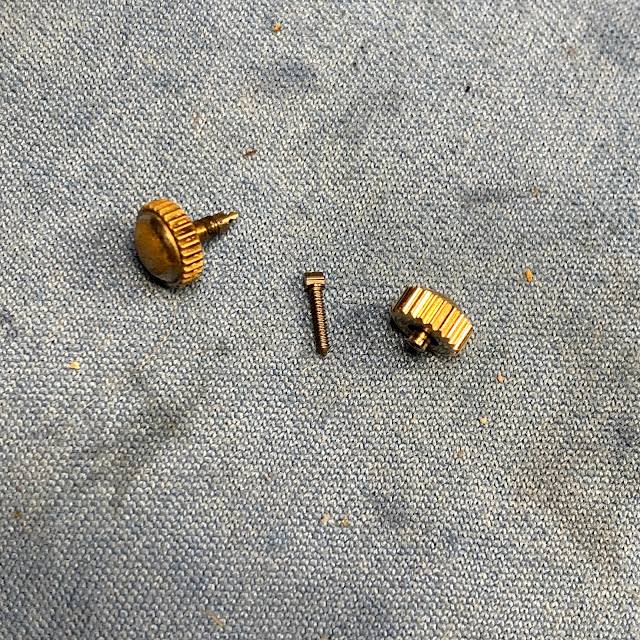 Voila!  This watch looks great now and it runs as good as it looks.  The bezel of the case is florentine finished so I made sure not to polish that off. 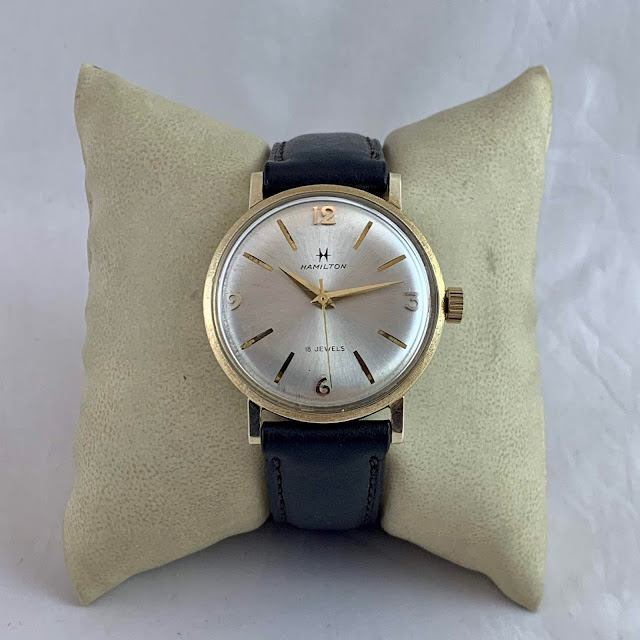 Here's another shot from my Instagram account in more flattering light.  Looks pretty good if I do say so myself.  If you don't follow me on Instagram you can check me out at @HamiltonChronicles. 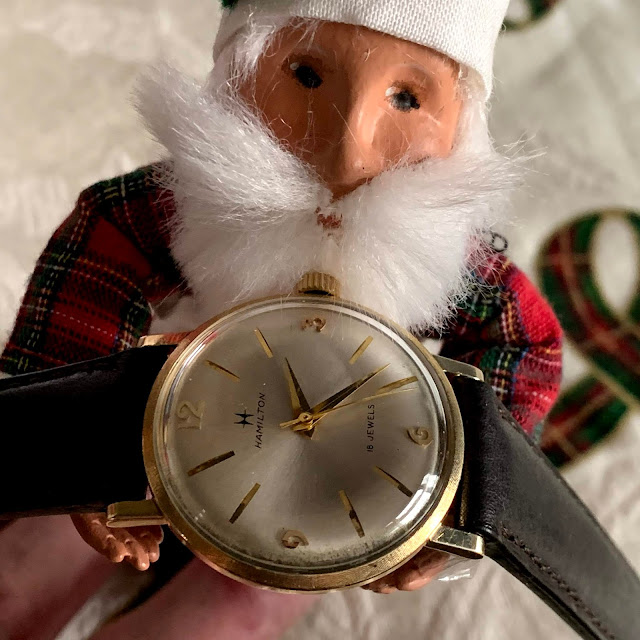