I've had a project on my to-do list for well over a year.  I've had a lot of things that have taken a higher priority, plus I've been a little apprehensive to tackle it.  Today was a good day though, it started to rain so I was able to hang out in my workshop a little bit longer than normal.

My project watch is a modern Hamilton Khaki Field Automatic Titanium.  This model has been around for a while and is still available, but with an updated H10 movement with 80 hour power reserve.  Mine is the earlier version.

As you can see, the retail price is almost $1,000 for this watch today, so this is not an inexpensive watch.

I've had my watch for several years and it's one of my go-to watches for casual wear.  It's a good size at 42mm diameter.  The case is made of titanium so it's not heavy either.   A little over a year ago I noticed it would stop and start.  It eventually didn't run at all so I set aside for a rainy day, like today.

My watch is in good shape, other than not running.  I've been a little apprehensive about servicing it because I won't have spare parts, in case something goes wrong, and buying parts for modern watches can be a challenge. 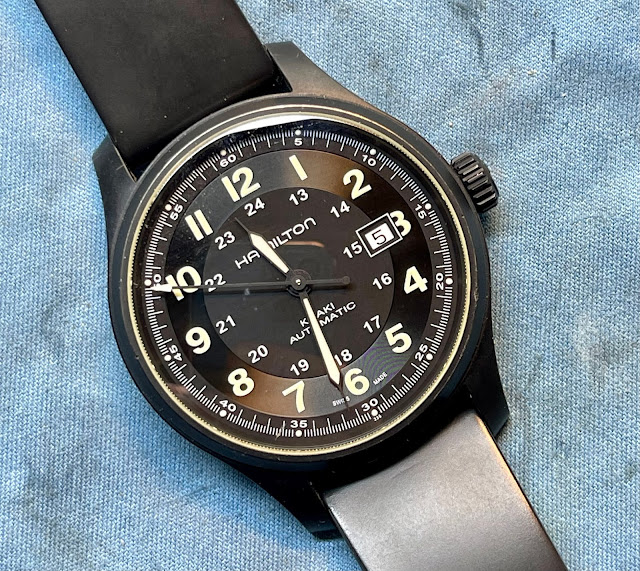 The watch opens through the back.  There are 6 screws that need to be removed.  Then the back can be lifted off. 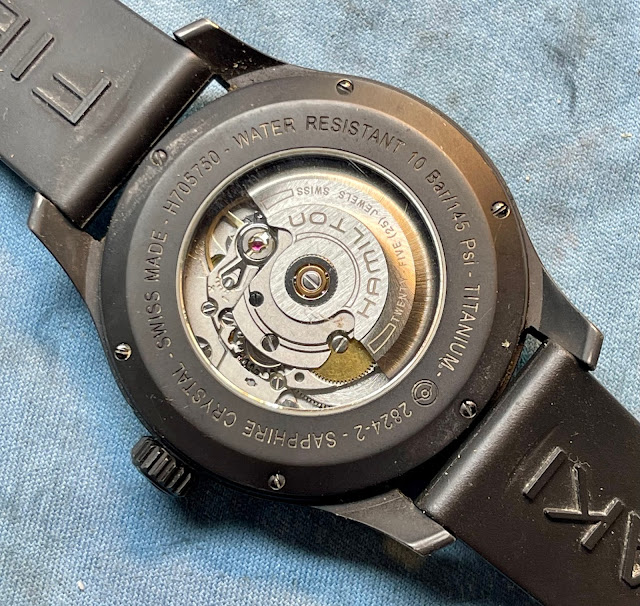 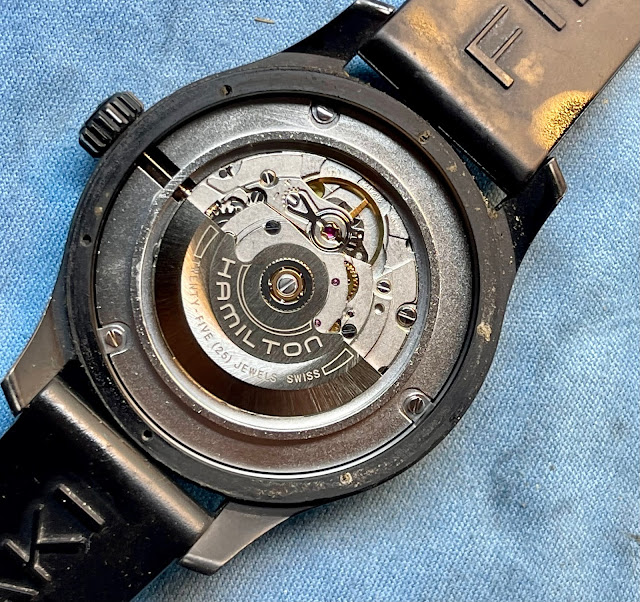 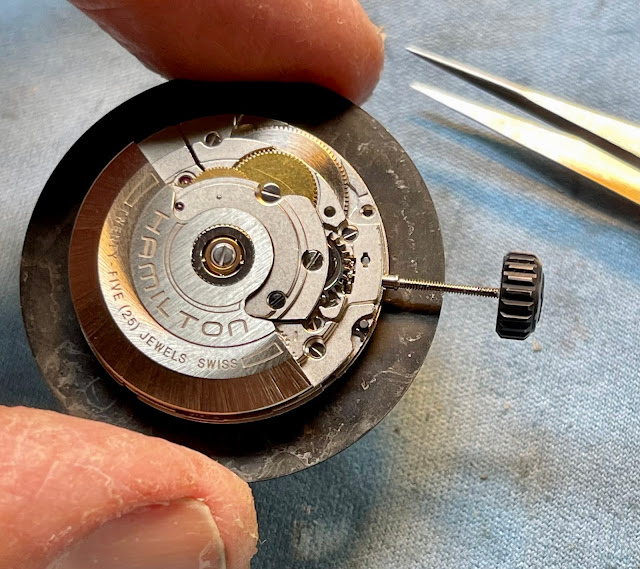 The dial is held on by two dial feet secured with clips... just slide the clips out and the dial lifts off. 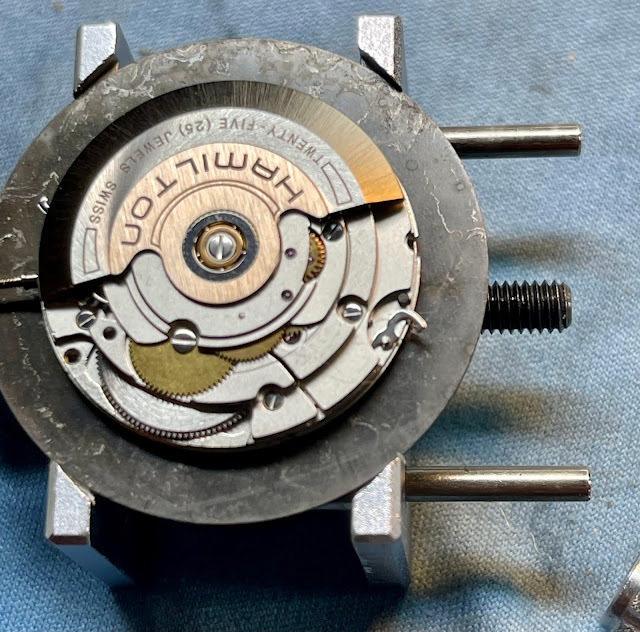 If you've seen any of my Dateline overhauls then this view will look familiar.  The best part is there are no tiny springs to lose... over the last 50 years ETA has made some nice improvements. 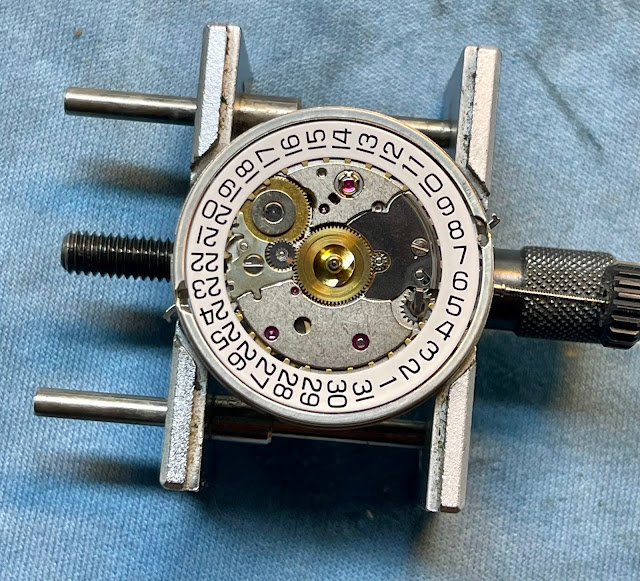 The 25 jewel movement is essentially a 17 jewel movement with several additional jewels in the automatic framework.  With the framework removed this movement looks like you basic ETA movement from the 1960s. 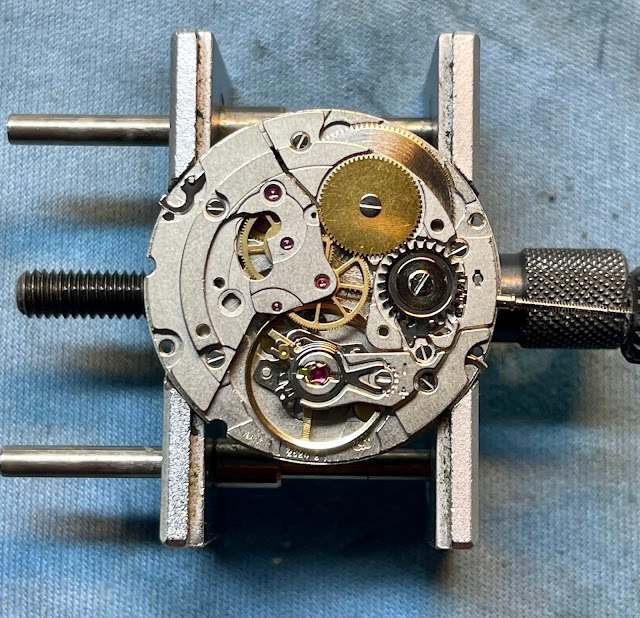 I'll strip the parts from the dial-side of the main plate and then do the same on the back. 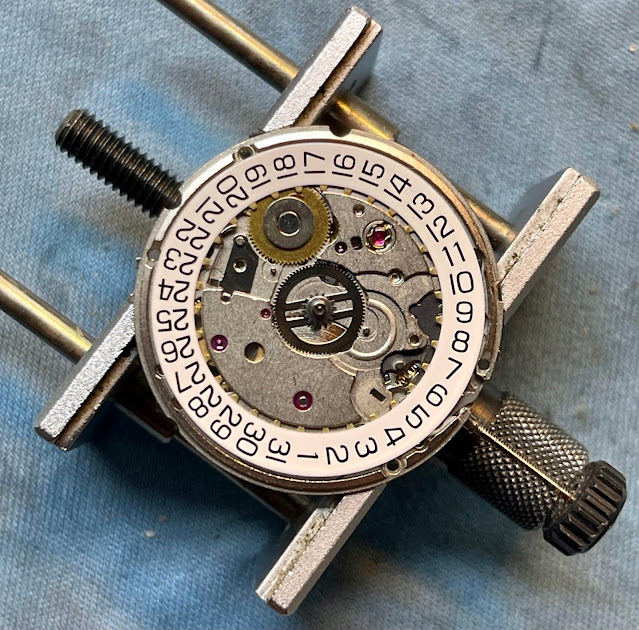 I'll have to remember to reinstall the hack lever that was under the barrel bridge.  This watch "hacks", or stops, when you pull out the crown to set the time. 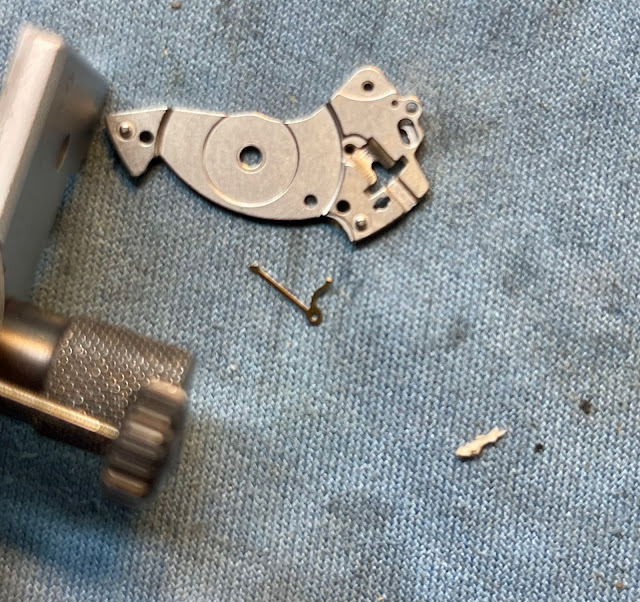 The back of the main plate is stripped of parts.  Everything can now go into the ultrasonic cleaner.  You can see by the number stamped below the balance area that this is an ETA 2824-2.  I would need to know the movement caliber if I wanted to purchase a part. 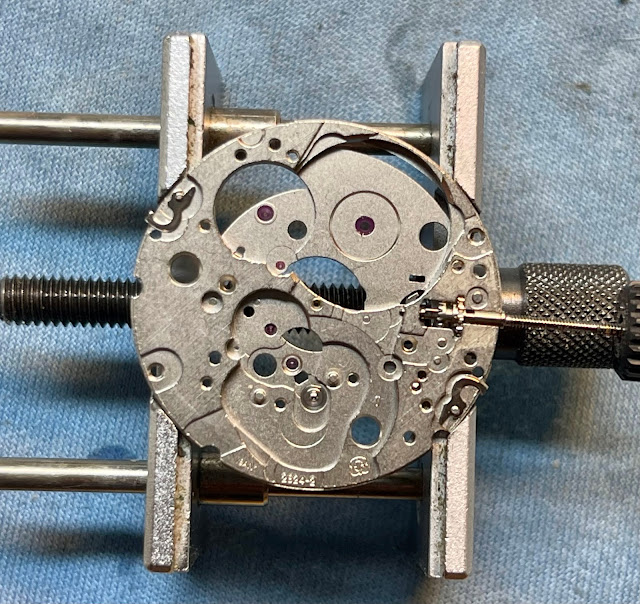 The mainspring barrel is a little different than vintage movements.  The cover is shaped like a trashcan lid with a rim around the edge. 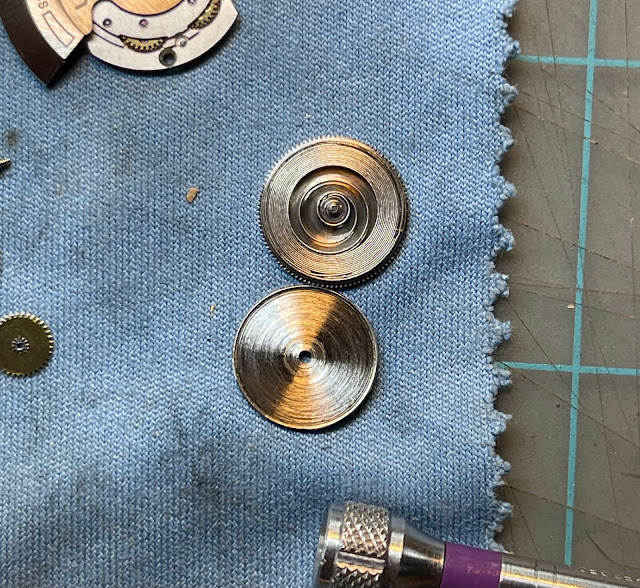 Everything is cleaned and dried.  There are a lot of parts here, I hope I remember where they all go. Ha ha! 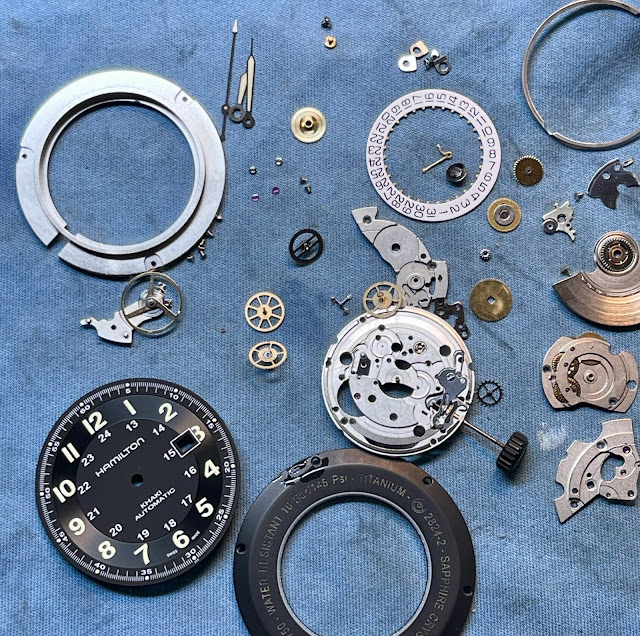 The train wheels are the first things back on - as long as they spin freely I can move on to the barrel and the pallet fork.  I also reinstalled the L-shaped hack lever, it will get covered by the barrel bridge. 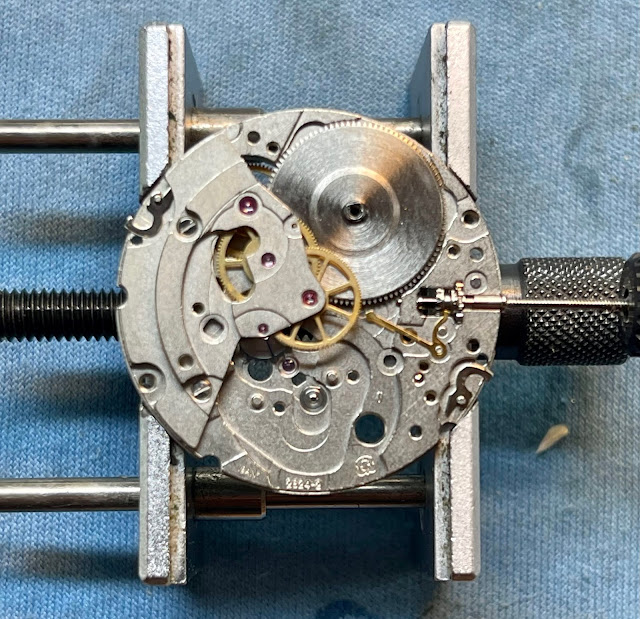 The pallet fork is back in place and once I reassemble the winding parts I'll be able to wind the watch manually. 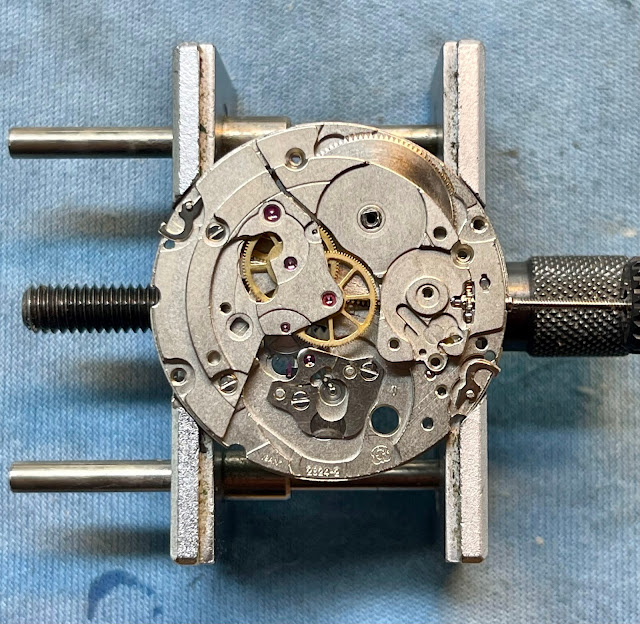 The balance is placed imposition and the watch is now ticking away.  However, I still have to put the balance jewels under the shock spring.  Then the watch can go onto the timer. 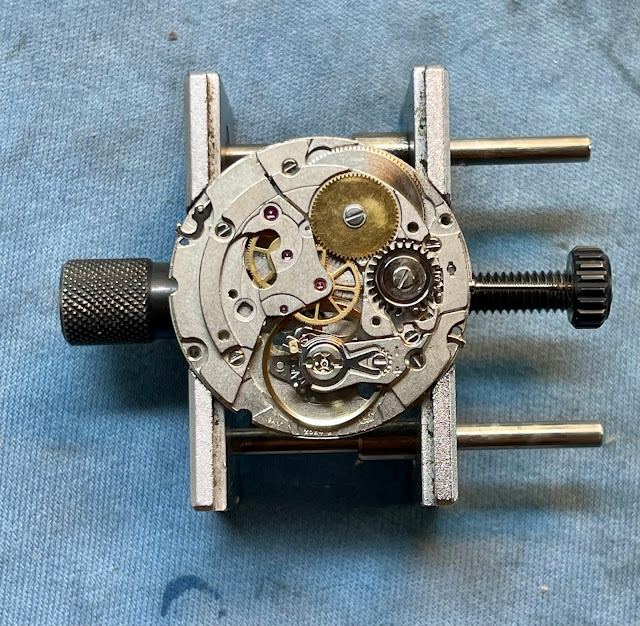 Hmm... it's running a little oddly.  I'll pull the balance off and reseat it.  Perhaps there's a speck of dust inside. 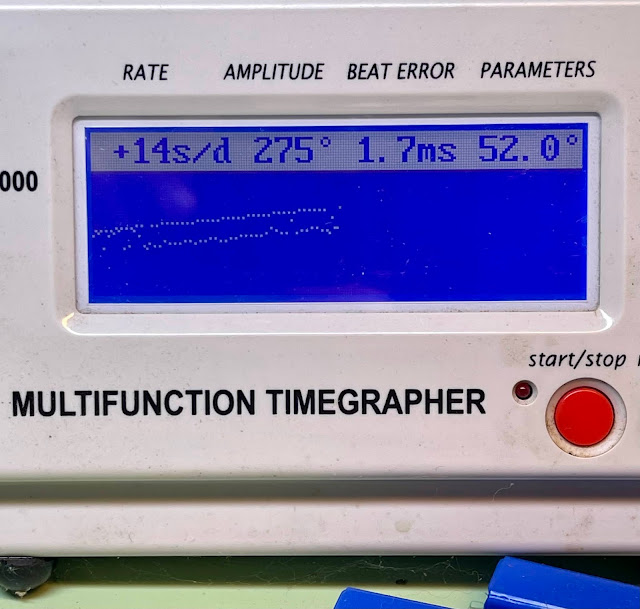 It's now running cleanly... although maybe a smidgen fast.  I'll let it run for a little while and then give it a minor adjustment. 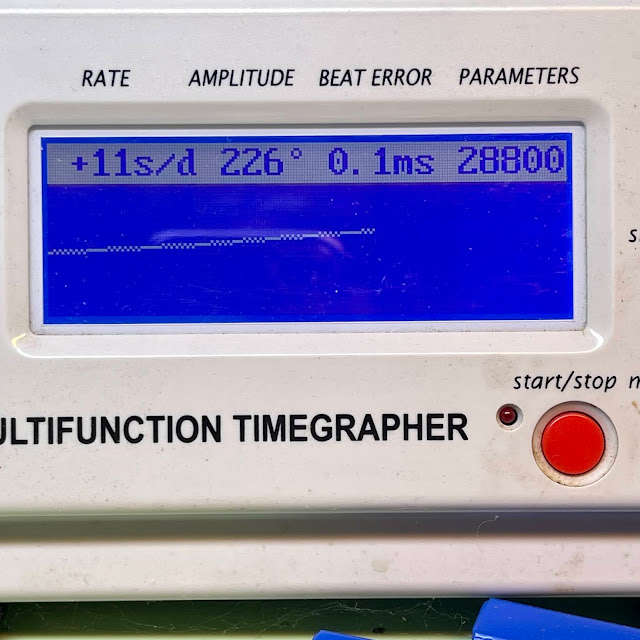 There... it doesn't get much better than this. 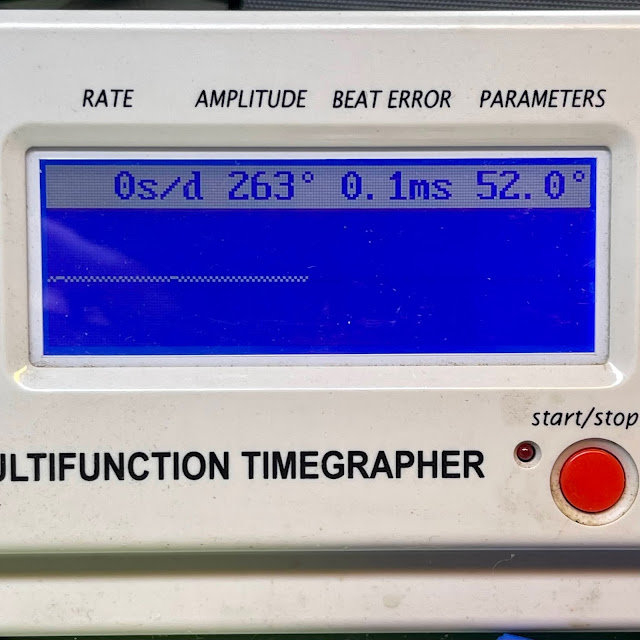 Everything goes back together with fresh lubrication.  I've restored well over 1,000 watches over the last 10+ years so I didn't have any trouble remembering where all the parts go. 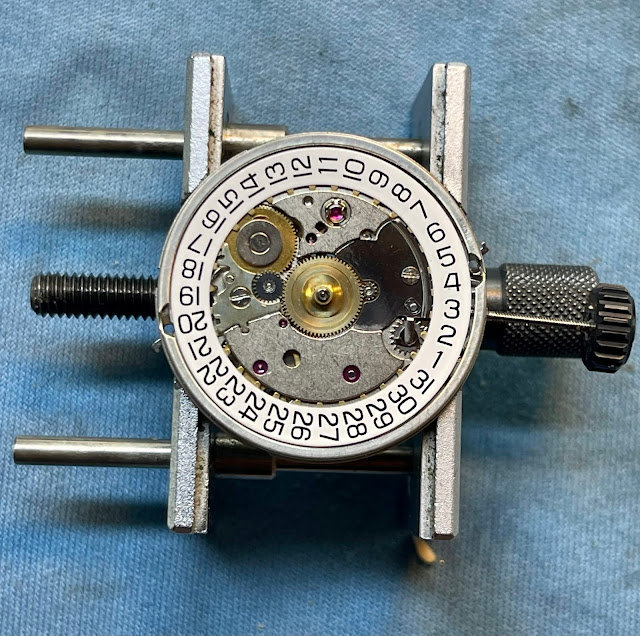 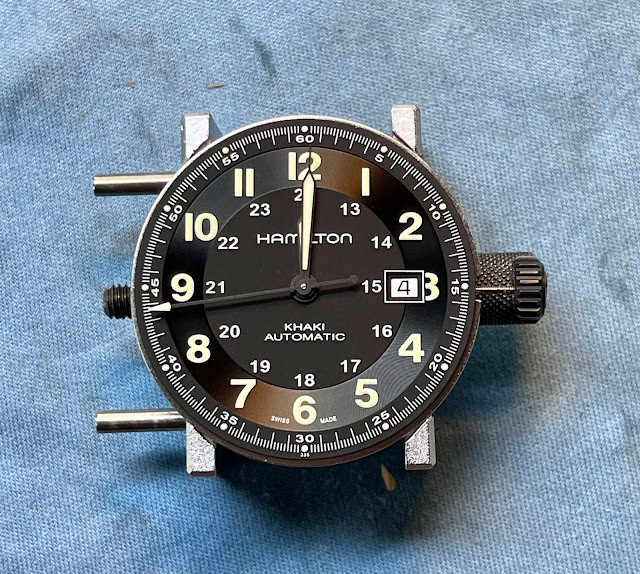 The movement is reinstalled in the case and the case back secured. 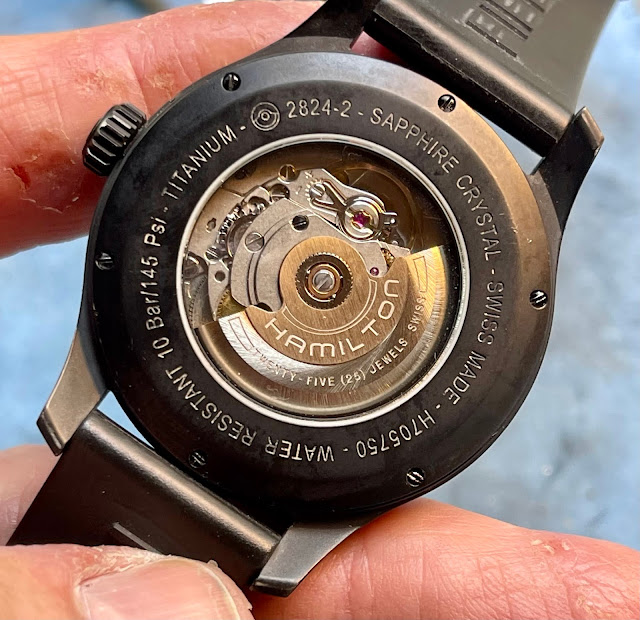 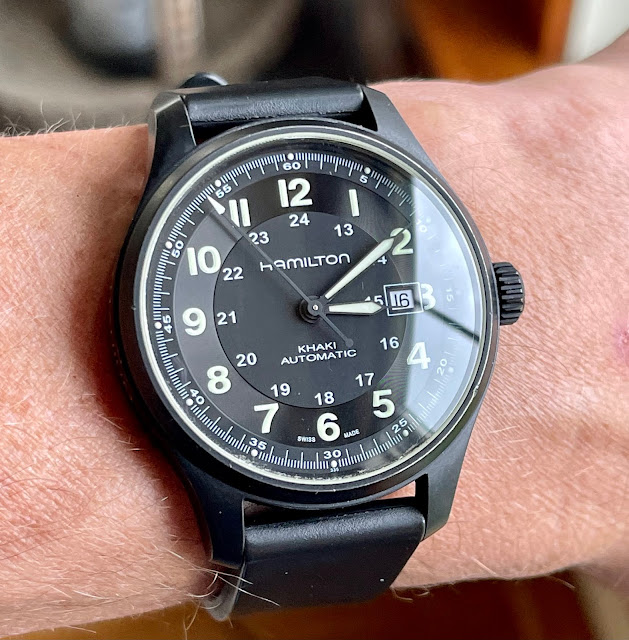