Someday maybe I'll start a Youtube channel and start every video with "Will it run?".  Every time I buy a project watch it's a roll of the dice.

I recently picked up a real clunker in the hopes that it would at least have some good parts.  Turns out it was a model I haven't seen yet, which is saying something after over 700 documented models. 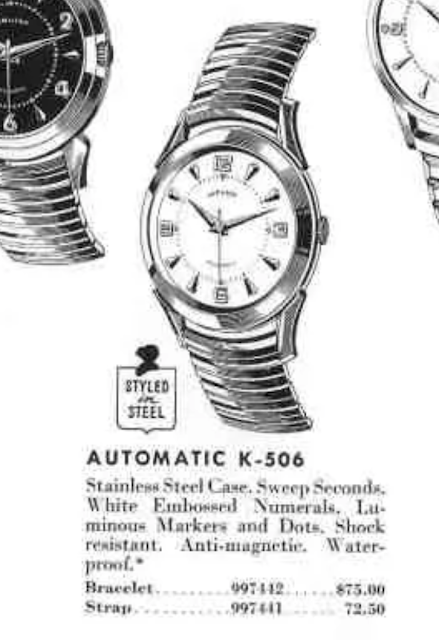 Hamilton's first automatics were introduced in 1954 so the K506 is a very early model.  Most K-series models feature a movement made by Kurth Freres, which was eventually acquired by Certina.
I wasn't really sure what model I picked up when I bought it.  The photos weren't very descriptive and even in person it's a little difficult to see the details through the beat up crystal. 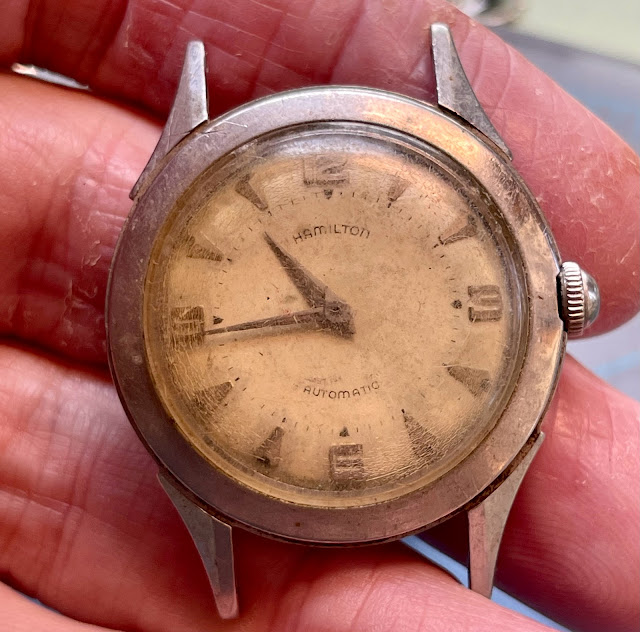 The case back is my least favorite design.  The case back is sort of a pie pan design with a separate ring that sandwiches the back to the rest of the case.  There isn't a lot of room to access the recesses in the ring so if it's gunked up or on really tight the ring can be very hard to remove. 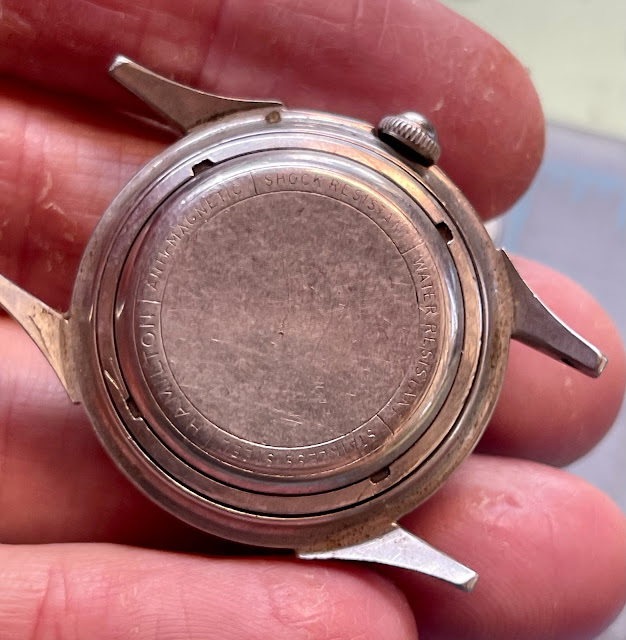 Opening it up I see some things are missing, or should I say that I don't see what I was expecting to see.  The rotor and the automatic framework is missing.  Without those parts this is basically a manual winding movement. 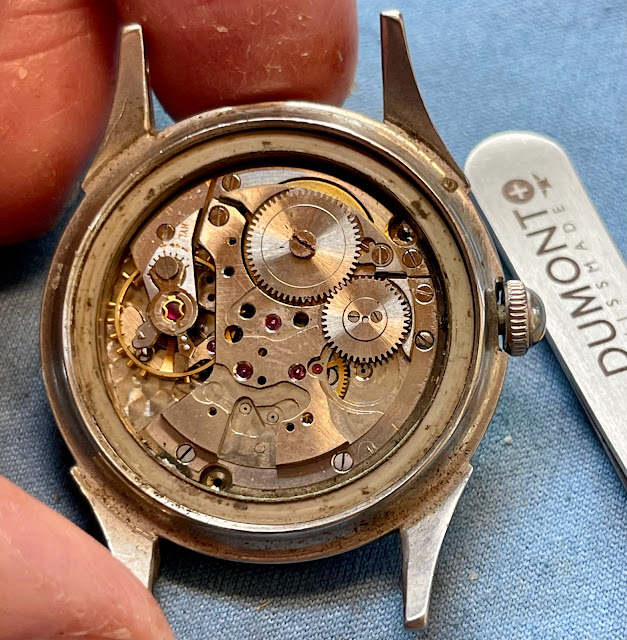 The crown is an obvious replacement as it's too large to fit the recess in the side of the case.  I'll replace that with something more appropriate. 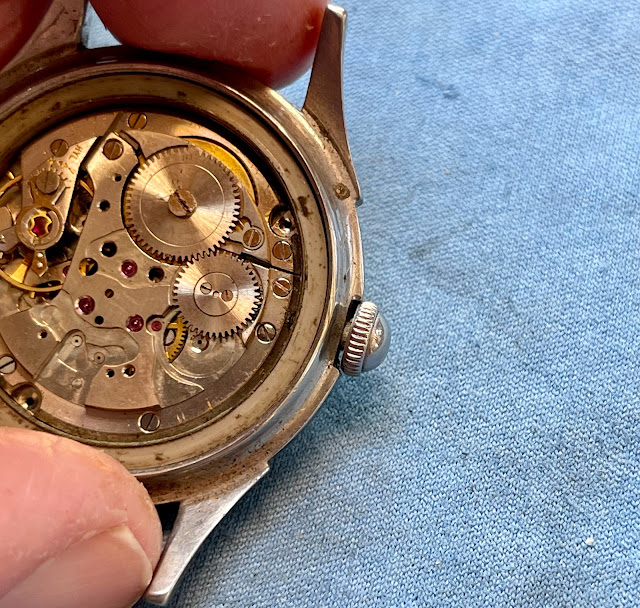 The inside of the case back makes identifying the model easy - K-506 is stamped right inside. 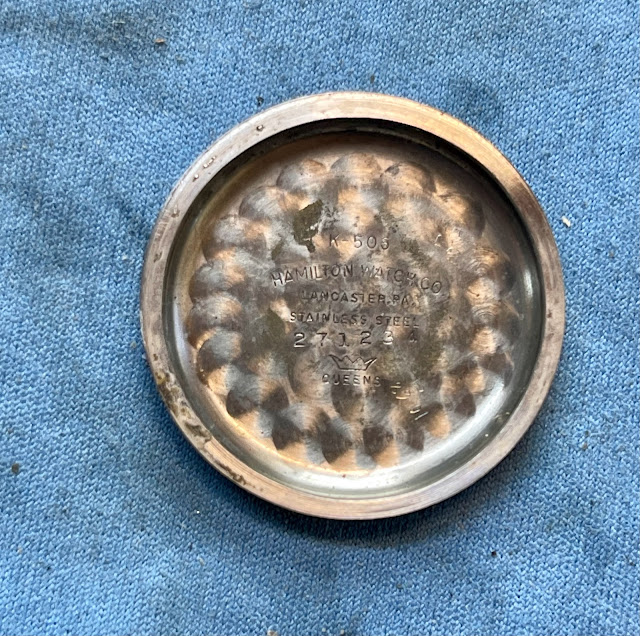 The sweep second hand is obvious missing.  What's less obvious is the post for attaching the second hand is also missing.  I can see the pivot of the 4th wheel that the second hand attaches too but the bit that extends out of the dial for the hand to attach to is gone.  The dial is obviously 60+ years old but it doesn't look horrible - at least the patina is even and once I remove the old lume and replace it with fresh material it should look a little better. 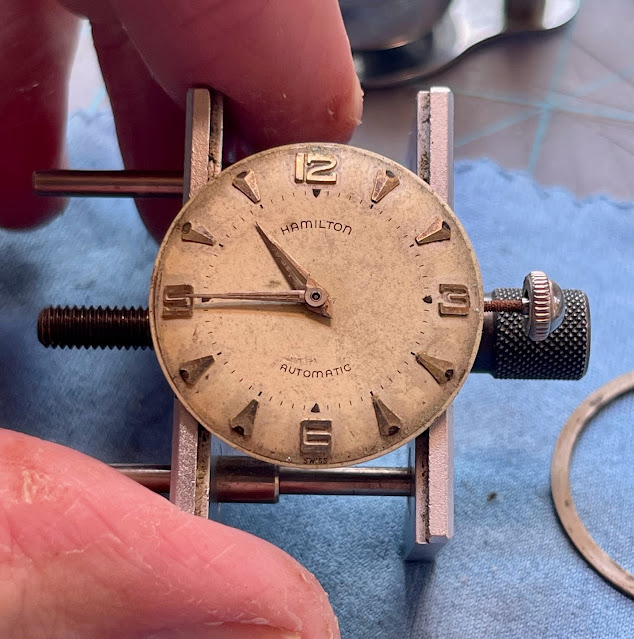 It's been a while since I tackled an automatic like this.  There are a lot of parts to keep track of but this movement tends to go together smoothly. 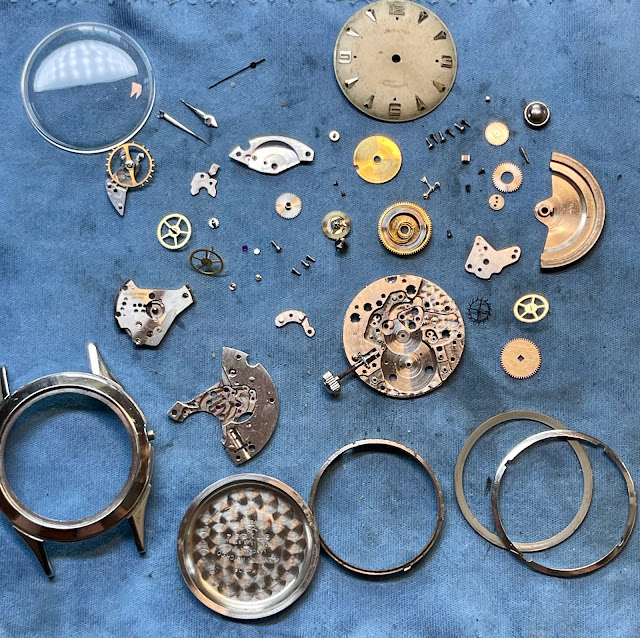 Everything is noticeably brighter now that it's cleaned.  I replaced the 4th wheel with one from a donor movement and the movement is ticking away with a decent but somewhat wobbly motion. 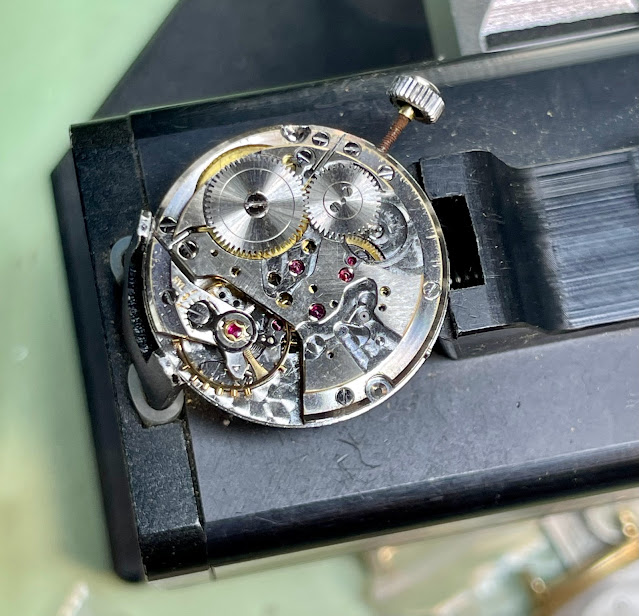 The timing is a little erratic thanks to the wobble.  The pivots on the balance looked okay but they might be worn enough to have a little too much slop in the jewels.  I'll try another balance and see what happens. 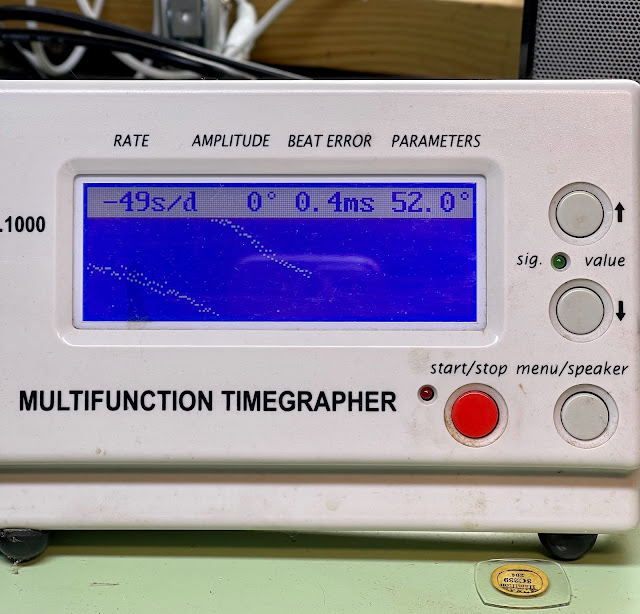 With a different balance but the same (clean) jewels the timing looks much better.  I can easily adjust the beat rate and bring it in line. 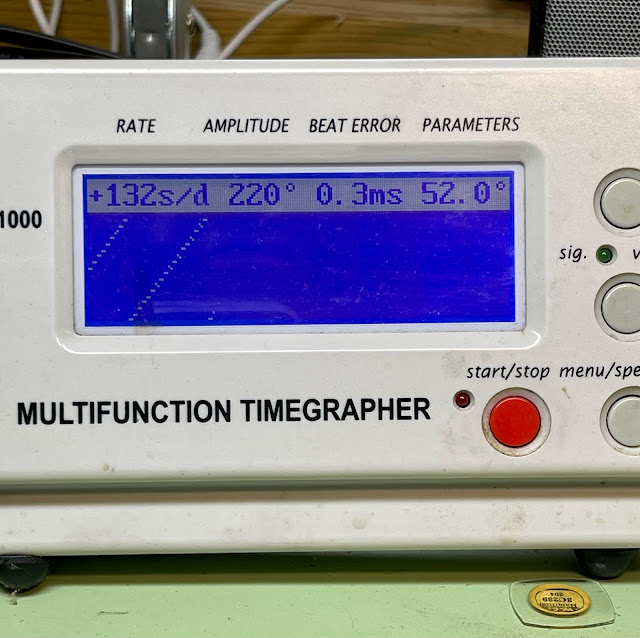 There... not much to complain about with this timekeeping. 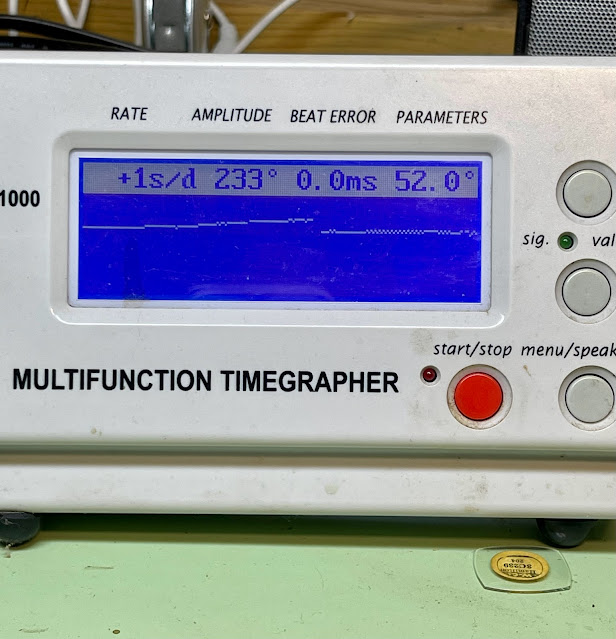 I took the automatic framework and rotor from a donor movement and the movement is complete again. 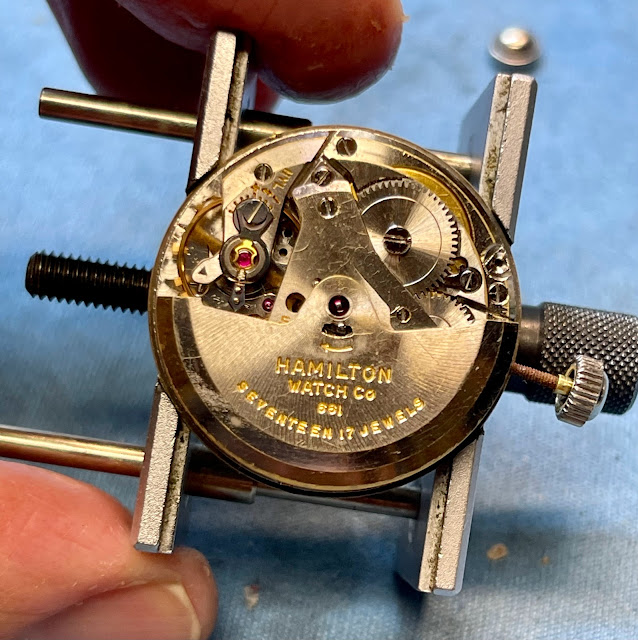 I relumed the bottom of hands and the dial markers.  Once it dries I'll scrape the excess off the hands with a razor blade. 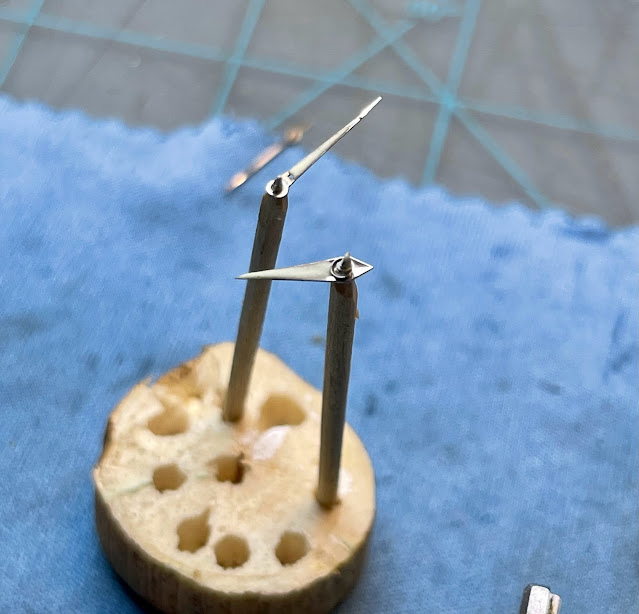 The finished watch doesn't look new by any stretch of the imagination but it sure looks better than what I started with.  A new crystal, a proper crown and second hand definitely makes a world of difference.  Paired with a casual brown strap, I think the watch really looks great. 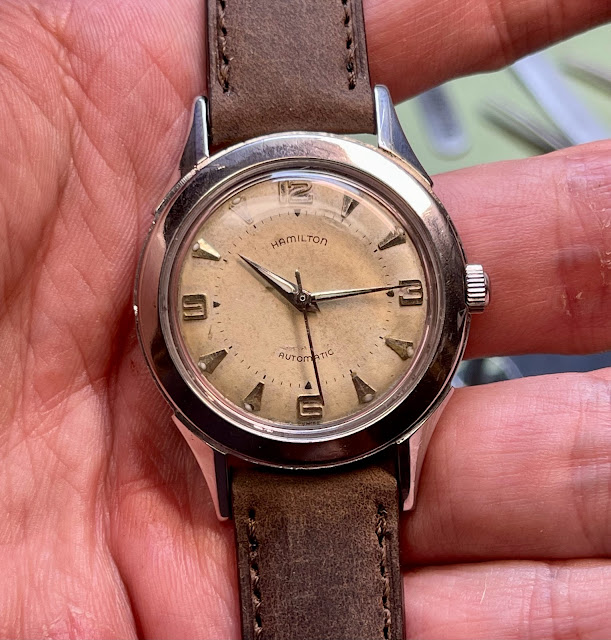