Back in 2013 I did a post on the Coral Brock and I recently had the opportunity to work on another that I thought I'd share.

The Coral Brock is a one-year wonder and only produced in 1940.  It was part of a small line of models that were offered in rose gold (or gold filled) just before WWII.  I guess rose gold, or coral gold, was very fashionable at the end of the 1930s and other manufacturers offered similar models.  By the end of the war, priorities and fashions had changed. 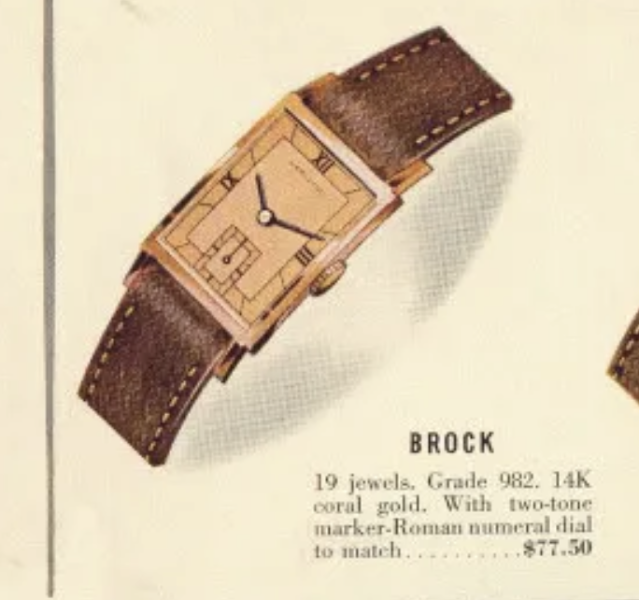 I recently received a Coral Brock in need of some TLC.  It features an applied gold numeral dial though.  My camera doesn't really pick of the colors very well but it looks like the applied numerals and hands are also rose gold - that's VERY unusual.  Other Coral models with applied gold numeral dials would have rhodium plated (white gold colored) numerals and hands.  The dials would also be salmon colored. 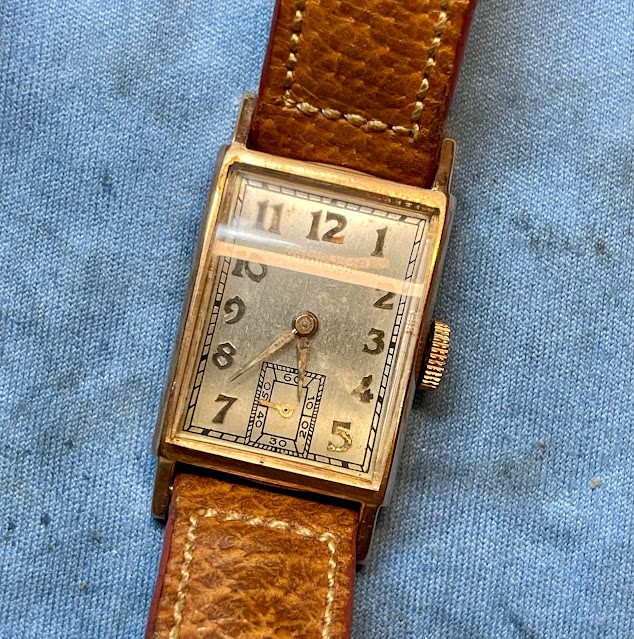 If you look closely at the photo above, the second hand is definitely yellow, compared to the case, hands and markers.
From the side you can see the rose-colored case a little better.  The crystal is a plastic cylinder style - not correct for the Brock but still looks fitting. 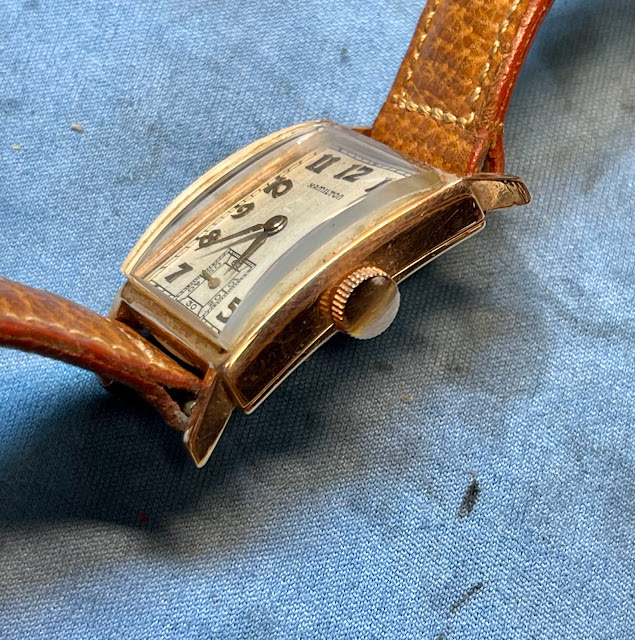 With the bezel removed you can see the dial has some for of dial rash forming but it otherwise looks unremarkable.  The finish is a little more sparkly than a typical silver butler finish and I suspect this dial has been refinished at some point.  The crown is not original but it's rose-colored and goes with the watch appropriately. 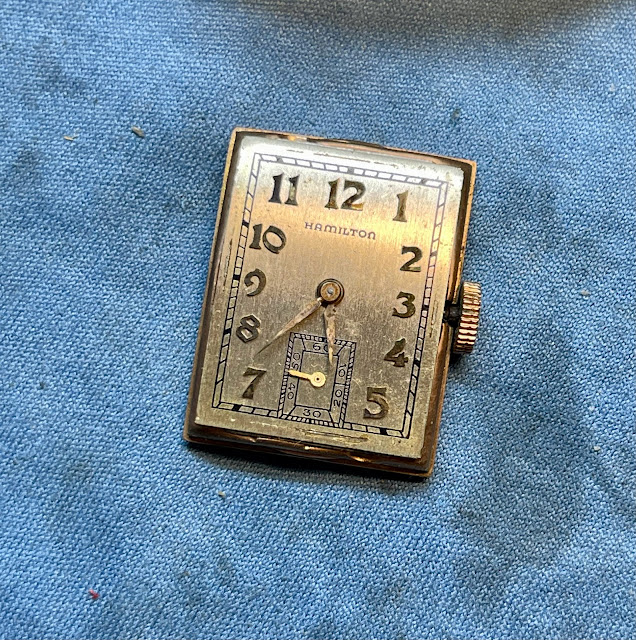 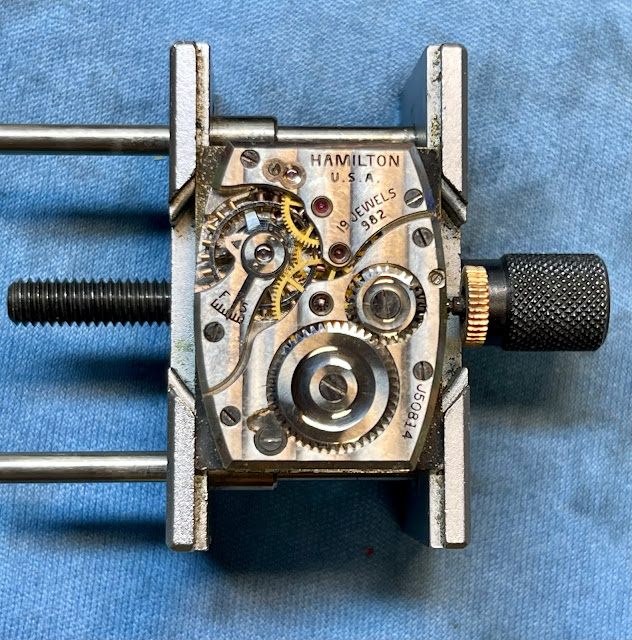 The inside of the case back looks like you'd expect, clearly marked Hamilton W Co. and 14K. 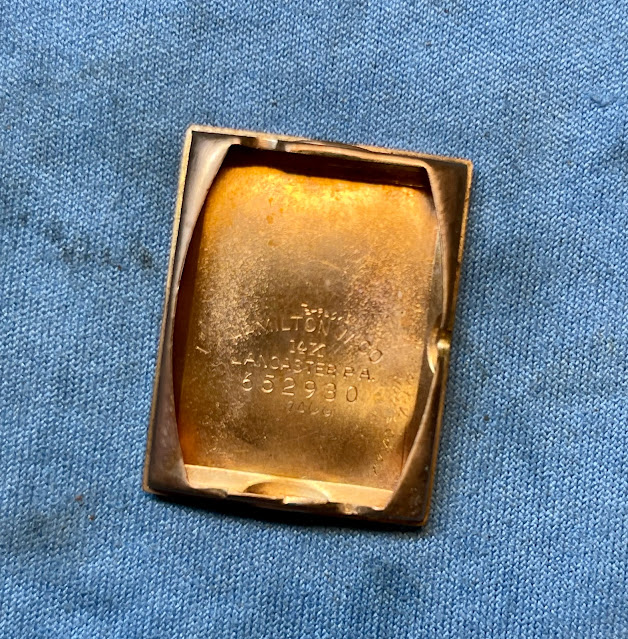 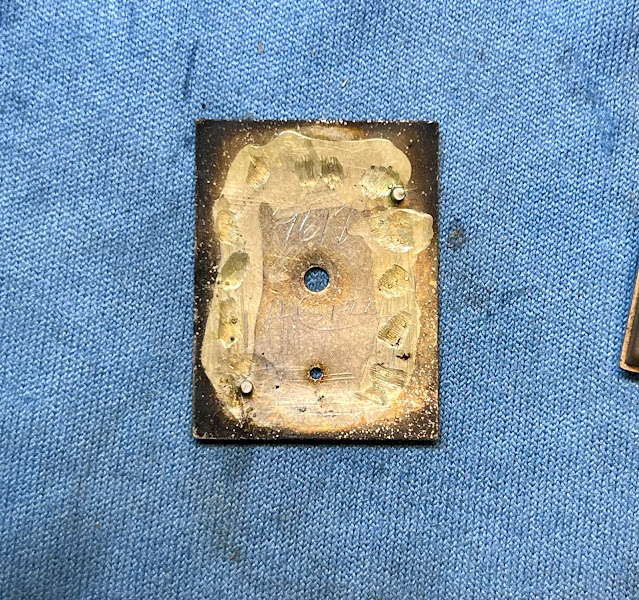 Looking closely at the balance, I see pivots on both ends... so why is it wobbly?  Most likely there's an issue with one of the jewels, either in the balance cock or the main plate. 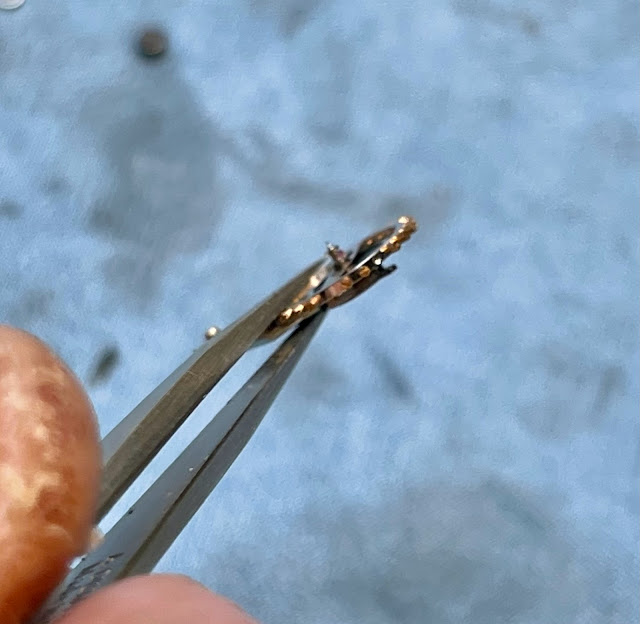 Looking at the balance cock, I don't see anything too unusual. 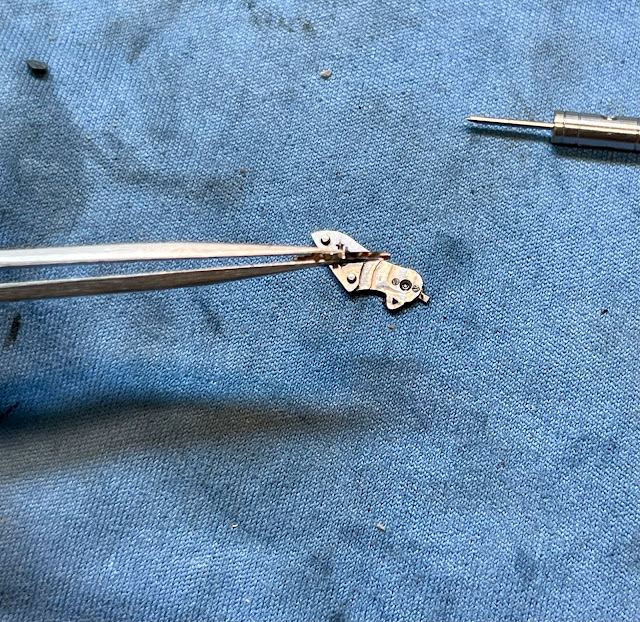 The barrel has an old blue steel mainspring inside.  It has most likely set in place and lost most of it's potential energy. 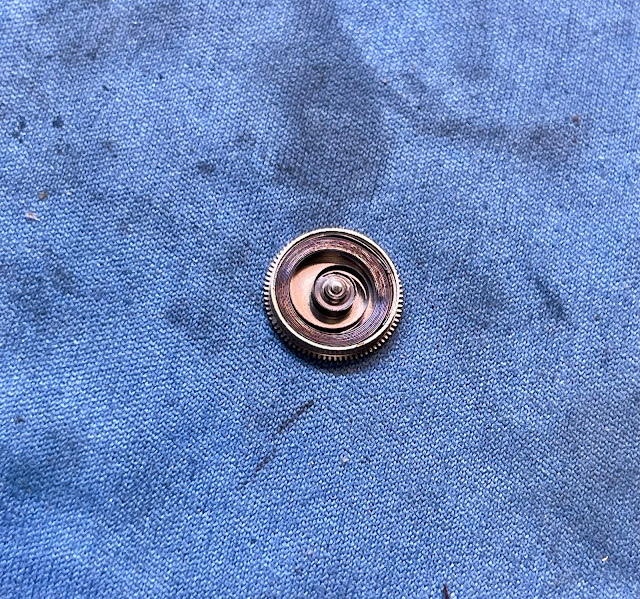 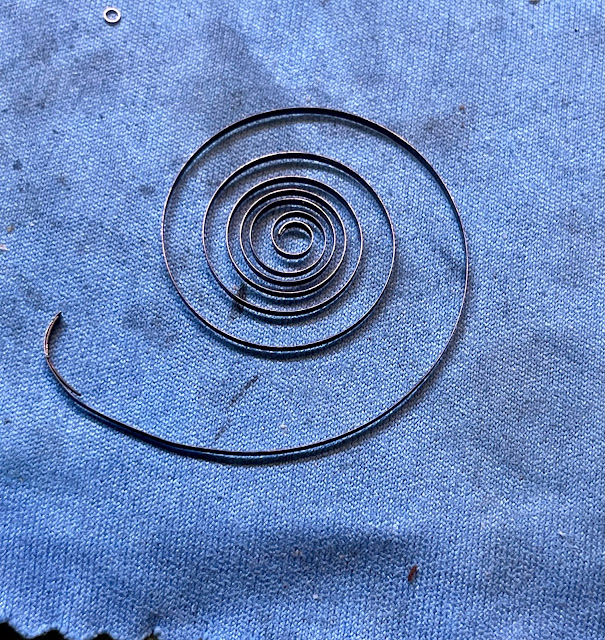 I noticed one of the corners of the crystal is cracked - thats probably the cause of the dial rash as a crack like this can let in moisture. 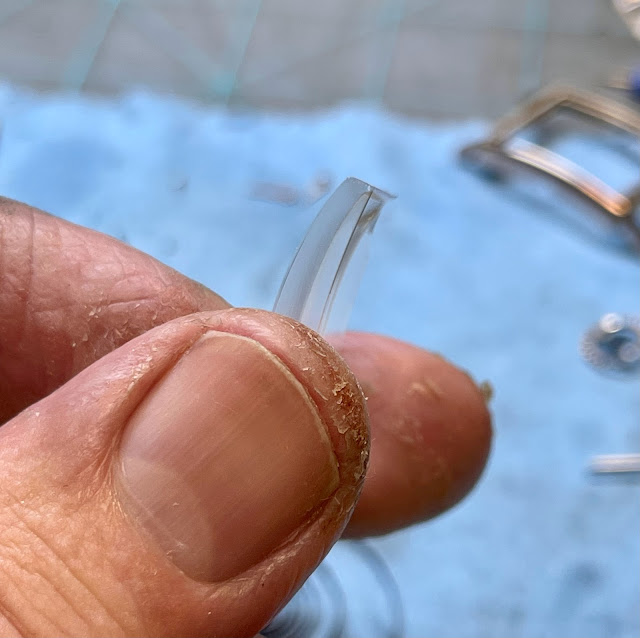 Everything is cleaned and dried.  It will be easier to inspect the jewels now. 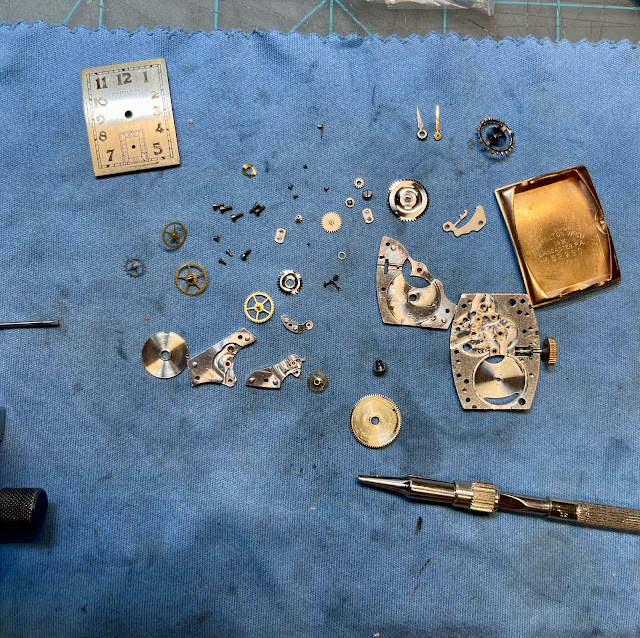 Sure enough, the balance jewel in the main plate is cracked and sort of egg shaped now.   It was hard to get a photo of it but if you zoom in you can probably see it. 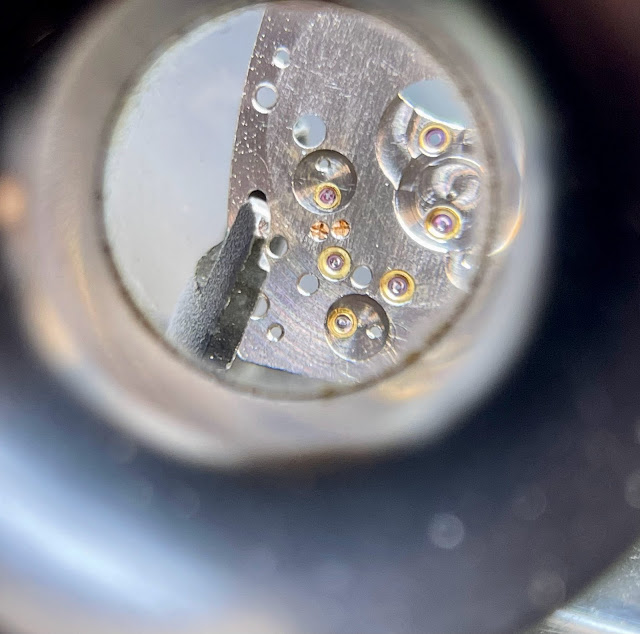 I'l use my staking set to take a jewel from another 982 and install it in the main plate. 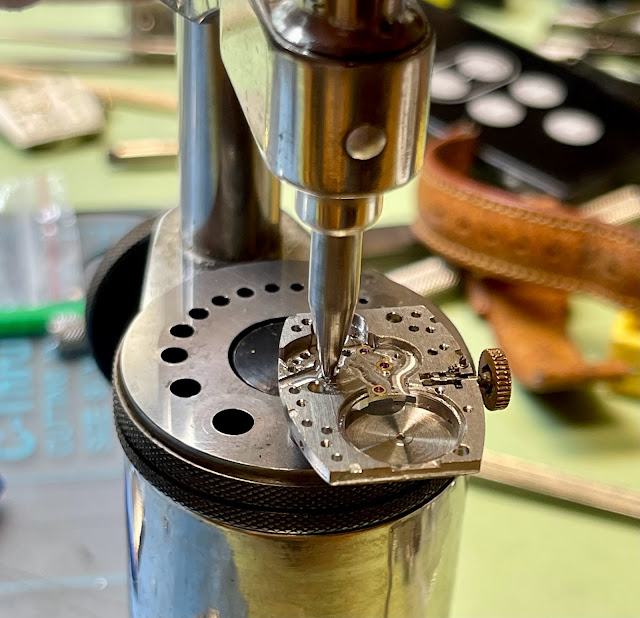 With the balance reinstalled I can see if the end shake is appropriate and confirm that the balance swings freely. 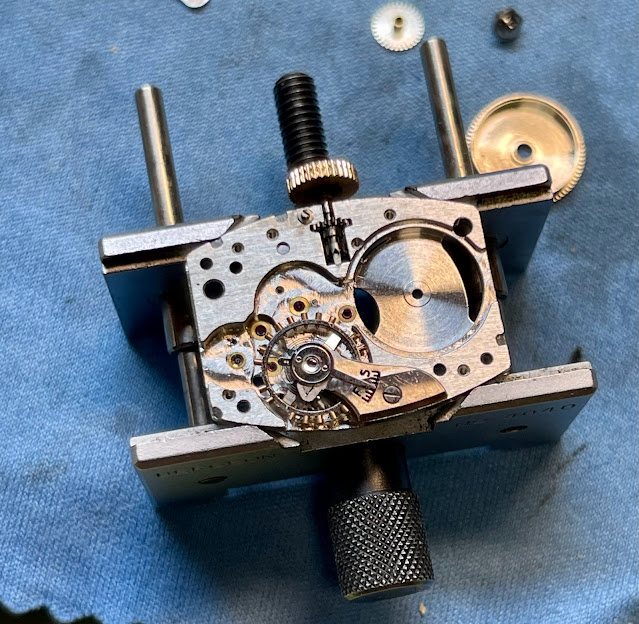 Well, this movement was a real challenge to get running cleanly.  I finally tweaked the hairspring  and regulator to just the right spot.  The beat error is a little higher than I like but I don't want to risk screwing it up.  Sometimes you have to know when to throw in the towel. 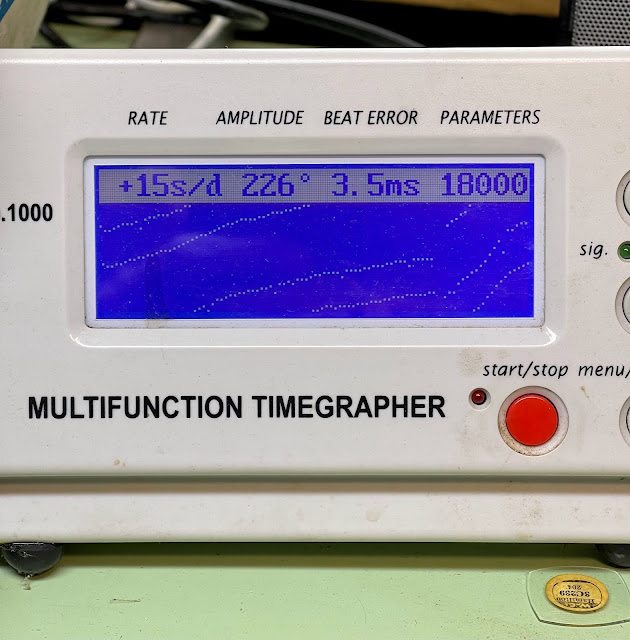 I installed a new glass crystal to complete the restoration.  This watch now looks just as it should.  However, I think looking for a proper black numeral dial might be in order. 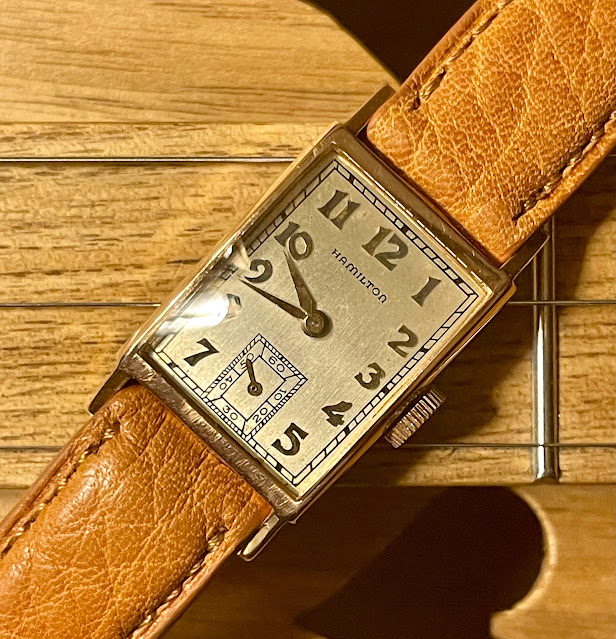