It's been a while since I've come across a new model, and it's an interesting one as you'll see.

The model is a Hamilton Aldrich introduced in 1958.  The model was made for three years.  It came in a solid 14K gold case.  The sterling silver dial has solid gold numerals and features a unique embossed rim with integrated markers. 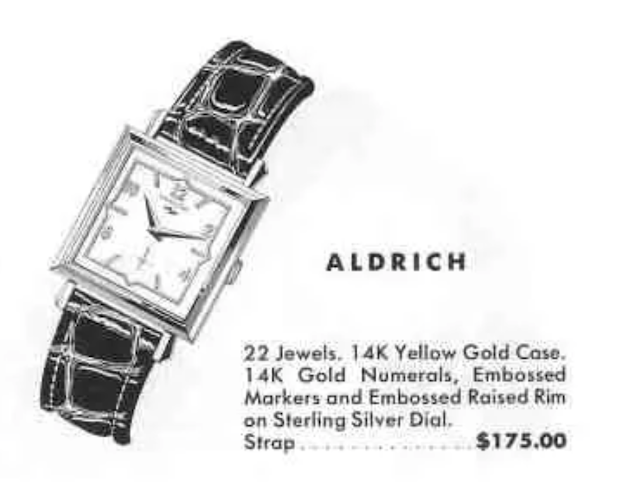 My project watch is actually an Awards Division model.  Hamilton had a separate group that created models for companies and organizations to use as awards or presentations.  Typically the Awards Division used models that were discontinued and often changed the dials slightly.  They wanted to make sure that an award recipient wouldn't find their award in their local jewelry store.
You can see that this watch has had an issue with water on the dial and at some point the second hand was replaced with a black version of the wrong style. 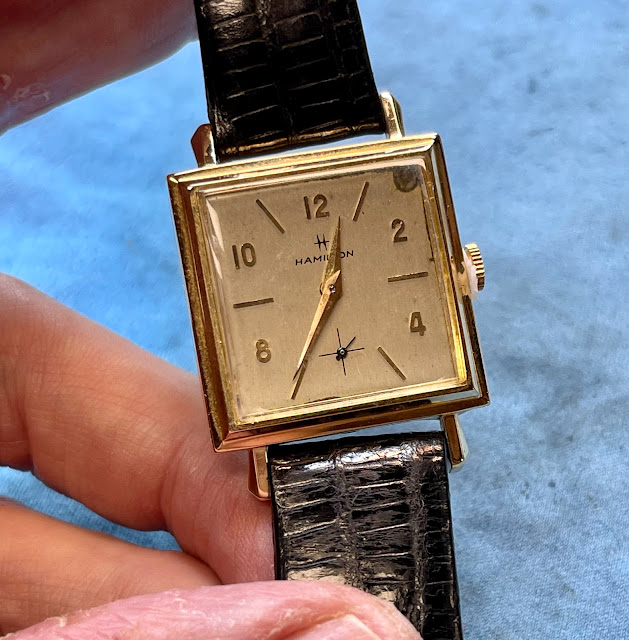 Here's a little mystery... this watch was a 30 year anniversary dated 1953.  That's 5 years before the Aldrich came out.  However, if you look at the dial, it has the stylized H logo that was introduced when Hamilton purchase Huguenin Watch Company in the late 1950s.  So it wasn't presented in 1953.  It wasn't presented in 1983 either, as Hamilton stopped production of US models in 1969. 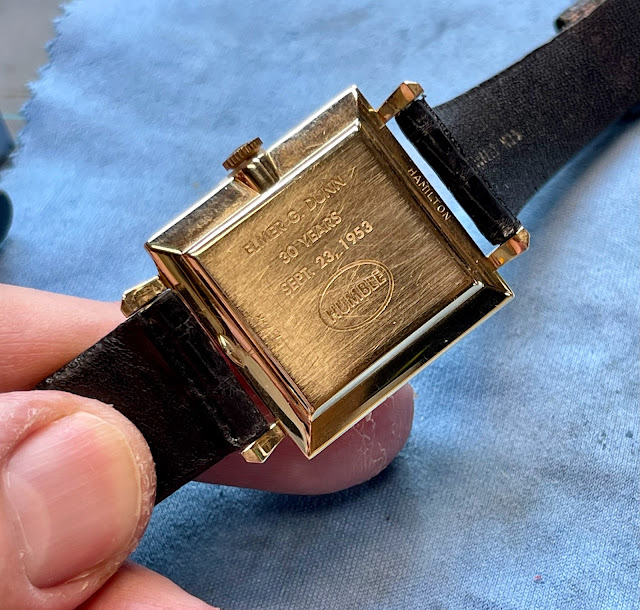 This watch came with a little plastic retainer between the crown and the case.  That's typically used with quartz watches as pulling out the crown stops the watch, or turns it off.  For a moment I thought perhaps this would have an Electric movement inside.  You should turn off Hamilton Electrics when they aren't being worn by pulling out the crown.  That saves the movement from unnecessary wear and tear. 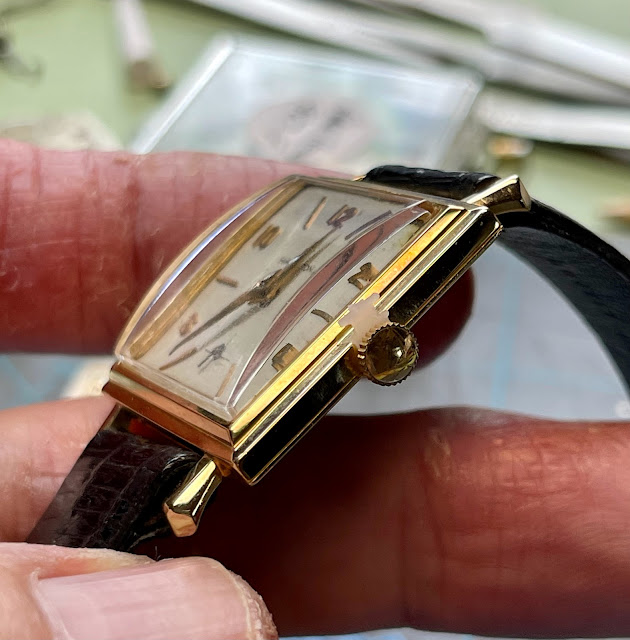 Nope, it has a 770 movement inside.  The 770 was Hamilton's flagship movement, arguably the best that Hamilton produced, although the other calibers like the 735 and 731 were pretty good too.  The 770 featured 22 jewels so it was well protected from dust, shock, etc.  Also, the 770 was introduced in 1955... two years after the date on the case back.  That's another clue in the mystery of when this watch was produced. 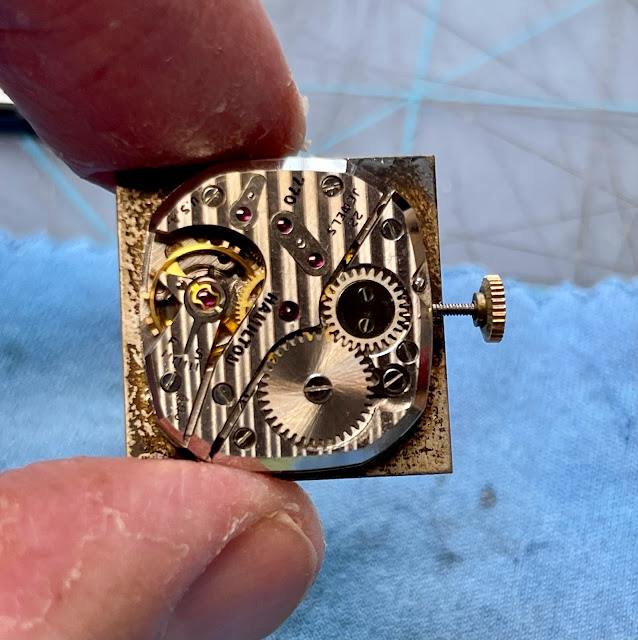 Coincidentally I happened to have an authentic Hamilton Aldrich dial and movement - thanks to someone who scrapped a $600 watch for $150 in cash.  The dial is a little worn but it's original and that can be important... it's only original once. 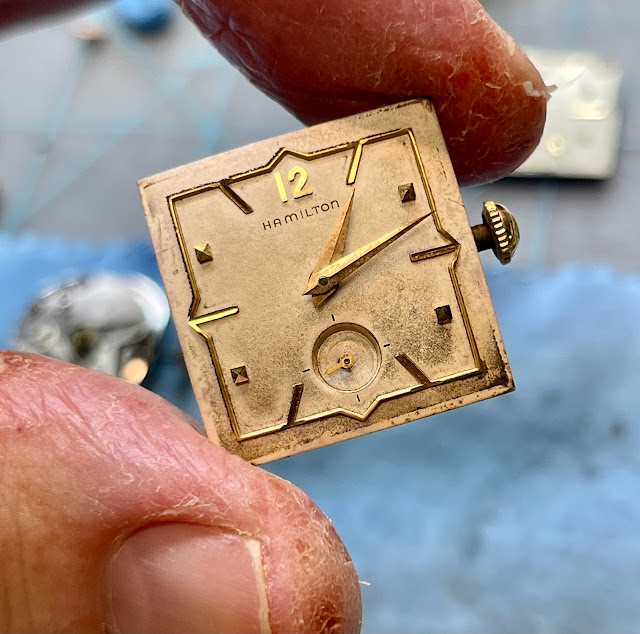 Looking at the catalogs, this dial came from a 1960 Aldrich as the 1958 and 1959 dials featured a gold diamond shaped marker under the Hamilton logo. 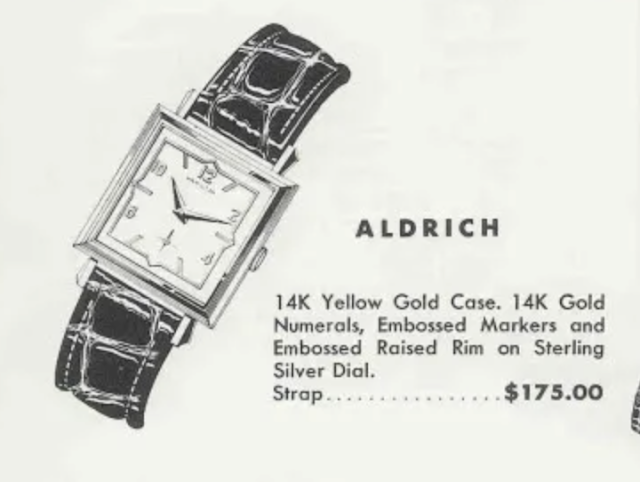 This movement also has an authentic Hamilton crown, which I'll be able to reuse someday too. 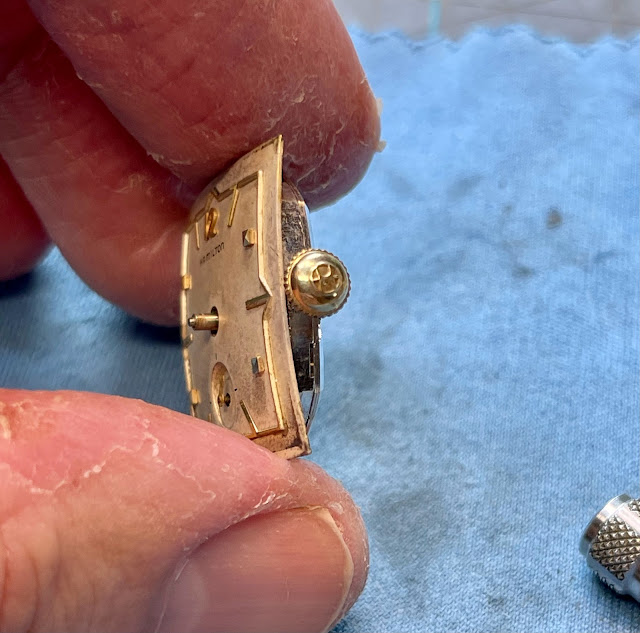 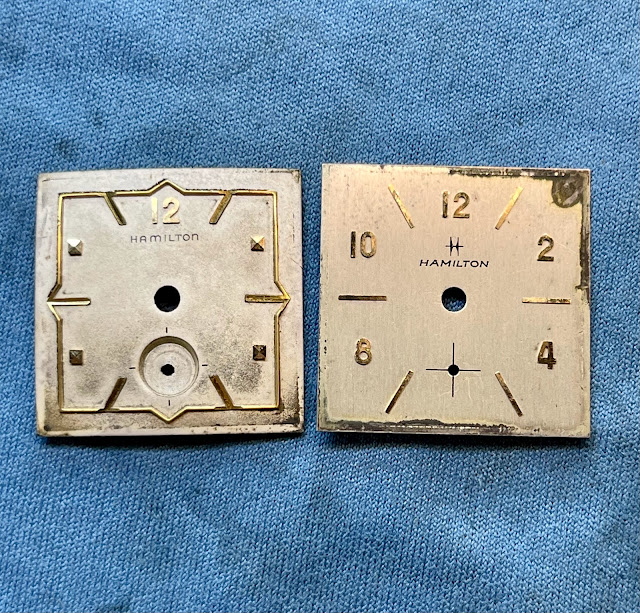 Because of the contour of the dials, the two movements have different length cannon pinions and hour wheels.  The Aldrich requires a longer cannon pinion to get the hands above the domed dial. The earlier 14/0 sized movements like the 980 and 982 also featured different canon pinion styles depending on the type of dial. 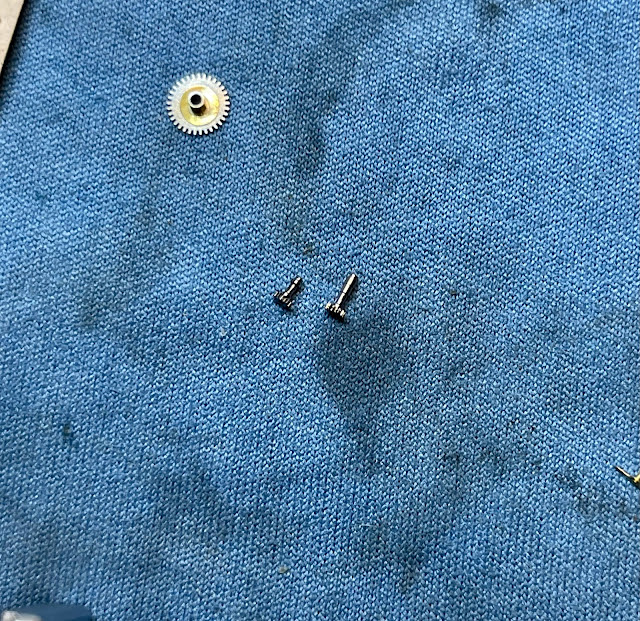 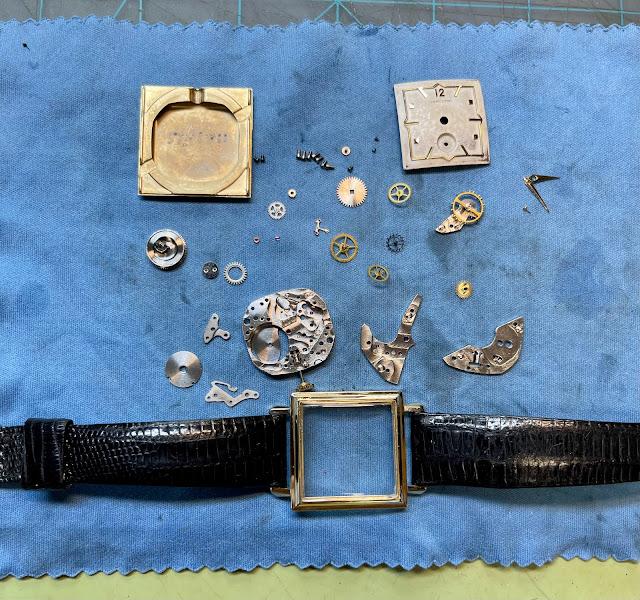 The reassembled movement is ticking away with good motion.  It's off to the timer to find out how well it's actually running. 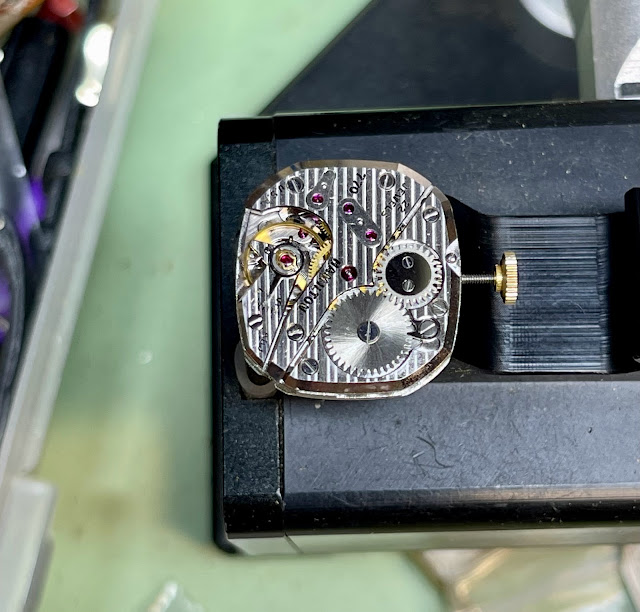 According to the timer it's running a little slow but the beat error of 6.1ms is way too high.  That means the balance isn't centered so I'll have to take the balance off and try to adjust it. 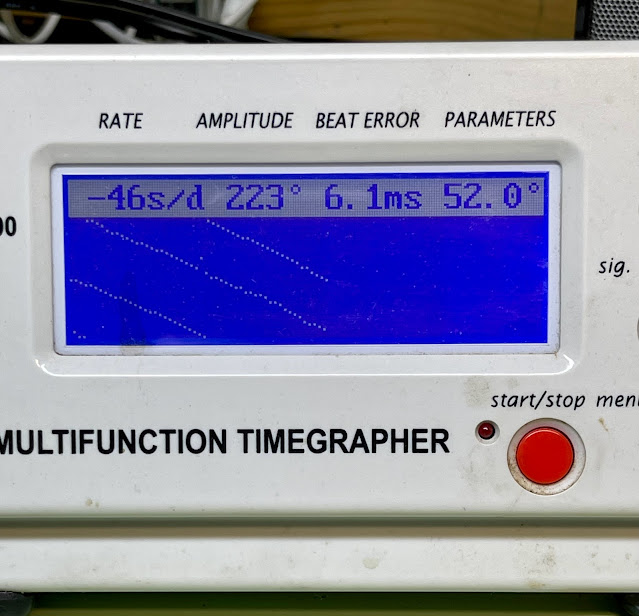 I made a pretty good guess... now the beat error is 0.0 and the timing is just about spot-on. 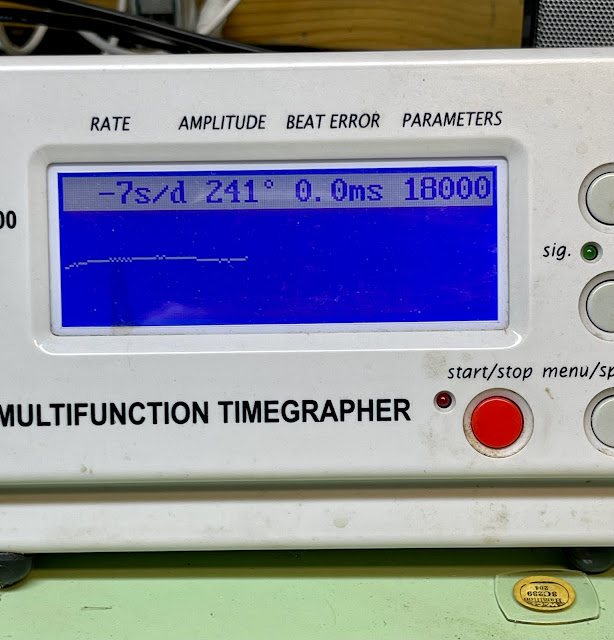 The reassembled movement and authentic Aldrich dial go back into the case.  A correct second hand completes the restoration.  The Aldrich is a classy looking watch and the proper dial really makes a statement - don't you think? 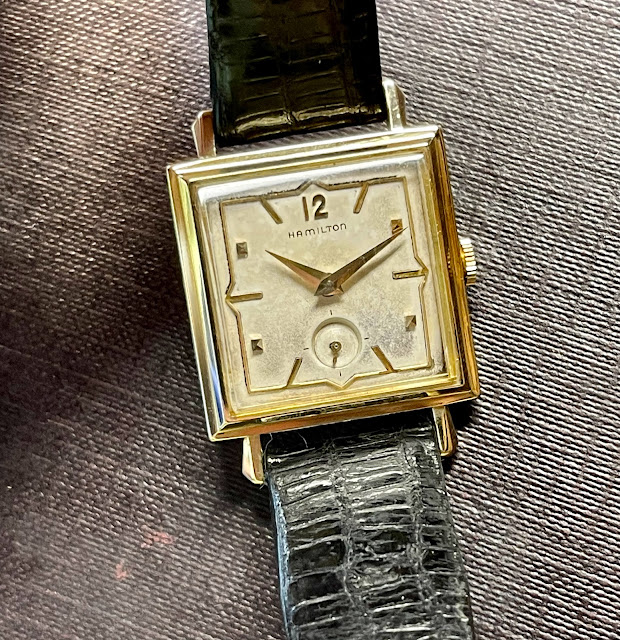