Asymmetric models are some of the most sought after watches in the vintage Hamilton lineup.   In fact some of them sell for more than their inflation-adjusted original retail value!

The very first asymmetric model is fairly obscure.  It's called the Spur.  It showed up in the catalogs in only one year - 1930.  However, production records indicate the first Spur was produced in 1928 and the last one left the factory in 1932. 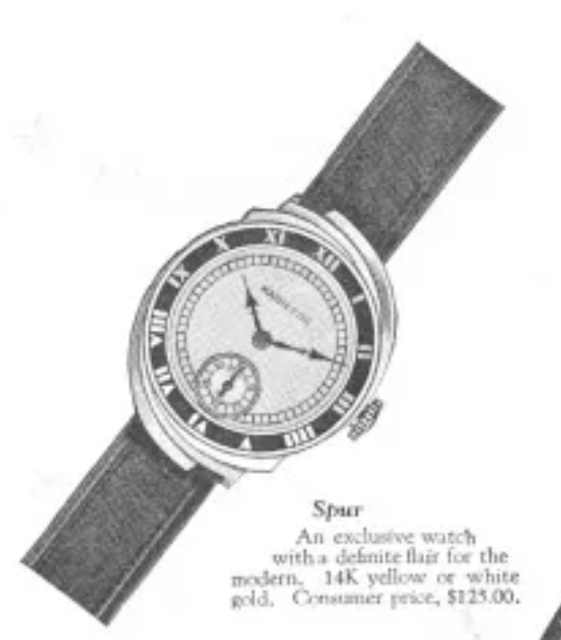 The Spur is a very interesting model.  Priced original at $125 in 1930,  the same cost in US dollars in 2023 would be $2,190.  However, you can expect to pay over $7,000 today for a good example, assuming you actually find one for sale.
In more modern times (1992) Hamilton introduced "reissues" of many vintage models - including the Spur.  Generally reissue models are not very popular.  The reissue version of the Spur features a mechanical movement but the case was electroplated in 18K yellow gold.  Believe it or not, a reissue version of the Spur will likely cost you more than $2000 today as well!
The Spur has a very unusual case with a Piping Rock-esque black enamel bezel but the center of the case has hidden lugs behind a set of cascading fins.  It's a tiny model, even by vintage watch standards, and the strap is a mere 12mm wide (1/2").
The Spur is way "too rich for my blood" so you'll never see one on my wrist but it's so small that if I did have one, it would end up on my wife's wrist anyway.  That said, I did happen to lay hands on one briefly, as someone reached out to me for help with theirs.
As received, this king had lost his crown.  Crowns simply screw on to the stem that goes into the watch.  The crown turns the stem and the stem winds the watch or sets the time.  The trick to crowns is there are different styles, shapes, threads, etc. and they have to be matched to the style of case and the length of the stem in order to be a good fit.
Overall the watch looks great, other than a minor scar on the dial between the minute hand and seconds register, probably due to removing the hands at some point over the last 9 decades. 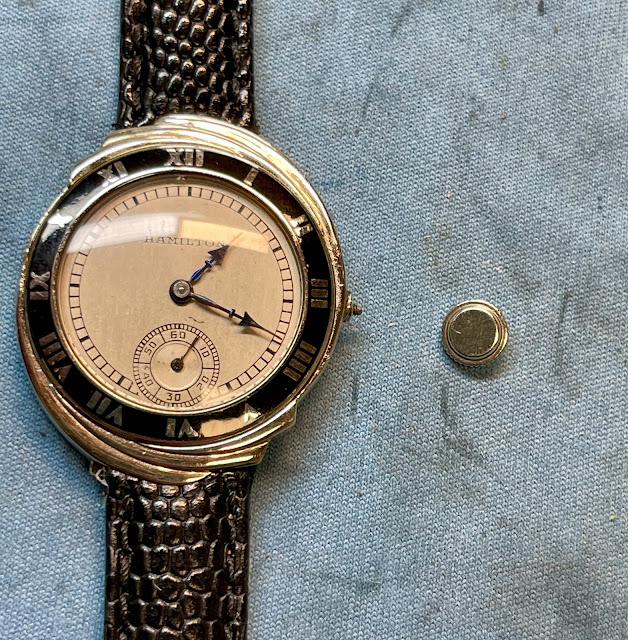 This style of crown is common to models of this era, although often it's a dust proof design with an integrated dust shroud.  This crown is obviously bent, suggesting it got caught on something while on the wearer's wrist.  It's also indicative of winding a watch while it's on your wrist.  That technique is commonplace but it puts uneven wear on the crown and stem that can certainly weaken a crown after years of use. I'm not convinced that this crown is original to the watch.  The reason is the stem tube has been shortened at some point.  This model pre-dates the introduction of dust shrouds, or at least did not originally use that style crown.  This stem tube should be longer and is meant to extend into the crown to keep out dust.  I suspect that at some point over the last 90 years, someone modified the case in order to fit the wrong crown. 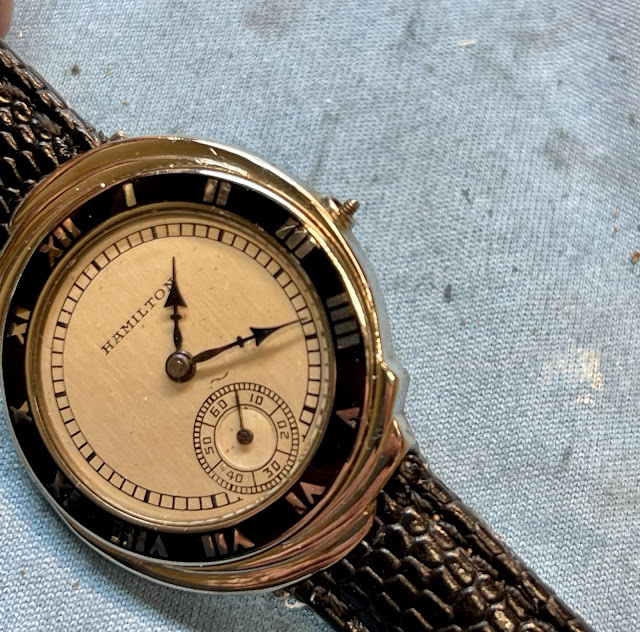 Tucked inside the center of the three-piece case is a 19 jewel 979 movement.  This serial number dates to 1929.  The case is just barely larger than the movement, showing this is a very small watch. 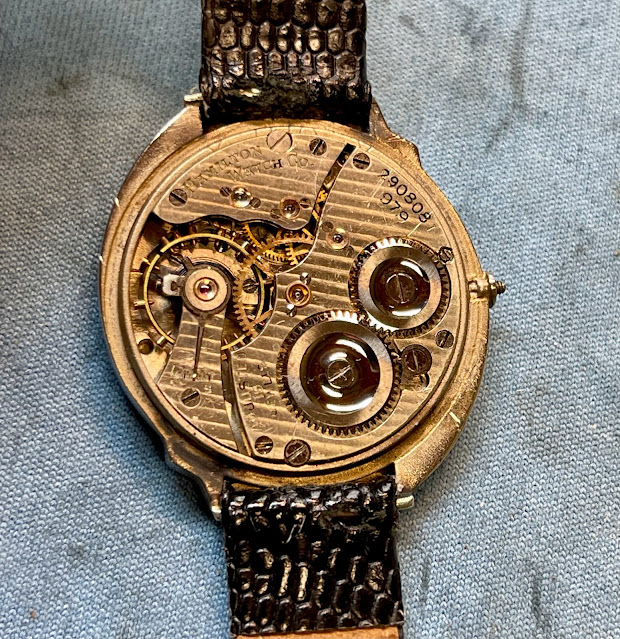 The owner said the watch wasn't due for an overhaul but I couldn't resist the temptation to put it on the timer.  Overall it runs cleanly with solid amplitude.  It's a little wavy and that could be due to wear and tear over 90 years.  Certainly looks very good by my standards. 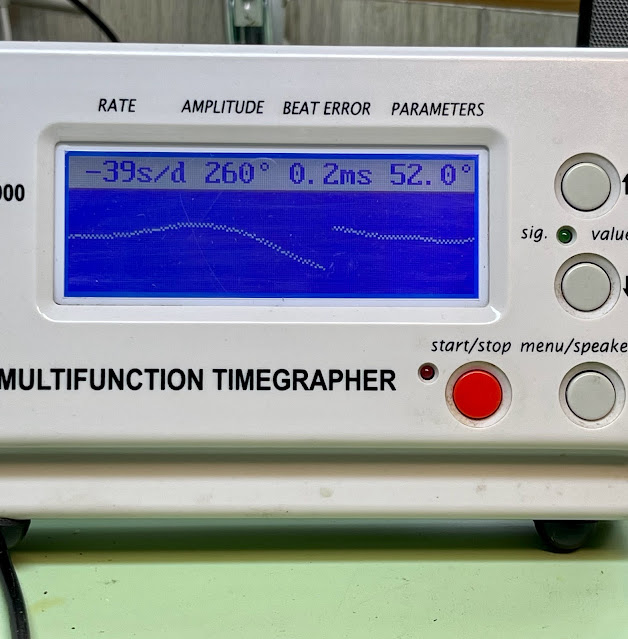 A replaced the crown with another period-correct version.  It's not exactly the same style as the damaged crown but to my eye it's a better match to the catalog. 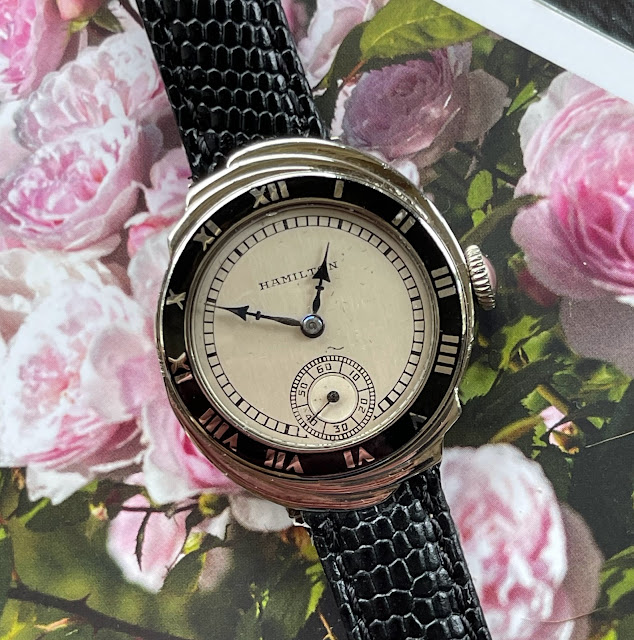 It was nice to be able to see a Spur in person and share with you.  Like a lot of rare models, I'm eager to send this one home.  It was mine for a day, that is enough.