The watch that started it all for me was my grandfather's Hamilton 992B pocket watch.  He had many jobs over his lifetime ranging from prison guard, to railroad man, to storekeeper.  When he passed away I inherited his pocket watches and for over two decades I carried them from place to place in an old cookie tin.

In around 2007 I decided to see if I could find someone to repair them for me.  I had watches in all shapes and sizes and in various makes from New York Standard, to Elgin, to Waltham, to Hamilton, and a few less common brands too.  I learned a lot from those pocket watches, starting with many watchmakers won't work on them, since not all old watches are serviceable, with the exception of higher quality brands like Hamilton.

It's a story that pretty much every Hamilton collector shares.

I was recently asked to work on another 992B, very similar to my own, so I thought I'd showcase it.

The 992B is a 21 jewel 16 size Railroad-grade model that was introduced in 1940 and produced through 1969.  That makes it one of the longest production run models, although the original 992 had an even longer run!  Railroad-grade watches had to meet several requirements, including the accuracy of a few seconds over a week.  Most pocket watches are not railroad grade.

Depending on the timeframe, you could purchase the 992B with different dials and different cases.  They also came with a special bakelite storage case. 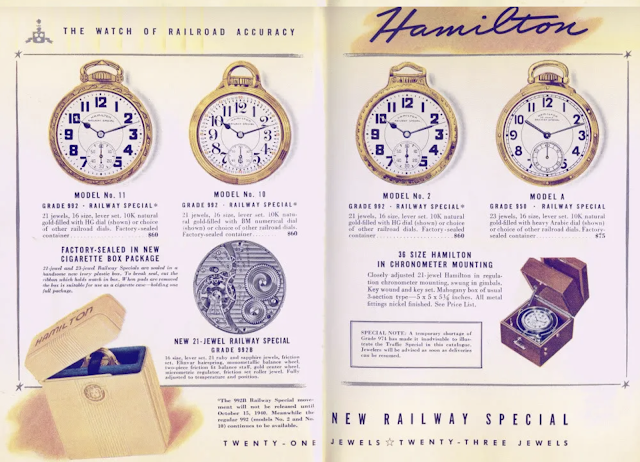 My project watch is interesting in several ways.  First, it's from the WWII era when production was supposedly dedicated to the war effort.  I say supposedly because the movement serial number dates to that timeframe but the movement doesn't say US Gov't, as I've seen in other examples.  Second, the case is made by Keystone and not marked Hamilton.  Keystone was a Pennsylvania-based case maker that made cases for Hamilton and other watch manufactures.  The case style is not one that is shown in the Hamilton catalogs for the 992B but it was used in the 1930s in a model called 'The Mainliner". 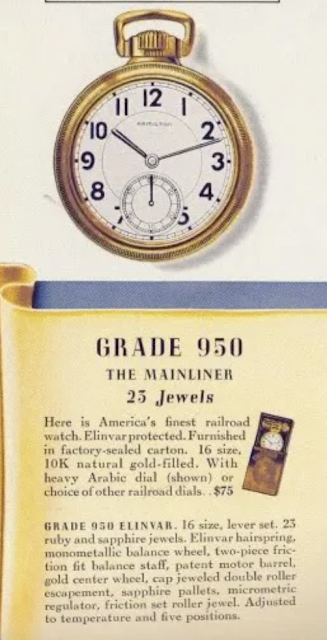 So how did it get into this case?  It doesn't really matter, but it's simply an interesting element that makes up this watch's story.  Maybe it was originally cased in a solid gold case that was sold for gold when times got tough?  Maybe the original case was damaged and needed to be replaced?

Of course, since this watch dates to 1944 and materials were in short supply, perhaps Hamilton cased it in whatever they had in inventory.

Only the original owner knows for sure.

As received, the watch looks well used but it's in good shape.  The crystal is scratched and there are some faint hairline cracks in the double sunk dial but nothing distracting or overly noticeable. 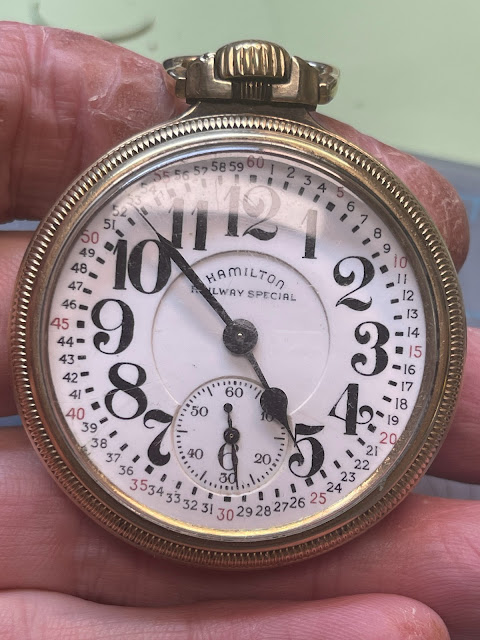 The case back is lightly engraved with a monogram so I'll leave the case unpolished so I don't risk losing the engraving. 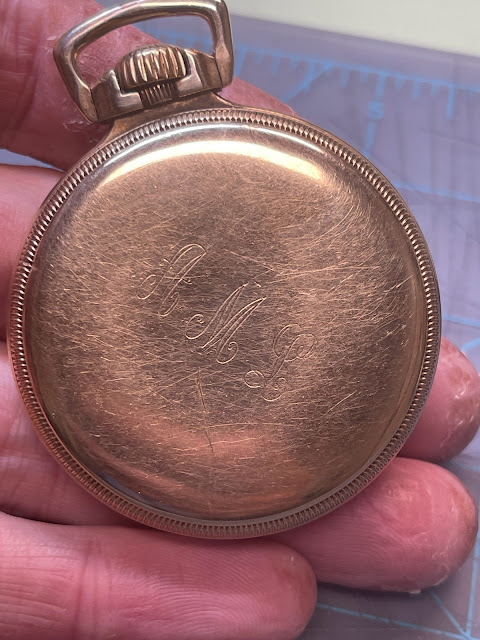 The two case screws are loose but otherwise everything appears to be in nice shape. 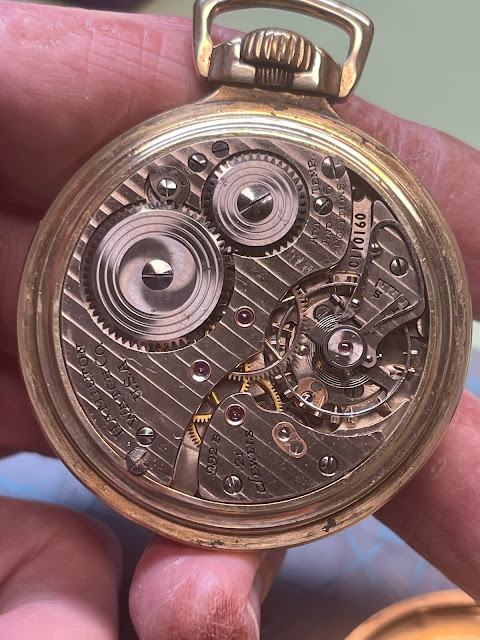 I usually don't wind a watch before I work on it as it's mostly irrelevant.  If it has issues I'll have to fix them anyway.  However, in this case I wanted to see what I was up against.   Dial up it runs okay, a little fast and with low amplitude.  I didn't wind it too much though, just enough to get it running. 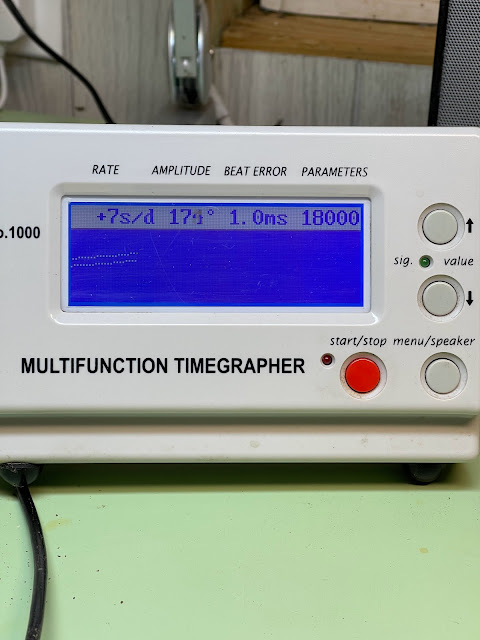 Pendant up it runs a little slower.  This is due to having more friction as all of the wheels in the gear train are riding on both ends of their axles, versus just one end.  Now I have a good baseline to compare to after it's been serviced. 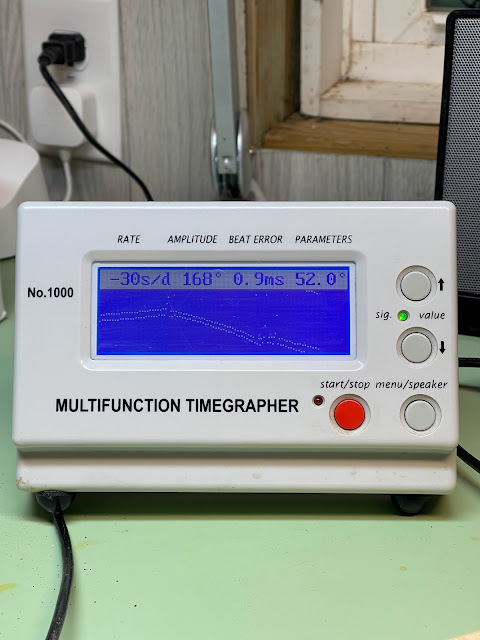 There are three dial feet that hold the dial in place but this watch is missing one of the dial foot screws.  I'm obviously not the first person to get into this watch. 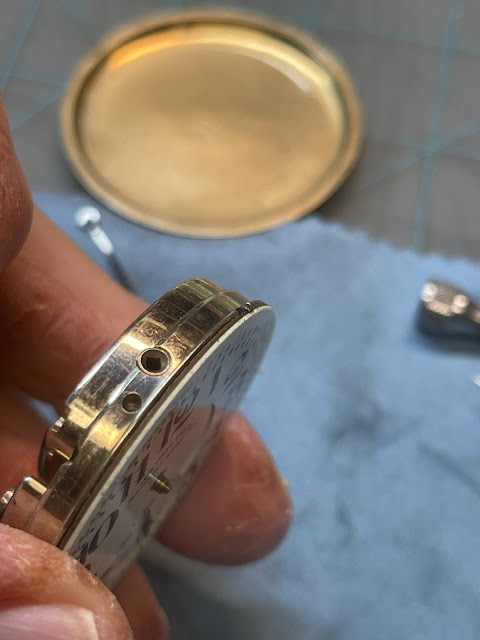 The owner mentioned a concern with the set lever being very close to the dial and hard to access to set the time.  You can see the set lever at 1:00 in the photo below.  When you slide this lever out, it moves the keyless works into the time setting position.  You need to scrape the lever with your fingernail to get it to come out.  You'll often see dials that are a little chewed up at the 1:00 position from decades of time setting. 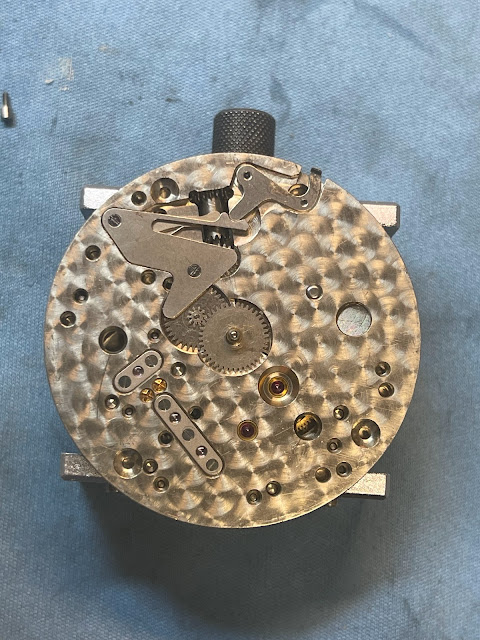 The set lever is held in place with a set lever screw, accessible on the back of the movement.  It's the darker screw nearest the edge of the barrel bridge.  You can see the set lever is slid out in this photo. 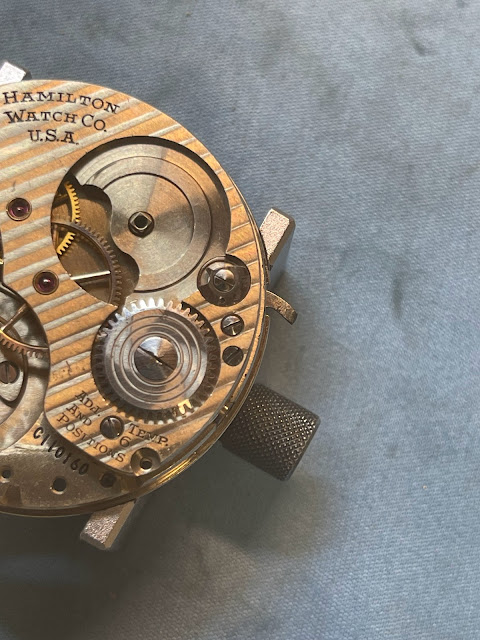 Comparing the design to an earlier 992 design, the 992 set lever is similar but the set lever screw is accessible from the dial side - so the set levers are not interchangeable. 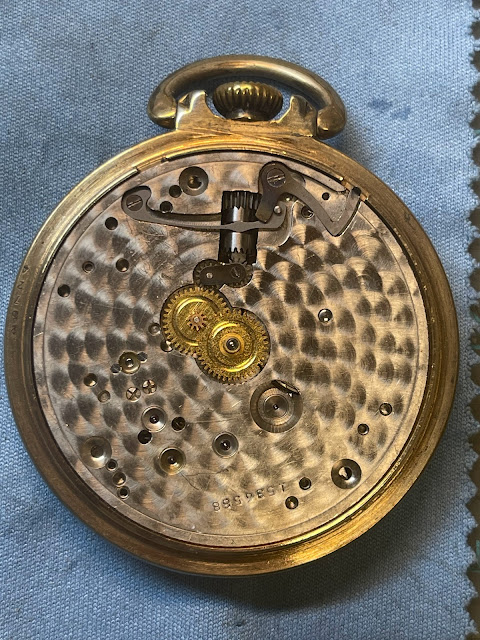 The mainspring is an older blue steel design.  It's probably set but I'll try it anyway, as changing pocket watch mainsprings is more difficult than wrist watch springs.  They are MUCH stronger. 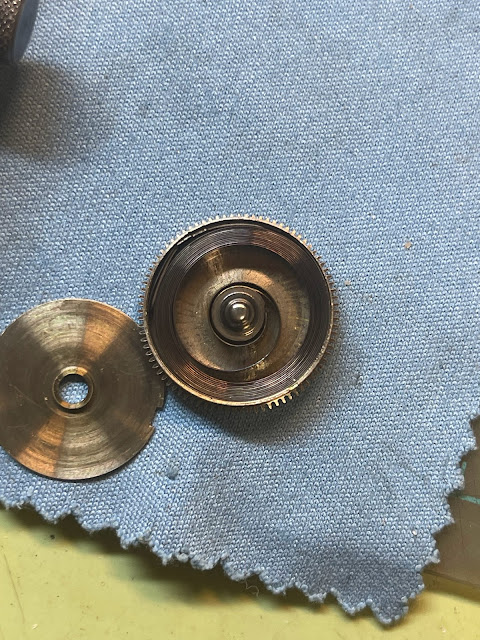 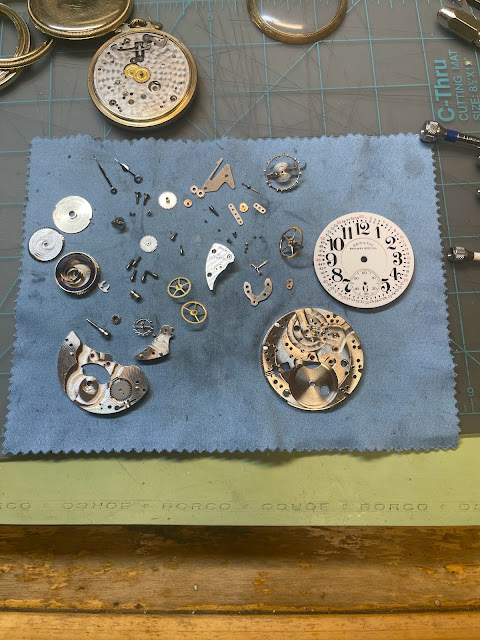 It's all back together.  Now I just need to wind it up and see how it runs. 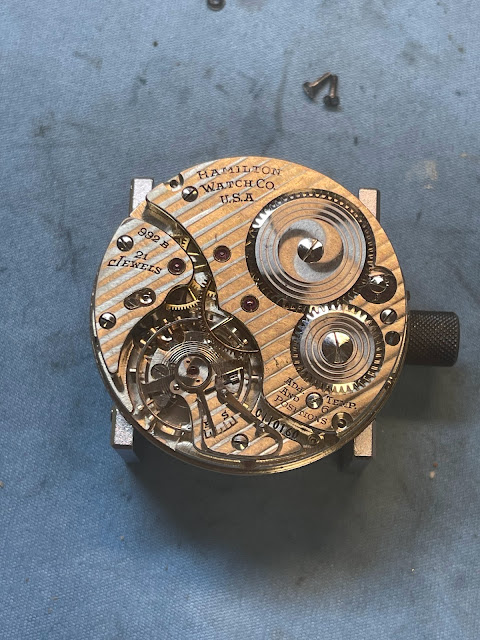 Fully wound it runs a little fast but the amplitude is still low.  I tried to adjust the original beat error before assembly but I moved it the wrong direction and made it worse.  I'll have to try again. 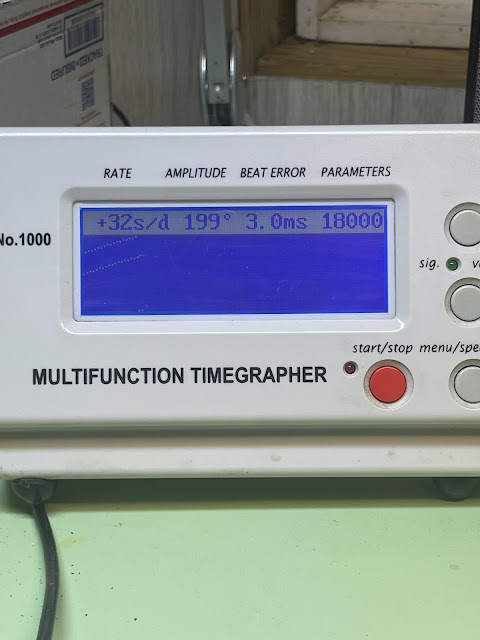 There... after several attempts I got the beat error back in line.  It's not perfect but getting from 0.8 to 0.0 is almost a matter of luck and every attempt risks ruining the balance.  The amplitude is too low though so I'm going to have to change the mainspring after all. 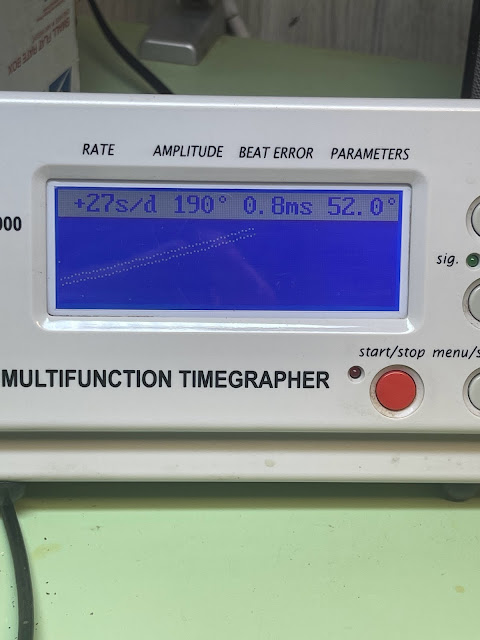 I have several choices of mainsprings.  I'm going to use the newest of the lot, as it's precoiled and small enough that I should be able to insert it into the barrel if I'm lucky. 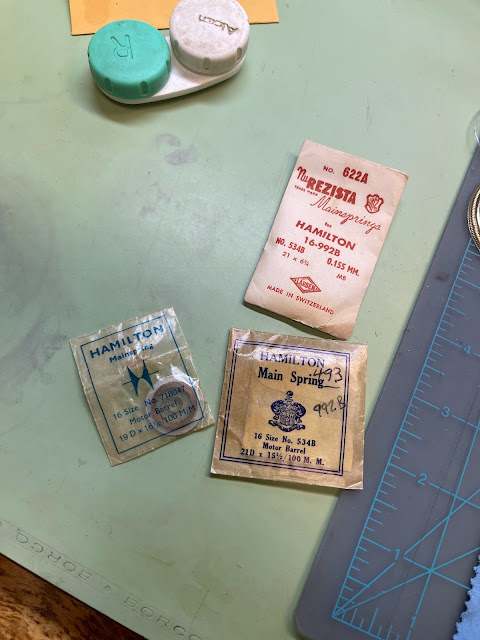 I have to pull the barrel bridge to get to the mainspring barrel.  Then I'll install the new spring and put it back together. 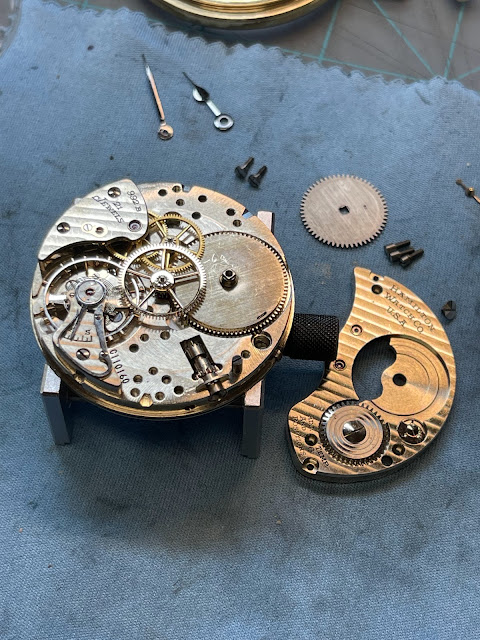 The old spring is "set" in a coil and you can see it's lost most of it's potential energy.  It obviously powered the watch enough to run but it wouldn't power the watch to run as long as a fresh spring will. 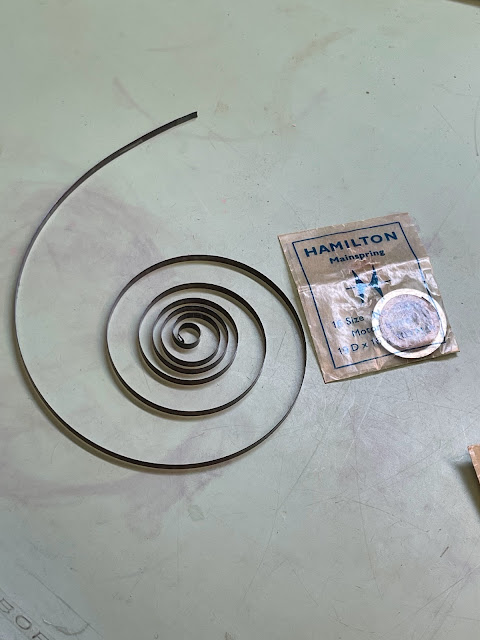 After a quick adjustment I have the reassembled movement running very nicely now.

It runs just as well pendant up. 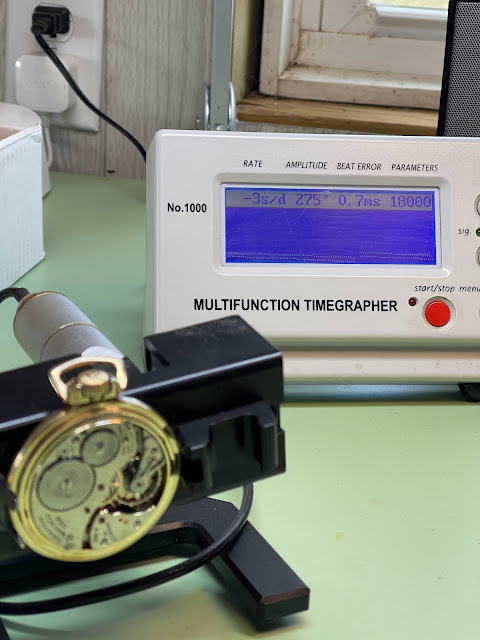 I installed a new glass crystal in place of the worn plastic crystal that came with it originally.  This watch now looks as good as it runs, and it runs great. 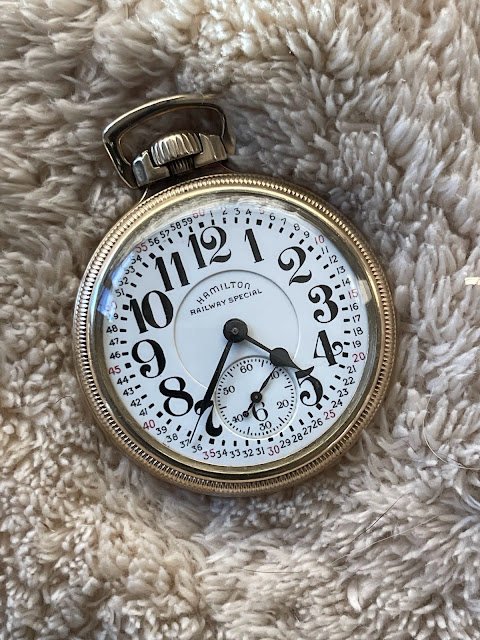