Sometimes watches present a mystery.  In many cases, the mystery is "what is what is wrong with my watch?"  Other times the mystery is "where did this watch come from"?  Watches can even present more than one mystery at a time.

The 1941 catalog didn't show prices, just a code for the price. 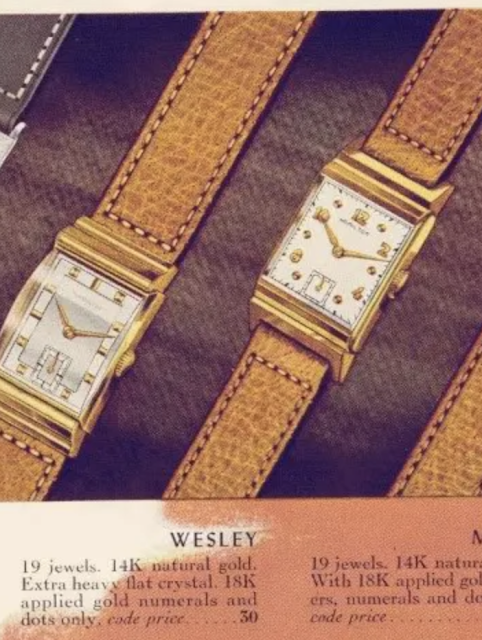 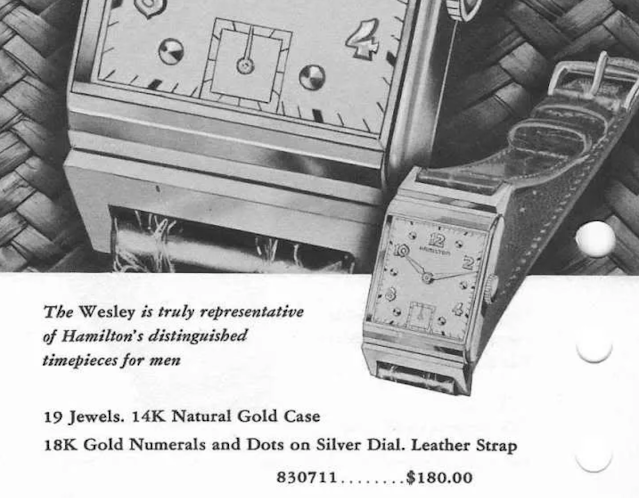 Perhaps the main reason it was so expensive is it came in a solid 14K gold case, and the case is fairly large, especially for a vintage watch.
My project watch is in extraordinary condition.  The case and crown are superbly crisp.  It's as if this watch was never worn. 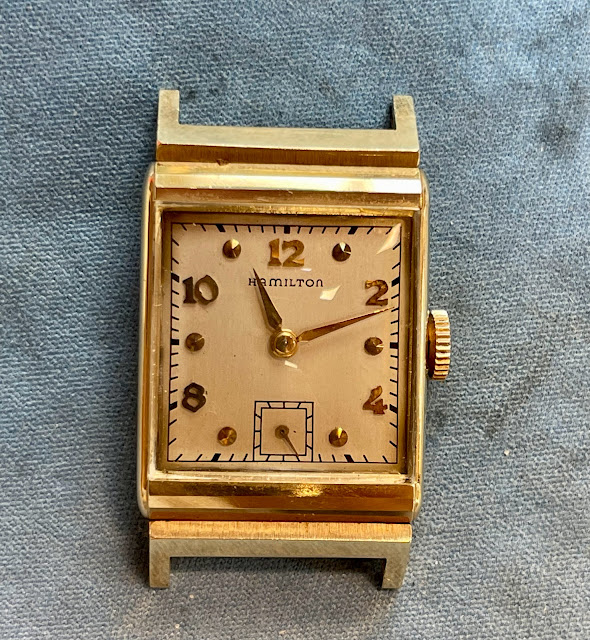 The first mystery is what's wrong with it?  When you wind the watch the hands just whirl around freely.  That's actually not very hard to explain.  When the hands whirl it simply means that nothing is stopping them from turning.  The part that stops the train from moving, and incrementally meters the power of the mainspring, is the pallet fork.  So either the pallet fork is damaged or the escape wheel.  I know it's after the 4th wheel because the second hands spins too.
The movement inside is a 19 jewel 982M.  By 1951 Hamilton stopped including the solid gold medallion on the train bridge and used an engraved circle with and M instead.  The movement appears to be in excellent shape, other than the obvious issue. 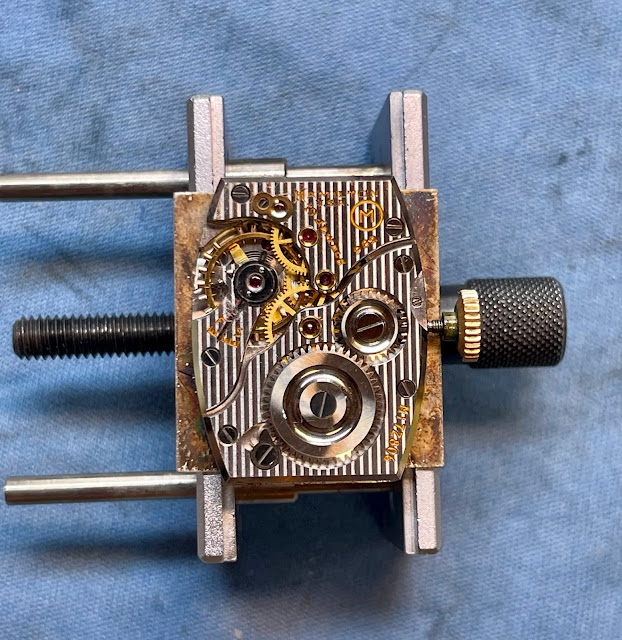 The inside of the case back includes the model name - the trend of adding the model name to the case back started in the early 1950s.  It's easy to spot a solid gold case - there is no verdigris.  The lack of any green residue is a sure sign the case is solid gold.  There are no service marks inside the case back.  I wonder if this watch has ever been opened since it left the Lancaster factory? 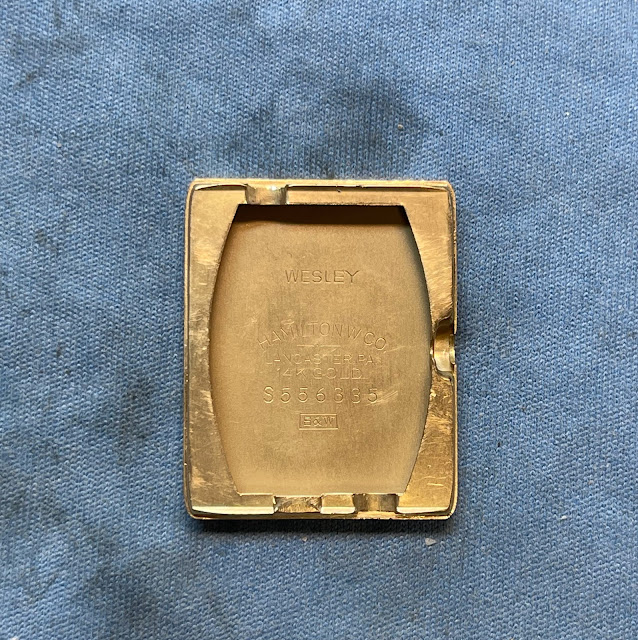 Here's another mystery, the back of the case has an engraved presentation dated in 1958 - seven years after the watch was made.  The engraving style is not consistent with Hamilton's awards division.  In fact this engraving is still very sharp, as if the watch was never worn after it left the engraver's machine. 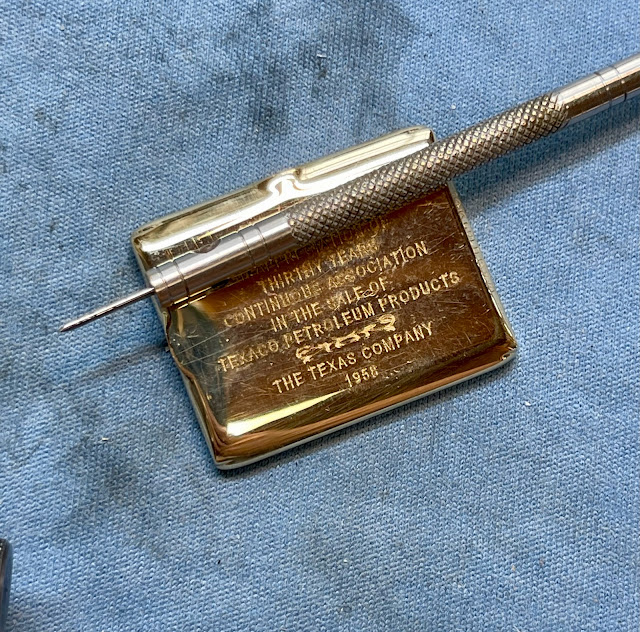 The dial has an interesting patina around the perimeter.  It's a great sign that the dial is original. 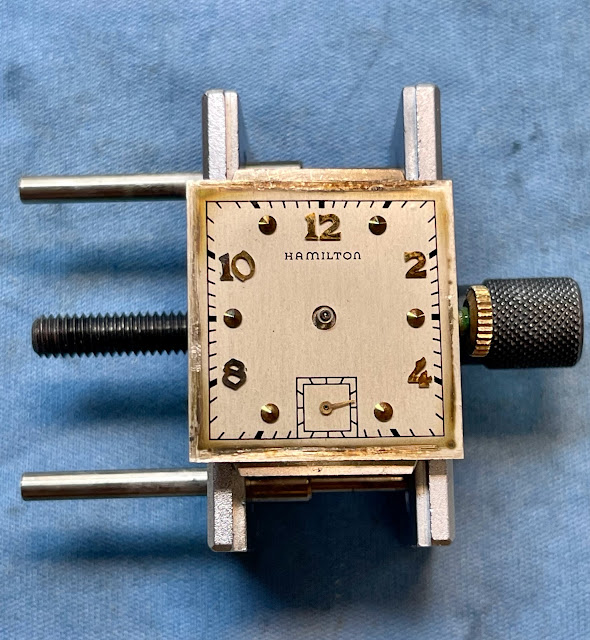 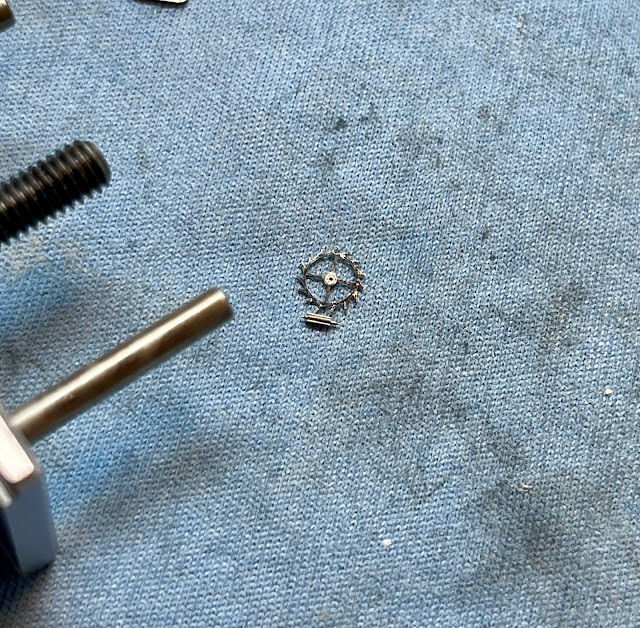 The barrel has very old grease residue around the arbor. 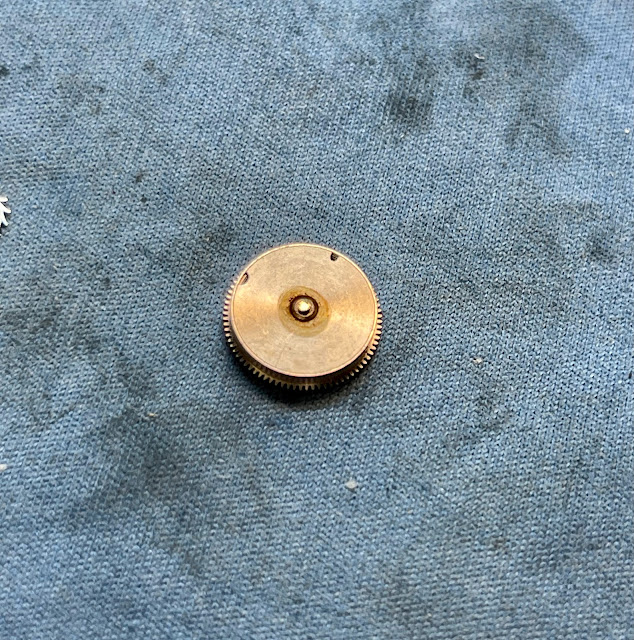 Sure enough, the mainspring inside appears to be original. 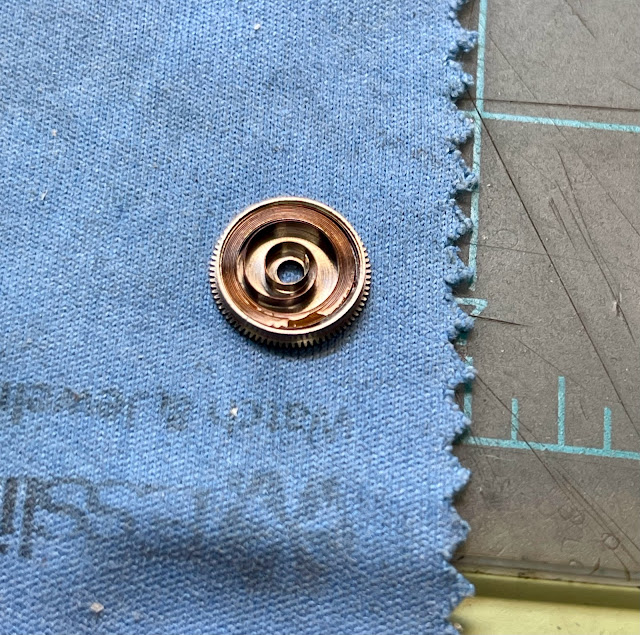 These old blue mainsprings eventually set in place and lose most of their potential energy.  I'll replace it with a fresh white alloy mainspring. 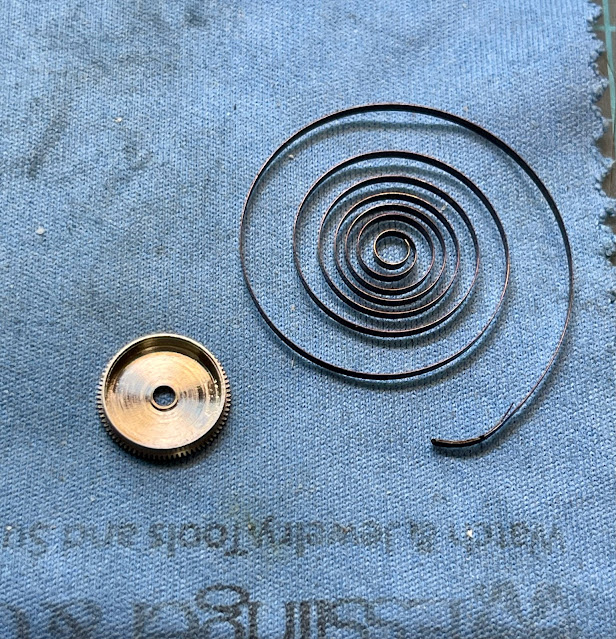 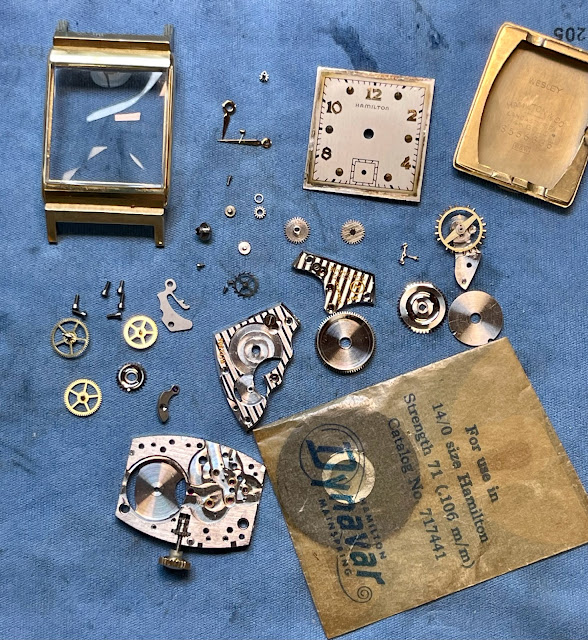 The watch is put back together and running with a nice motion.  Time to see how well it's running. 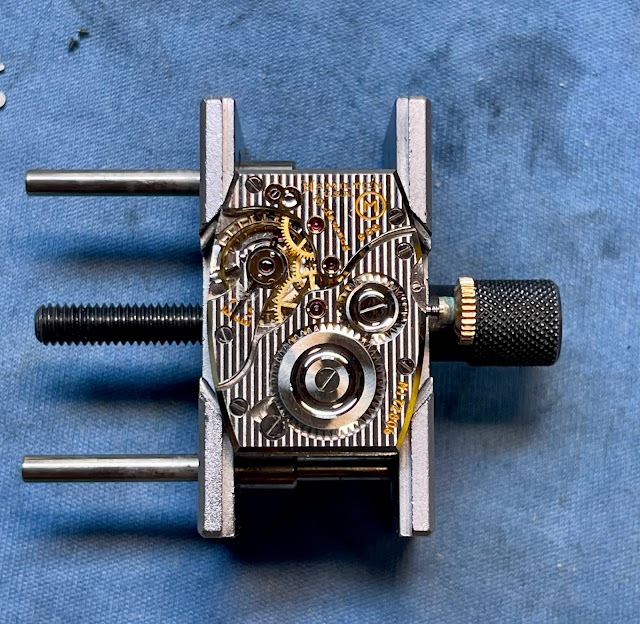 It's a wee bit fast at just over two minutes fast per day.  That should be easily adjustable, depending on the position of the regulator. 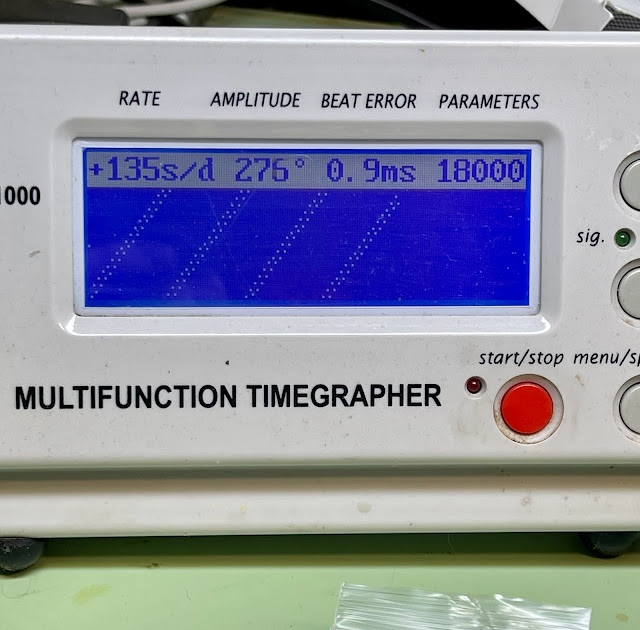 There... timing is right on the money and amplitude and beat error look good too. 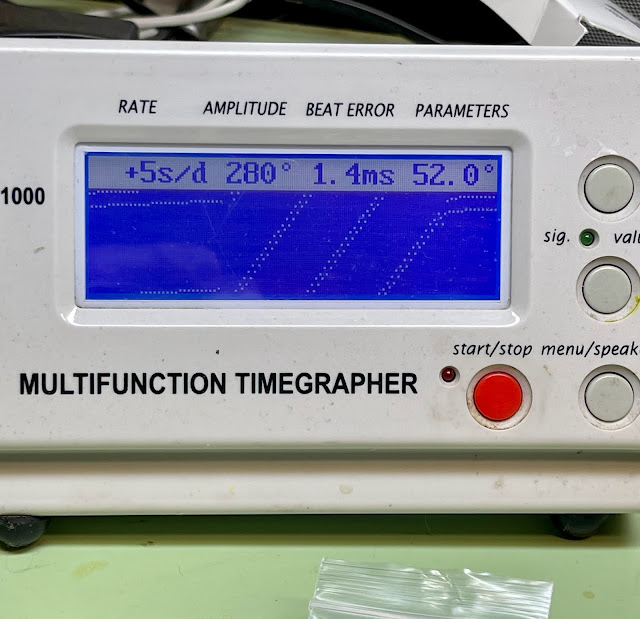 The finished watch looks fantastic, as if it just left the showroom floor.  This is a beautiful solid gold Hamilton and would be the pride of any collection. 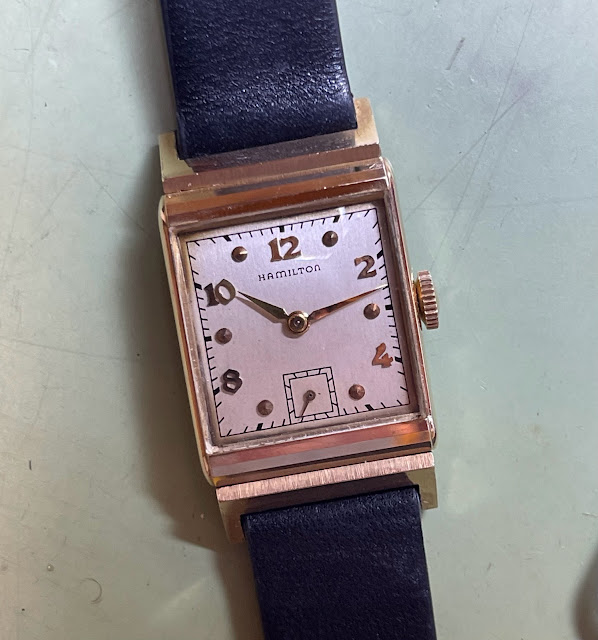