A lot of folks try really hard to put the right bracelet on their watches.  I think doing so really brings to life the design intentions originally created by the watch designers.  Of course, it also represents an even greater challenge in the world of collecting vintage watches.

Me?  I'll stick with a nice lizard strap, thanks.

Fine mechanical watches need regular maintenance and should be serviced every 3-5 years.  A service generally means the disassembly and cleaning of all the parts, then the oiling and lubing of friction areas and reassembly.  After servicing, the watch timing should be checked to make sure that it works as it should.  A lot of things can upset the timing of a watch.  Even a smudge of oil on the hairspring will throw off the beat.

To show you what it takes to overhaul an automatic, let's start with the A-502 as received.  This one is in nice shape overall.  This type of watch opens through the crystal. A special tool compresses a bunch of fingers around the circumference of the crystal and draws the diameter in so the crystal can be pulled off. 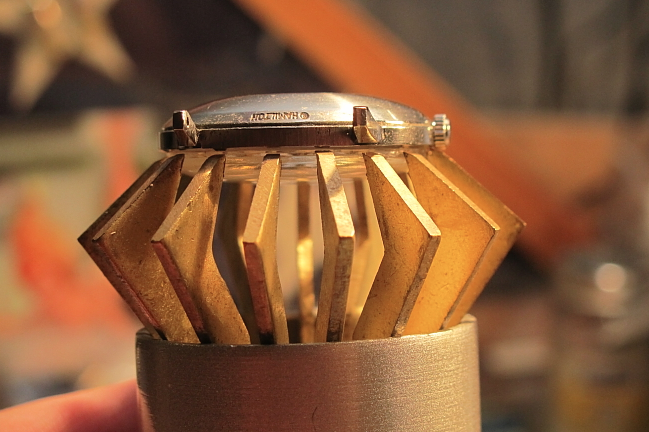 With the crystal removed the next step is to remove the hands. 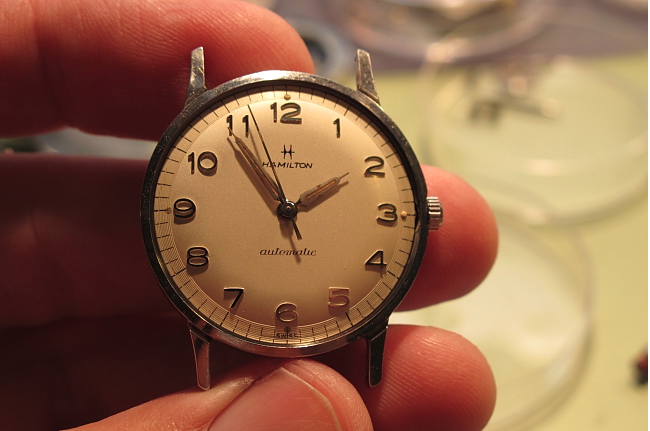 With the dial removed you can see the female portion of the two-piece stem.  The slot embraces the male portion still in the watch that is attached to the crown.  Getting the movement out is pretty tricky because you have to line everything up but you can't see it very well with the dial in place. 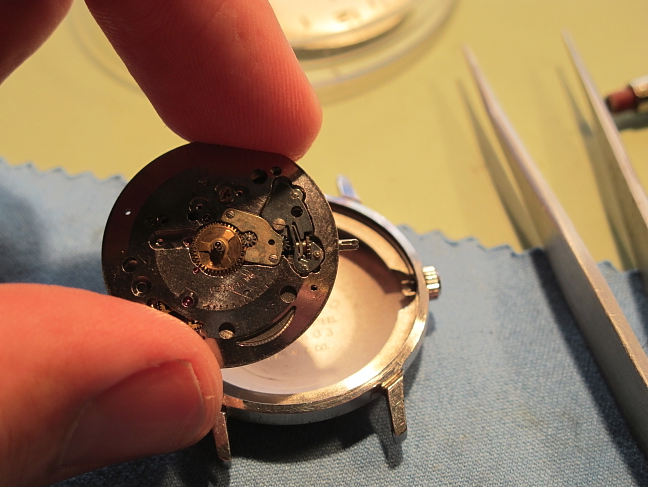 Next step is to remove the hour hand wheel and the canon pinion (that the minute hand attaches to). 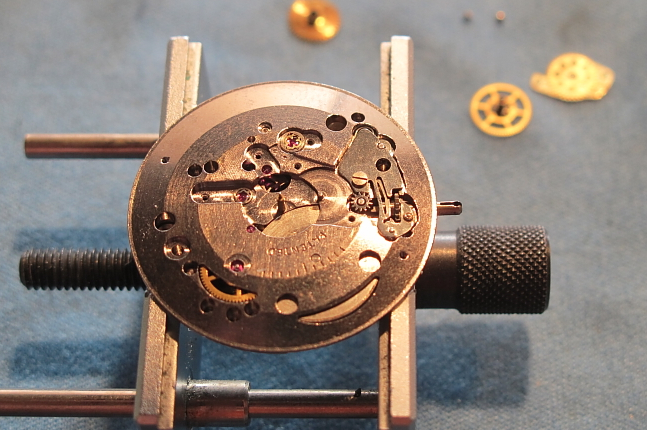 Flipping it over, you can see the rotor on the back of the movement.  As this weighted rotor swings around it winds the watch using a gear train beneath it.  Two screws hold it in place - you can see one of them at about 9:00. 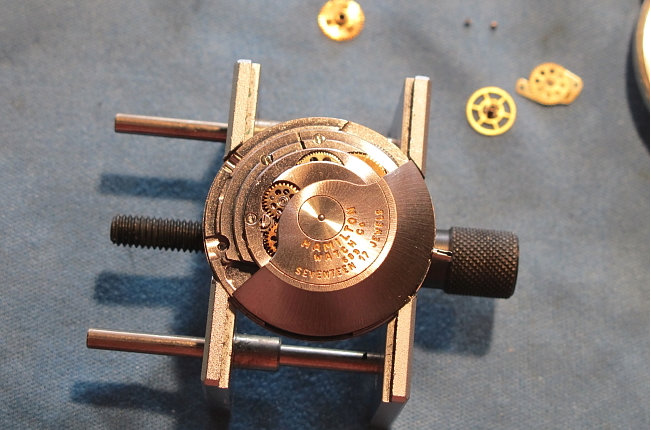 With the rotor removed the watch now looks like a typical manual movement - albeit with a few extra holes here and there. 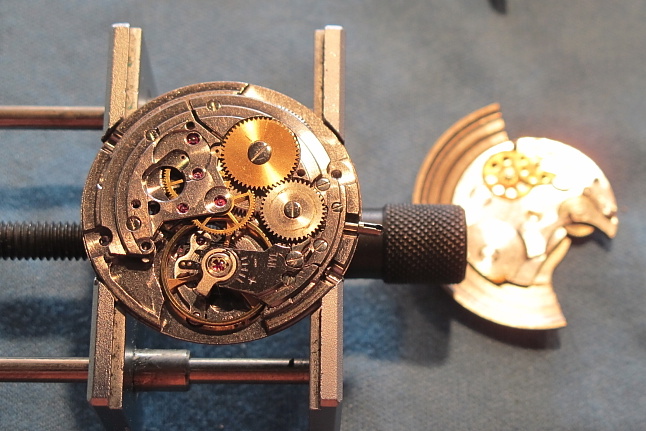 There are a bunch of parts still attached to the rotor.  They should be removed, cleaned and oiled like everything else. 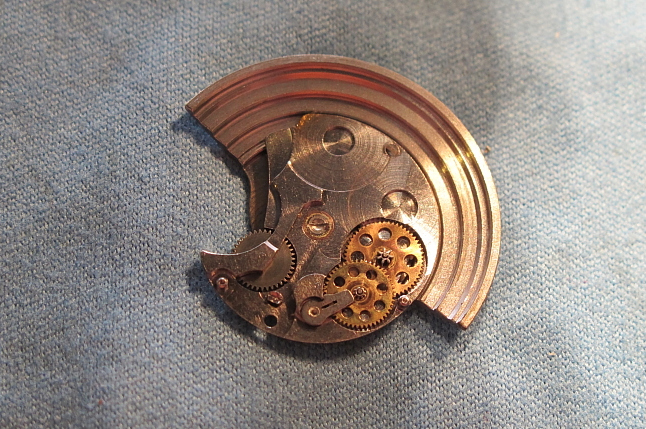 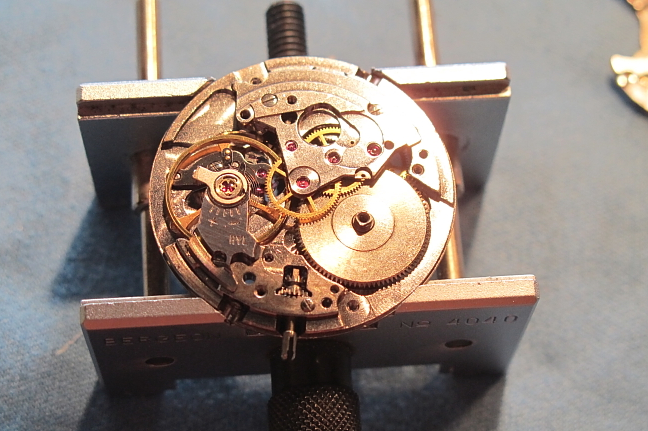 The train bridge comes off next, revealing the four wheels.  Once they're removed you only have the balance assembly and the pivot fork left on this side. The balance is removed and now there's only one screw left.  It holds the pivot fork bridge in place. 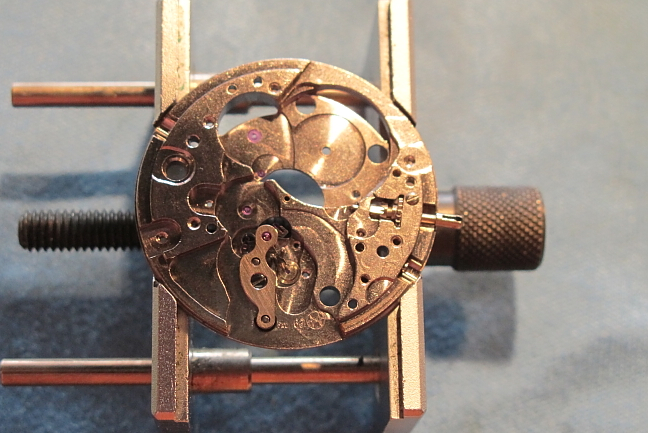 The rotor can be fully disassembled too. 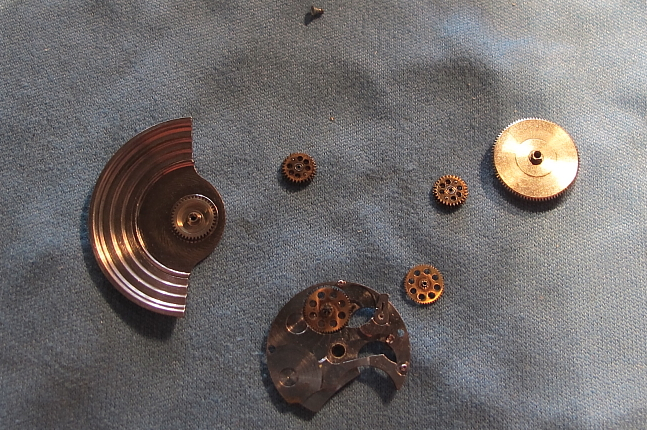 Once all the parts are cleaned in the ultrasonic cleaner they must be dried. At this point we're ready for oiling  and assembly. 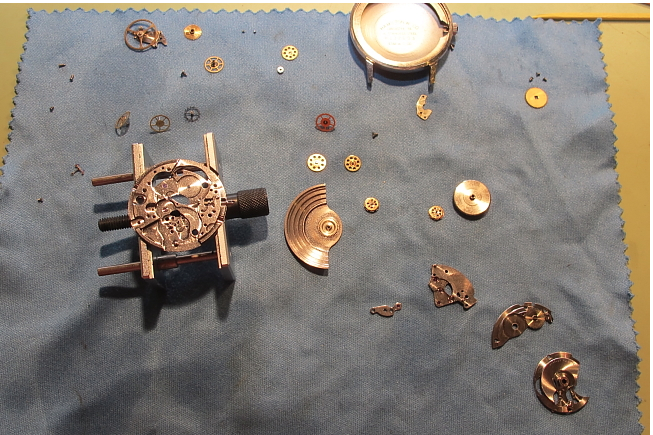 Every bearing surface gets a small droplet of Moebius oil.  Reassembly follows the reverse of disassembly, except the balance goes on a little later.

First step is to put the pallet fork back in. 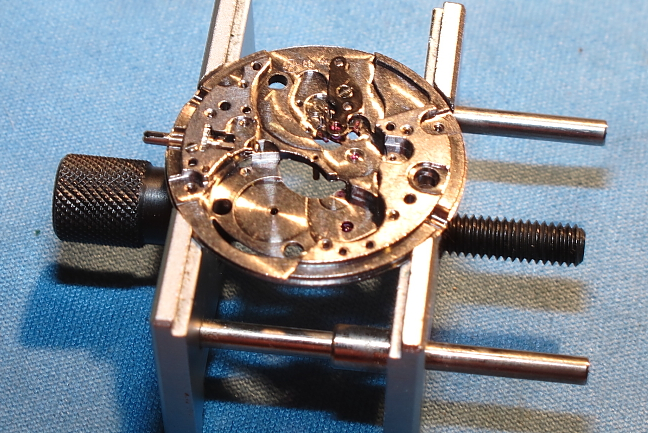 Now all four wheels are re-installed and I put the mainspring barrel and barrel bridge back on to aid the next step. 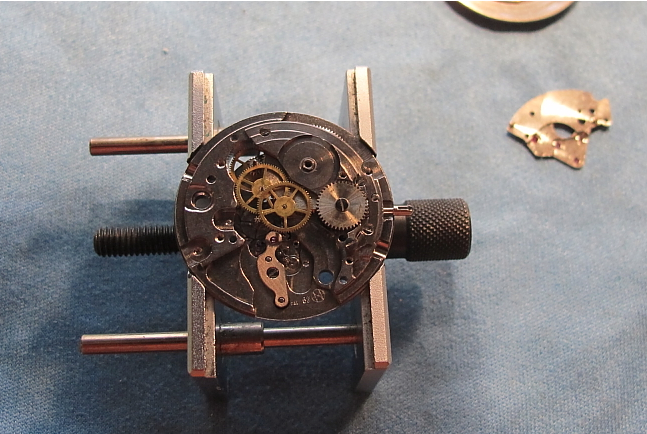 The train bridge connects all four wheels and getting each of the four pivots to line up with their respective jewel takes a steady hand and a lot of patience.  Each jewel is oiled before installation.  The reason I put the balance on later is so that I can see which wheels need to be aligned and get my tweezers in there to move them.

I always breath a little easier at this point. 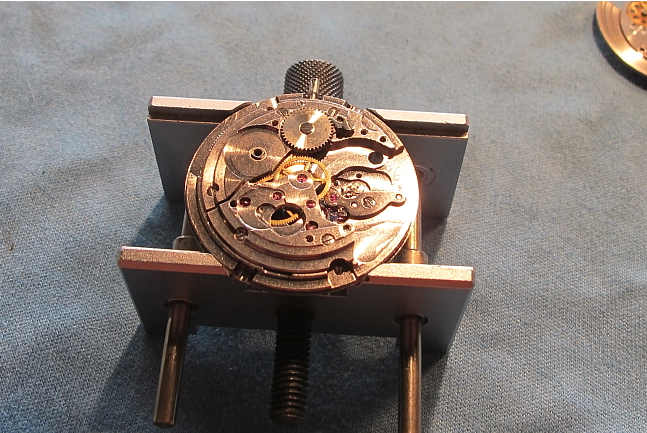 I put a little tension in the gears so that when I put the balance assembly back on the watch will start running.  Then I know everything is lined up correctly. 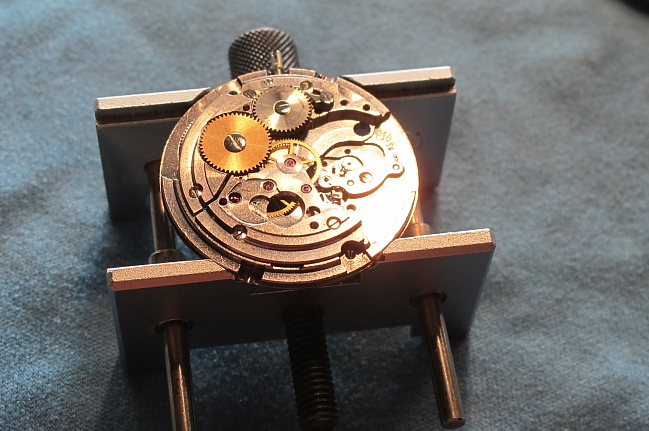 With the balance back on and the watch running, the rotor assembly goes back in it's proper place. 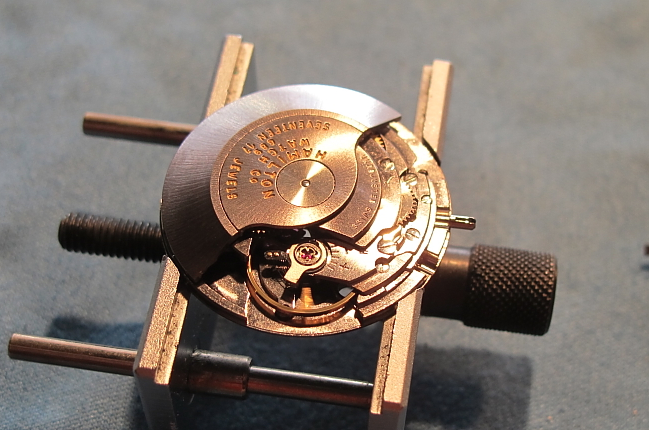 On the front side, all the parts of the "keyless works" are reinstalled and lubed. 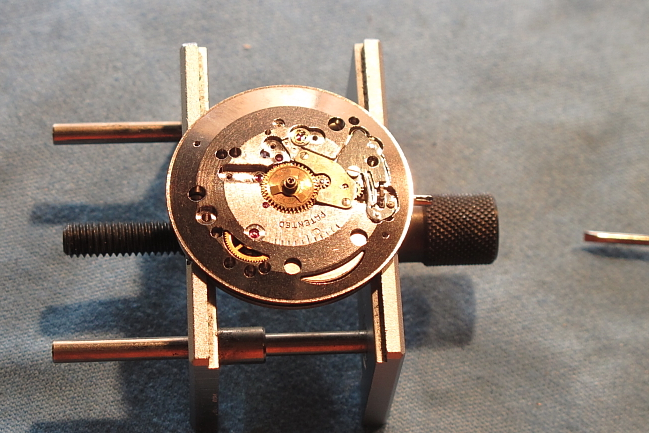 Now the watch is ready for the dial.  Note you can just see the female portion of the stem. 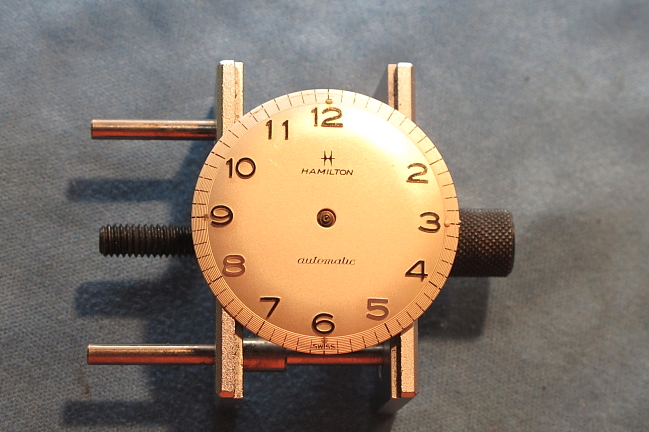 Putting the movement back in the freshly polished case is as much a pain as getting the darned thing out to begin with.  With patience and persistence it all goes back in place eventually. 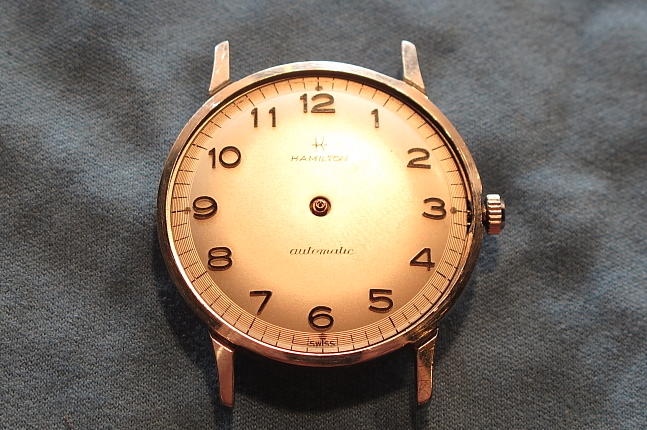 Last step is to put the hands back on and the crystal. 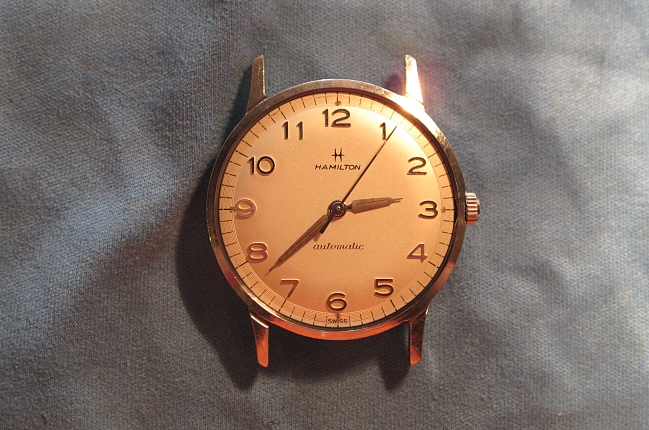 I check the timing when I reinstall the balance but I also check it when everything is back in it's proper place.  15 seconds fast per day... not too shabby.  A lot of things can effect the timing of a watch and I try to stay within +/- 30 seconds per day.  This one could probably be adjusted even closer to zero but that would require taking it apart again - and the risks from that outweigh the benefit 15 seconds per day. 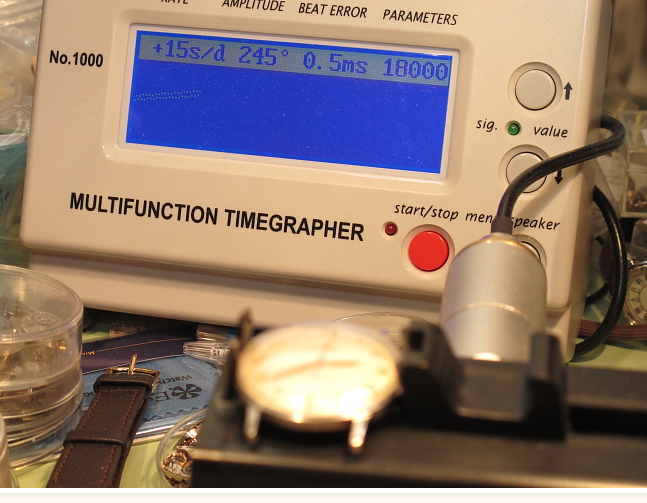 And that's it... good to go for another five years or so.