The 1939 Hamilton Winthrop was only produced for two years and it's one of the last models to offer a variety of different dials.  Lots of 1930's watches were available with three (or more) different dials... usually a luminous dial, AGN dial and a black enamel dial.  The Winthrop came with an AGN dial as shown in the catalog ad but also a black enamel figure dial and a two-tone gilt and coral gold dial.

The case on the Winthrop is 14K yellow gold filled.

I recently overhauled a 1939 model with the two tone gilt dial.  I'll show you how it went.

As received, the watch was in good overall shape... just a little dust on the dial.  It was running but getting a watch serviced while it's still running is a good idea... just like you don't wait to service your car until it has broken down.  Servicing a running watch keeps it in good running order. 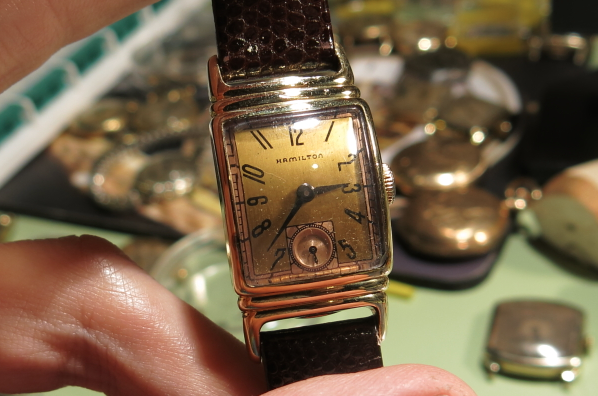 This shot really shows the details of the two tone dial. 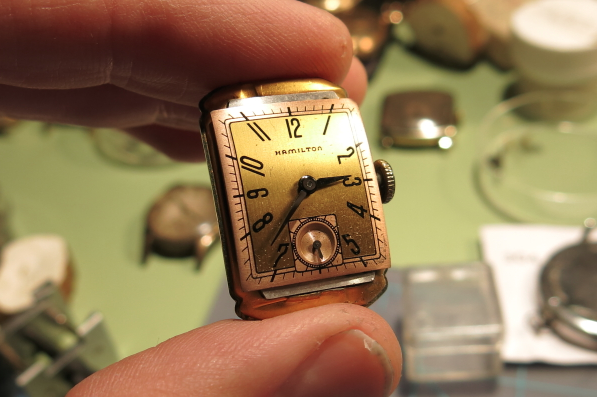 Once the hands are removed, the two dial feet screws on the side of the movement are loosened so the dial can be taken off. 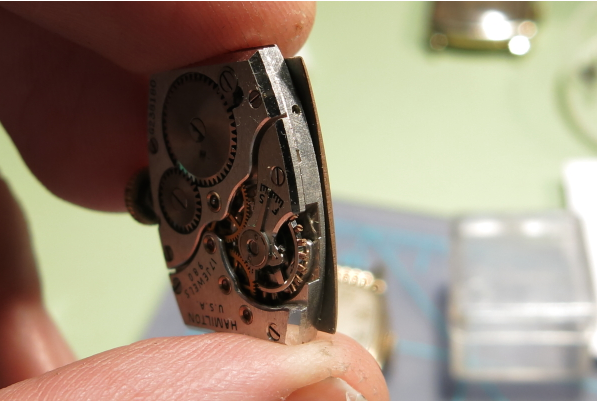 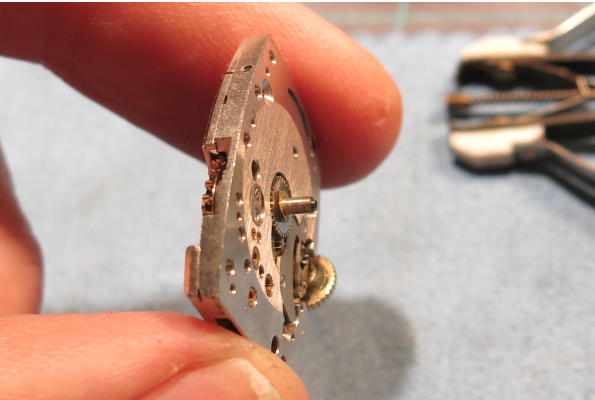 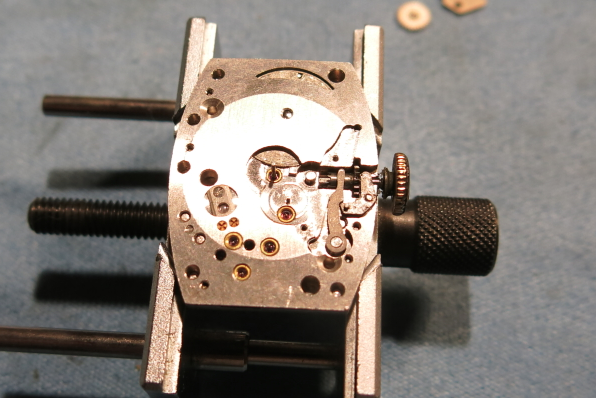 Switching to the back, the larger ratchet wheel below drives the mainspring.  Removing the two winding wheels and the barrel bridge will expose the parts below. 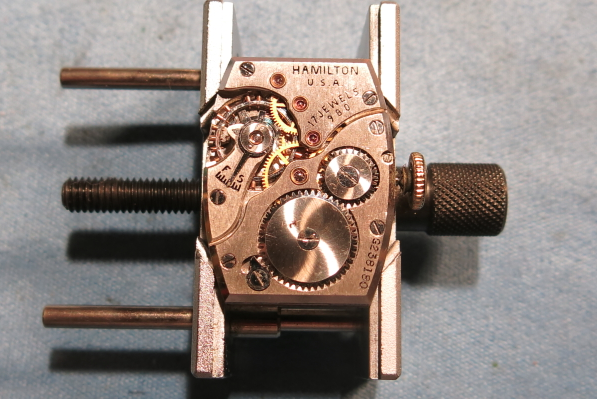 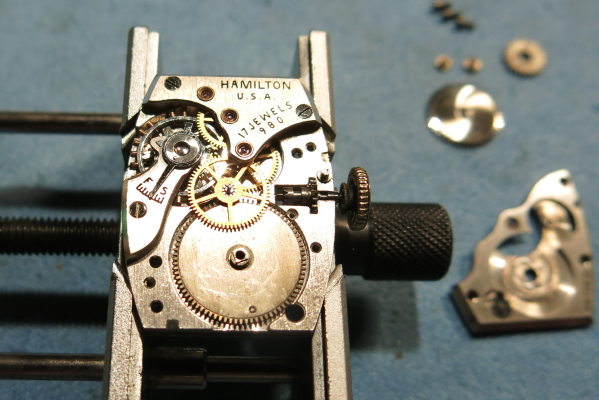 Here all the wheels are exposed and ready to be removed.  Next to come out is the balance assembly. 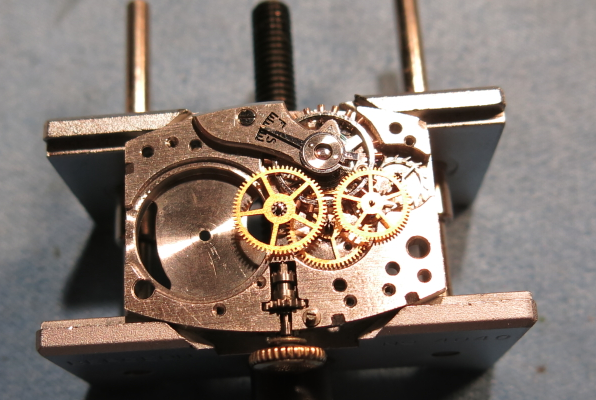 The last part to come out is the pallet fork. 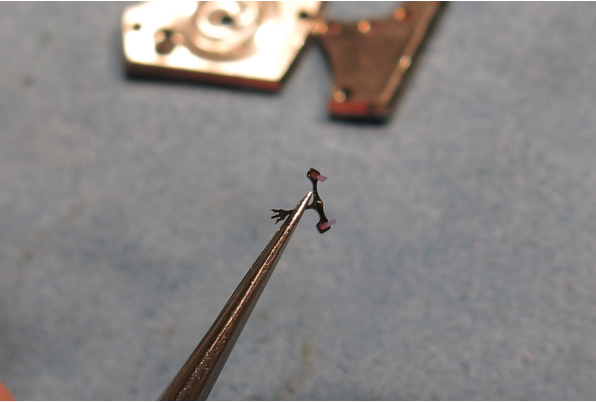 While everything is in the ultrasonic, I will clean up and rewind the mainspring.  This spring is a nice white alloy and has plenty of life left in it.  In this shot, the spring is in the mainspring winder.  You can do these by hand too - but that can be very hard on the fingers.  A winder makes short work of it. 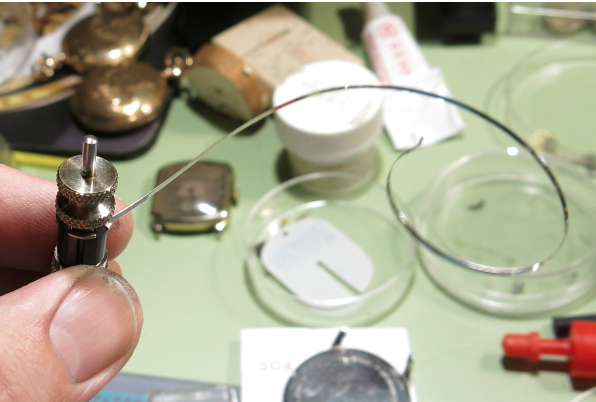 Here, the spring and arbor are back in the barrel.  There's a cover that will go on after a little mainspring grease is applied. 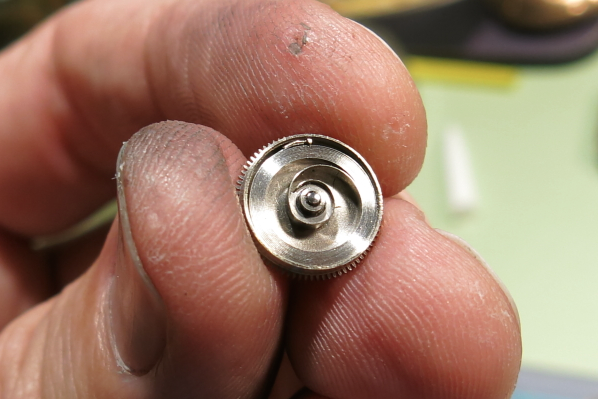 Now all the parts are cleaned and set out to dry before final assembly. 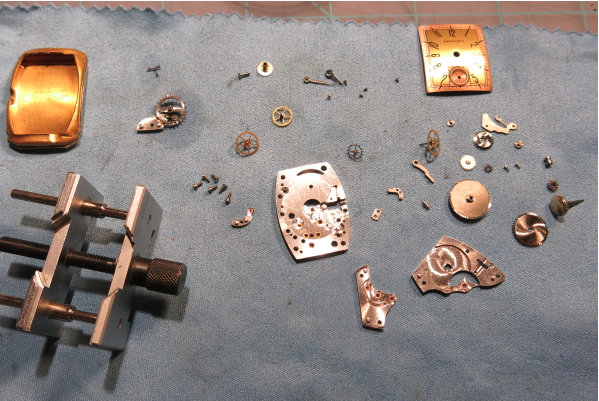 Reassembly is basically the opposite of disassembly.  The first things back on are the pallet fork and the wheels. 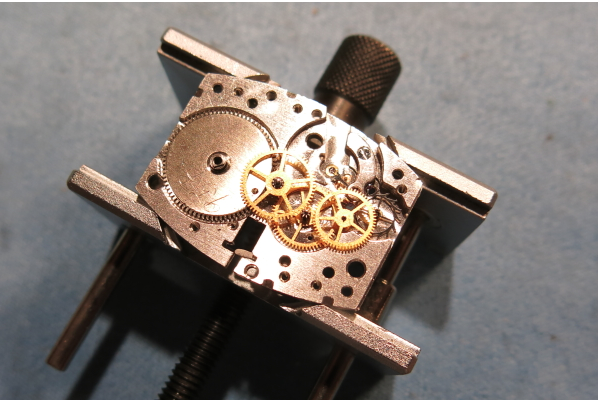 Both bridges go on next and once everything is properly seated, a slight nudge of the center wheel with tweezers should easily move the pallet fork - that confirms everything is in its proper place. 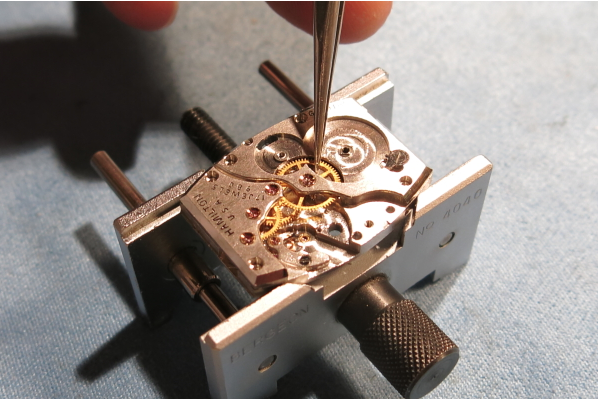 The winding and ratchet wheels go on next, after a little lubrication.  The thread on the smaller winding wheel's screw is left handed - so you turn it the opposite direction to tighten it than typical screws. 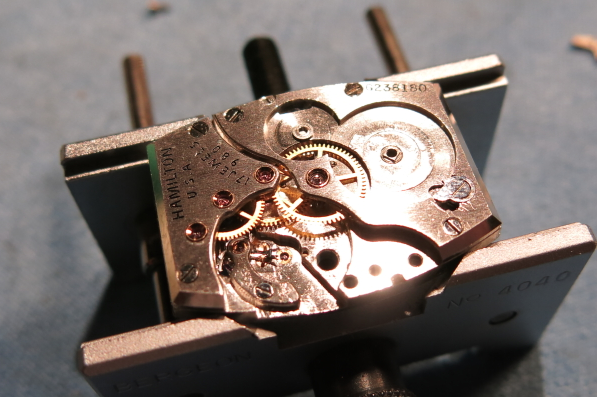 On the front side, all the parts for winding and setting are reinstalled. 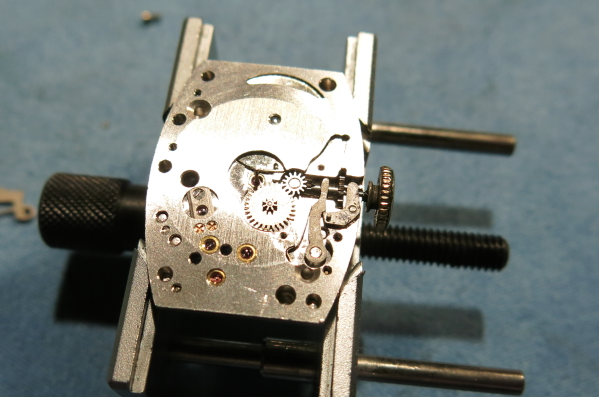 The dial feet screws usually fall out in the ultrasonic so they need to be reinstalled.  As you can see in the shot below, these screws are tiny but very important. 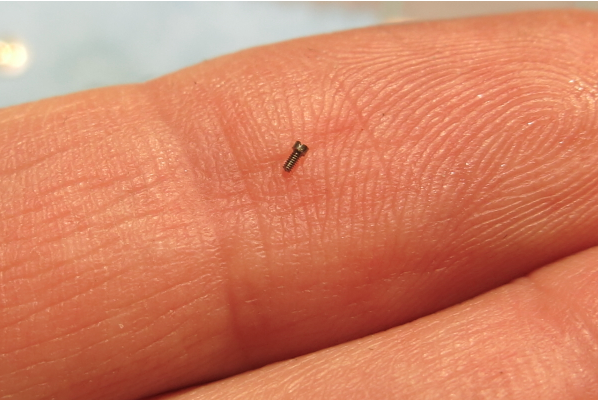 With the mainspring wound up a little the last thing on is the balance assembly after a droplet of oil goes into the jewel. 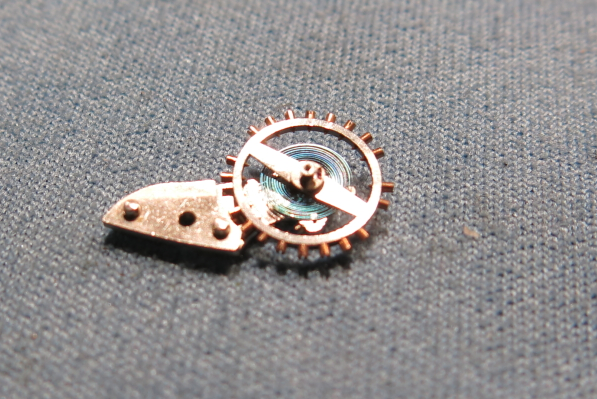 With the watch on the timer, it looks to be running pretty strongly but a little fast at 34 seconds fast per day.  That's not bad, but I'd like to get it a little better.  A little tweaking to the regulator will slow it down. 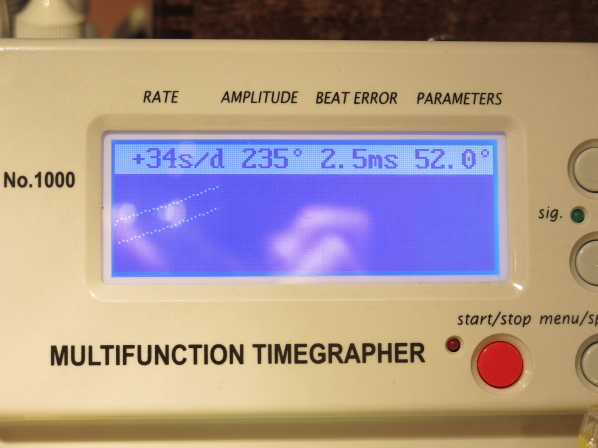 Now it's running 14 seconds fast per day with good amplitude.  I like to leave them running a little fast per day as they will slow down a little when the mainspring winds down. 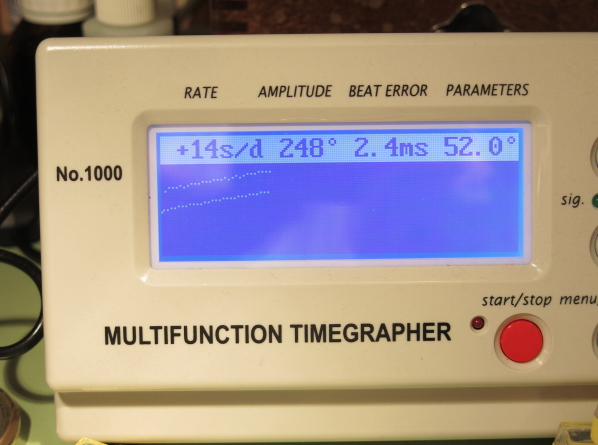 With everything running fine, the dial and hands go back on. 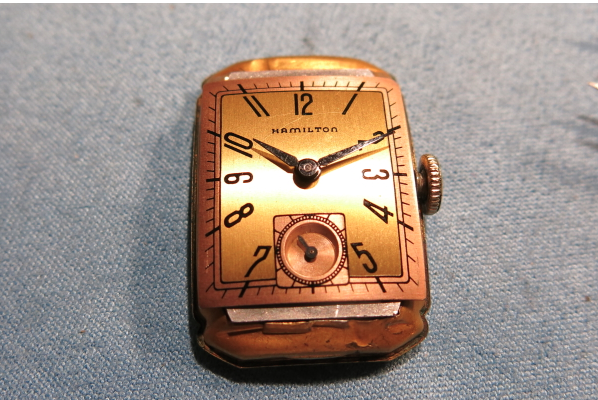 And here it is all back together and ready for a few more years of trustworthy service. 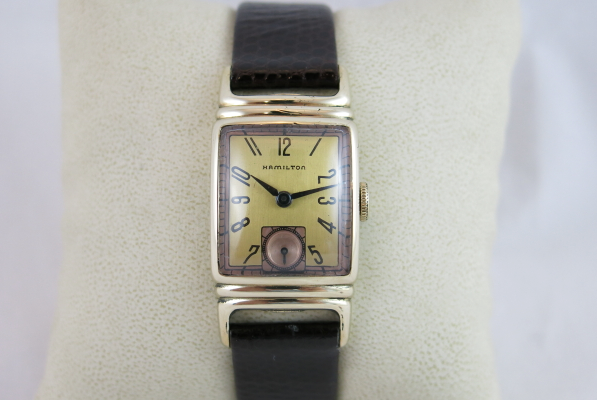 And here's an AGN dialed version of the Winthrop that I recently restored.  It's also a very nice looking watch. 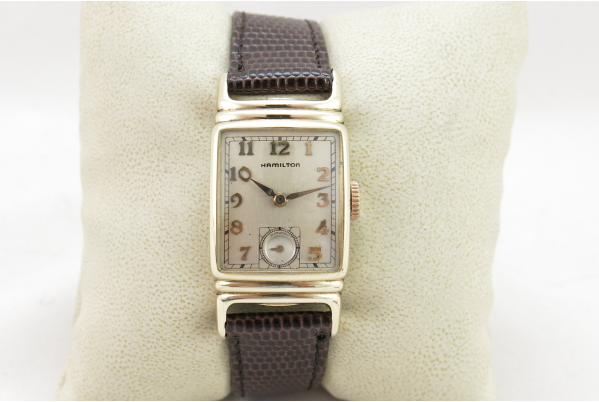