The second of two Hamilton models to be named "Whitman" was released in 1956 and produced for three years.  The original Whitman was made in 1940 only. 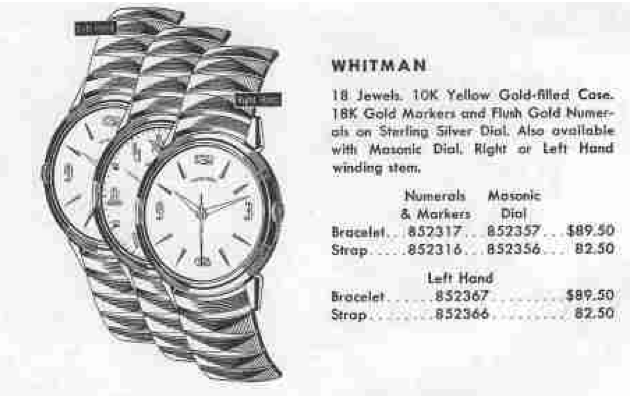 The Whitman comes in a beefy 10K gold filled case.  The sterling silver dial has solid 18K gold markers and numerals that are "flush gold" and look like gilt to me.

Like several other 1950's watches, you could also get the Whitman with a Masonic dial and a left-handed version was also available.

Under the dial is an 18 jewel, 8/0 sized 735 movement - although you might also find a 748 if it was an early model.  The major difference between the 749 and the 735 that replaced it is addition of shock jewels for the both ends of the balance.  So the 735 is a much more robust movement when it comes to being dropped or banged into door jams.

I just picked up a Whitman from an online auction.  Although it ran, it did so very sluggishly so an overhaul was definitely in order.

As received, it looked pretty good.  The crystal was very scratched up but since it's acrylic it could be buffed up and I did that first. 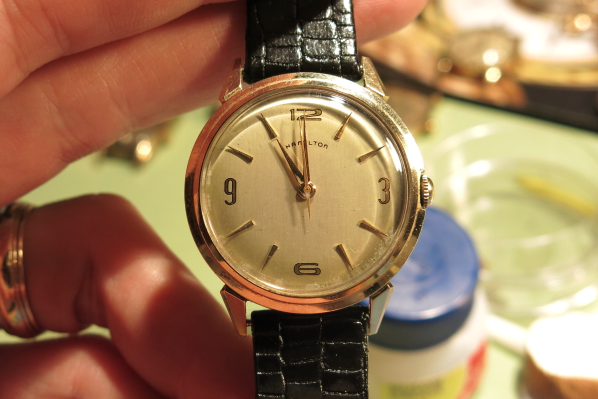 The edges of the dial are worn a little, I suspect this is from rubbing against the underside of the bezel.  I'll try to clean it up a little bit but this is mostly covered by the bezel and not seen when it's installed.  The markers on the dial are like triangular slivers and the pointed tips actually stand proud of the dial like thorns. 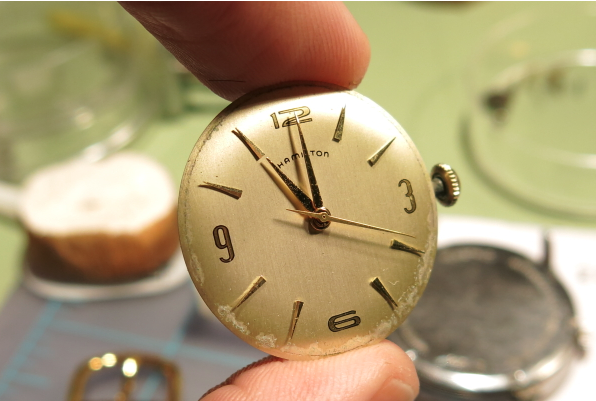 Here's a shot of the back of the movement.  The first thing to do is to pull the hands and remove the dial. 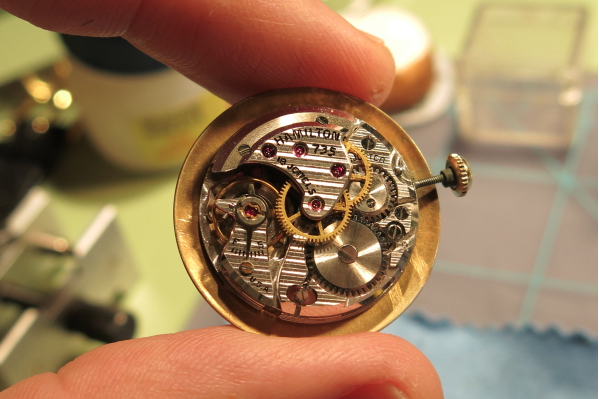 With the dial removed, the hour wheel and cannon pinion need to be removed in order to pull the center wheel from the back of the movement. 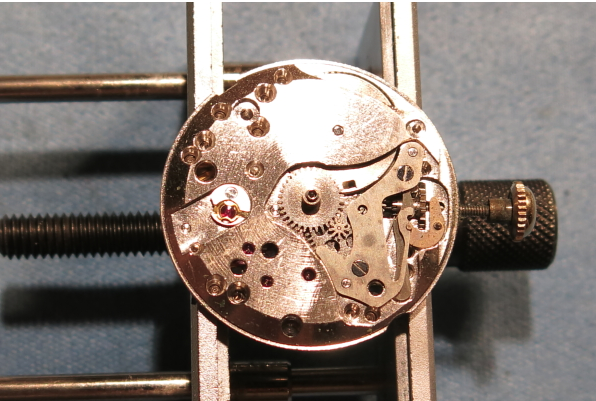 Flipping it over, the tension needs to be let off from the mainspring before anything is done on the reverse.  On this movement, the first thing that comes off is the train bridge that accommodates four different wheels.  Only two screws hold it on.

The 748 / 735 / 736 movement is arguably the most challenging manual movement to re-assemble.  So I always wince a little before I loosen the first two screw as I imagine a surgeon does before he / she picks up a scalpel. 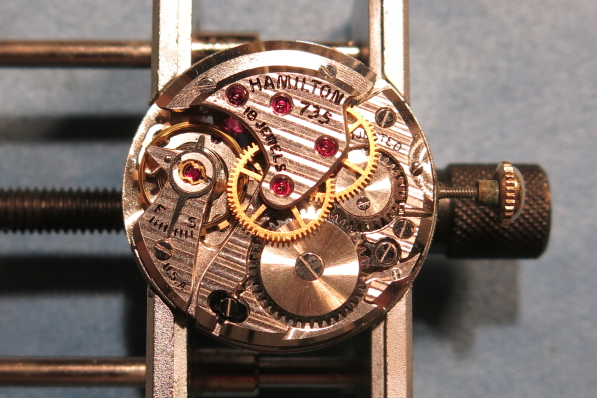 Here's a nice shot of the train bridge.  The four pink circles are the jewels to support each wheel's axle. 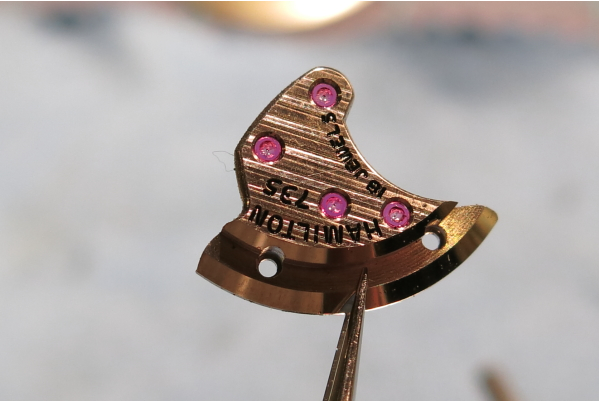 With the train bridge removed, the escape wheel, fifth wheel, fourth wheel, and third wheel can all come out. 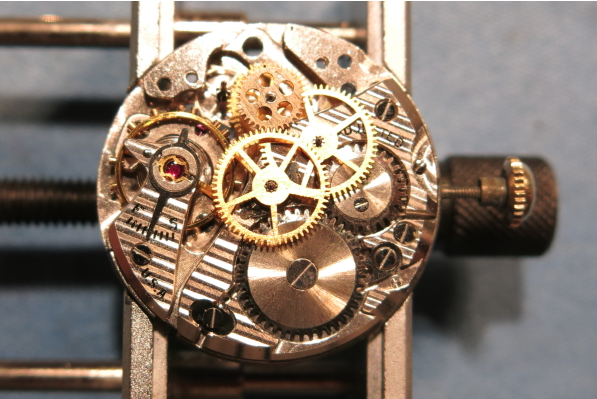 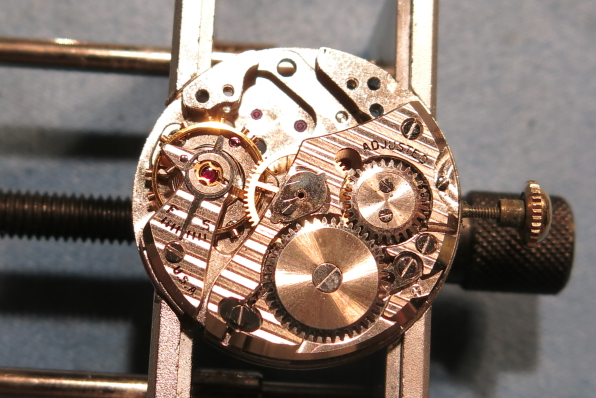 Now the mainspring barrel and the center wheel can come out.  One screw holds the balance assembly in place.   That can come out now too. 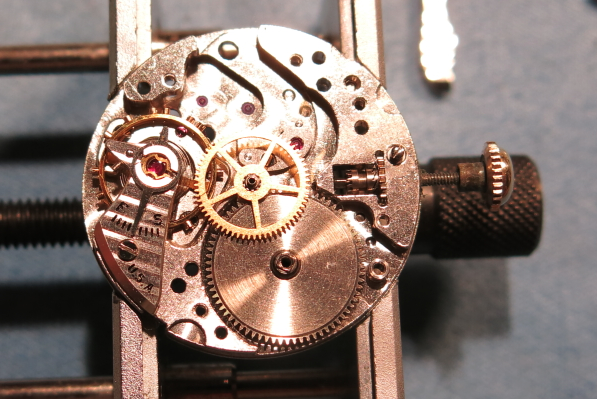 The last thing on the back of the main plate to come off is the pallet fork.  Two screws hold it in place. 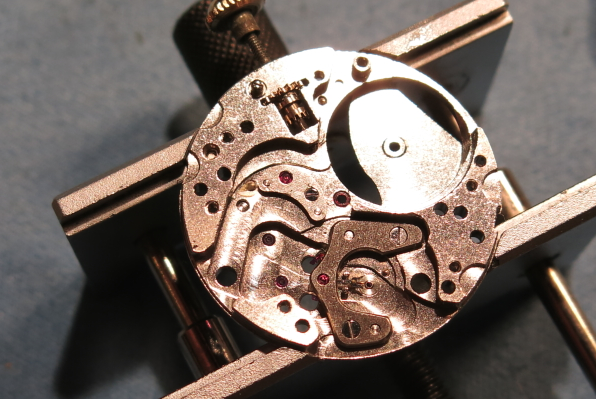 Finally, on the front the set bridge comes off to expose the set wheel and minute wheel beneath. Everything is now disassembled and ready to be cleaned. 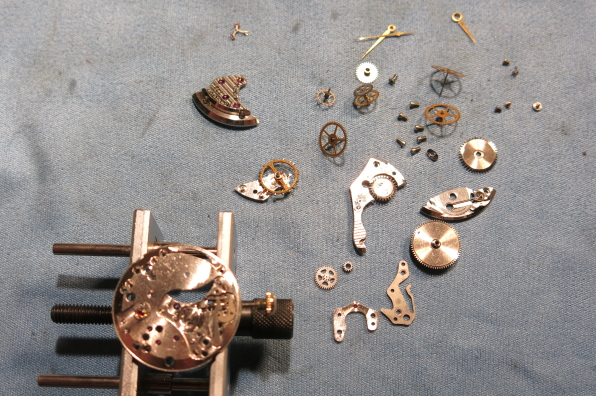 All of the parts go into the first jar with cleaning solution. 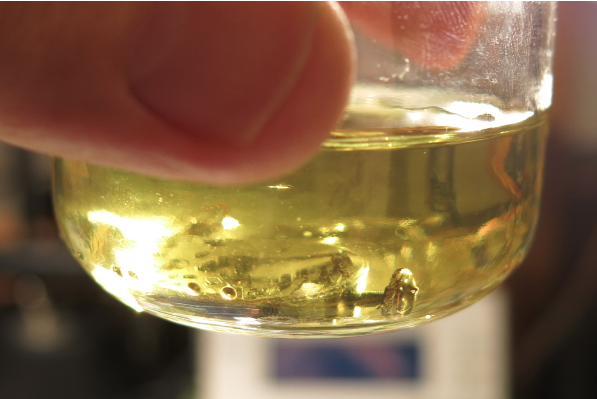 The jar goes into a water bath in an ultrasonic machine and is cleaned for about 7 minutes.  After the cleaning solution, the parts go into two rinse solutions for the same amount of time.  So it takes about 20 minutes to clean a watch thoroughly. 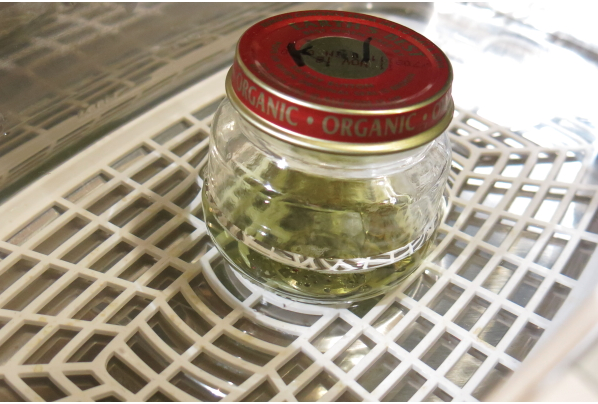 While the parts are being cleaned I will turn my attention to the case.  There are no watchmakers marks in this case - which could easily mean that this watch has never been serviced in the last 50 years!  Note the name "Whitman" is stamped in the case back. 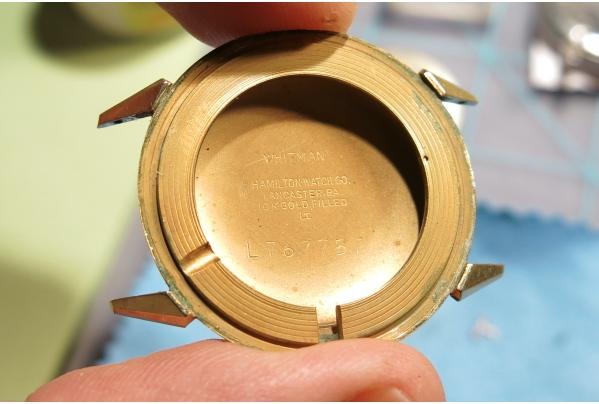 The back of the dial  has no marks on it other than from the riveting process for the gold markers - that's a good sign this dial is original. 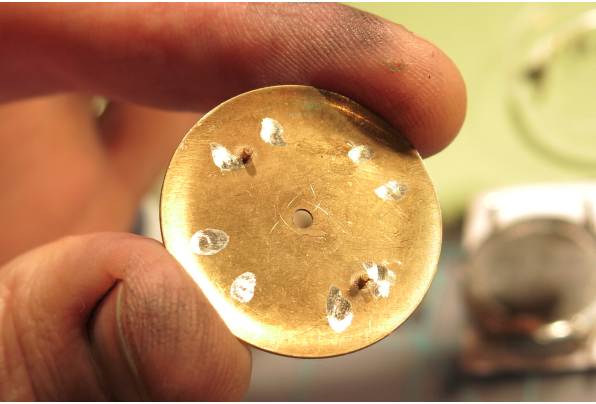 Everything is now cleaned and polished and ready for reassembly. 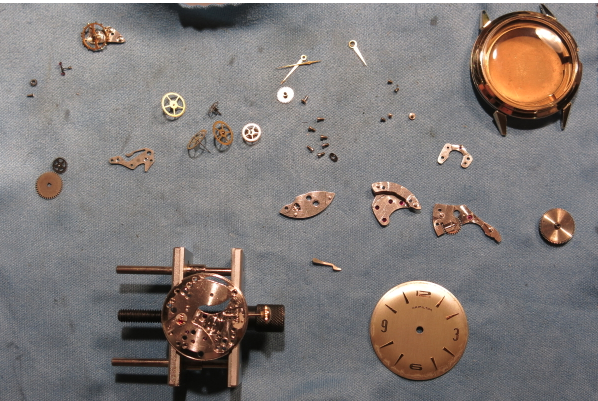 I'll start where I left off with disassembly... first things on are the minute wheel and the set wheel.  The set bridge is on the right (out of focus) and goes on next. 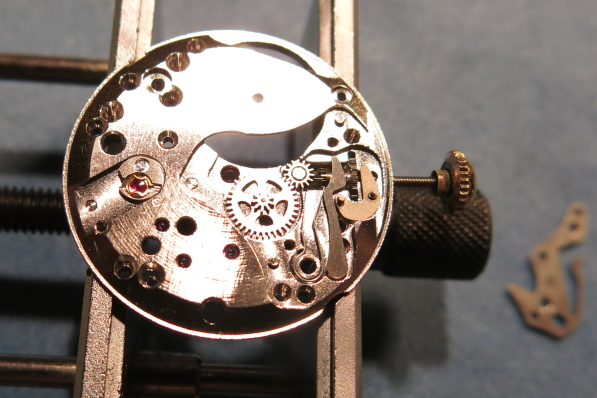 Then the pallet fork goes into place and it's bridge is reinstalled. 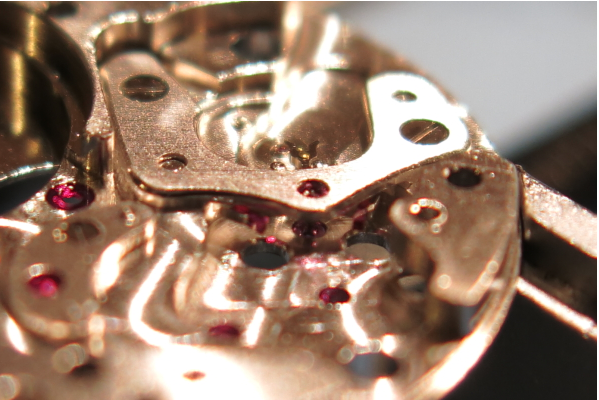 Now the center wheel and mainspring barrel can go back in.  I also relubed the mainspring (but didn't take a picture of it). 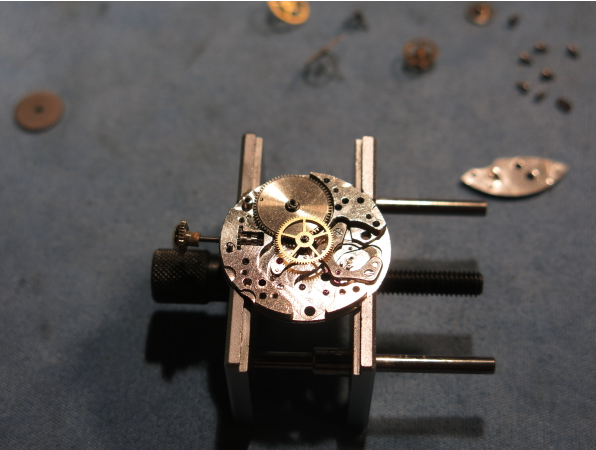 The mainspring barrel bridge goes back on.  Three screws hold it in place. 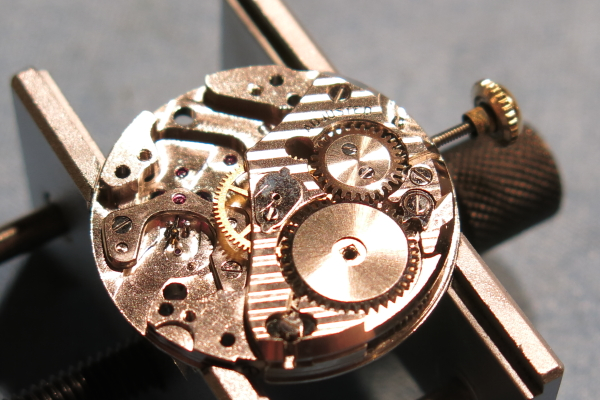 All four of the remaining wheels go back into their respective position.  The need to go in the right order and precedence. 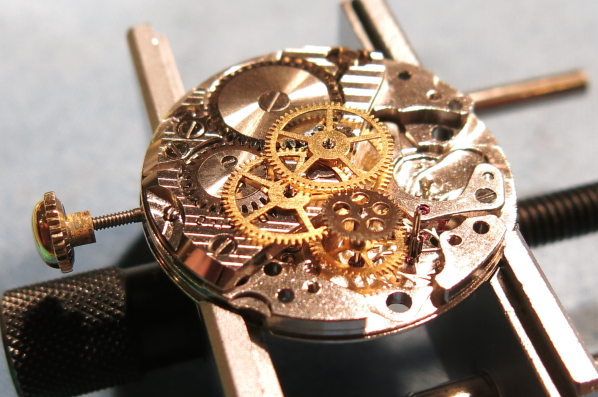 The train bridge goes on next and you have to finesse each wheel into place.  This can take a while - especially if you're not experienced with it.

When I first started working on movements I HATED this movement.  It would take me at least 30 minutes to get it back together, including requiring beads of sweat on my forehead and most of the language I learned in the Navy.  That assumed I got it back together at all.  More than once I broke pivots off the escape wheel or third wheel.

I'm much better at it now. 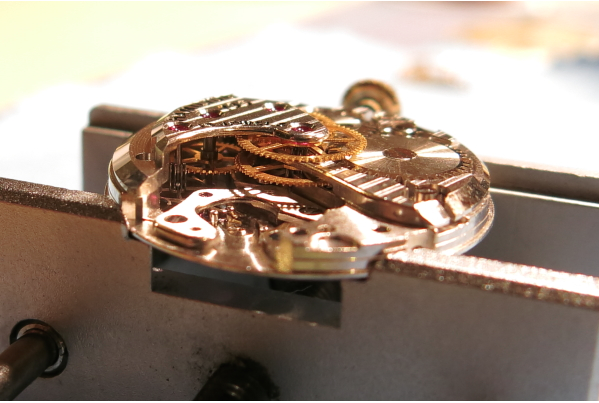 The balance goes back on and with tension reapplied to the mainspring the watch goes onto the timer.  With a little tweaking it's running 7 seconds fast per day with lots of amplitude... not too shabby. 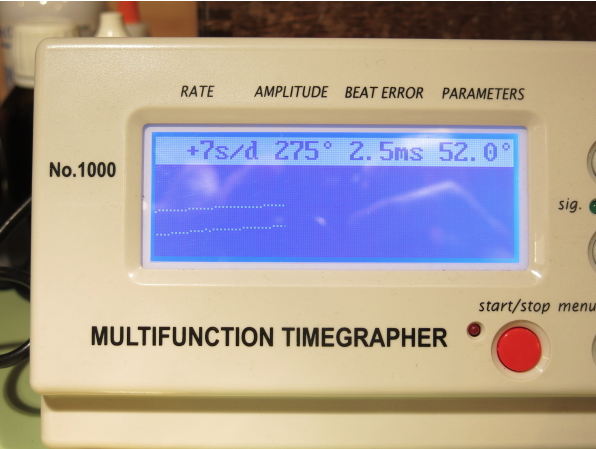 The dial and hands go back on and it all goes back into the case.

And here it is all polished up and ready for wrist time.  It's a nice looking watch, I think. 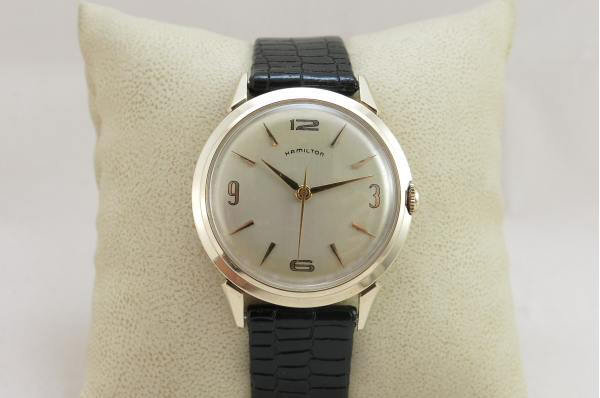