You may have picked up the impression that Hamilton typically named it's watch models after peoples' names... mens or ladies, depending upon the intended gender of the model.  Up until the introduction of automatics, that was largely the case - including dress pocket watches - they all got a man's name, with a few exceptions of course.

By the mid 1950's there were a number of repeat uses of the same name and although there are plenty of common names that were not used (like Daniel, for one) Hamilton introduced some names there were real head-scratchers.  A good example is the 1953 Sedgman.  It was produced in 1953 and 1955 but appears to not have been made in 1954... go figure?

I wondered where Hamilton got the name Sedgman from and a little sleuthing revealed that there was very popular tennis player in the 1950's by the name of Frank Sedgman.  In the five-years between 1948 and 1952 Sedgman won 22 Grand Slam titles in singles, doubles, and mixed doubles - not bad for an Australian (ha ha - sorry Roger!).  I'd be willing to wager that was the rationale for the name but that's purely a guess on my part.

Anyway - it's interesting that it was made in two out of three years.  There are a couple of other models that did that - but not too many.

In 1953 it came with a choice of two dials... an all numeral dial or a two-tone white / butler finished silver dial with solid 18K gold roman numerals and markers. 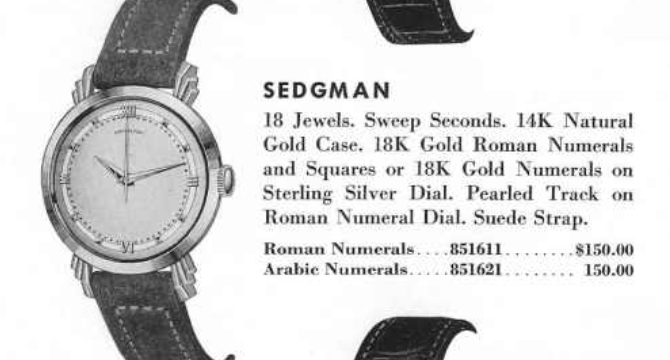 The Sedgman was also featured in the Christmas catalog from the same year.

Then in 1955, both dial options were presented.  The all-numeral dial looks a lot like the all-numeral dial used in the Rodney.  In fact, the shape of the lugs is the main way to tell a Sedgman from a Rodney - that, and the fact that the Sedgman comes in a solid 14K yellow gold case. 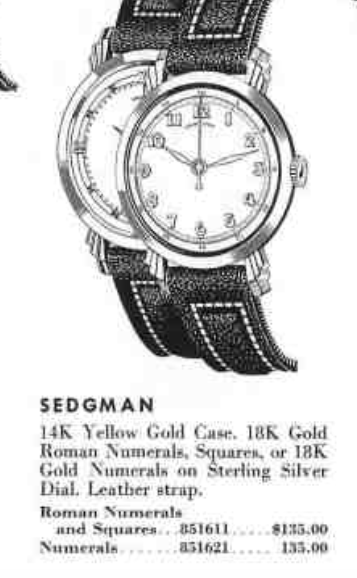 The Sedgman is a good example of the evolution of Hamilton watches to a larger size than the prior decade.  There are a number of watches from 1953 that a significantly larger than watches produced previously.

I recently picked up a Sedgman project watch and it arrived in better shape than I expected.  The crystal was due for replacement and the only other distraction was a very worn crown.  Otherwise it looked very promising. 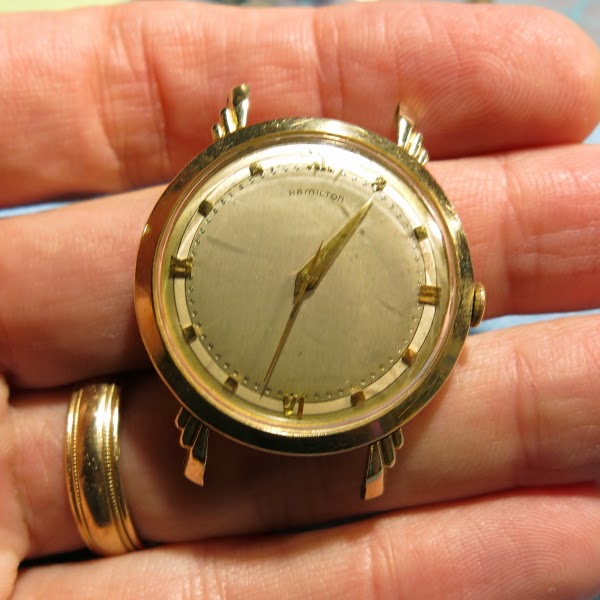 The case back is unengraved and not overly worn. 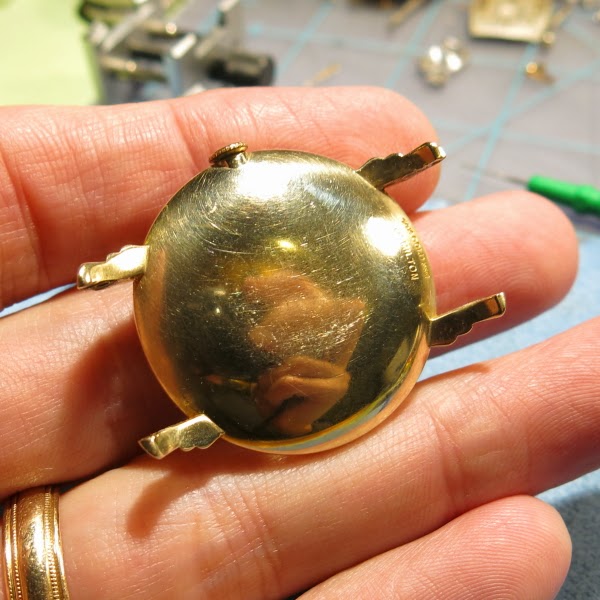 Without the bezel and crystal in place, you can see the dial is in good shape.  There are a lot of details on this dial with the markers, two-tone finish and pearled track.  It could be refinished but it would be tricky to get all the details correct. 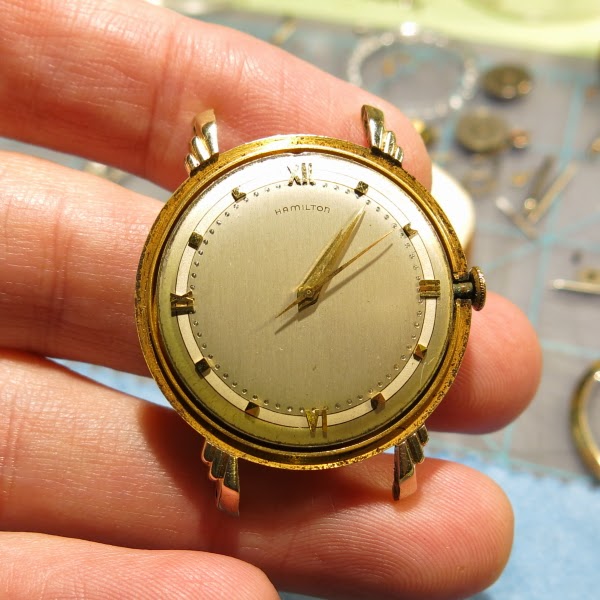 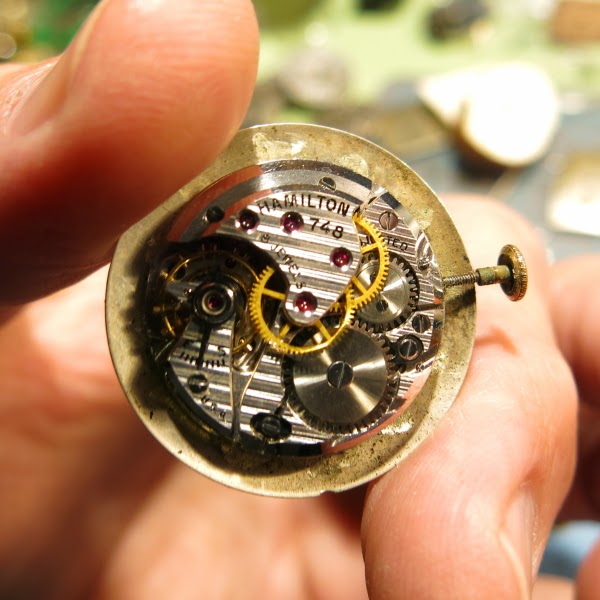 The stamp inside the case back makes identifying this model very easy.  This view looks a lot like a Rodney as well. 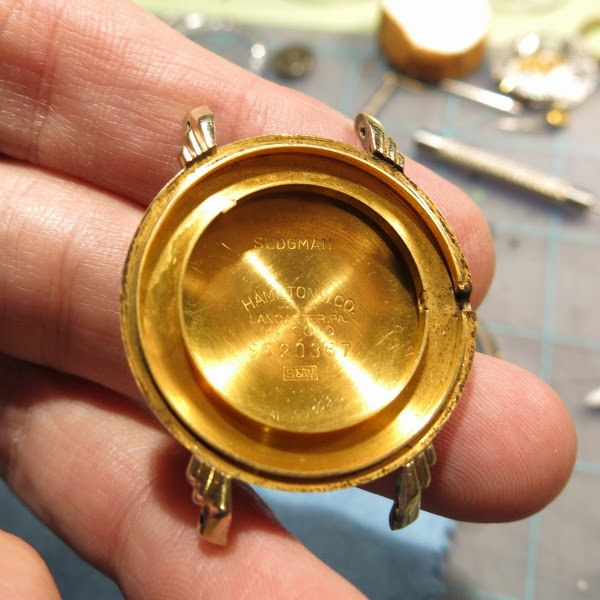 Everything is thoroughly cleaned and ready to be put back together. 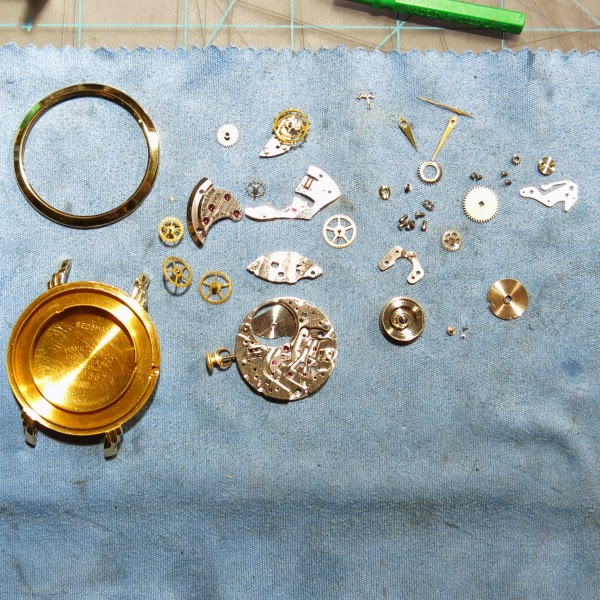 The running movement goes onto the timer to see how it's performing.  The gold layer on the crown came off in the ultrasonic, leaving a ring on the stem.  It's not unusual to lose the gold from a crown once the knurling is worn down.  I was going to change out the crown anyway. 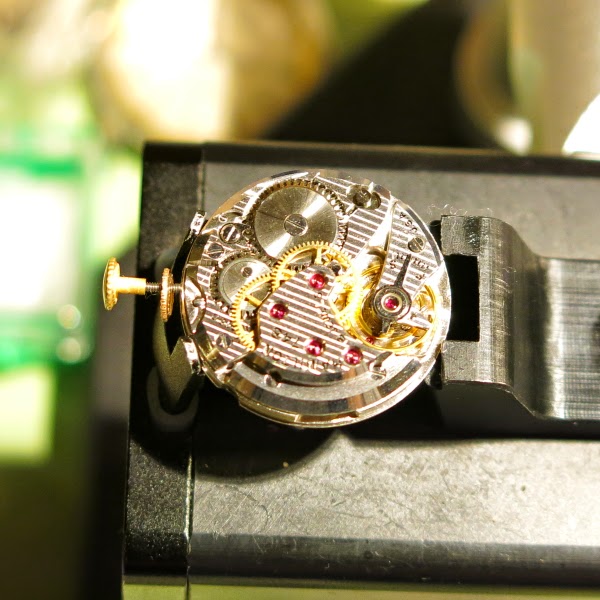 It started out running a little fast, as you can see by the upward slope of the two lines on the left side of the screen below.  You can see the slope of the two lines approach horizontal as I tweaked the regulator slightly to lengthen the hairspring and slow the watch down.  I tend to leave watches running a little fast initially as they tend to slow once everything settles down. 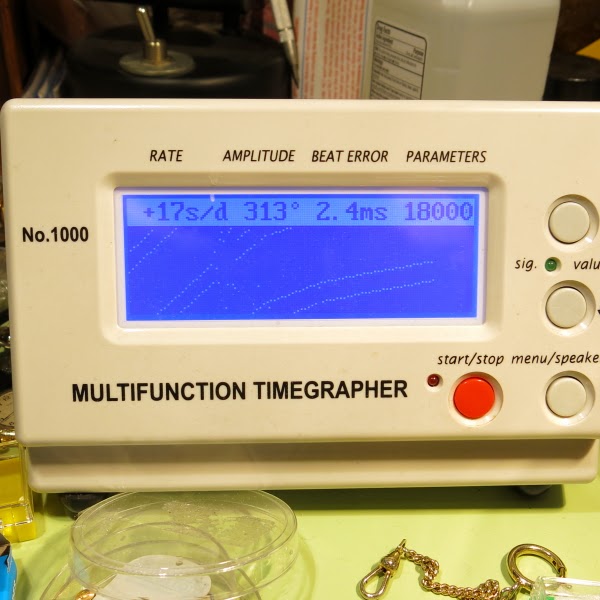 The best way to remove or install a crown is by gripping the stem with a pin vice.  It's best to grip the stem by the round hub so you don't accidentally break it by turning the crown too hard.  The crown just screws on and off but the trick is to get the stem the right length so the crown is in the correct position when then movement is reinstalled. 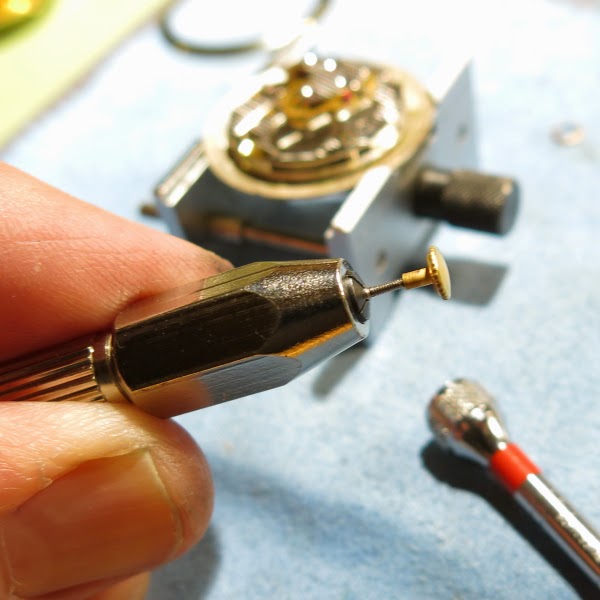 With a new crystal, new crown and a fresh genuine lizard strap, this Sedgman is looking as great as it runs.  Other than a single tiny age spot just above the VI marker, the dial is in excellent shape.  This watch is a great addition to my very small collection of solid gold models. 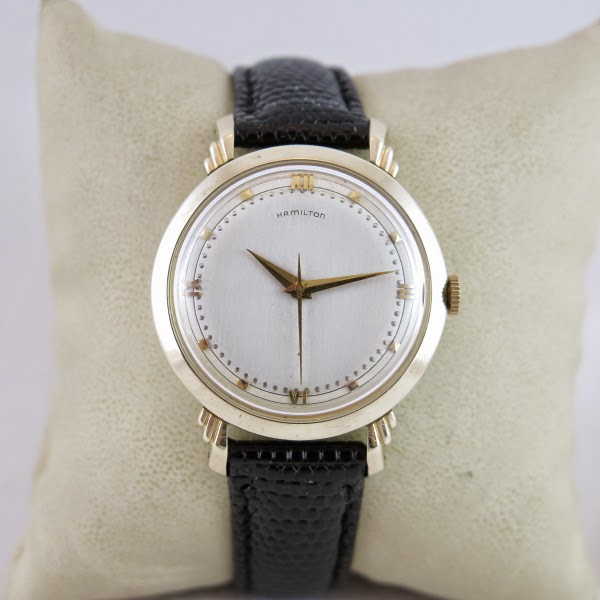