When Hamilton first started to produce wrist watches the first models were ladies watches.  They date back to the early 1900's.  Wrist watches were considered feminine.  However, I guess after a few million men slogged it out in the trenches of WWI it became clear that real men could wear wrist watches too.

In the 1920's, ladies and men's models shared the same movements.  Only the case styles differentiated the intended gender.

By the 1930's, new, smaller movements were introduced for the ladies watches and they started to become a little more elegant with intricate engraving, detailed dials and various hand styles.

The 989 is unique in that it's also the only ladies movement (other than the early years) that was also used in a men's model.  The 1936 Norfolk used the 989 and for a long time it was the only men's model to not have a second hand. 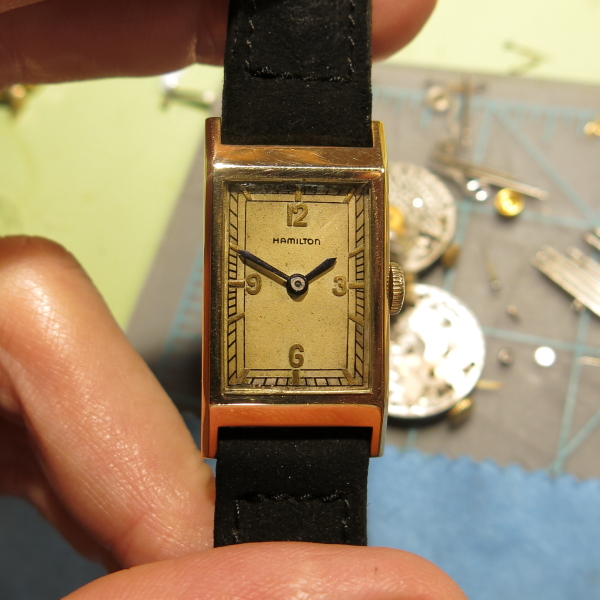 Technically the Norfolk would use a 989E with the Elinvar hairspring but you might also find them with a 989, depending on when the watch was assembled.

Although the 989 is the largest of the oblong ladies grades, it's by no means an easy movement to work on.  It has a tightly packed gear train with long arbors that are tricky to get into position and the balance is precariously unprotected at the end of the movement - so it's very easy to break the balance staff if you mishandle it.

That said, I sometimes find a working 989 watch too hard to resist... especially if it's in a nice looking case.

I picked up such a watch quite a while ago.  I was unable to clearly identify it because the bezel is engraved. 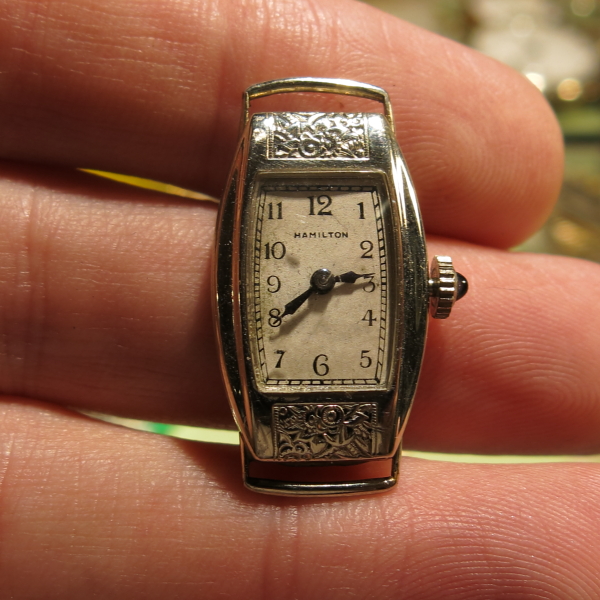 Around the same time I purchased mine, I saw another one for sale... this one came in it's original box with matching papers.  The only difference is it was yellow instead of white. 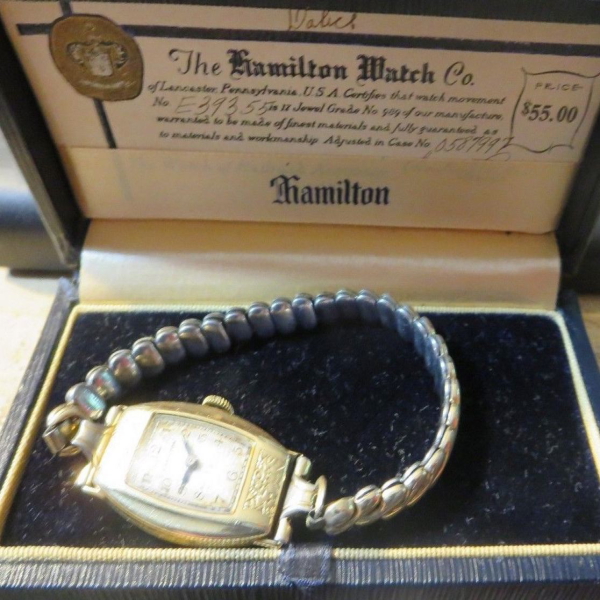 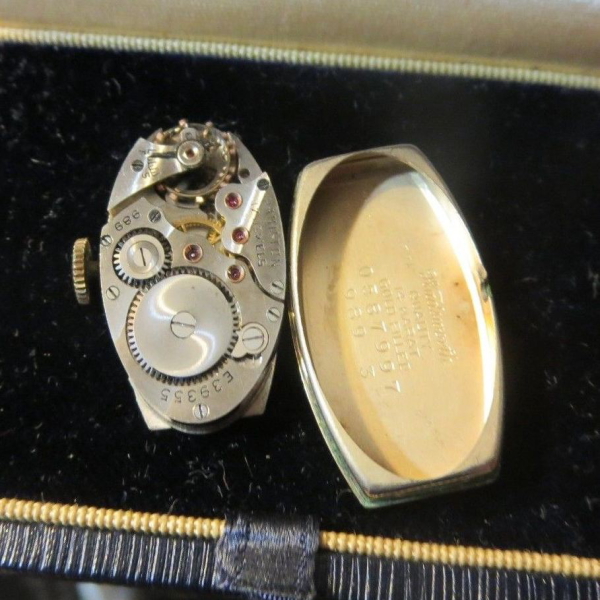 Anyway, armed with confirmation that my project watch was a legitimate model and not a donor-movement for a future Norfolk, I set about trying to identify it.  Identifying models is usually accomplished by noting the case shape, the crystal shape, the case material, and the type of movement inside.

The best I can tell, my project watch is an engraved Edgewood from 1932.  Although the catalog shows a different bezel pattern, the shape, the crystal shape, case material and movement all match.  There are no other models from this period with the same details. 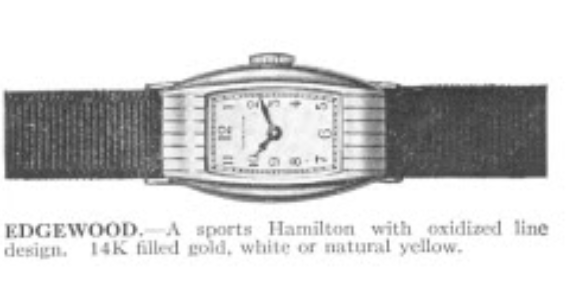 The Edgewood only shows up in the 1932 catalog so it's possible other variations were available.  That's really not unusual and there are plenty of models that were never cataloged.

Anyway, the Edgewood comes in a two-piece case and the back snaps into the front.  My project watch has a "stone crown" which is a crown with a gemstone in the center. 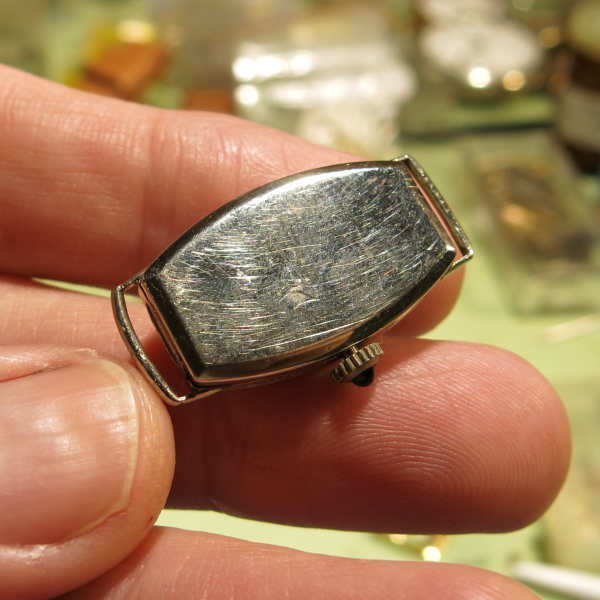 Although the 989 has a two-wheel train bridge, you need to put all the wheels in at the same time as the bridge covers all four wheel.  Note ho the balance wheel is so close to my finger.  One small move and the balance staff will go "POP" and that's the end of that. 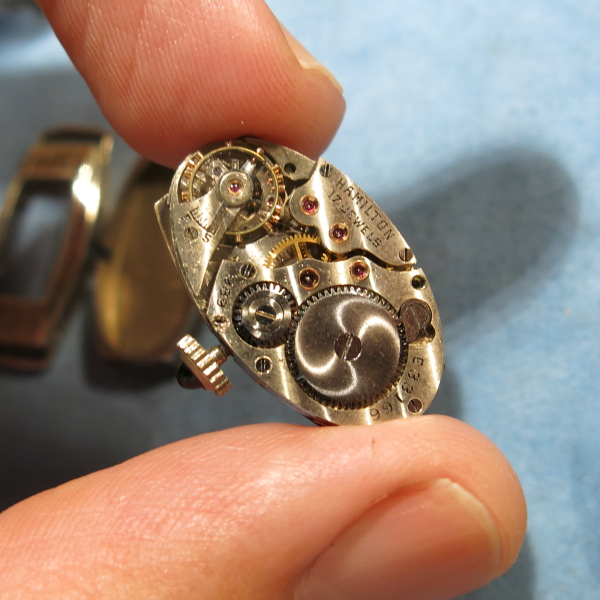 Here's another shot of the balance wheel and it's precarious exposure.  It's fine when it's in the case but outside the case you need to be very careful.  At this point I have removed the hands and now I need to unscrew the dial foot screw on the side of the main plate.  Then I can remove the dial. 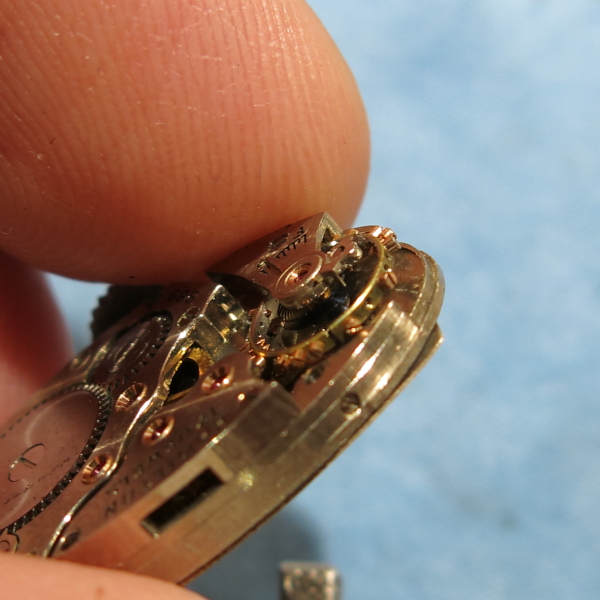 With the dial out of the way you can see the keyless works and the hour wheel, minute wheel and setting lever spring.  All that comes off next. 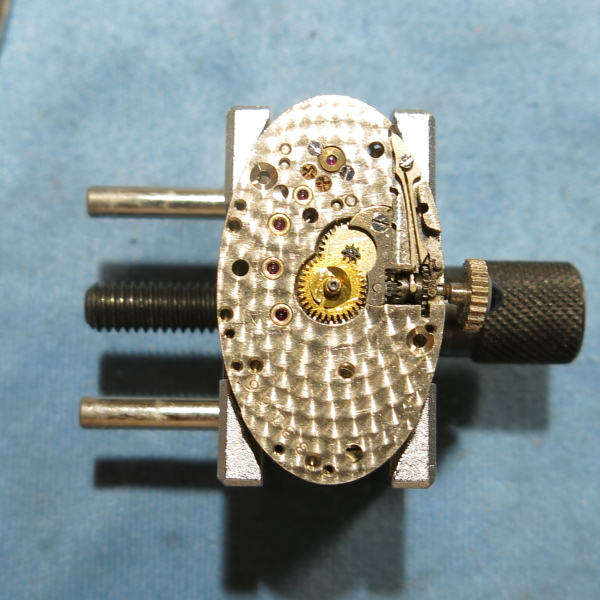 With the movement flipped over and the mainspring tension released, I can start to disassemble the back. 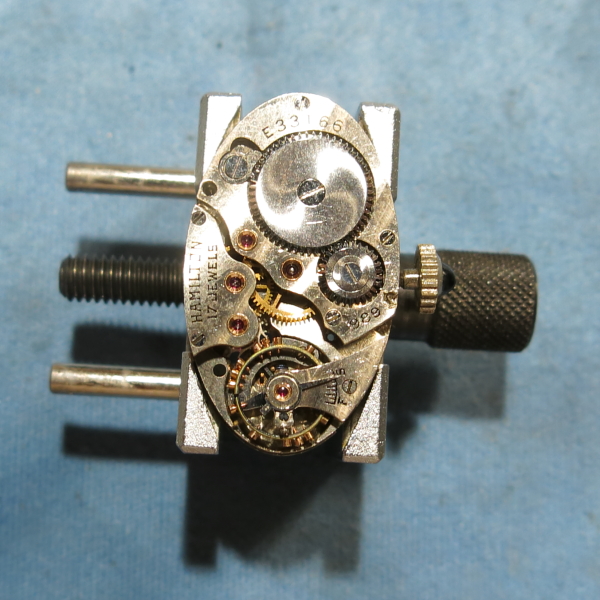 Normally I work my way from the mainspring to the balance when I take things off.  But with this movement I like to take the balance off first - just so it's safely out of the way.  Then I'll take the winding wheel and ratchet wheel off. 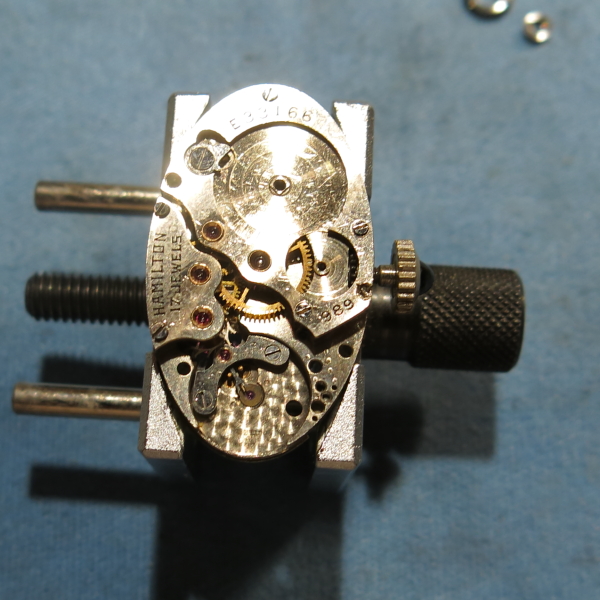 There are six bridge screws to remove in order to get the bridges off and expose the wheels below.  You can see how they all nest together in a tight space.  The wheels come off and then I'll remove the pallet fork at the bottom of the photo. 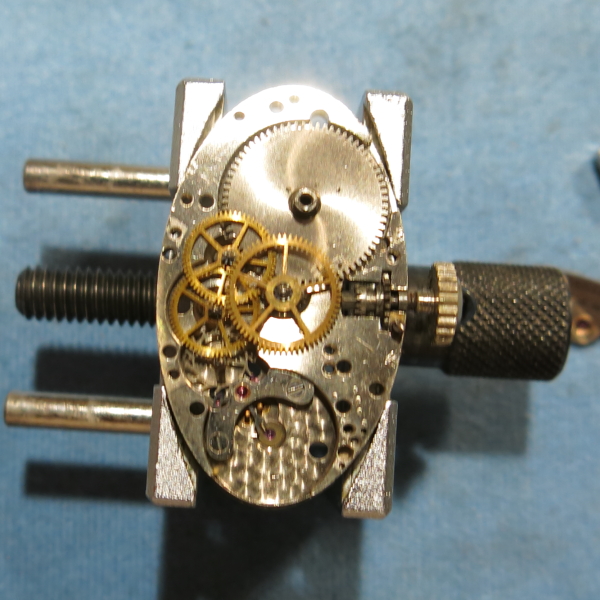 Everything is cleaned and dried.  Time for reassembly with fresh oil. 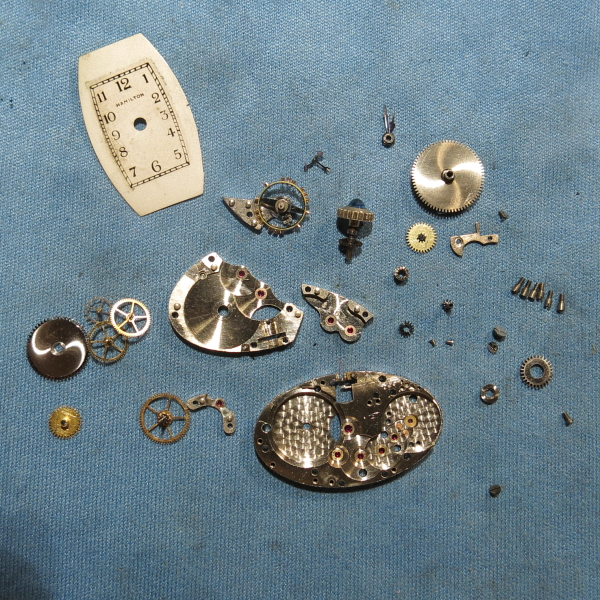 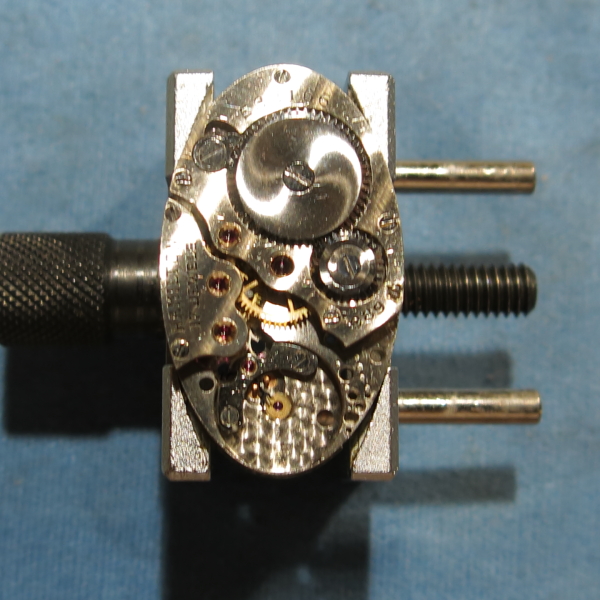 All the setting parts go in where my screwdriver is pointing.  I also had to replace the set lever screw on this movement because the screw head was broken and there was no notch for the screwdriver to turn it.

One interesting bit of trivia with 989's is the early grades don't have a tip on the stem.  The are only supported in the middle by the set lever.  Later 989's have a stem with a tip that is supported by the main plate. 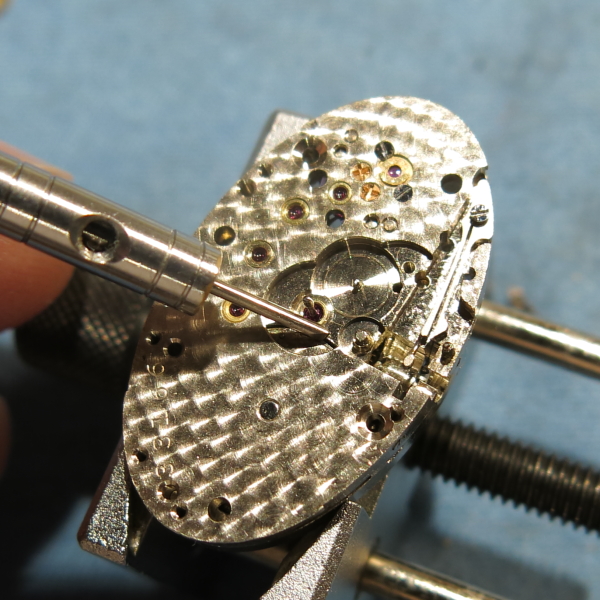 Now that the front and back is reassembled, I can put the balance back on.  I hate this part... it's nerve wracking to get it in just the right position and then seat the balance cock.  It's very easy to drop the balance cock off the movement and stretch the hairspring like a tiny slinky.  That's usually a great way to goof up the hairspring and it's just as bad as breaking the balance staff. (been there, done that) 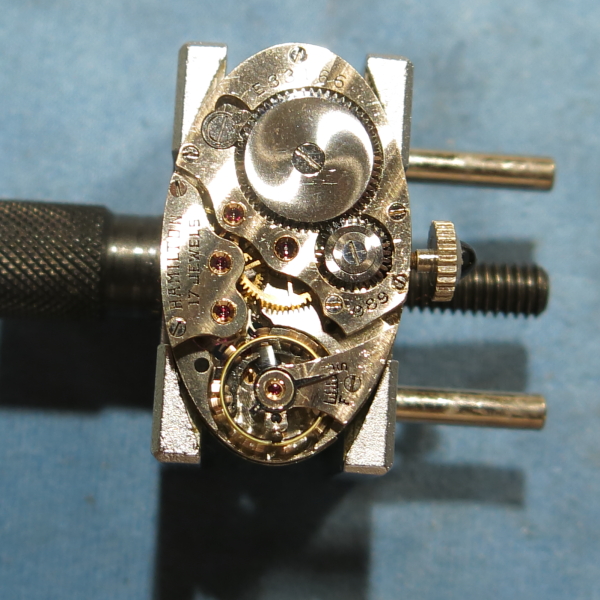 The watch is now running so it's off to the timer.  The watch looks to be running fairly well.  The amplitude is lower than 200.  That's due to the old mainspring I left in the watch.  It just doesn't have the "get up and go" that it used to have so this watch will not run as long as it would if it had a fresh mainspring. 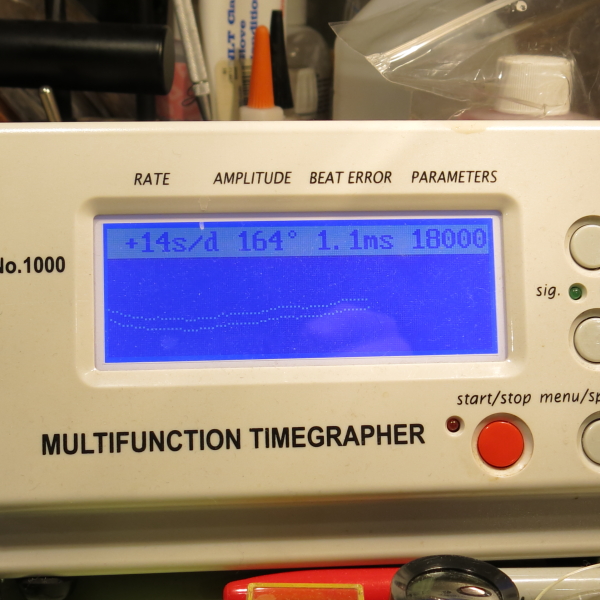 The movement goes back into the case and I can sigh relief that the balance is now protected again.  I re-enameled the engraving on the case.  There's engraving on sides too - this is a very pretty watch.  I happened to have a stainless steel bracelet to put on it while I look for a nice ribbon strap. 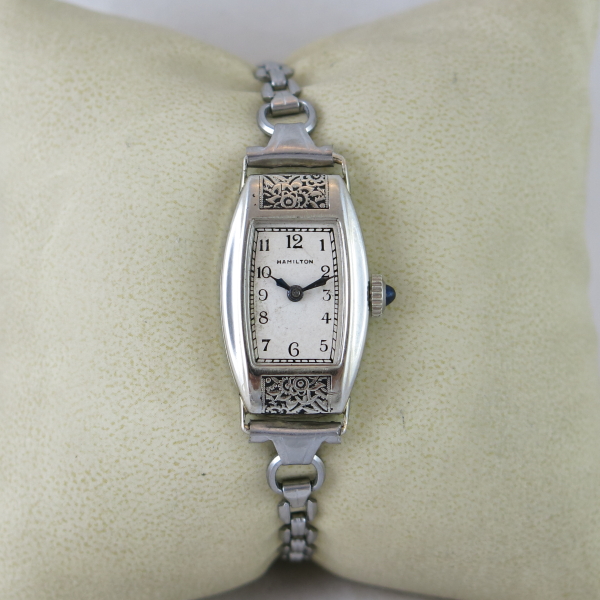 Unfortunately ladies watches aren't as collectible as men's models.  I think that's due in general to the smaller size of ladies watches and the decades worth of very similar cocktail watches out there.  The supply is high and the demand is low.  However, I think these 1930's watches are beautiful and I like restoring them, even if they may not command a premium once restored.  They still make nice gifts to people who appreciate "sparkly things".  This Edgewood turned out very nice... don't you think?
Posted by HandyDan at 1:34 PM