Things got a little wonky with Hamilton in the 1970's.  The company was caught up in several changes in ownership and the watch industry in general was in turmoil as mechanical movements gave way to electronic movements and eventually to quartz movements after that.

There were about 1/3rd as many watches offered in the 1970's catalog as there was in the 1969 offering.  Hamilton moved it's manufacturing center to Buren's facility in Switzerland.  Hamilton had acquired in Buren in the 1960's and the master eventually became the servant.

Buren's forte was super-thin movements and their micro-rotor designs were the power plant for many of the Thin-o-matic models.  Their manual winding grades were used in the Thinline models.

I recently picked up a mystery model and based on the eBay auction photos I wasn't completely sure it wasn't a "franken" or a recessed Hamilton movement in a generic case.

As received, it was quite dirty and the crystal was a bit beat up.  The Speidel expansion bracelet isn't likely to be original but it goes well with the watch. 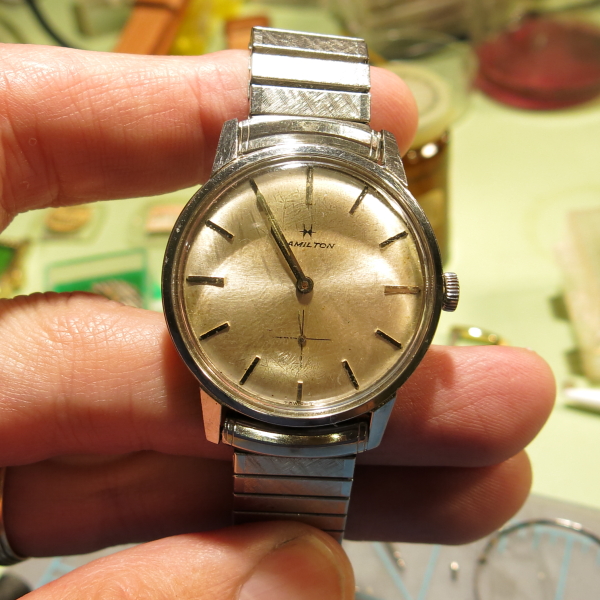 The back of the watch unscrews.  It's got some generic printing but none of it says "Hamilton".   However, the model number of 19001-3 fits the pattern that Hamilton would use and the -3 represents stainless steel, which this case is made of.  So that was a good sign that it's legitimate.   The auction didn't have a movement photo or a shot of the inside case back so I took a leap of faith in purchasing. 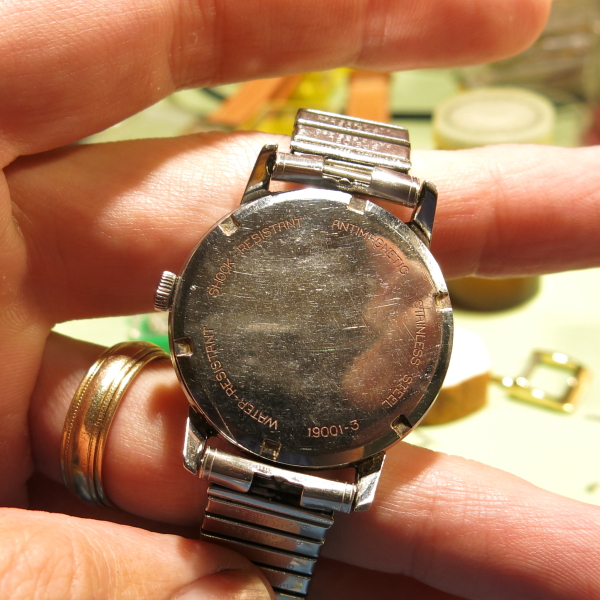 Once I opened the watch the inside of the case back is stamped Hamilton Watch Co Swiss - so this is clearly a 1970s model.  It doesn't show up in any of the catalogs I've seen but that's not unusual.  Based on the gunk around the perimeter and the lack of any watchmaker marks inside, I suspect I'm the first person to see the inside of this watch in 40+ years. 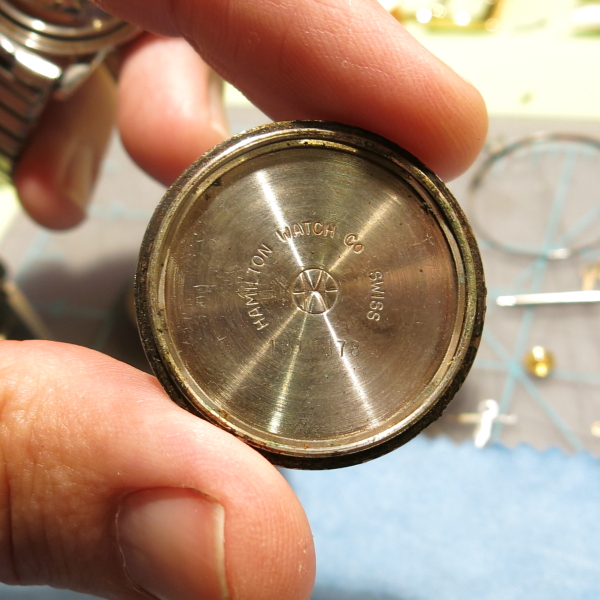 The 17 jewel 639 movement is a Buren grade so although I don't know the exact model name (it could just be 19001-3) I'm going to assume this is a Thinline model of some sort.  The movement is dirty but looks pretty good, all things considered. 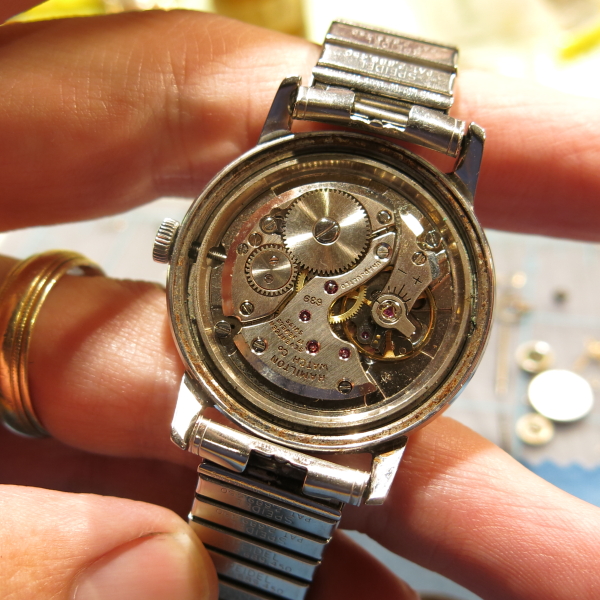 There's a little bit of rust under the winding wheel - that will come off in the ultrasonic.  I'll take the movement completely apart and get everything nice and clean. 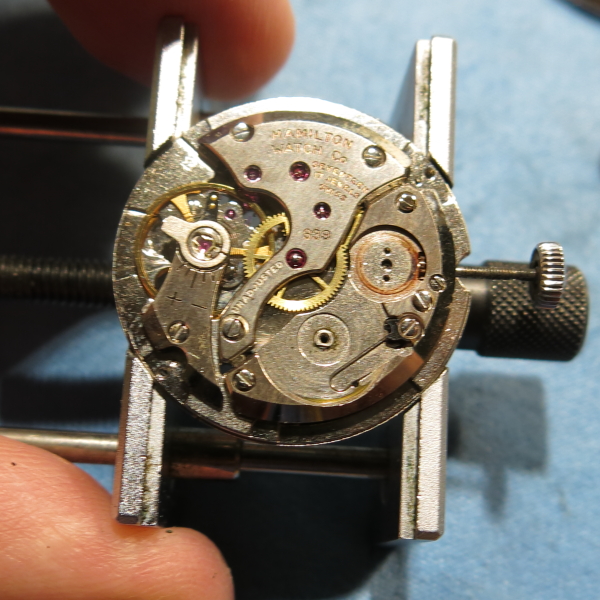 Everything is cleaned and dried.  While the parts are being cleaned in the ultrasonic, I buff the case on the buffer.  Then I use the dirty cleaning solution to clean the case once the parts are in the rinse cycle.  Everything comes out nice and sparkly. 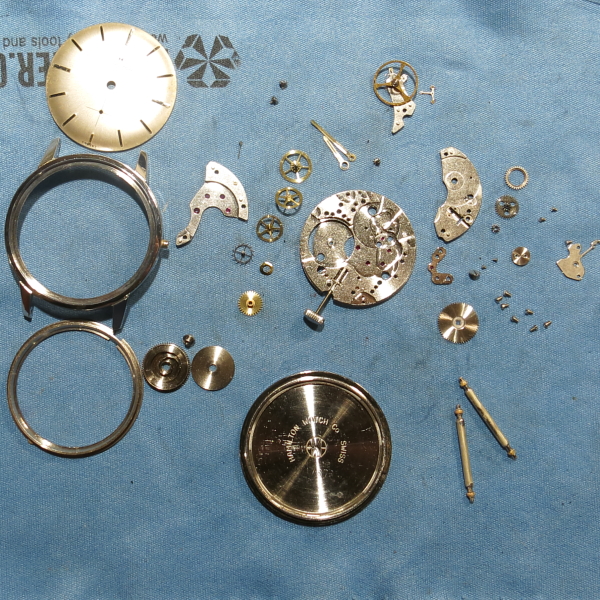 The movement is now reassembled and running.  It looks pretty good to my eye but only the timer will tell me for sure. 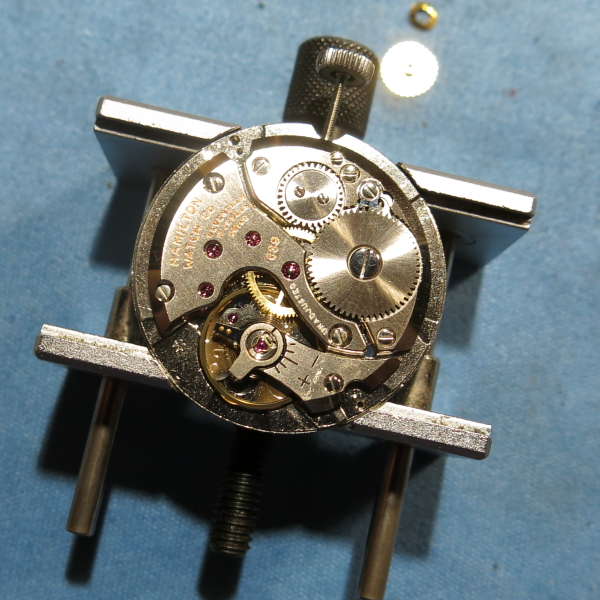 Hmm... running fast, low amplitude and a high beat error.  Although watches from the 1950's and 60's tend to be robust to magnetism, I think I run the movement through my demagnetizer and see what happens.  Older movements from the 1940's and earlier are much more prone to getting accidentally magnetized and that will screw up the timing for sure. 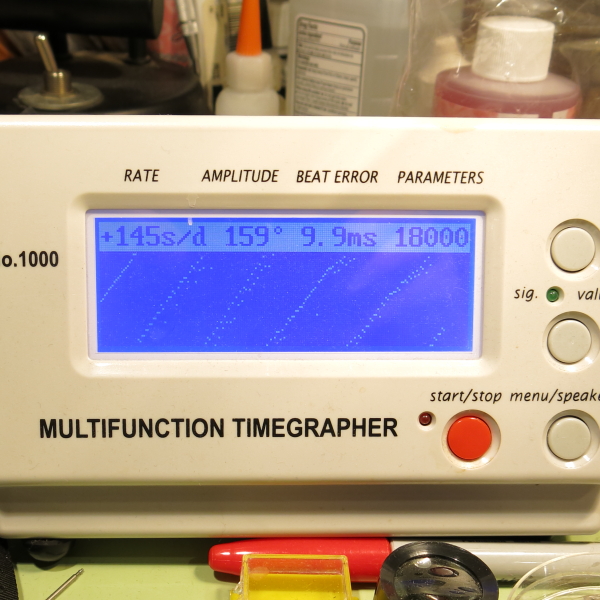 Well... that's a little better but it's not good enough.  I take the balance off and reclean the hairspring, etc. 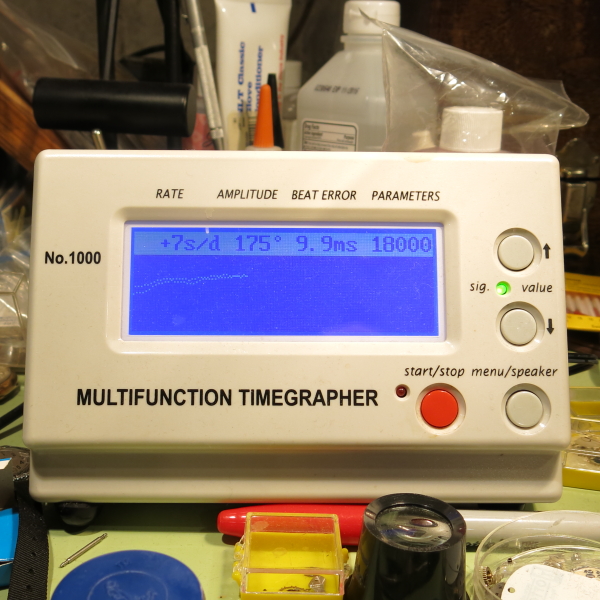 A little tweaking and the movement is running just as it should.  I usually leave watches running a smidge fast as I find they tend to settle down eventually. 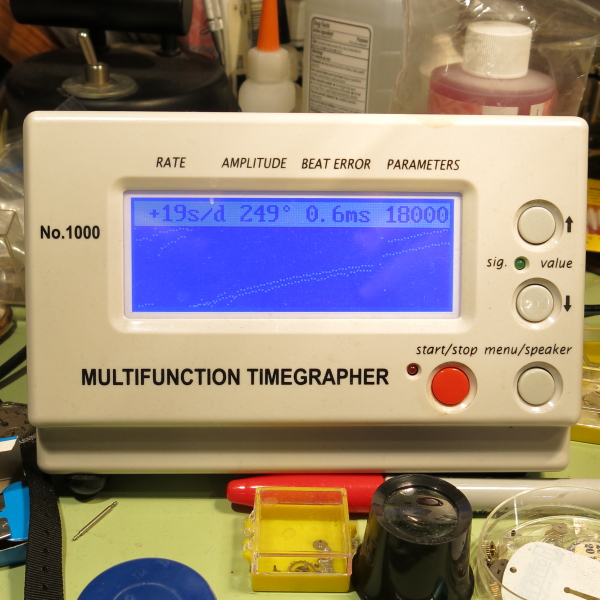 A new crystal makes a nice improvement to the watch. The dial has a little blemish between the 2 and 3 markers thanks to some moisture getting inside.  I bet that was the same moisture that rusted the winding wheel.  It actually doesn't look that bad in person but my camera is merciless when it comes to defects.  In any event, this mystery Thinline turned out pretty well - and it's a good size too - probably close to 35mm wide. 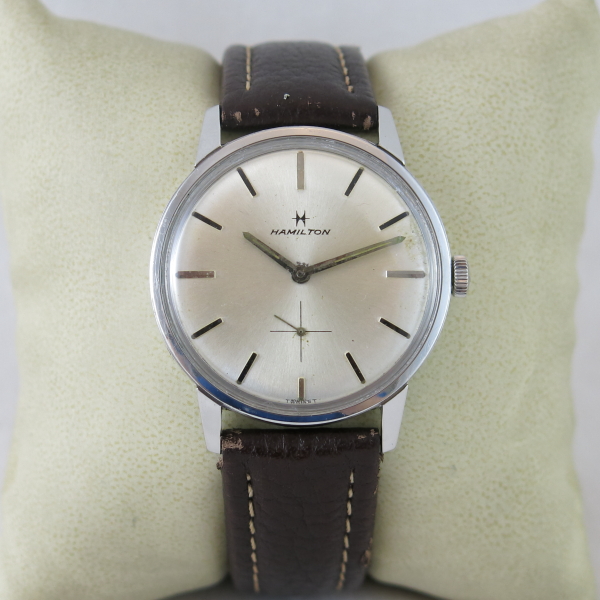