The 987 and 979 had jewel chattons, or settings, that were held in place with tiny screws.  By the end of the 1920's the 987F and 979F were on the scene.  The F was for friction - and the chattons were pressed in place and held by friction.  In 1935 the new 14/0 sized 980 and 982 were introduced and all of the solid gold models received 982's.  The 979F was discontinued and the following year the 987E was introduced in all models with 6/0 movements.  The E was for Elinvar, Hamilton's new hairspring material which allowed improvements to the balance assembly.

That brings us to 1937 and the dawn of a new era in 6/0 models.  The 987A was a dramatic improvement over the 987E.  The first three 987 variants share vitually all of the same parts... and you can swap parts from one grade to the other.  However, the 987A is significantly different.  It shares some of the same parts - mostly the gear train and the balance staff - but that's about it.

One of the new models introduced with the 987A is the Harris.  It was produced for only two years.  It came in a 10K yellow gold filled case with a choice of an applied gold numeral dial or a black enamel numeral dial.

The Harris is on the smaller side even though it has a large 6/0 movement inside.  That's probably because of the flat rectangular shaped bezel opening.  The case is very prone to wear through, especially near the corners of the crystal.  Several years worth of wear against shirt sleeves can take a toll on the case.

As you can see below, the 987A is similar to it's predecessors but it's considerably different.  Initially the 987A's has recesses for case screws so it could be held in place in 3-piece cases, even though there were no three piece cased models at the time.  That implies it was meant to be 100% interchangeable with the other 987 movements.  However, by 1938 the case screw holes were left out of the 987A design, as shown in the 1938 movement below. 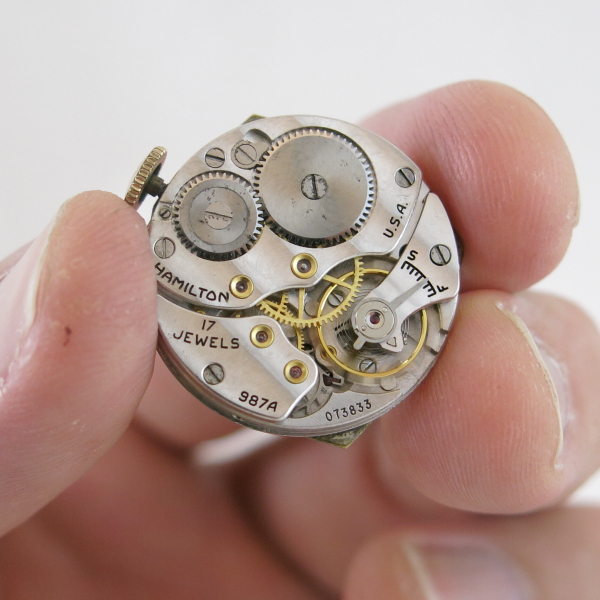 In 1940 Hamilton introduced the 987S - with a central sweep second hand.  It's very similar to a 987A.  WWII saw the introduction of the 18 jewel 2987.  It's almost identical to the 987S other than the 18th jewel to support the special second hand sweep pinion.

So Hamilton got a lot of mileage out of the 987A design.

I recently restored a Harris but I neglected to take photos of the process. I thought I had already posted about the model so I did't bother to document the process.  I wish I had a "before" photo because it was in rough shape after 75 years.

I've restored several Harris's in the past.  However, I had not done a black numeral dialed version.

I thought this one turned out really well. 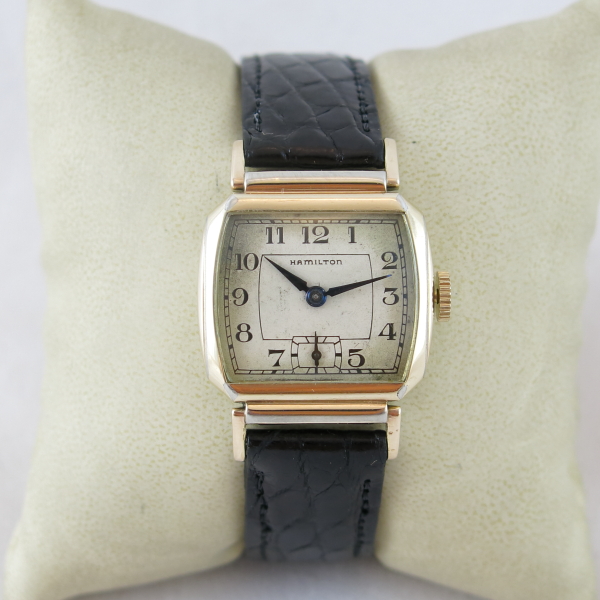 And here's an example of the AGN version from a few years ago.  Although the black enamel dial was less expensive when new, I think they are considerably less common today and much more appealing to collectors.

The Harris is very similar to the 1938 Reagan.  The latter is a little more square than the Harris but they are easy to confuse.  The Reagan came with an AGN or black numeral dial as well.