I know a lot of Hamilton collectors who don't like "round watches".  They think they're a little boring, I suppose.   I don't really understand the bias though - as I think when you look closely at each Hamilton model there is usually something to make it unique.  Although I have to admit that after a while round watches do start to look a bit repetitive.

Of course, there are plenty of non-round watches in Hamilton's line up.  So if you did find yourself in the "hip to be square" demographic, you could assemble an impressive collection without ever landing a round watch.

A non-round watch you'd surely like to acquire is a 1960 Ansley.  It was only produced for two years. 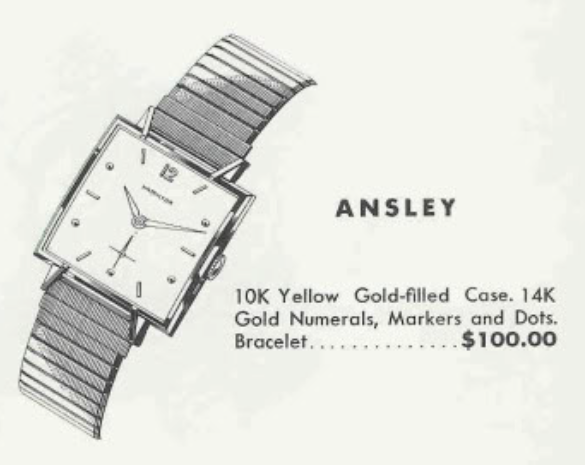 Personally, I think square watches tend to look a bit the same after a while too and some, like the 1958 Drummond, could challenge any round watch to a "most-boring competition" and come out victorious.  However, the Ansley has a lot going for it.  For example, I like the way the way the lugs stick up like cat ears and the hour markers align to them.  It reminds me a little of the 1955 K-454 "Sputnik".

The Ansley came in 10K yellow gold filled case with a sterling silver dial and 14K solid gold numerals and markers.  It was one of the few watches that was offered solely with a bracelet and without a strap option.  I say "few" in that it was less common for watches to be offered solely with bracelets although that did happen often enough in the 1950's and '60's.

Another thing that makes the Ansley a great watch to acquire is it was outfitted with the 22 jewel 770 movement - considered the top of the line when it comes to Hamilton US-made grades.

I recently acquired an Ansley project watch.  It arrived without a bracelet and with a cracked crystal.  The watch would run but the hands did not move.  That can mean a couple of things but often it's just a loose cannon pinion. 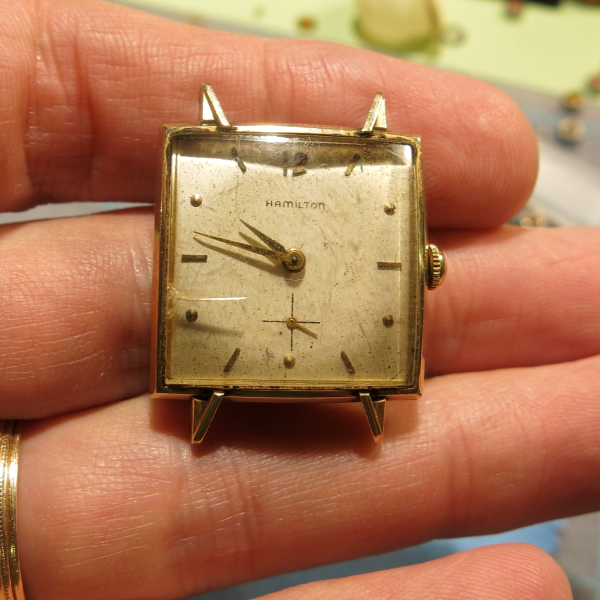 The case back for 770-based models often has a round flat area on the back.  It seems a bit funny to see a round back on a square watch - especially when the movement isn't round either. 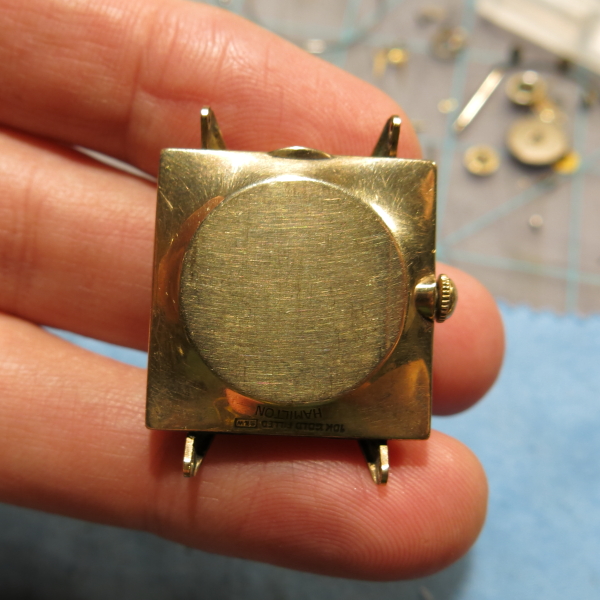 The dial is very dirty and something seems to have bent the 2 in the number 12.  The bottom of the 2 is bent upward but I should be able to straighten it out. 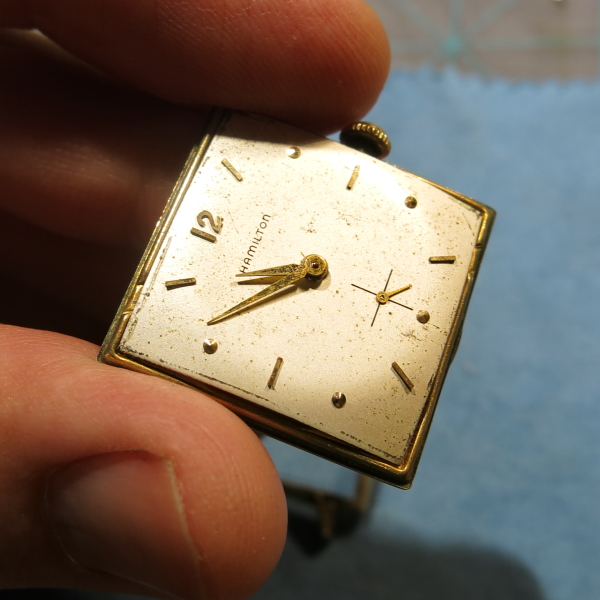 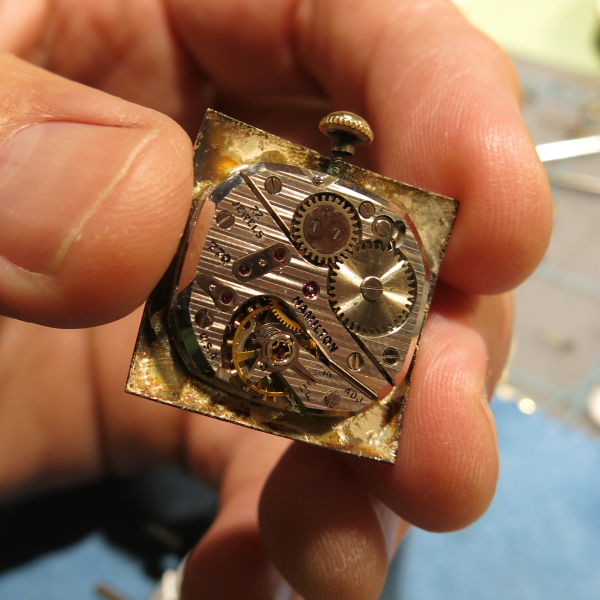 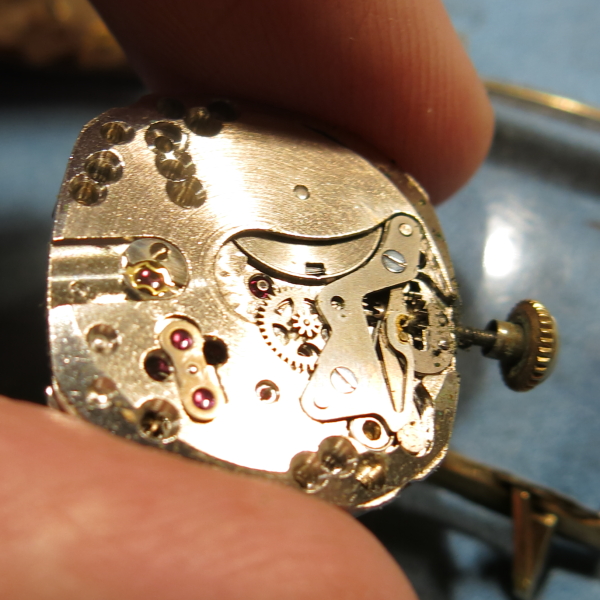 Here's a view you don't usually see, the backside of the hour wheel with the cannon pinion inside.  They come apart easily.  The tricky thing will be to get the broken section of the center wheel out of the cannon pinion so I can reuse the pinion. 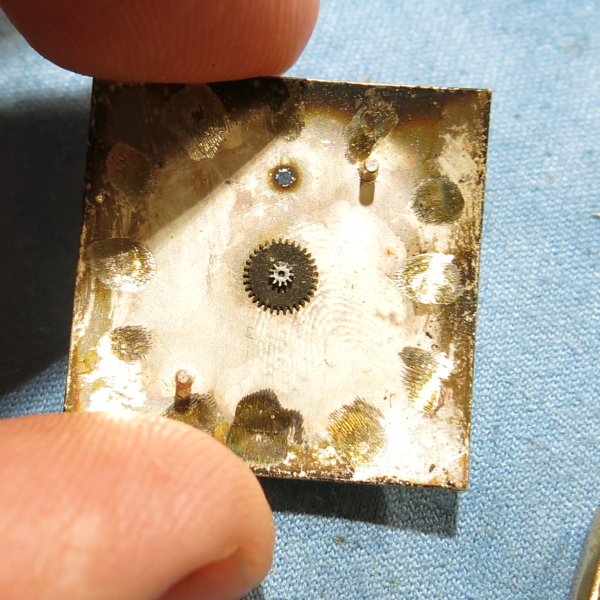 Fortunately it wasn't too hard to push the broken section of center wheel shaft out of the cannon pinion. 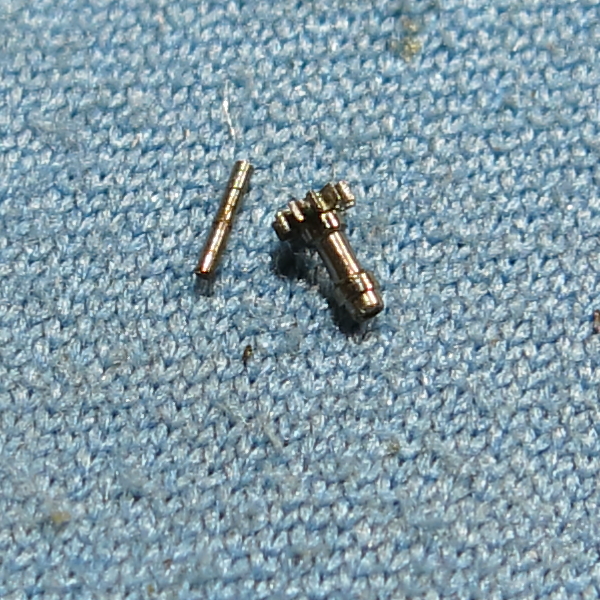 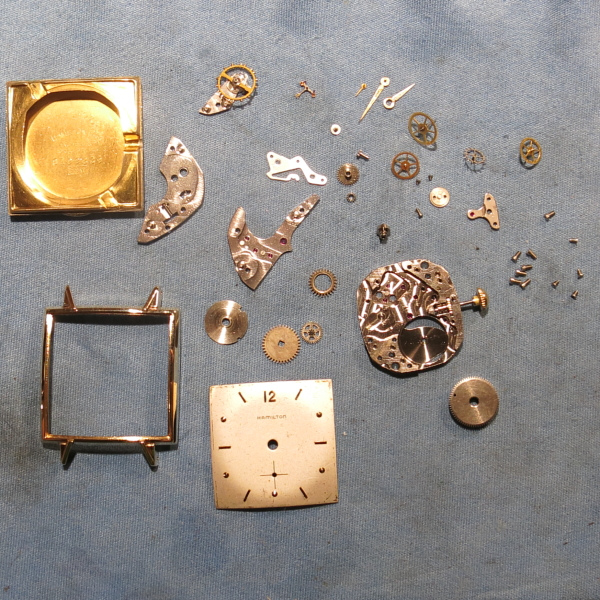 The movement is running and looks good to my eye but the ears of the timer will tell me for sure. 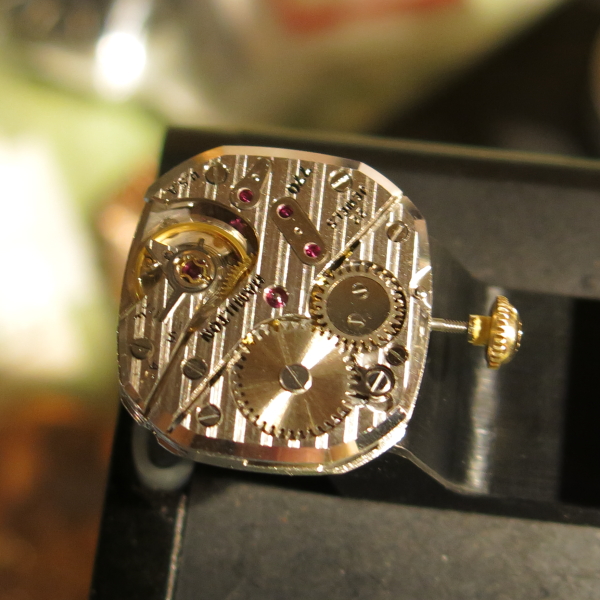 You want to see two fairly close parallel lines on the timer that run close to horizontal.  At first I thought, "not too bad" and then the beat error popped up.  8.7ms is a lot - that means the lines are actually much further apart than they appear.  In essence, the bottom line is on top and the top line is below - that's how far apart they are. 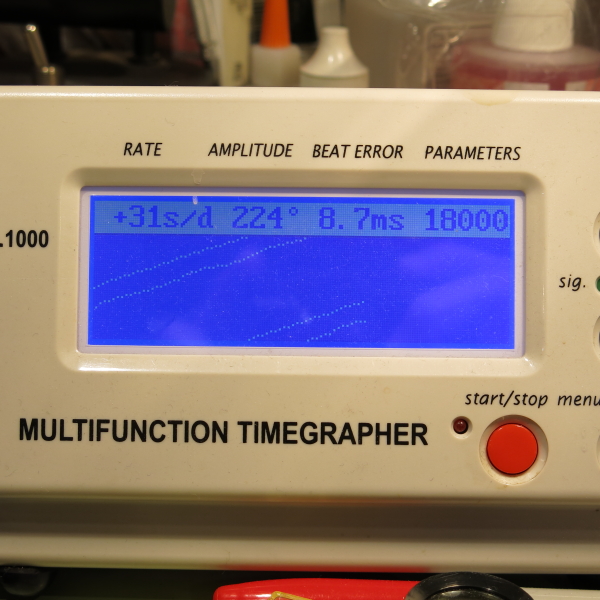 To adjust the beat error I need to remove the balance from the balance cock and then rotate the hairspring collet on the balance staff - in effect moving the position of the balance's impulse pin with respect to the pallet fork.  It's very precise work and you have to move it in the right direction too - which isn't aways obvious.

Well - as you can see below, the beat error is much less.  I like to get as close to zero as I can but I will be delighted with anything under 1 and happy if it's under 3.  Between 3 and 4 I usually ask myself if I feel lucky... if I do, I will try to adjust it.  Over 4 I always give it the college try.  The movement is running a tad fast though so I'll tweak the regulator to slow it down. 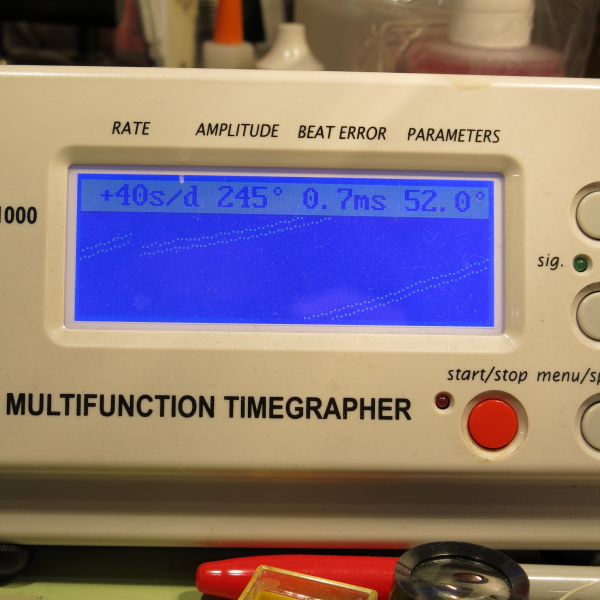 Alrighty then... as you can see the two parallel lines are running horizontal now and they are close together.  The amplitude of 230 degrees is fine... anything over 200 is okay.  I like to see mid 200's but it really depends on the mainspring that's installed (among other things).  You don't want to go too far above 300 or you'll risk banging the impulse jewel into the wrong side of the pallet fork. 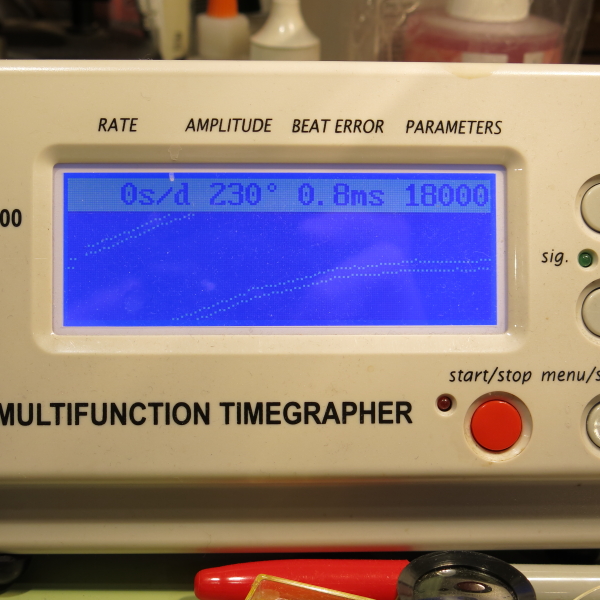 I don't have an original bracelet for the Ansley so I'll install a nice croc strap instead.  I also don't have a replacement crystal for it either.  I straightened the 2 fairly well and once a new crystal is in place this Ansley will be ready for some well-deserved wrist time. 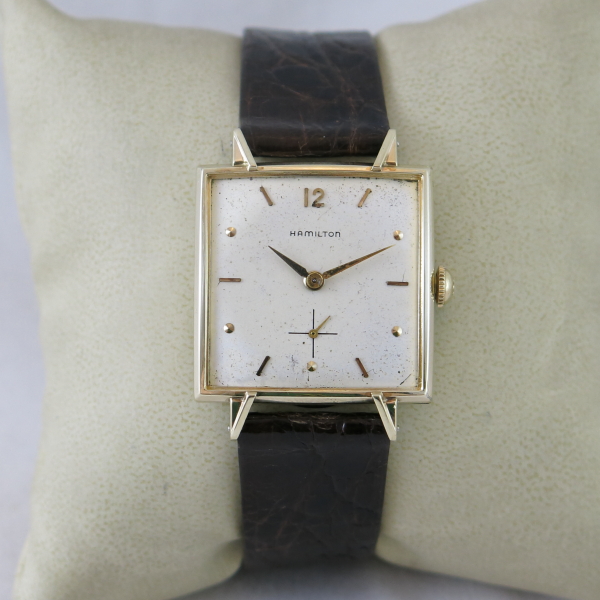