An interesting bit of Hamilton trivia is the CLD-line (or "sealed" line) of models all ended with -don. Croydon, Langdon, Reardon, etc, all except two of the first models... the Lange and the Norde.  Those two models didn't end in -don because they were solid gold versions of gold filled models named Langdon and Nordon. 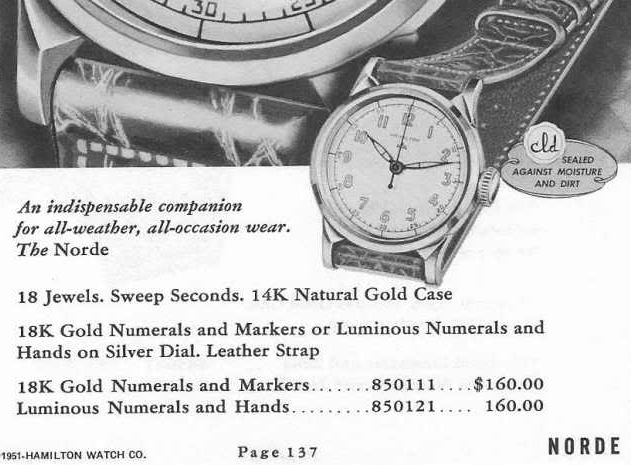 The Norde came in a solid 14K yellow gold case with your choice of two different butler finished sterling silver dials... one with solid 18K gold numerals and markers and the other with luminous numerals and matching hands.

The case featured gaskets around the glass crystal, the bezel and the crown so that it was effectively "sealed" from the environment.  It wasn't marketed as "waterproof" but it was one of the earliest models in Hamilton's lineup to feature gaskets.

You very rarely see Nordes in the wild.  I think I've seen two or three - tops.  So when I saw a beat up Norde on eBay I decided to through caution to the wind and pursue it.  Fortunately no one tried to out-snipe me and cause me to pay dearly for it but it didn't come cheap.

It arrived with several easy to identify but fixable issues.  First, the crown is an obvious and incorrect replacement. 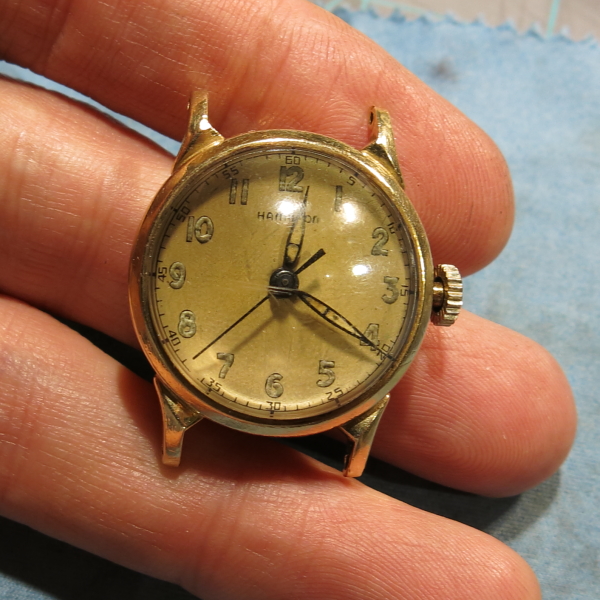 The second issue is the crystal is highly domed and looks pretty goofy, in my opinion.  That will definitely have to go. 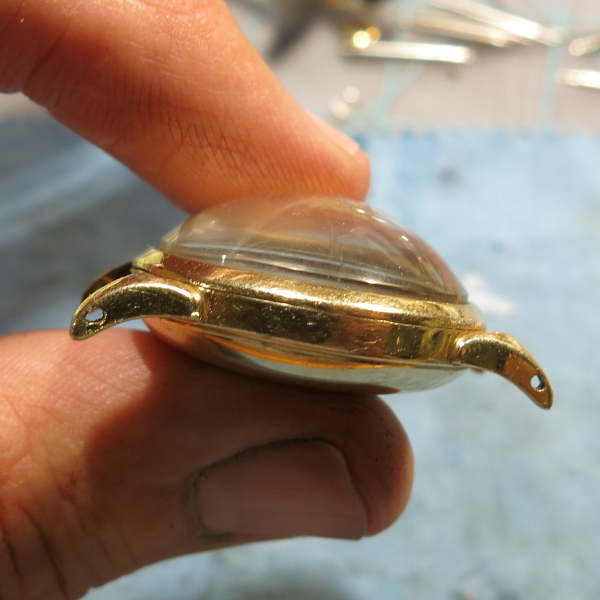 The case back is engraved with a presentation from Carlisle Tires - that company is still around today.  You can see in this shot that the crown doesn't even cover the stem tube - but I'm glad to see the stem tube is still there, as it's needed for when the correct crown is installed. 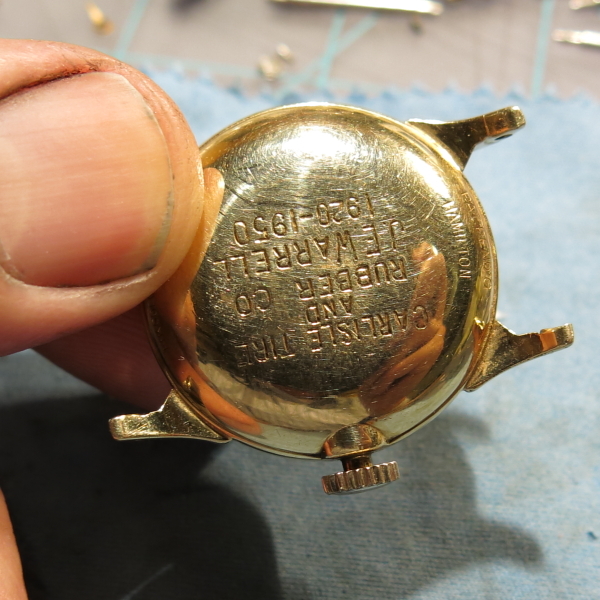 With the bezel removed, you can see the dial and hands are in decent shape.  I can tell by the finish that this is a refinished dial.  You can also see the two-piece stem that allows the movement to come out the front.  The male portion is in the movement, the female side is in the crown.  The joint must be visible so you can lift the movement straight out, as the female side isn't designed to flex at all. 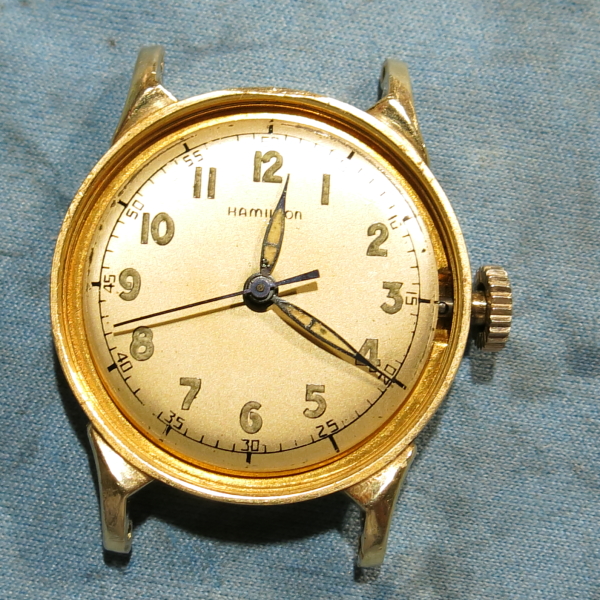 Here's a better shot of the male and female sides of the stem. 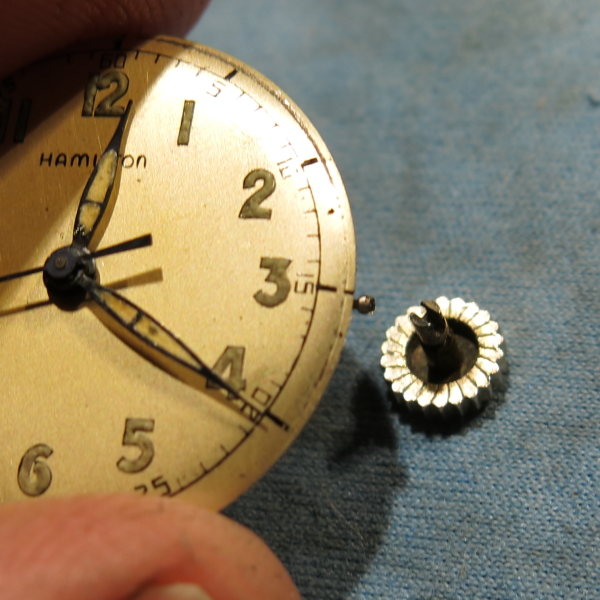 The 748 is a compact movement and the only one with five wheels in the train.  Normally there are only four.  This can be a very challenging movement to reassemble. 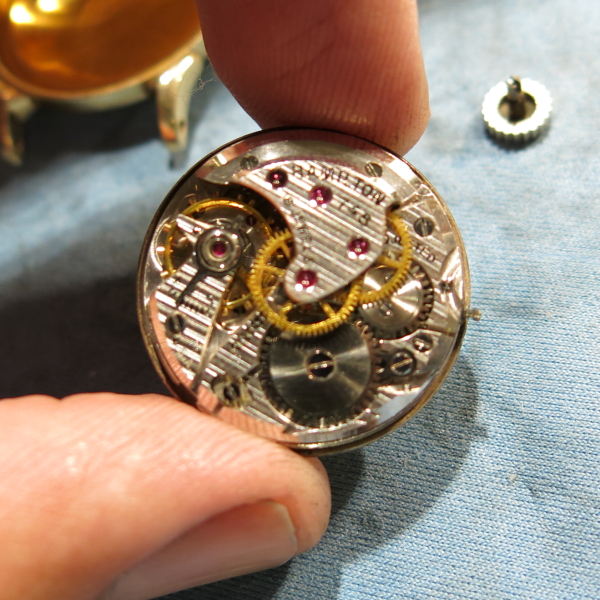 One of the things I like about solid gold cases is they never show verdigris, or the corrosion you'll find on gold filled cases.  A little polishing and this case will look much better. 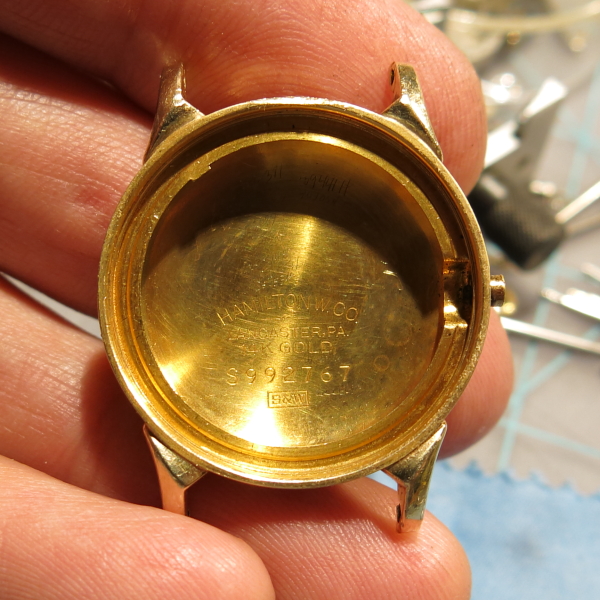 As suspected, the dial has been refinished. 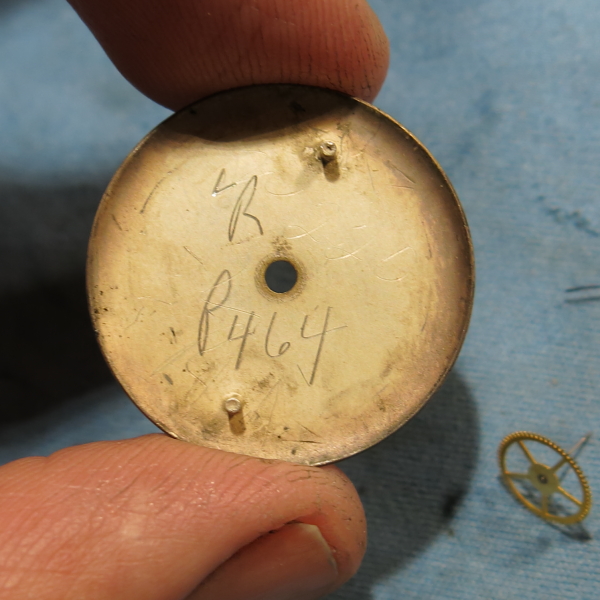 Everything is cleaned and dried.  After I took this photo I realized the balance and pallet fork weren't in it.  They were still in the hairspring cleaner and I forgot to take them out. 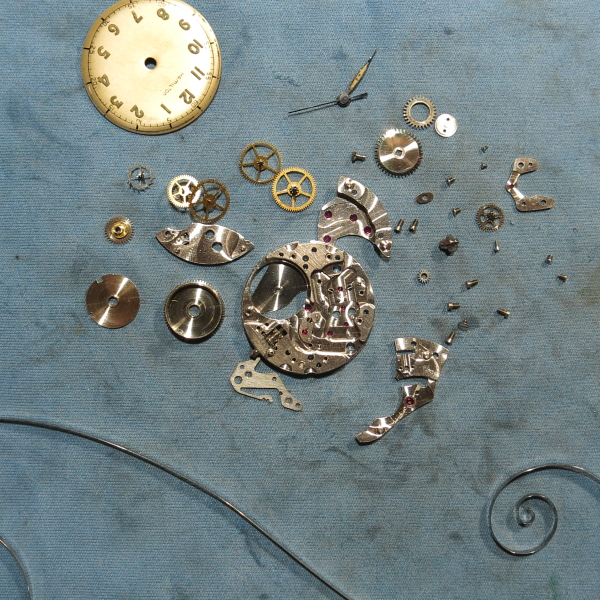 I happened to have the correct crown for a CLD model of this type - that was one of the reasons I bought the watch.  These crowns are pretty hard to come by. 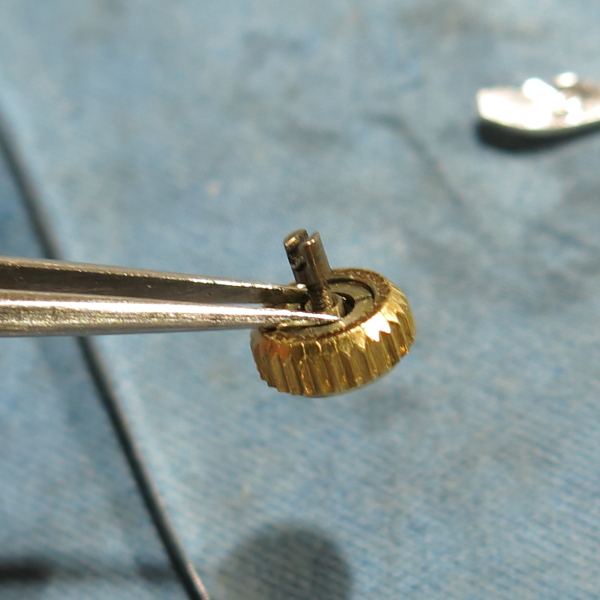 I have found a GS PA318 crystal is a good choice for a drop-in replacement of what would have originally been a double-thick glass crystal. 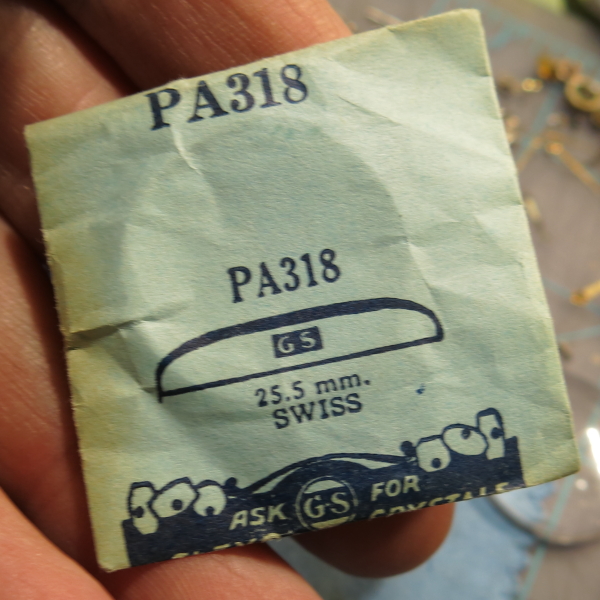 The movement has been reassembled and it's running but it doesn't "look right" to me.  We'll see what the timer has to say about it. 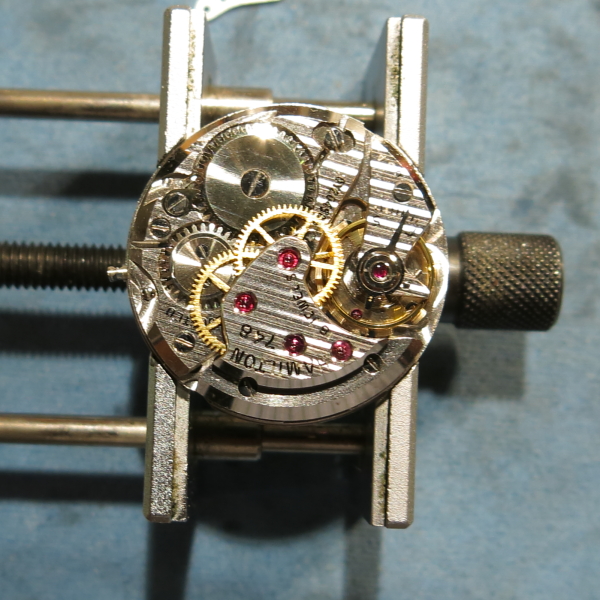 Yup - it's full of extraneous noise.  I'll reclean the hairspring and see if that fixes it. 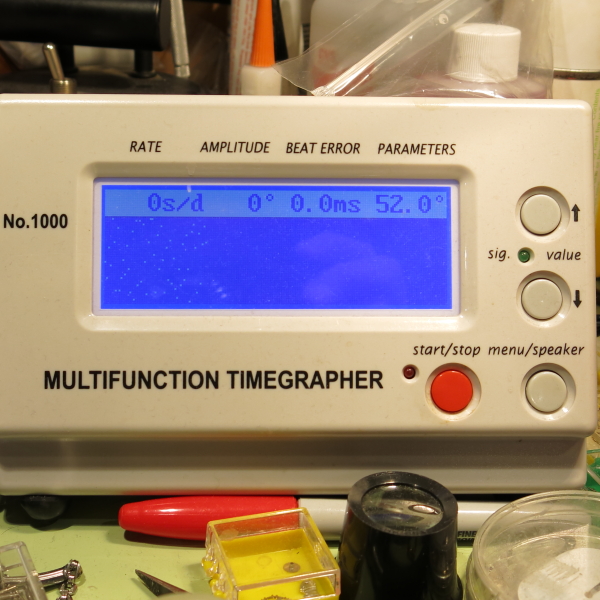 The noise is gone but now I can see that it's running well but with a high beat error.  5.8ms is too high to let go.  Ideally it would be zero but I'll accept anything less than 3.0 when it's a balance of this type.  The beat error is a measurement of how centered the impulse jewel on the balance is with the pallet fork.  If it's off to one side or the other, the balance will swing further to one side or the other and ultimately stop sooner than a watch with a low beat error. 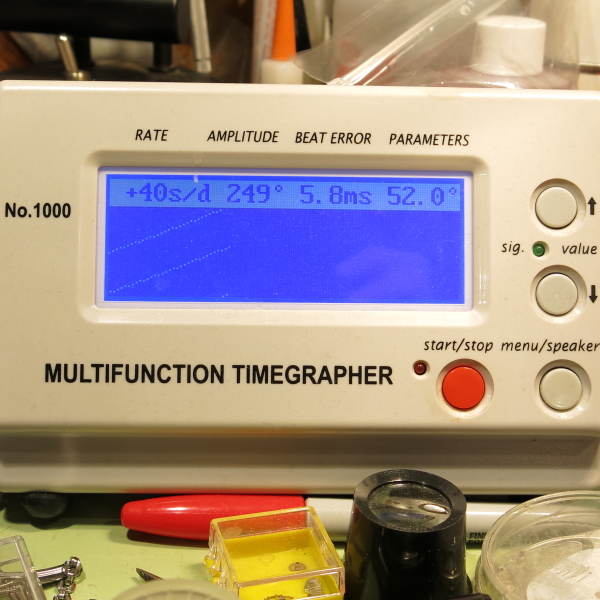 Adjusting the beat error on a balance of this design is tricky business and not for the faint of heart.  First I'll need to figure out what side the impulse jewel is on.  To do that, I'll set the regulator so that the fork lines up with the pallet fork jewel.  You can see the two gold dots of the fork directly in line with the line between the balance jewels and the pallet fork (and escape wheel in this case). 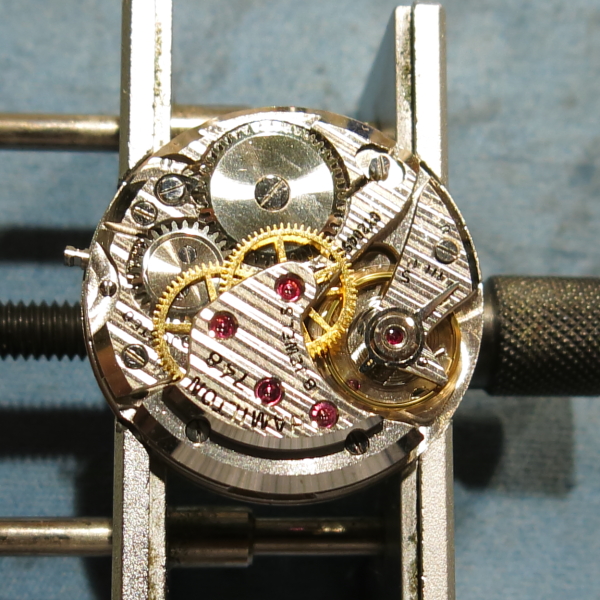 I can tell the impulse jewel is off to the right side of the regulator fork.  So I'll need to move it counterclockwise a smidgen.  To to that, I need to remove the balance from the balance cock and then gently rotate the hairspring collet on the balance staff.  Did I mention this is tricky business?  It's a great way to ruin an otherwise-okay balance. 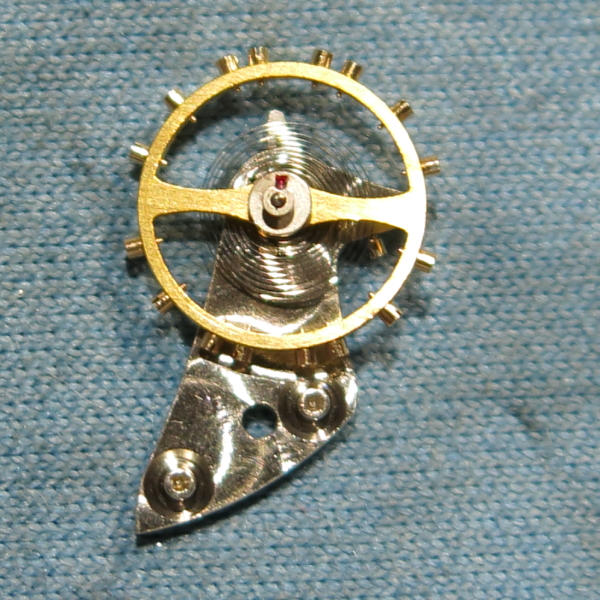 Success... the beat error is down to 2.3MS and well within my "acceptable" range. 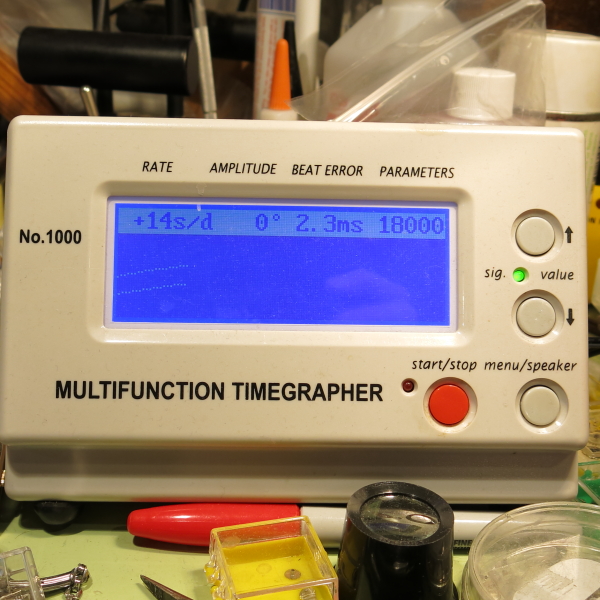 All that's left is to put the dial and hands back on and then tuck it all back into the case.

As you can see the new crystal is a vast improvement over the monstrosity that was installed previously.  The correct crown and a vintage genuine tortoise strap are the perfect complement to this newly restored watch. 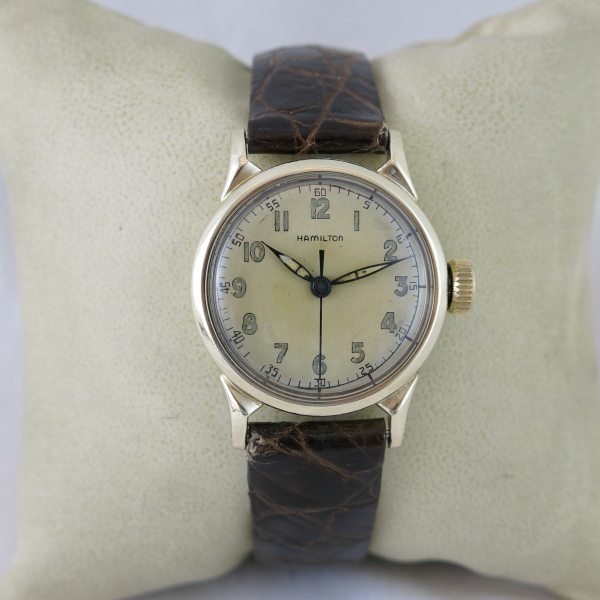