A good example of a "tweener" is the 1959 Farrell.  At first blush it looks like a typical 1950's model with what would probably be a 17 jewel Swiss-made 673 behind the dial.  However, you'd be wrong to assume that because the Farrell actually has a 17 jewel USA-made 730 under the hood.

In 1959 it came on a strap or bracelet, the latter being a leather / metal combination used on several models from the same period.  The case was comprised of a 10K gold gold plate (RGP) bezel with a stainless steel snap-on back. 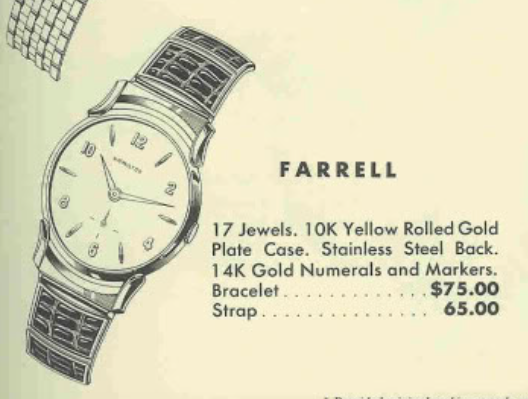 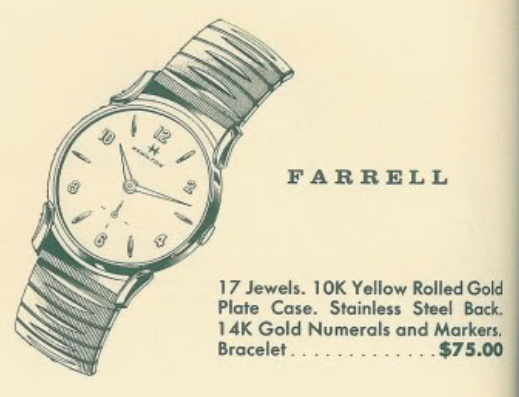 You don't tend to see the Farrell to often in the wild.  I'm not sure why that is but I suspect it was simply because it was more expensive than similarly designed models that used a Swiss movement.  For example, the 1958 Lowell is quite similar and was priced at $47.50... considerably less than the Farrell.

I recently received a Farrell in serious need of some TLC.  In fact, you would think that it arrived by boat, as it was an off-white green color as if it was sea sick.  The dial was green and spotted with what looks like mold or something.  The watch still has it's original bracelet... it's a bit corroded too but it's a nice find and dates this watch to 1960 or 61. 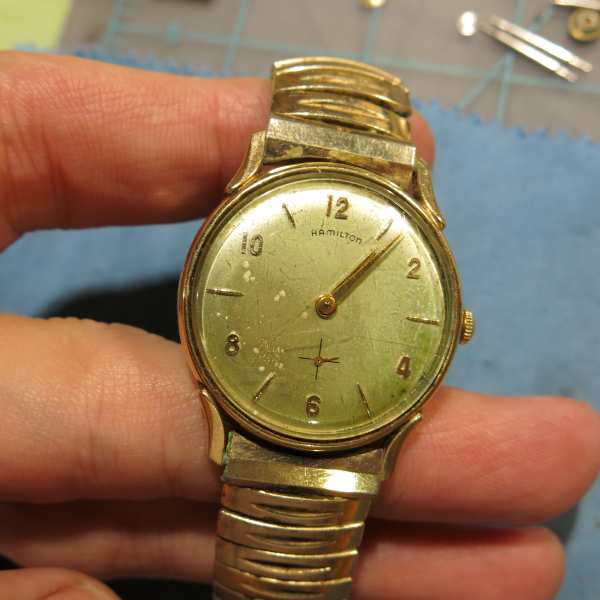 There was a lot of corrosion around the watch with pitting and gunk galore.   The worst section appeared to be the spring bars.  They were frozen solid and reminded me of what sometimes happens to old batteries if you don't remove them from electronics. 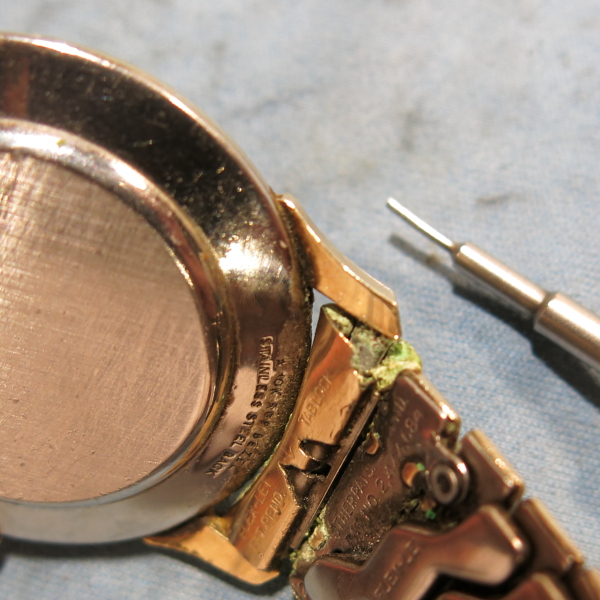 In the shot below you can see that a portion of the spring bar is stuck in the case lug.  That was actually the case with three of the four lugs. 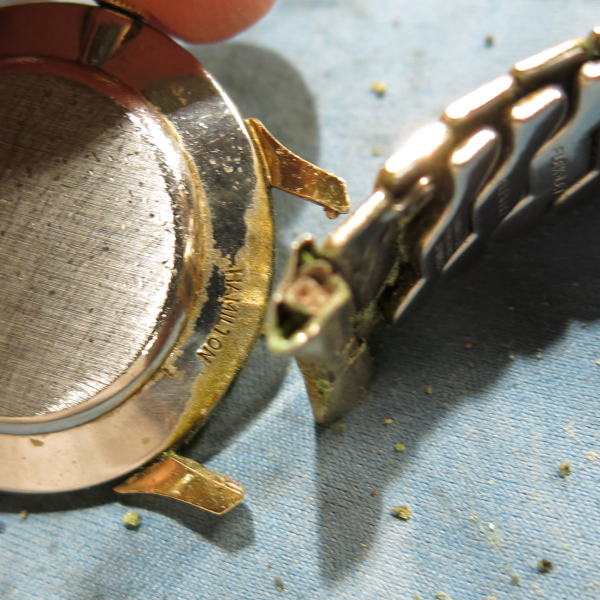 With the bracelet off I can turn my attention to the inside of the watch.  I don't know when the last time this watch was overhauled but I wouldn't be surprised if the answer was "never".  It's filthy inside. 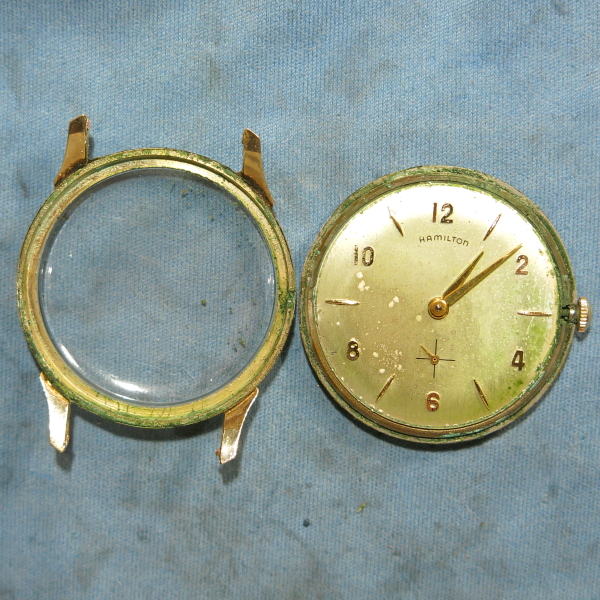 The old spring bar tips were frozen solid and didn't budge.  The only way to clear the holes for new spring bars is with a tiny drill bit. 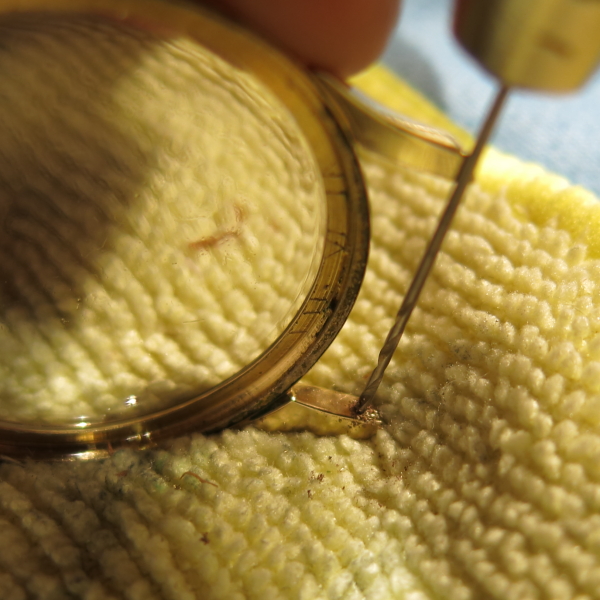 Surprisingly, the movement itself is in nice shape... a true testament to the quality of Hamilton movements. 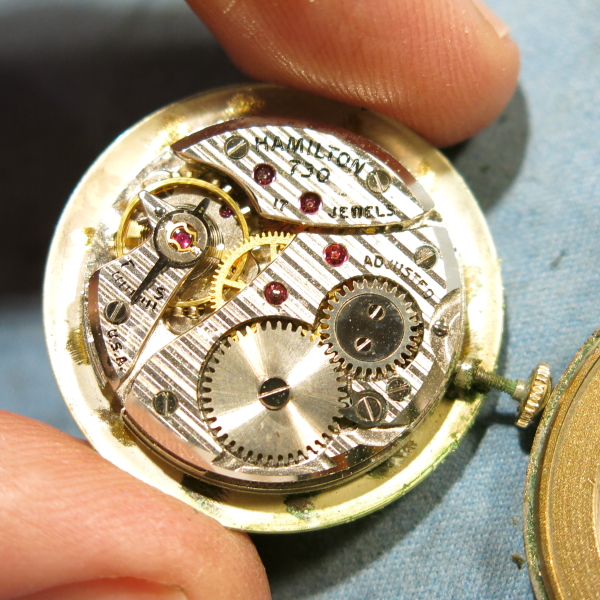 Everything is thoroughly cleaned in the ultrasonic.  The dial cleaned up "fair"... it still shows some spots and a little green speckling but it looks way better, as you'll see in a bit. 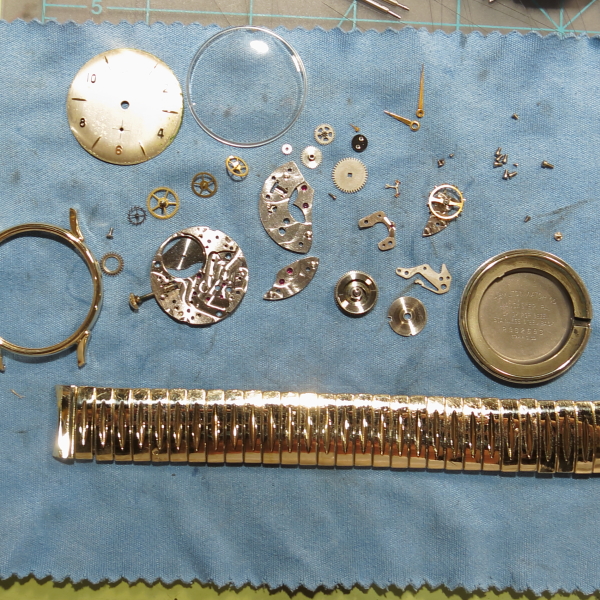 The 730 is almost identical to the earlier 747 grade, with the exception being the balance is shock jeweled to protect the delicate balance staff. 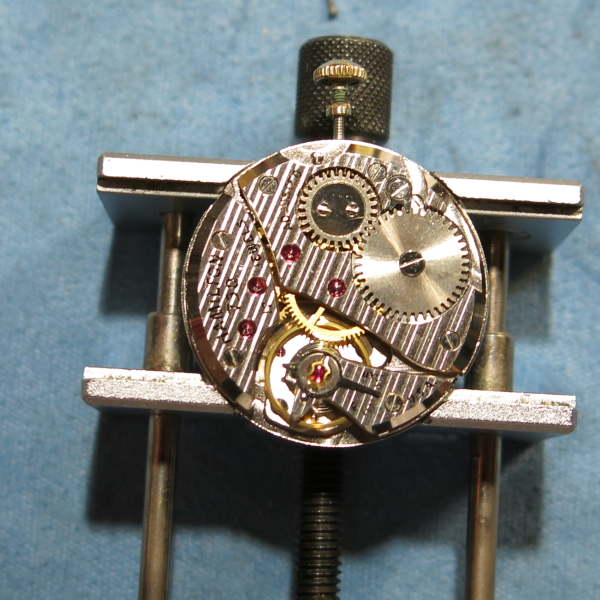 The timer reveals that everything appears to be in good order.  It's running about one minute fast per day but I can slow it down with a slight adjustment to the regulator. 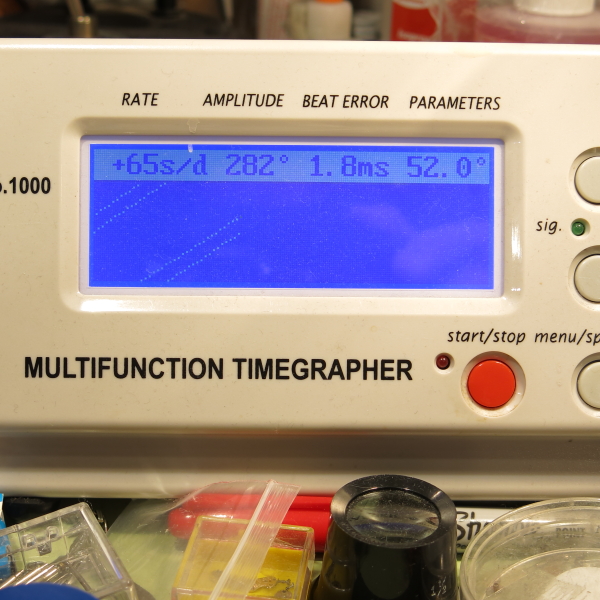 The two lines representing the beat error and beat rate are approaching horizontal.  The distance between them is the beat error (the closer they are the closer the error is to zero) and the slight upward trend implies the watch is running a smidgen fast.  You can see how the trend on the right of the screen decreases as I moved the regulator towards "slow".  As the lines wrapped over the left side of the screen the two lines approached horizontal. 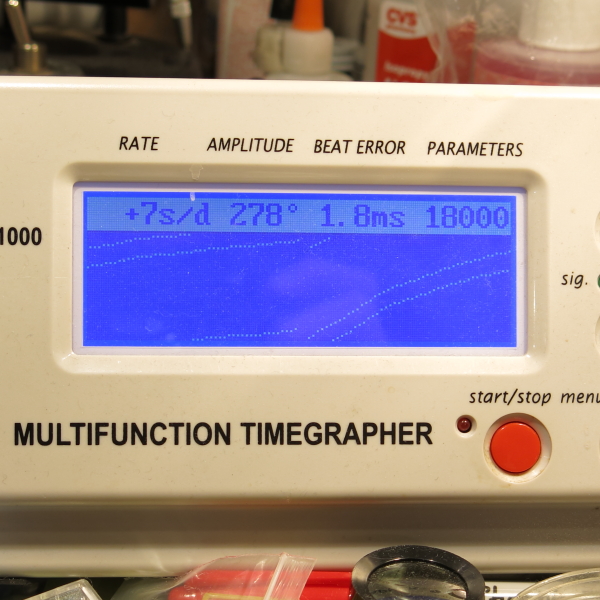 With the watch movement back in good health, all that's left is to reinstall the dial and hands and tuck it back into the freshly polished case.  The dial looks much better but it's not perfect.  It could be made to look like new by refinishing it but that's a personal judgment call at this point... a decent original dial is usually preferable to a perfect refinish.  If the dial was worse it would be an easier decision.  This one is a tough call. 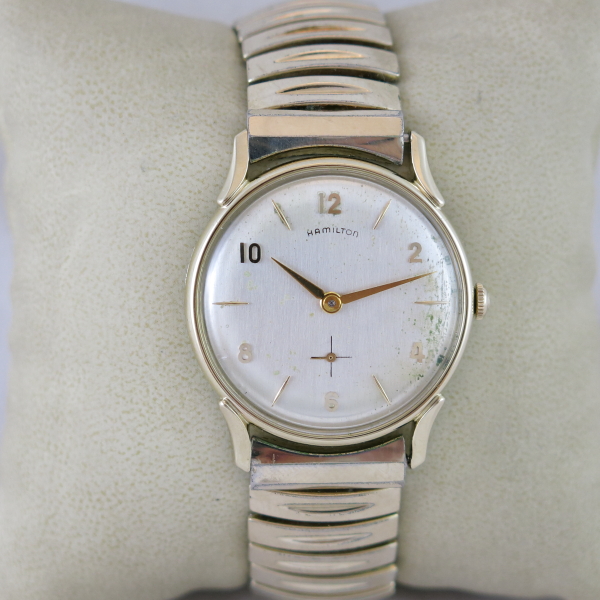