It would have been interesting to be a fly on the wall in Hamilton's board room while they talked about their strategic plan in the 1950's.  I bet it was not unlike what has happened in the last 15 years in board rooms around the US.  The fundamental question on the table was, "How do we compete in an ever-increasingly competitive global environment?".

In the early 1950's America was thriving in a post-WWII economy.  People had jobs, they bought houses for growing families, and there was a television on every street.  Hamilton had to compete with other technological advances that consumed discretionary spending, not just with other watch companies.  Sound familiar?

On the other hand, Europe was recovering from an apocalyptic war.  Labor was cheap and quality was good and getting better.

American brands started to use European movements more and more in their product lines... or they shut down entirely.

In 1953 Hamilton introduced their first models with Swiss-made movements.  They also reintroduced the Illinois brand that they purchased the Illinois Watch Company in the 1920's.  The Hamilton Illinois model line offered new price points for Hamilton as well as new capabilities like automatic (self winding) movements and date complications.

As an old Navy salt, I have an affinity for John Paul Jones, the father of the United States Navy.  Everyone has heard John Paul Jones's famous quote, "I have not yet begun to fight!" but I personally get the most inspiration from...

"It seems to be a law of nature, inflexible and inexorable, that those who will not risk cannot win." 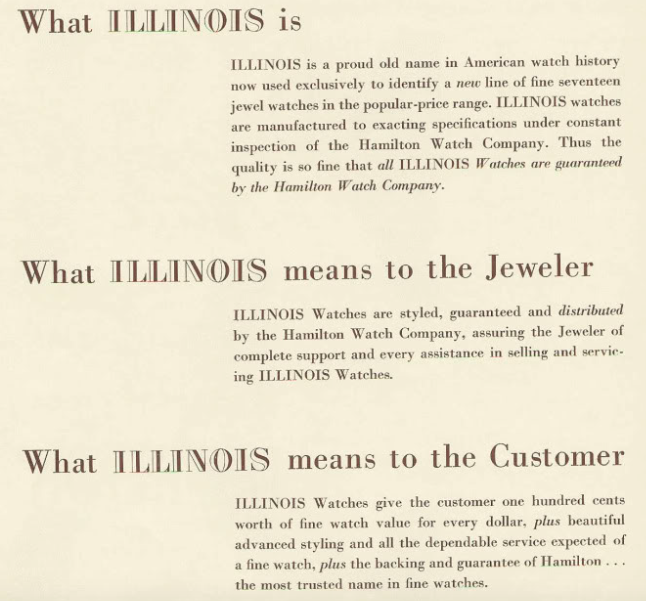 The new Illinois watches were not as glamorous as their Hamilton cousins.  All of the manual-winding men's models were part of the Debonair series and known by their model letter.

For example, there was the Model C.   It featured a rolled gold plated case with a stainless steel back, a Swiss-made Illinois-branded movement, and an embossed dial.  You had a choice of a pigskin strap or a matching bracelet. 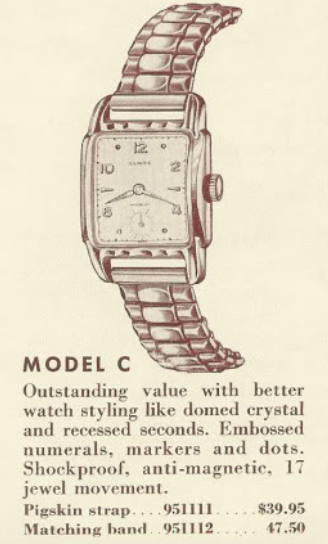 By 1956 Hamilton executives must have realized the sky had not fallen.  Many of the formerly Debonair models became official Hamilton models and the Illinois line was phased out.

The 1953 Model C was rebranded as the 1956 Clive.  It came with a new bracelet style at the same price point.  It was only produced for a single year. 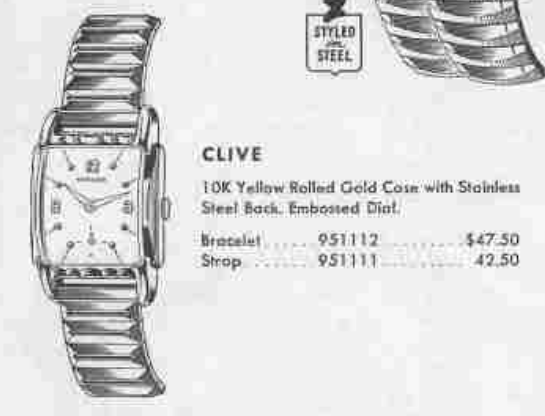 My Clive project watch arrived with "good bones".  The case was in nice shape and the dial looks pretty good as well. 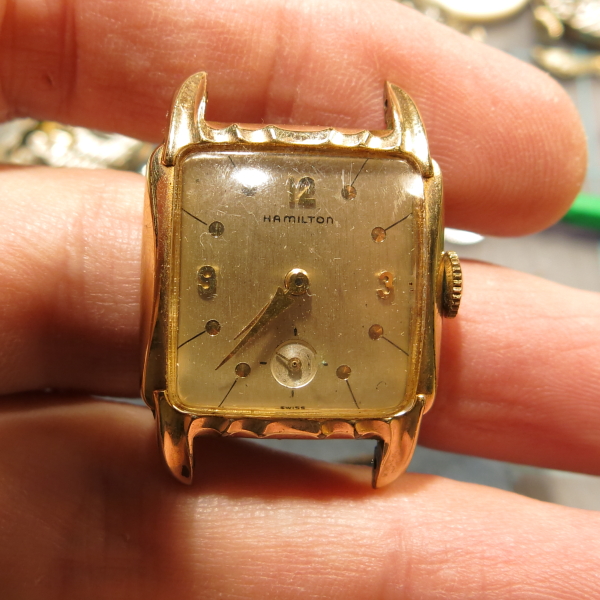 The case back is a carry over from the Illinois days and still says Illinois on the back.  I think the Clive existed for as long as Hamilton had remaining inventory to use up. 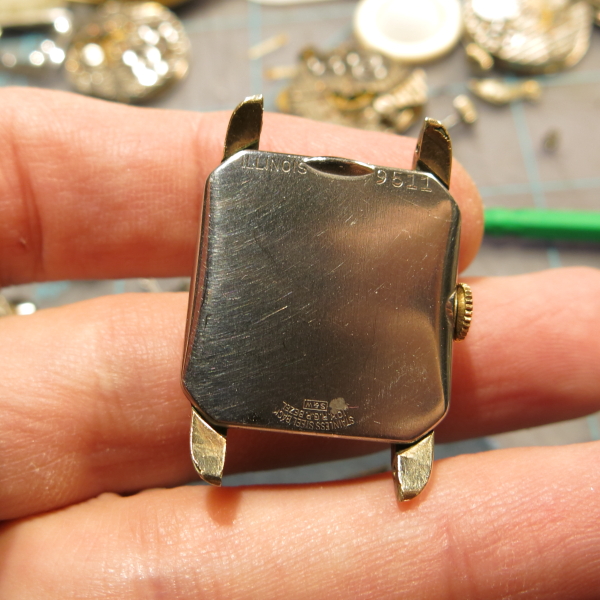 The silver butler-finshed dial is in good shape.  I don't see any obvious signs that it's refinished... the printing looks good, alignment with the markers is spot-on, says "Swiss" at the bottom of the dial, which was required because of the Swiss-made movement. 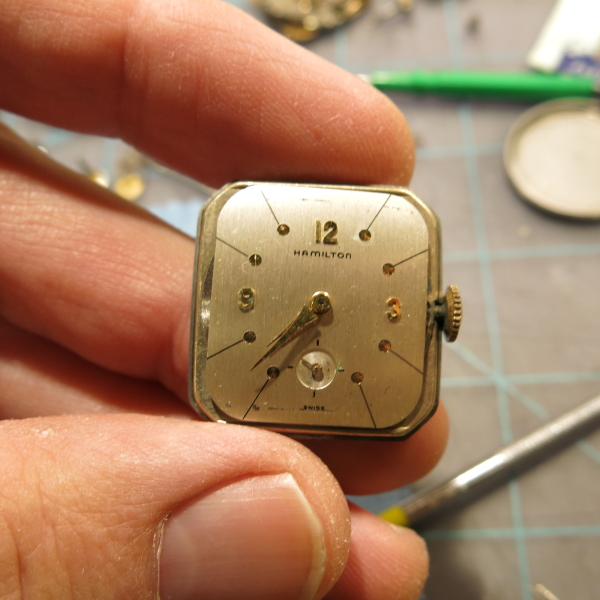 Authentic Hamilton models will usually say "Hamilton Watch Company, Lancaster PA" inside the case back - one exception being when it say's Illinois on the outside. 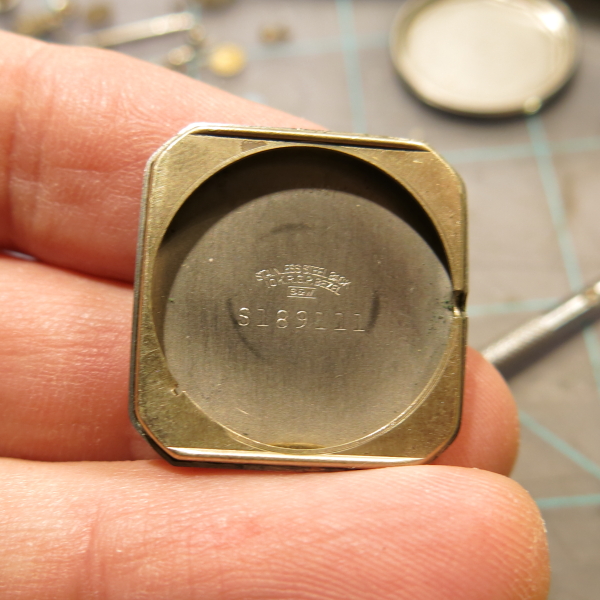 This watch is not running - at all.  The balance looks okay so hopefully it just needs a good cleaning. 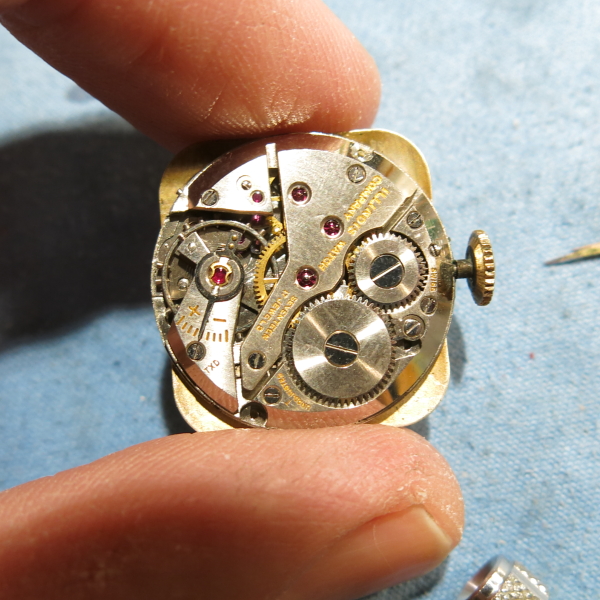 While taking it apart I saw the escape wheel had grown a tail... a hair of some sort has adhered itself to the wheel.  It doesn't take much to prevent a watch from running and this would certainly do it. 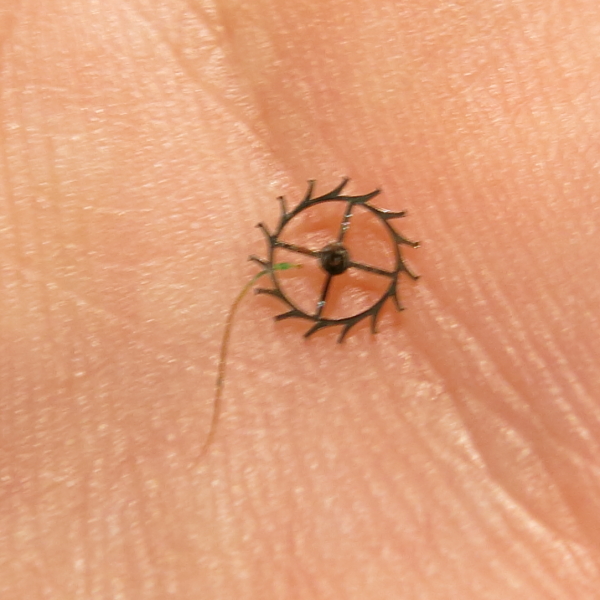 Everything is closely inspected after being cleaned.  It all sparkles like new. 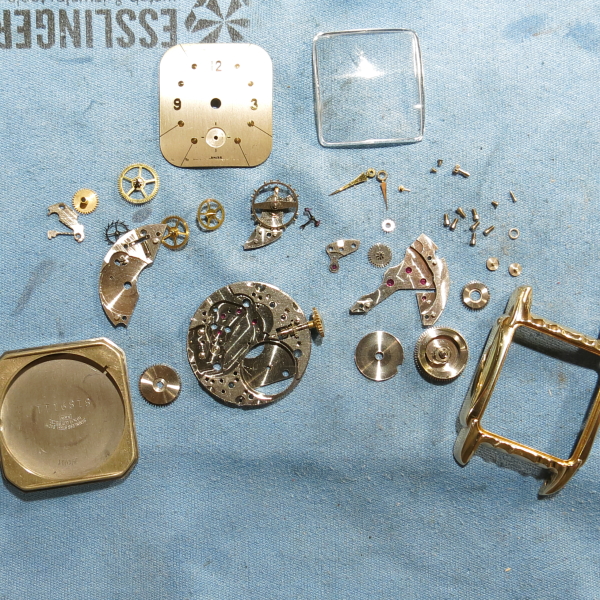 After being reassembled, the movement is now ticking aways briskly. 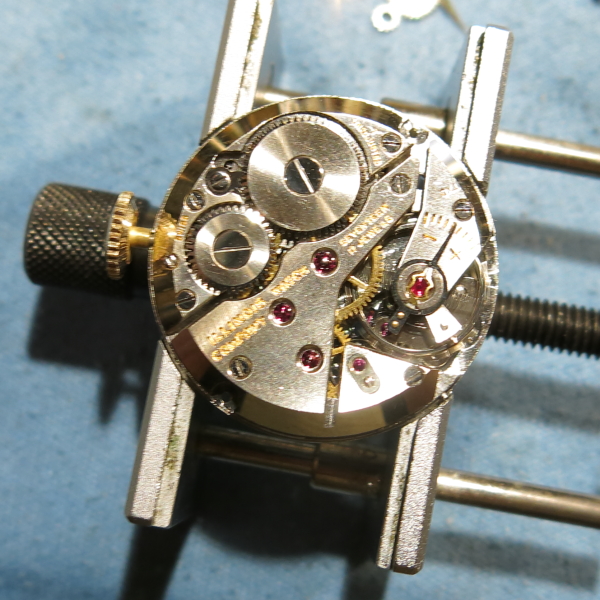 Based on the timer, the watch is running a little fast.  The amplitude is over 200 and the beat error is on the high-side of acceptable.  It's not easily adjusted on this movement and I don't want to goof it up.  So a simple tweak to the regulator is all I'll attempt at this point. 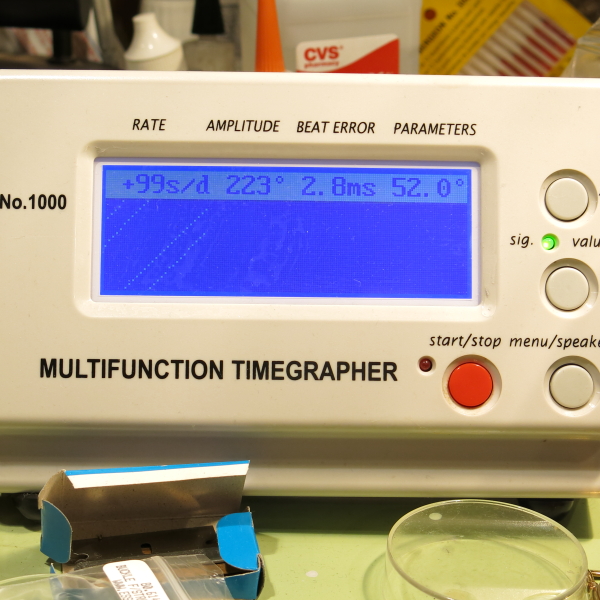 There, the beat rate is much better now.  5 seconds fast per day is a good stopping point, in my opinion. 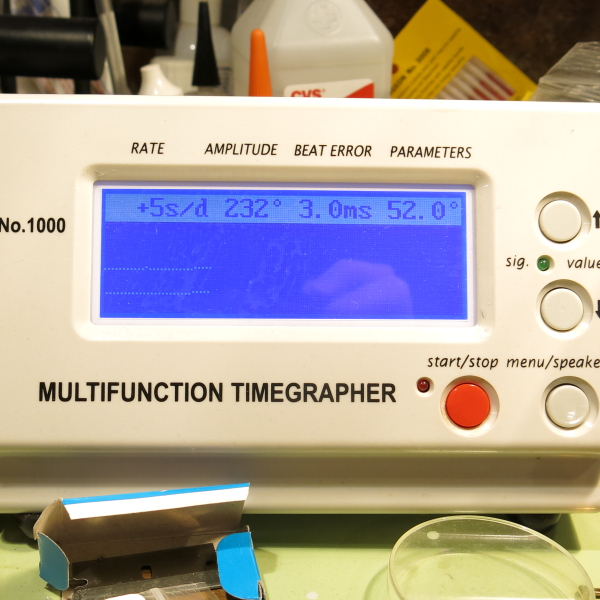 The minute hand on this watch looks a bit odd, to my eye.  I doubt it's original.  I'll have to see if I can find some better alpha-style (aka pointex) hands.  This movement has hour and minute hands with 1.30 an 0.70mm hole sizes. 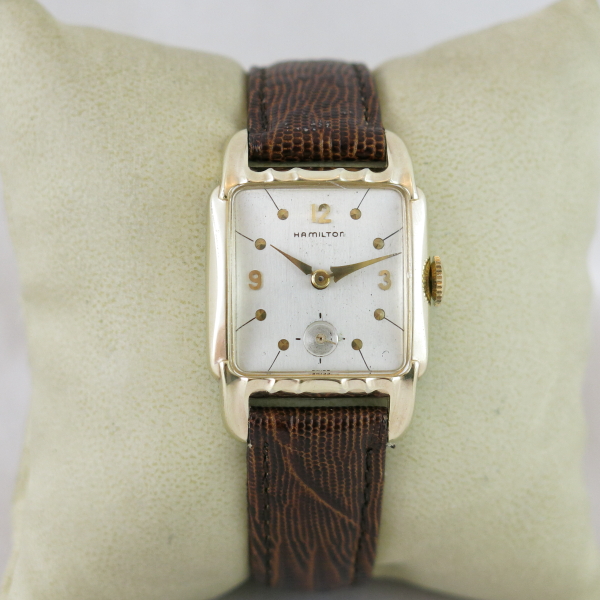 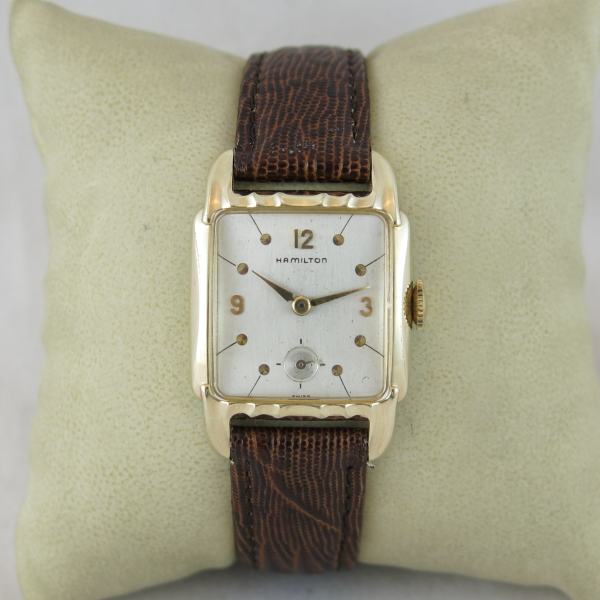