Most Hamilton collectors I know are mindful of the end of US production in 1969 but not overly concerned about collecting only pre-1969 models.  Although Hamilton has a proud heritage of made-in-the-USA watches, not all pre-1969 watches used movements that were made in Lancaster, PA.  In fact, some of the most innovative models used Swiss-made grades from a variety of makers.

Most of the calendar models were also automatics but there are a handful of manual winding calendar models too.  One of the is the 1968 Dateline S-577.  It was produced for only two years. 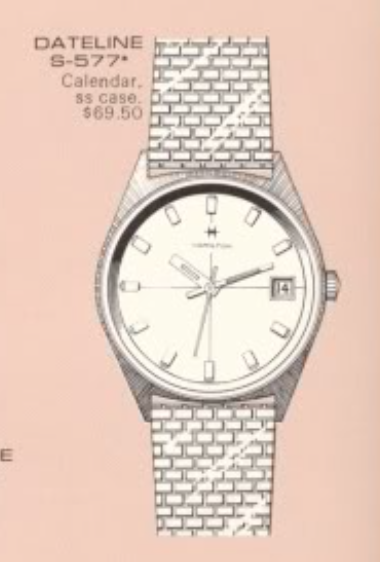 The Dateline S-577 is an awkward looking combination of 1960's and pre-1970 styling.  It has a traditional one-piece stainless steel case with brushed finish.  The silver dial has rectangular hour markers along with a rather wide hour hand and a very skinny minute hand.  It reminds me of a fiddler crab. 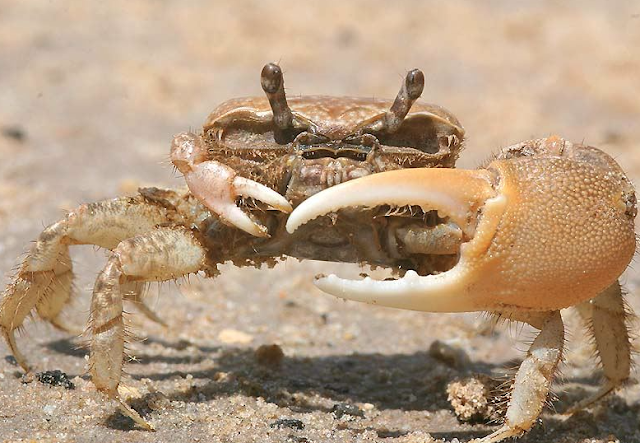 Inside t.he case is a 17 jewel Hamilton 674 movement.  The 674 movement is basically the same setup as Hamilton 688 movement, but it has a date complication.

I recently landed a Dateline S-577 and it arrived in decent condition.  The second hand was a little bent so it hit the minute hand and stopped the watch. The minute hand is so thin, you can hardly see it compared with the second hand. 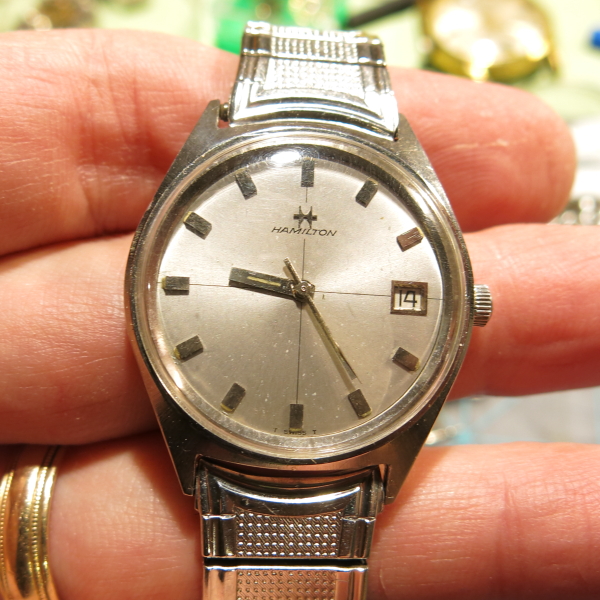 Looking at the case back, it's easy to see that this is a one piece case and the watch opens through the crystal. 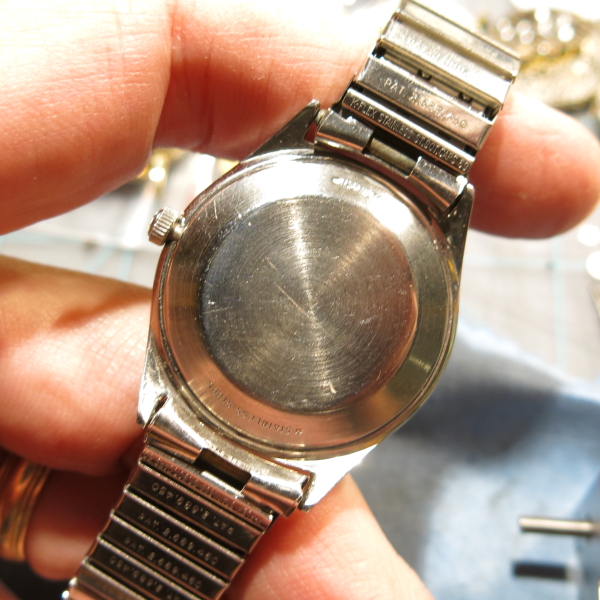 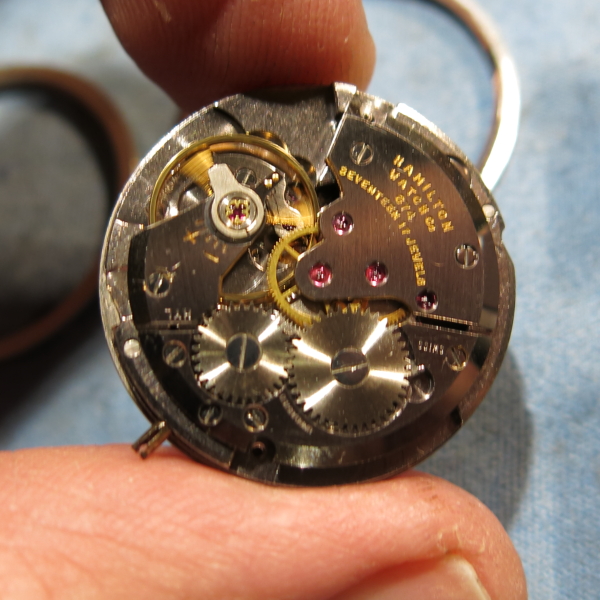 Once the dial is removed, you can see the variety of parts that make up the date complication.  The hour wheel in the center (that the hour hand attaches to) drives a wheel that drives a smaller pinion that drives the date wheel.  There are a couple of critical springs that enable the mechanism to index the date wheel one date at a time.  I'll show you how it goes together after it's cleaned. 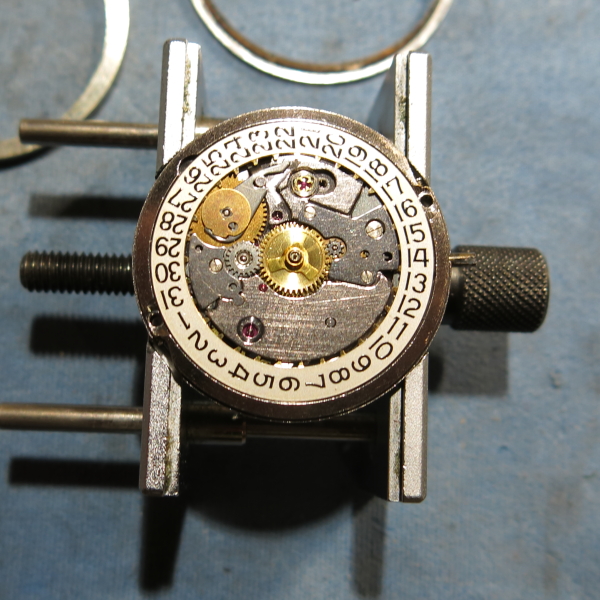 The date complication adds about twice as many parts to the movement over a basic manual winding grade.  This watch also has a movement ring to fit into the case and a reflector ring that goes around the dial.  It's all cleaned now and ready to go back together. 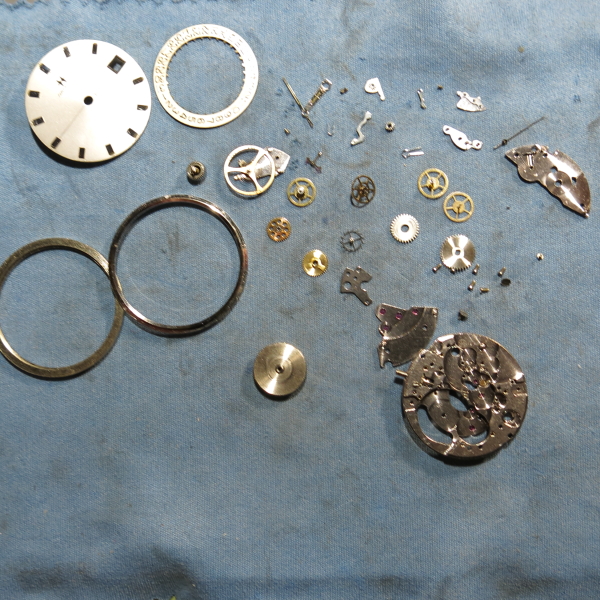 The first parts back on are the center wheel, which is off center, the third and fourth wheel, and the escape wheel.  The train bridge covers all four at one time. 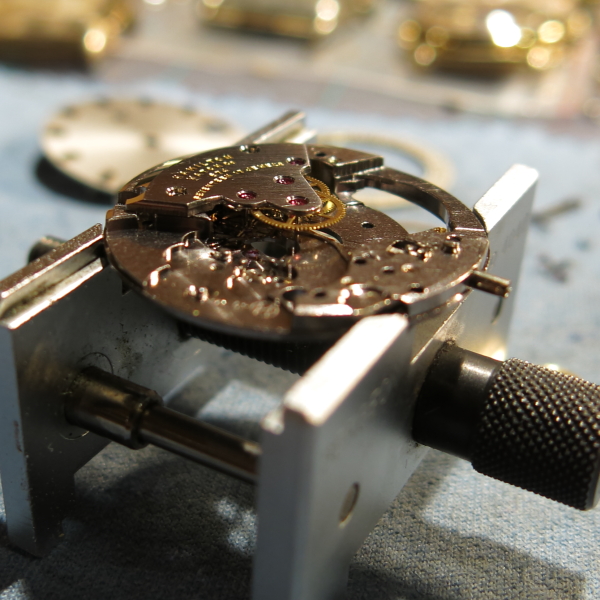 With the train bridge secured, the pallet fork goes on next, along with it's bridge. 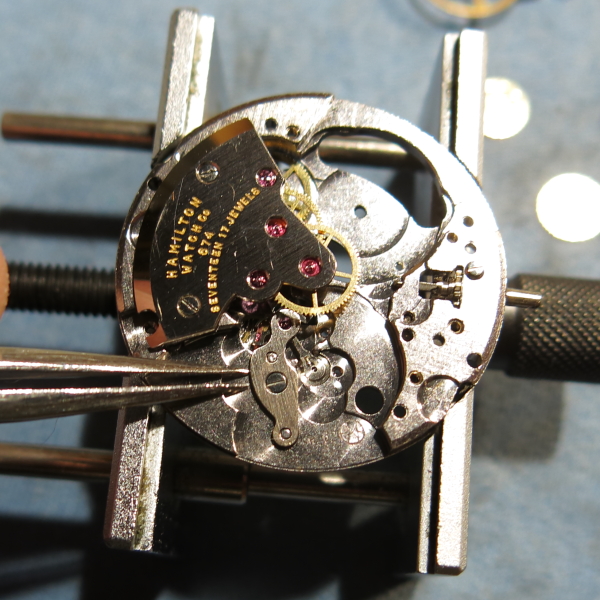 Next, the mainspring barrel and the barrel bridge go into place.  I can give the mainspring a few winds to energize the watch.  Sorry for the blurry photo! 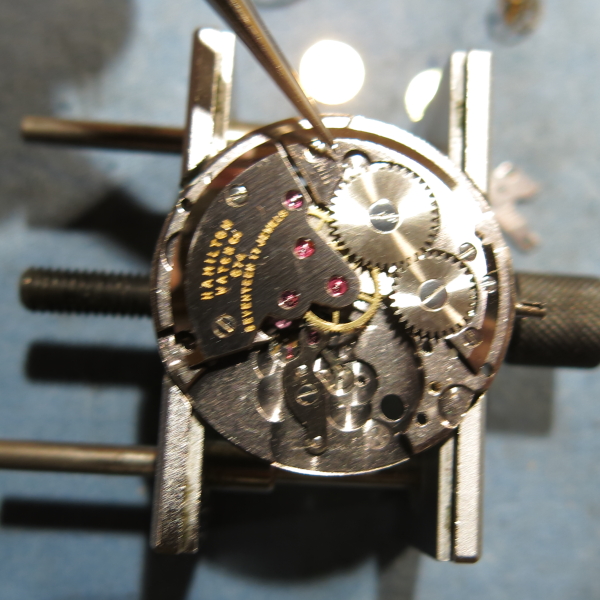 The now-running movement goes onto the timer to see how it's running. 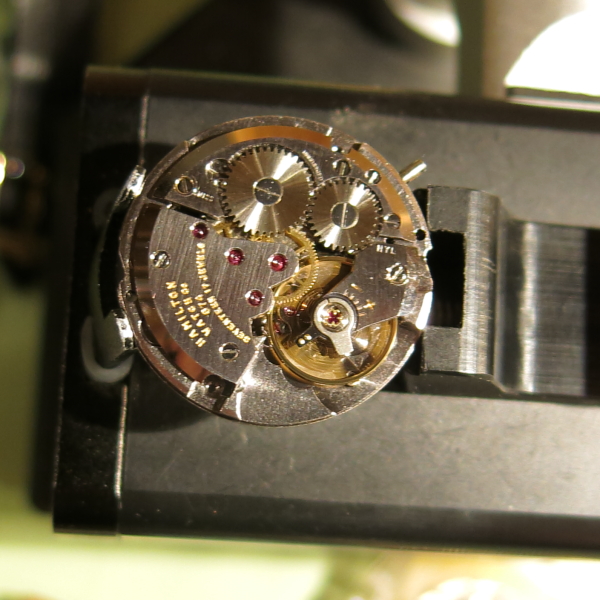 Good amplitude but a high beat error. That's easy to adjust though.  There's a little extraneous noise too.  Upon close observation there was a tiny piece of lint attached to pallet fork bridge. 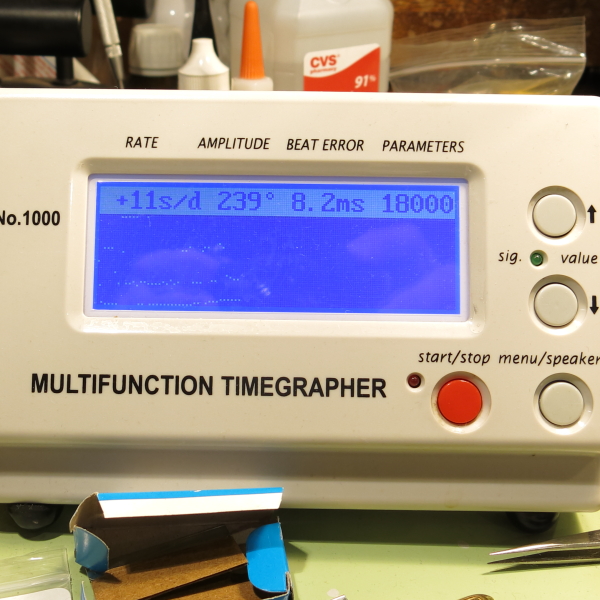 There, a few tweaks to the hairspring stud and the timing is brought right in line. 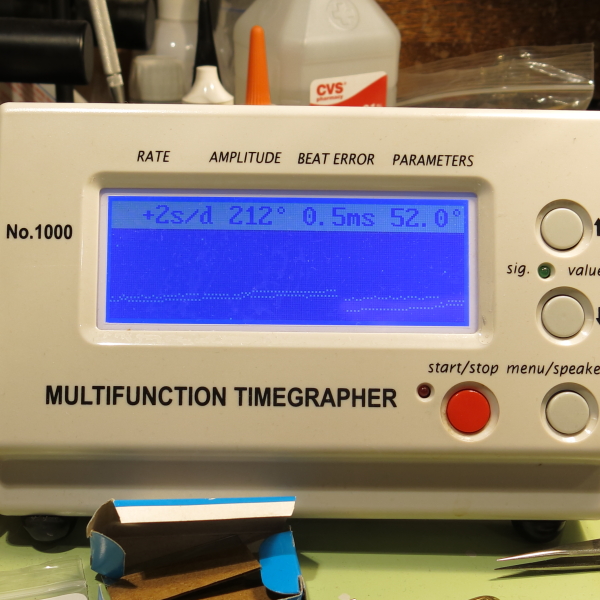 Now I can turn my attention to the other side of the movement.  First I'll put some oil on all the moving surfaces of the date indexing parts. 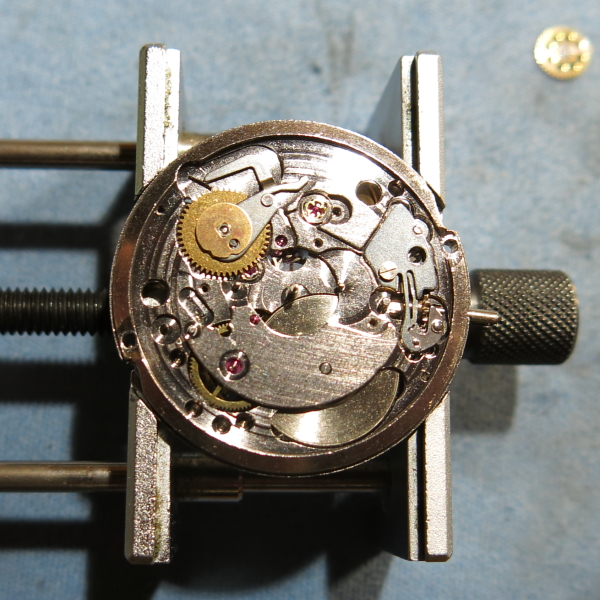 A little oil is applied between the cannon pinion and the brass wheel surrounding it. 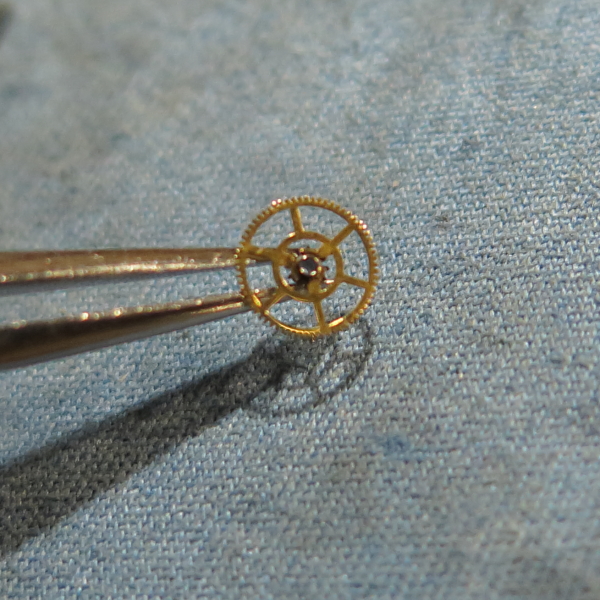 The minute wheel and the setting wheel go on next, along with the wheel to connect the hour wheel to the date complication. 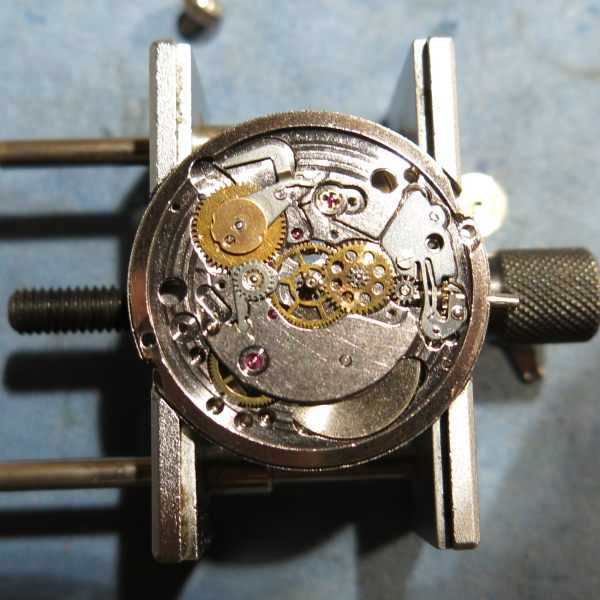 For the next couple of steps I moved into my light tent because the next two parts are so small that they are very easy to lose if they are dropped.  One of them is a spring - and it's prone to flying off into the ether. 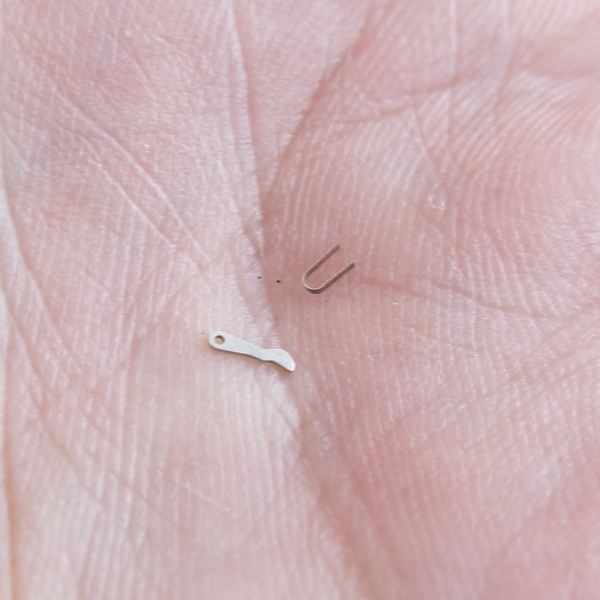 I need to rotate the indexing wheel so that I can get the date wheel into position. 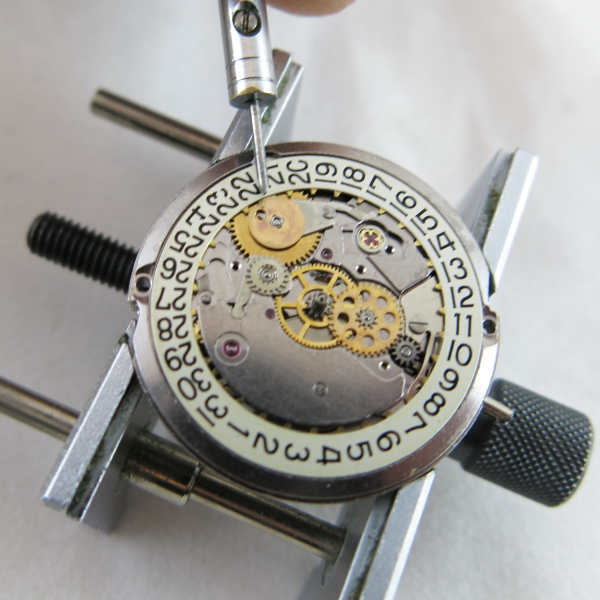 Now the tiny index lever and spring go in next. 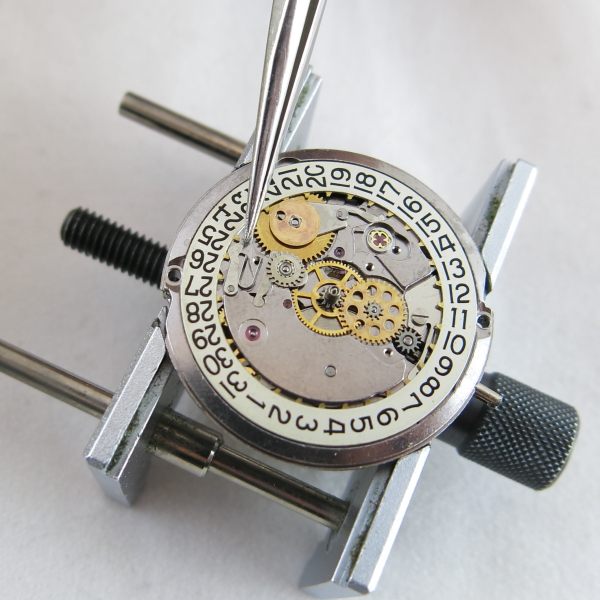 There, it's in position and I haven't lost it... phew! 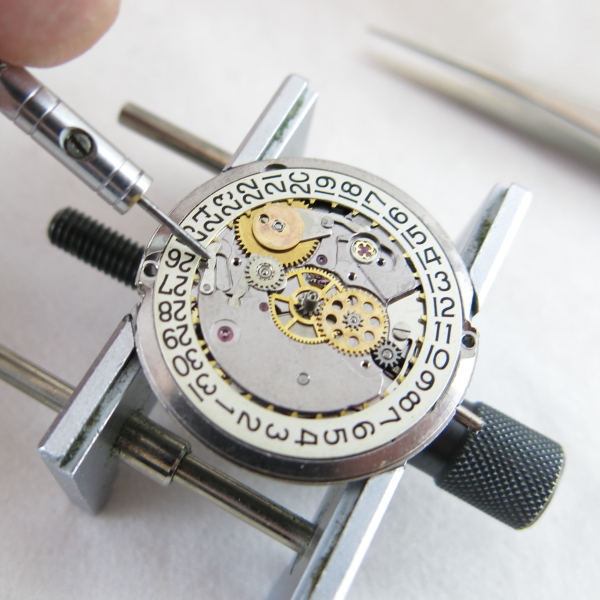 I can breathe a sigh of relief once the cover goes over the date-related parts. 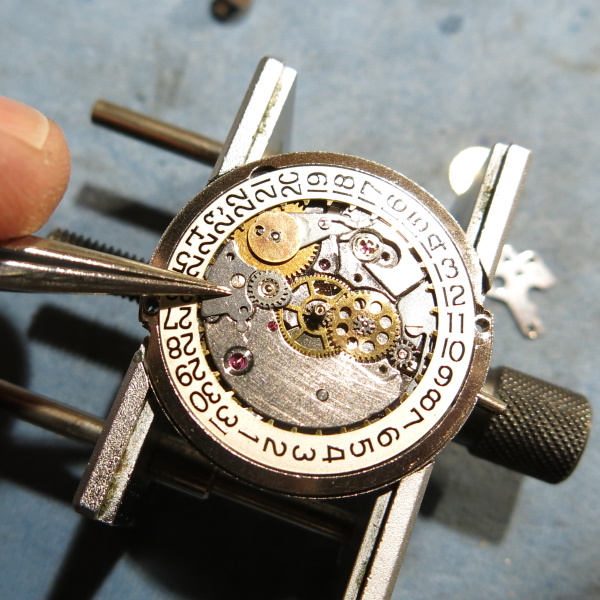 And the set bridge goes on next to cover the setting wheel and minute wheel. 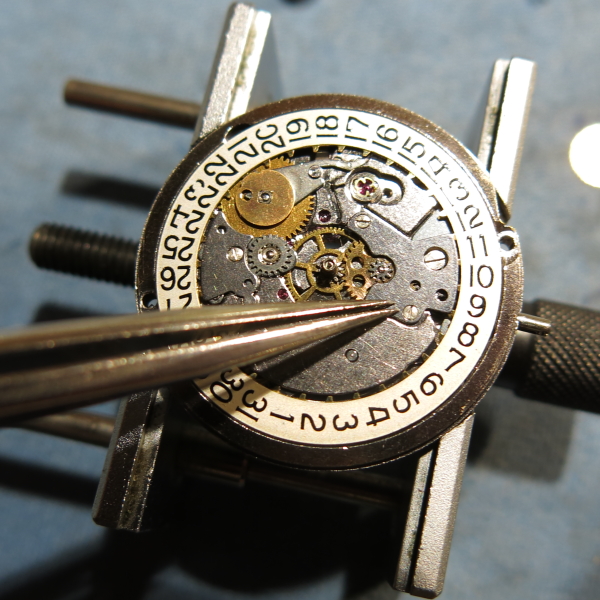 And finally the hour wheel goes on last... mission accomplished. 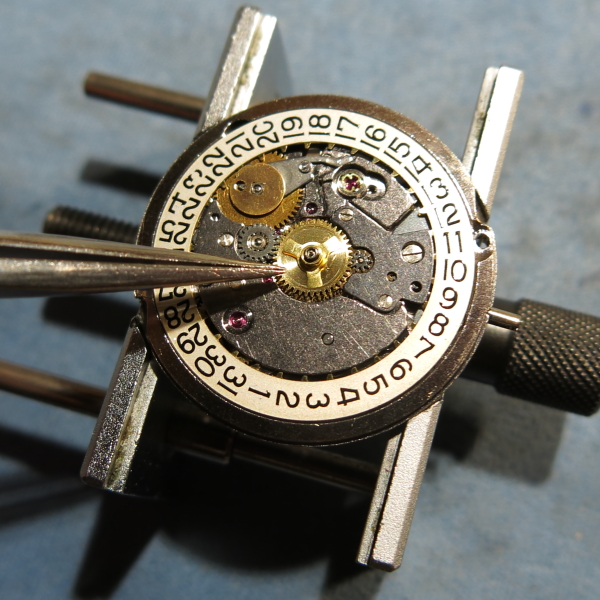 A new crystal will give this watch a like-new appearance. 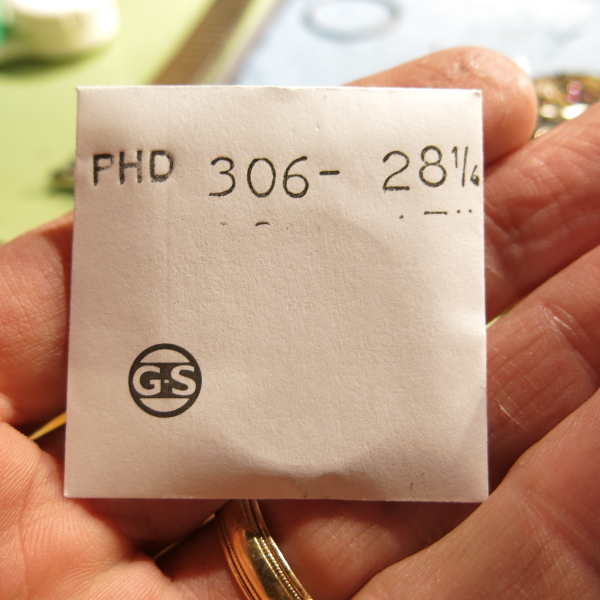 One of the requisite steps for a date model is to set the time to midnight before putting the hands on.  With any other model you can just put the hands on, but with a calendar model you need to put them on once the date switches. 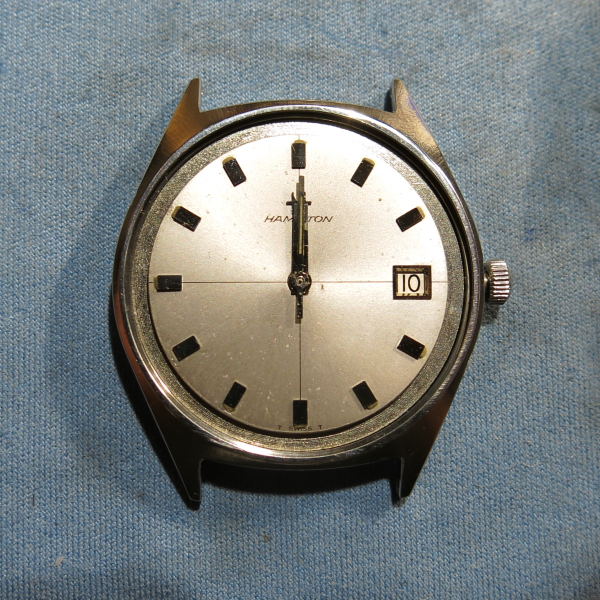 I didn't care much for the Speidel bracelet that came with the watch.  It wasn't a good match with its curved ends.  A brown strap is my choice for now.  You can't really see the second hand because it's aligned with the line at 30 seconds, but it's there.  The dial has a few spots that I couldn't remove but it looks a lot better than my camera makes it out to be.  It's not a bad look watch, even with the fiddler crap hands. 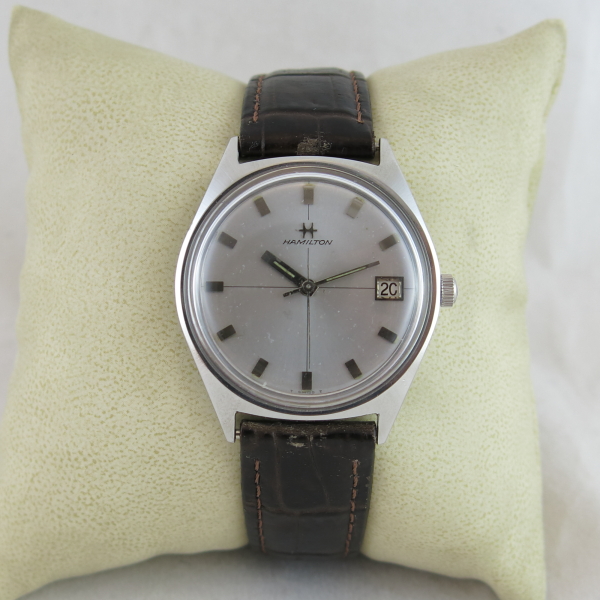