1935 was a milestone year for Hamilton Watch Co.  Technologically the Elinvar hairspring started to be used in wrist watches.  In addition, two new smaller 14/0 size men's movements were introduced - the 17 jewel 980 movement for gold filled models and the 19 jewel 982 movement for the solid gold models.

I think I have already restored the majority of 1930's 14/0 models in Hamilton's line up.  Actually, it would be more accurate to say I've restored the models that are easier to find.  It would be another thing entirely to say that I've restored every variation of the 14/0 sized models - as there often are different dial patterns and case materials to choose from.  There are also a couple of exceptionally hard to find models so those might take a while.

Anyway, I can check another one off the list - it's a 1935 Custer.  The Custer was made for only two years.  It's easily confused with 1936 Dorsey and 1937 Cameron based on the overall shape.  The easiest way to identify it is by the shape of the numerals on the AGN dial - as they are similar to the older "raised gold numerals" that Hamilton used in the early 1930's.

If you look closely at the 1935 catalog snip, the Custer came in 14K yellow gold only and had a choice of an applied gold numeral dial (AGN) or an inlaid black enamel dial.  The latter has similar numeral shapes as the AGN figures.  There were different styles of hands used in the 1930's on the various models.  The Custer used "solid diamond" hands.

In 1936, an applied gold marker (AGM) dial was also introduced.  So if you wanted a complete set of Custers you'd need to find all three.  I've never seen the AGM dial in real life so I suspect it's the least common.  You can see the hand style for the AGM dial changed too.  It looks to my eye that they are  "lozenge" style or sometimes called "sword" hands.

The 14/0 movements are long and narrow so they allowed Hamilton designers to create models that were long and narrow - often so long that they curved to fit the shape of the wrist.  Since the Custer came in a solid 14K gold case you should find a 982 movement inside.

I recently landed a decent Custer project watch.  There were three obvious issues upon initial inspection; the crystal needs to be replaced to get rid of the goldfish bowl-effect, the crown is way too large in proportion, and some of the numerals on the dial have green funk around them.  The green is a good indicator that moisture had gotten under the finish on the dial.  'll probably have to get this dial refinished. 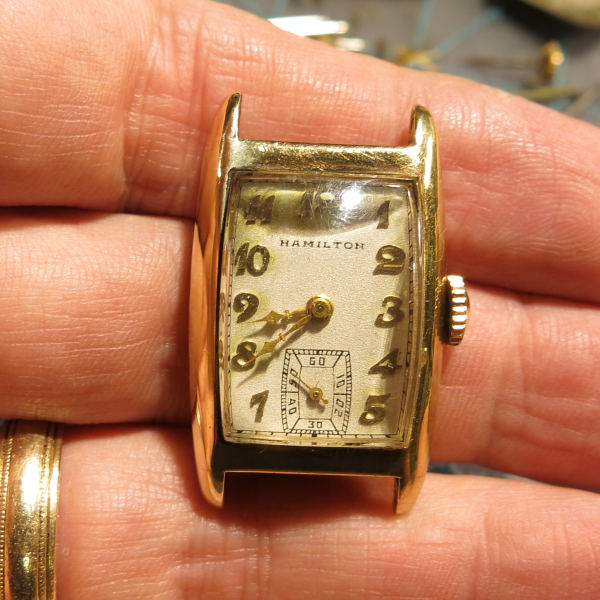 The case back is nicely engraved with a presentation for 20 years of faithful service.  When you consider that this watch was presented in midst of the Great Depression, this was quite a generous award! 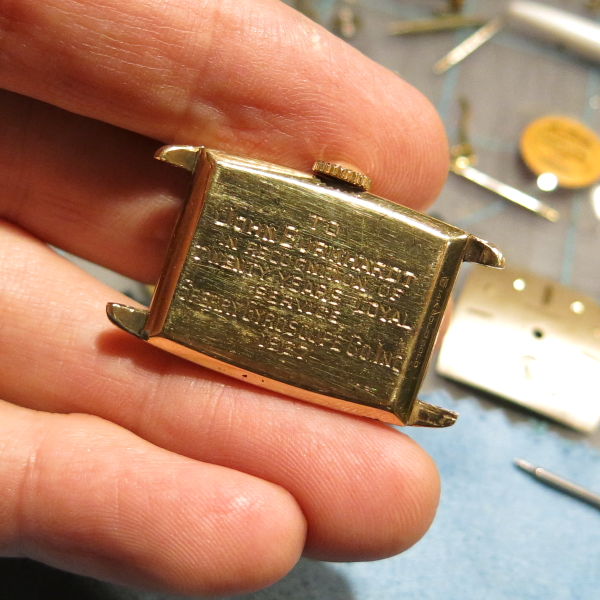 Without the bezel and crystal blocking the view, you can see the dial is in good shape other than the coloring around some of the numerals.  This white-finished dial is actually engraved in the black areas so it can be refinished to look exactly like new.   Since I know it can be redone to look perfect, there's no risk to trying to clean it up and see what happens. 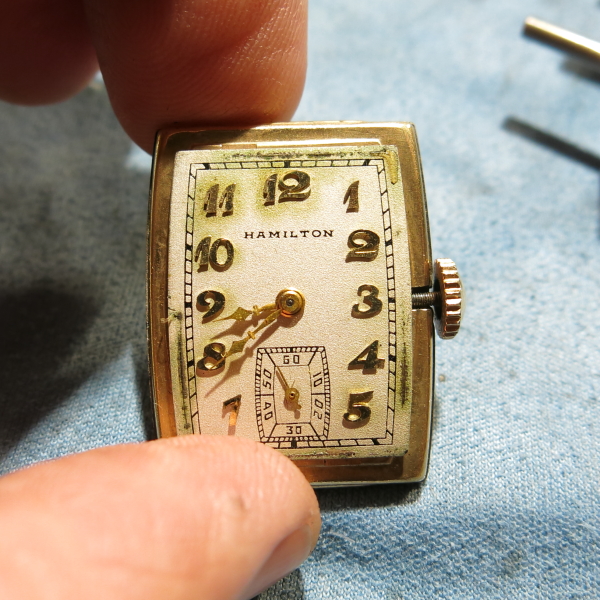 Looking at the back, the dial has already been refinished at least once based on the numbers scratched onto the back. 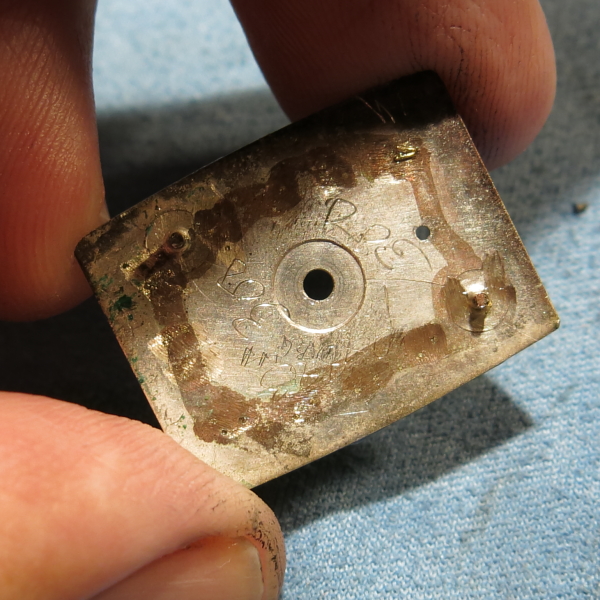 The crystal is very thick and although I know some folks like the gold fish bowl appearance, my personal taste is to keep things looking original.  So I'll install a new glass crystal once I polish the case. 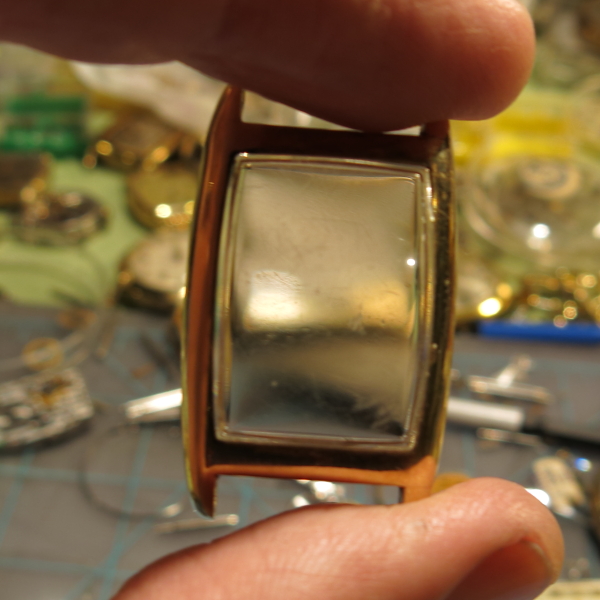 I suspect this is a 1936 Custer based on the movement serial number.  It's interesting to note that not all 14/0 movements are alike.  The earliest versions had the 980 or 982 stamped onto the balance cock.  The second generation moved the 982 to the train bridge, like shown below. 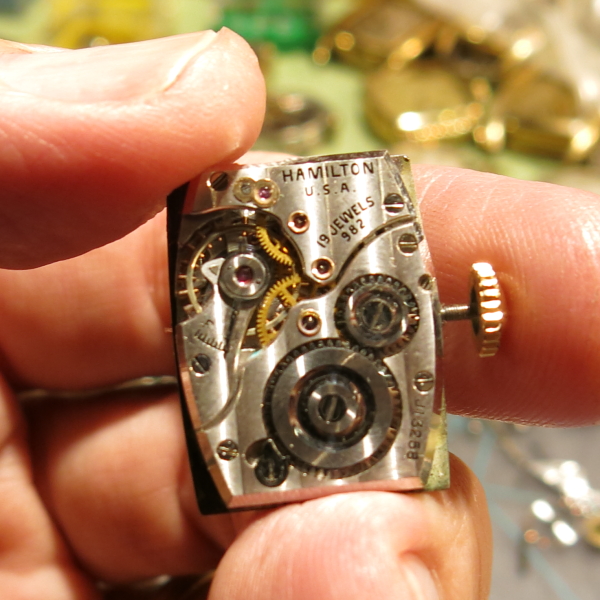 Looking at the dial-side of the main plate, you can see that the set bridge comes in two pieces.  One piece covers the set wheel and minute wheel.  The other is the set lever spring.  By 1937 this part will be changed to a single set bridge .  Eventually the cap jewel for the balance will be changed to a two-screw version.  So overall, there's quite a variety of 980 and 982s out there. 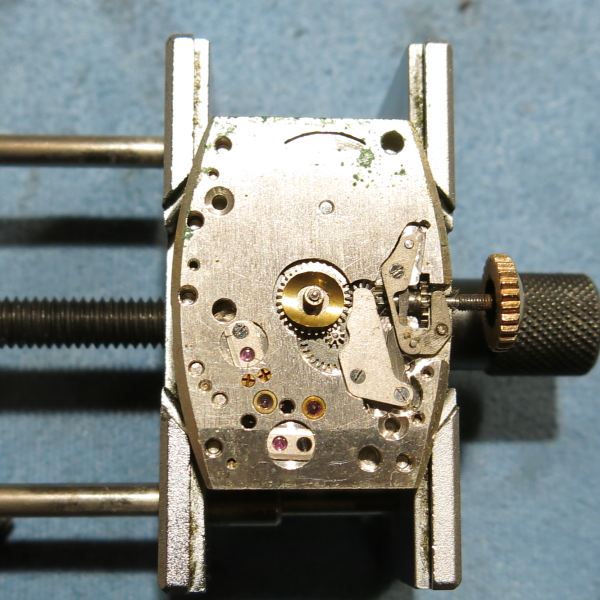 As a general rule, authentic Hamilton models will always say "Hamilton Watch Co. Lancaster PA" inside the case back.  It's a great way to confirm a model is legitimate.  However, there are exceptions to every rule and one of them is some watches from mid-1930's just have the case maker's name, the case material and the case serial number.

The case serial number doesn't really matter, except in very few situations.  Cases were ordered in batches.  Hamilton ordered cases from the same case makers that other watch manufactures used.  So you never know what the story is with case numbers... for example, this case serial number is 51685, the next number (51686) could be for another Custer or it could be the start of another batch of cases for another model or for an entirely different watch company. 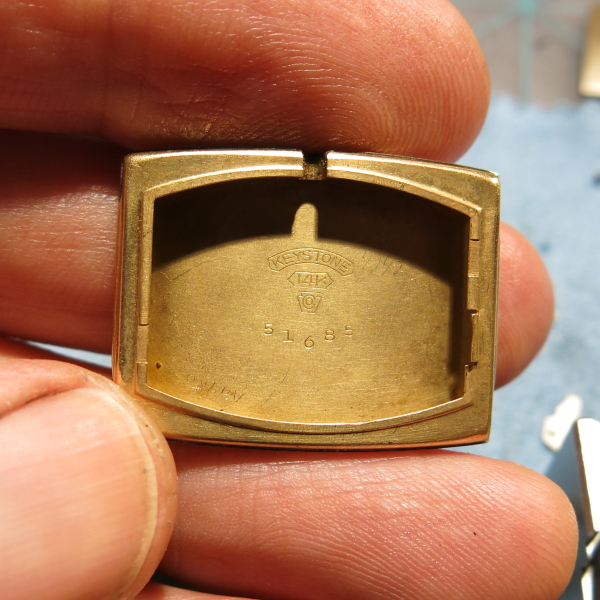 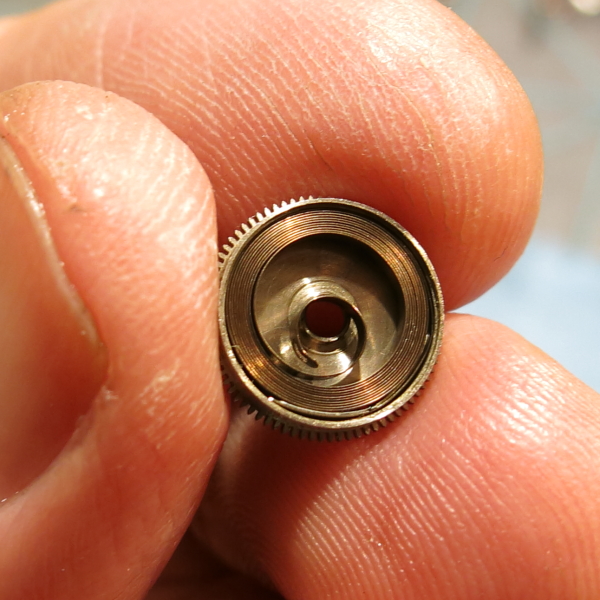 Yup - this mainspring has lost a lot of it's overall power reserve.  The watch would probably run for 24 hours or less with this spring installed.  A fresh spring will power the watch for 36 or more hours. 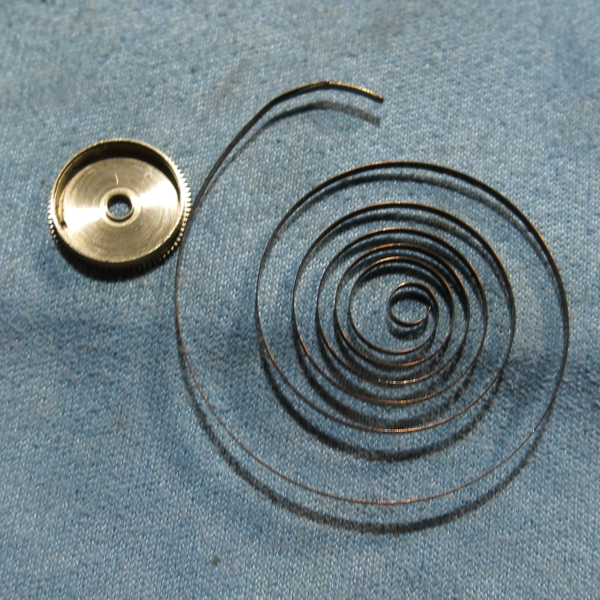 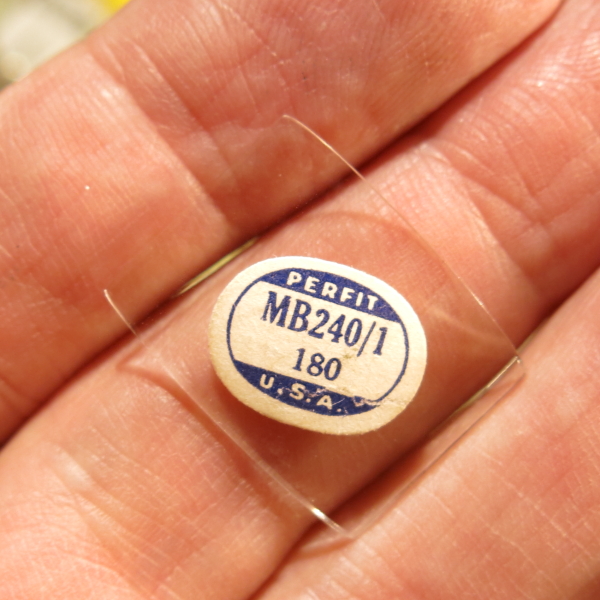 My typical photo with all the parts laid out was too out of focus to post.  However the movement went back together nicely and as you can see below, there's nothing to complain about with this watch's performance. 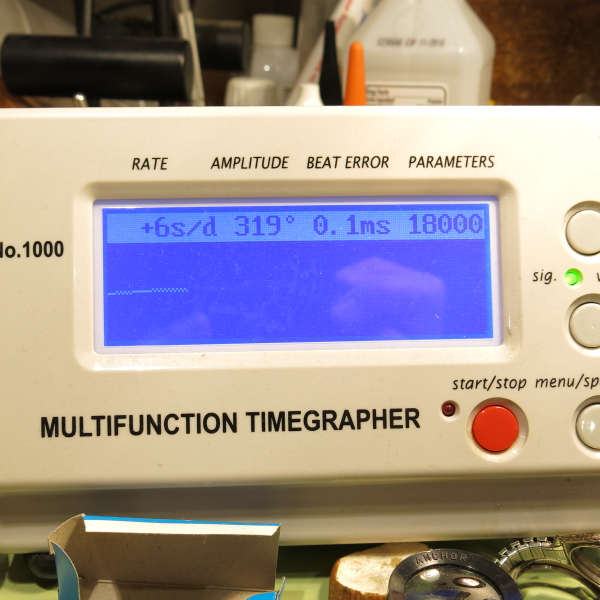 With the watch completely reassembled, including a vintage Gemex pigskin strap and a new crown, you can see the watch turned out very well.  The dial isn't too bad.  I was able to remove the green funk but you can see the area where the finish was compromised. 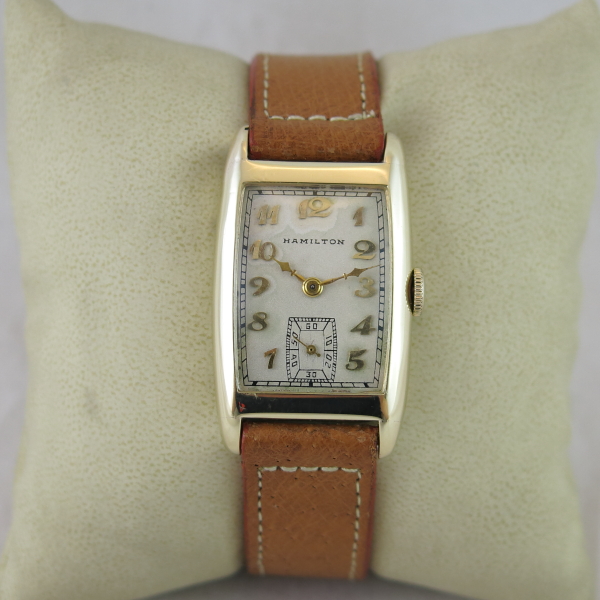 Even though this watch looks pretty good, it will look even better with the dial refinished.  This will look like a brand new Custer when I get the dial redone.  Stay tuned for an update.

I finally got my Custer dial back from the refinisher.  The dial is back to its original specs with a silver butler finish. 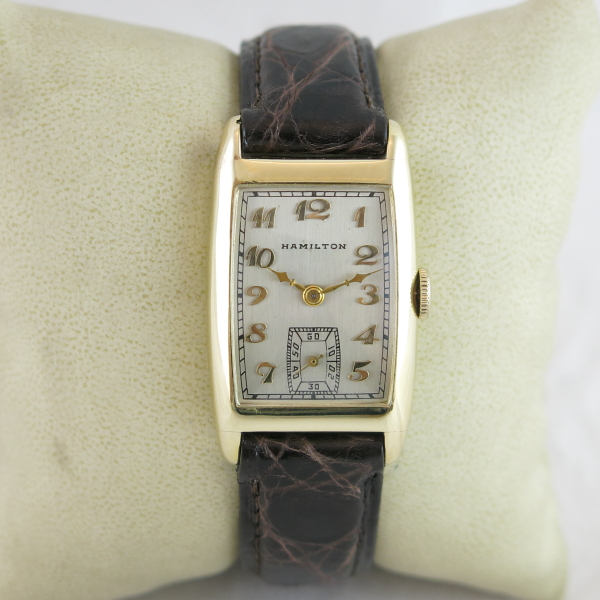