Hamilton's modern line of watches occasionally echo vintage models.  For example, there's a modern Hamilton model called the Gramercy.  The original Gramercy was released in 1958.  It was produced through 1961.  Originally you could purchase it on a strap or a special bracelet. 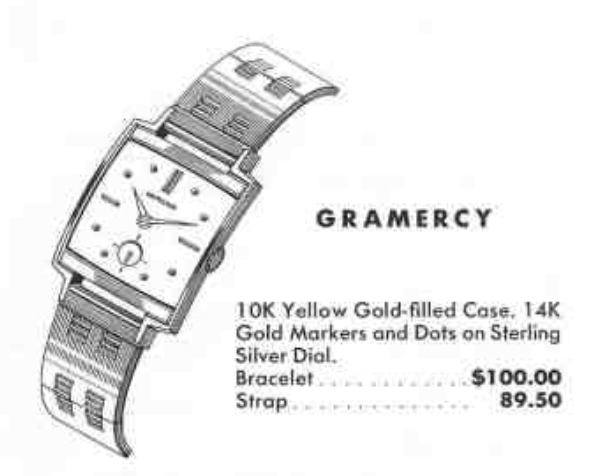 In 1959, the bracelet design was changed to a simpler pattern that was used through 1961. 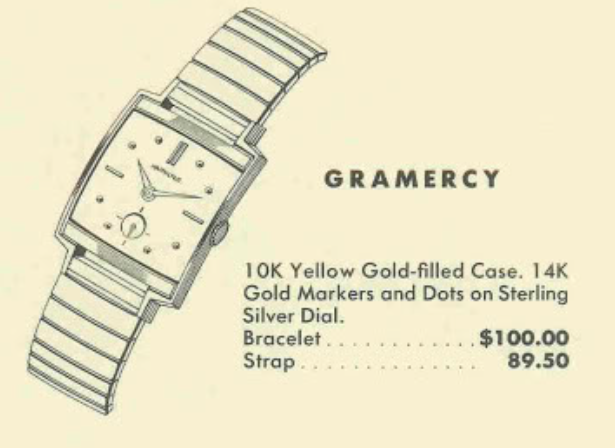 The Gramercy came in a 10K yellow gold filled case.  It's a higher end model and features a sterling silver dial with solid 14K markers and dots.  Beneath the dial is the 22 jewel 12/0 sized 770 movement.

You don't often see the Gramercy for sale... or at least I don't.  It's very similar to the 1962 Gary, which you see all the time, but as a higher-end watch, the Gramercy originally cost twice as much as the later Gary and I suspect they didn't sell quite as many

I recently landed a Gramercy project watch and I was happy to get it because the case appears to be in nice shape.  When I have seen Gramercys for sale in the past, the corners of the bezel are usually heavily worn.   If you have an eye for detail, you probable noticed that the watch is missing the second hand.  You never know if that means the 4th wheel is missing it's pivot or if the second hand was simply lost. 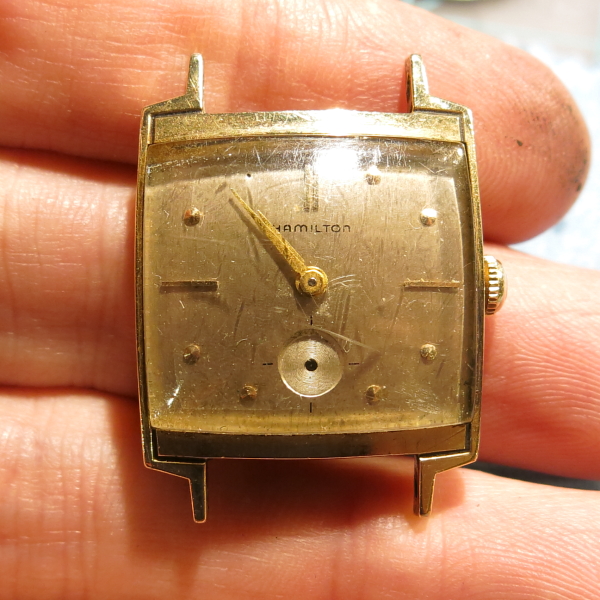 If you have a really good eye for detail you might also notice the dot marker is missing from the 11 position.  I didn't notice that when I purchased the watch.  The dial is also scratched in the center - it's hard to tell if that's on the dial or crystal though.

As a higher-end model, the Gramercy has a sturdy gold filled case back.  This project watch's case back is also in nice shape.  A little polishing will yield a big improvement. 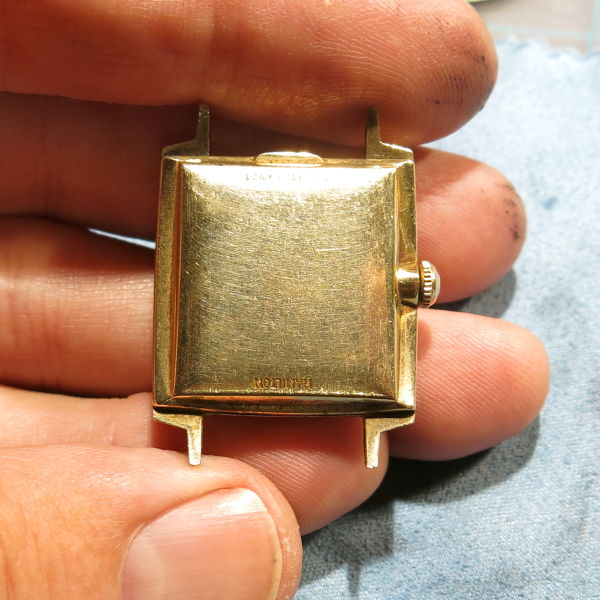 With the crystal out of the way you get a better look at the dial.  It's very splotchy and a good candidate for being refinished since it's a basic silver butler finish with a very simple printing pattern.  This dial can be redone to look like new. 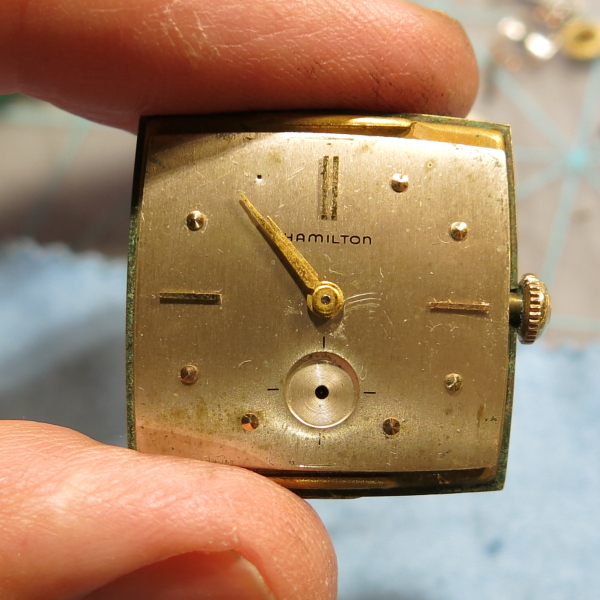 The 770 appears to be unremarkable but it's definitely long overdue for a cleaning. 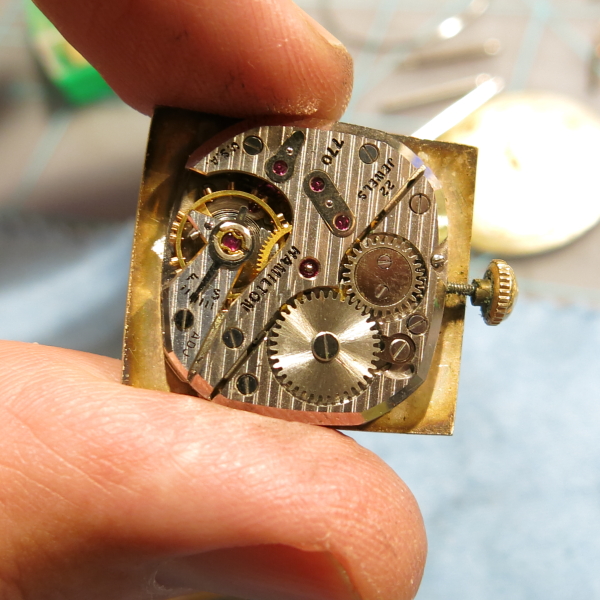 I'll prep a new glass crystal for the case while everything is in the ultrasonic. 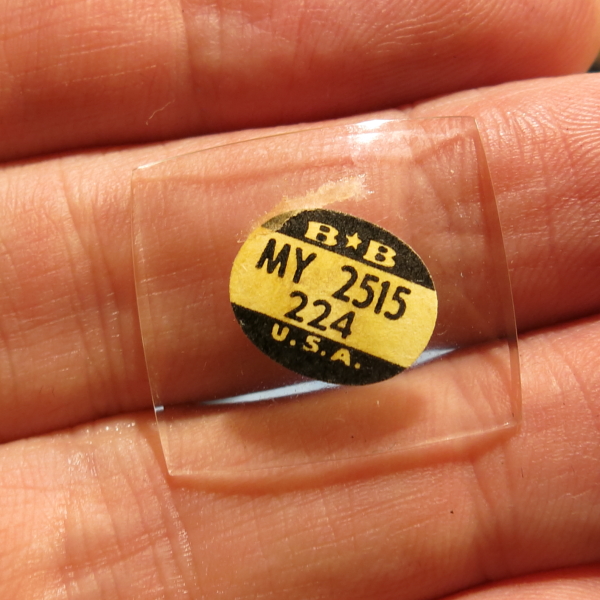 After about 7 years of restoring Hamiltons I have acquired a modest stash of spare dials... mostly from donor movements or failed projects.  Dials are typically sterling silver with solid 18 or 14K gold markers - so I could scrap them but I have found that they come in handy for supplying missing markers on other dials.  For example, I can steal a round dot from a 1951 Carlton dial.  It's already missing the 1 from the 12 so I don't feel bad stealing a dot too.  I can just push the dot off from behind and then press it onto the Gramercy dial... nothing to it. 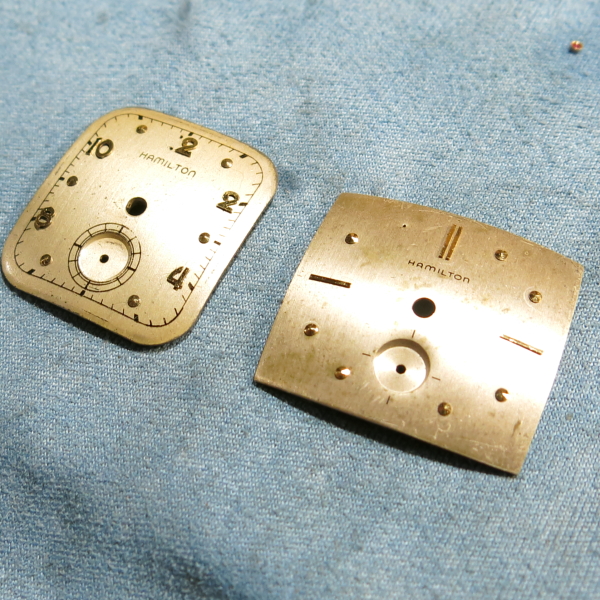 All the parts are laid out after being cleaned and dried.  The 770 is a very well designed movement and it typically goes together with ease. 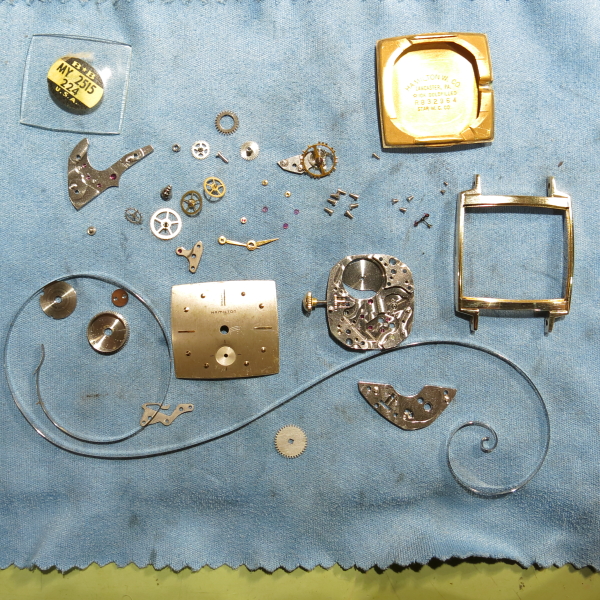 The watch movement is now ticking away with good motion. 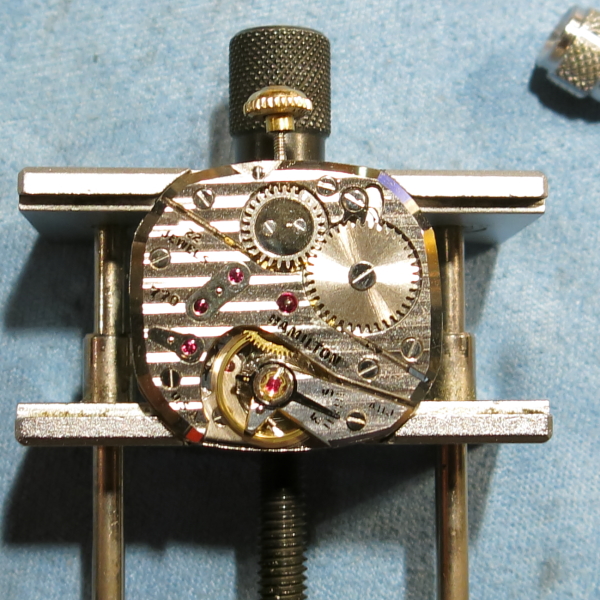 The amplitude is on the lower side of acceptable... I like to see over 250 degrees but I usually don't worry unless it's under 200.  The movement isn't fully wound yet, so it will increase when I wind it all the way.  The beat error of 4.0ms is on the higher side though.  I prefer to see it under 3.0 and ideally as close to zero as practical... I say practical because it can be very challenging to adjust.  I know I can do better than 4.0 though but I'll have to remove the balance assembly from the balance cock to adjust it. 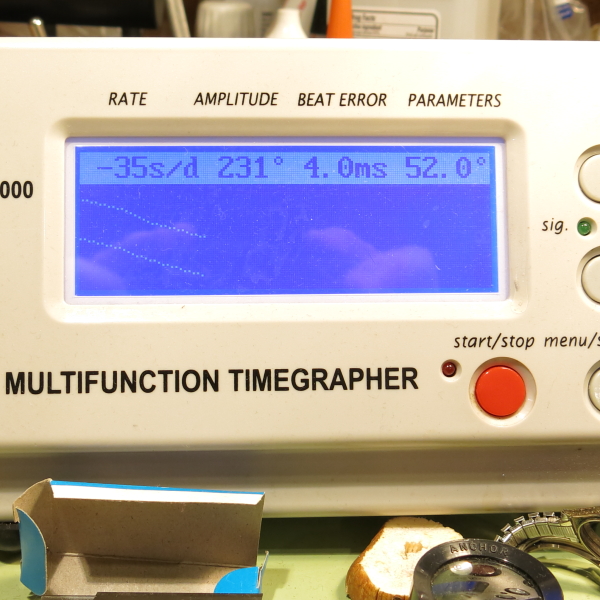 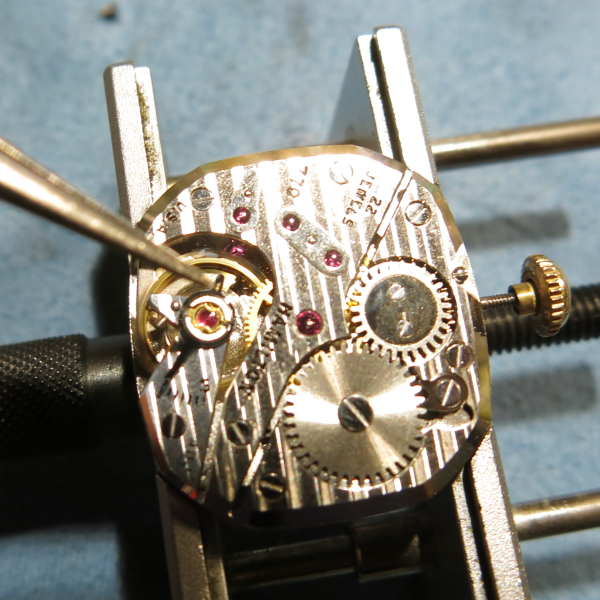 Here you can see the pink impulse jewel is just to the right of the regulator pins.  Since the hair spring stud is fixed, I have to rotate the hairspring collet on the balance staff in order to change the relative position of the impulse jewel.  If you think it's tricky to understand in words, it's even more tricky to do without goofing up the hairspring in the process. 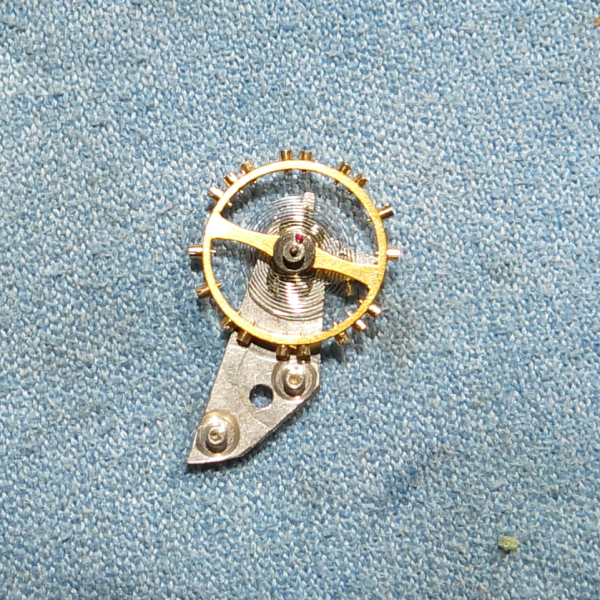 Well, I improved it by 25%.  It's very tempting to leave it at 3.0ms and I bet a lot of watchmakers would call it a day at this point.  However, I think I can do better so I'm going to roll the dice again and see what happens. 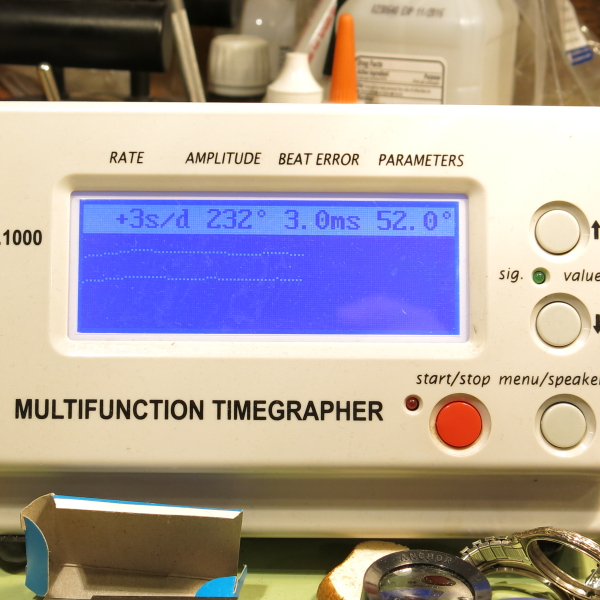 Alright - there's nothing to complain about here. 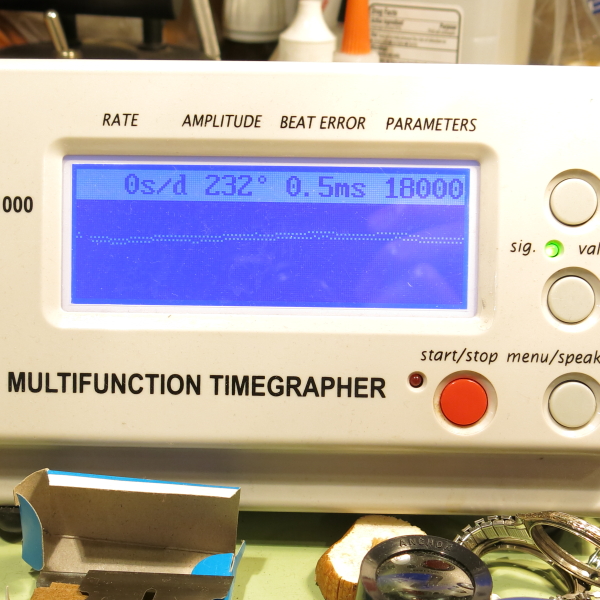 Putting the dial and hands back on are a snap compared with adjusting the beat error.  Installing a fresh genuine lizard strap isn't very hard either.  Unfortunately my camera and light tent are merciless and make the watch look more splotchy than it really is.  Or should I say, more flattering light makes it look less splotchy.  In the end, I think the case is so nice that this watch deserves to have the dial look it's absolute best.  So stay tuned for an update to this post to see what the final finished project looks like. 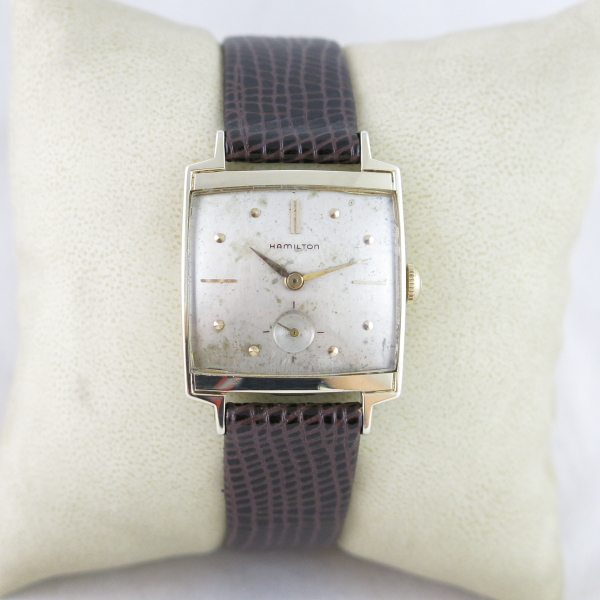 Such a nice looking case deserves a nice looking dial and I think this example looks fantastic with a refinished dial.  It looks like it's a brand new watch. 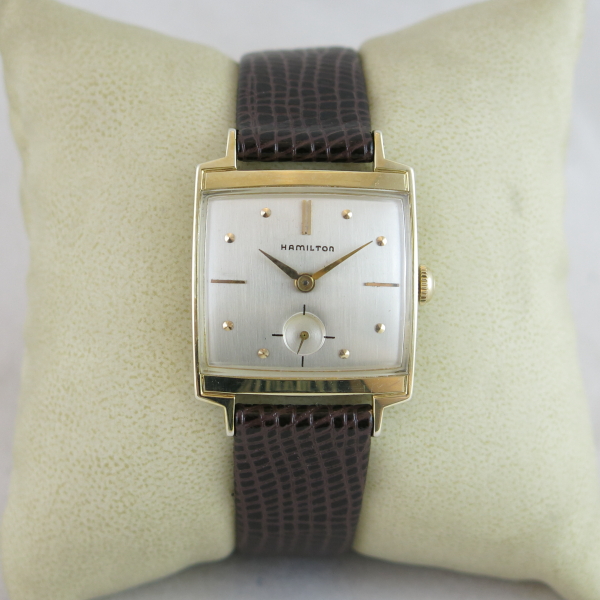 SaveSave
Posted by HandyDan at 12:38 PM