If you've followed my blog you might recall how I occasionally come by mysterious models that don't show up in the catalogs.

It's not unusual to find a Hamilton movement and dial recased in a jeweler's case.  These watches are often referred to as "frankens", as in Frankenstein, since they can be assemblies of various incorrect parts.  It's significant to realize that very often a watch's case would wear out long before the movement did.  Jewelers could make more money by recasing a movement and giving an old watch new life, and they often embellished them with diamonds and other bling.  Jeweler-specials are somewhere between a complete franken and authentic models, but way closer to the franken-side of the continuum.  Their value is in the movement and whatever scrap value the case offers.

In February of this year I came across an uncatalogued model that I called a K-200-something because the case was solid 14K gold and properly marked as a Hamilton model.  Then, shortly thereafter I came across another!  So it's definitely a legitimate and unidentified model.

What made that model interesting is the dial looked like is was for the K-100, the only solid 18K gold model in the K-series.  (There is a K-150 with stainless steel back but only the K-100 is solid 18K front & back). 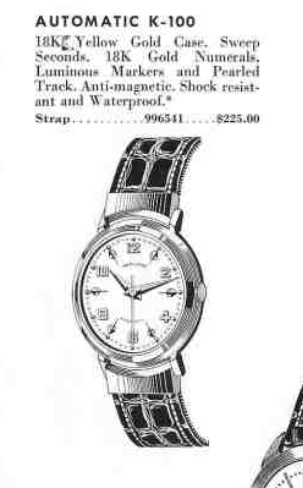 The K-100 is an interesting model in numerous ways, beyond just being solid 18K gold.  It has flexible lugs that are attached to the case in a manner that makes the strap look like it has gold tips.  It has solid 18K numerals and markers on the dial, along with a pearled minute track.  It's a very sharp-looking watch - which you'd expect from the flagship of the Automatic K-series lineup.

Tucked inside you'll find the 17 jewel 661 movement, the typical grade for the majority of the K-models.

A friend of mine recently landed a K-100 and shortly thereafter found a franken with a nicer dial and a 667 movement.  He sent them both to me for a trip to the spa and to get the original K-100 squared away.

As received, the watch looked great on the outside.  You can see on the catalog that there are lines on the dial that extend inward from the markers.  You can see them on this dial at the 3, 5, 7 and 9 positions but they're not colored at all.  I've seen this dial a number of times now and none of them have color in those lines but the lines are always visible. 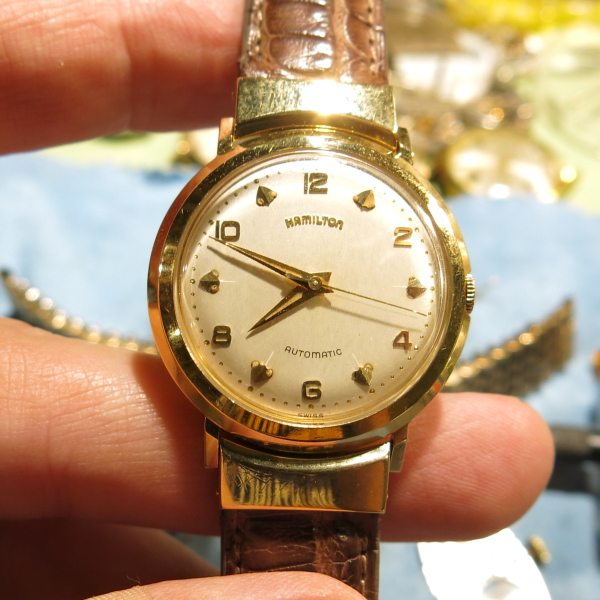 Solid gold cases are always verdigris-free so they have a look that is very easy to spot.  If you see verdigris anywhere, it's not solid gold. 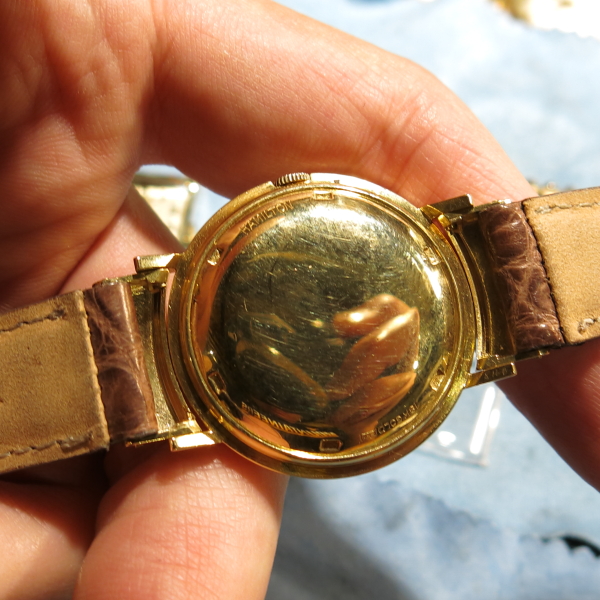 The case back makes it easy to identify the model... it say K-100 right inside. 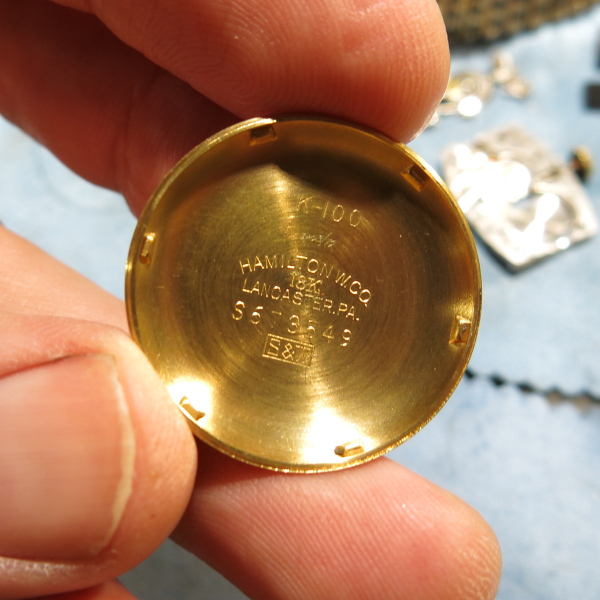 My friend installed the nicer of the two dials in the watch, along with the 667 that it came with.  The 667 replaced the 661 early in the 1960's.  The contour of the rotor is about the only difference that I've been able to identify between the two grades. 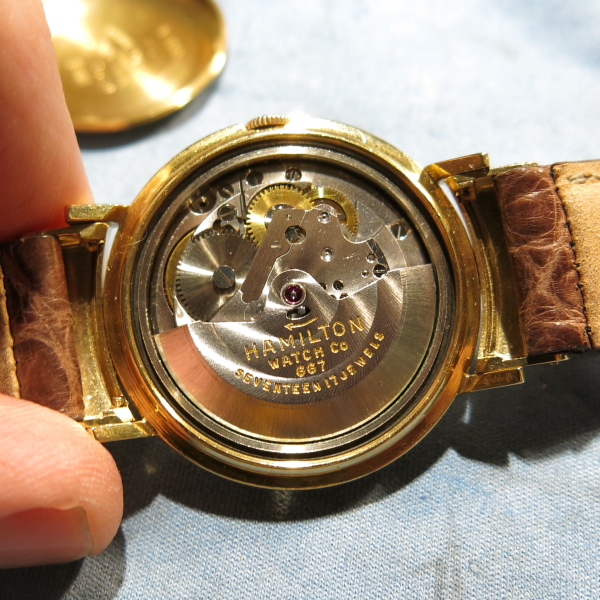 The dial and movement that came with the 661 originally looks to be in very nice shape too.  Notice the white lines extending inward from the hour markers... strange, huh? 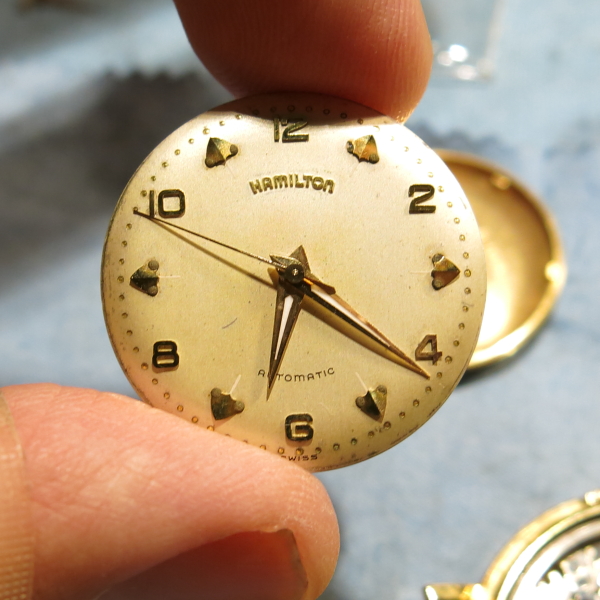 The 661 looks like the 667 but you can see the outside of the rotor is a different shape than the 667.  This movement isn't running but as soon as I took the hands off, it started right up. 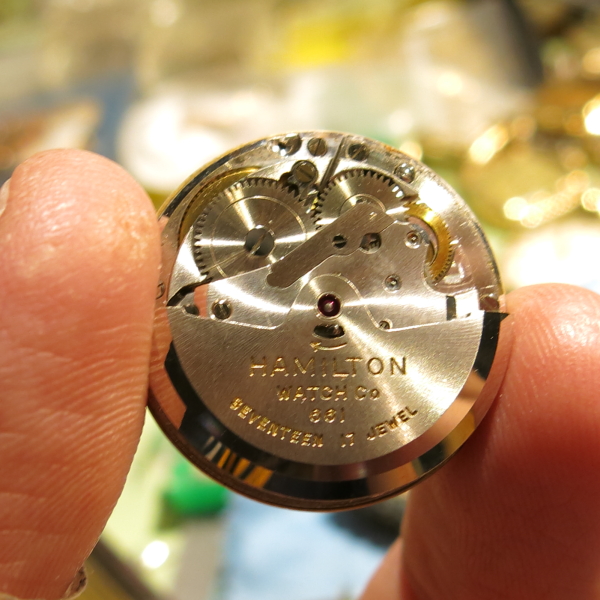 Oddly enough, this movement is missing it's clutch wheel and the winding pinion.  So this watch will wind itself but you can't set the time or winding it manually.  I have a parts movement so I can donate the missing parts.  I could have taken them from the 667 too, but then that movement would be out of commission. 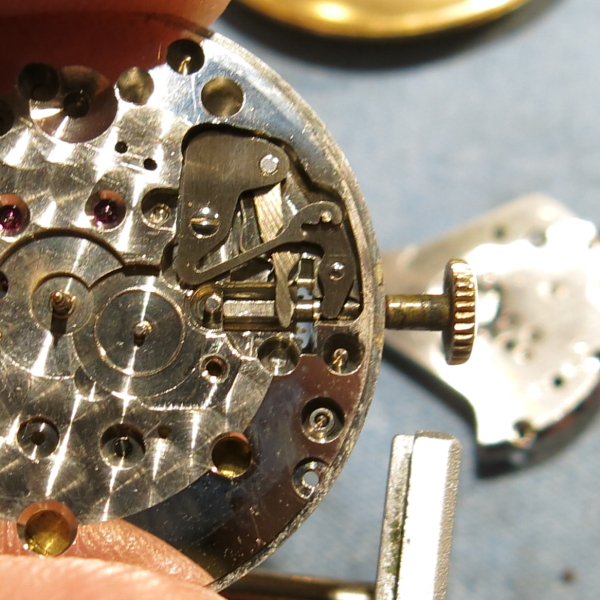 The clutch wheel (left) and the winding pinion will be installed after the movement is cleaned and reassembled. 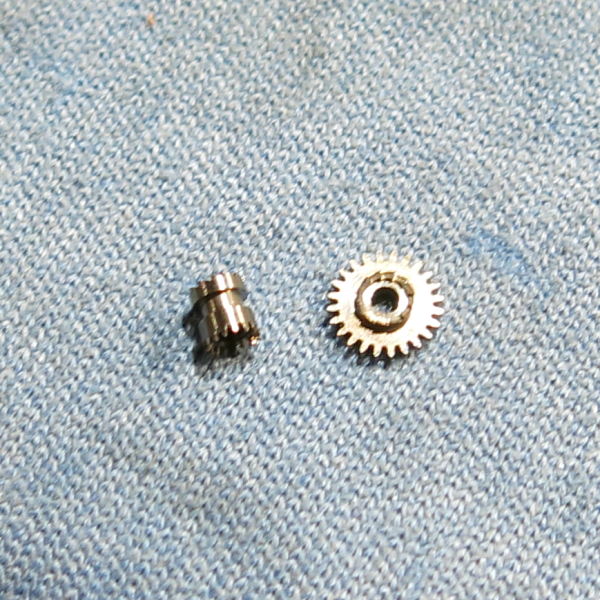 Which dial to use... it's nice to have a tough decision.  I'll go with the one on the right, its just a smidgen nicer. 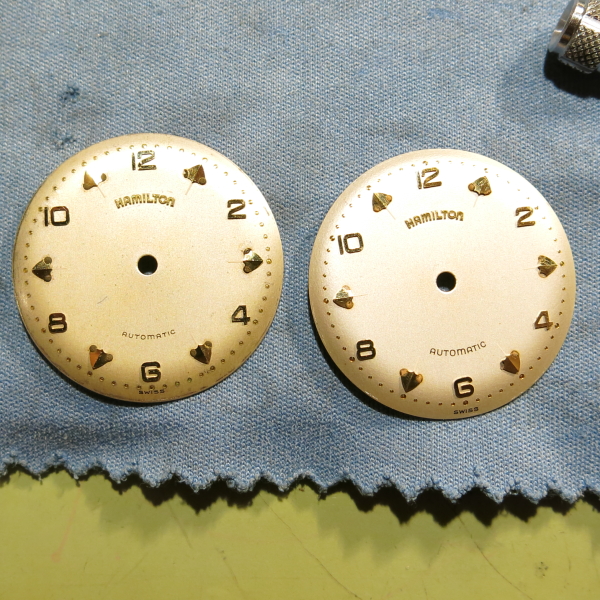 Everything is cleaned and dried.  Time for reassembly with fresh lubricants. 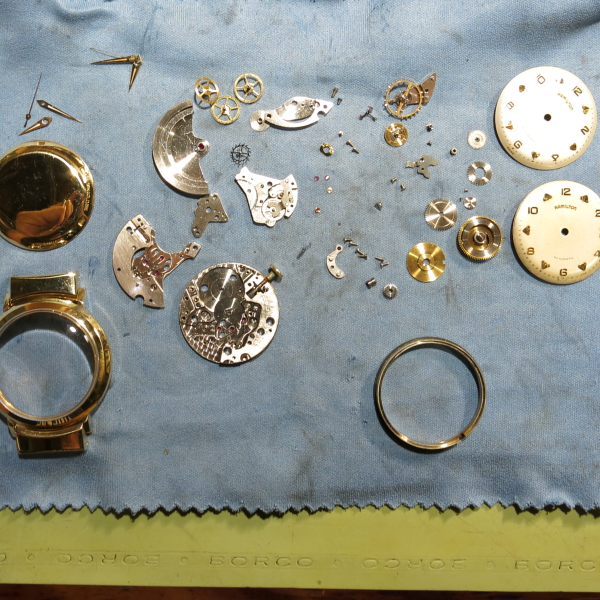 The movement is now running but I still have to put the jewels back into the balance cock. 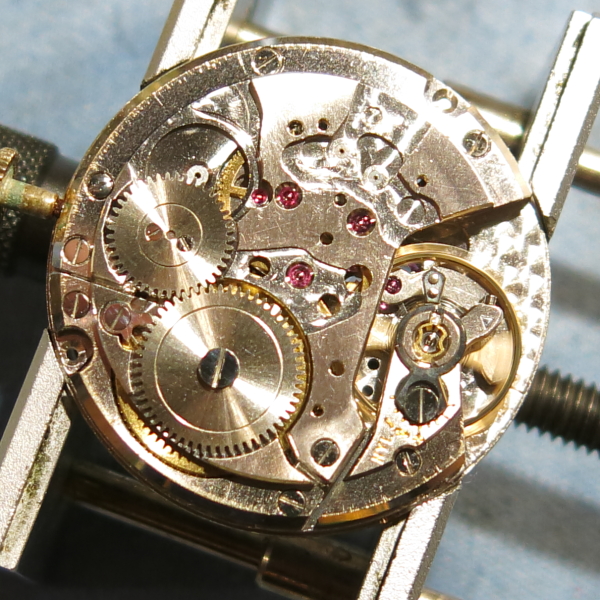 Reinstalling these two little jewels can be nerve wracking... one flick and they will disappear, never to be seen again. 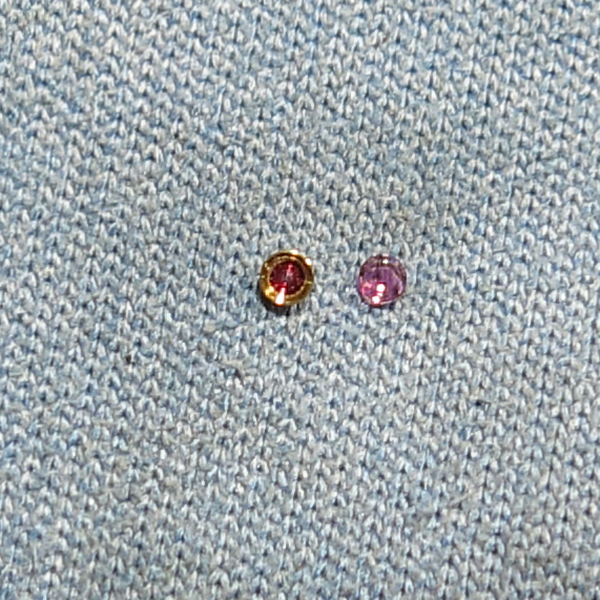 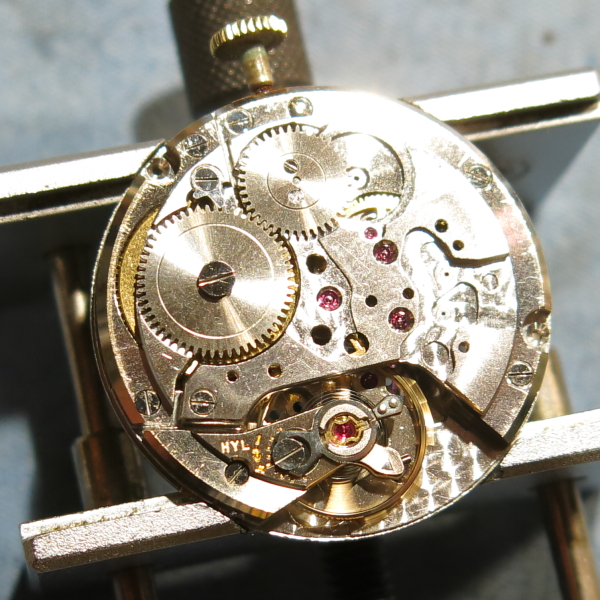 The watch is running a little fast but I'll leave it like this for a while.  It should slow down a little after an hour or two. 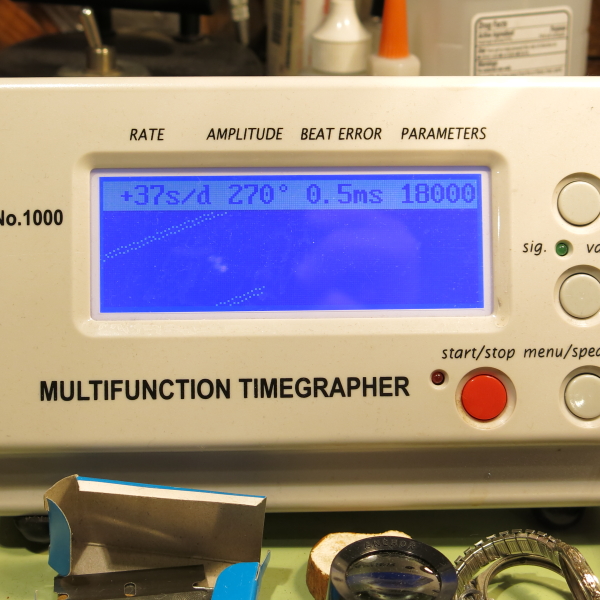 The clutch and winding pinion are installed.  Now for the cannon pinion, minute wheel, setting wheel and hour wheel - then the dial can go back on. 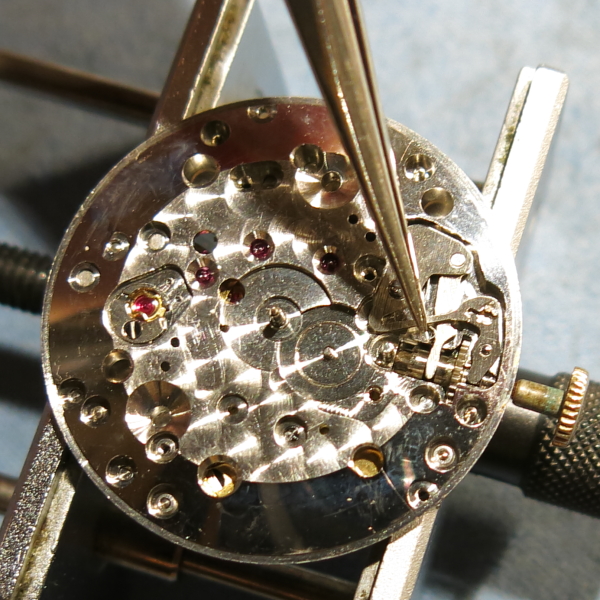 With everything back to ship-shape and a correct 661 under the hood, this watch is ready to be sealed back up. 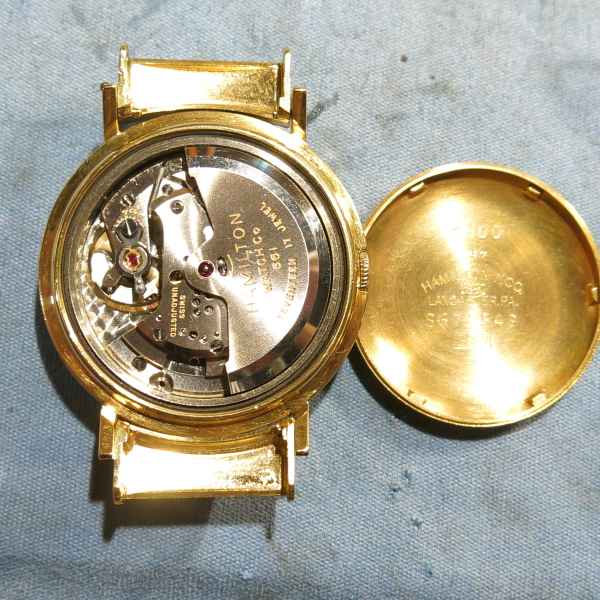 A light polish is all that's needed to get the outside of the watch to look as good as the inside.  The K-100 is a wonderful model and would be a centerpiece for anyone's collection.  Too bad I have to send this one back! 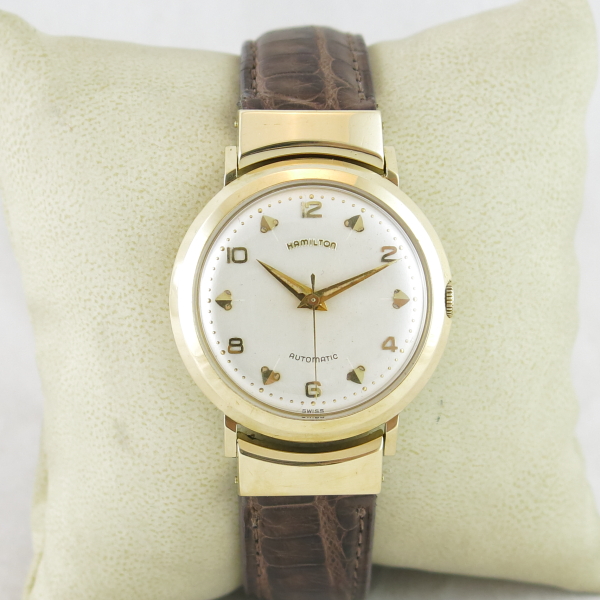