I learned something new this week.  I bought what I thought was one model and it turns out it's another model that is virtually identical to the one I thought it was.  Sound confusing?  It was. 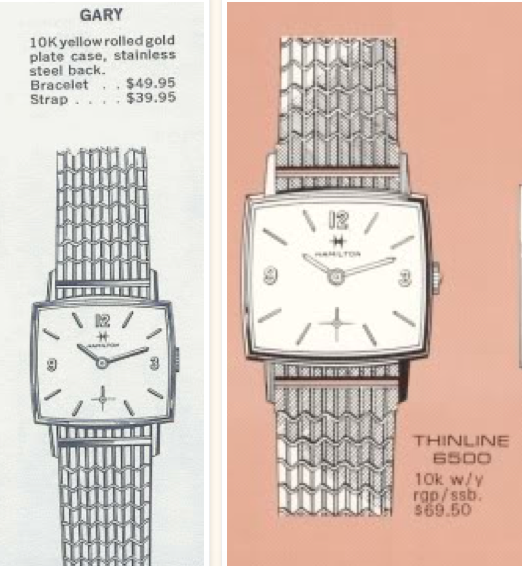 Both models were made in yellow rolled gold plate cases as well as white rolled gold plate cases.  Both cases have stainless steel backs. The only thing that really seems to differentiate the models is the fine details of the bracelet - and I mean really fine details - as you can see the two catalog images are very close to each other.  The Thinline 6500 adds additional texture to the flat areas of the case and bracelet.  If you had them side by side in person you would also see the hour markers are slightly different and the hands on the Thinline are slightly smaller.  So they are definitely different models.

To confuse things even further, there's also a diamond-dial version in white rolled gold case called the Lord Lancaster A - but at least the diamond dial makes it easy to identify.  It also came on a black suede strap. 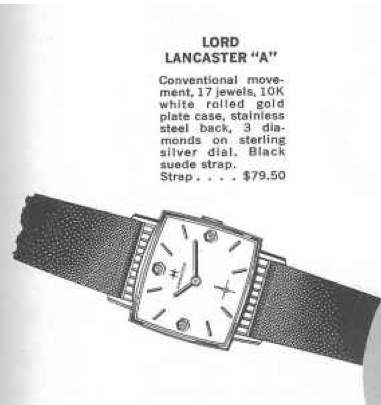 Tucked inside the 1962 Gary is a Hamilton 686 Swiss-made movement.  I suspect (so I could be wrong) that the Thinline 6500 has a similar Hamilton 639 movement.

So as I said at the start, I learned something new this week because I started off by buying what I thought was a Thinline 6500.  It was a grungy-looking watch and missing it's crown.  The crystal was a bit beat up too.  A little TLC would go a long way toward improving this watch. 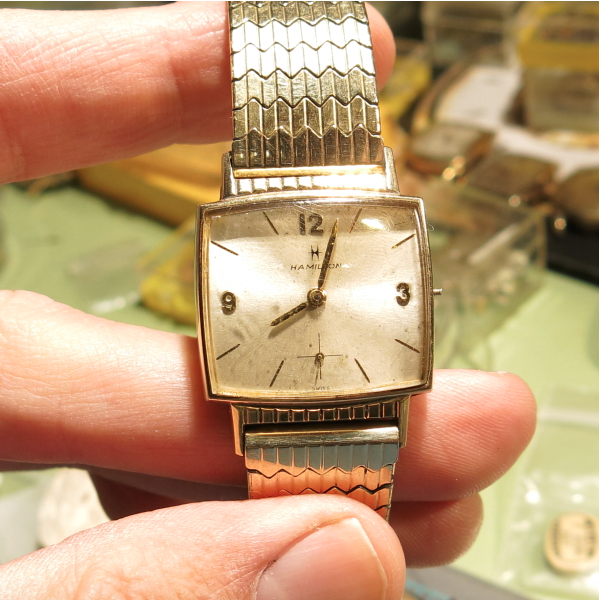 The 17 jewel 686 movement is based on the A. Schild (AS) 1200 - which you can still buy new today.  It was a little dirty but otherwise in fine condition. 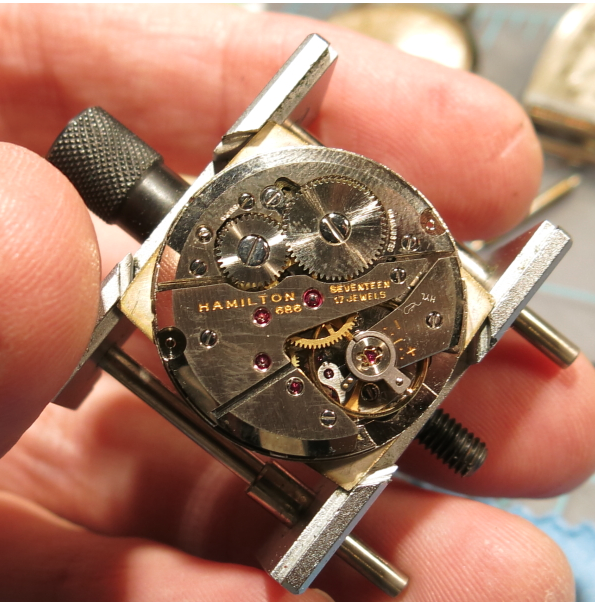 Thinking I had a Thinline 6500, I located the replacement crystal.  So far so good. Then, thanks to the cumulative knowledge of my fellow Hamilton collectors, I learned that the 1962 Gary is pretty darned similar to the Thinline 6500.  In fact, so similar that I had misidentified my project watch.

If you look really closely at the photo below, there's a little groove inside the crystal ledge on the bezel in the center at the top and bottom. 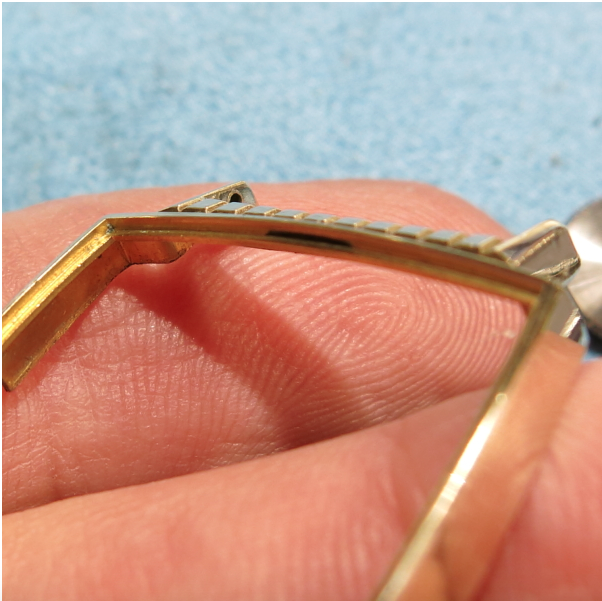 If you compare that to the GS crystal for a Gary (and Lord Lancaster A) it actually comes with a corresponding portion to snap into that ledge. 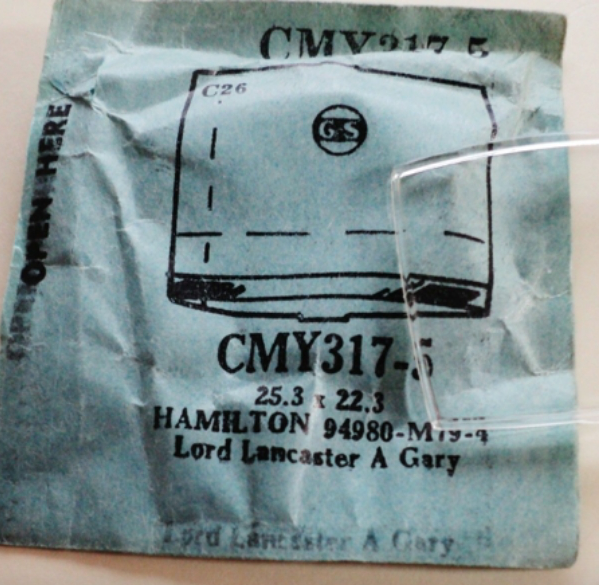 If you look closely at the packaging, the two crystals differ by 1-tenth of a millimeter in dimensions.  My Thinline 6500 crystal fit the Gary bezel with no problems at all.

Well, everything gets disassembled and thoroughly cleaned.  Once it's all dry it goes back together with lubrication in all the critical areas. 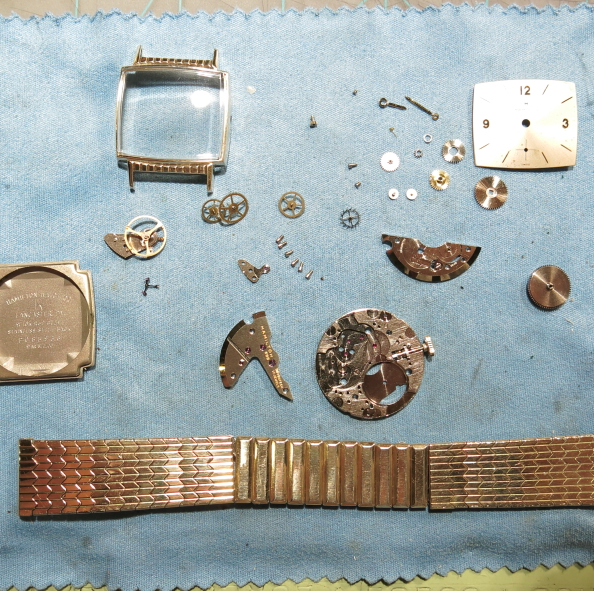 One the timer, the now-running movement is keeping decent time, but notice the "beat error" of 7.5ms. Beat error is basically how far the balance swings to one side versus the other.  The two lines you see on the left of the screen below represent the "tick and the tock" of the balance swinging and the gap between them is the beat error.  Ideally you want the two lines to be horizontal and close together.

You can see below the two lines are separated and trending upward slightly - that means it's running slightly fast (18 seconds per day) and has a beat error of 7.5.  The 256 is the degrees of amplitude the balance swings - over 200 is a good goal.  The 18,000 is the "beat rate" and represents 18,000 beats in one hour.  Each tick is a beat - so if you've ever counted "one mississippi, two mississippi"- you've counted with a 5 beat per second rate, which is the same as 18,000 beats per hour. 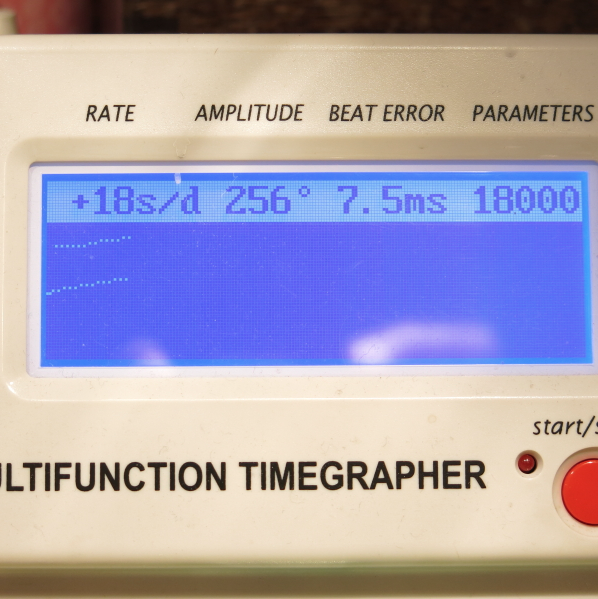 By now you're probably thinking… "That's pretty cool, I didn't know that.  But why do I care about the beat error?"

Good question.  Obviously if it's too high the watch won't run well.  However, the main reason (in my opinion) is a watch with too high a beat error will stop sooner than a watch with a low beat error.  A high beat error means the balance's impulse jewel isn't centered in the pallet fork so at rest, the balance wants to rest off to one side or the other.  Since the pallet fork is what delivers the energy to the impulse jewel, it needs to supply more energy to get the balance to swing to the side that is off center.  Ideally the pallet fork would supply the same energy to both sides - which would allow the watch to run until all of the energy is expended.

I'm willing to bet that I've lost you at this point - so watch this video and you'll catch up with me.


How a Watch Works Video

Too further explain adjusting for beat error, I'll use you as the balance wheel.  Let's pretend your right hand is the impulse jewel and your left hand is the hairspring stud.  Put your right arm straight out to the right and your left arm straight out to the left.  You should look like a traffic cop stopping traffic in both directions.  Let's say that you are now in "equilibrium" and comfortable at rest in this position.

Now, let's say the center of the pallet fork is the computer screen you're looking at.  Is your right hand pointing to the computer screen?  No, probably not - it's likely pointing off to the right somewhere.  That means that you've got a large beat error.

To adjust it, you need to move your right arm (without moving your left arm) to the left so that your hand is pointing to the screen.   Moving your right arm to the left would be moving against the hairspring… it would want you to get back to equilibrium.  Since your left arm is fixed to the left, you'd need to adjust the other end of the hairspring, called the "collet", where it attaches to the balance staff, so that at equilibrium, your right hand is pointing to the screen and your left arm is straight off to the left.  That's adjusting for the beat error on most Hamilton movements. 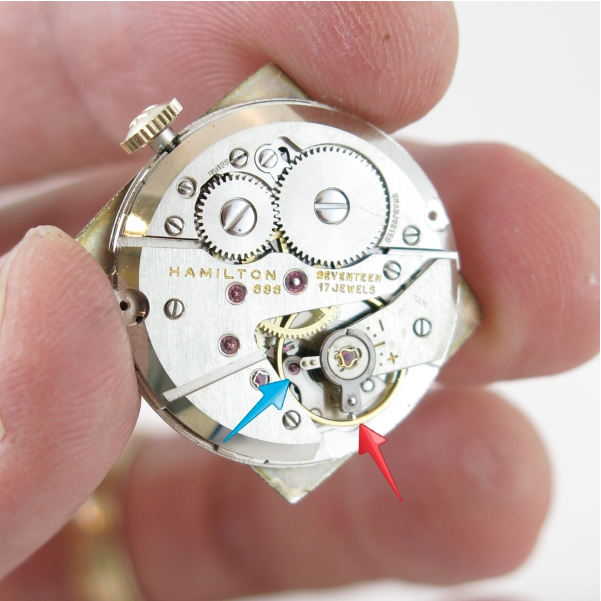 In this shot, I've adjusted it to 0.3ms…  I'd be happy with that on any other watch. 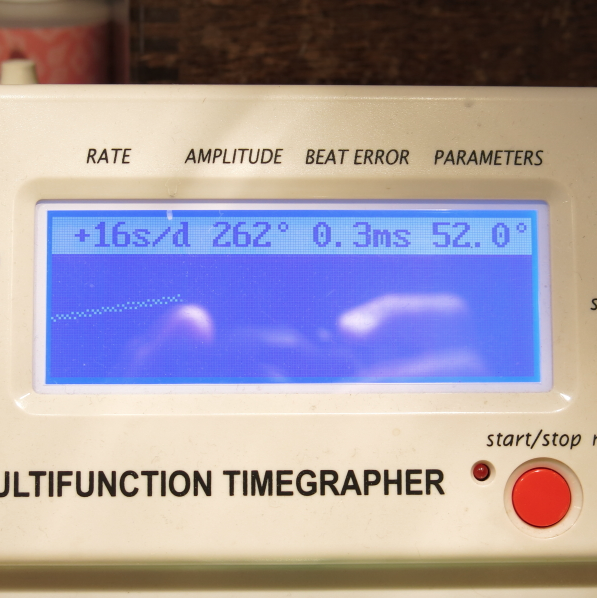 But a little more tweaking and I can get it down to zero.  It doesn't get better than that.  My two lines have converged to a single line and tweaking the regulator slows it to 9 seconds fast per day.  I like to leave watches running a little fast as they will slow slightly as the mainspring lets out. 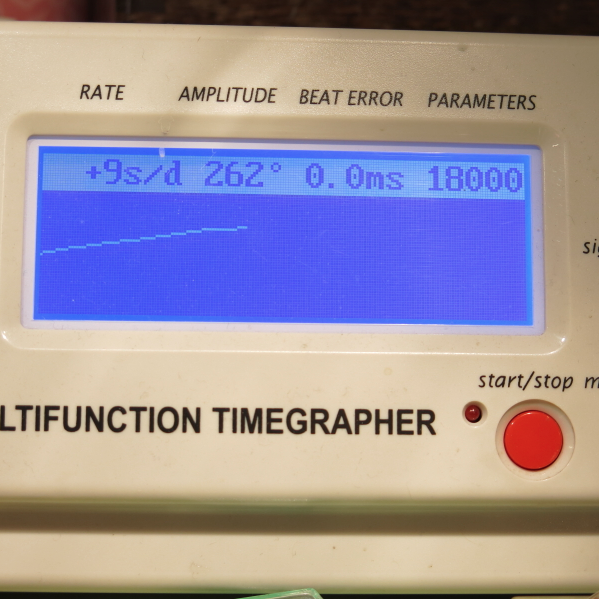 And here's the finished product all cleaned up with a new crystal and Hamilton crown.  The dial shows it's age with a few spots but there's not much to do about that other than getting it redone and it's not that bad. 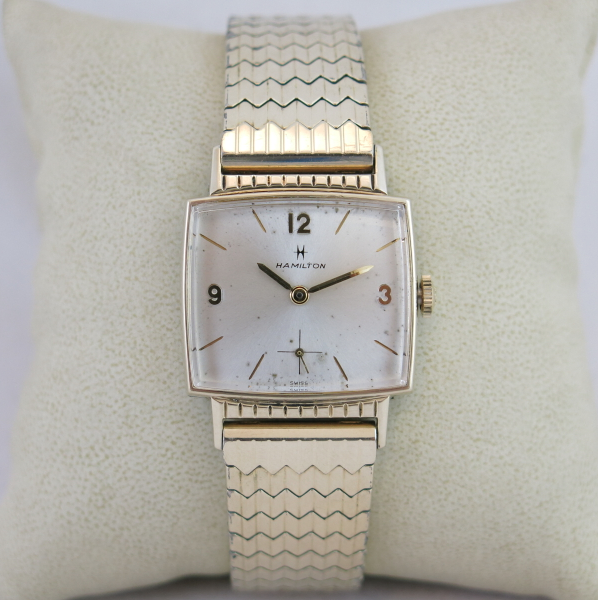 On the wrist with normal lighting, the watch looks much better. 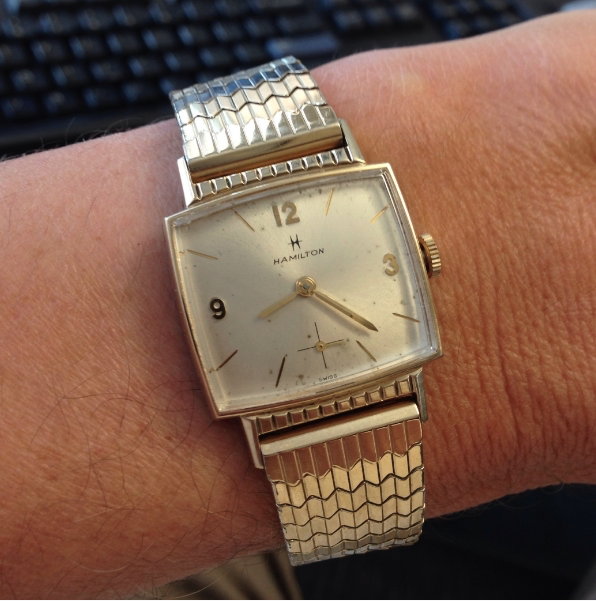