Back in January of this year I posted a watch that was a bit of mystery... was it a 1959 Dexter or a 1960 Romanesque T.  I think it was a Dexter with an odd dial but it wasn't entirely clear.

As fate would have it, I recently landed a Romanesque T.  It's a one-year wonder and was produced only in 1960. 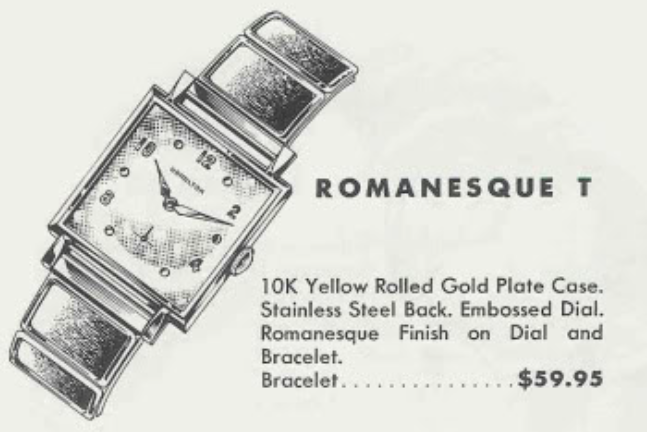 The Romanesque T is one of five men's Romanesque models.  It's a little unique in that the markers and hands are golden colored or gilt, where the other models are black.  Like the other models, the Romanesque T has a unique textured dial that has a golden "romanesque" finish.  It have with a bracelet with a matching finish.  Check out my mystery watch to see what it looks like.

My project watch is in surprisingly good shape.  It doesn't appear to have been worn very much.  The textured dial changes in appearance depending on how the light hits it. 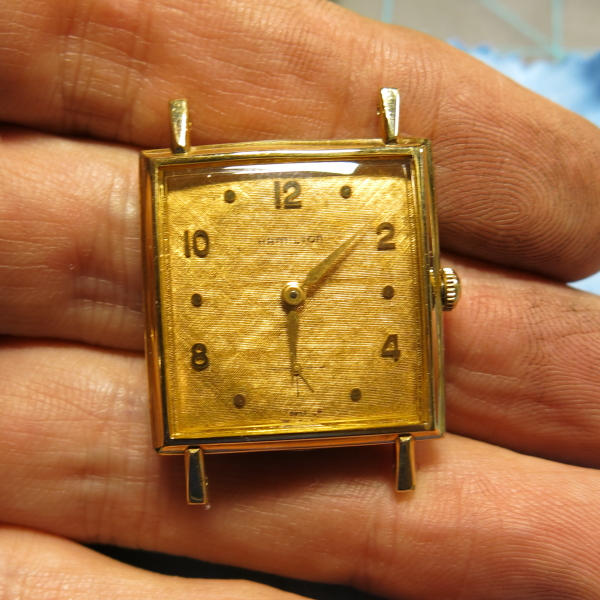 The stainless steel back is bright and shiny. 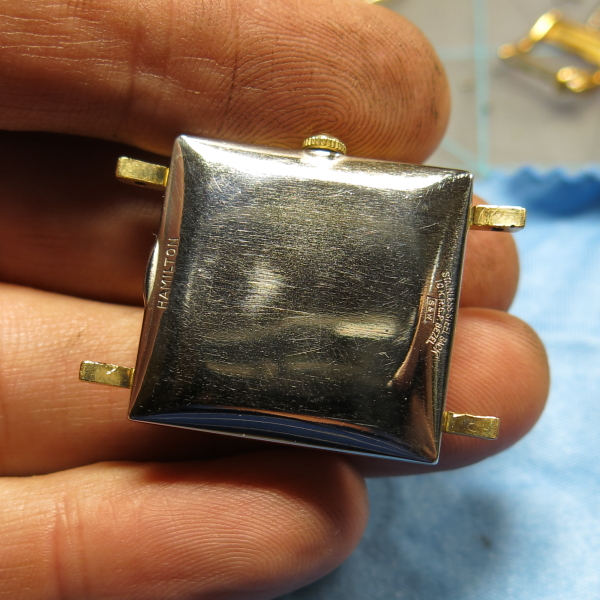 Without the bezel and crystal in the way, you can see the unique parchment-like texture of the dial.  The gold hands are a little hard to see, in my opinion.  I can understand why the other models used black. 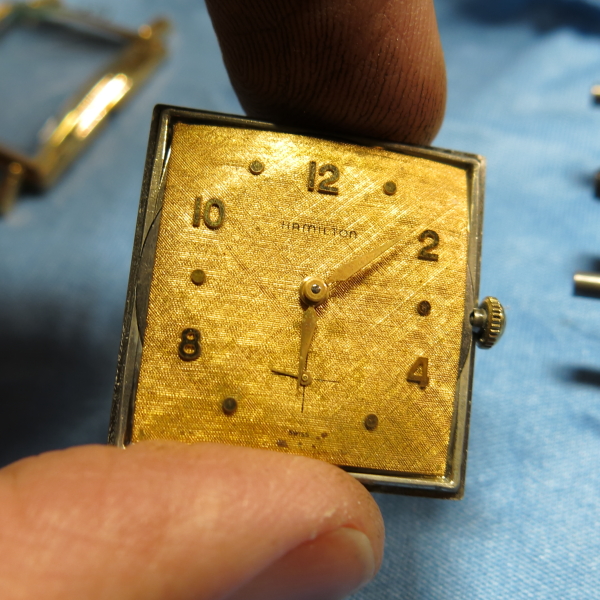 The 673 movement is in great shape.  It doesn't have any tool marks to my eye but it also looks like it hasn't been cleaned in a while. 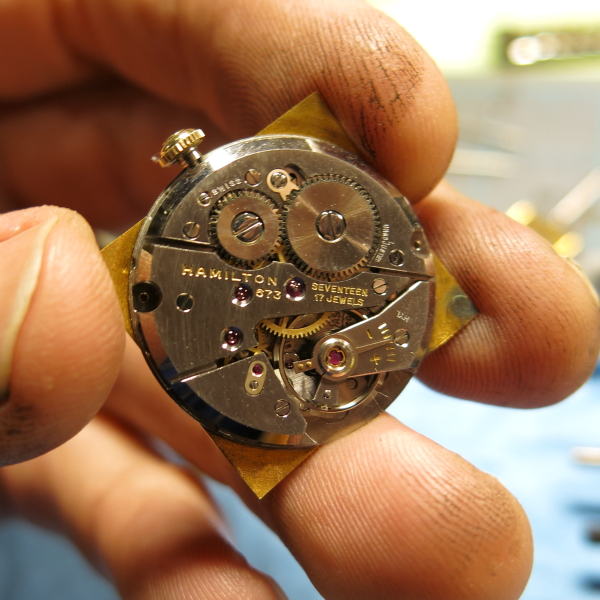 There are no marks whatsoever in the case back.  I wonder if this watch has ever been serviced or if it spent the last 57 years in a drawer somewhere? 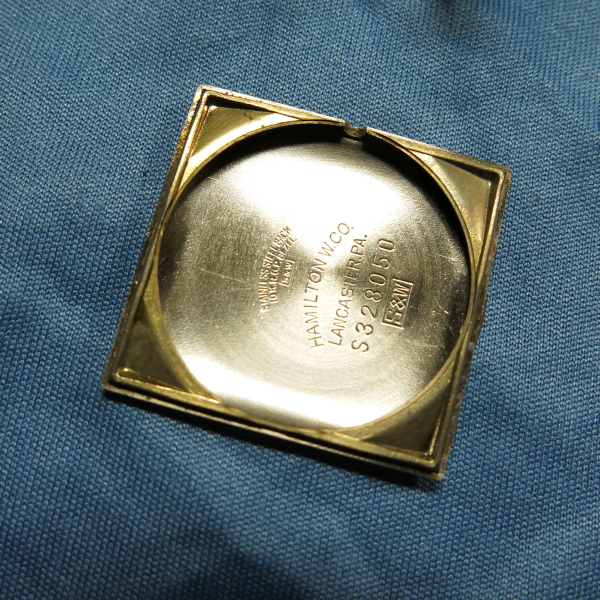 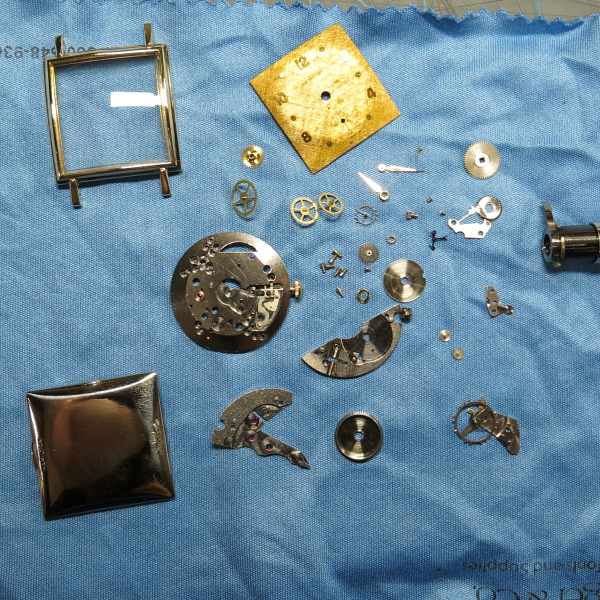 The reassembled movement is ticking away with good motion.  It's off to the timer to see how it's running. 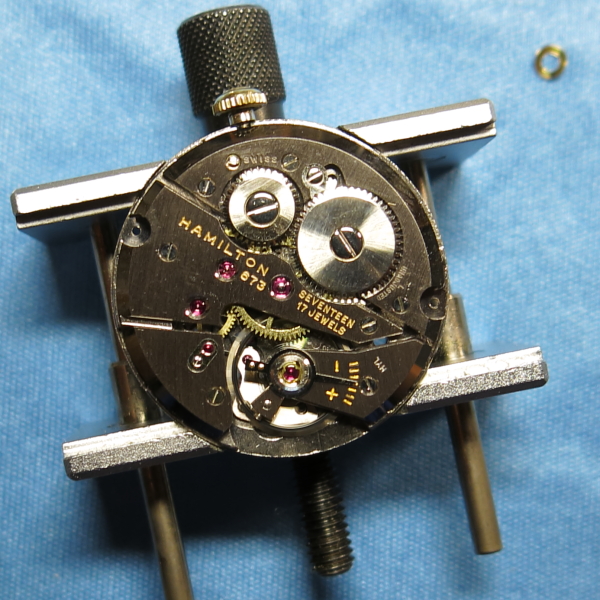 It's running a wee bit fast but that should be easy to slow. 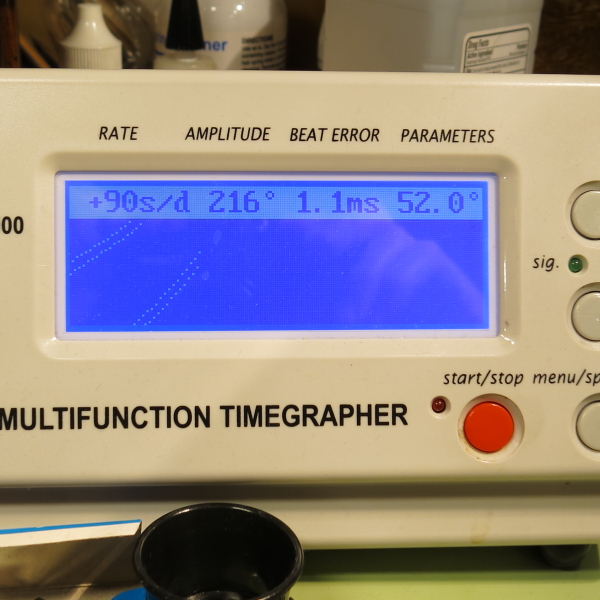 Up, down, up, down, just the slightest tweak to the regulator index adjusts the beat rate.  The amplitude of 216 degrees is on the low side.   When I cleaned the mainspring it looked like it was a little short.  I wonder if it's the correct one or if it's the wrong strength?  I'll let it run for a while and see if it picks up.  Otherwise I may change it out to see if the amplitude goes over 250 degrees. 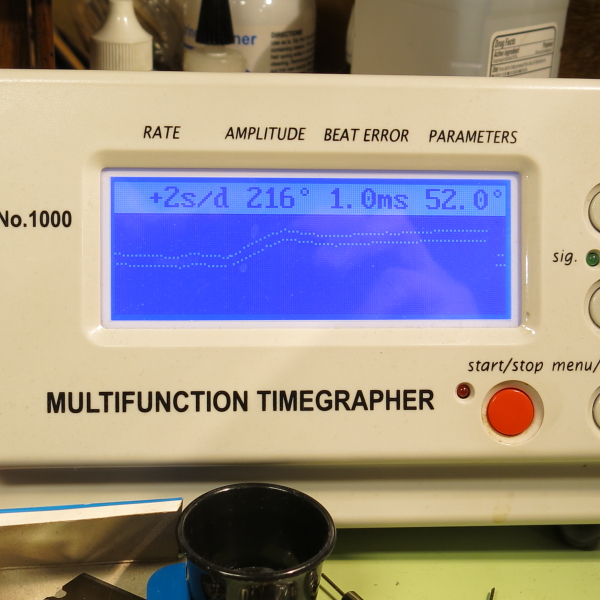 My light tent makes it very hard to photograph the finished project.  It actually looks a lot more sparkly and less splotchy than the camera makes it out to be.  As you can seem the hands seem to blend right in to the dial.  On the wrist it's a lot different and much easier to see the time when he light reflects off the hands and the markers. 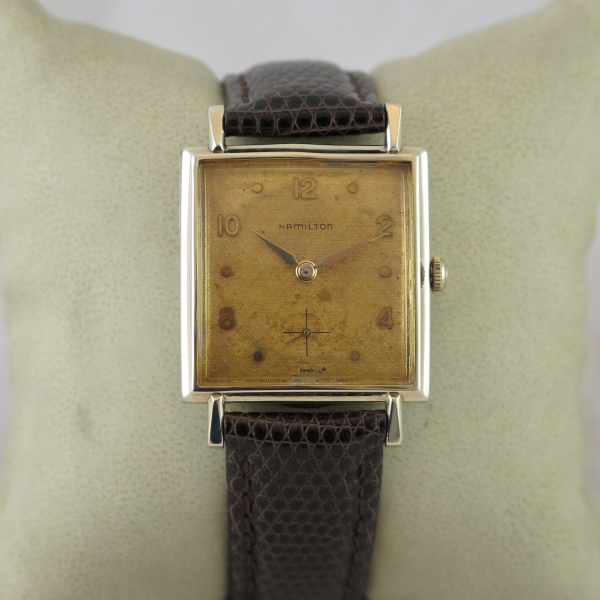 I decided to replace the mainspring and see if the amplitude would increase.

It's also possible that the barrel wasn't tightly closed and dragging a little under the balance bridge.  So first I checked that, but no change in the amplitude.

I checked my stash of mainsprings and I happened to have one for a 673. 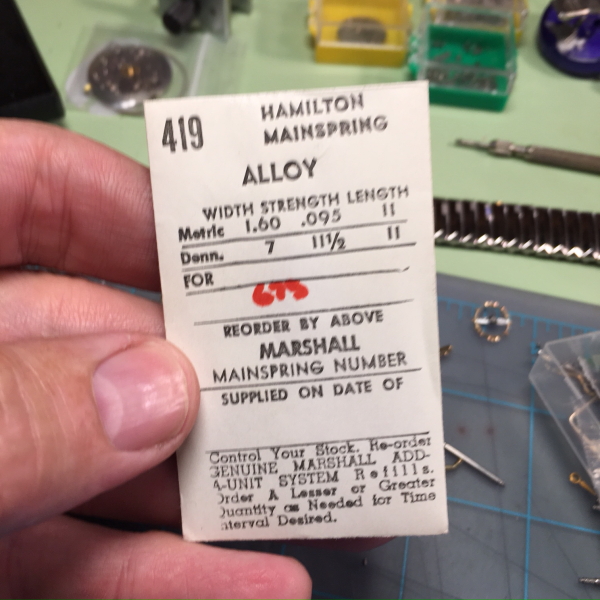 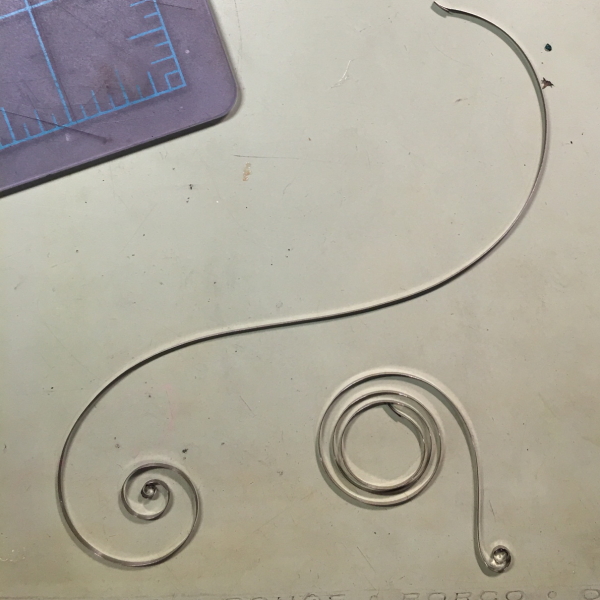 As expected, a fresh mainspring increased the amplitude considerably.  Anything over 250 degrees in good in my book. 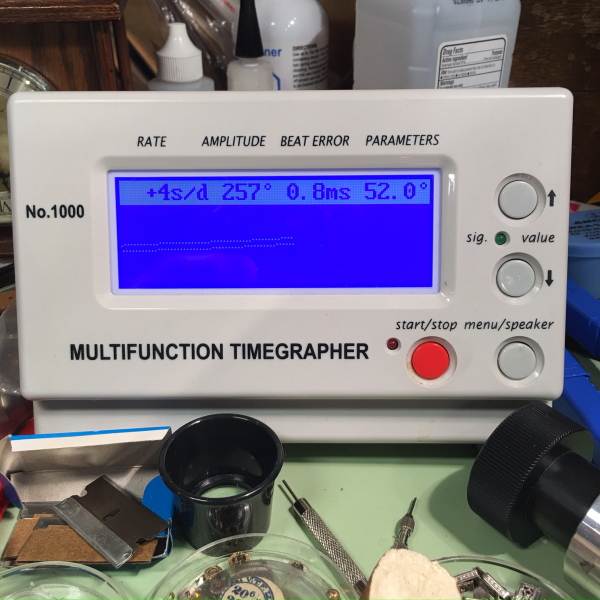 I actually wore the watch today on it's shakedown cruise and in the sunlight the dial looks a lot different than my light tent.  It is a little splotchy but it's a rather odd texture too. 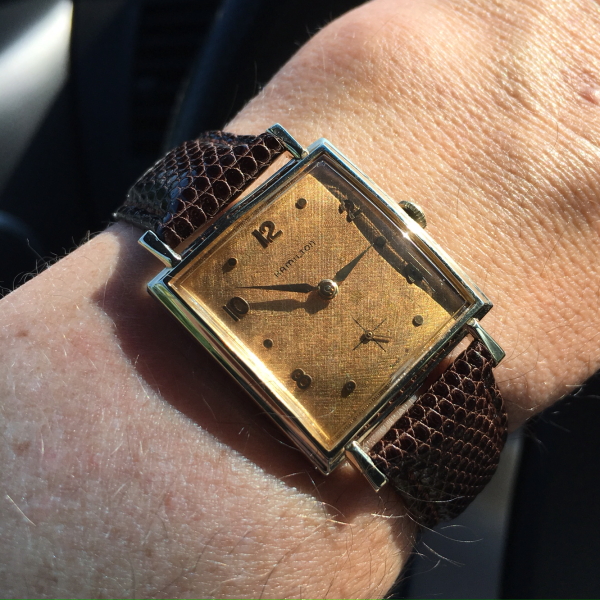