In today's world you can set up your phone to tell you the time in any time zone.  When you travel from one time zone to another, your technology automatically adjusts.  That wasn't always the case though, and it wasn't that long ago that managing timezones was a little more cumbersome.

Watch manufactures came out with all sorts of approaches to this challenge, especially since countries as large as the US have multiple time zones and you can easily travel between them.  Lots of higher-end watch companies offered a "GMT" watch of some sort.  GMT stands for Greenwich Mean Time and it is the time in Greenwich, England - or timezone zero.  A GMT watch typically has a hand that is set to the time in Greenwich and makes a full revolution in 24 hours.  Some organizations, like the military have an official time, usually based on GMT and no matter where you are in the world the time is based on GMT.  GMT watches have an interesting complication and you can buy GMT watches in today's modern Hamilton lineup.

Back in the 1950's traveling from coast-to-coast by air was becoming more possible and within the reach of the common man.  You could wake up in New York and go to bed in San Francisco - all in the same day.  Imagine that!  If you were a pilot or a salesman, you might wake up the next day and fly back home.  Who wants to set and reset their watch so often?  Not me (actually it's probably not that big a deal, really). 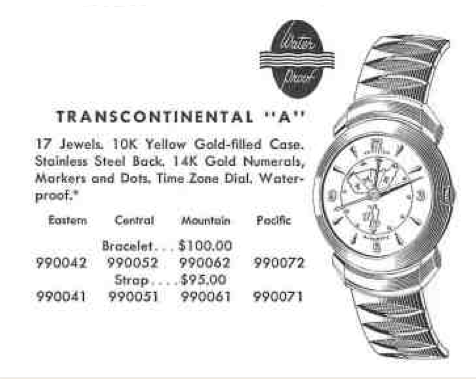 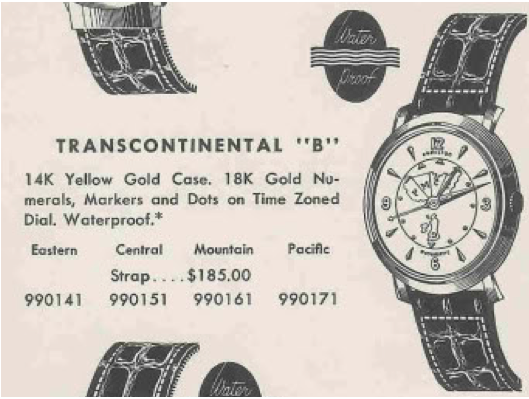 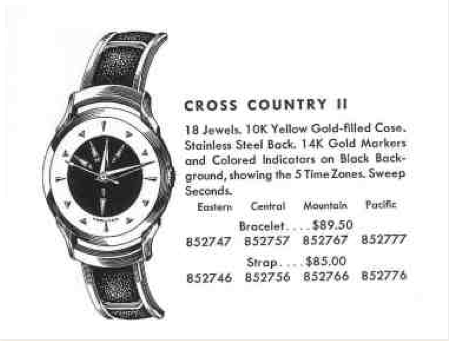 Curiously, what's not shown in the catalogs is the 1956 Cross Country, although it's known to exist.

If you look closely at the Cross Country II add, it has an 18 jewel movement.  There was only one movement with 18 jewels in the Hamilton lineup at that time, the 8/0 sized 730 movement.   The case is comprised of a 10K gold filled bezel with a stainless steel back.  It has a donut-shaped outer hour ring with a large rotating hour hand wheel in the center with several indices on it.  It also had a moveable hour hand that you could place anywhere, most likely in your home time zone and wherever you went you just needed to read the time based on the time zone you were in... assuming it was in the continental US or England, that is.  Otherwise you could read the time in Greenwich and do a little math in your head.

I recently received a Cross Country from a friend and fellow collector.  As you can see, he sent it with "some assembly required".  He had the outer dial refinished and asked me to overhaul the movement and put it all back together. 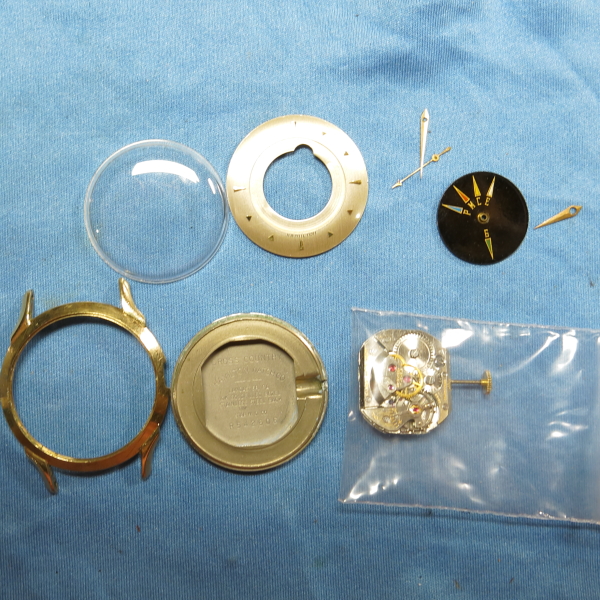 All of the Illinois movements are based on ETA grades as far as I know, and this one is no exception. In fact, this one says so right on the main plate (although it's upside down). 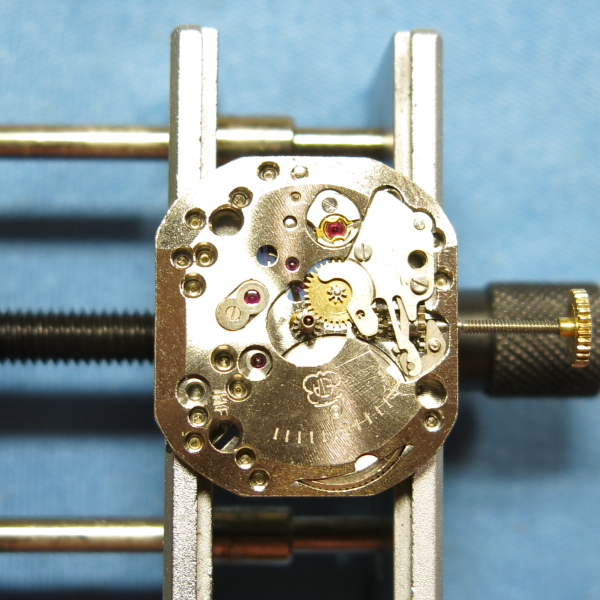 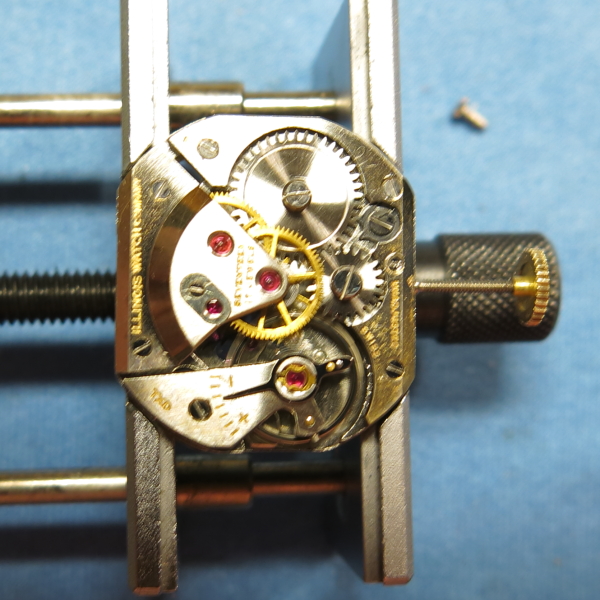 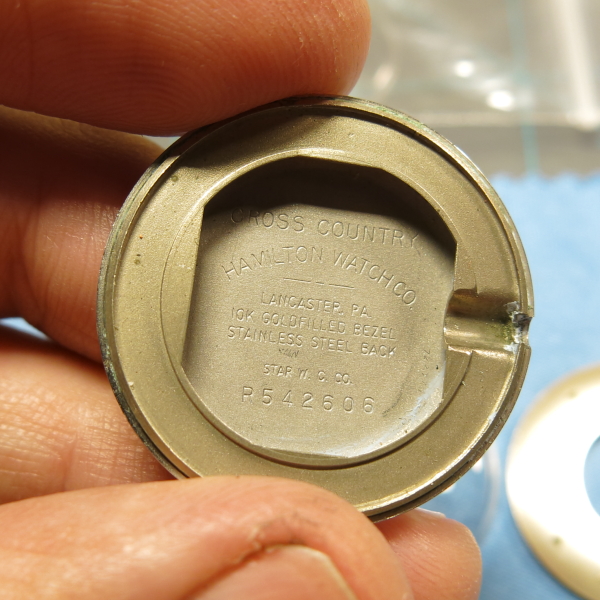 Piece by piece the movement is stripped clear of parts.  There's a little bridge on top of the center wheel and the 4th wheel goes right though it and moves the center second hand. 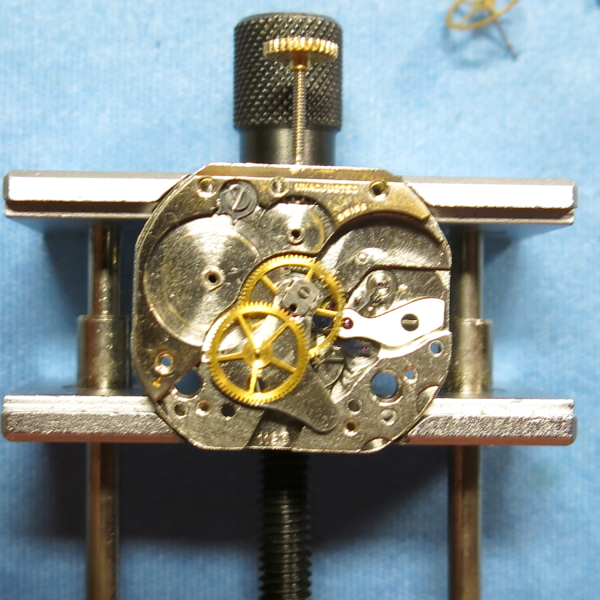 Everything is cleaned, dried and laid out pretty much like what I started with. 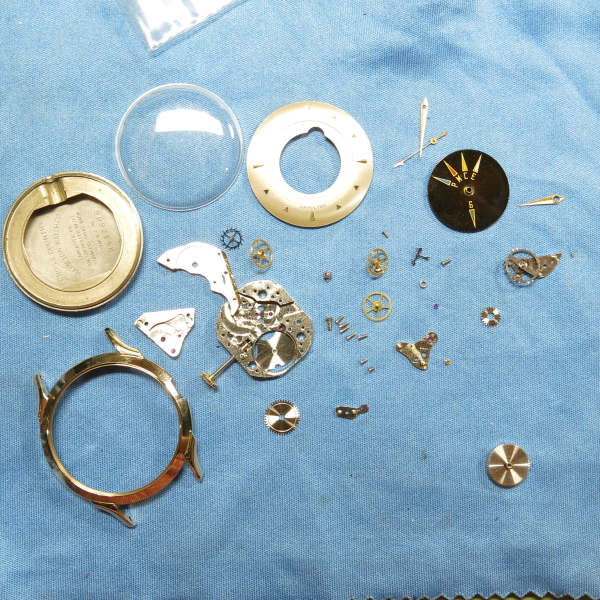 The movement is reassembled and ticking away nicely. 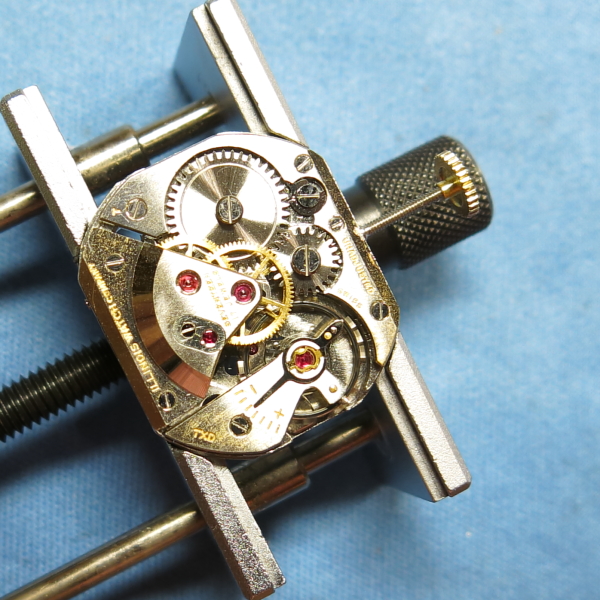 It was originally running a little fast and you can see the slope of the two lines change and approach almost horizontal as the beat rate reaches 4 second fast per day. 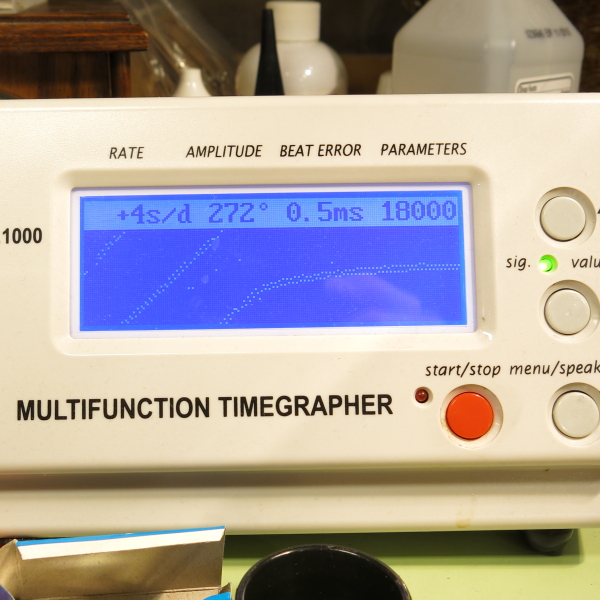 The outer dial can now get installed using the dial feet screws.  Notice the cutout to accommodate the balance's shock jewel assembly.  This entire assembly can be easily changed if needed.  It's held in place by a single screw. 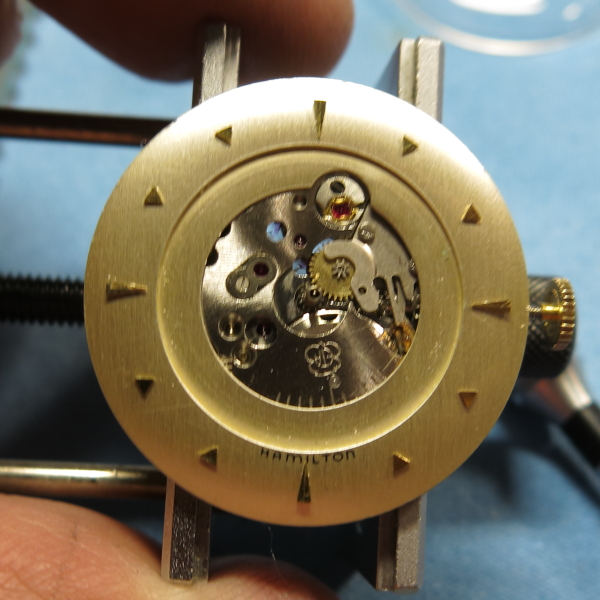 The inner ring then drops into place like a giant hour wheel and I'll line it up at 12:00 Pacific time and put the hour hand on there since this is a California model. 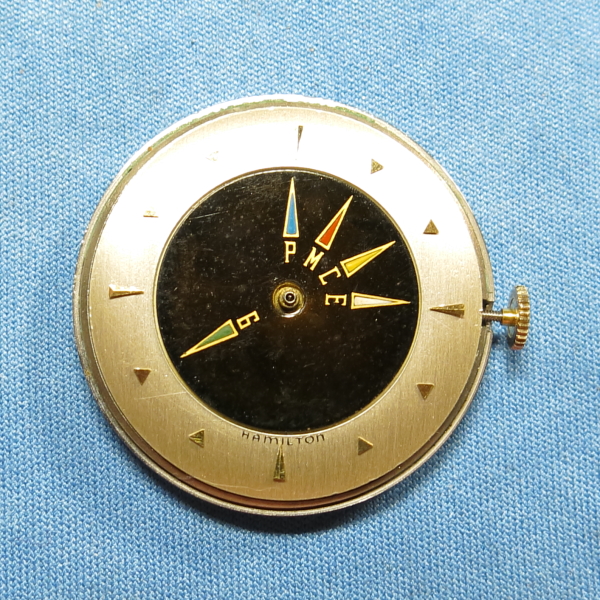 The finished watch is put back together and looks fantastic.  I also repainted the tip of the second hand so it stands out nicely against the dial.  This is a sharp looking watch and they are highly valued.  It's fun to be able work on it and not to have had to spend the big bucks to have actually bought it. 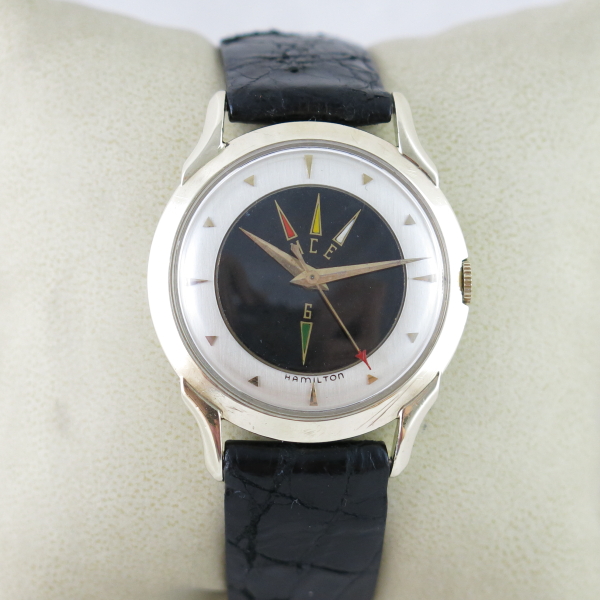