The last catalog for the 1960's that I'm aware of is for 1968 and 1969.  For any model that was introduced in 1969 but not continued into the 1970's, there is no catalog depiction.  There are some well known US-made uncatalogued models from this year - like the Hamilton Liberty Coin.  But how would you know it's a 1969 model if it's not in a catalog?

Some non-cataloged models showed up in Hamilton advertisements.  The Hamilton Oval comes to mind - it wasn't shown in the 1928 catalog but it was advertised.  Of course the serial number of the movement helps to date watches from that era.

In the mid 1950's Hamilton stopped putting serial numbers on movements but in the 1960s they started adding model numbers to cases.  When applicable, the last two digits of the model number represents the first year of production.  So a model with a number that ends with 69 would be a 1969 model.

Mystery solved - sort of.  The model number doesn't tell you the model name, if it had one.

I recently had someone contact me about a watch that they were given by their grandfather and they wanted to know more about.  As you can see in the photo, it was in need of some help since the date complication wouldn't work. 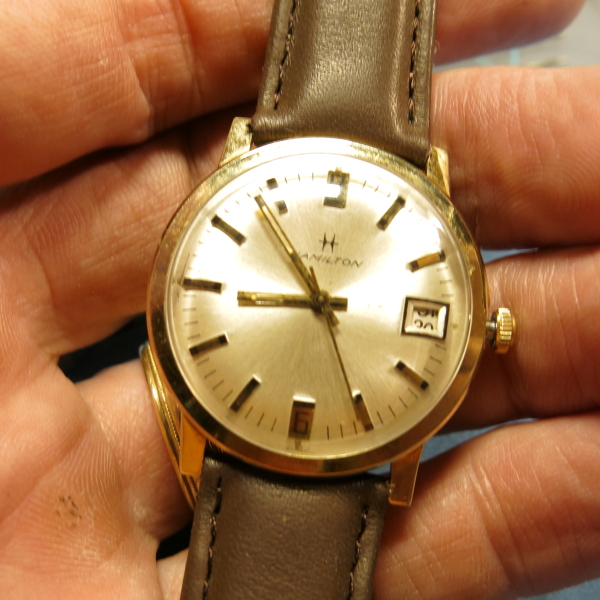 I pulled the crown on the project watch out in order to pull the movement out the front.  In this shot of the case back you can see the model number is 920669, making this a 1969 model. 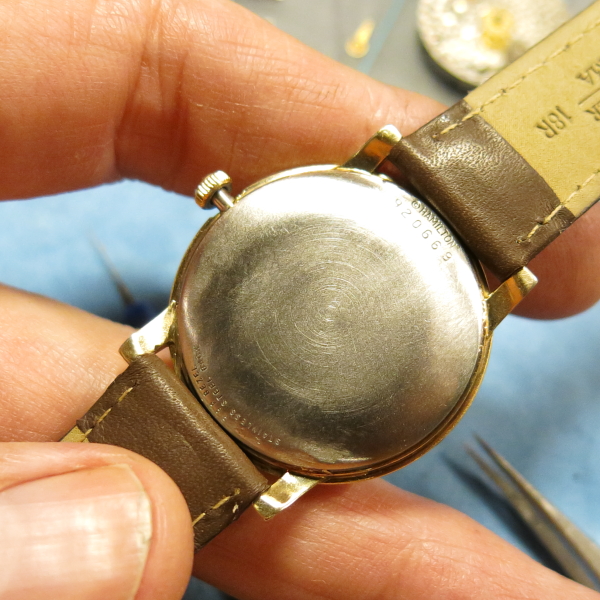 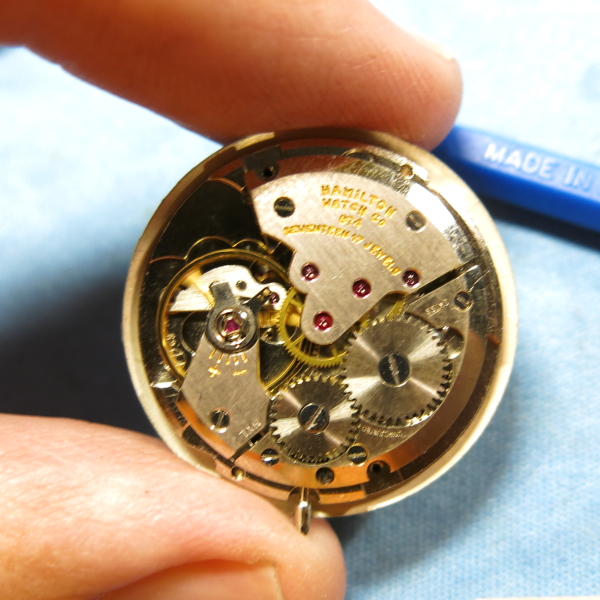 As you can see on the inside of the case, there is a serial number that is unique to this watch.  This numbers doesn't signify anything.  Presumably another watch was 040 and another was 042.  Based on the 10K RGP bezel and stainless steel back, I would presume this is a Dateline S-67-something... maybe a 677 since there was a S-676 in 1966. 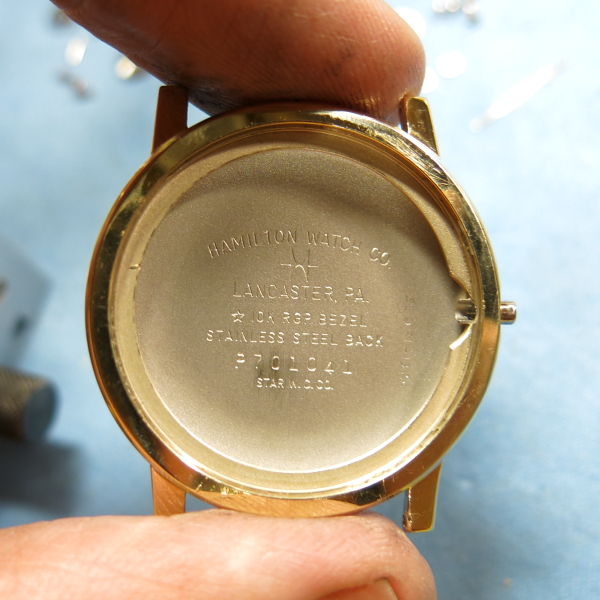 The owner of this watch said his grandfather had a friend who worked on watches and he lost a part that made the date function work.  With the dial removed, I'd say he lost at least three parts.  First the driving gear for the date drive wheel is missing.  So there's nothing connecting the hour wheel in the center to the large golden wheel in the upper left.  There's also a screw missing for the set bridge.  Finally, based on the date being stuck between 30 and 31, I suspect the date jumper spring is also missing. 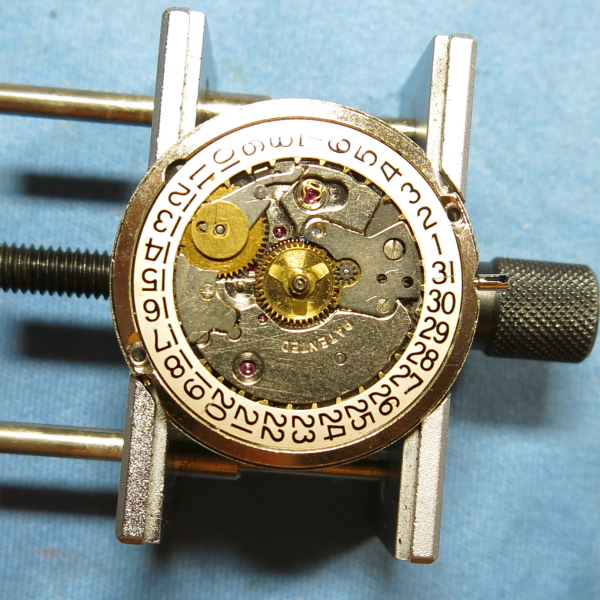 Yup - there's no U-shaped spring pushing the date jumper against the date wheel.  The date jumper centers the date wheel in between teeth when the drive wheel rotates the wheel clockwise.  I should be able to scavenge all of the missing parts from a donor movement. 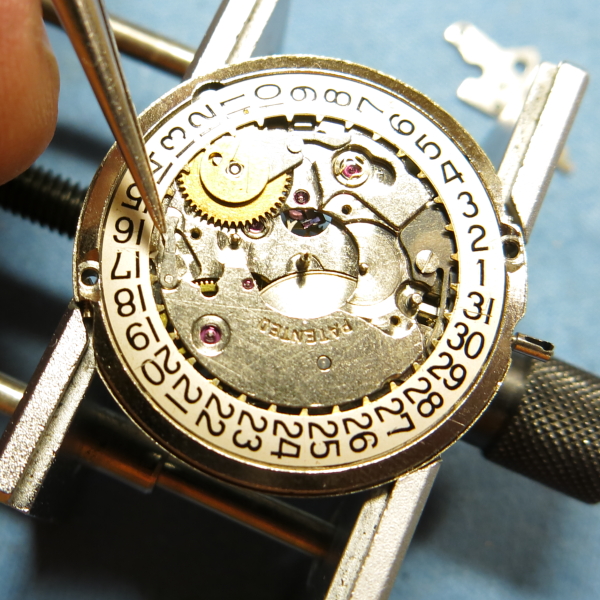 I don't really like to work on watches that someone else has already buggered up.  I know I'm not alone in that preference - most professional watchmakers feel the same way.  It can take a lot of time to find and fix things that aren't right.  However, it's not usual to lose a part - tweezers can send a tiny part screw off into the stratosphere, never to be seen again.  What is unusual is to not replace it when you can't find it.  So I suspect the last guy to work on this watch wasn't a professional and that means this watch could have some other serious issues.

Everything gets taken apart, inspected and thoroughly cleaned. 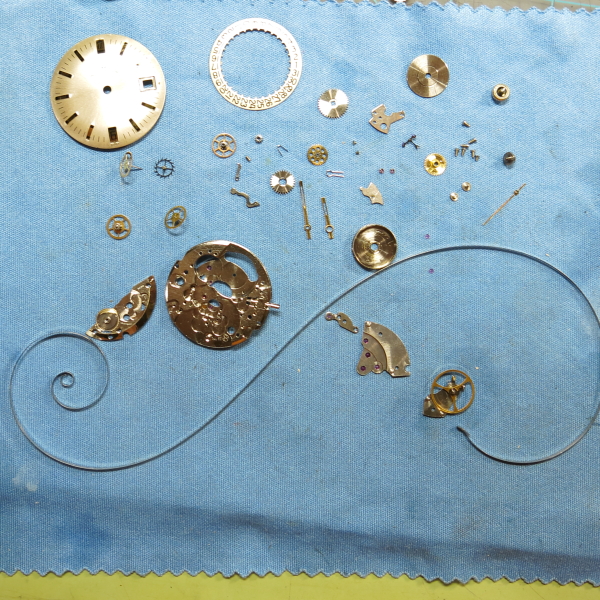 The hands were missing most of their luminous paint.  So I will reapply a fresh coat. 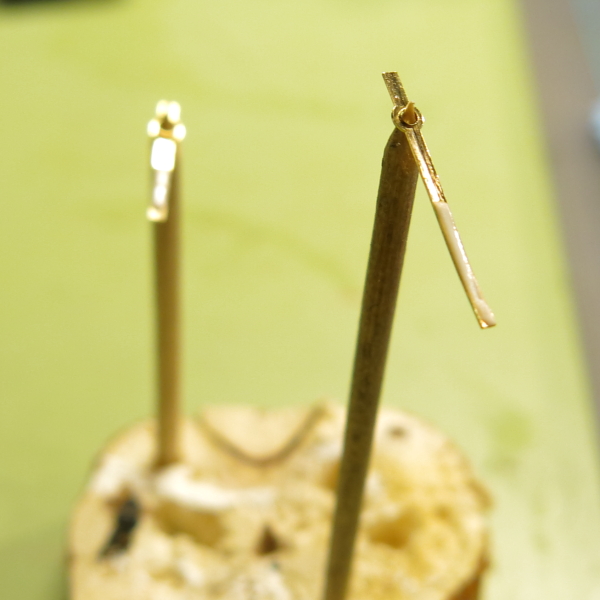 The reassembled movement is now ticking away but the motion doesn't look quite right to my eye.  I'll let the timer tell me what's going on inside. 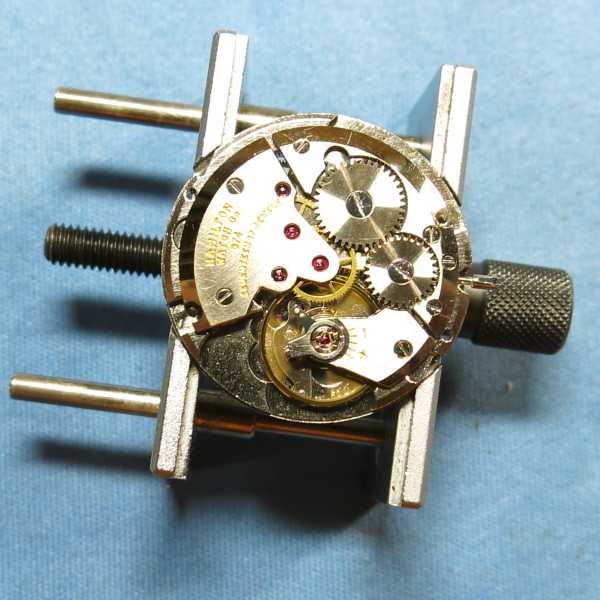 The beat error is a bit high - another clue that the last guy who opened this watch wasn't a pro.  The amplitude of 133 is way too low.  That tells me either the mainspring isn't the correct one for this watch or there's a problem with the barrel. 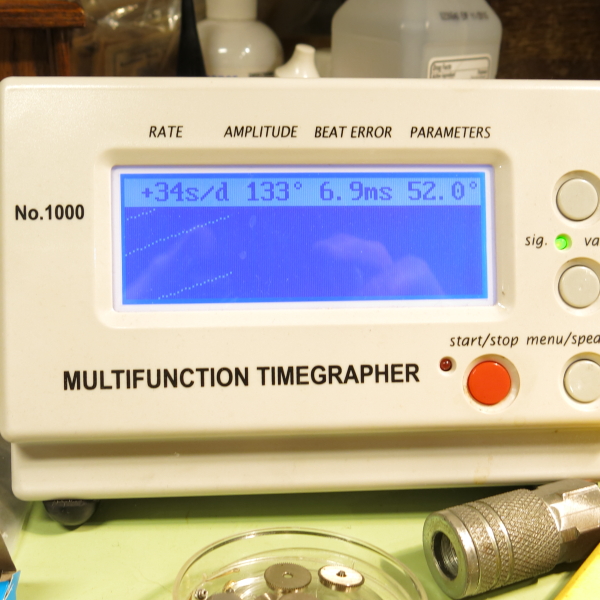 First I'll tweak the hairspring stud index and reduce the beat error.  Anything less than 1.0ms is good in my book but the closer to zero the better. 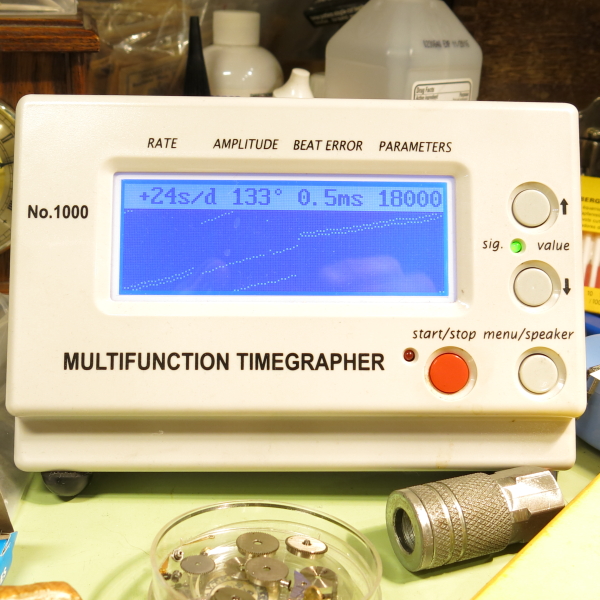 Sure enough, when I reinstalled the mainspring the lid on the barrel didn't fully close, or it popped back up.  That's enough that a tiny amount of drag was introduced, robbing the watch of power and resulting in low amplitude. 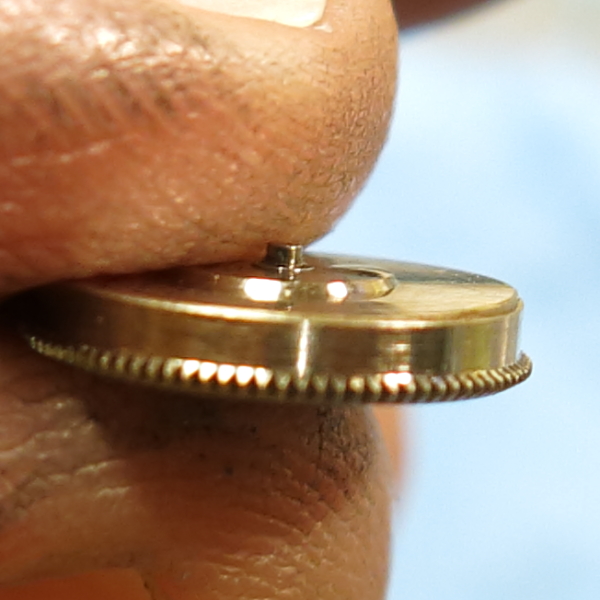 Okay - now I'm up to over 200 degrees.  That's not too bad since I haven't fully wound the watch.  There's no crown on the stem so it's a little hard to wind. 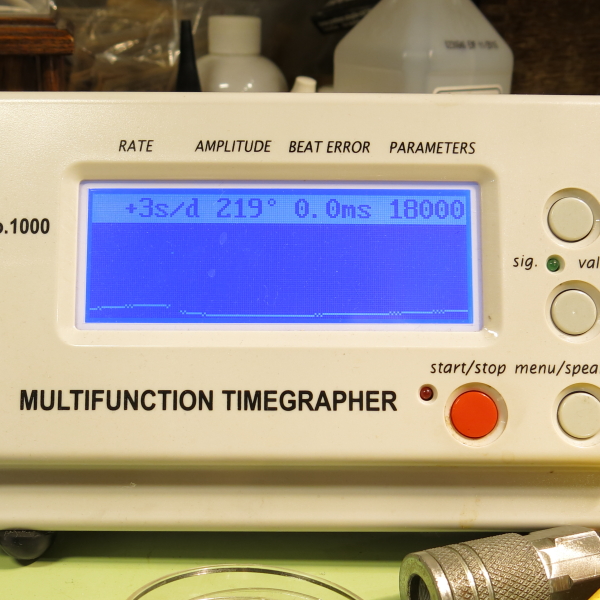 All of the parts for the date complication are present and accounted for.  Now the date function should work. 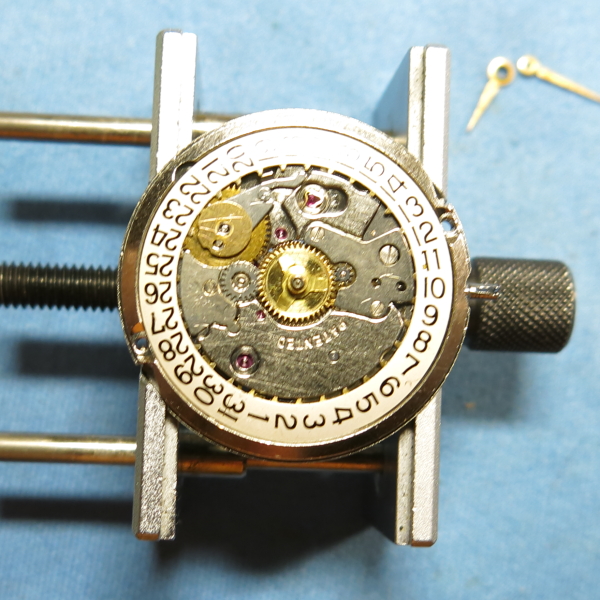 With the movement reinstalled in the case, I can fully wind the watch.  Notice the amplitude has increased.  I'm happy with an amplitude over 250 degrees. 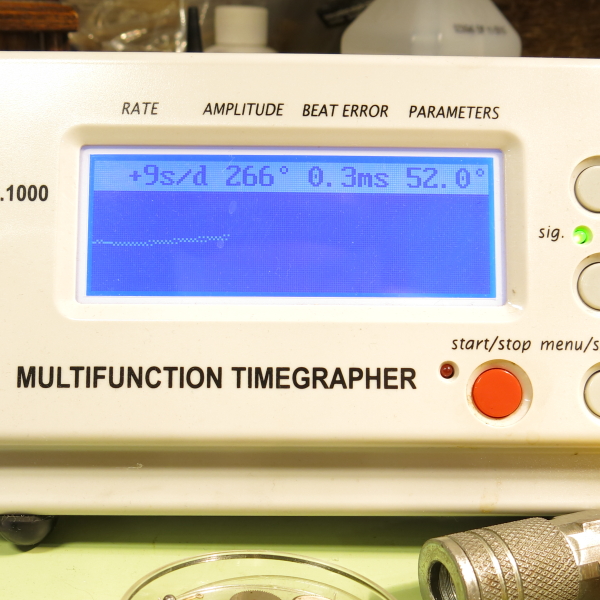 I reinstalled the hands at 12:00 midnight so the time will match when the date changes.  Notice how the date is now centered in the window - that's thanks to the date jumper spring that I installed.  The new luminous paint on the hands really stands out nicely.   This watch is ready for wrist time and will be a great memento of the owner's grandfather. 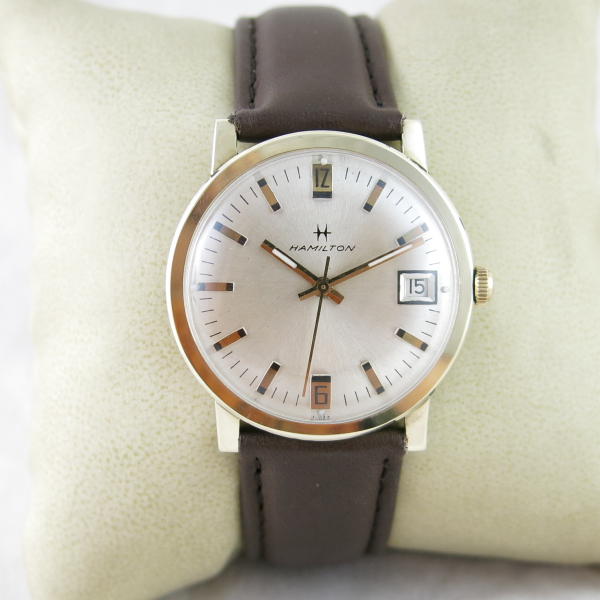