In 1969, the Hamilton Watch company was purchased by the Swatch Group and ceased to be "an American watch company".  Hamilton still had a presence in Lancaster, Pennsylvania but certainly the end of an era was marked at this time.

The last watch to be made by Hamilton with an American-made movement in an American-made case was the Coin, sometimes called the Liberty Coin.  It was not catalogued and a very scarce few were made.

Here's what noted Hamilton-expert René Rondeau once wrote about the Coin watch when he had one for sale....

"...HAMILTON "COIN WATCH". This is one of the most unusual as well as one of the most historic of Hamilton watches. It was produced in 1969 just after all production of movements was shut down at Hamilton's Lancaster, PA factory in January 1969. Hamilton used the last remaining stocks of the superlative grade 770 movement with 22 jewels to complete this very interesting and rare watch. It was never cataloged and very few were made. It was produced in both rolled gold-plate, as this example, and in 14K solid gold. According to Paul Frankenfeld, a production manager at Hamilton at the time, only 50-75 were made in RGP, and 10-15 in 14K gold. However, based on my own experience, I believe these figures are too low. I think there were probably 150-250 in rolled gold-plate and 50-100 in gold, based on surviving examples. That still puts this watch among the very rarest of all Hamiltons ever made. The style is obviously copied after the Corum gold coin watches that were popular at the time. The dial is embossed to resemble a gold coin, and the edge of the case is reeded like a coin. It is very much a watch of its time -- a bit garish but certainly an eye-grabber! As a collectable it is one of the most sought-after of all Hamiltons because of its extreme rarity. This example is extra nice, with excellent rolled gold-plate case with no wear, and perfect original dial..." (quoted from rondeau.net).

The coin is a fairly large watch by vintage standards.  You'll find that some watches have pointex or alpha style hands and some have straight baton style hands.  I think they used what was available as you'll find both hands on 14K or the gold filled cases.  The Coin is also noteworthy in that there is no second hand - one of only a handful of models to not have a second hand.

I think it's a somewhat polarizing design as people either really like it or they think it's really ugly.

Personally, I like it.  I think it's a very interesting and special watch and as such I reserve wearing mine for only the special-est of occasions. 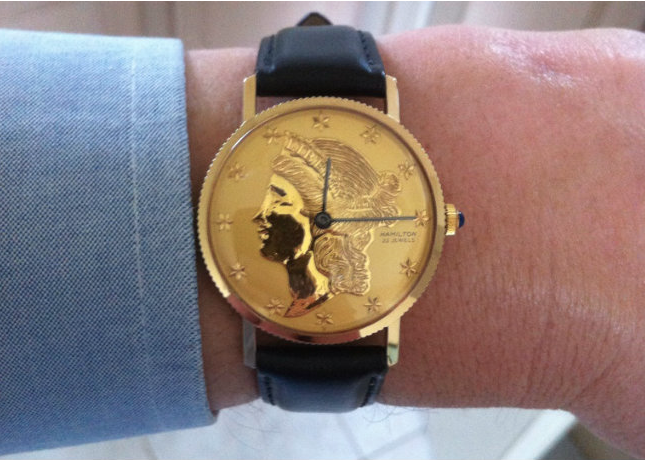 Mine (above) has a "stone crown" with a blue stone attached to the crown.  I've seen others (below) without a stone crown.  Without a catalog image, it's hard to tell which would be original. 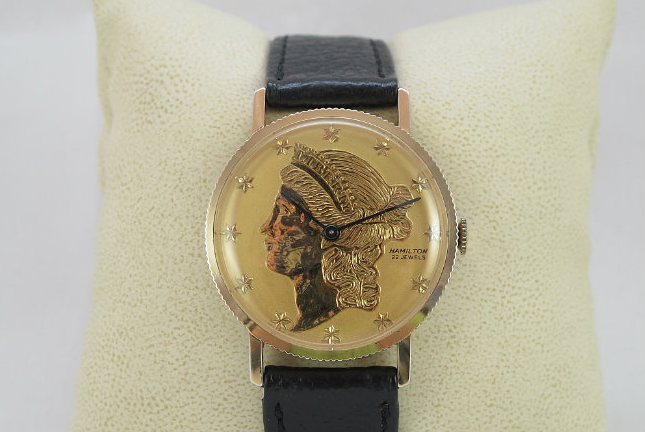