The Bentley is a very unique looking model with tubular lugs.  It was produced from 1937 through 1939.  If it looks familiar it may be because there's a similar gold filled model called the Bowman from 1939.  The Bentley came in solid 14K gold so it's much harder to come by.  It's also easy to distinguish from the Bowman by the rectangular dial.  The Bowman is a little more barrel shaped and has a round second hand register.

I've seen the occasional Bentley come up for sale but not too frequently.  When it does come up, it usually sells for good money... maybe $800 or even more if it's in good shape.

I recently got lucky and snagged a Bentley for a more reasonable, but still high, price.  It looked to be in very good shape though, so I pursued it hard and was victorious in the end.  The bracelet it came on is a nice design but much too small for me and probably too large for my wife.  Maybe this was Goldilock's watch? 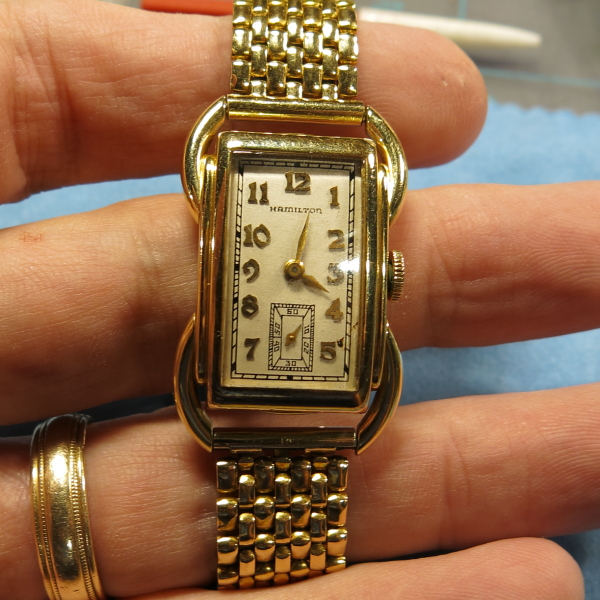 The back of the case is a typical 1930's snap back design with a little lip to pry the back off. 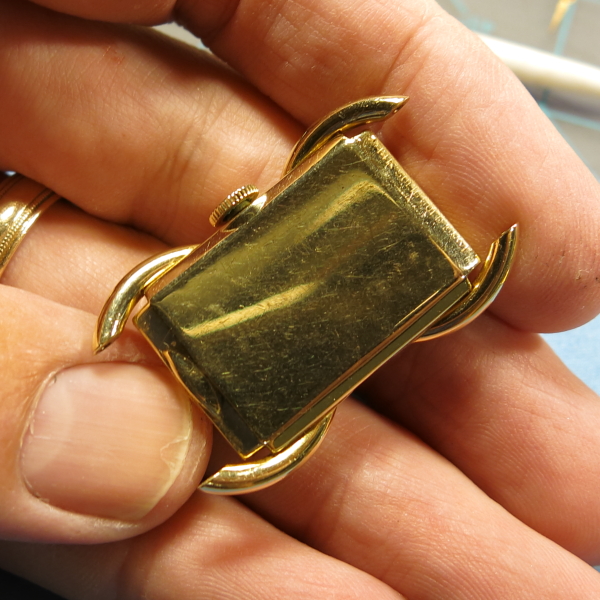 I saw in the purchase listing the dial had some schmutz around the 4 and 5.  I was hopeful that it was just superficial dirt.  Even in the somewhat blurry photo below you can see the tiny notch in the dial near the crown that indicates this dial has been refinished at least once.  I'd rather not have to do it again although I'm sure it could be redone perfectly. 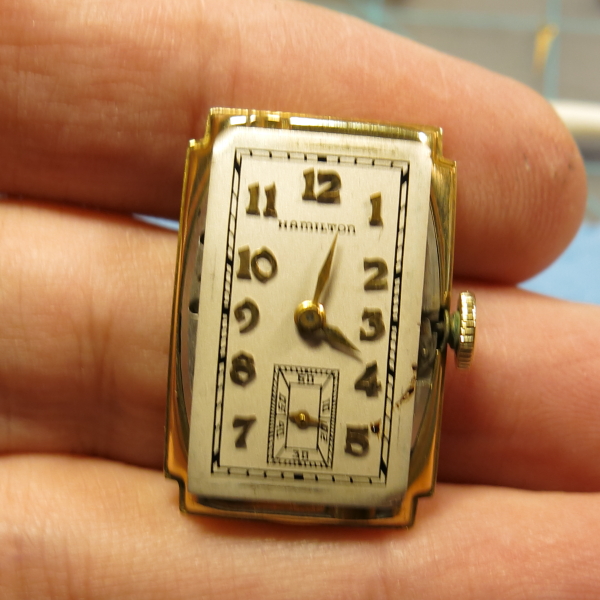 The 19 jewel 982 movement has a serial number that dates the watch to 1937, just as it should.  Based on the dull brass color of the jewel settings, I'd say it's been a long time since this watch saw a watchmaker's bench. 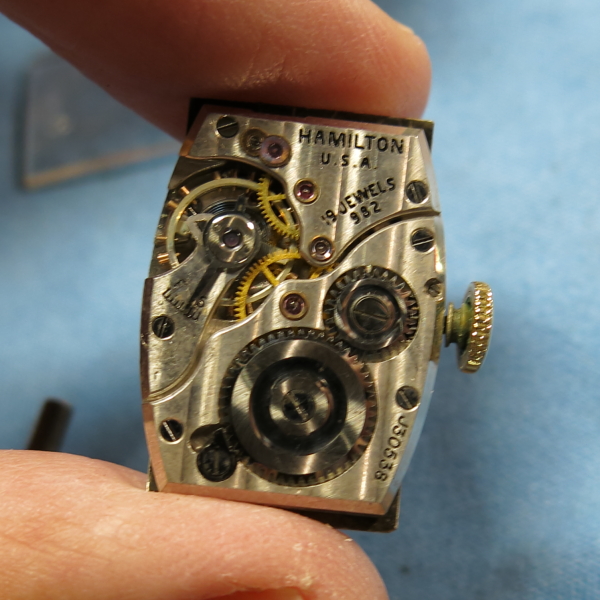 One thing to appreciate about solid gold cases is they never show any signs of green verdigris.  There are couple of watchmakers' marks inside so this watch did receive some care at some point in the last 80 years. 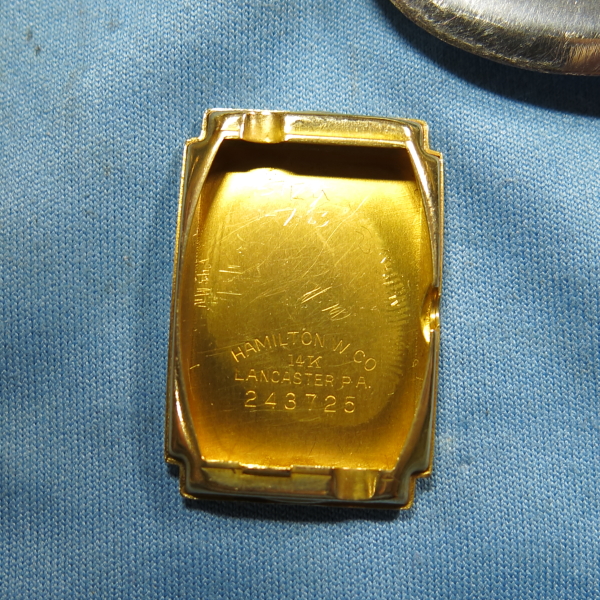 The back of the dial confirms this dial has been refinished at least once, probably multiple times. 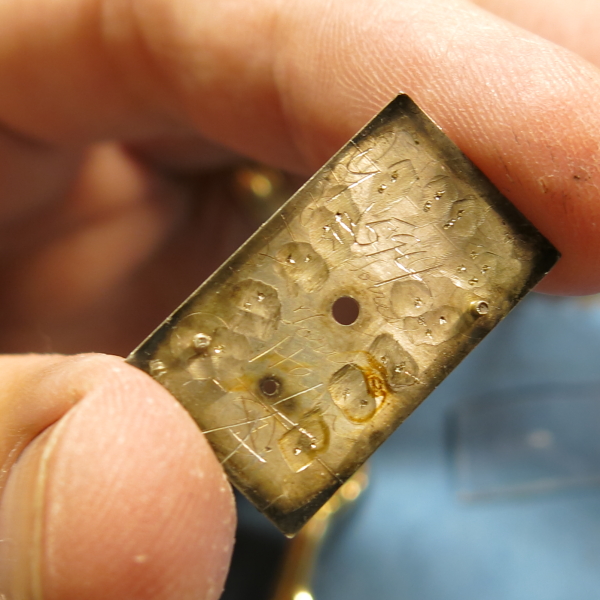 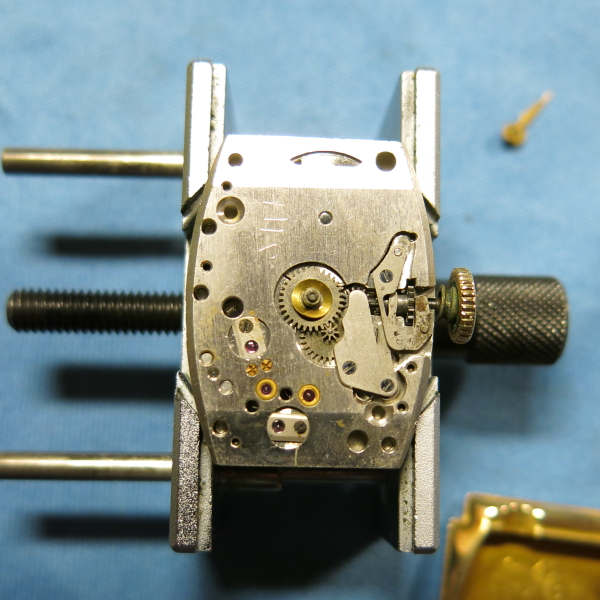 This watch is going to need a new mainspring.  You can see in the shot below that the old mainspring is set and has lost much of it's energy. 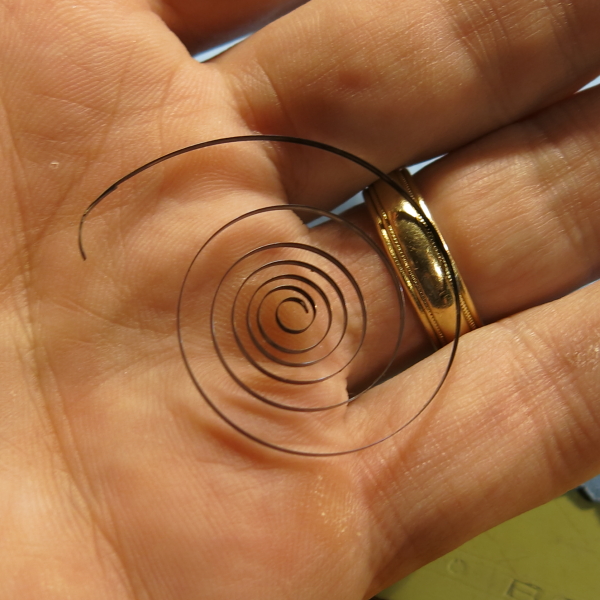 A new white alloy spring will give this watch 40+ hours of reserve. 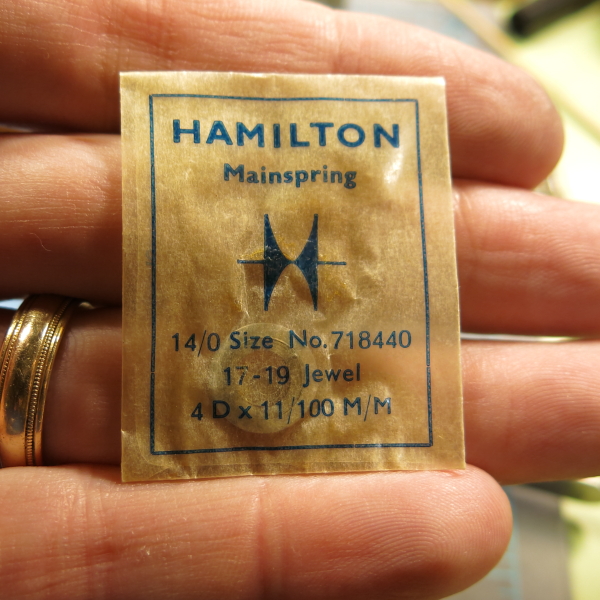 Everything is cleaned and dried.  The plastic crystal wasn't too bad so I will reuse it while I order a new glass one. 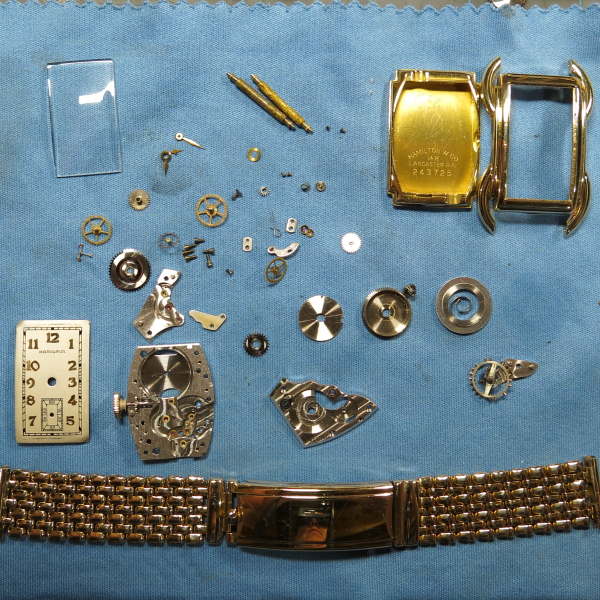 The watch is running with nice motion. 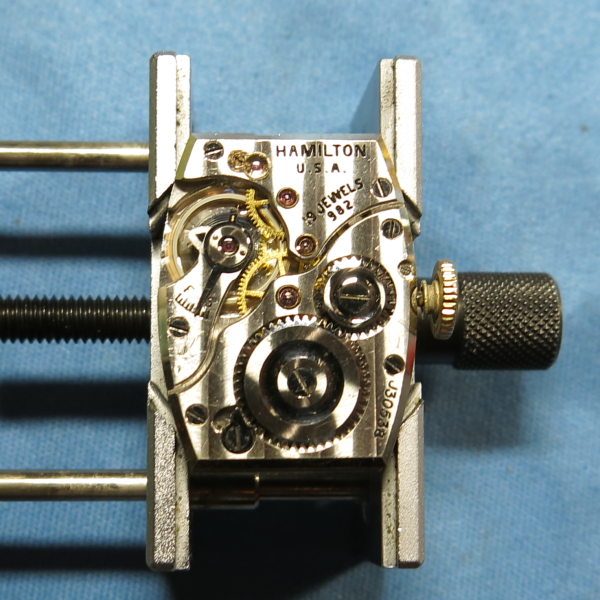 What the heck?  This watch appears to be making a lot of noise and not registering anything but I think it's just running super fast. 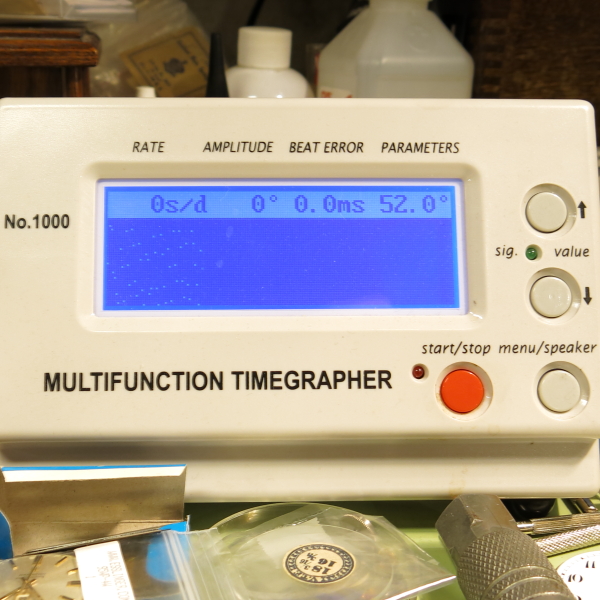 I fussed and fussed and fussed with the balance but just couldn't get it to run well.  There's a big difference between a ticking watch and a watch that keeps accurate time.  Eventually I threw in the towel and installed a balance from a donor movement. 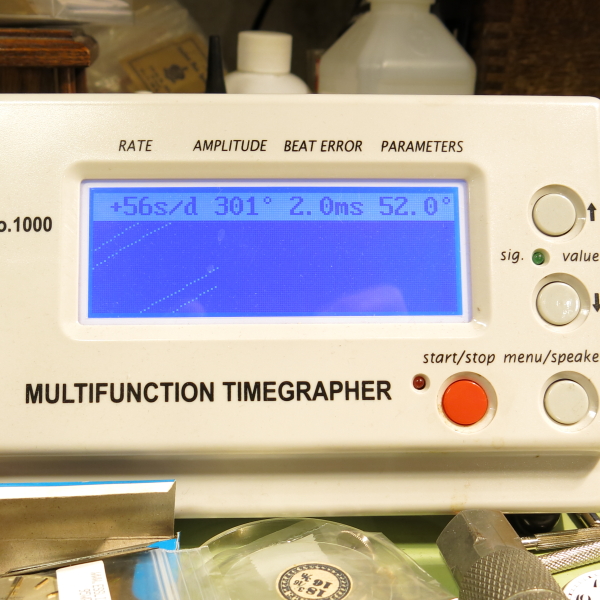 Oops! After I was finished I noticed there was a timing screw in my cleaning solution.  It must have vibrated off the balance wheel while in the ultrasonic.  That would dramatically lower the mass of the balance and speed the watch up accordingly. 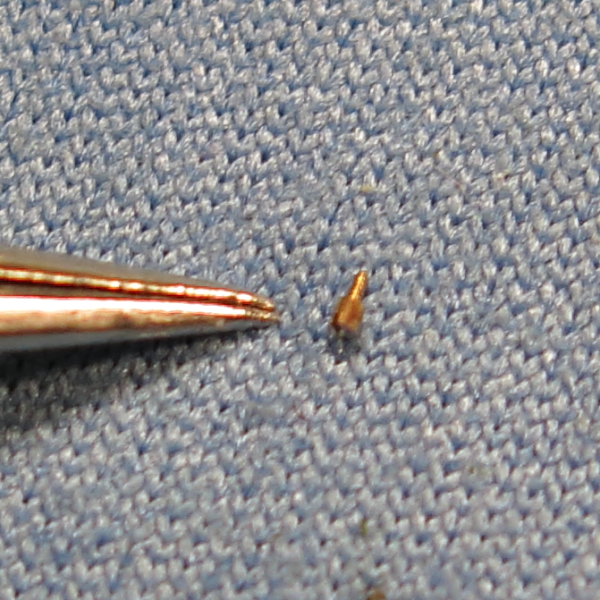 Timing screws are positioned symmetrically on the balance to keep it in poise.  It's not hard to see where the missing screw should be installed. 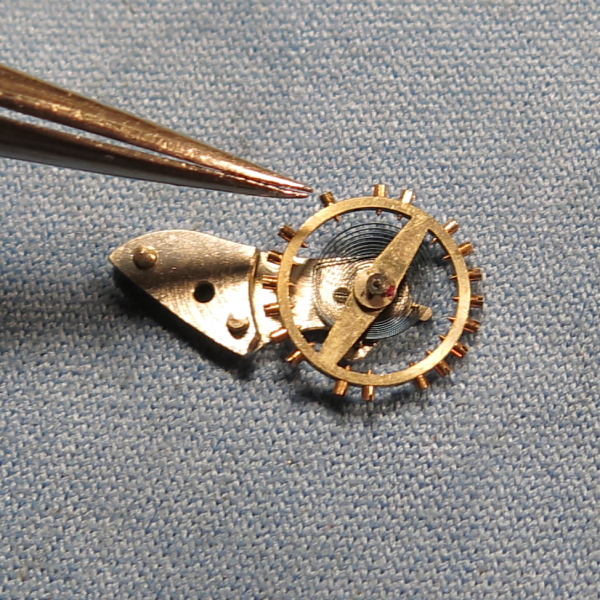 Since the watch is running nicely with the donor balance I will not try my luck by replacing it again.  I'll save the original balance for another day.  The finished project turned out fantastic.  The case is sharp where it needs to be sharp and smooth where it should be smooth.  I may have to find either a good hiding place or a short 16mm strap, because if my wife sees this watch she may want to keep it. 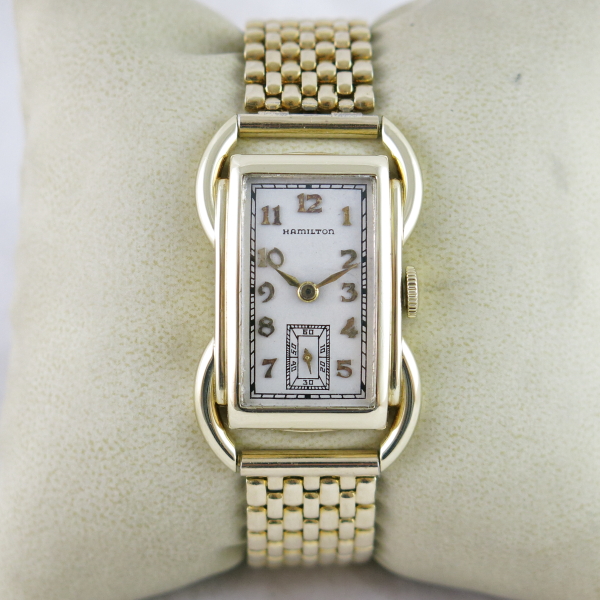