Say what?  What's an Elgin model doing on a Hamilton blog?

Elgin collectors and Hamilton collectors joke with each other like the "Hatfields and McCoys" feud.  However, deep down inside there is a mutual respect and appreciation for each brand. 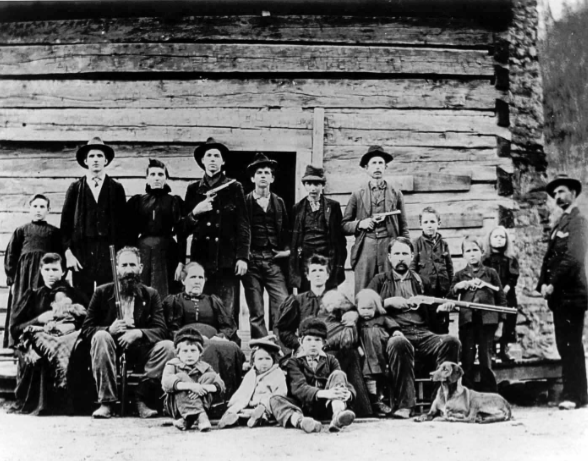 Vintage Elgins are fine watches and I thought it would be interesting to show some of the basic similarities and differences.  Plus, I think the model I've chosen is very cool - so cool that it could almost be a Hamilton. 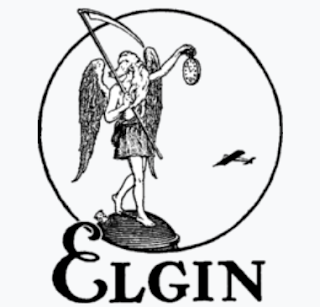 Unlike Hamilton, when Elgin called it quits in 1968 it really was quits.  The brand name "Elgin" traded hands many times before eventually being acquired by a company who made watches in China.

You can pick almost any genre of watches to compare the two watch companies and arrive at a vigorous debate of which was better (of course the answer is almost always Hamilton).

The one area that Hamilton would not perform well is entry level watches because Hamilton didn't compete in that market.  Elgin made loads of models with jewel counts as low as 7 jewels.  Other than the very early years, Hamilton's most basic models featured at least 17 jewels.  Furthermore, Elgin introduced models with rolled gold cases with stainless steel backs much earlier than Hamilton did.  So the range of prices in Elgin's line up was broader than Hamilton's and there are WAY more vintage Elgin watches out there than there are Hamiltons.

As a result, there are many intriguing Elgin models and even more not-so-interesting ones.  My interest in Elgin was originally piqued by their presence in WWI trench watches.  Elgin and Waltham made loads of attractive trench models.   In fact, if you're interested in this era of watches, check out Stan Czubernat's website -  LRF Antique Watches.  Stan has also authored a couple of books on the subject that you can purchase from his site. 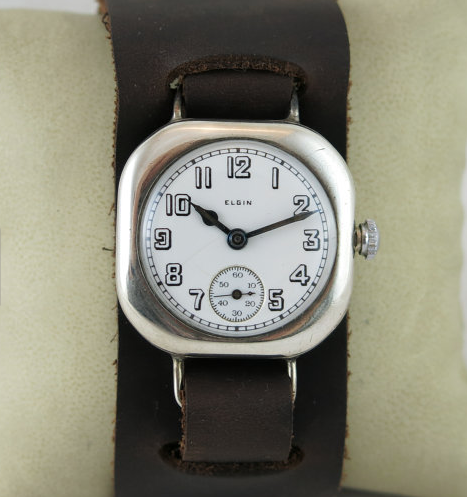 Elgin made very interesting Art-Deco era watches, they made WWII military watches, and they even made futuristic models in the 1950's, just like Hamilton.  One thing Elgin has over Hamilton is Elgin made some (but not all) of their self-winding movements in the US while Hamilton imported all of their automatic movements. 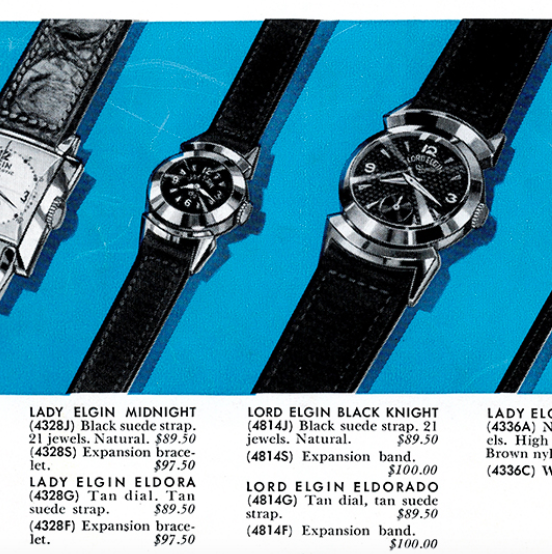 If you see a Black Knight with a golden dial, it's really an Eldorado. 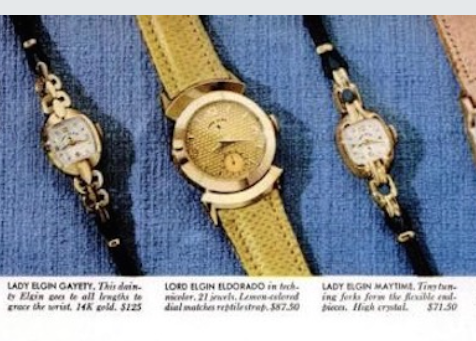 The Black Knight comes in a 14K gold filled case with uniquely-shaped lugs.  The dial is textured and is almost golfball-like in appearence with funky applied numerals and triangular markers.  My project watch has a little wear to the high points of the bezel but it looks to be in decent shape overall. 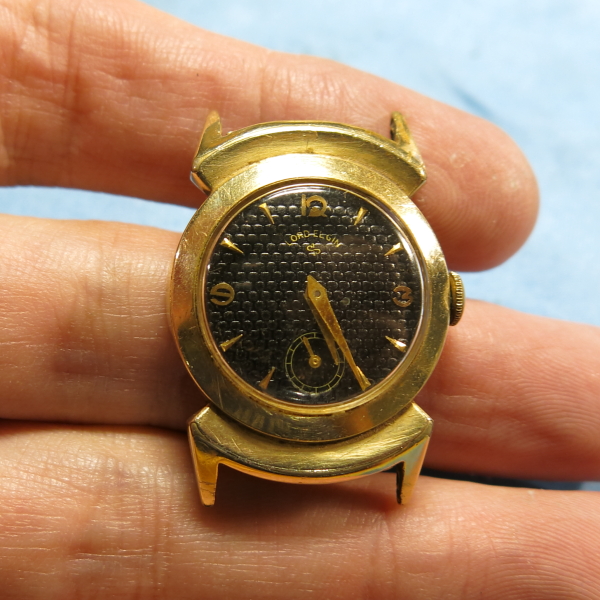 The back of the Black Knight is gold filled too.  So it was a mid-to-higher end model in the line up and competed directly with Hamilton models at the time. 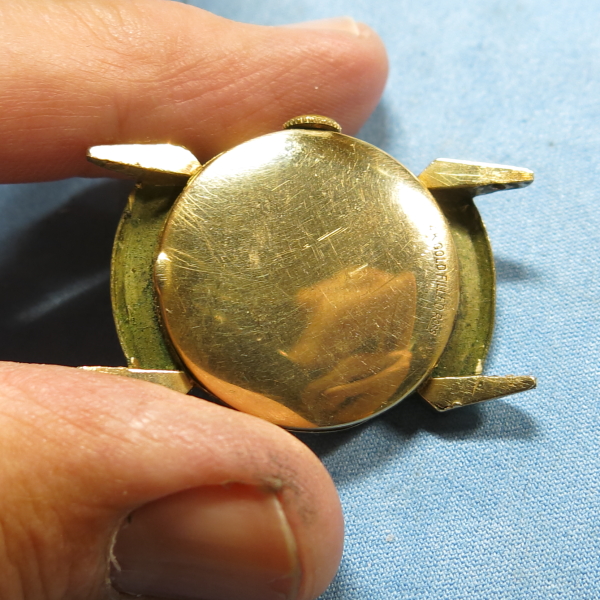 With the bezel out of the way you can see the unique texture of the dial.  It's actually the opposite of a golf ball as the dimples go outward rather than into the dial. 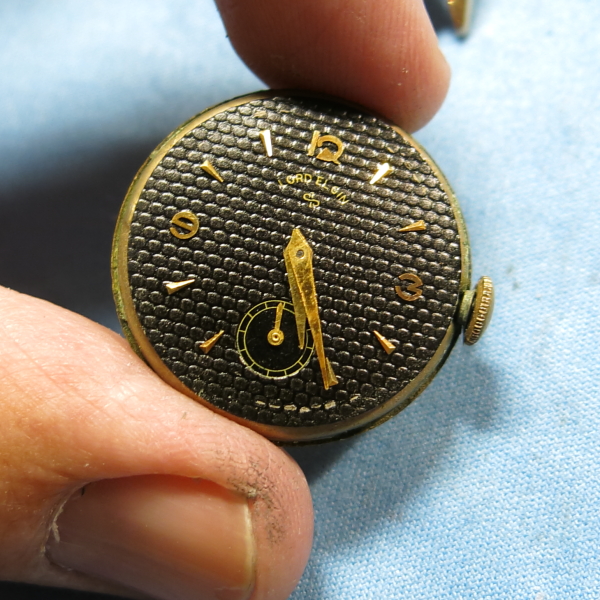 I would assume the number 4814 is the model number for the Black Knight and could have been used back in the day to order any parts needed to maintain it. 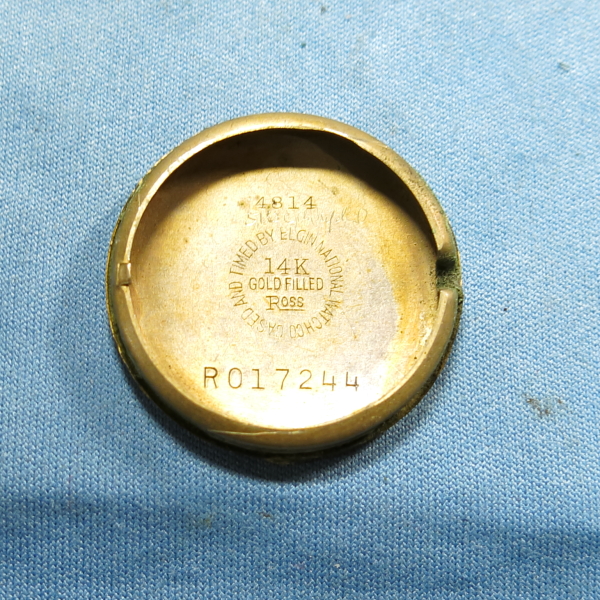 Behind the dial is an 8/0 sized 21 jewel 680 movement.  It's very similar to Hamilton's 8/0 sized 747 movement but features 4 additional cap jewels.  What it lacks is the detailed damascening that Hamilton added to it's US-made movements.  So the 680 isn't as pretty to look at as a 747 but the 680 features more jewels.  Neither movements are shock jeweled at the balance. 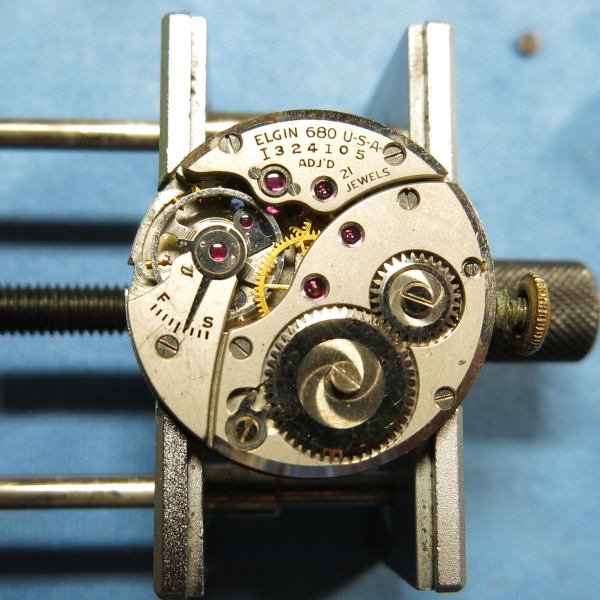 The finishing on the dial-side of the movement is less glamorous as well.  However all movements look alike when it comes to this perspective. 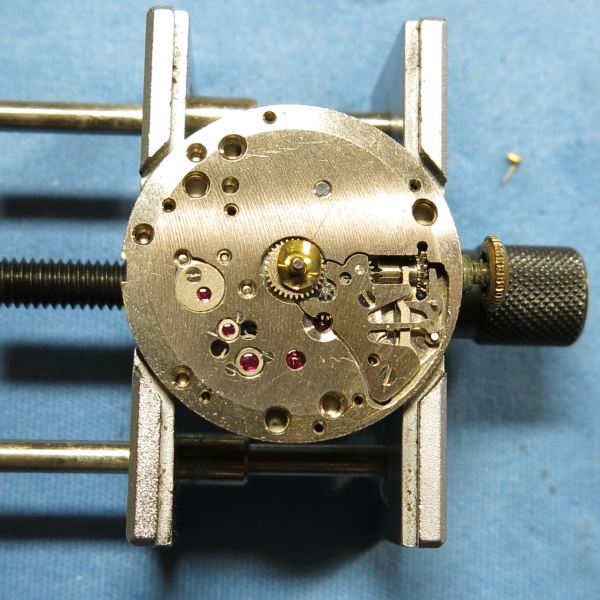 The mainspring in the watch is a white alloy design.  I will take it out, clean it and reinstall it after the parts are cleaned. 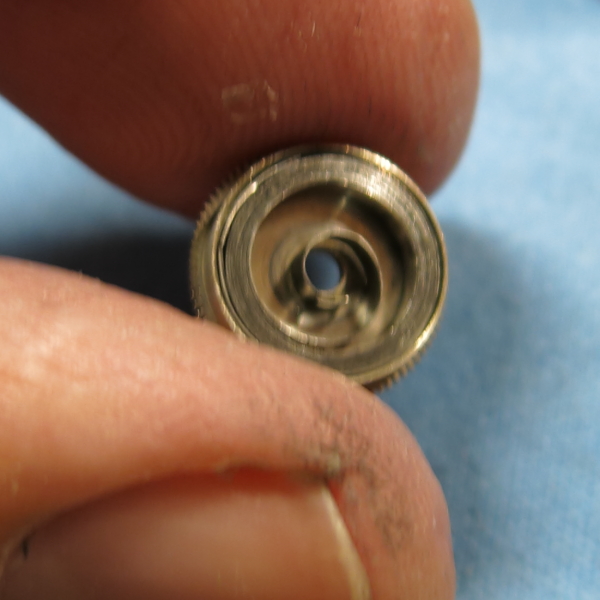 One of the interesting features of the Black Knight is it has a conical crystal and comes to a point in the center.  My project watch lacks this feature. 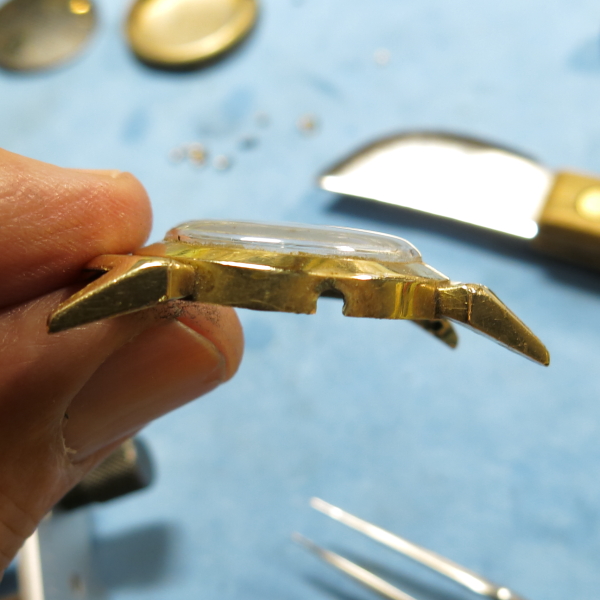 The proper crystal for this model is relatively hard to come by.  From the front it looks like an ordinary round glass crystal. 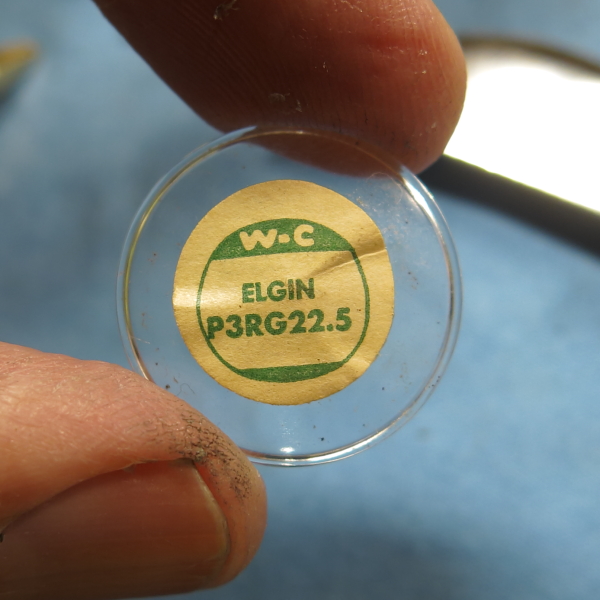 From the side, however, the crystal has a much different appearance. 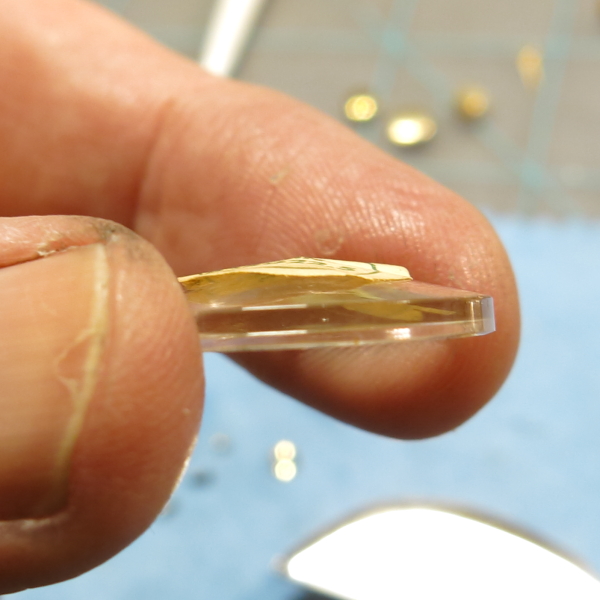 Just like my Hamilton projects, this Elgin movement is taken fully apart and thoroughly cleaned. 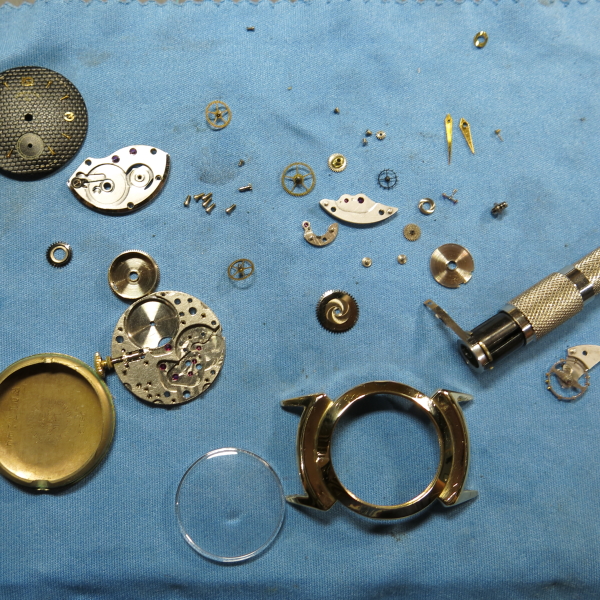 The watch is running but the amplitude is a bit low.  Typically I suspect the mainspring or barrel is the issue when I see this as the watch is lacking power - assuming the movement is clean.  A dirty watch will have low amplitude too. 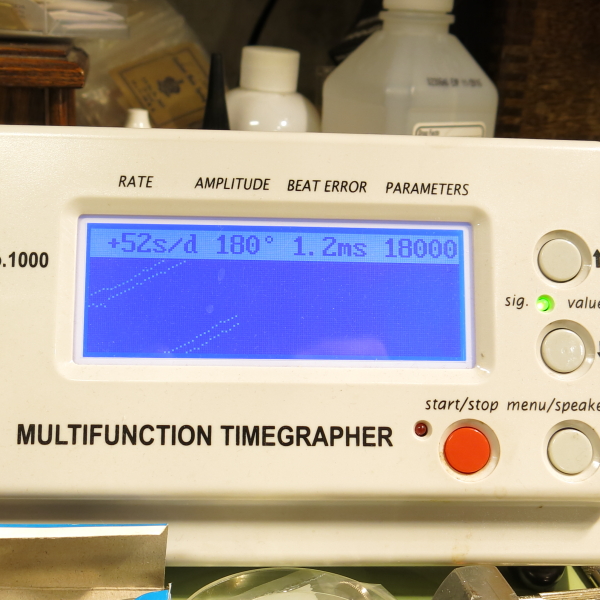 When I went to investigate the mainspring, it turned out it was broken!  So I will have to replace it in order to complete the watch.  That, in a nutshell, is why I focus primarily on Hamiltons - it's much easier to build a stockpile of parts for one brand than to do the same for several brands.  I'll need to investigate what mainspring would be appropriate for this grade and try to find one.

With that in mind I can still complete the assembly of the watch.  Paired with a fresh 18mm lizard strap and a proper conical crystal, this example of the Black Knight turned out great.  The crown disintegrated during the cleaning and had to be replaced too.  The only one I had on hand was a little smaller that what was on beforehand but I think it still looks good. 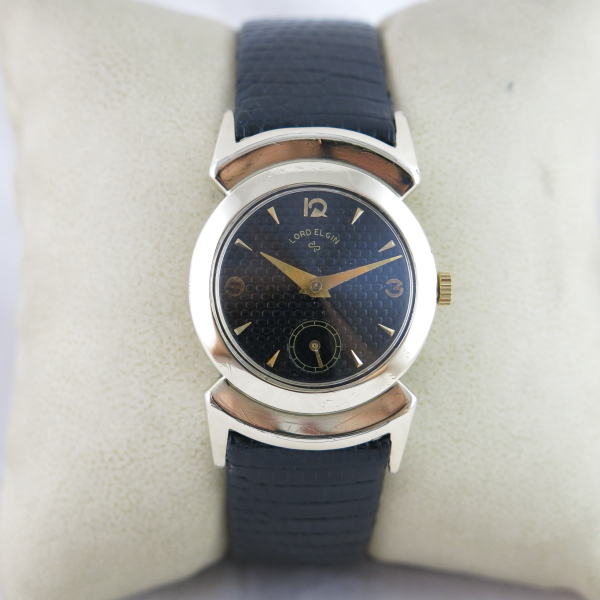 It's hard to photograph black-dialed watches.  So here's another shot from a slight angle. 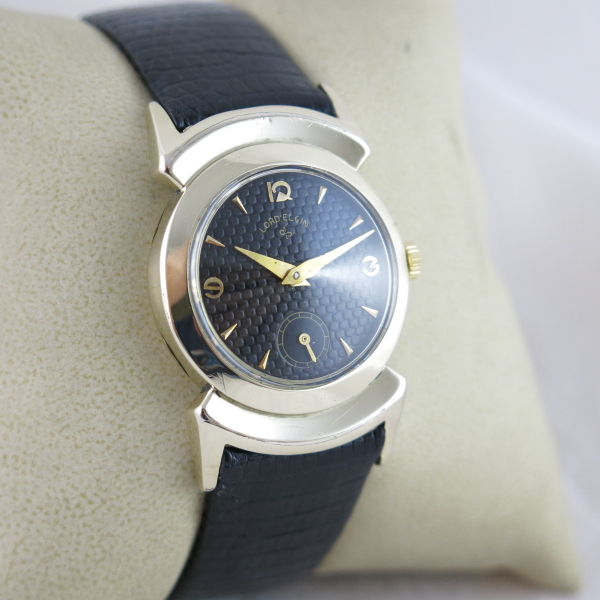 In this shot you can see what the conical crystal does for the model's design.  It's an important attribute that is lost if you install a flat crystal. 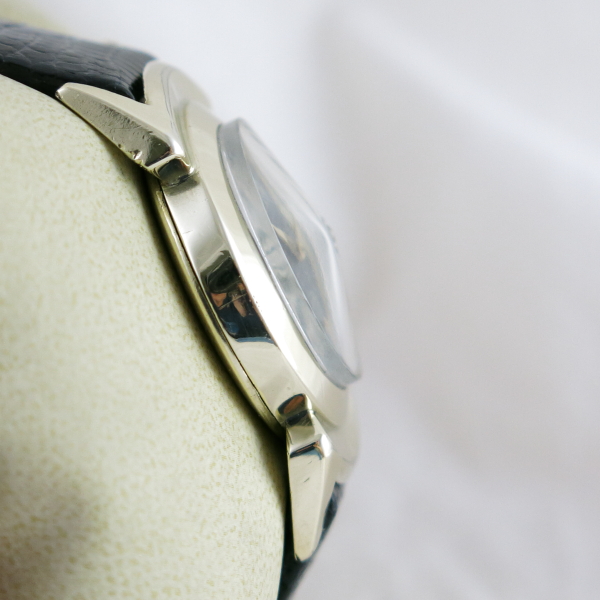