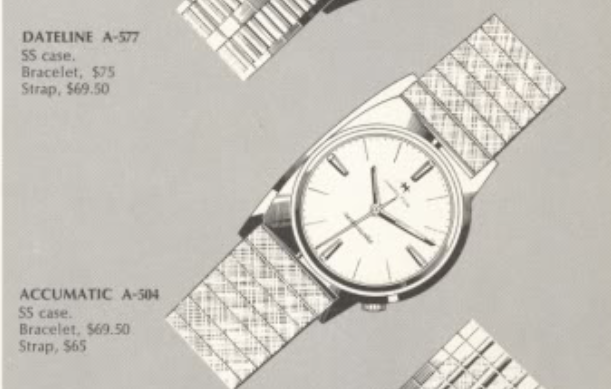 If the A-504 looks familiar it might be because it was based on another one-year-wonder, but from 1959 - the Electric Regulus.  In fact, the A-504 used left over Regulus cases but with one major caveat, as you'll see below. 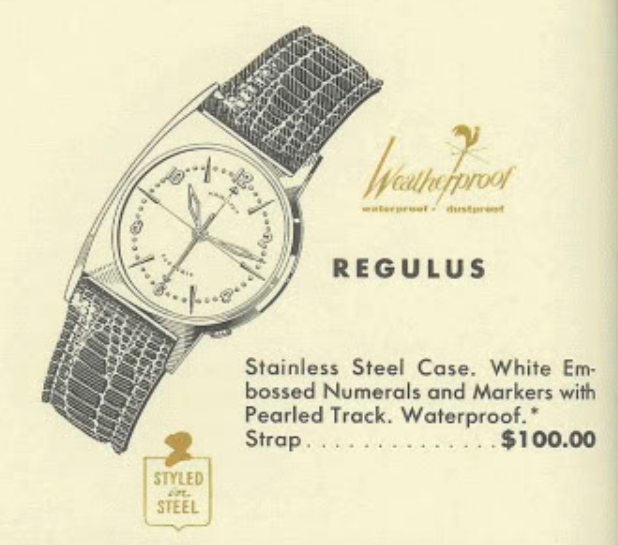 Being a 500-series watch, the A-504 came in a stainless steel case.  It's also featured a 17 jewel 689 movement inside.  That's an interesting fact as well - in that by 1965 the 689 had been replaced by the 689A movement so I suspect the A-504 was an "inventory eater" and was only made for a single year because it used up excess inventory on hand.  That's just a guess though.

My A-504 project watch came courtesy of a fellow collector and it was in serious need of help.  Obviously it needed a new crystal and a crown.  The dial has an odd water spot between the 1 and 2 hour marks.  The red-tipped second hand could be a replacement because it doesn't match the catalog depiction but it does look like a Regulus second hand so maybe it's original?  The minute hand seems to have a slight bend to the side too.  Hopefully I'll be able to straighten it out. 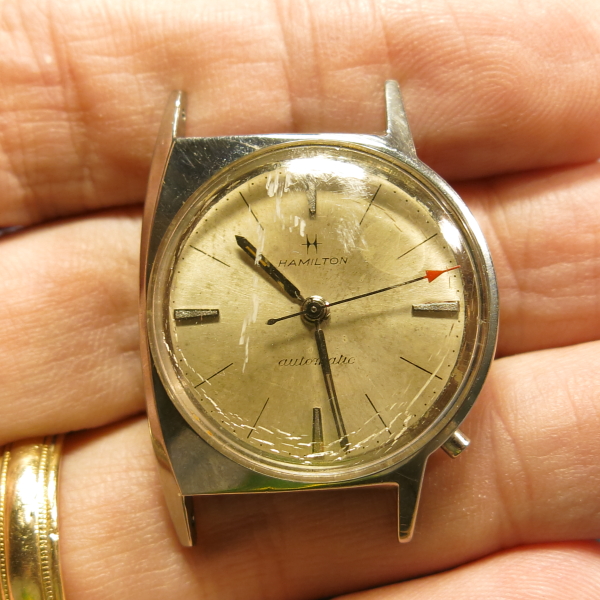 Notice the lip on the case back.  That leads me to believe this is a two piece case.  In fact, the Regulus  did have a two-piece case along with an odd D-shaped gasket to make it "waterproof".  However, by 1965 Hamilton decided that one-piece cases were more water proof so the A-504 case was soldered closed and cannot be opened. 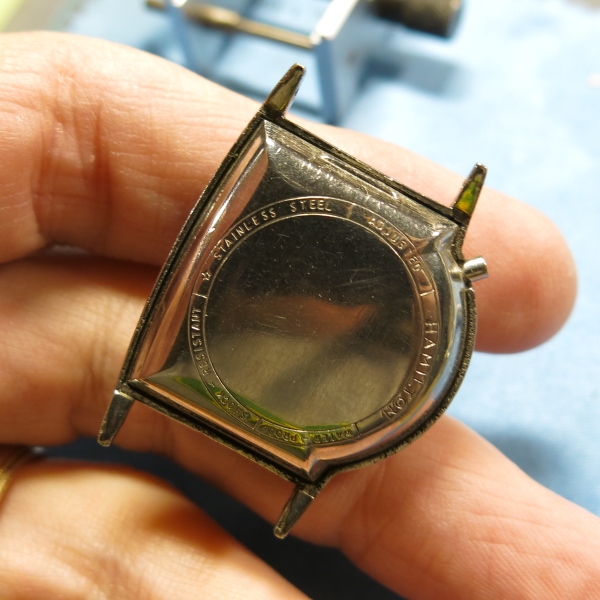 Based on the scratch marks on the case back, I don't think I am the first person to thing this to case should open but when I saw it didn't budge, I decided to trust my instincts and open it from the crystal. 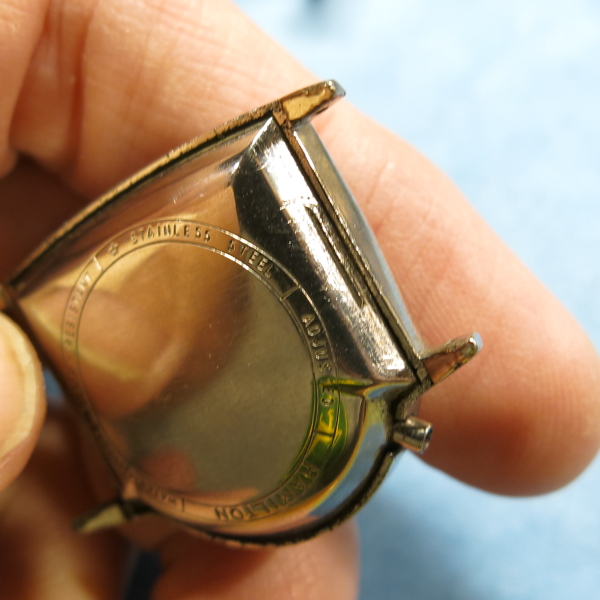 Sure enough, with the crystal out of the way, the movement lifts right out - especially since there's no crown holding it in place.  The 12, 3, 6 and 9 markers on the dial are textured - presumably to match the texture on what would have been on the original matching bracelet. 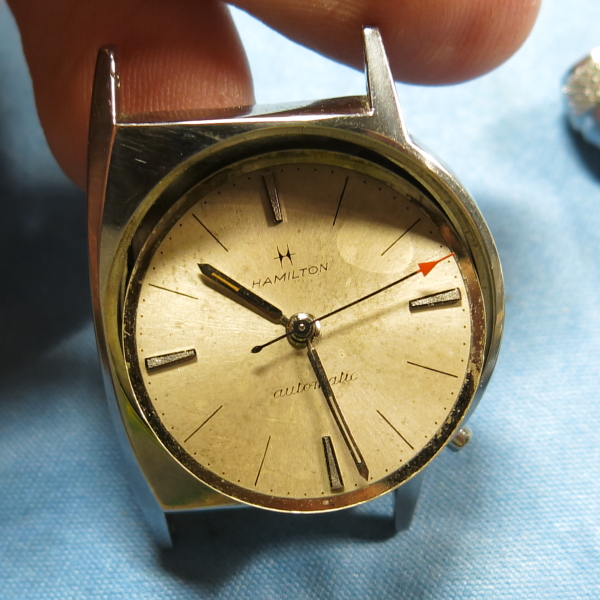 Here's a shot of the 689.  Other than a slightly different oscillating weight framework and kif shock jewels, it's identical to the 689A. 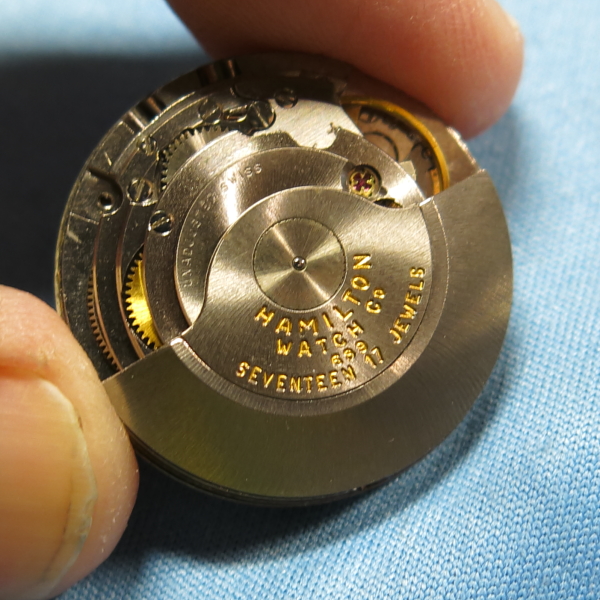 The inside of the case has a couple of previous watchmaker marks and it looks like the rotor has rubbed a little on the case back. 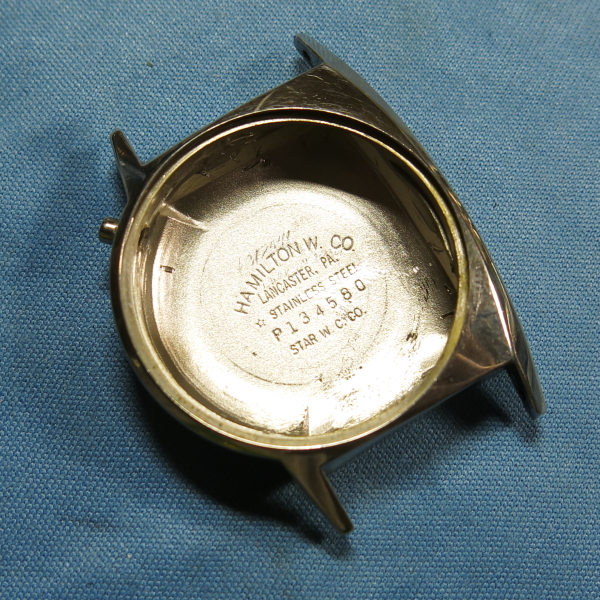 I don't see any signs of a stem in the movement - at least from the front.  However the set lever is still there - so that means the watch should be able to retain one when I replace it. 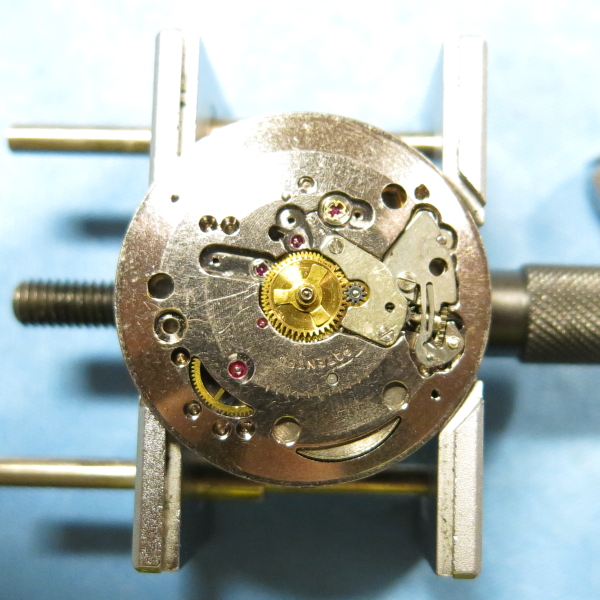 One of the dial foot screws is buggered up and cannot be turned.  I suspect a past watchmaker put the wrong screw in there and it got jammed in place.  The head on the dial foot screws is very small, relative to the bridge screws.  Fortunately it wasn't holding the dial so I was able to lift the dial off without issue.  Without that screw to secure the dial, the movement won't be properly supported - which is probably why the rotor was dragging on the case back.  There's no easy way to get this screw out so I'll replace the main plate instead.  I have a donor 689 so that's the easiest path to resolution. 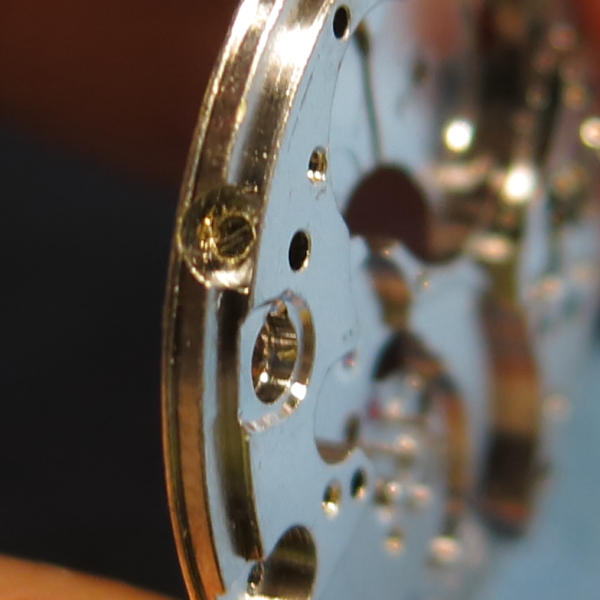 From the inside I can see the remnants of the stem.  It must have snapped off somewhere to the right of the winding pinion. 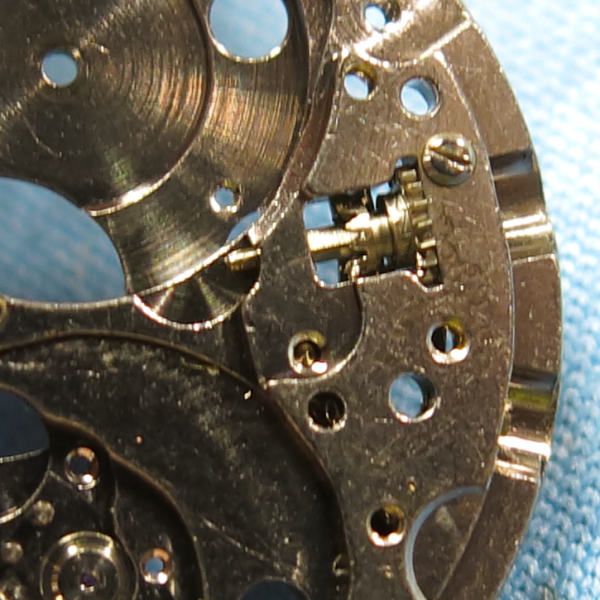 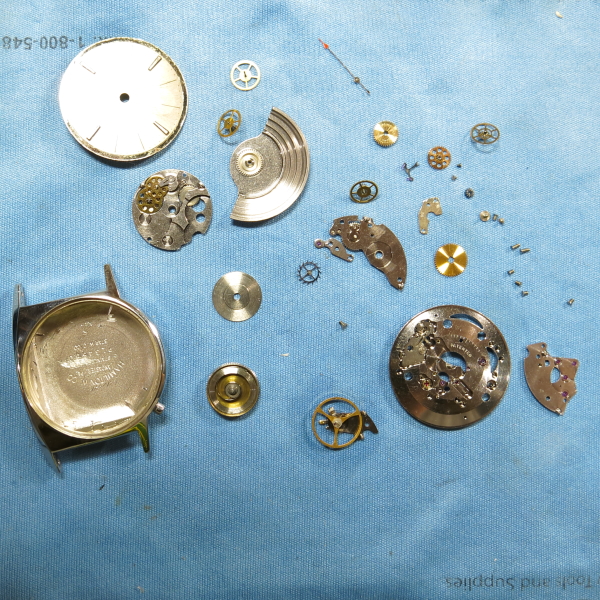 While everything is being reassembled I'll add new luminous paint to the hands. 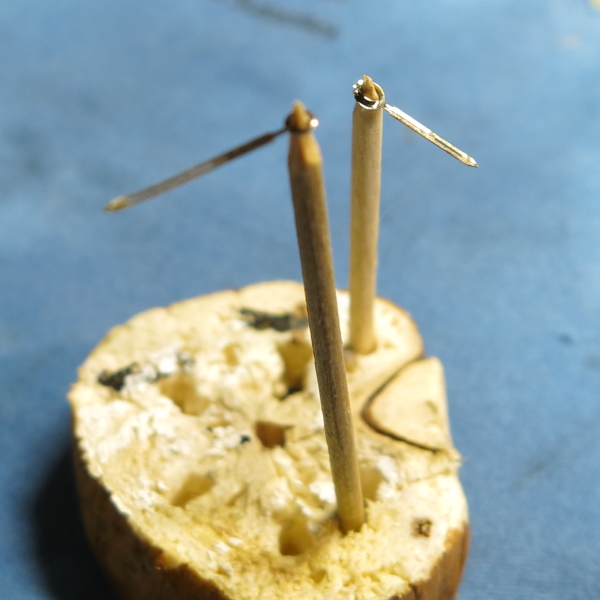 This movement has the option of a long or short female stem.  Since I don't know which one was originally used on this model, I'll try the long version.  You can see how much is missing in the shot below. 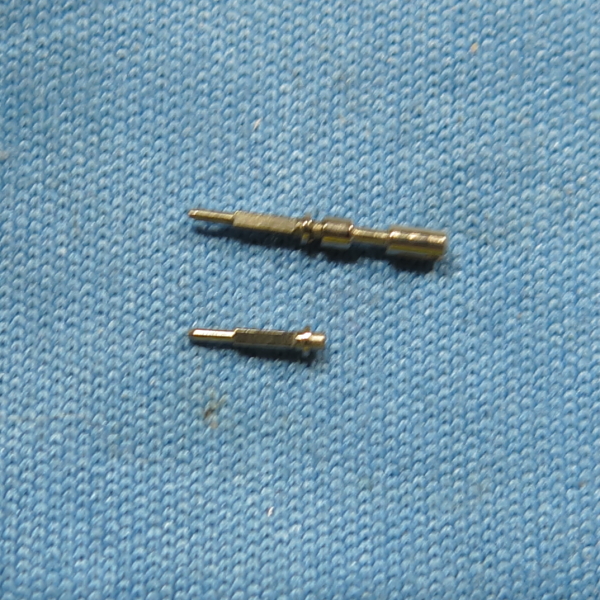 Notice the stamp on the main plate under where the balance will go.  This movement is also a calibre 63. 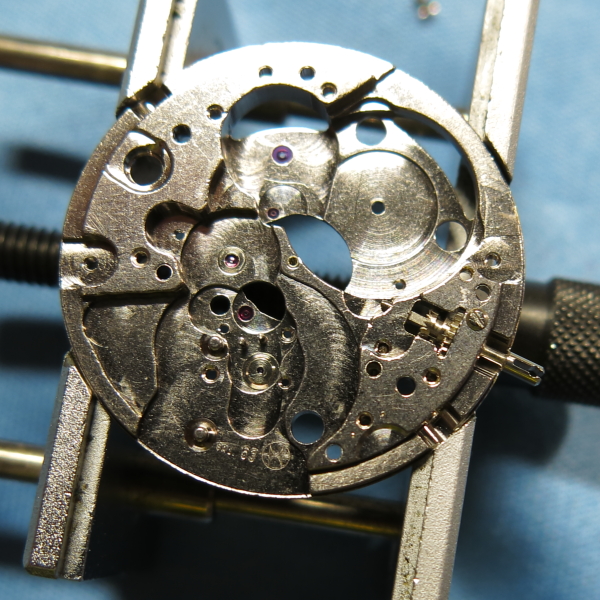 The basic movement is put back together and is ticking away with good motion. 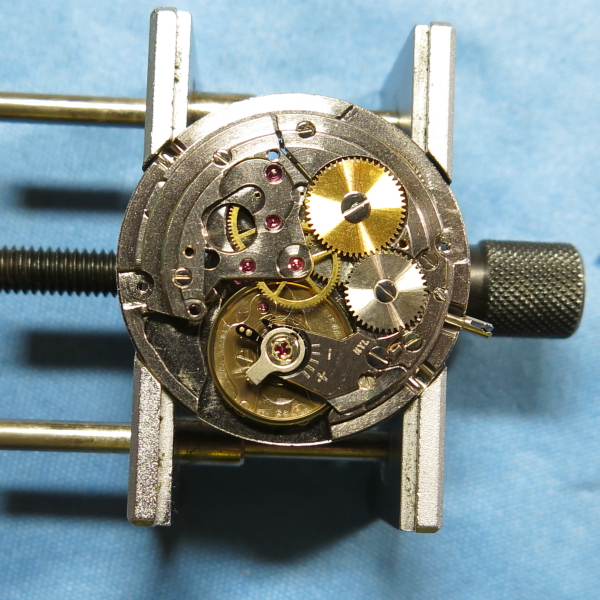 Not too shabby performance but I can reduce the beat error a little further. 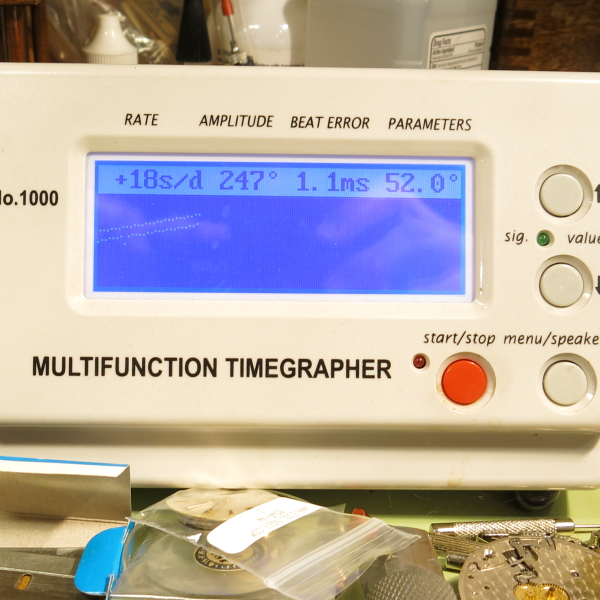 There, that's pretty much right on the money now.  It will slow a little as it settles in. 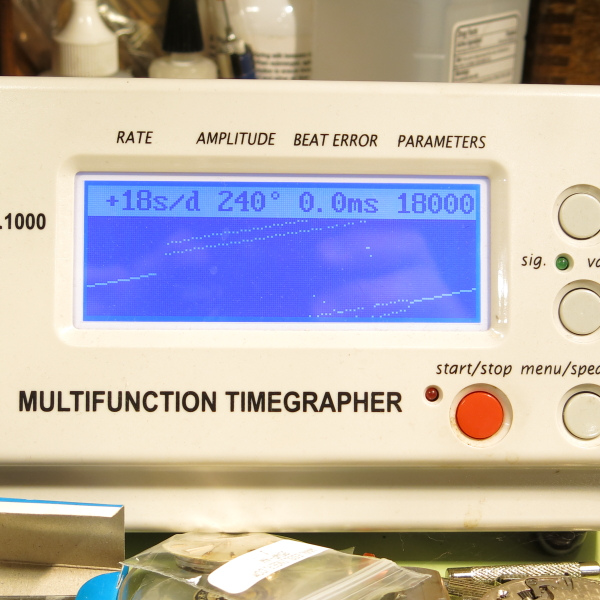 The stem tube on the case is a little larger than I typically see and will require a crown that will accommodate a stem tube diameter larger than 2mm. 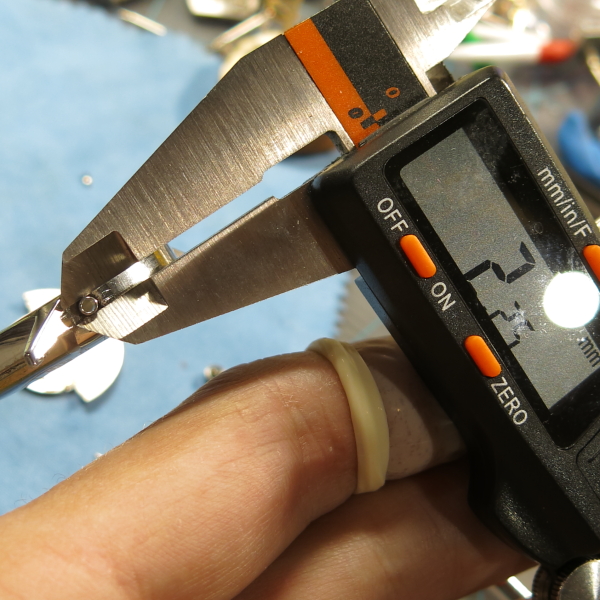 In addition to a new crown, I will also need the male portion of the stem called a "hub". 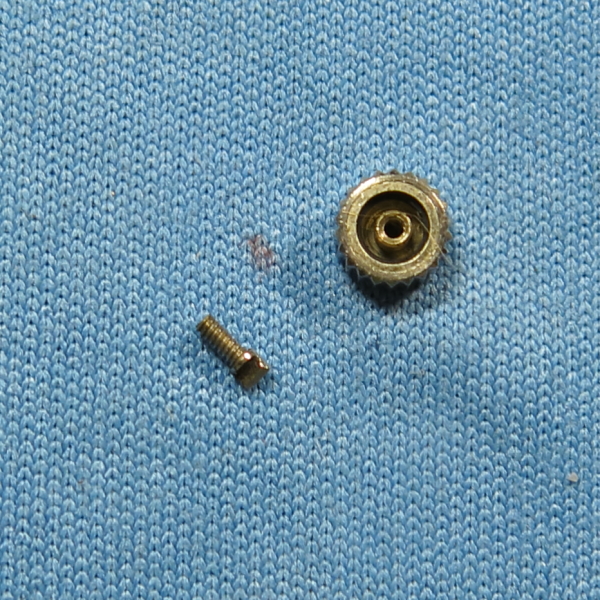 There's not much I can do about the dial - it is what it is unless the owner wants to get it refinished.  I did not try to clean it since the printing was already a bit faint.  However, with a new crystal, new crown and the hands straightened and relumed, this A-504 looks more than presentable.  This is a rare watch and very pricey when found "in the wild" so even with a so-so dial it would still be the "pride of the fleet" in anyone's collection. 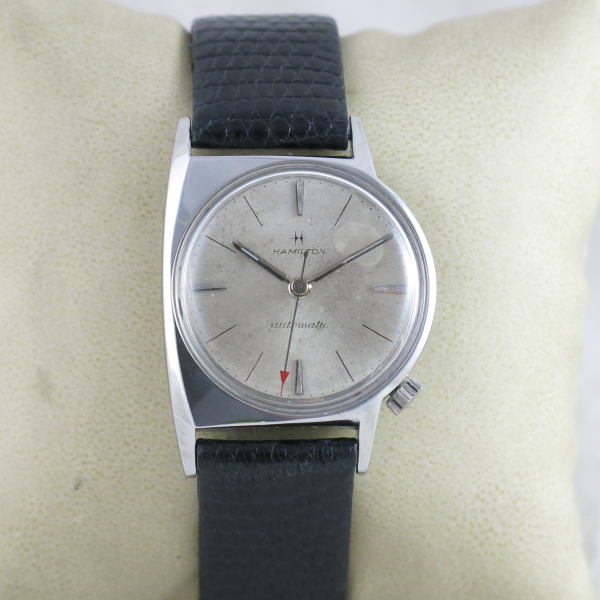