Which came first... the chicken or the egg?  I suppose a Hamilton corollary might be which came first, production models or awards models?

Typically I would have said regular production models came first.  The Awards Division seemed to create variants of regular production models that had been discontinued.  Organizations that purchased awards watches typically didn't want the recipients to find their award in their local jewelry store.  Awards Division watches are easy to spot because they often say "Masterpiece" on the dial.

A good example for consideration is the 1958 Courtney.  It was produced for three years and was shown in the catalogs from 1958 through 1961.  In February of 2016 I restored a Courtney with a presentation from 1969.  It was definitely an Awards Division watch, as it was engraved with a presentation and had "WE" on the dial, representing Western Electric. 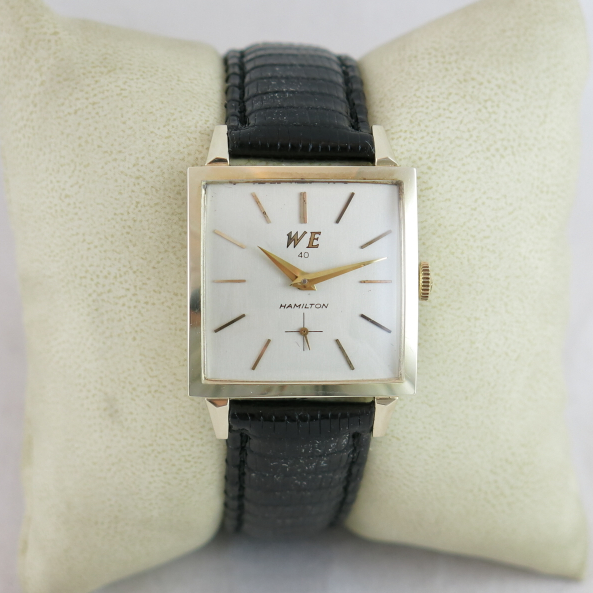 I recently had someone contact me about a very similar, but different, watch.  Check it out below... sure looks like a Courtney... doesn't it?  This one is a bit different though because it has a presentation from 1971 and it doesn't have a 770 movement inside.  Notice the second hand has fallen off.   It is floating around inside and is on the right between the 3 and 4 markers. 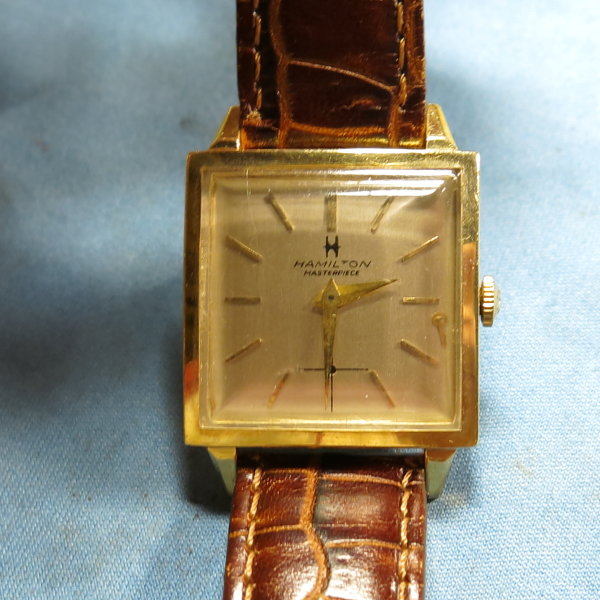 Looking closely at the catalogs, the first time this watch shows up is in 1974, identified as the Thinline 2053.  However the dial in the catalogs is a little different (and looks like a Courtney).  So how did my project watch come before a cataloged model?  Did the chicken come before the egg? 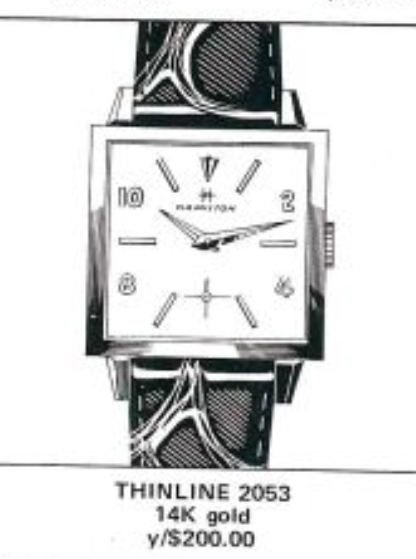 By Coincidence my project watch is also a Western Electric presentation with a classic Awards Division engraving.  Notice, however, the model number on the case back... 913470.  That would indicate that this is a 1970 model. 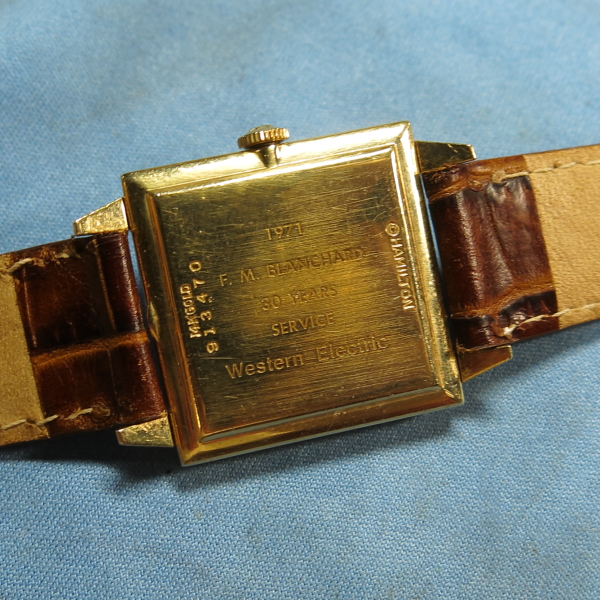 Looking at the inside of the case back, it's clearly not designed for a 12/0 size 770 movement.  There are three or four watch makers' marks inside so this watch has been fairly well taken care of. 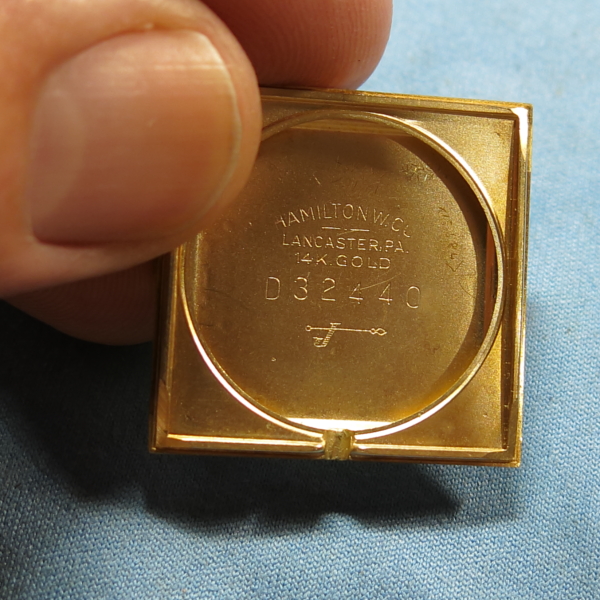 Under the dial is a 17 jewel Swiss-made 637 movement made by Buren.  By 1970 production of movements in the US was over and only Swiss-made grades were used in Hamilton models. 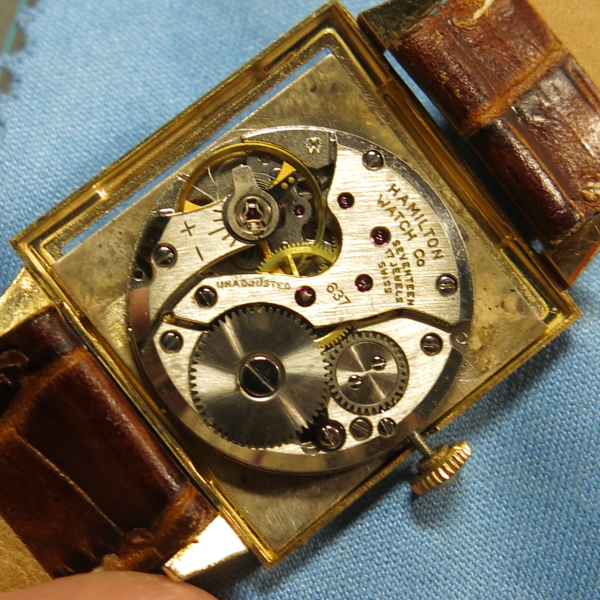 Taking a closer look at the dial you can see that it has clearly been refinished at some point.  First, check out the gloppy-looking H logo... that's clearly not original.  I wonder if this dial used to have a WE on it?  Also, there's a notch on the top of the dial above the 12 marker.  Notice also that the word SWISS is missing from under the 6 position.  Lastly, the cross hair for the second hand is clearly too large.  Those are all obvious signs of being refinished. 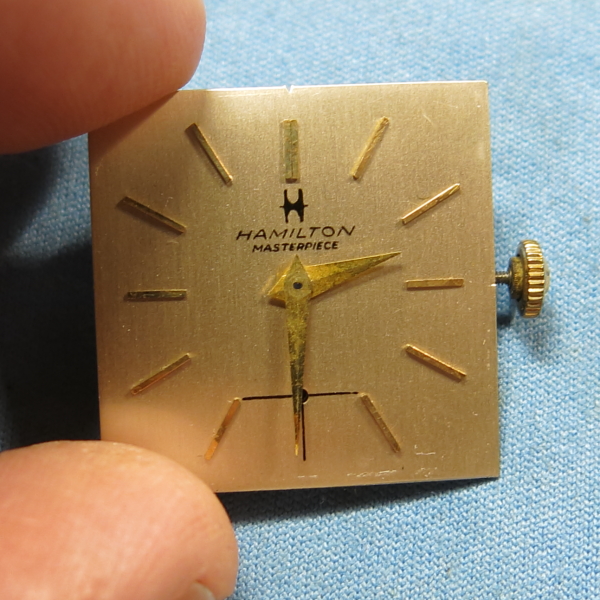 If that evidence wasn't enough to convince you, then looking at the back of the dial clearly shows scratched-in characters denoting the dial was refinished. 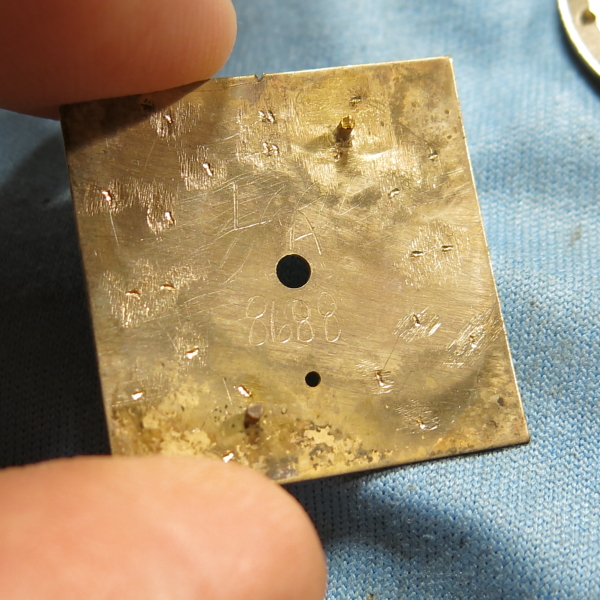 With the dial removed, I can see immediately that the set bridge has been broken.  The missing piece was not inside the watch so I'm left to assume that the last watchmaker to open this watch didn't bother replacing the part. 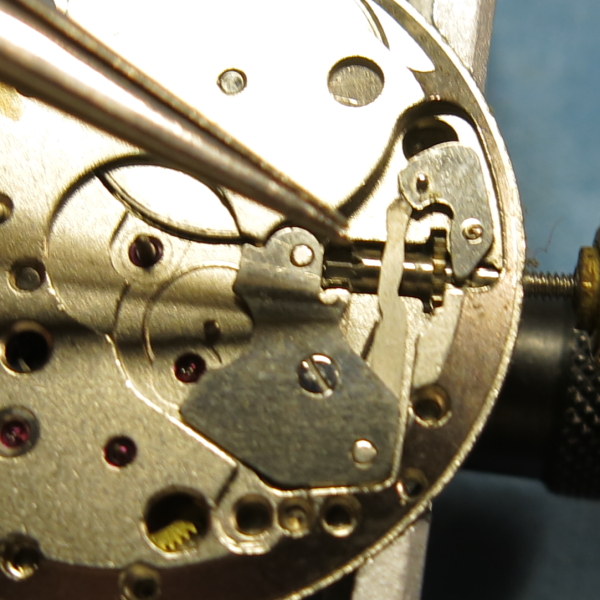 I happen to have a donor 637 movement.  As long as the set bridge is okay then I can simply substitute it. 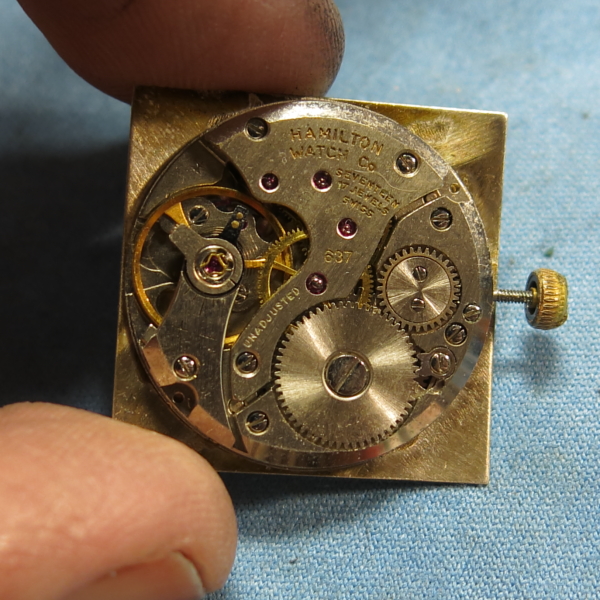 Talk about luck... check out the dial I found when I flipped the movement over.  Does it look familiar?  It's from a Thinline 2053!  It's also an Awards Division dial - as defined by the word "Masterpiece" under the Hamilton logo.  If you've got a great eye for detail you might spot it has a marker at the 6 position though - the catalog depiction doesn't show that. 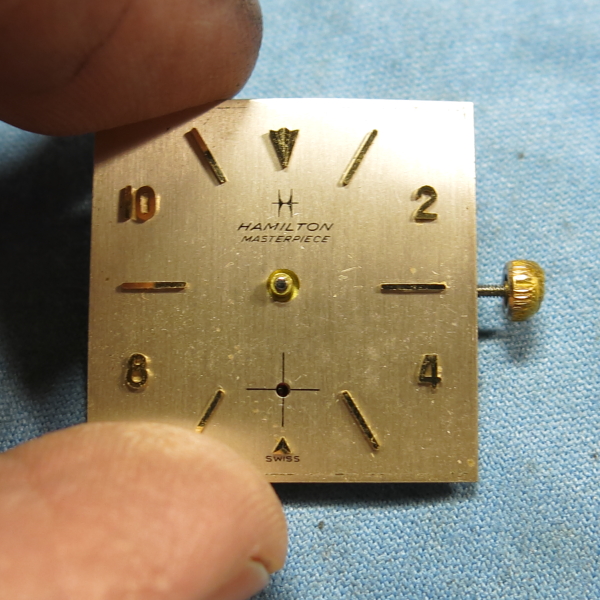 My luck continues - the set bridge on this movement is intact. 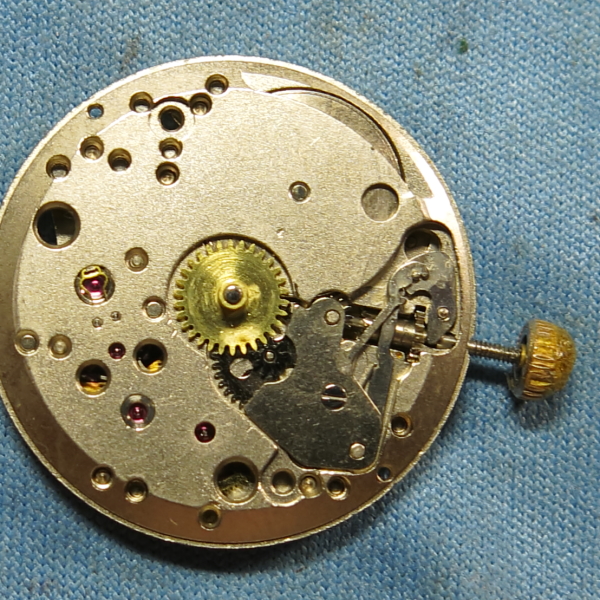 Now you can clearly see the difference between the donor and the broken bridge on the left.  The arm that sticks out holds the set lever in position. 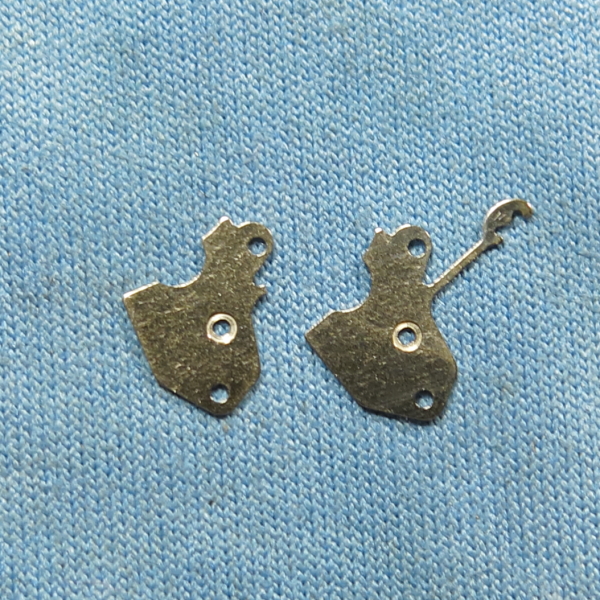 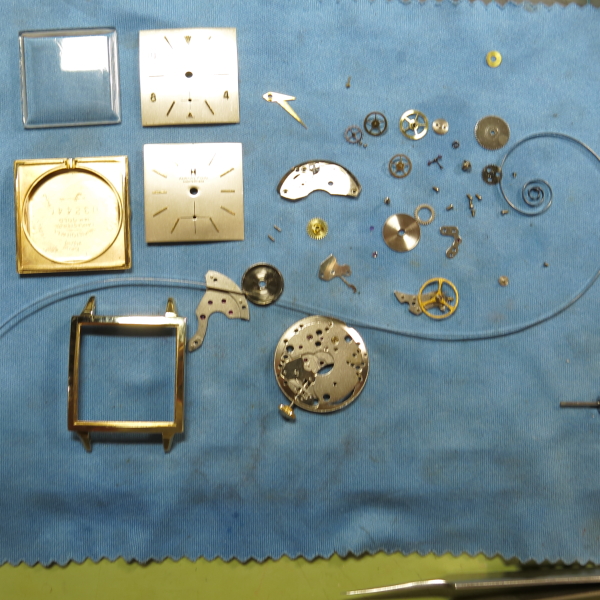 It took a bit of tweaking but I finally dialed in the beat rate and the beat error to very acceptable specs. 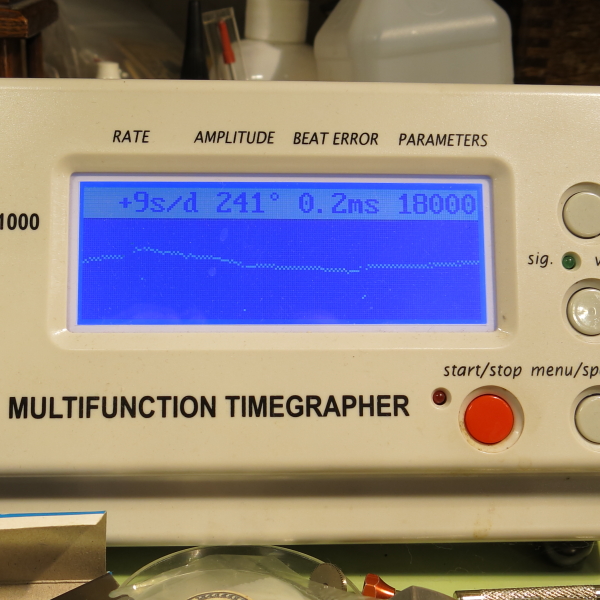 The second hand is an obvious replacement and is a bit too tight to go onto the 4th wheel bit.  I'll need to open the hole just a teensy bit and in order to that I'll need to use a very tiny broach. 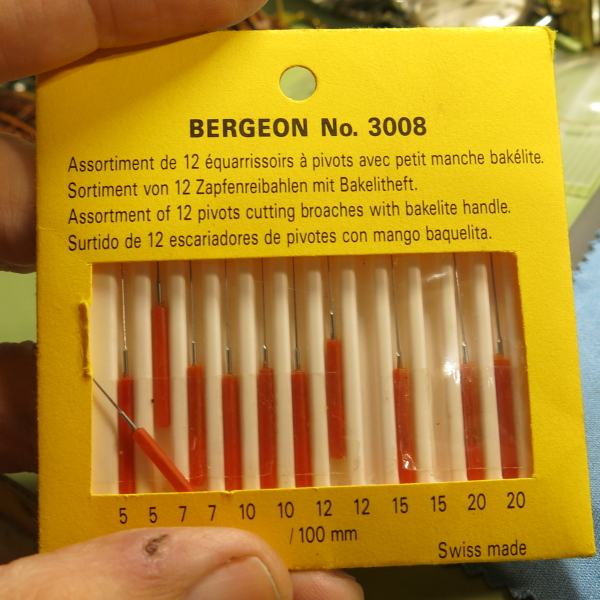 Since I happened to have the correct dial I decided to turn this awards watch back into a catalog-worthy Thinline 2053.  I didn't change the crystal on the watch yet.  The current one isn't quite correct but it'll do for now.  This is a sharp looking watch and from the outside it would be easy to confuse with the 1958 Courtney but it's actually a 1971 Thinline 2053.  Go figure. 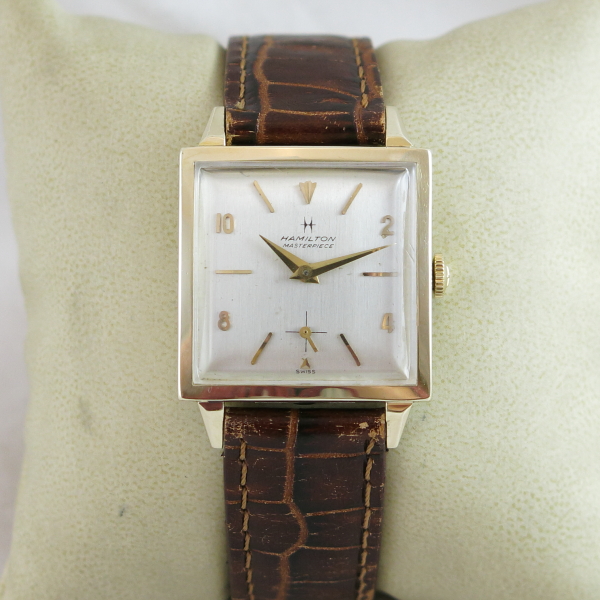 I purchased a new crystal for the Thinline 2053.  I believe it's the same as for the Courtney. 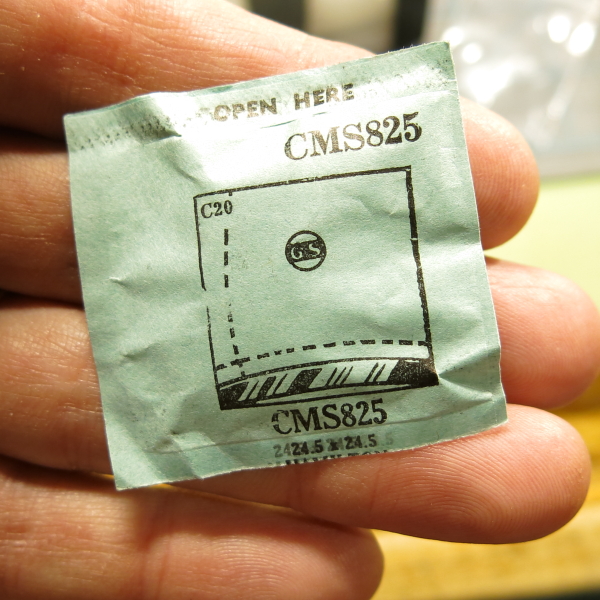 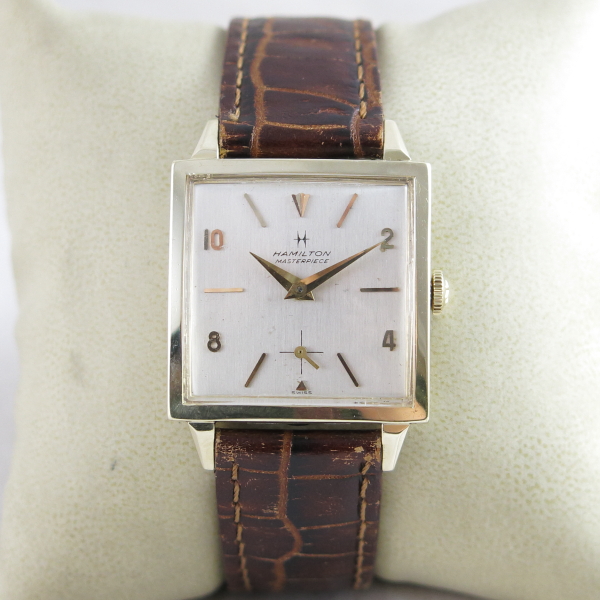