What would be the one bit of advice you'd give a collector if you could only offer them one bit of advice.  That's a tough question to answer since there is just so much one needs to learn when it comes to vintage Hamiltons and vintage watches in general.  I'm often asked if I work on other brands and although they occasionally sneak onto my work bench, I focus primarily on Hamiltons because that's the brand I know the most about (not to mention they're the best too... right?).

Anyway, the one bit of advice I would offer anyone is to first buy the seller, then buy the watch.  That pearl of wisdom really only applies to buying expensive watches and, especially, watches that are represented as being "serviced" and "all original".   If you're new to the hobby and you're not absolutely sure the seller knows their stuff then you should assume they don't and proceed accordingly. 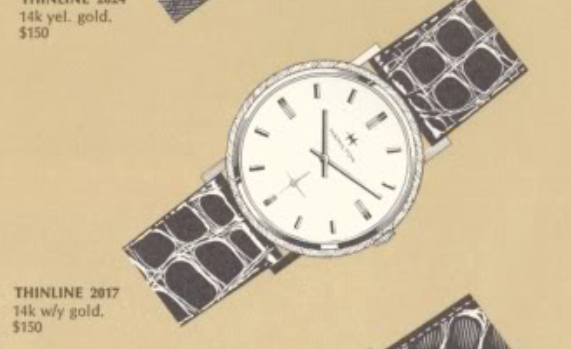 The Thinline 2017 came in either a solid 14K yellow or white gold case.  Tucked inside is a 17 jewel 687 movement.  As part of the Thinline series, the 2017 is a very sleek and elegant looking model and the bezel is partly engraved with a florentine finish and partly bright - so it has a lot of sparkly interest.

I recently purchased a Thinline 2017 and since it's solid gold it didn't come cheap.  It seemed to be in  decent shape though.  The seller had less than 80 feedbacks and their percentage was 97% positive.  That should make anyone's spider senses tingle.  The listing also didn't have a movement shot.

The 14K and the 33mm diameter part of that description is correct but the rest is debatable.  First off... I didn't know watches were made in a mint.  I thought they were made in a factory.  What exactly is "mint condition" and how do you know when you're "near" it?  If you can't be clear about that, should I even ask what "serviced" means?

I've bought a lot of "serviced" watches that were anything but serviced so now I assume every watch I buy needs to be overhauled.  I've met too many people that think adding oil to a dirty watch implies "serviced".  That's like putting on extra deodorant and calling yourself clean.  You may smell pretty but the dirt is still there.

As received the watch looks to be okay.  However, the first thing I noticed is the second hand is rubbing the dial and has left a ring where the tip has dragged.  The seller's photos lacked that detail.  The case looks okay but is it mint-like? 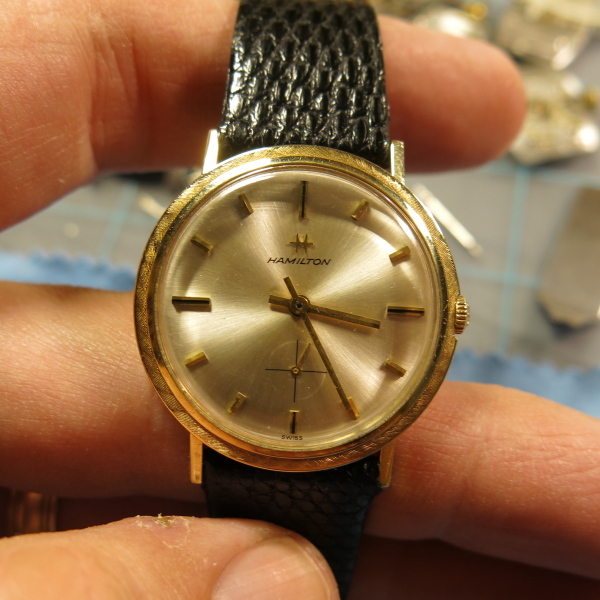 The back of the watch is unremarkable... but that's a good thing, in my opinion.  I wouldn't expect to see anything too interesting back here. 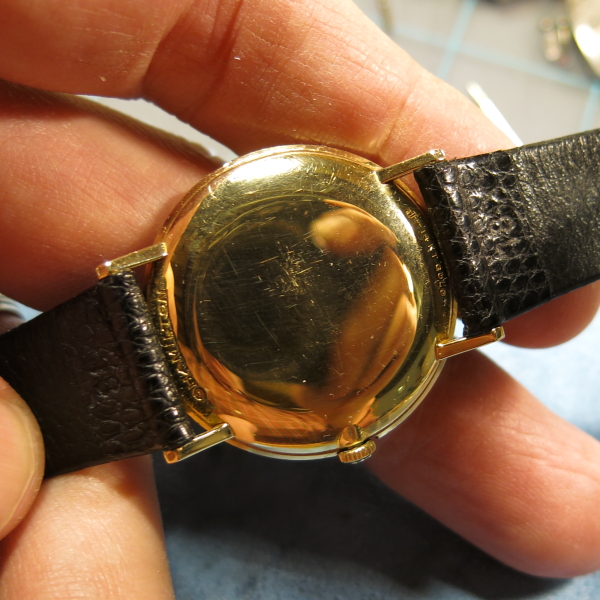 I thought for sure this watch was going to open through the crystal but when I lifted the crystal the dial wouldn't budge.  So I quickly realized it has a two piece case and the bezel pops off. 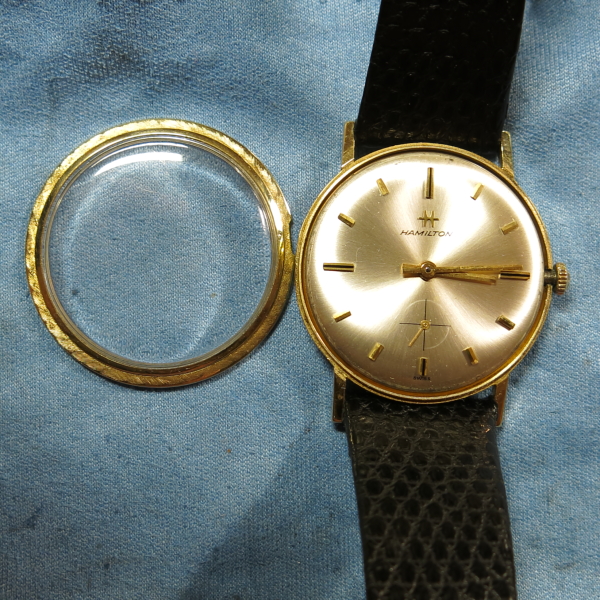 Check this out... the lower of the two numbers inside the case back ends with 64.  That would imply this watch was introduced in 1964 but didn't make the catalogs until 1966.  The number starting with a C is unique to this specific watch.  Somewhere out there is a number ending with 443 and a 445 case - unless they have been scrapped. 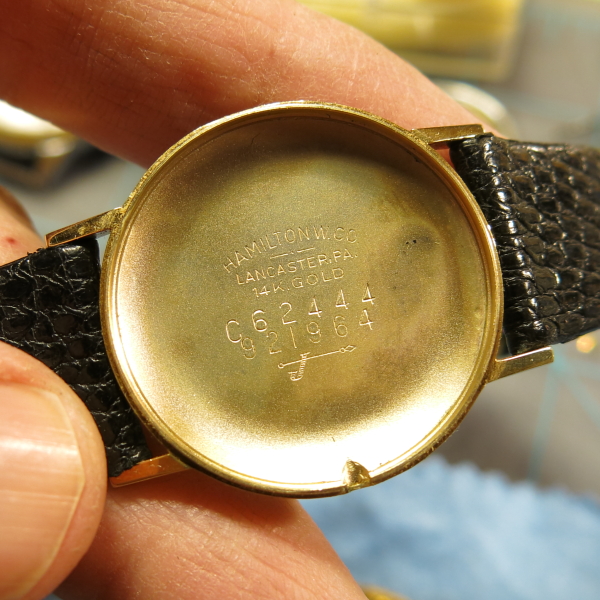 I think it's sometimes hard to tell if a movement is recently serviced.  Looking at the case back I don't see any marks but there was a faint mark ending with a 92 that the camera didn't pick up.  Does that mean 1992?

Looking at the movement below, it's not "dirty" but I do see what appears to be some finger prints or dust marks on the bridges.  Hard to say for sure if I'd call that clean. 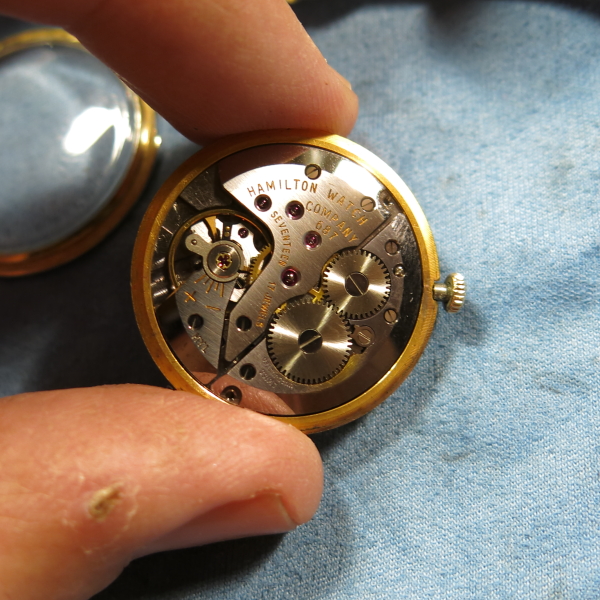 The dial side of the main plate doesn't look freshly serviced to me... does it look that way to you?  I would expect the hour wheel, dial washer and the minute wheel to look brighter than they do.  The area by the barrel looks almost a little rusty.  I don't see any lubrication around the set lever or set bridge. 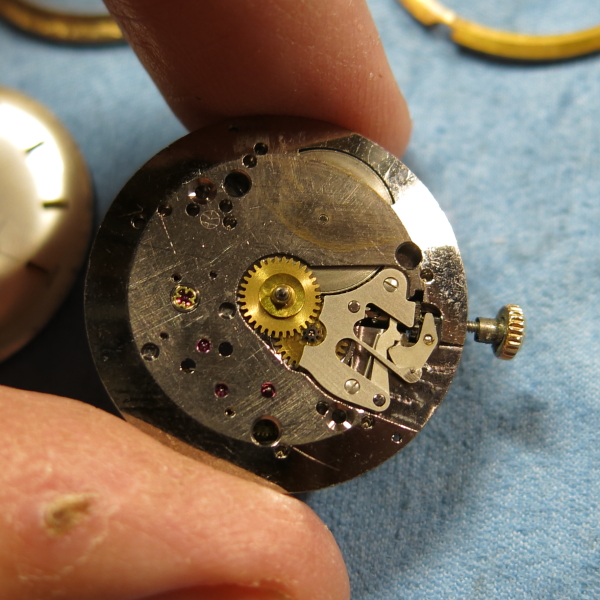 I do see some grime under the ratchet wheel so even though the shot is a little blurry this movement is starting to peg my Bull Shit-meter. 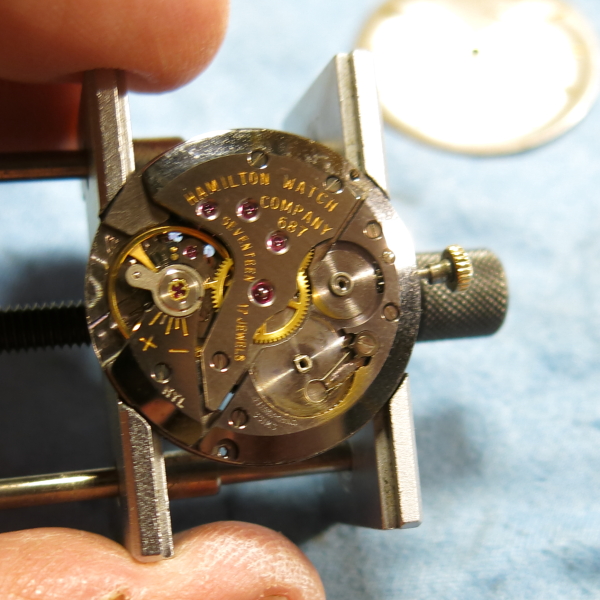 This mainspring and barrel has obviously not been cleaned any time recently.  You can compare it with the shot below to see for yourself. 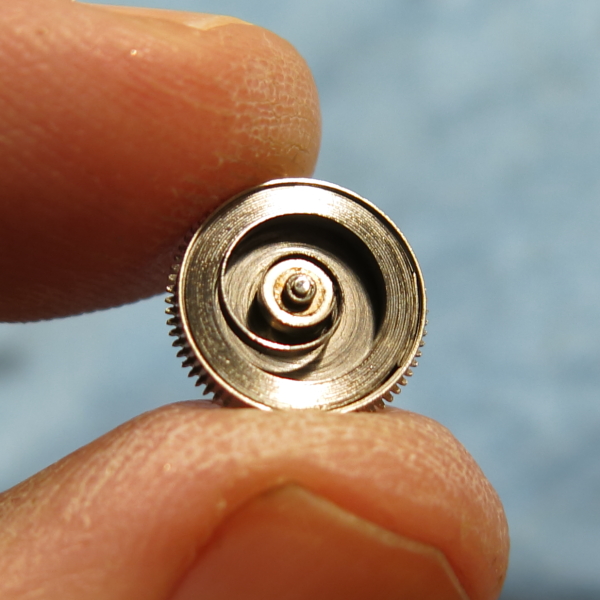 I would expect a "serviced" watch to not have scratches on the crystal - wouldn't you? 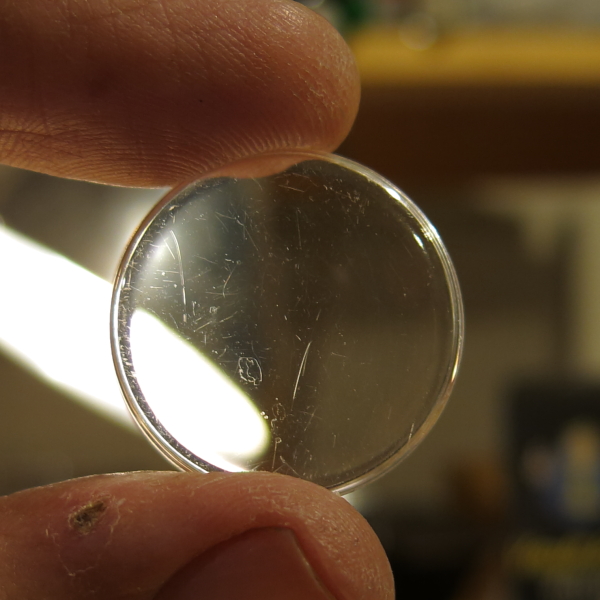 Everything is fully disassembled and thoroughly cleaned. 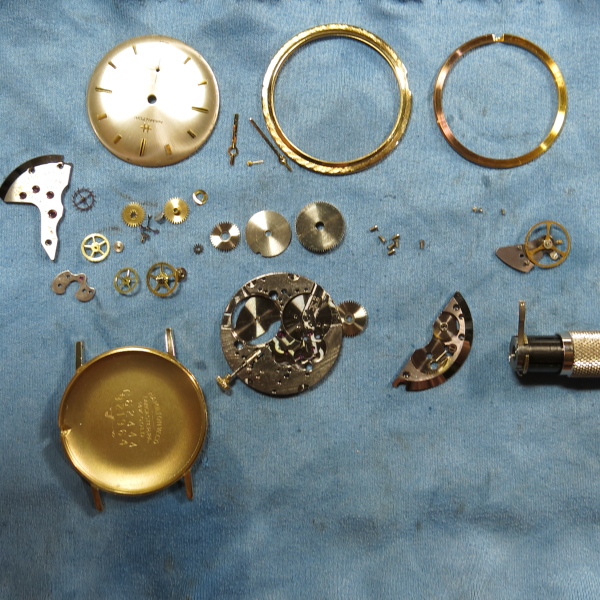 The mainspring is reinstalled and will get a nice dollop of clean grease after I reinstall the arbor in the center.  Then I'll close it up tight with the cover. 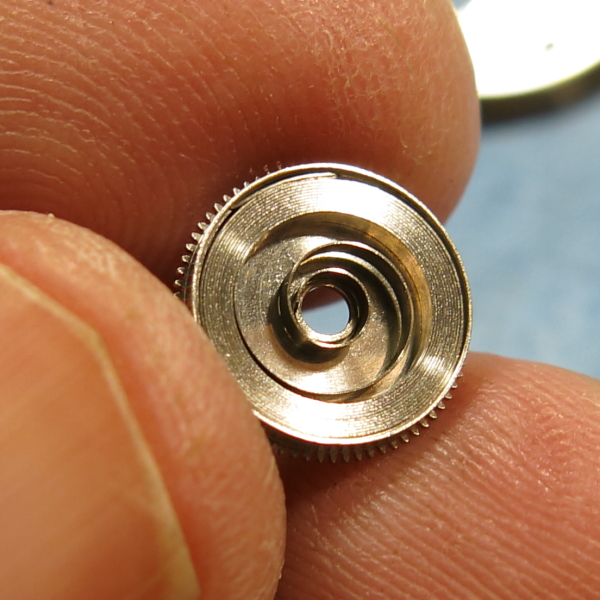 This is what a "freshly serviced" movement should look like... everything is bright and shiny. 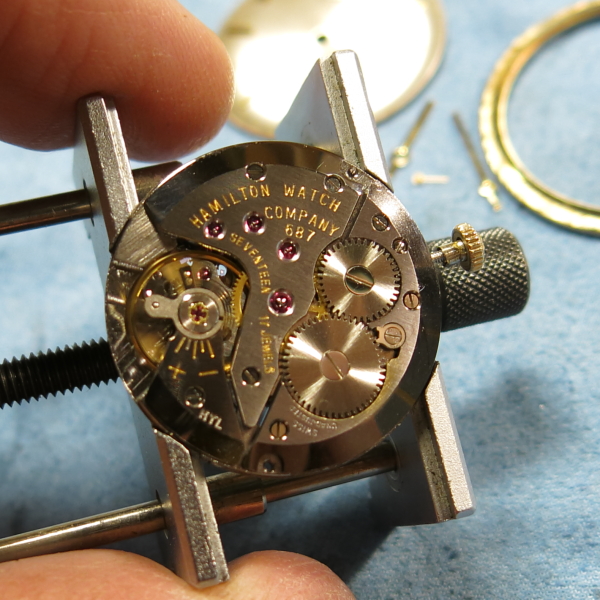 Well, the balance is out of beat but that's easy to correct. A tweak here and a tweak there... eventually the beat error is reduced to zero. 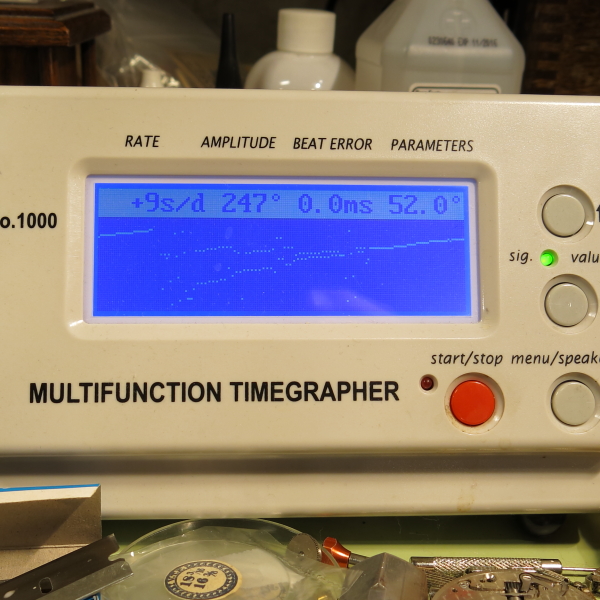 Although I could have polished the original crystal to remove the scratches, I thought it was a little loose so I elected to install a slightly larger (and tighter) low profile crystal.  28.2mm vs the 27.9 that was in it. 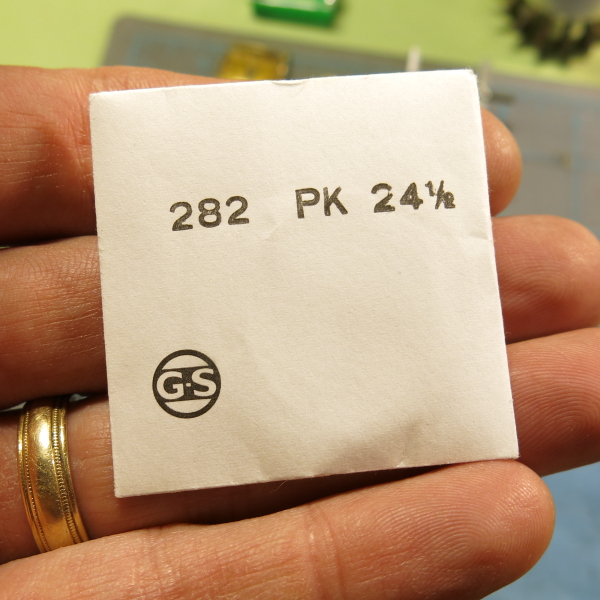 The finished watch now looks and runs like it left the factory... or the watch mint, as some believe.  The circular mark on the dial caused by the second hand is still there but it's not as pronounced.  This is a fine looking watch and a new black lizard strap complements the black in the hour markers very nicely. 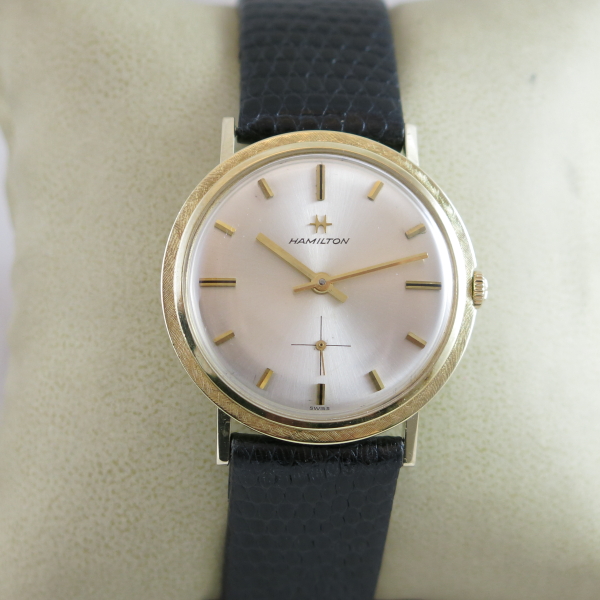 It's possible the original seller though the watch was serviced.  Maybe they "know a guy" or brought it to a jeweler who "serviced it"?  I wouldn't presume to say.  That's why my advice to anyone spending "good money" on a serviced watch would be to first make sure you believe who you're buying from knows their stuff and then make sure you know what you're buying from them.
Posted by HandyDan at 6:18 PM