I don't think it's fair to view the Illinois line up as "less than" the Hamilton watches - after all, within a few short years many Hamilton models would end up using the same Swiss-made movements.  I think the Illinois experiment was a "putting a toe in the water" and seeing if the market would tolerate Hamilton incorporating Ébauche movements into their product line.  I guess all hell didn't break loose so they ended the experiment and jumped all the way in.

It would be unfair to compare the 1950's Illinois watches with the pre-1930 Illinois models - as they are similar in name only.  Pre-1930 Illinois watches were excellent time pieces - although they lack the advances that came in the 1930's like Elinvar hairsprings.  Illinois watches have a very loyal following but I personally find them to be a bit temperamental - as are all pre-1930 movements - and unless they were well maintained or not used at all, they often are near the end of their expected service life.

A good example of the former is the 1953 Automatic Model A.  It would be produced for two years. If the design of the Automatic A looks familiar it may be because the case looks very similar to the 1953 Rodney.  The Illinois models were also the first to introduce shock jeweled balances too.  The Automatic A came in a 10K gold filled case.

I recently purchased an Automatic A, mainly because it has a new movement that I haven't worked on before.  I'll show you that in a bit.  In the meantime the project watch appears to work sporadically and the second hand seems to stop near the minute hand.  I passed it through the demagnetizer and that seemed to correct the issue. 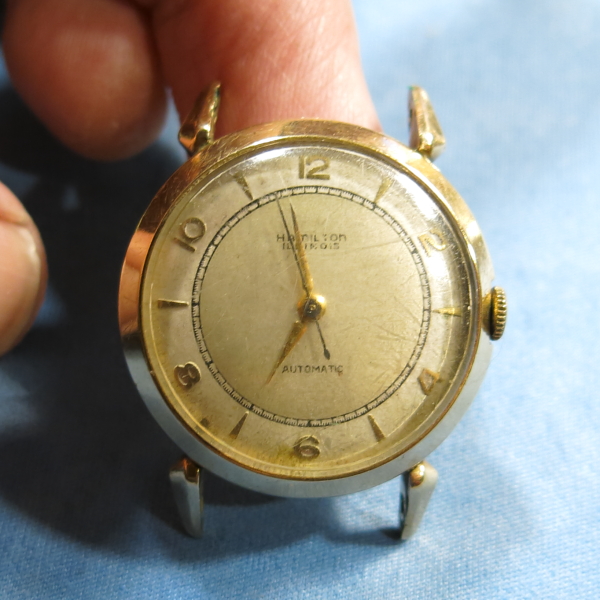 From this angle the watch looks just like a Rodney.  However it's stamped ILLINOIS 9505 on the back. 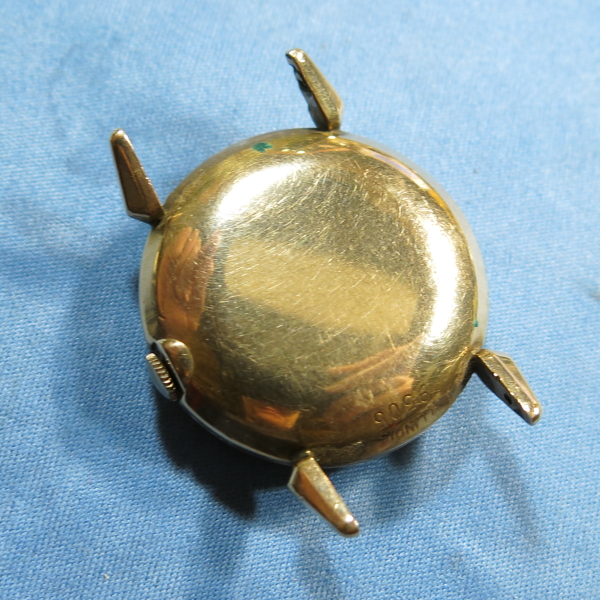 The bezel and crystal pop off like a Rodney to reveal the two-toned embossed dial.  The second hand is silver but the hands are yellow.  I'm not sure if this is an original detail or if the hand is a replacement.  I think it's a little hard to see against the silver butler finish of the dial's center but it's the correct length so I'll leave it for now. 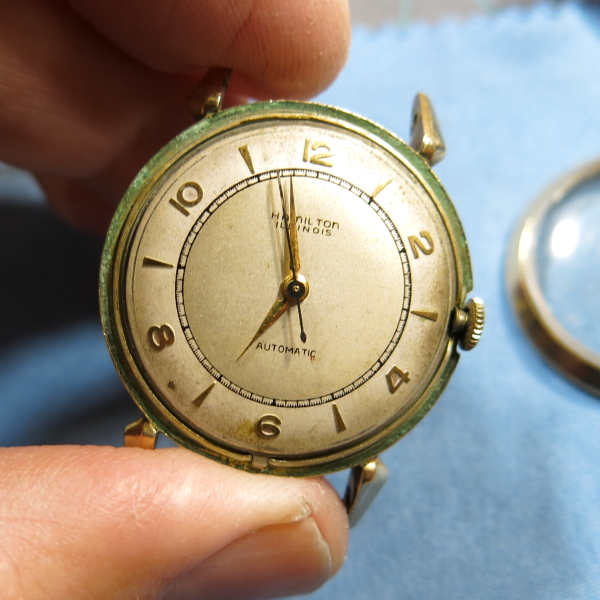 Here's a shot of the movement inside. This is an Eterna 1248 and it was also used in the earliest Hamilton automatics that would be introduced in 1954.  Its the only Hamilton-branded movement without a caliber number.  The same is true on the Illinois version - there is no unique Illinois ID but it does have a movement serial number.  Eterna movements are known for their five ball bearings in the center race of the oscillating weight.  If you check out the Eterna logo it's five round circles - a nod to this design feature. 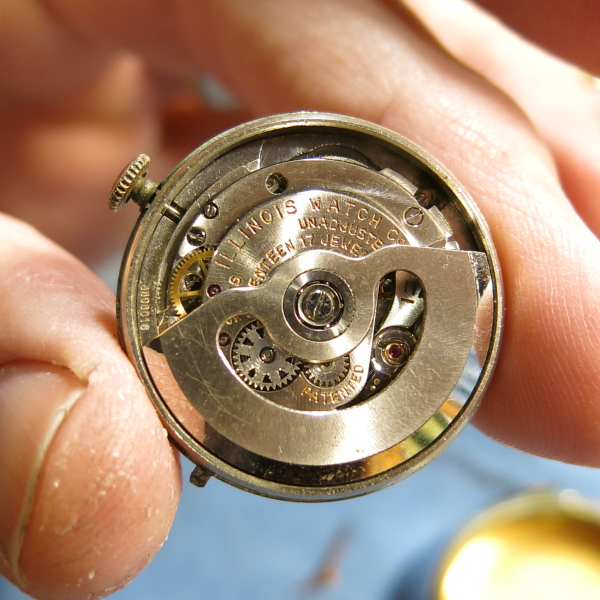 Oops!  I accidentally broke the stem while trying to get the movement ring off.  Oh well, it happens. 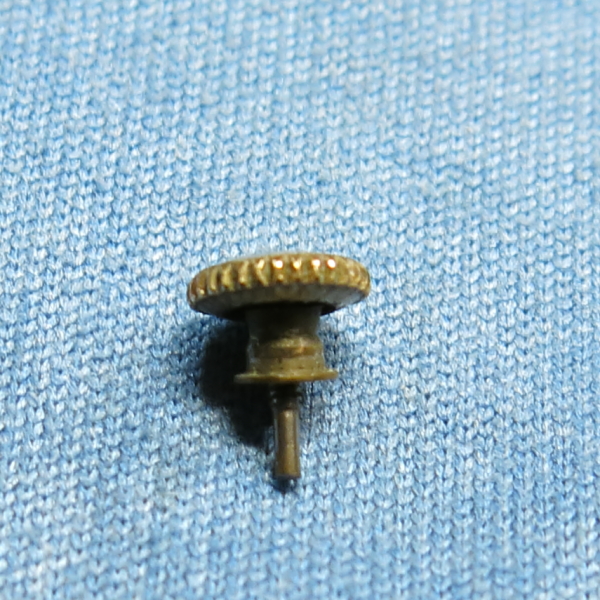 From the front, the movement looks a lot like an ETA movement.  In fact, ETA was a subsidiary of Eterna.  Eterna first introduced automatic movements in 1938... long before Hamilton got on board. 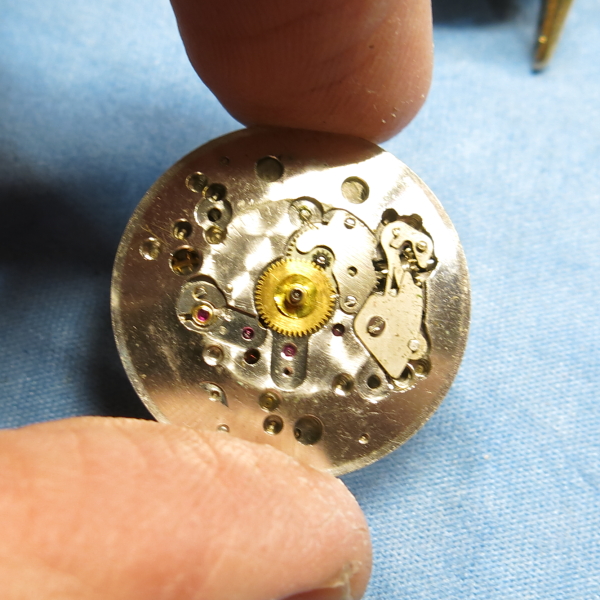 One screw holds the oscillating weight / rotor in place and once it's out of the way this movement is starting to look a lot like an ETA 1256 and what would eventually be the Hamilton 672 automatic used in the first Accumatic models.  Notice the TXD stamp on the balance cock.  That's the import code for Illinois and all Illinois-branded movement have this code just like the Hamilton grades have HYL on the balance cock. 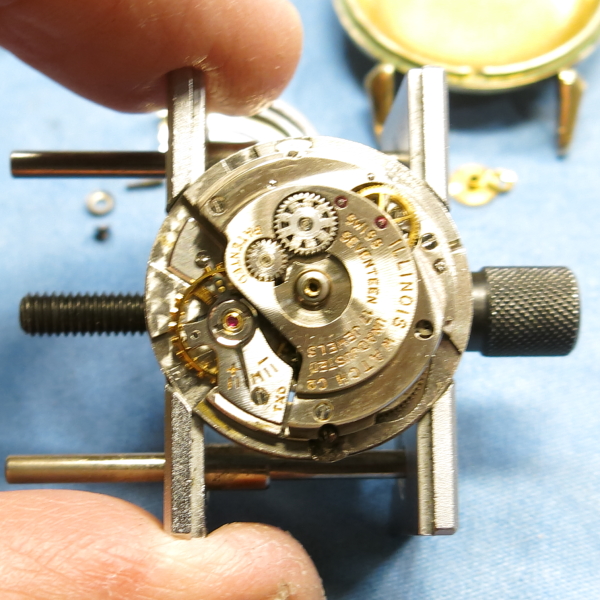 The similarities to the 672 continue with the rotor framework out of the way. 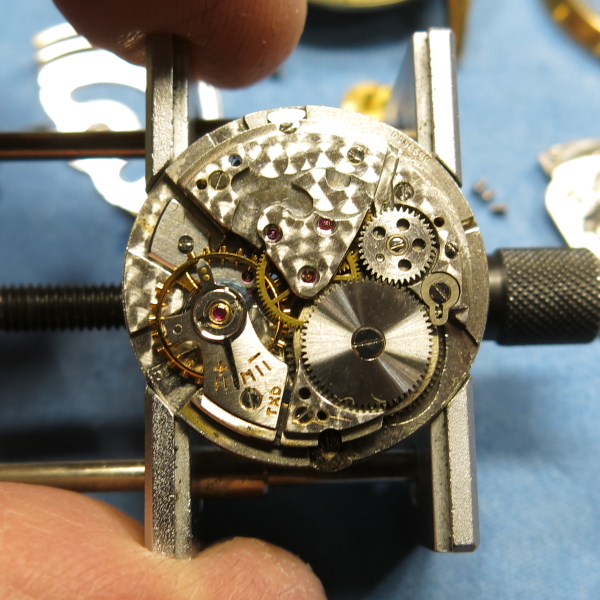 Removing the barrel bridge and train bridge reveal the escape wheel and the bridge that supports the center wheel.  I'll need to take the pallet fork off in order to get the center wheel out. 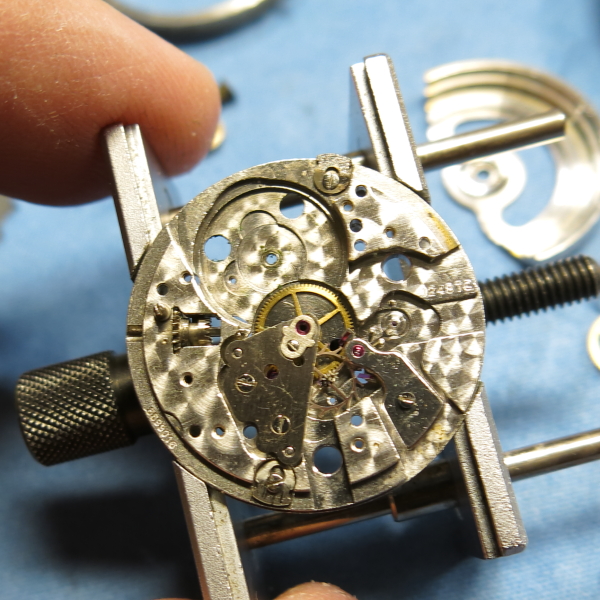 The main plate is stamped 1248TC.  That's the info you would need to order replacement parts, like a stem, if needed. 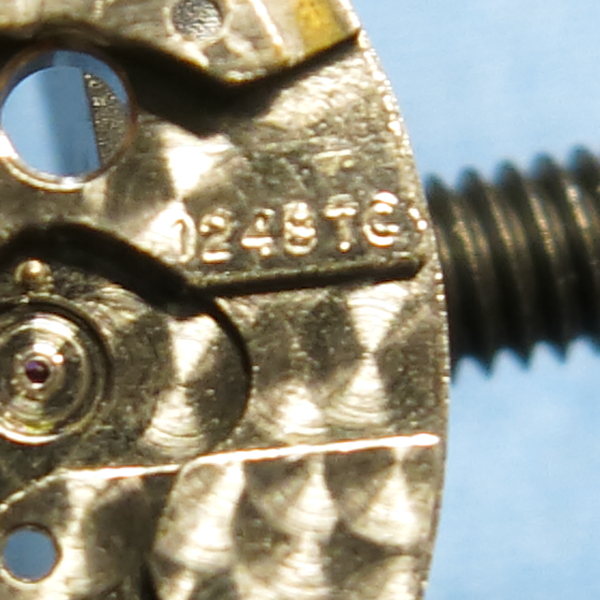 Everything is taken apart and cleaned.  It looks a lot shinier now that it's been through a trip to the spa. 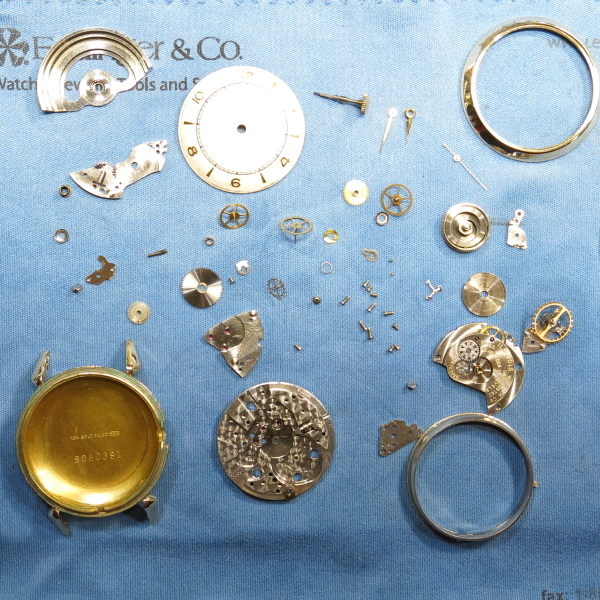 It turns out an ETA 1256 stem fits fine.  So my stem-problem is solved. 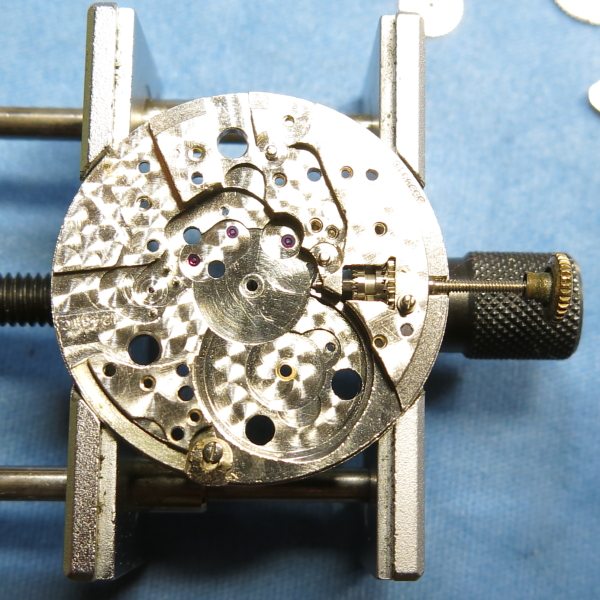 The main parts of the watch are reassembled and the watch is ticking away with good motion.  Off to the timer to see what it thinks. 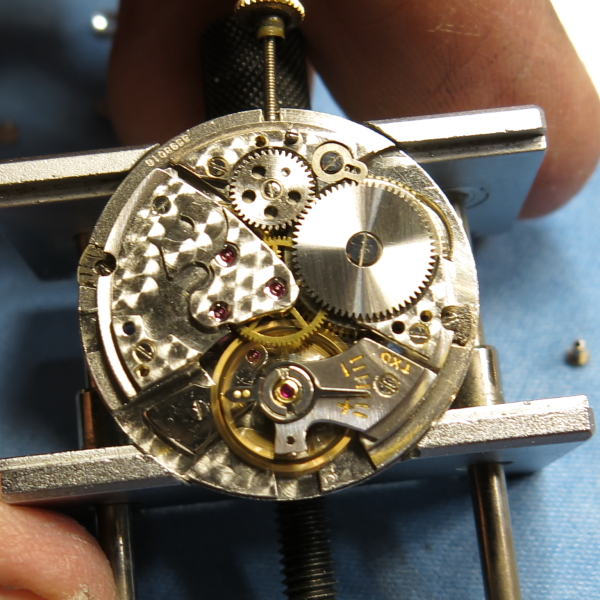 Hmm... the beat error of 6.8ms is a bit out of spec.  It's not easily adjusted but I can't leave it here without feeling a bit guilty. 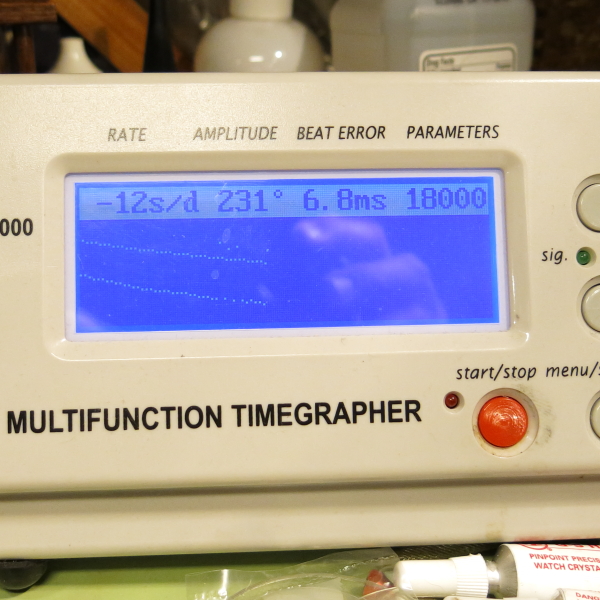 Adjusting the beat error requires removing the balance from the balance cock and then rotating the center hairspring collet in the right direction to the right amount - otherwise it has to be redone... again and again until it's where it needs to be. 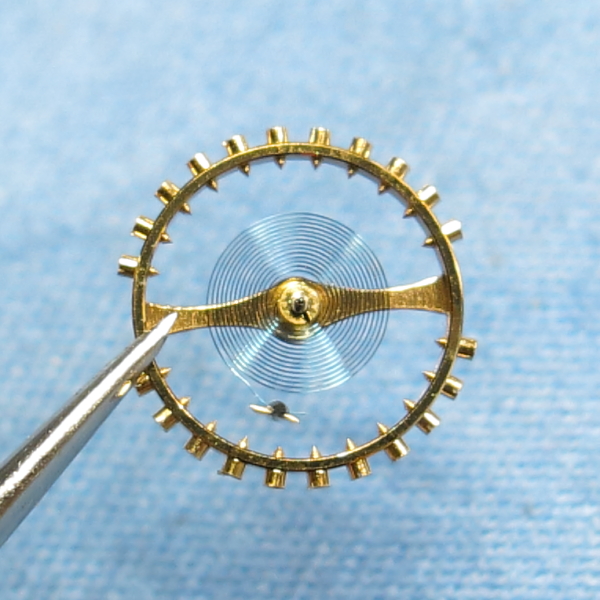 Phew!  Got it right the first time.  Now things are looking great. 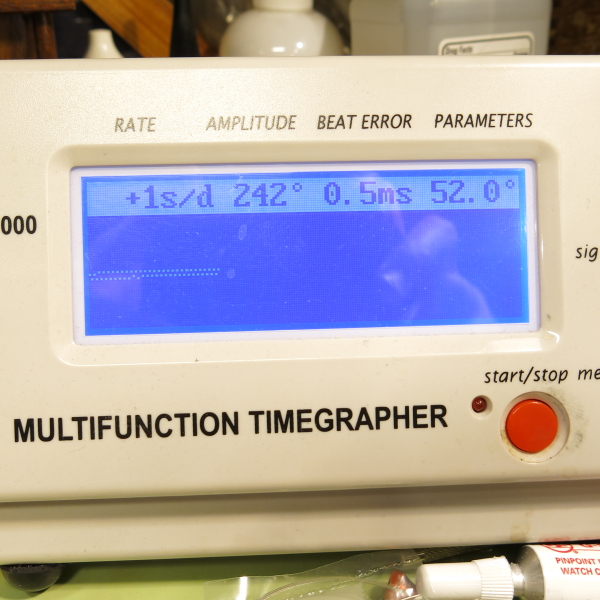 Putting the rotor and frame work back on is a piece of cake compared to adjusting the beat error.  I'm in the home stretch now. 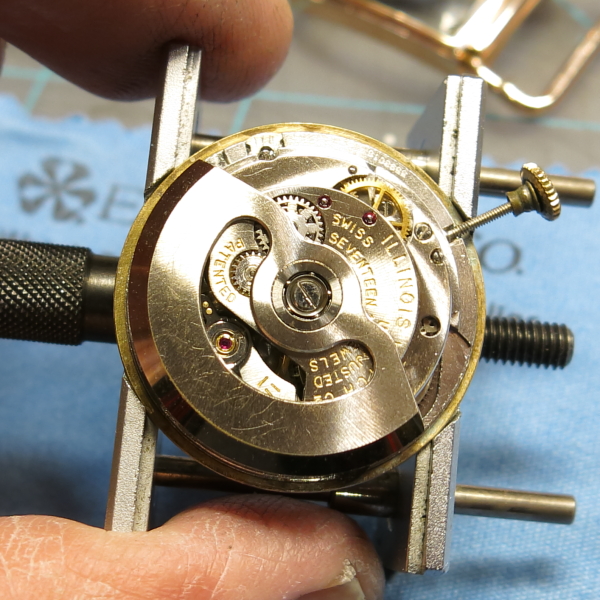 A new crystal and a nice alligator strap make a huge improvement to this Automatic A's appearance.  Now it looks as good as it runs. 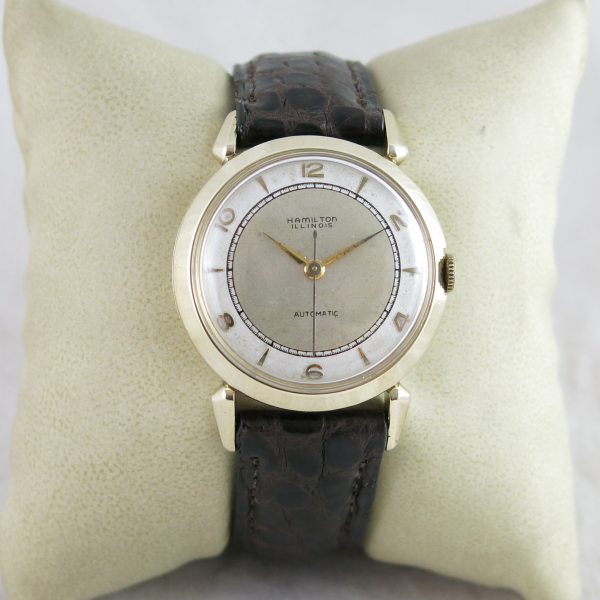