"Thin was in" in the early 1960's and many watch models took on sleek and elegant styling.  In fact, Hamilton had a full line-up of manual winding and automatic models with Swiss-made grades and "thin" case designs in the Thinline and Thin-o-matic series.   However, that didn't mean Lancaster didn't also produce thin models with US-made movements too.

I recently came upon a fairly obscure model that was a little hard to identify at first.  I thought for sure it would be a late 1960's Thinline model but the word SWISS was missing from the dial.  A little further investigation revealed it was a 1962 Whitford.

I knew it was a 1962 Whitford because it was only produced for a single year.  The model changed in 1963 to the Whitford B - I presume because the case design was changed to strengthen the lugs.  The B model was produced for two years.

The Whitford has a uniquely designed case that came in solid 14K white or yellow gold.  The lugs are attached at the center in an almost reverse "hidden lug" design.  I wouldn't be surprised if this design proved to be problematic and necessitated the change to the Whitford B case with traditional lugs.

Tucked inside the solid gold case is the 22 jewel US-made 770 movement.

As you can see below, my project watch further exemplifies what's depicted in the catalogs.  The bezel is engraved with a florentine finish and the applied hour markers at 12, 3 6 and 9 echo the same finish.  The lugs on my watch appear to have expanded a bit but I should be able to reshape them. 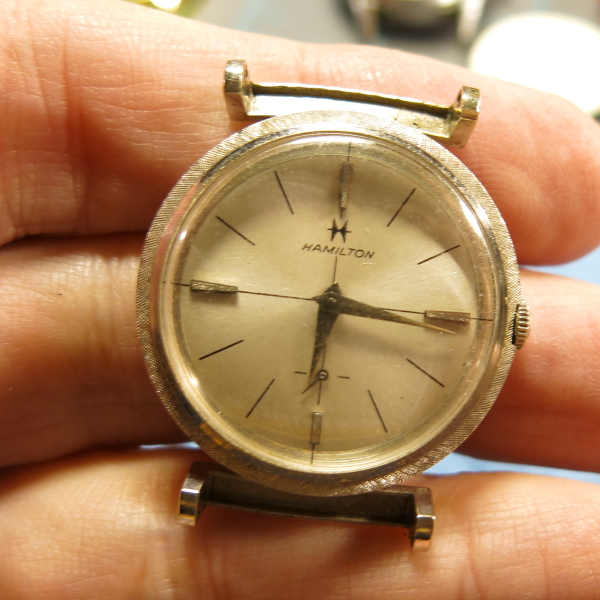 Looking at the back of the watch, it's easy to see why the lugs could be a challenge.  Notice the case back says HAMILTON.  You will often see white gold watches on eBay that lack this detail and that's a good sign the watch is not an authentic model.  If you don't see Hamilton on the case back, you'll definitely want to see the inside of the case back before you decide to purchase - otherwise "buyer beware". 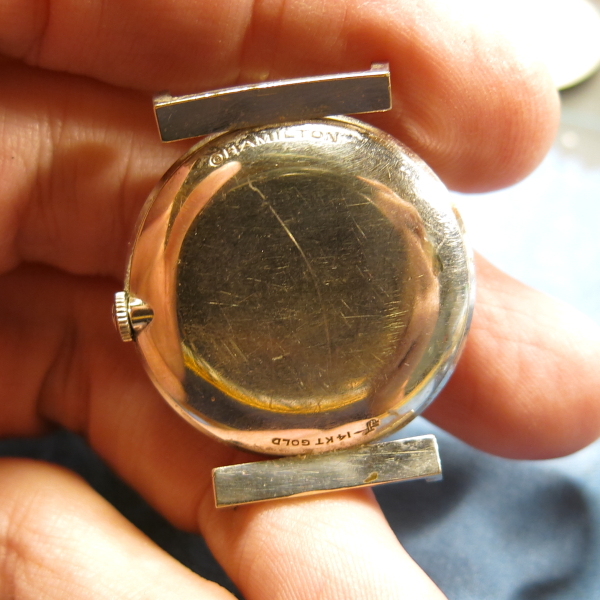 I had to look very closely all the way around the perimeter of the case to see how it separated.  Initially I thought it might open through the crystal.  With the bezel out of the way you can see the dial has a silver band around the outside circumference.  It has a little corrosion from the case but it's not visible when the bezel is in place. 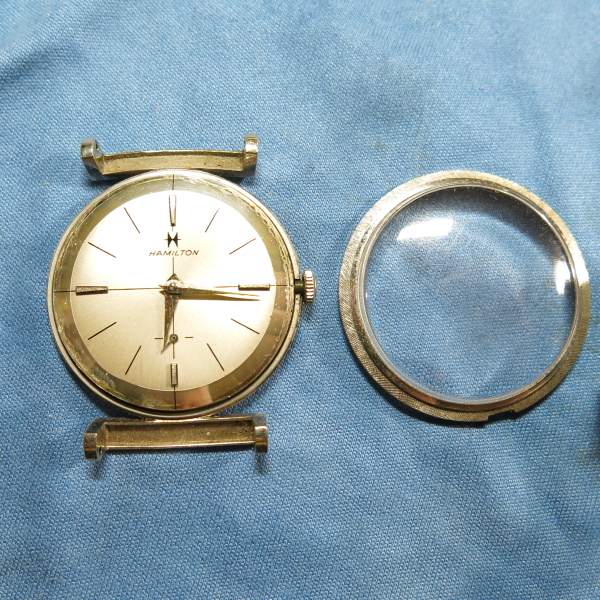 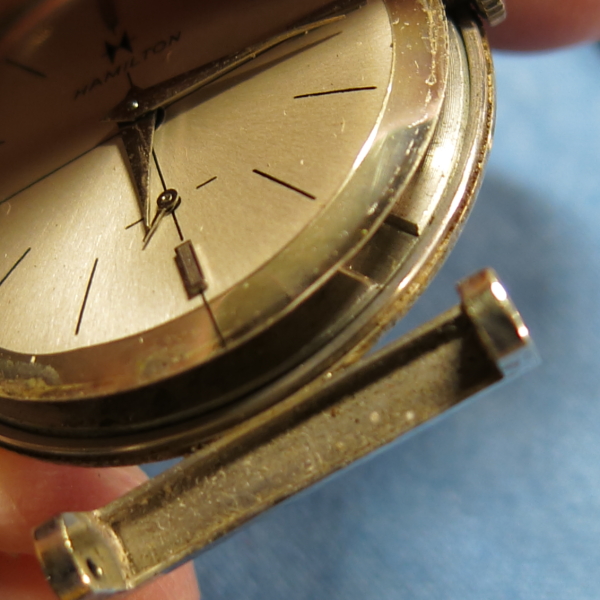 Based on the dull haze on the movement, it's been a while since this watch was cleaned. 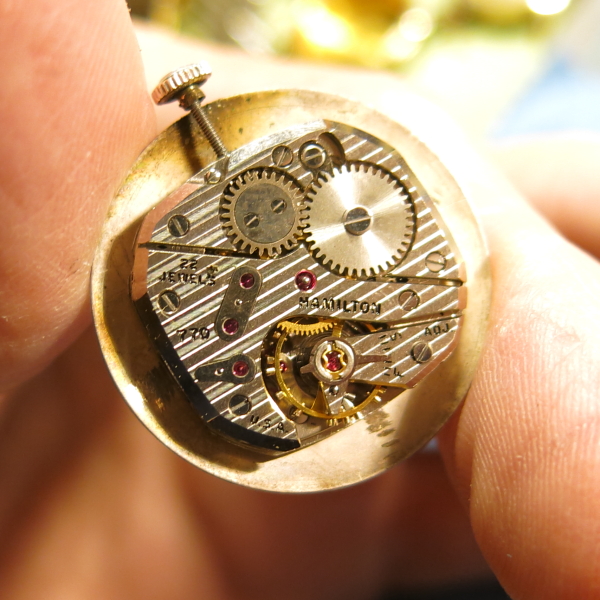 Looking at the inside of the case back, I don't see any watchmaker's marks.  I wonder if I'm the first person to service this watch in the past 55 years? Everything is disassembled and thoroughly cleaned. 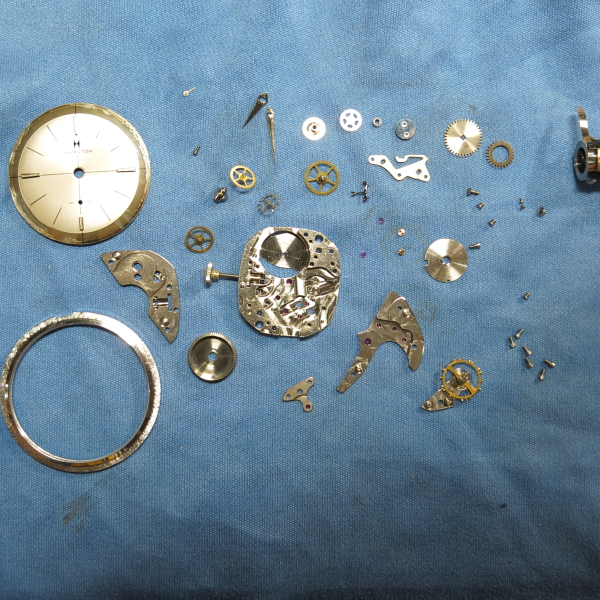 The reassembled movement is definitely brighter and more sparkly after a trip to the spa. 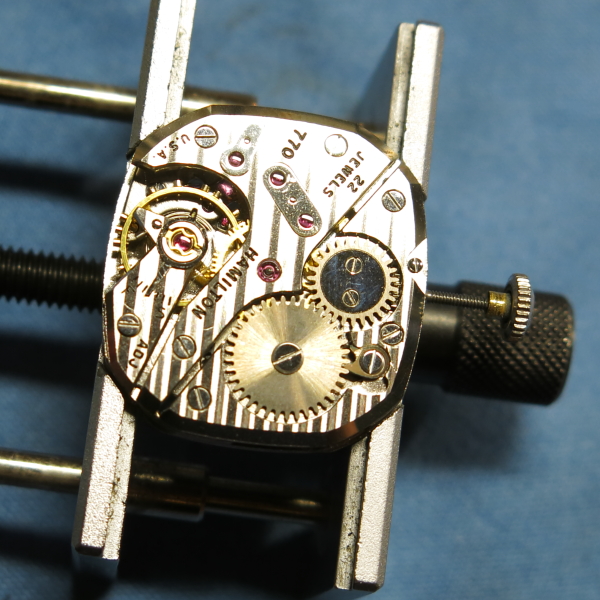 Well... it's keeping good time but the beat error of 4.2ms is a bit too high for my tastes.  The beat error is a measure of how well centered the balance wheel is with the pallet fork.  To be perfectly "in beat" the balance should be centered so that it swings the same distance to each side.  If it's not centered, it will swing a little further to one side than the other and eventually the watch will stop a little sooner than if it would if it was better centered. 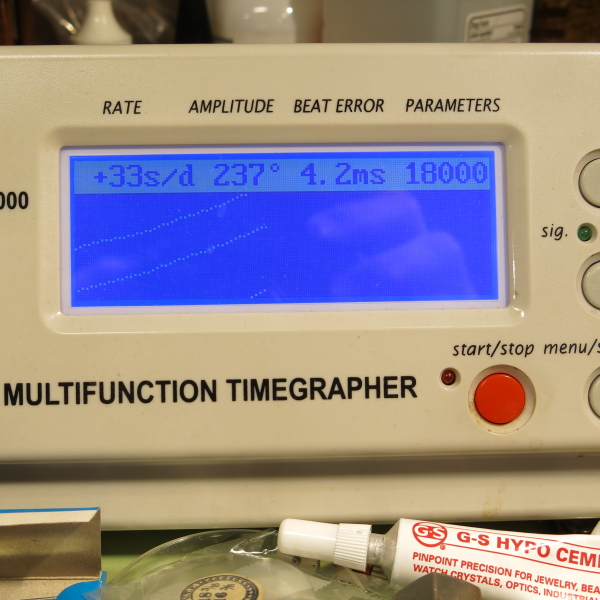 Adjusting the beat error on a watch like this requires removing the balance from the balance cock and moving the hairspring collet in the right direction and the correct amount.  If that sounds challenging... it is.  Is also a great way to screw up a decently running watch.

My first attempt to adjust the beat error was a good guess.  I cut it almost in half.  Had this been the performance when I started I would probably have left it as is.  My personal upper spec for beat error is 3.0ms, unless it has a moveable hairspring stud.  I guess I've made it this far, why not try to go a little further? 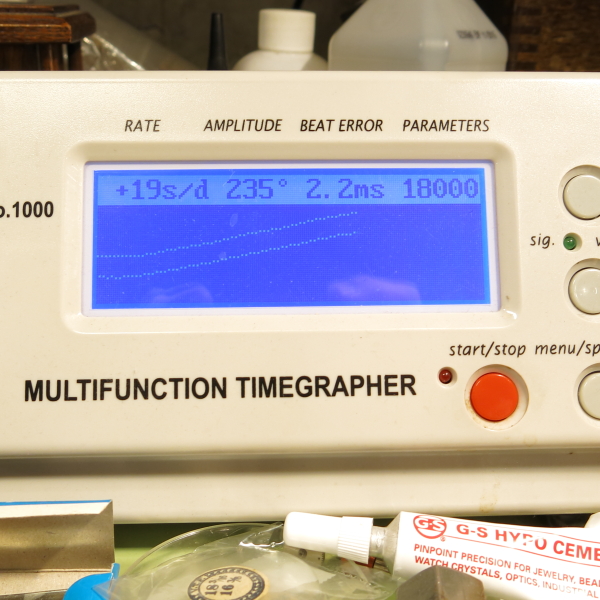 Third time's a charm... it doesn't get better than this.  I'll leave the watch running a little fast as it settles back in. 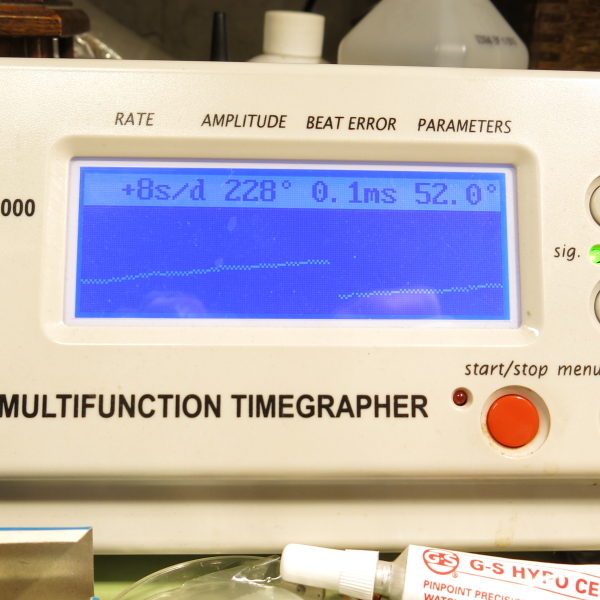 Wow!  This watch turned out fantastic.  It's amazing what a new crystal will do to improve the looks of a watch.  But the straightened lugs and a fresh strap help a lot too.  I think the lugs are bent down (as if to follow the contour of the wrist).  Based on the catalog depiction they probably would have been flatter but I don't want to risk breaking one off by trying to reset it. 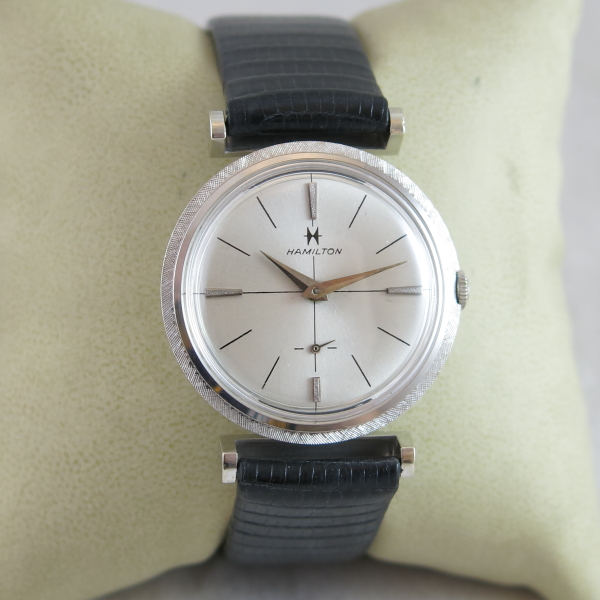