The watch industry was in turmoil in the 1950's.  Post WWII European countries were producing high quality watches at price points that were difficult for American watch companies to compete with.  The Great Depression had already taken out a number of the early American watch companies and the remaining producers like Benrus, Elgin, Waltham and Hamilton were struggling to compete.

For example, Waltham Watch Company, one of the first American watch companies and founded in 1850, went out of business in 1957 but not without first forming a Swiss subsidiary called Waltham International SA, which carried on and retained the right to the Waltham trade name outside of the United States.

Hamilton was not immune to the industry pressures and in 1953 it reintroduced the Illinois brand that it had acquired when it purchased the Illinois Watch Company in 1928.  Illinois Watch Company was another premier watch manufacturer and the brand still retained some panache with buyers in the early 1950s.  The introduction of Illinois watches allowed Hamilton executives to test the use of Swiss-made ébauche movements in the Hamilton line up and assess if all hell would break loose.

Other brands like Elgin, Benrus, etc. had already gone down the Swiss-made route but Hamilton was regarded as a step above those other brands... at least by Hamilton executives and many of their customers.

Today's Illinois collectors turn up their noses at the Illinois branded watches of the early 1950s.  There's good reason, as there's nothing in common between the 1950's Illinois models and the pre-1930 Illinois watches other than the name on the dial.

I think the Hamilton Illinois models are as much a part of Hamilton's heritage and any other development of their evolution.  Are the Explorer Series of the Hamiltons from the early 1930's any less Hamilton because the Hamilton 401 is essentially an Illinois 207 movement?  To turn up your nose at a Hamilton with a Swiss-made movement would require ignoring every automatic in Hamilton's lineup and that would be... well... stupid.

That said, Hamilton Illinois models aren't always that attractive.  I suppose you could say they are the "8th grade school pictures" of what would eventually become late bloomers in the Hamilton model line.

Take for example the 1953 Topper B.  It was introduced along with another model, the Topper A and was produced for three years. 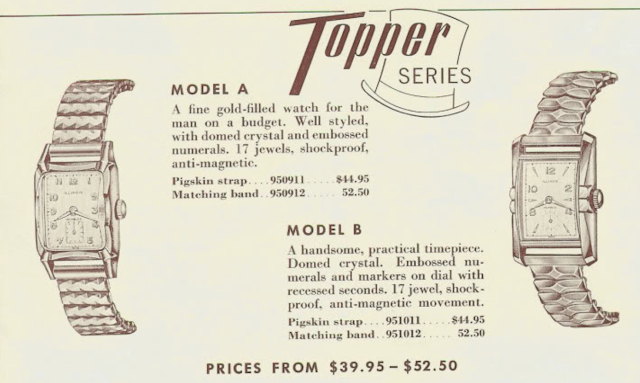 The Topper Model B is a typical entry-level Hamilton model with an embossed dial (something Hamilton never did until the Illinois line).  The case on the Topper B is gold filled, although eventually rolled gold plated cases with stainless steel backs would be used on other models to trim a few bucks.

My Topper B project watch arrived in typical project-watch condition... a little dirty but running and in need of a trip to the spa. 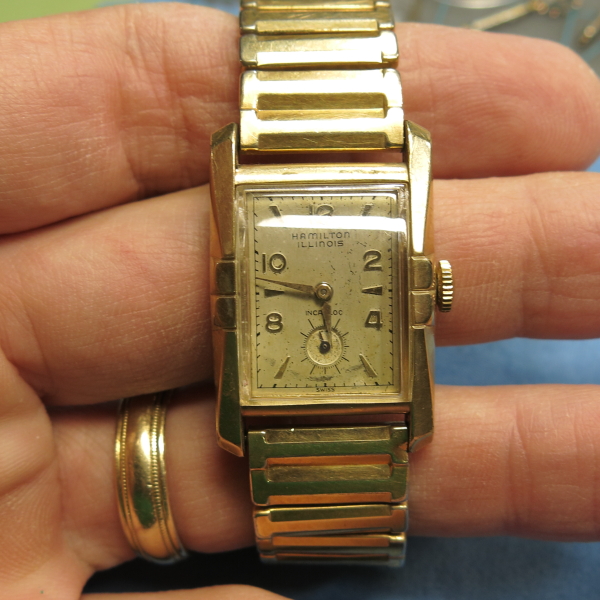 The bracelet on the watch is a JB Champion and is period correct but not correct for the Topper B.  I wouldn't be surprised if it was used on another Hamilton model so I'll save it for a rainy day. 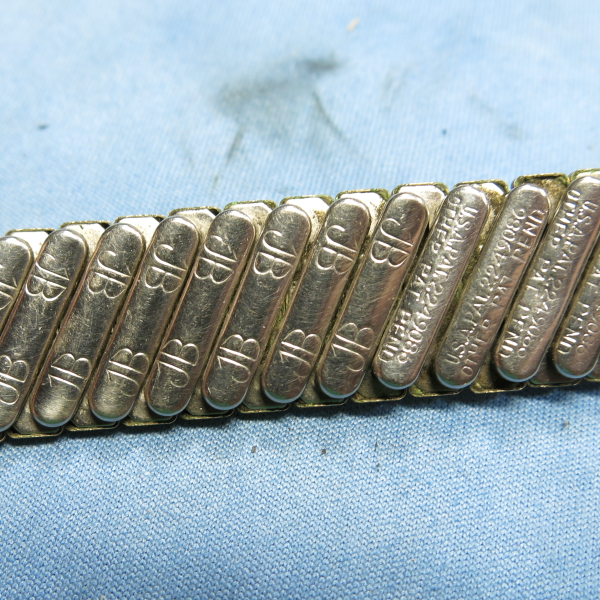 The model number for the watch is 9510 and stamped clearly on the case back. 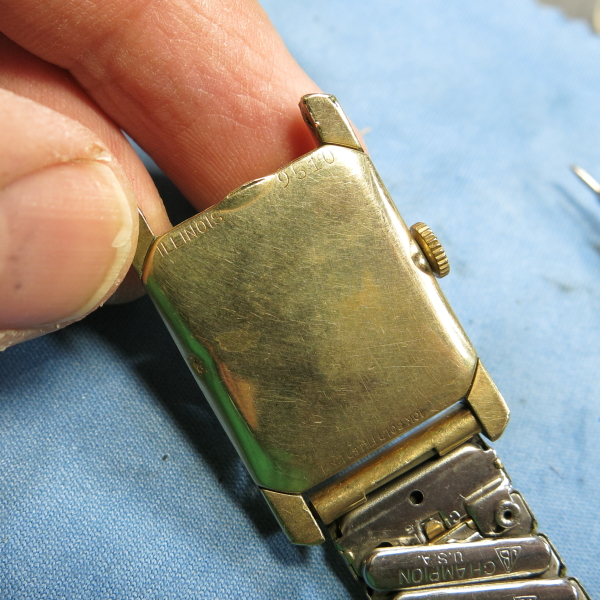 The embossed dial is probably the least impressive aspect of this watch.  You just don't see this basic type of dial on a Hamilton made before 1955.  After 1955 is a different story. 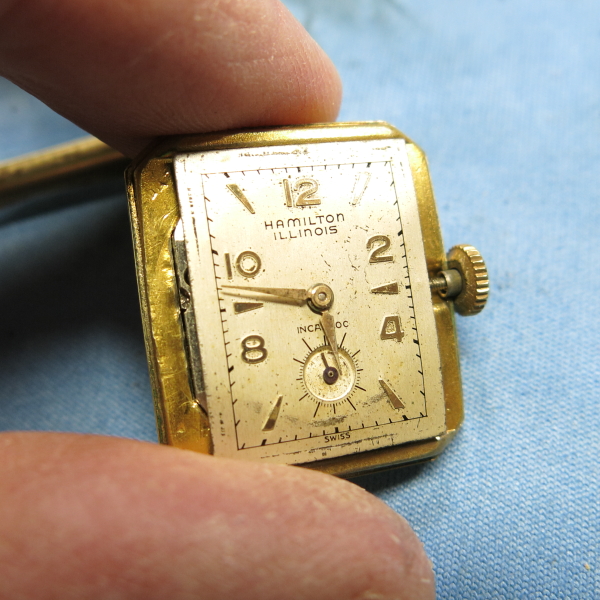 Someone in the past crudely attempted to do something to the case back.  There's a slight dent on the outside so maybe this is evidence of an attempt to remove the dent?  Who knows... we all have our scars, right? 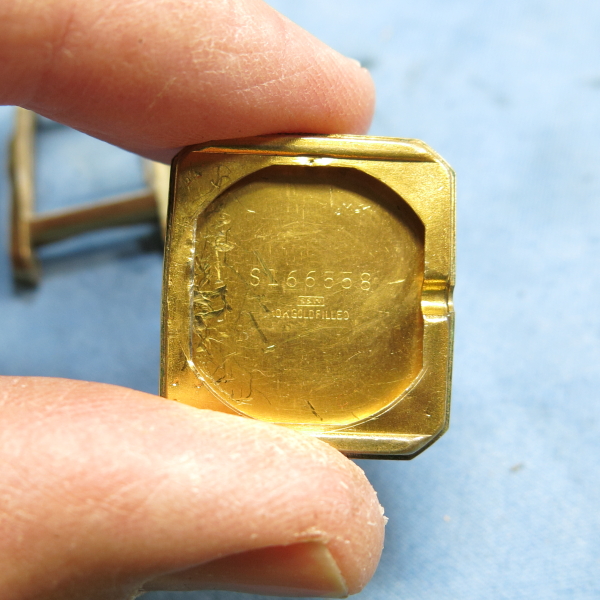 Illinois movements had no unique names.  A lot of people misidentify an Illinois movement as a "TXD", as that's what's on the balance cock and a lot of other brands used letters to identify grades.  But every Illinois-branded Swiss-made movement has TXD on it because that's the import code for Illinois.  You will see "HYL" on all the Hamilton-branded Swiss made movements through 1969. 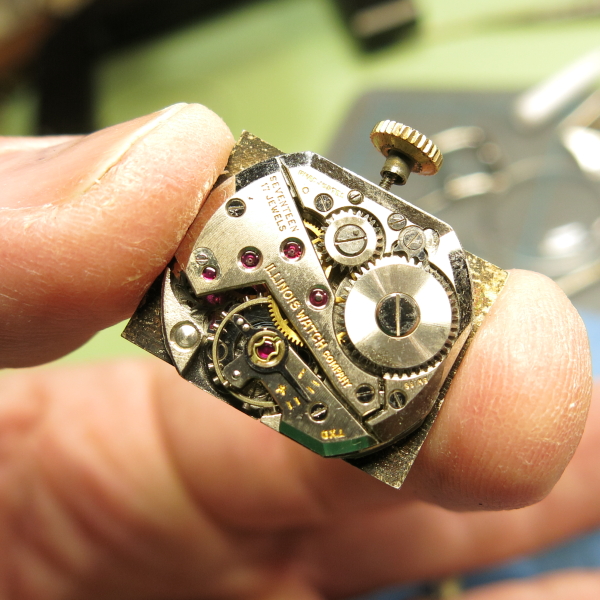 Once the parts are removed you can see the main plate is stamped with the ETA shield and 1220 so this is an ETA 1220 movement - in case I need to find any parts. 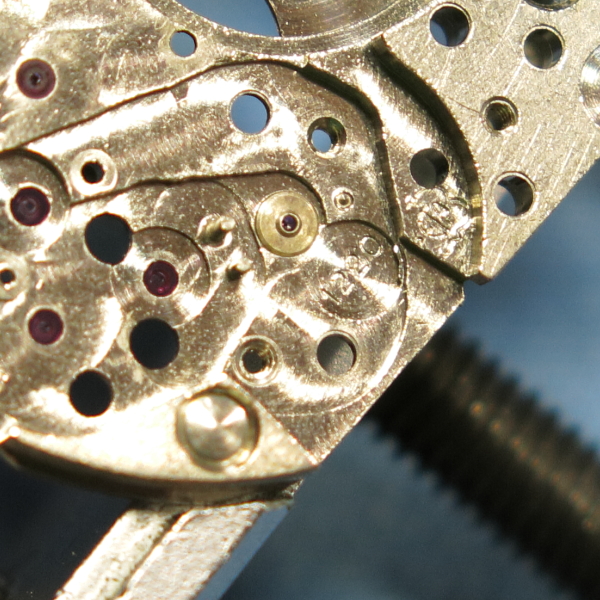 The crystal is a cylinder style and although it's scratch-free, it does have some cracks on the side so I will replace it. 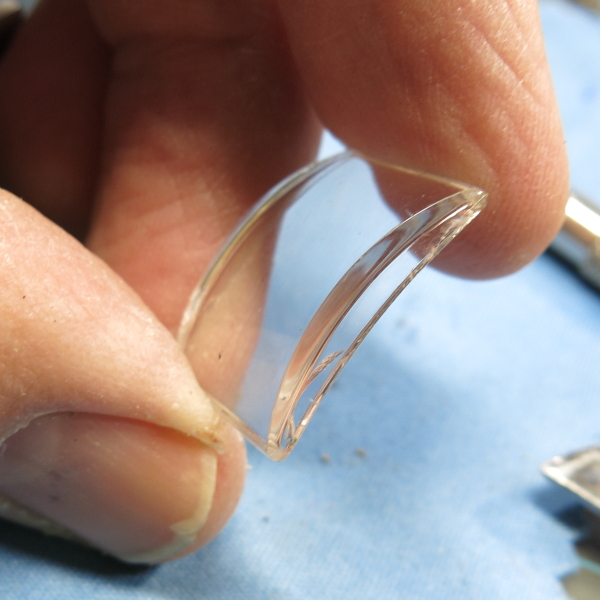 I think I've got the correct crystal - it even says Hamilton on it. 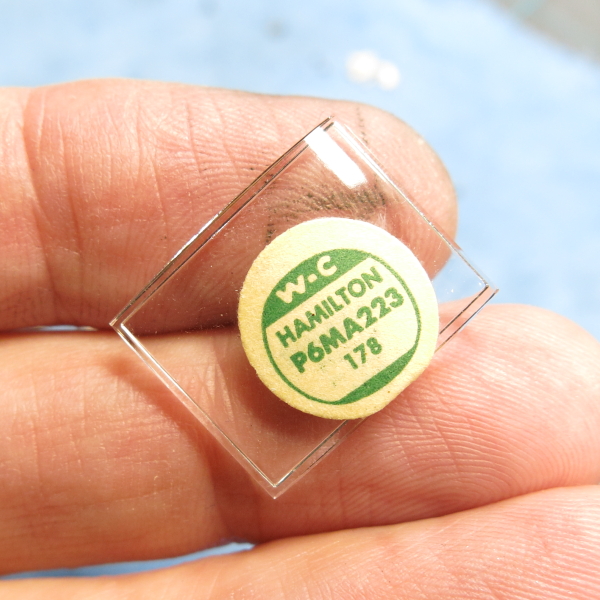 It took about 30 minutes of sanding the crystal before I realized the contour of the curve on the side of my new crystal isn't deep enough to match the curve of the case.  So it rock in the bezel like a see-saw.  I'll need to find a better fitting crystal option.  I'll reinstall the old one in the meantime. 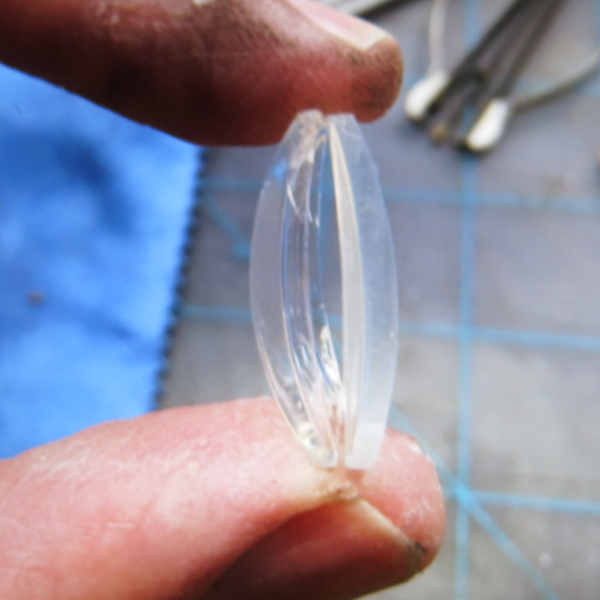 Everything is cleaned and dried.  I'm in the home stretch. 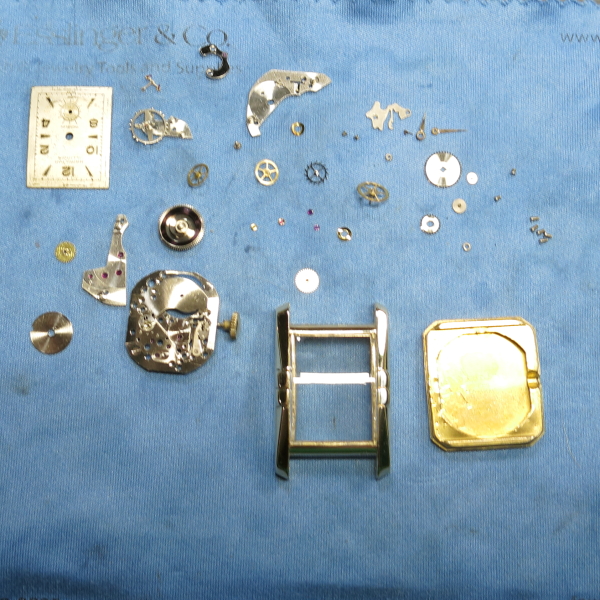 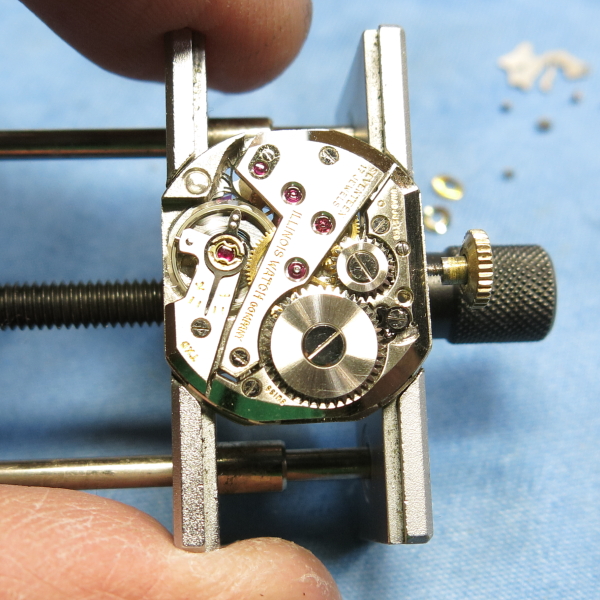 Something is making a little extra noise inside based on the occasional specks showing up below the main signal trace.  It doesn't take much ... any tiny spec of dust or fiber in the wrong place can be detected. 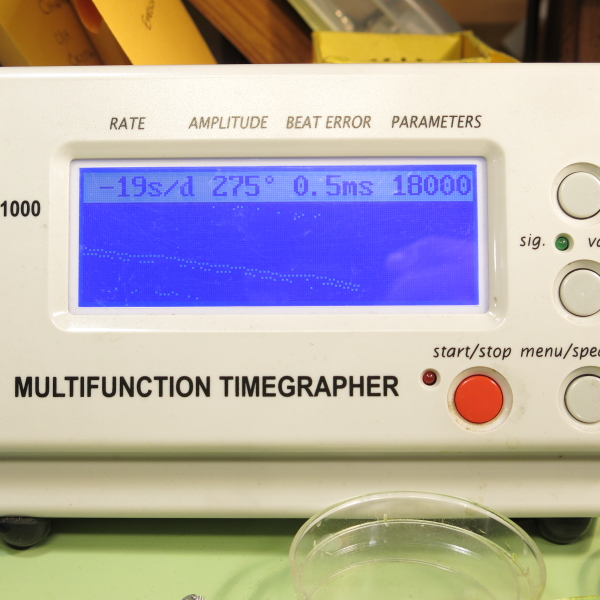 There... did I find anything?  Not really but a little toot of compressed air here and there can make a big difference. 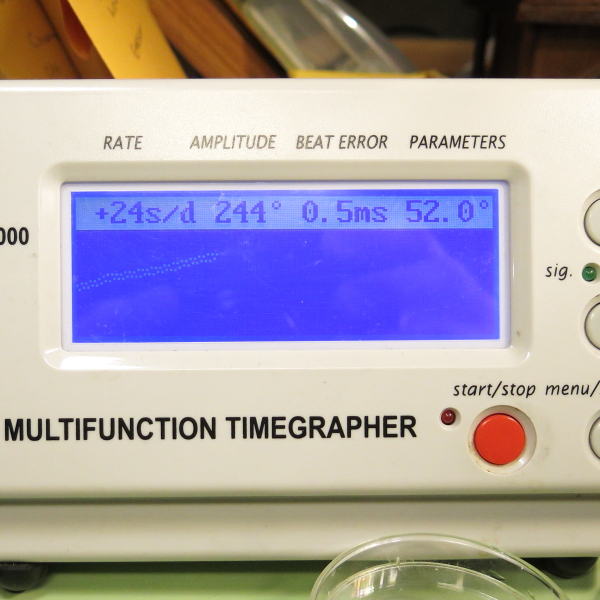 The Topper B is not a bad looking watch in my opinion.  It's a little on the feminine side, mainly because it's smallish but if it didn't have an embossed dial you could argue that it looks like a typical 1930's tank-style watch.  Now to find a proper-fitting crystal. 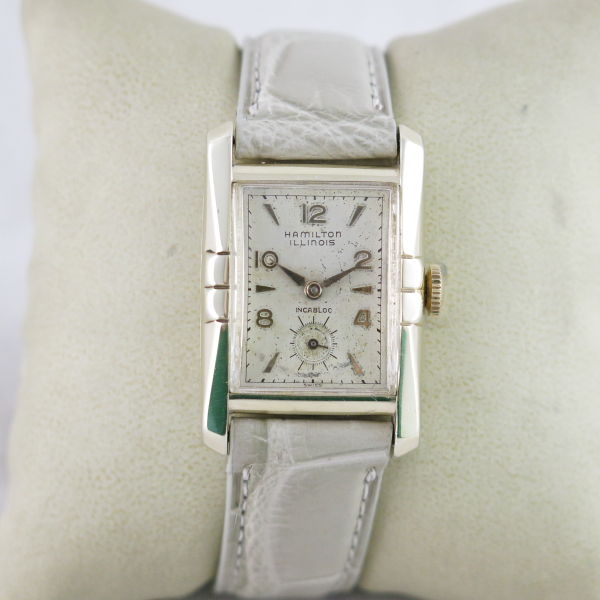 I found the correct crystal, in case you're looking for one too.  It's the same dimension but a little more curved on the inside surface to accommodate the bezel shape. 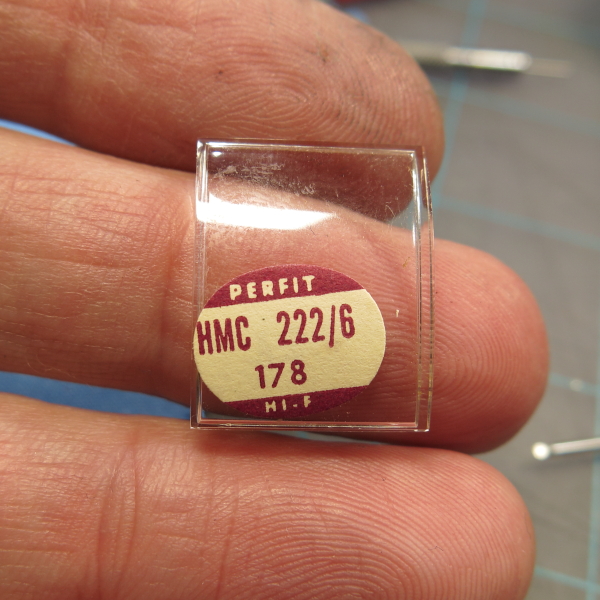