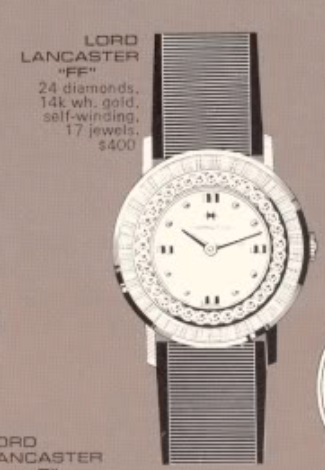 If it looks familiar, it's very similar to the Lord Lancaster G, although that model was not an automatic and had a 687 movement used in Thinline models. 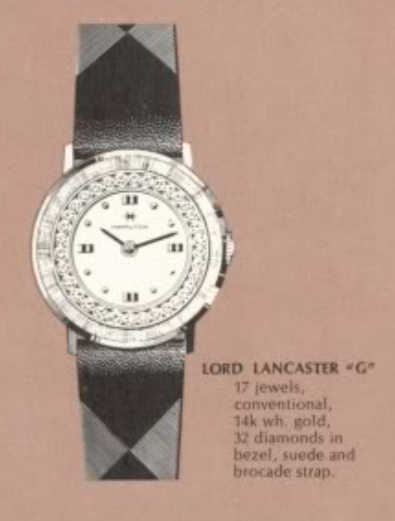 Both the FF and the G model featured 14K white gold cases.  The G model has 32 diamonds surrounding the crystal opening while the FF model features 24, presumably larger diamonds.  Both models came on unique suede straps.

My project watch came courtesy of  a fellow collector who recently purchased a Lord Lancaster FF he spotted for sale.  You don't tend to see this model very often so he jumped on it.  It doesn't have it's original strap but it is presented on a solid 14K white metal strap.  The bezel features a florentine-style finish and this watch's bezel is a little smooth along the outside perimeter so I will not attempt to polish the case at all.  That way I won't risk losing any more of the finish, even though the case is solid gold. 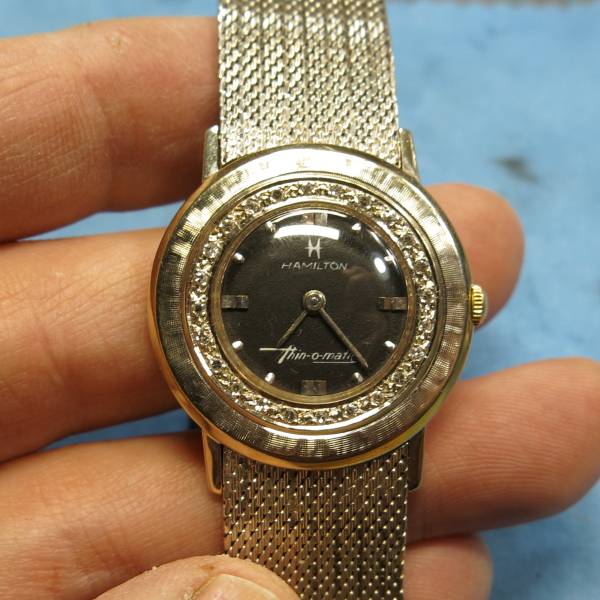 I have found that sometimes white gold cases have a slightly yellow cast to them.  However, this watch has a yellow crown on it and it definitely doesn't belong there, although it does have a Hamilton logo. 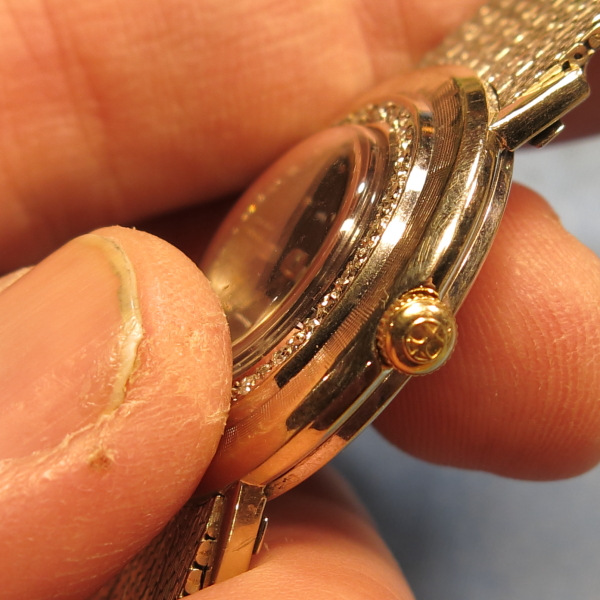 The case is a two-piece design and the two pieces separate in the middle. 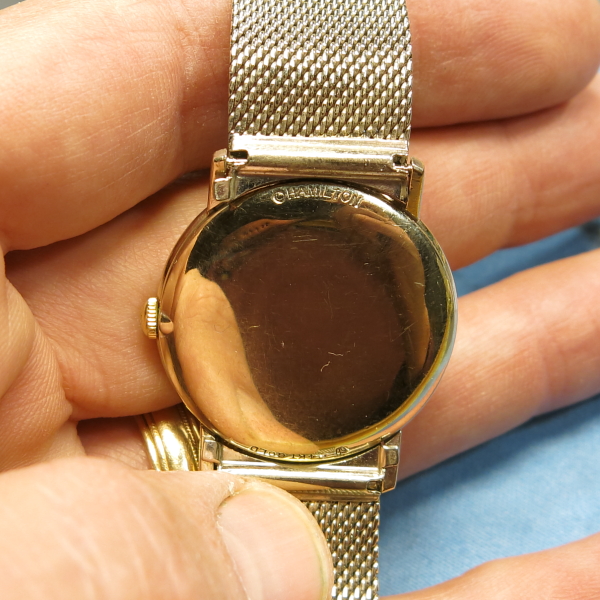 The buckle on the metal strap is stamped 14K Italy. 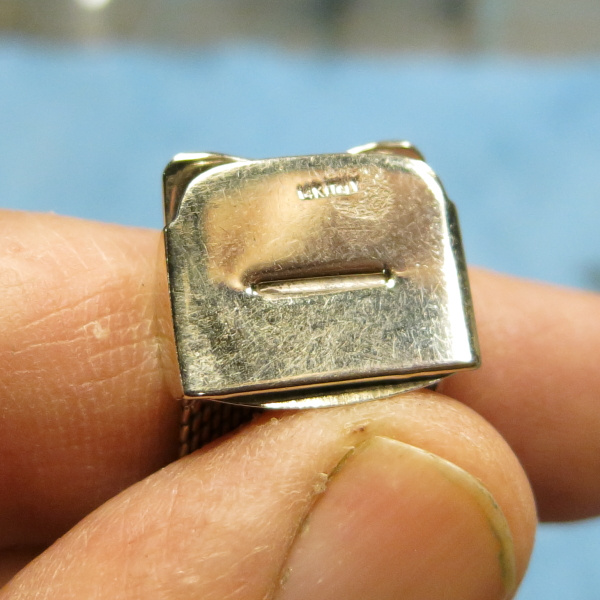 The catalog doesn't make mention of a black dial and I would say this dial has been somewhat crudely refinished.  The part that is visible inside the bezel is only about the size of a dime so it doesn't really look too bad. There are a few watchmaker's marks inside the case back so this watch has been serviced several times in the last 50 years.  The lower number is the model number.  It ends with 68, indicating the year the model was introduced. 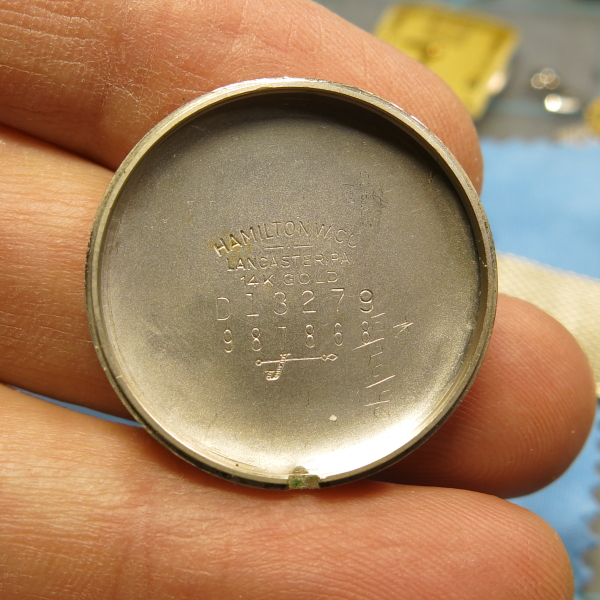 This watch says it's running 425 seconds per day slow but the beat rate of 25,200 is way higher than the 19,800 it should be.  So this watch is actually running very fast. 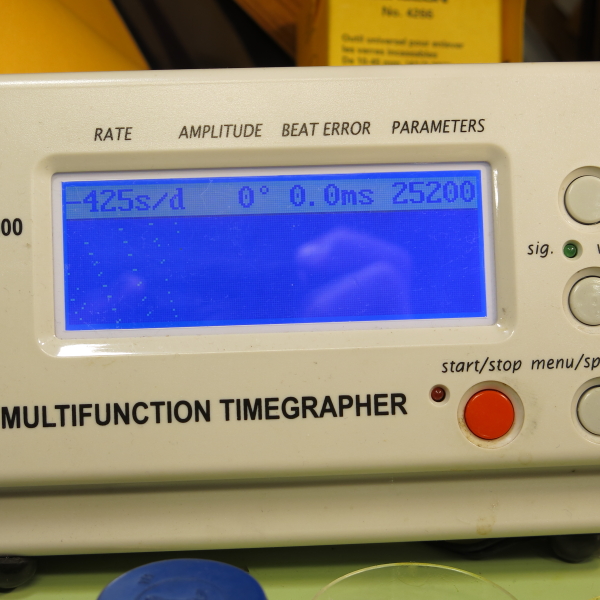 The movement inside is a Hamilton 626 micro rotor movement and I can tell by the shape of the hairspring that several coils are sticking together and making the watch run fast.  Hopefully I'll be able to clean it up so it will run correctly. 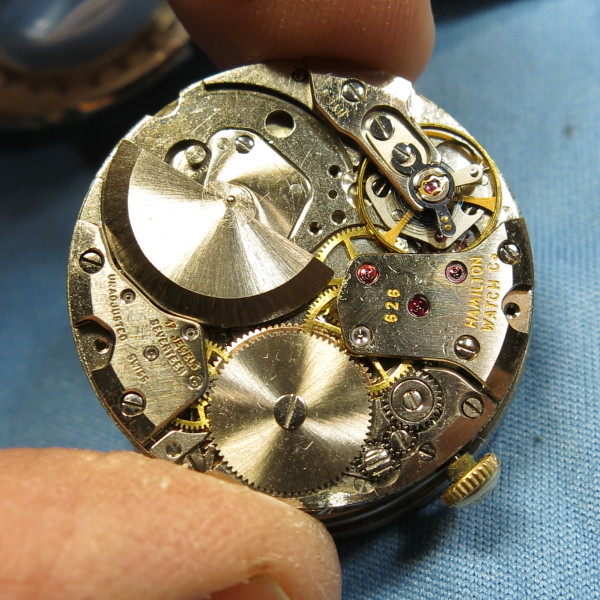 Based on the dial-side of the movement, I can see that it's been a long time since this watch was cleaned. 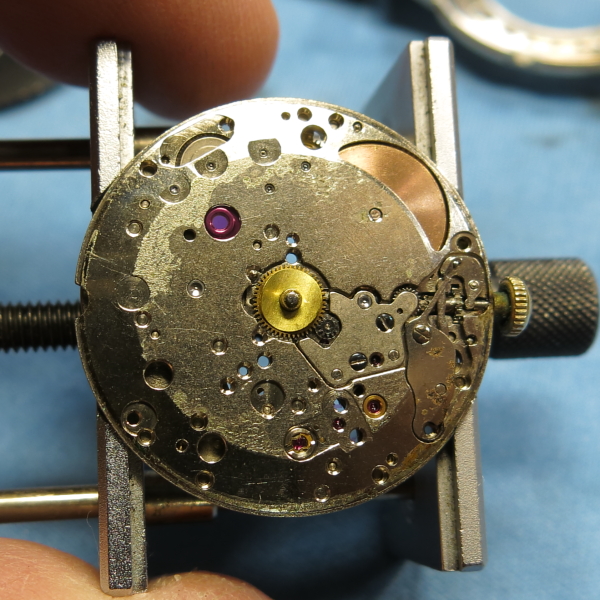 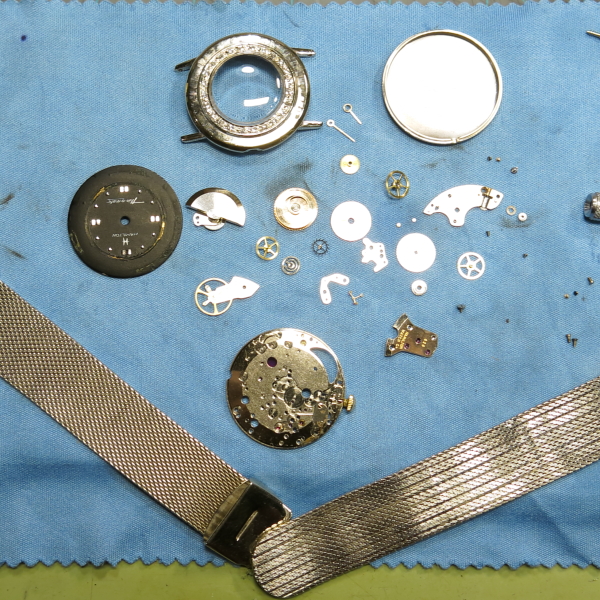 I had a 20 minute "rain delay" while I looked for this blasted click spring.  I accidentally touched it the wrong way and it flew off.  I eventually found it but I had to clean my entire workbench to locate it.  This is why you never do this sort of thing over carpet or a similar soft surface. 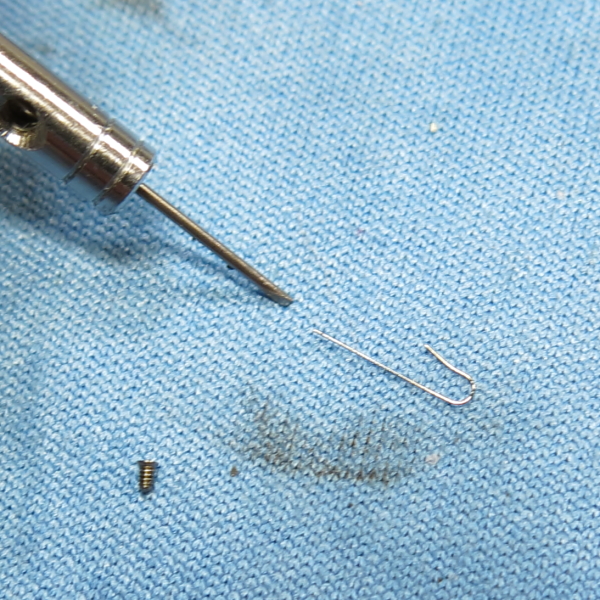 The movement is back together and running with good motion.  The shape of the hairspring looks good so I'm optimistic. 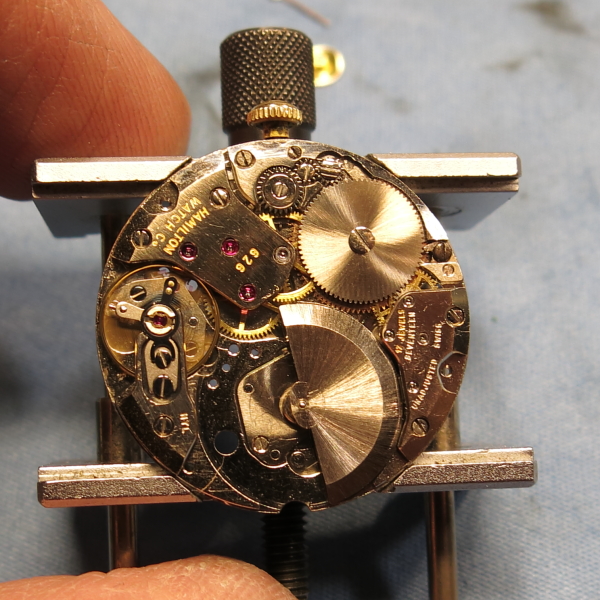 It's running a little slow but otherwise it's looking promising. There's a little extraneous noise inside, maybe a filament of dust in the wrong place. 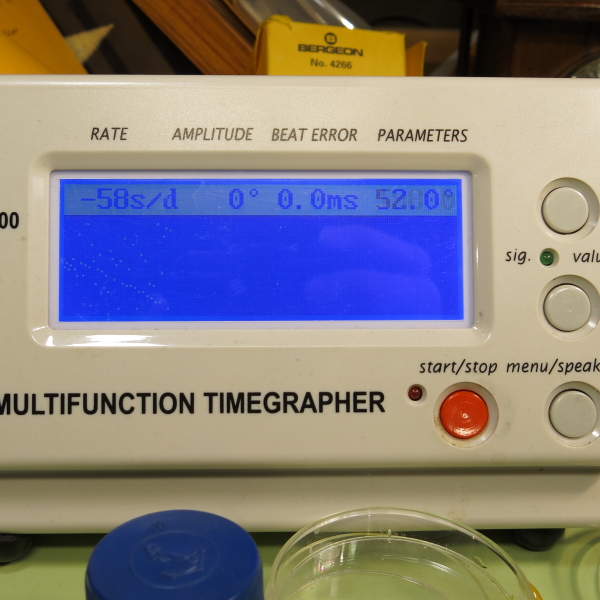 Alright - this will do for now. 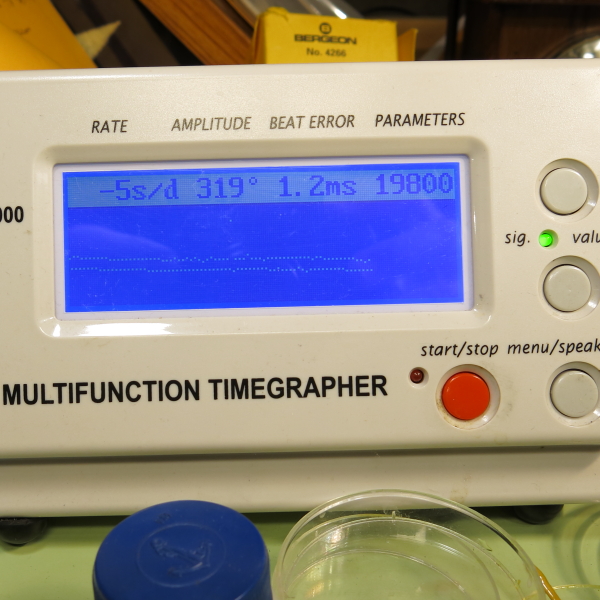 With it all put back together this watch is looking very good.  Personally I think the metal strap is a bit much and I think a black strap would look better.  I hate this type of micro rotor movement because it has an offset center wheel and they're notorious for having loose cannon pinions that are almost impossible to fix.  Hopefully this watch will run correctly... time will tell. 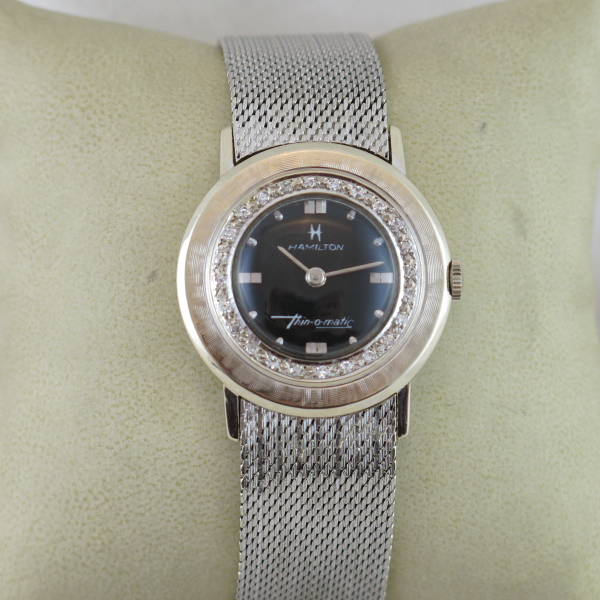