One of the interesting Hamilton things to collect are buckles for original straps.  Hamilton used different styles of buckles over the years and they came in all sorts of materials, including platinum.  You will see them in gold filled but also solid 14K and 10K gold, depending on the models they were used on.

I recently did a project for someone who rescued a family heirloom from a fire.  The watch was a 1954 Spencer.  The model was introduced in 1950 and made for four years. 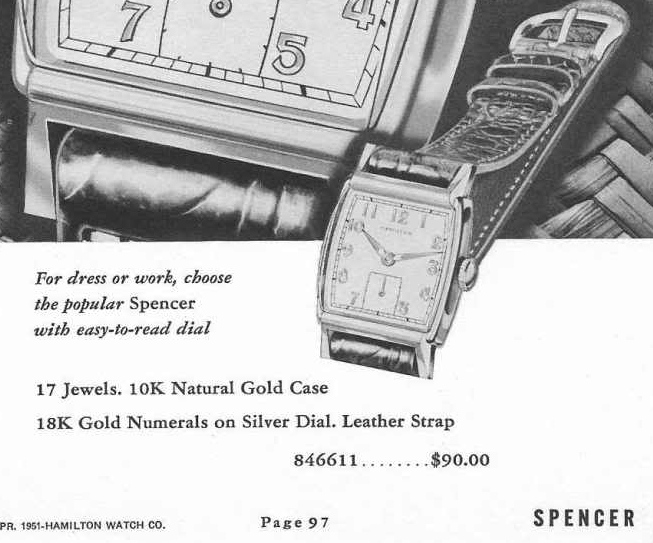 The Spencer came in a solid 10K yellow gold case with a white-finished sterling silver dial with solid 18K yellow gold numerals.  Tucked inside is an 8/0 sized 17 jewel 747 movement made in Lancaster, PA.

I thought I had already done a Spencer before so I neglected to take photos of the overhaul.  However, the watch was in great shape overall and still had it's original crocodile strap.   I suspect the crystal was replaced at some point as there was a little crystal glue stuck to the dial and when I opened the case some of the finish on the dial came off.  Fortunately it wasn't a complete disaster but it's still a little noticeable between the 8 and 9.  You definitely want to make sure crystal glue is dry before you reassemble the case. 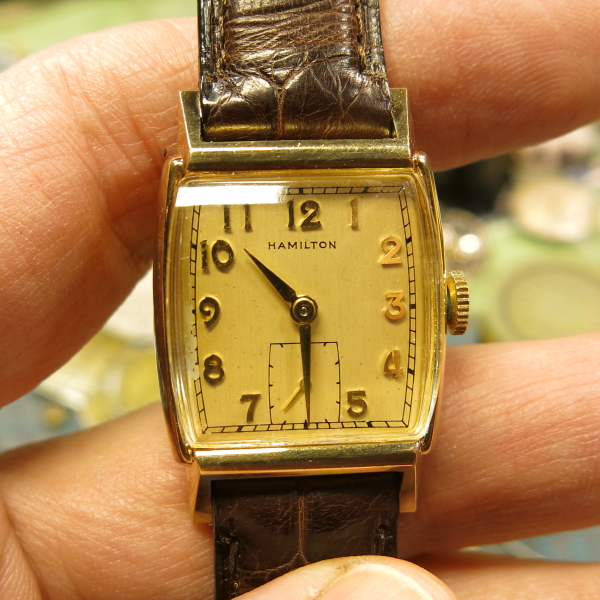 The back of this watch was nicely engraved with the initials of the original owner.  He had received it for his Confirmation - and obviously took excellent care of the watch. 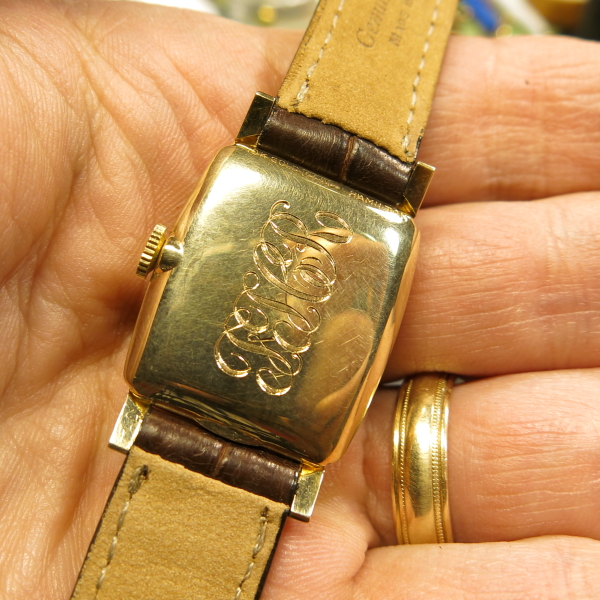 The strap that came with the watch still had it's original Hamilton 10K buckle.  I wonder how many solid gold buckles have been tossed with their old worn out straps? 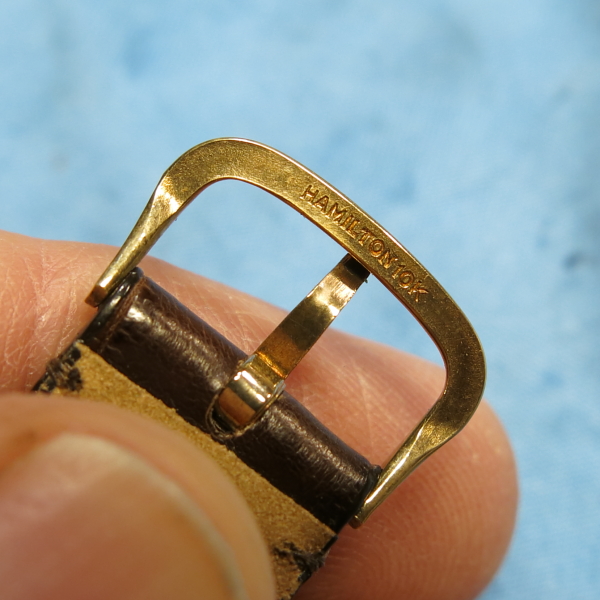 This 747 sparkles after it's trip to the spa.  The 747 is probably my favorite Hamilton movement.  It's very well made and easy to reassemble.  The 730 is arguably even better, since it has a shock protected balance.  They are otherwise identical. 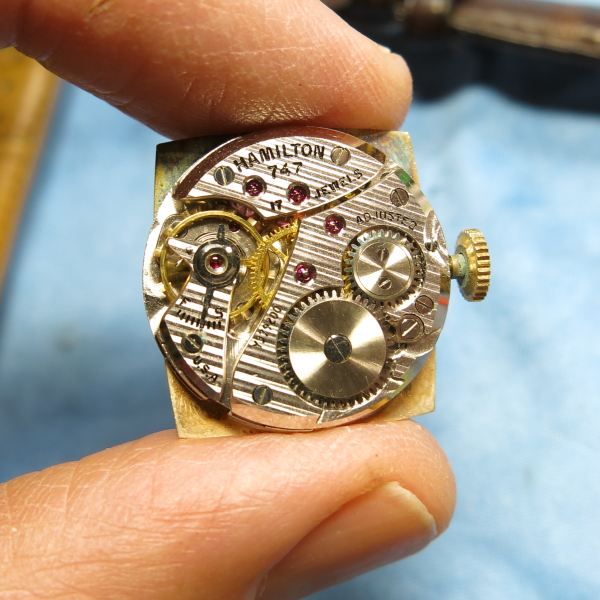 Watches in the 1950's often had their model name stamped into the inside of the case back. 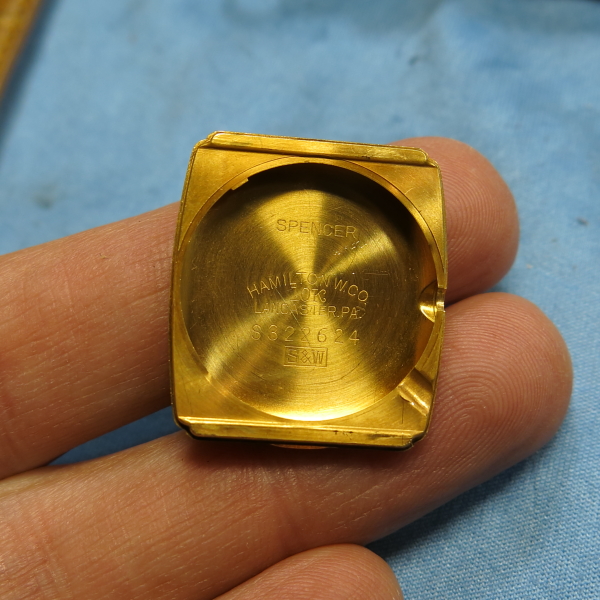 A new genuine alligator strap in brown is an excellent replacement for the original gator strap.  This watch looks almost as good as new, except for the minute track by the 8 and 9.  Oh well, it could be refinished to look like new but the nice warm yellow patina on the dial is hard to beat. 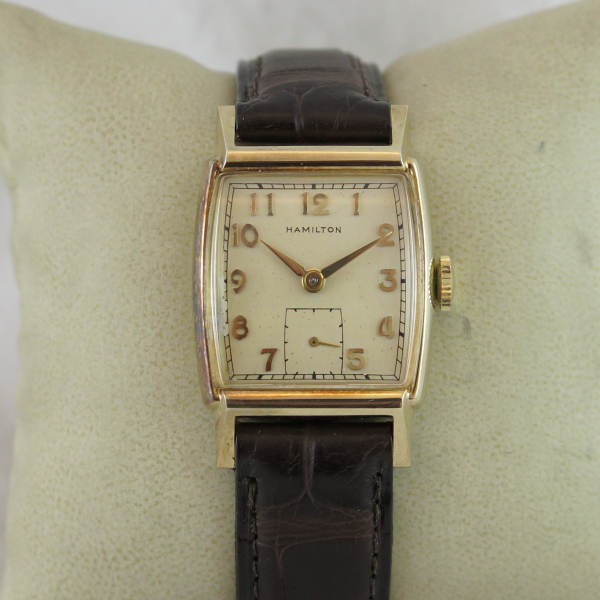